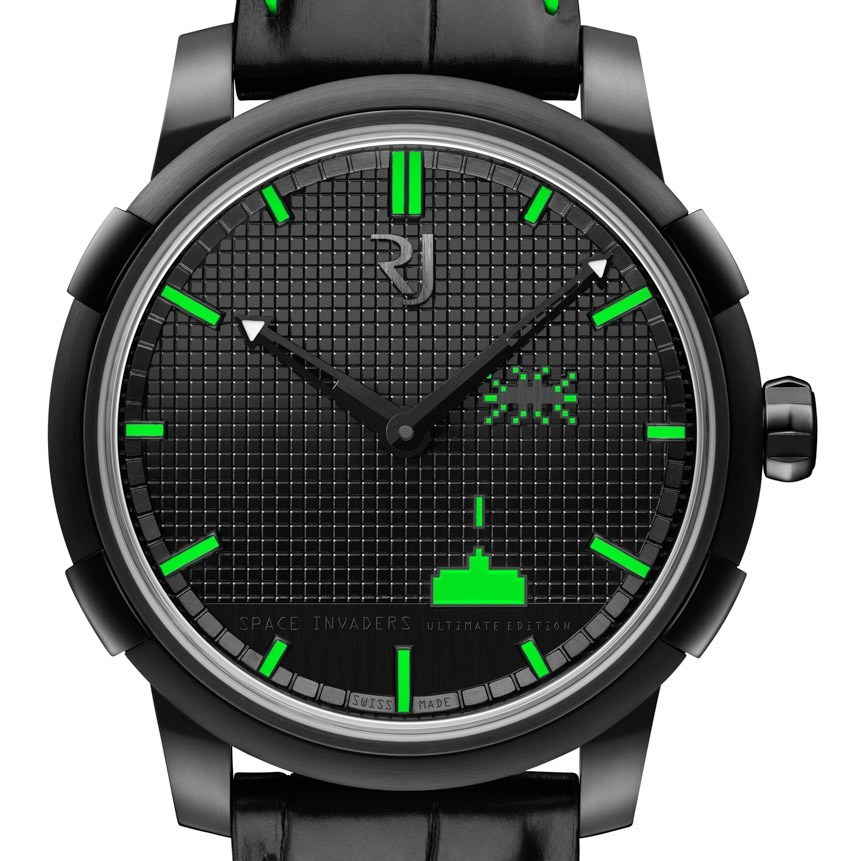 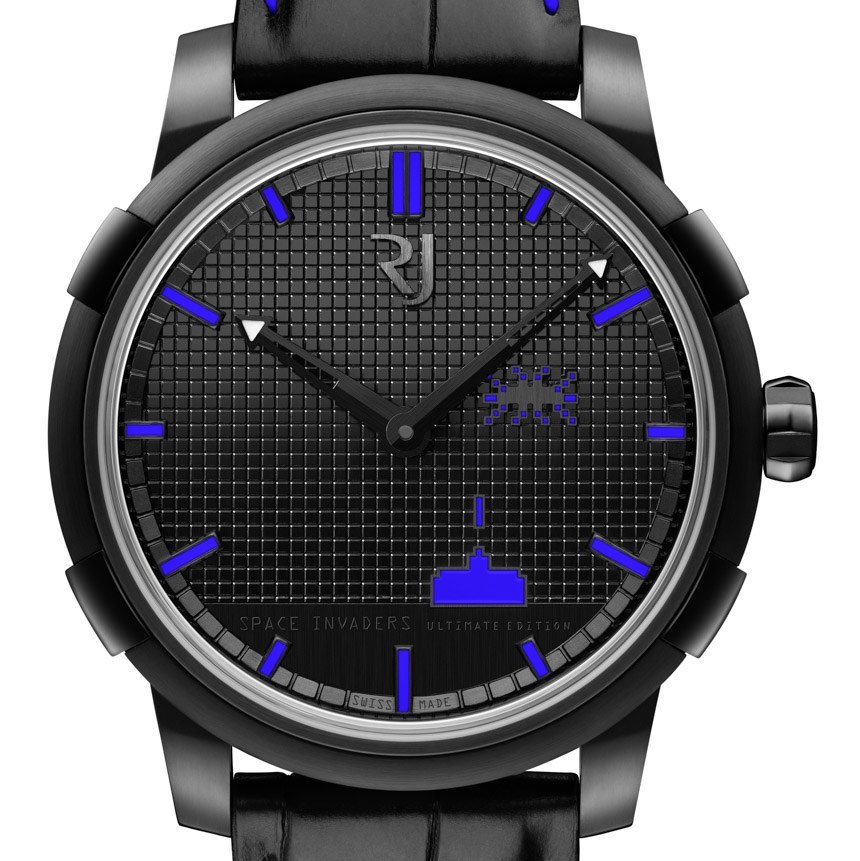 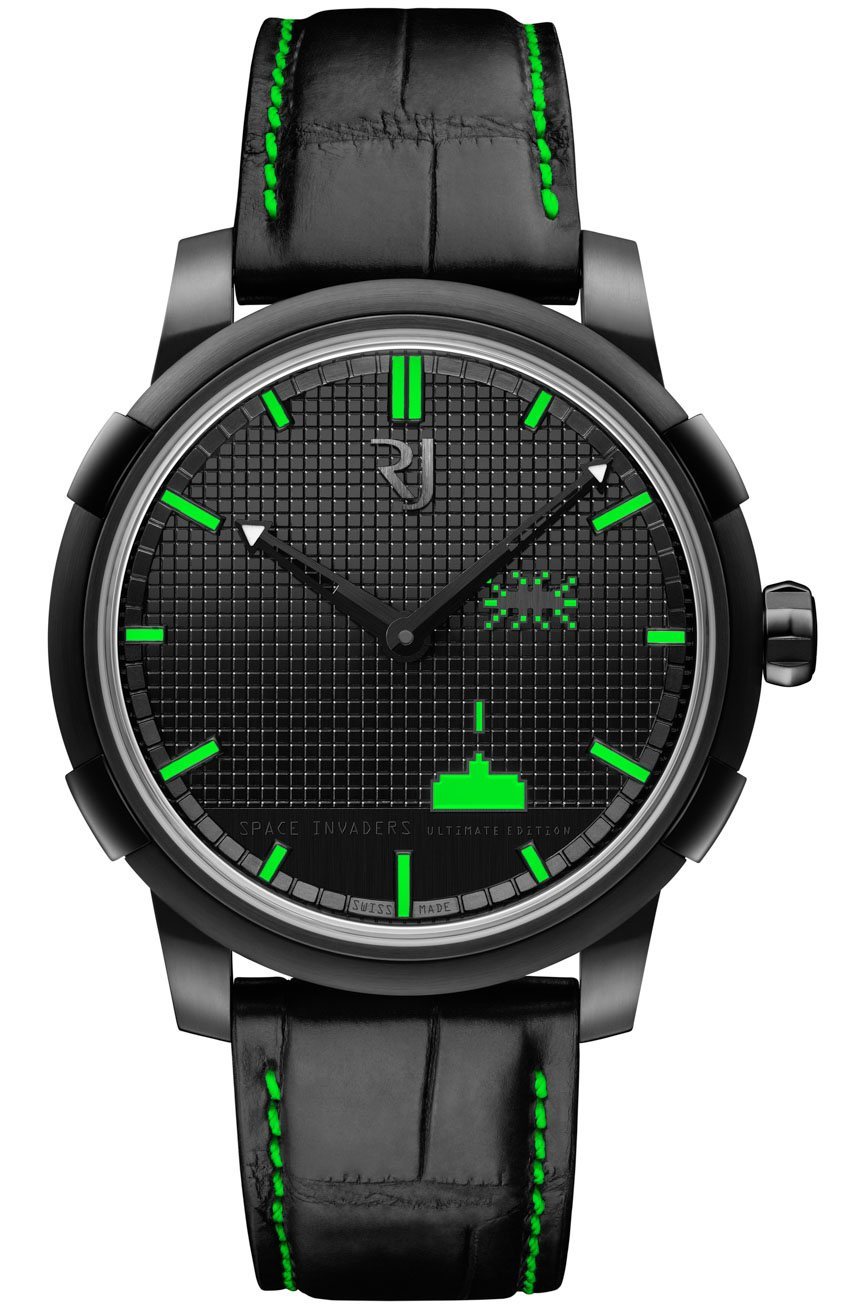 There are other watches, even by Romain Jerome, that try to in one way or another perpetuate a historically relevant and inimitable moment – such as the landing on the moon, the first ever powered flight, the fall of the Berlin wall, etc. Here that inimitable moment is that of the last “Alien Invader” being destroyed by the “laser cannon” – a more easy-going take on what, over the past nearly forty years, must have been an important moment to who knows how many Space Invader geeks trying to reach the final level. 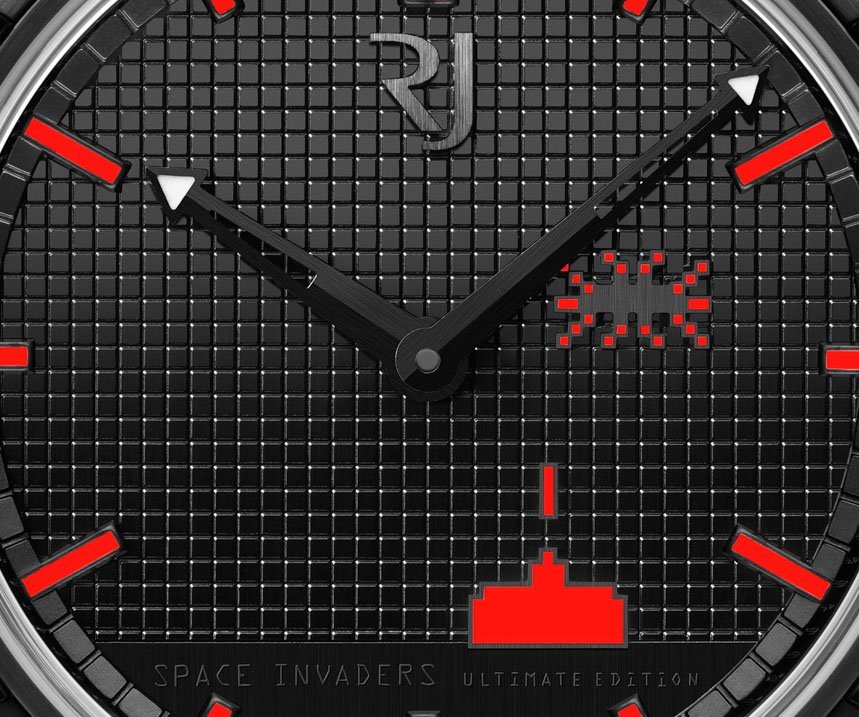 The dial is bead-blasted and satin-brushed “Black 3D,” acting as a suiting background for the 70s arcade game theme. As in all other Space Invaders watches, the dial also features a pixelated laser cannon and invader, both matching the color of the indices – the Romain Jerome Space Invaders Ultimate Edition will be available with white, yellow, red, blue, or green colored indices. The black hands do get lost in the black background, with their white luminous ends standing out with some contrast – I do wonder what the face of the watch would have looked like with color matched hands. 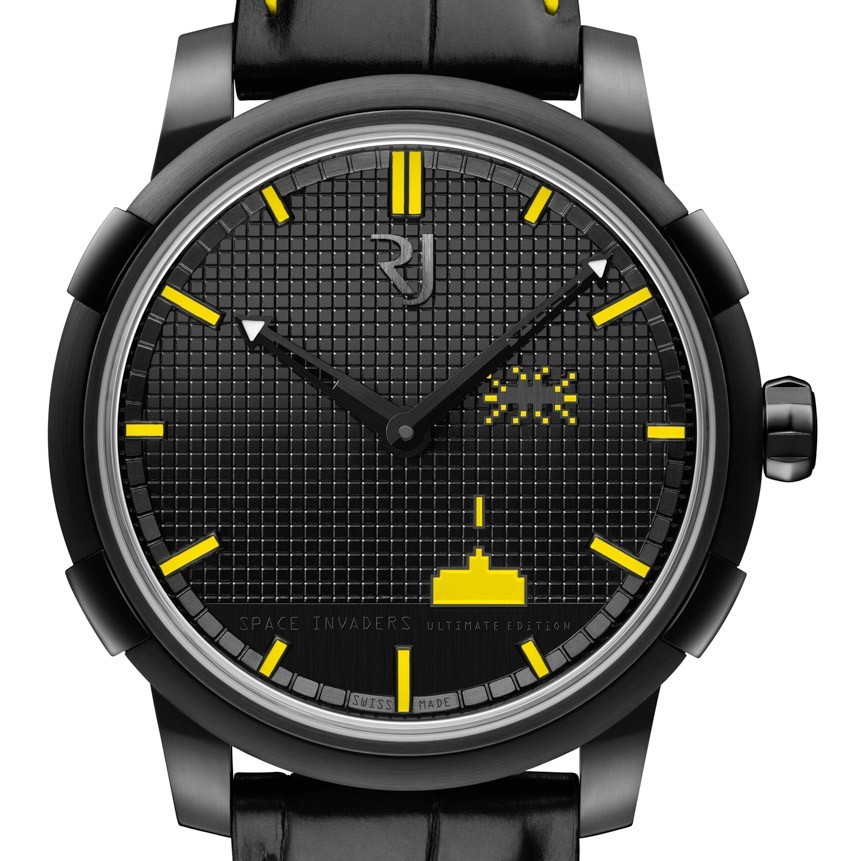 As was the case with all the other Romain Jerome Space Invaders pieces, the theme of this series will either work well for those in the niche market it is intended for (fans of the arcade game who also happen to be watch nerds and well-heeled enough to be able to afford such an unusual blend of luxury watches and arcade games), while it will certainly leave others cold and uninterested. The Space Invaders theme is one that hardly ever could have been picked up by any of the major luxury brands – but that does not mean it is not a viable idea; it just took a niche brand to find this niche market and try and make the most of it. With many different models in the Romain Jerome Space Invaders series being sold out already, one cannot argue that this venture for Romain Jerome has been an unsuccessful one. 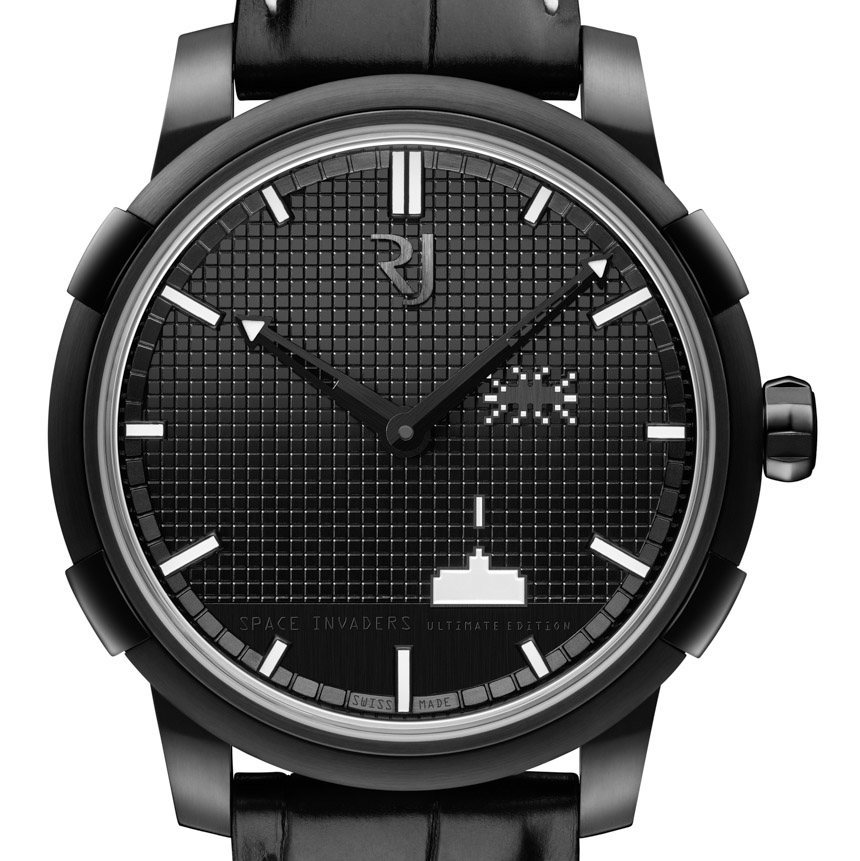 The black PVD coated stainless steel case is the 43 millimeter wide, round design, with the two square elements on both sides – a look that, at this point, has become one of the trademark aesthetics of Romain Jerome. It is, however, different (smaller and more simple-looking) when compared to any other model from this collection. The other pieces had a case that was originally styled to resemble a moon lander of sorts, with four landing pads in its four corners.

By contrast, the Romain Jerome Space Invaders Ultimate Edition has a case that is a bit more conservatively designed. As a side note, with it being a time-only watch lacking extra pushers or other structurally weak parts, the mere 30 meters of water resistance could, arguably, have been higher. The movement inside is the RJ003-A (which is a movement made by Swiss movement manufacturer La Joux-Perret), and in this series, its sole purpose is to display the hours and minutes – with running seconds or other indications on the dial being exiled in favor of a full view at this imitated world of 70s arcade gaming.

As mentioned above, the Romain Jerome Space Invaders Ultimate Edition will be sold exclusively through the brand’s website and will be limited to just five pieces in each color. Price for each is 6,900 Swiss francs or around $7,150. romainjerome.ch