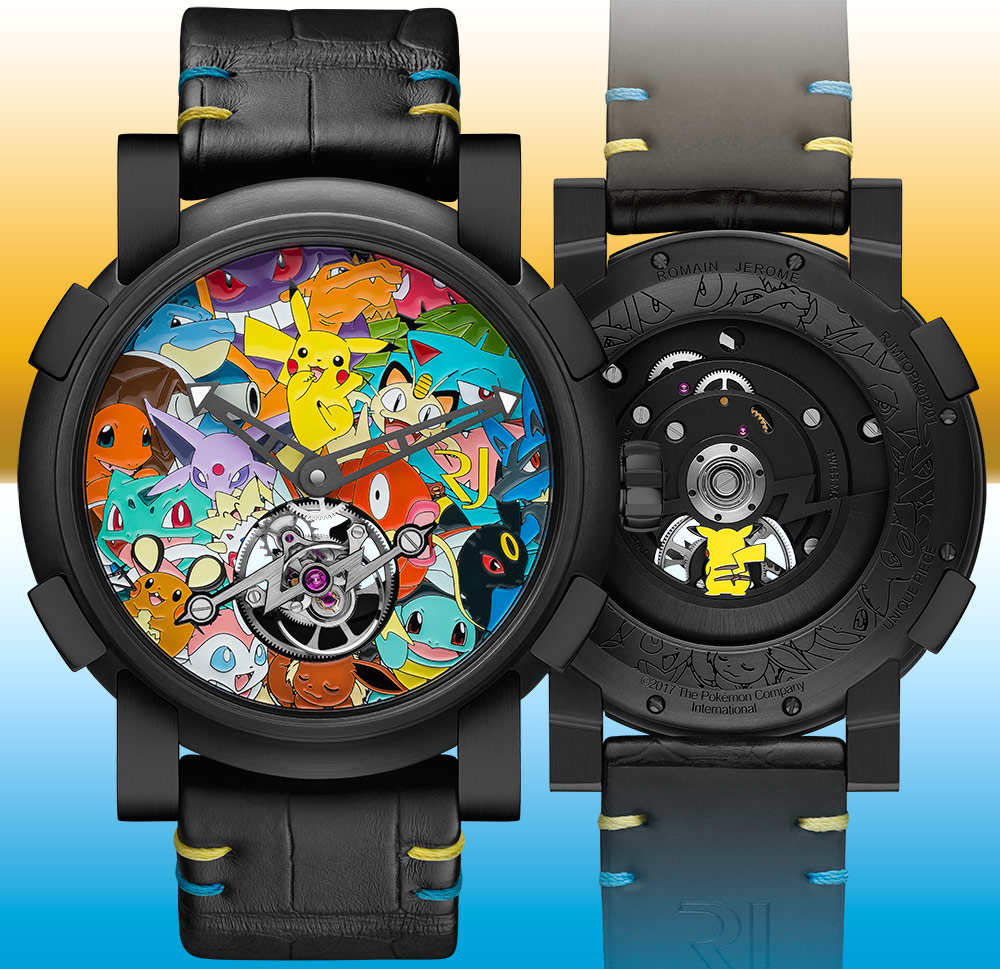 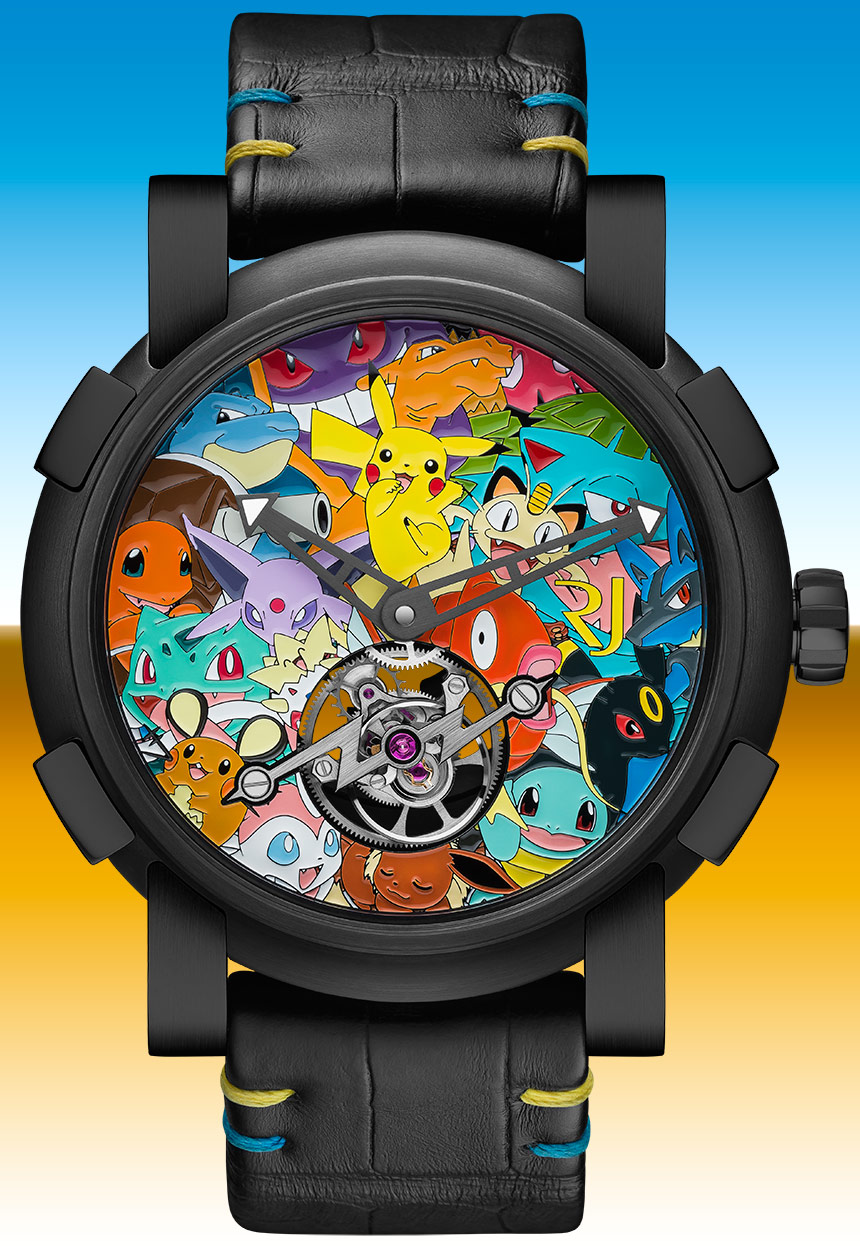 Romain Jerome is once again riding the coattails of pop culture and nostalgia with the new Tourbillon Pokémon watch. It might be hard to imagine the target audience for a high-end Pokémon watch with a tourbillon and a six-figure price tag, but as only one Romain Jerome Tourbillon Pokémon is being produced, they’ll only need to find one very specific kind of super-fan. That person probably exists, but this watch really serves to give the brand some controversial buzz, and it has surely succeeded at that. 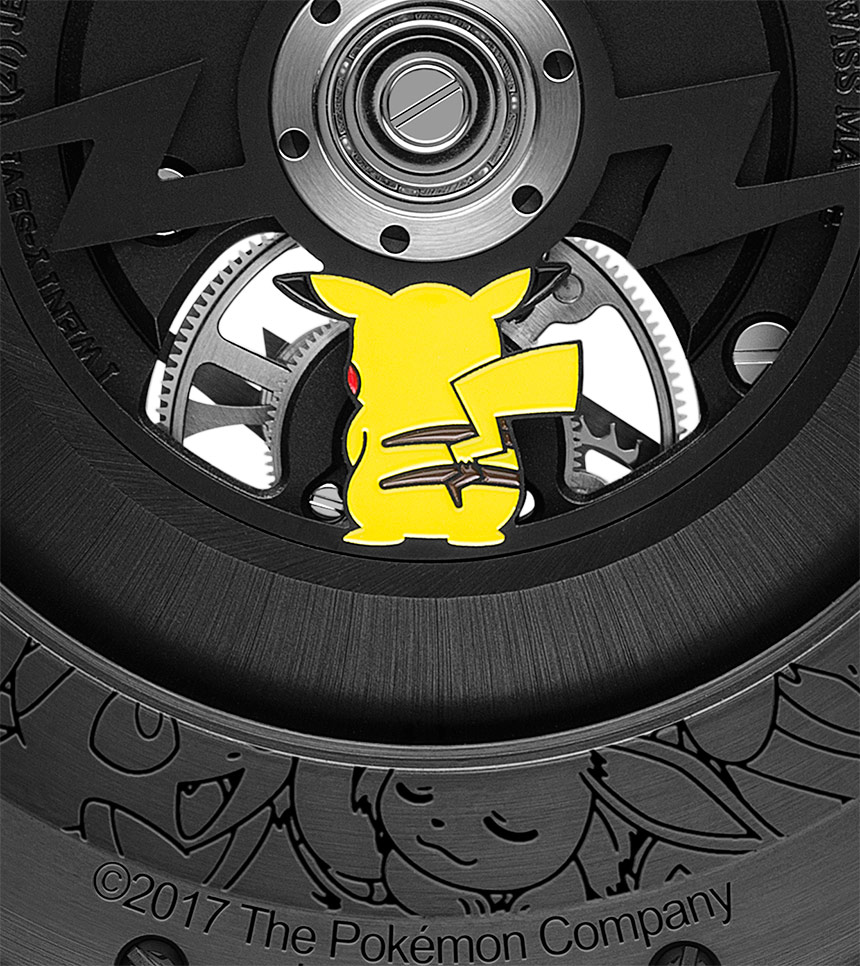 Before I get into the watch, I want to make sure our readers know what Pokémon actually is first. Short for “Pocket Monsters,” it began as a Japanese role-playing game for the Nintendo Game Boy in 1996, the overall premise of which is that Pokémon Trainers capture and train these strange Pokémon creatures to fight for sport. It became really (and I mean really) popular when it came to the United States in 1998. There were originally only 150 (+1 if you include Mew) Pokémon characters but that turned into over 800 as it evolved over the years into a vast franchise. The “augmented reality” Pokémon Go game for smartphones released in 2016 has been in the news as the app has players walking around notable public (and not-so-public) areas of the world capturing Pokémon. It’s revitalized the franchise and caused a lot of car accidents. 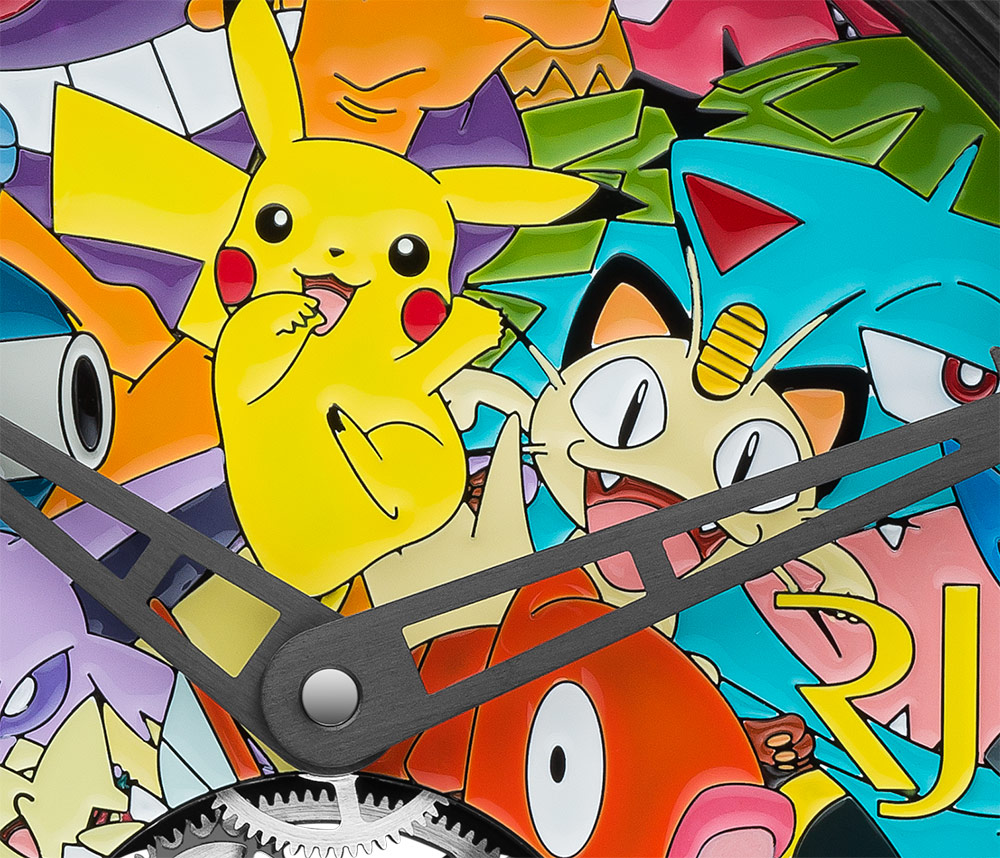 Often focusing on artistic dials, Romain Jerome has provocatively tackled a wide range of subjects. Following other video game-themed watches, from Space Invaders and Pac Man to another Nintendo-licensed watch with the Romain Jerome Super Mario Bros. watch (recently reviewed here), and many more, the Romain Jerome Tourbillon Pokémon watch is at least brand-consistent. In fact, 2016 saw a limited edition of 20 Romain Jerome RJ X Pokémon watches featuring a first-generation Pikachu in bright yellow, without a tourbillon, and costing only $20,000. 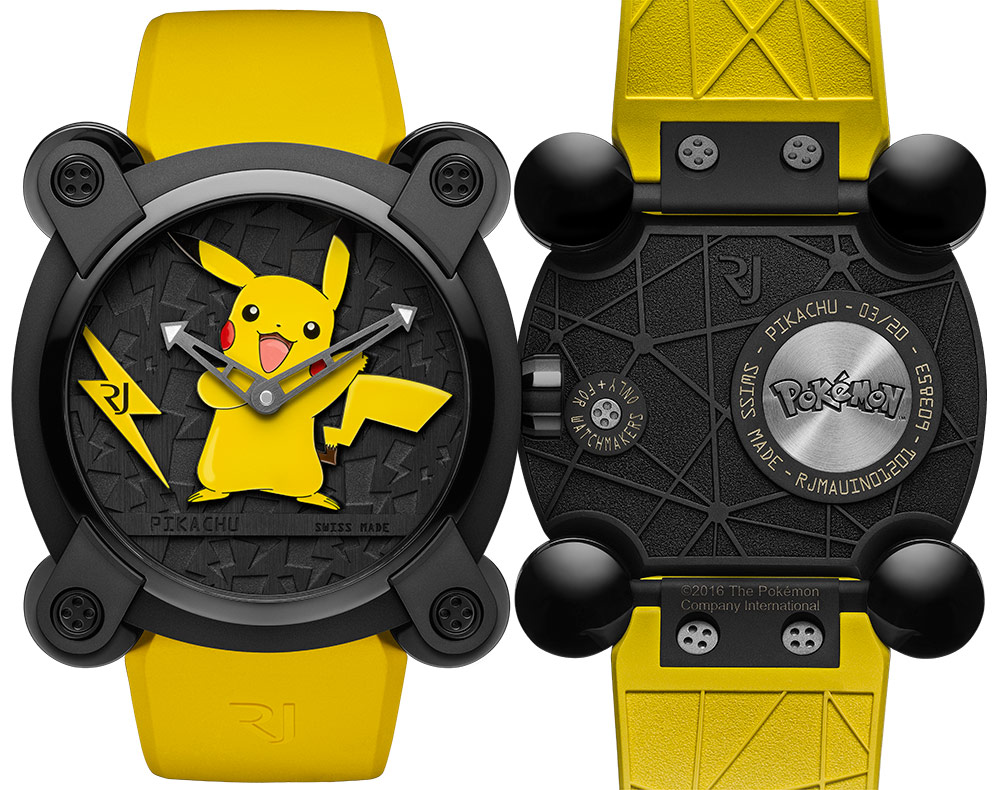 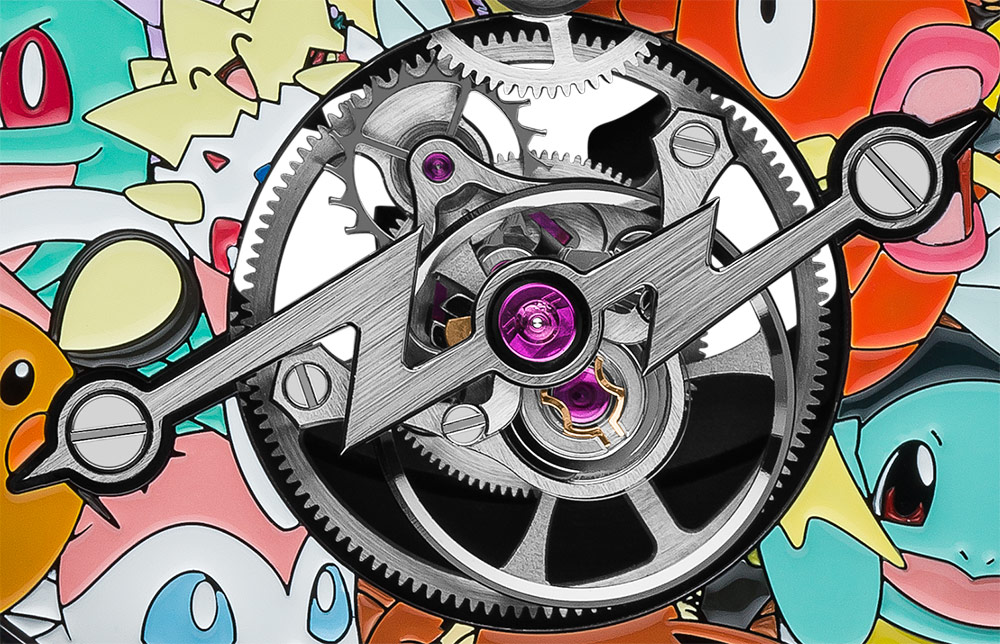 Inside the watch sits the RJ400-TS movement with tourbillon. This mechanical self-winding movement beats at 28,800vph and features a generous 60-hour power reserve. The tourbillon is on display at 6 o’clock on the dial and is secured with a cool lightning bolt bridge. While a sapphire crystal case back offers a view of the movement, not much of it is actually visible. One of the most fun parts of the watch, to me, is the PVD-coated rotor decorated with an enameled back-view of Pikachu. Double scoop of ridiculous? Yes. But cool in some way nonetheless. Adding to the rest of the Pokémon swag, the case back has a mirror of the dial design etched into the PVD. 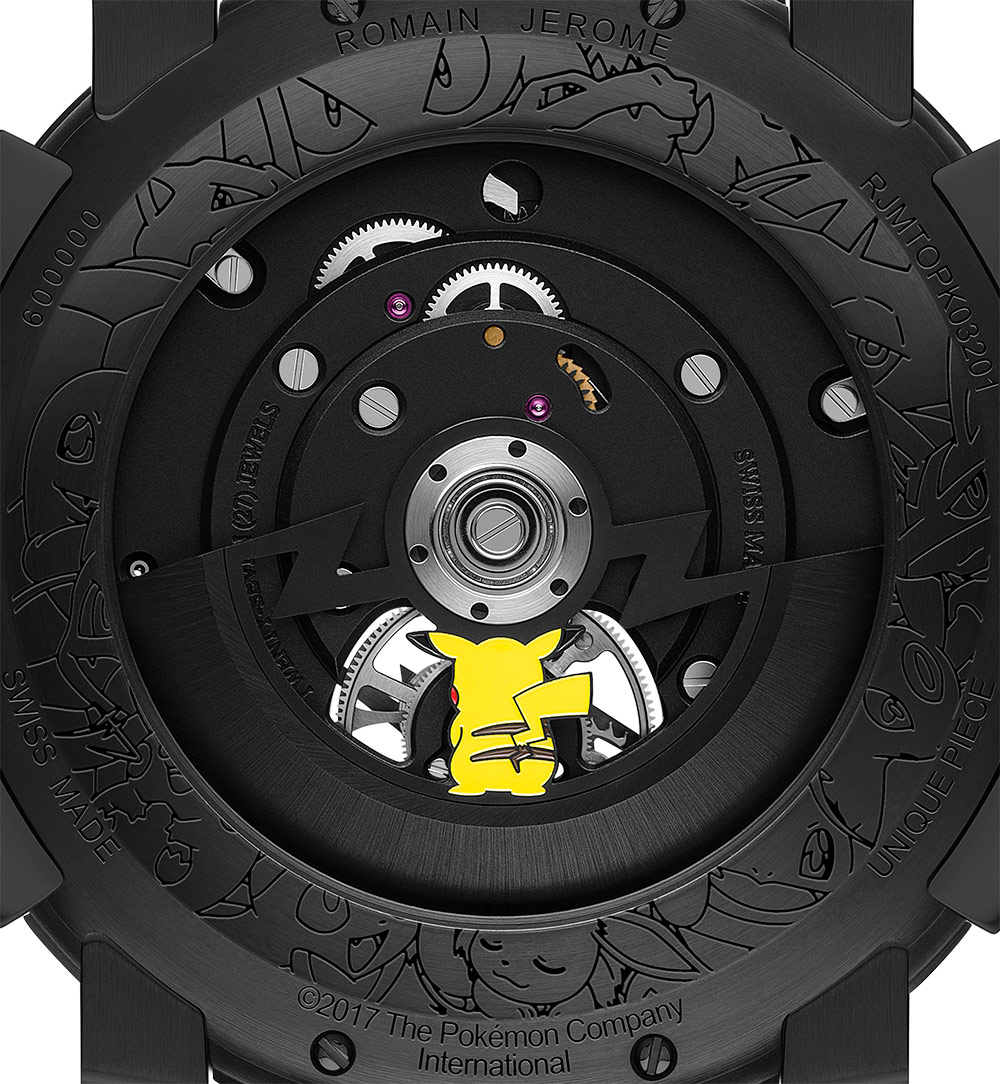 …Which brings us to the most unique part of the watch: the dial. Credit where credit is due, this is some of the most beautiful enamel work I’ve ever seen. Regardless of whether or not Pokémon does it for you, it’s not easy to dismiss the quality of the hand-filled cloisonné enamel work, as well as the attention to detail and color required to bring out the various characters from the different Pokémon generations so vividly. Personally, I think the skeletonized PVD-coated hands missed the mark for legibility – though I acknowledge that getting hung up on strict utility is probably totally beside the point in this case. 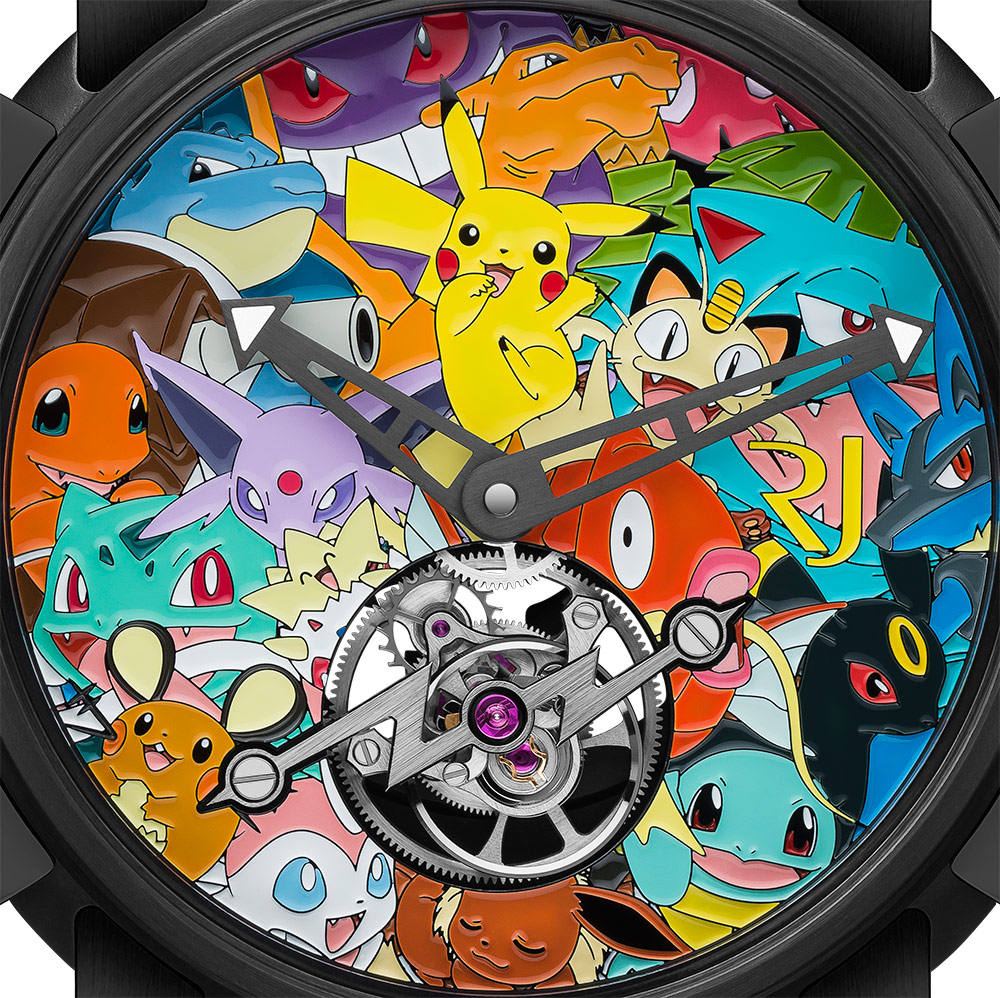 Let’s be totally honest here that a $200,000 Pokémon watch (cloisonné and tourbillon or not) is going to be utterly absurd to most people and maybe even insulting. Taste is subjective, and people buy watches for very personal reasons. Ariel’s article on the Super Mario Bros. watch (linked above) gave, in my opinion, a very well-thought-out account of how and why emotion comes into play when purchasing a “playful” or nostalgic watch.

I do wonder, though, if Pokémon isn’t a bit young (first created 21 years ago) to generate the same kind of nostalgia as Mario and other now-classic games. Which again raises the question of who the watch might be for. Very few people who were old enough to have played it as children are likely to have the earning power today to afford something like the Romain Jerome Tourbillon Pokémon. Young super-celebrities with unusually large wrists, perhaps? Consider me stumped. Once again, the Romain Jerome Tourbillon Pokémon is a one-off piece with a price of $200,000. romainjerome.ch