It seemed like almost overnight, Nodus watches were everywhere. It went from being a brand that operated on the fringes of social media to one that you see every time you open Instagram. I have a tendency to be skeptical when things like that happen. Nodus, however, deserves attention. Debuting back in 2017 with its Trieste diver, the brand has put forth a concerted effort to make uniqu, high-quality, affordable timepieces that stand on their own merits. Nodus makes an effort to explore different aspects of watch design with its releases. The Duality, Nodus’ most recent release, examines depth and dimension on its dial by combining sandwich dials with applied elements. 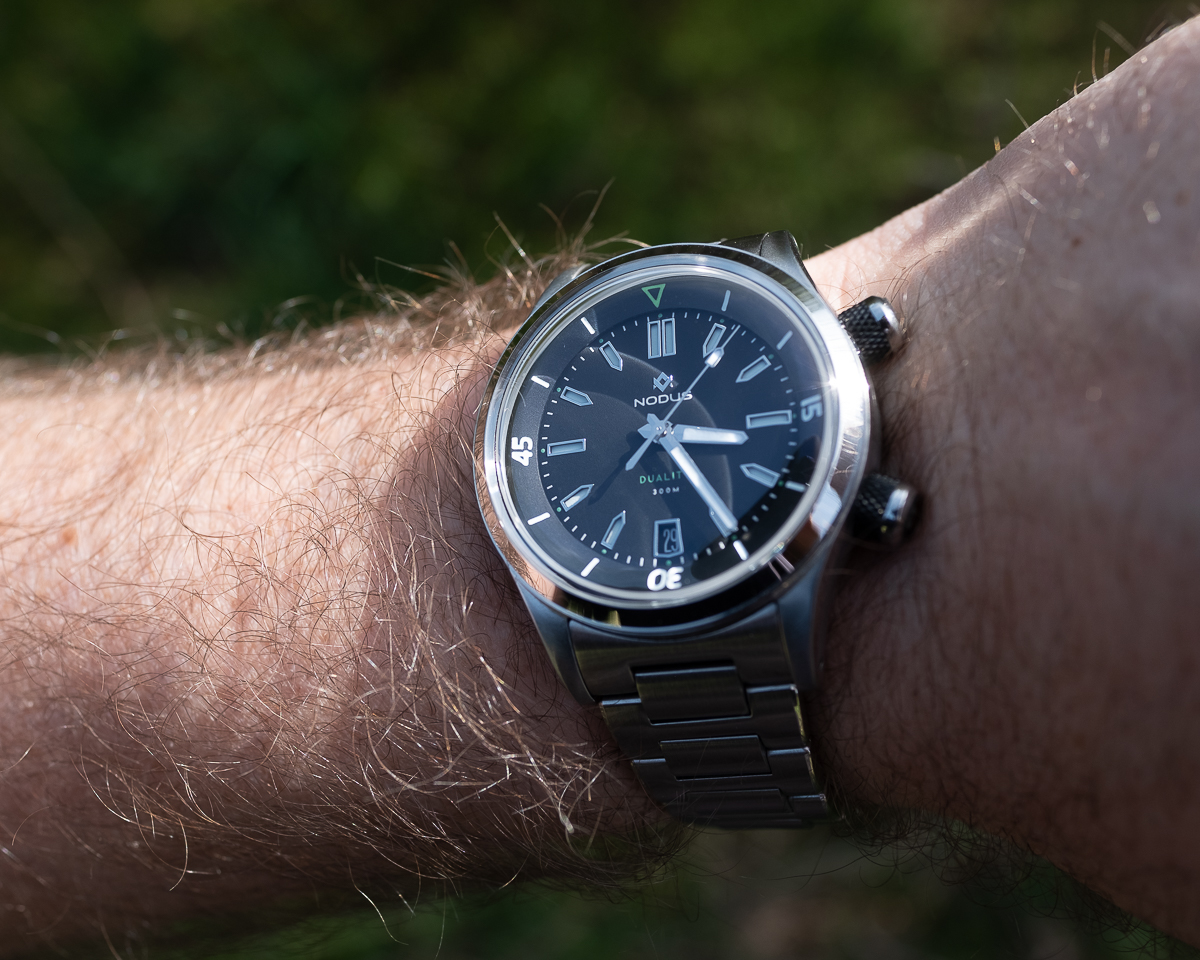 The Duality comes in a 40mm 316L stainless steel case. This is pretty straightforward for a watch of this caliber, although when you get it on the wrist, you notice that the Duality has a luster unfamiliar at this price point. I think this is due primarily to the polished bezel, polished handset, and applied indices. When you’re wearing this watch, it dances through the light like a small mirror.

The case itself has a reasonably simple “soft” brushed finish across the tops of the lugs and along the sides. There’s a wide polished bevel separating the two, which also lends itself to the above “lustrous” statement.

Among these many positive aspects, there are some sharp edges, primarily where the lugs terminate. When it’s on the wrist, the issue isn’t super-noticeable, and at this price point, I suppose it’s something to be expected.

Flipping the watch over, you are greeted by a simple screw-down caseback with a fascinating half-circle polished relief. I really like this, and the design is also on the second crown. The polished half-circle design is a play on the “duality” motif; it’s worth tacking on here that the Duality is rated to a full 300m. 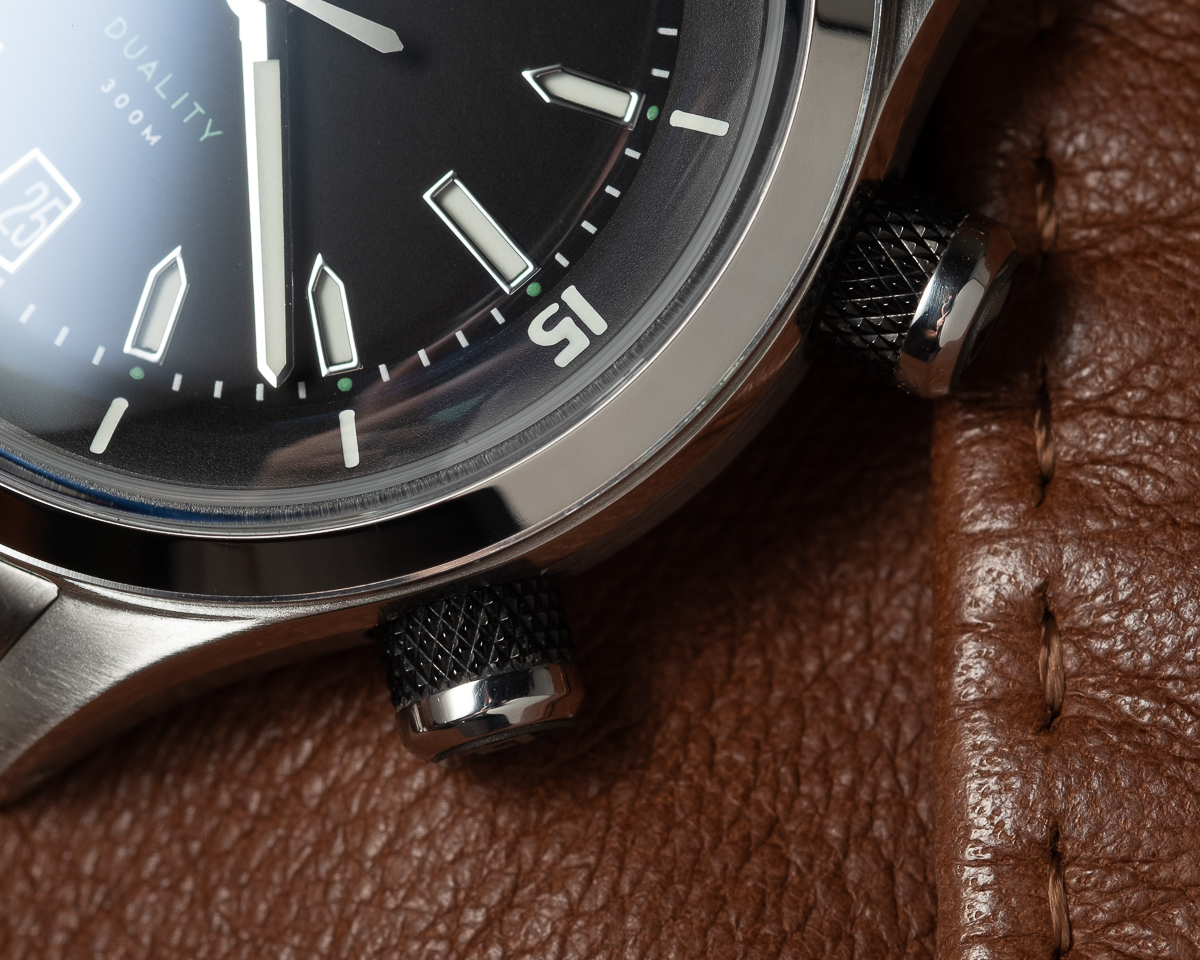 Speaking about the crowns, there are two. This is a “compressor-style,” watch. The top crown at roughly 2 o’clock adjusts the internal bezel. The crown at 3:30 winds the watch and sets the time. One thing I have noticed is that you need to be very intentional when screwing down the bezel adjustment crown. Otherwise, it doesn’t fully disengage the mechanism, and it’ll move it a hair while you’re screwing it down. Not a big deal, but worth pointing out. 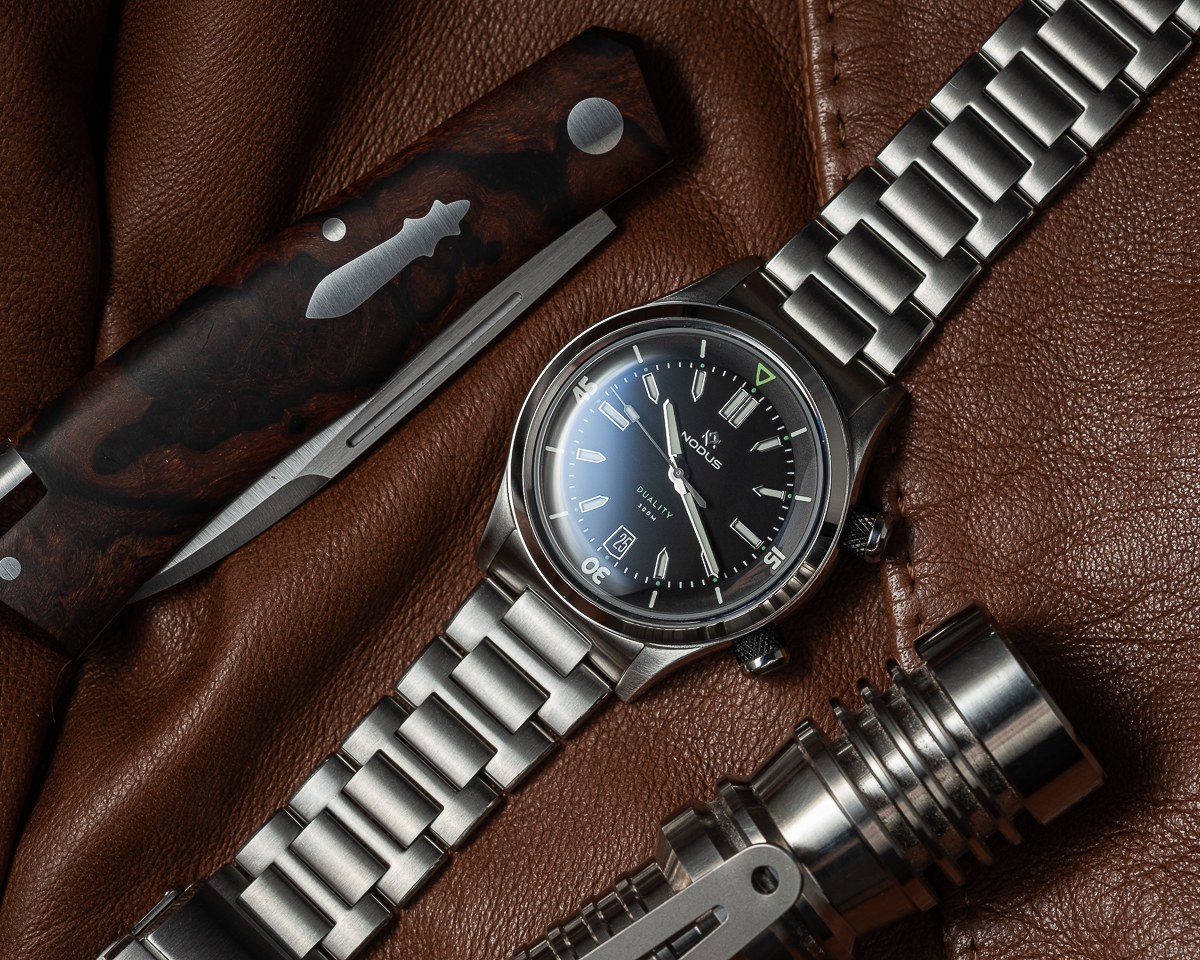 Nodus chose the Miyota 9015 for the Duality. This seems perfectly fine to me — 24 jewels and a 28,800 BPH movement. This is generally thought to be a cheaper alternative to a Swiss movement. While this might be the case, I’ve owned several watches with Miyota 90XX movements, and they always perform excellently.

Keeping cost in mind, these Dualities are just $700. I believe that’s a really attractive entry-level price point — the incorporation of a Swiss Sellita or ETA movement would likely bump the price of this piece into a different category. 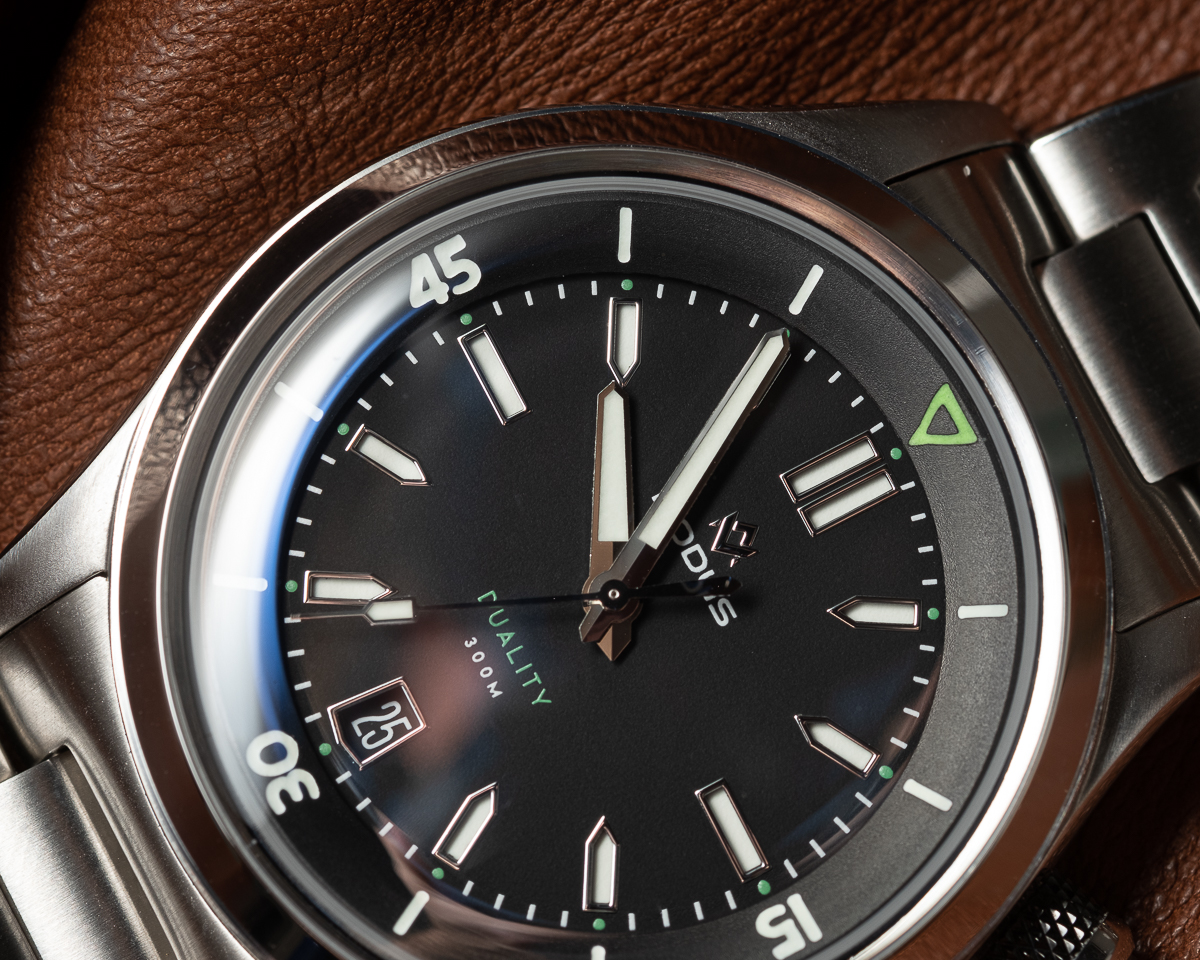 The dial is where the Duality really hits its stride. The watch has two crowns, is offered in two colors, and has a double-layered dial. I would personally argue that there are three layers to the Duality’s dial, however. The hour markers are applied, but the centers that would usually be filled with lume are cut out in the style of a sandwich dial. The lume is beneath. As you can imagine, this delivers an enormous amount of visual interest. The sacrifice, however, seems to be the lume intensity. I would guess that it has to do with the exposure the luminescent paint gets to the light. 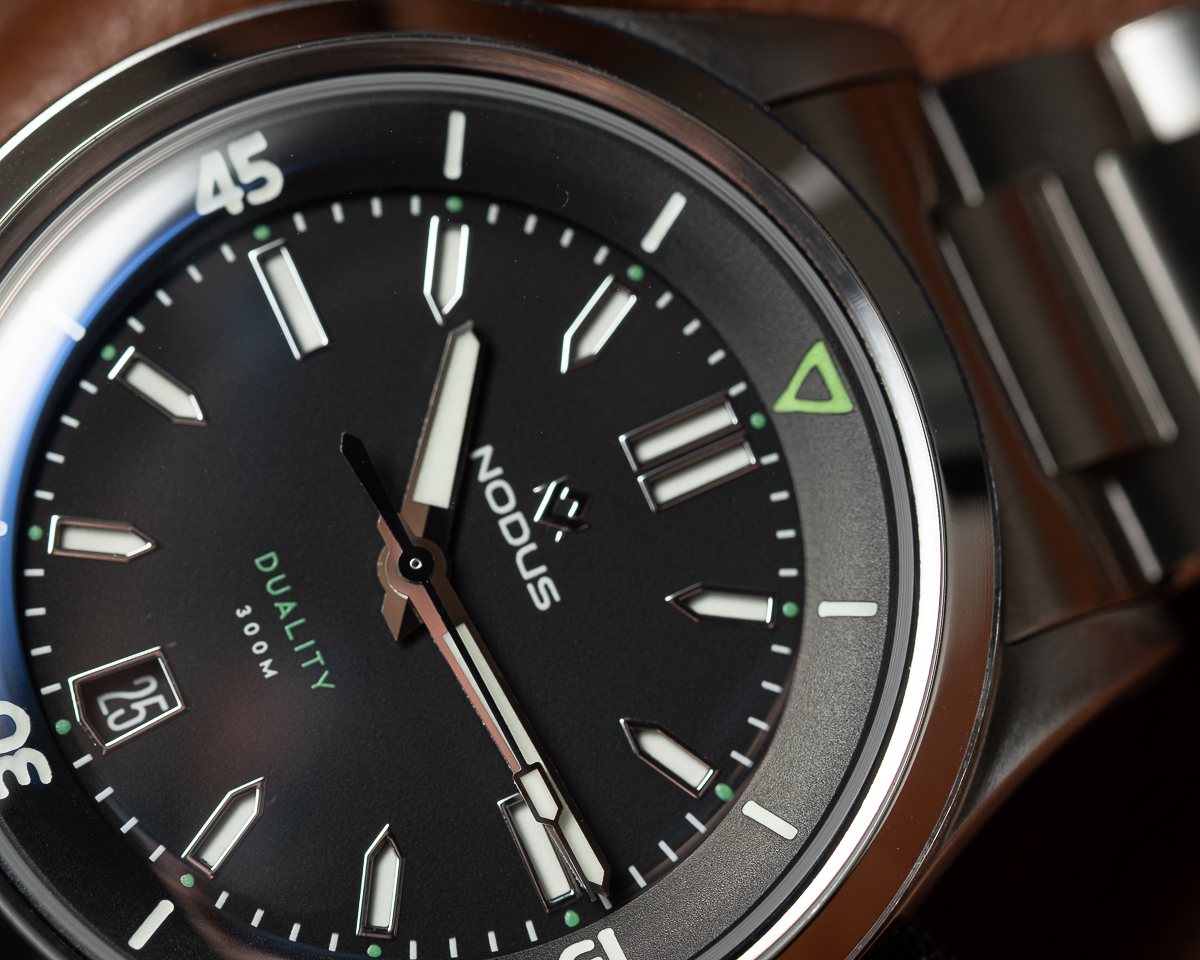 The sapphire crystal is quite interesting, as well. There’s a sharp bevel along the rims of the crystal that lead into a flat plane. The best way to think about it would be somewhere in between a boxed sapphire crystal and a domed crystal. This crystal adds to the sparkliness of the watch itself. The bevel catches the light really nicely, but the flat center portion cuts down on any potential distortion. This is clear in the pictures.

The chapter ring on the Duality has been replaced by the inner rotating dive bezel. This watch is also available with a 12-hr travelers bezel, which would be my preferred configuration. The green painted triangle at 0 is lumed and should be visible when needed. The remainder of the painted numbers are not. This bezel appeals to me because it’s easily adjusted in either direction; this would be especially useful in the 12-hour configuration as you move through timezones. 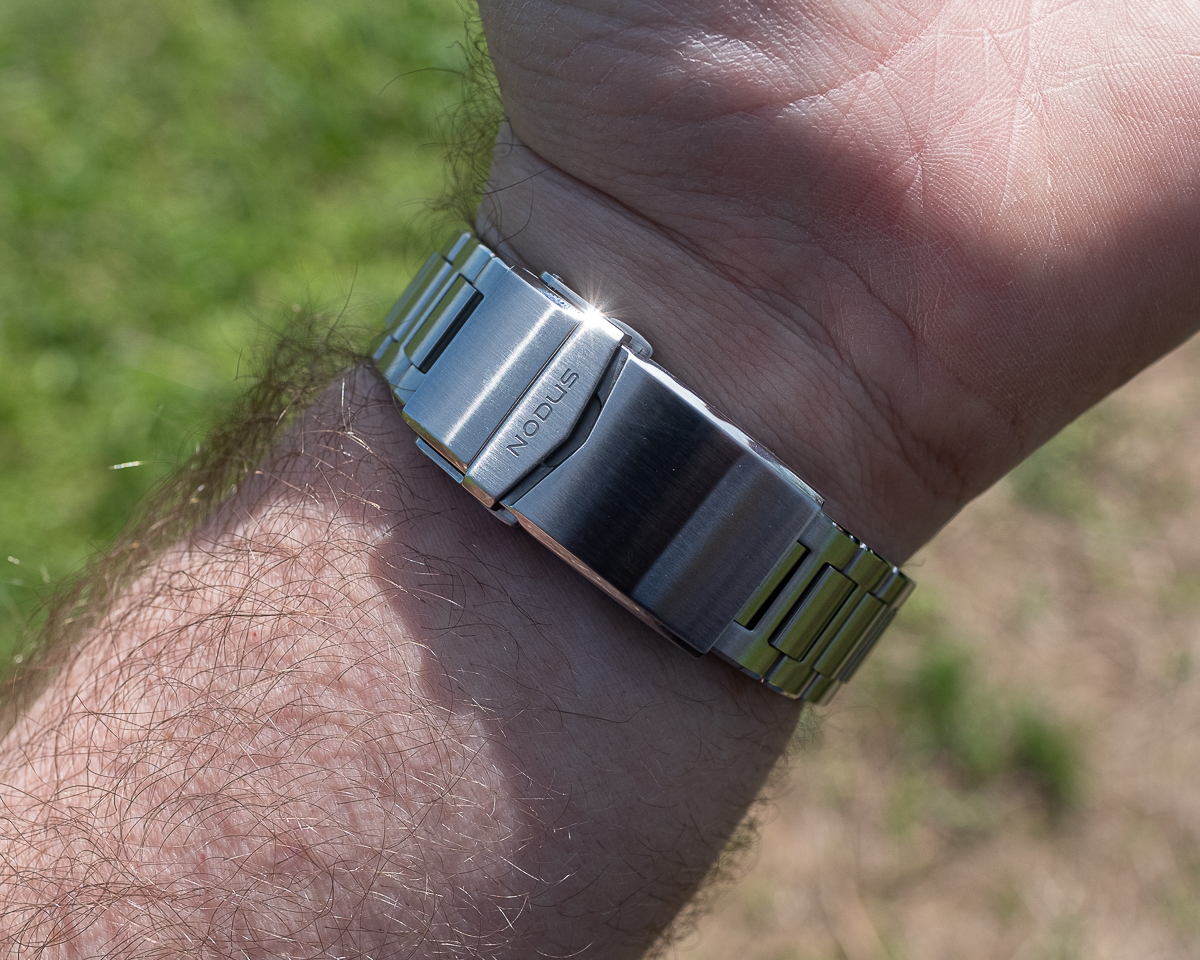 The Duality ships on a nicely executed 20mm (tapering to 18mm) steel bracelet. The links are of a screw-together construction. By all accounts, this is a great strap option. The clasp doesn’t leave a lot to the imagination, with a signed foldover push-button style. It reminds me of a lot of the clasps you see on well-made aftermarket bracelets for Seikos (not a bad thing).

It’s worth pointing out I think, in particular, that the black-dialed version would look great on a tropic-style rubber strap. 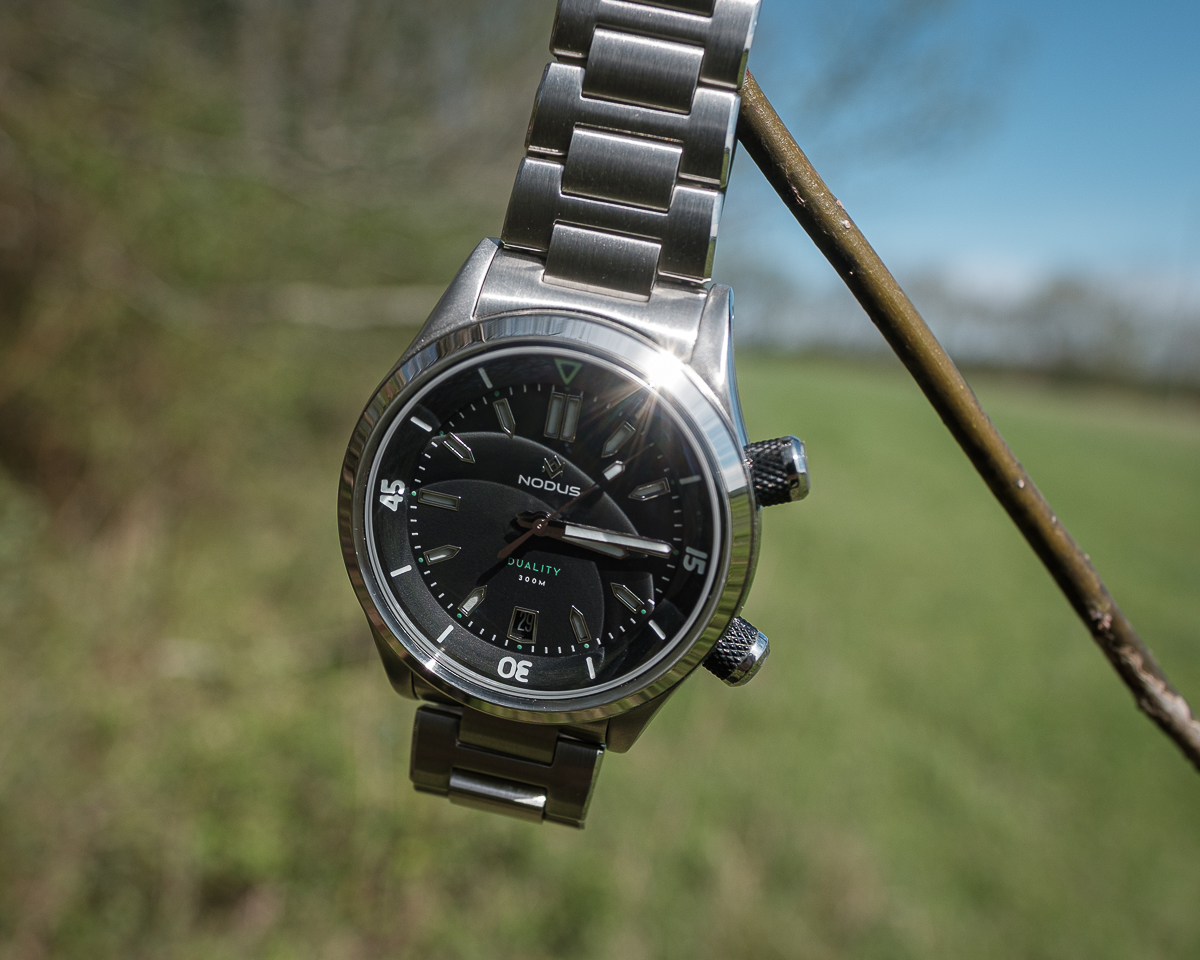 For my wrist, I think the Duality hits the sweet spot in several categories. The primary two would be chiefly size and, almost as importantly, cost. The Duality is sized well and priced right at $700, putting it in direct competition with some of the heavy-hitters in the independent watch brand world.

The first and most obvious comparison would be the Halios Seaforth (if you can find one available). The Seaforth lacks the internal rotating bezel but is well-known for its exceptional finishing and design. It is roughly the same price; however, the Halios does employ a Swiss ETA movement, and that’s a value decision the purchaser will need to make.

Next, of course, would be a Seiko comparison. Perhaps not a direct apple-to-apple comparison, but the new Seiko Arnie reissue would give you an unusual and yet highly functional piece like the Duality does. The Arnie is a solar quartz watch that packs a ton of functionality into a tiny package and is priced a little under the Nodus at $525. Again, this will come down to a consumer decision likely based on how vital a purely mechanical piece is to the buyer.

Must you have a Compressor-style watch, but you’re finding the $700 for the Nodus a hard pill? Well, there’s always the Dan Henry 1970 Automatic Diver. This is a 40mm steel diver with an inner rotating bezel similar to the Nodus. It’s priced at a very reasonable $290 but, in my opinion, it lacks the depth and personality of the Duality. 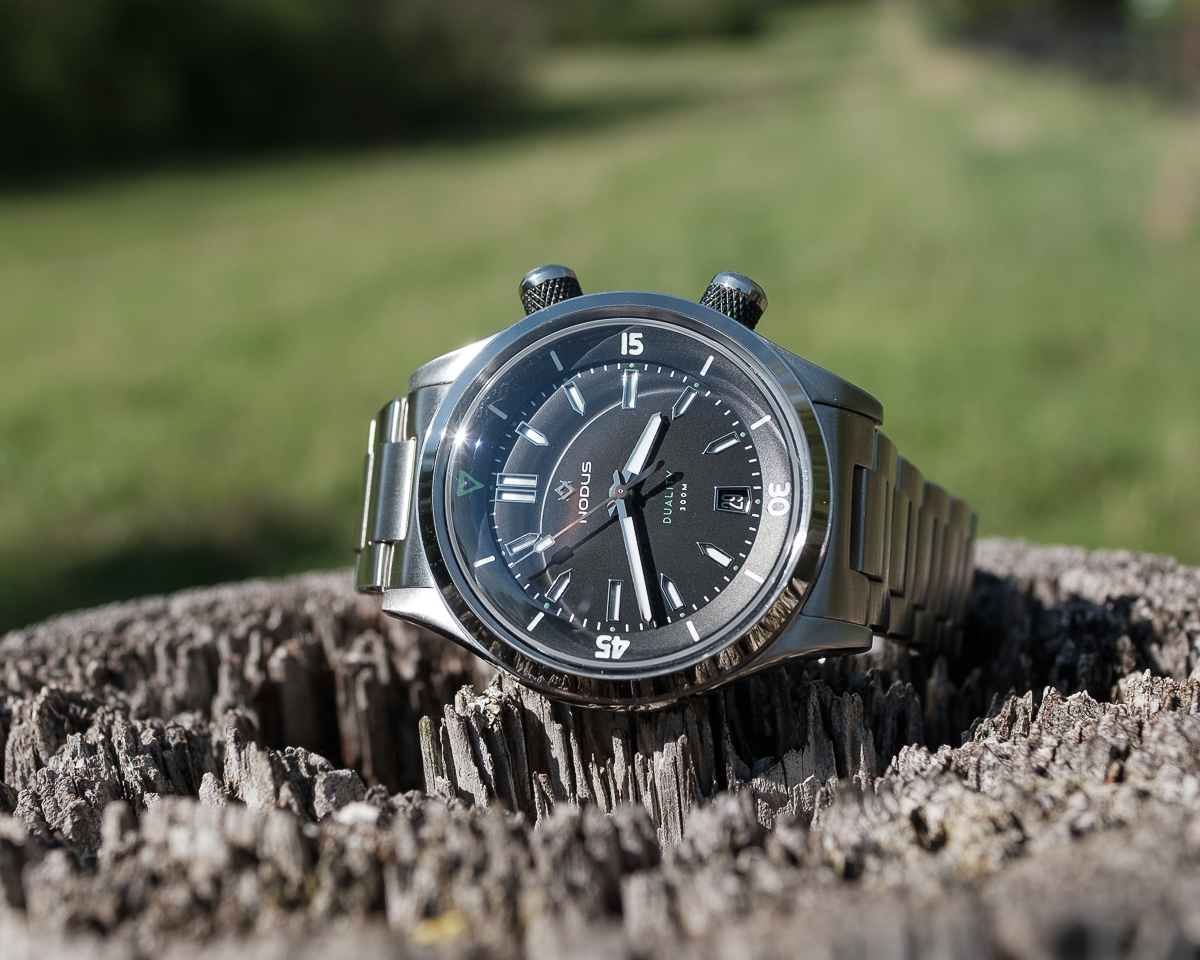 It feels almost clichéd at this point to highlight how crowded the independent watch brand landscape is. It’s true, though, and it takes something special to stand out. Sometimes, the special something is a design that speaks to you, or sometimes its a functionality/value equation that works for your needs. In my opinion, I Nodus straddles the two with the Duality. You get a well-rounded and highly functional timepiece for precisely the right price. Plus, it’s something that you can be proud to put on your wrist. I know I have been. The Nodus Duality is available directly from the brand for $700 and can be ordered in either Chasm Black or Unity White. For additional information, visit  noduswatches.com.

Necessary Data
>Brand: Nodus
>Model: Duality
>Price: $700
>Size: 40mm
>Would reviewer personally wear it: Yes!
>Friend we’d recommend it to first: Someone who is looking for a modern compressor-style watch.
>Best characteristic of watch: The multi-layered dial.
>Worst characteristic of watch: Some of the sharper edges; this is very minor, however.