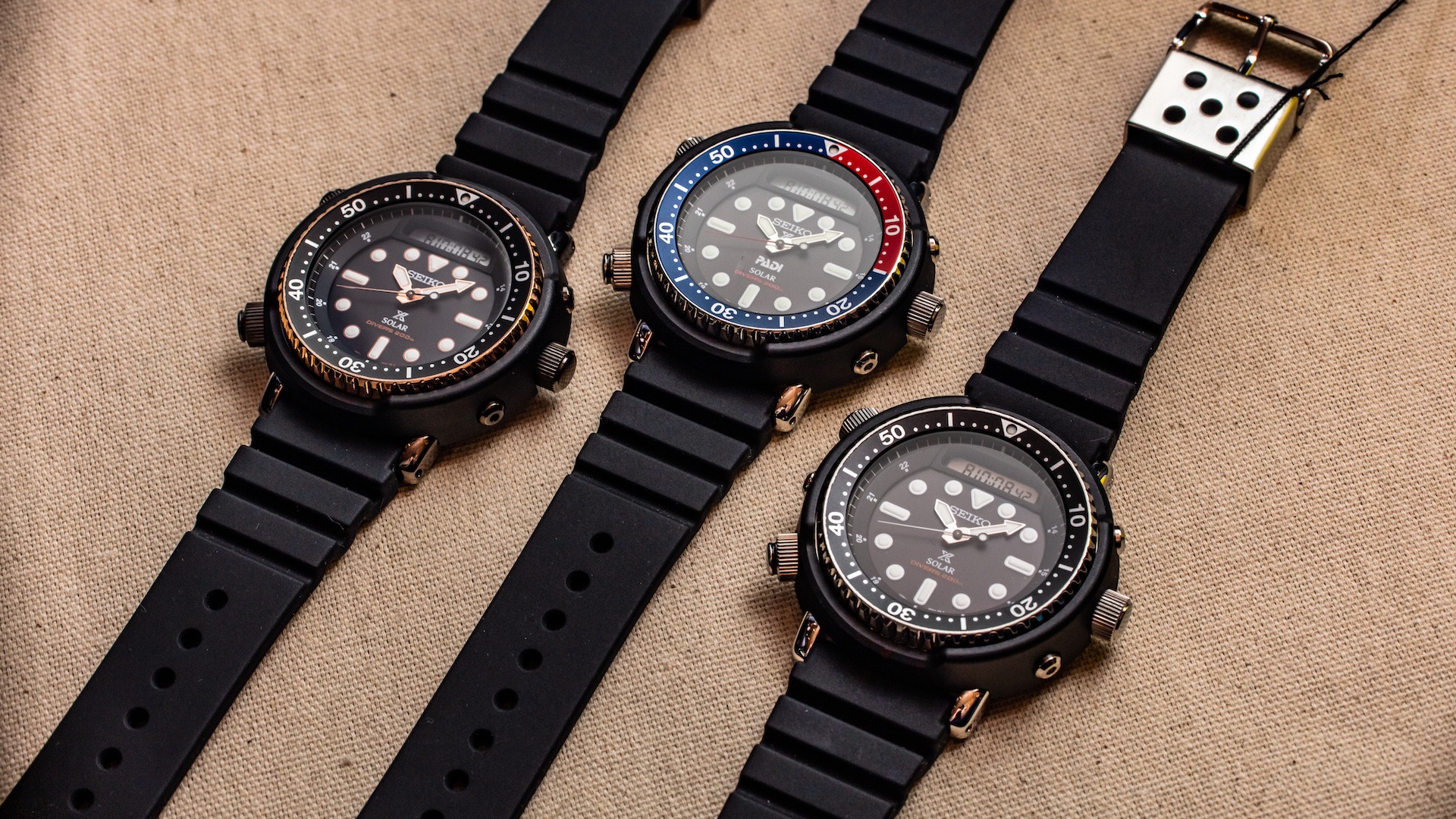 The new Seiko Arnie is a star, thanks to its forerunner’s memorable association with one of the world’s biggest (literally) and most enduring names: Arnold Schwarzenegger. It’s not unusual for watches to end up with an unofficial celebrity association that effectively comes to define the model. These genuine relationships between star and timepiece are often the most long-lived. It means so much more when a celebrity actually chooses to wear a product rather than insincerely strapping on whatever they’re being bribed to wear. It stands to reason that a watch chosen personally is far more likely to be a true reflection of them and their values, which is something that resonates with fans who wear watches for the same reasons. And so, when Arnold Schwarzenegger, one of the most bankable stars of the 1980s, donned models from Seiko’s first Ana-Digi hybrid quartz family (the Seiko H558-500x range) or modifications thereof, for films such as Commando, Raw Deal, Running Man, and Predator, the association was immortalized. 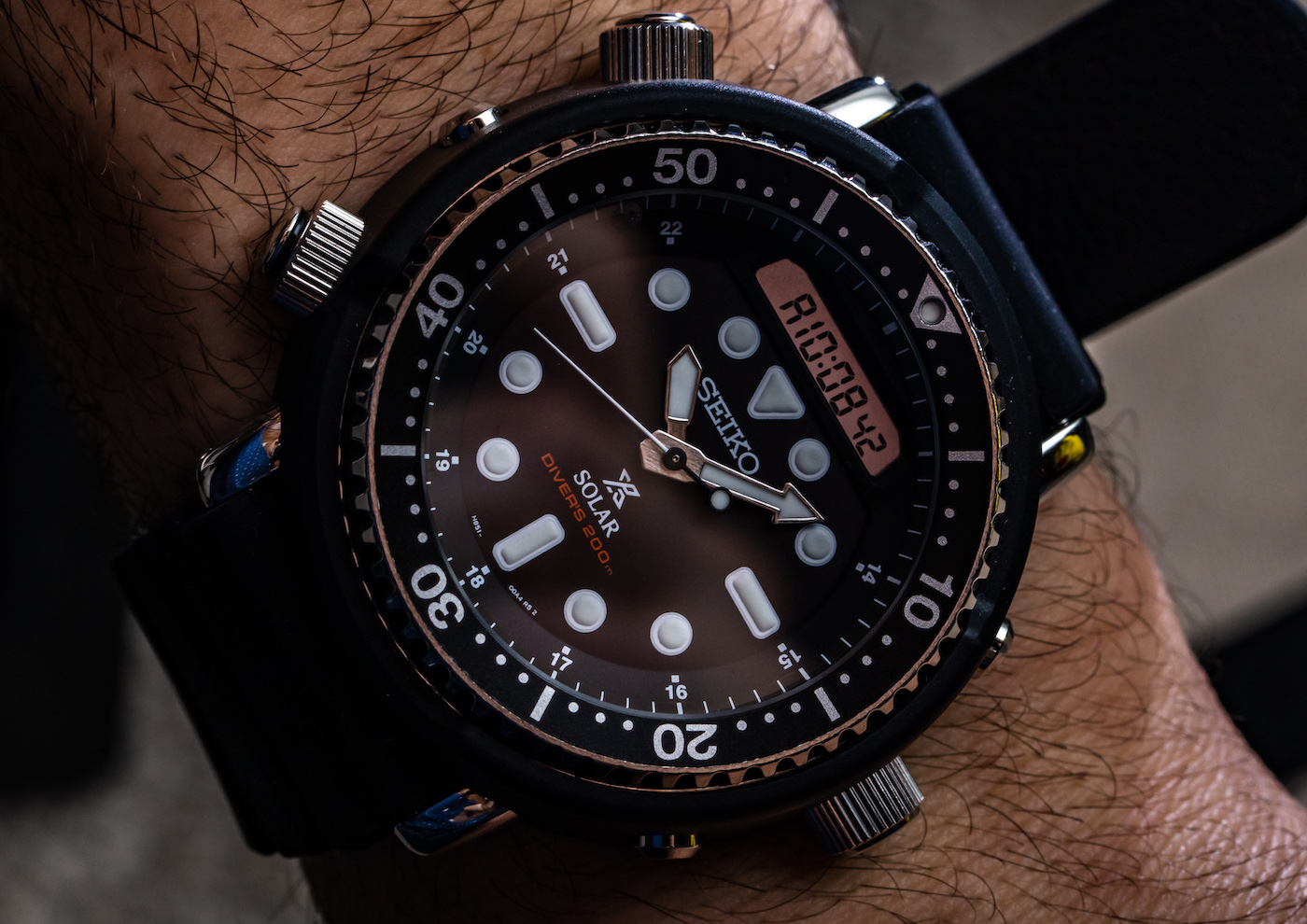 Now, almost 30 years since the H558-5000 series and its offshoots were discontinued, a new model reference has been released to fill the gaping void left by Arnie’s favorite ticker (aside from the one he had surgically repaired in 1997 and again in 2018). The biggest functional update to mention, off the bat, is the fact that this re-edition (which has not been released to coincide with any notable anniversary of the piece, which is decidedly off-brand) is actually solar-powered. Had the technology been affordable at the time, it’s an update I’m sure would have appealed to Arnie, given the environments in which his characters frequently sported the watch. (It’s hard to get a battery flipped in the jungle, after all.) 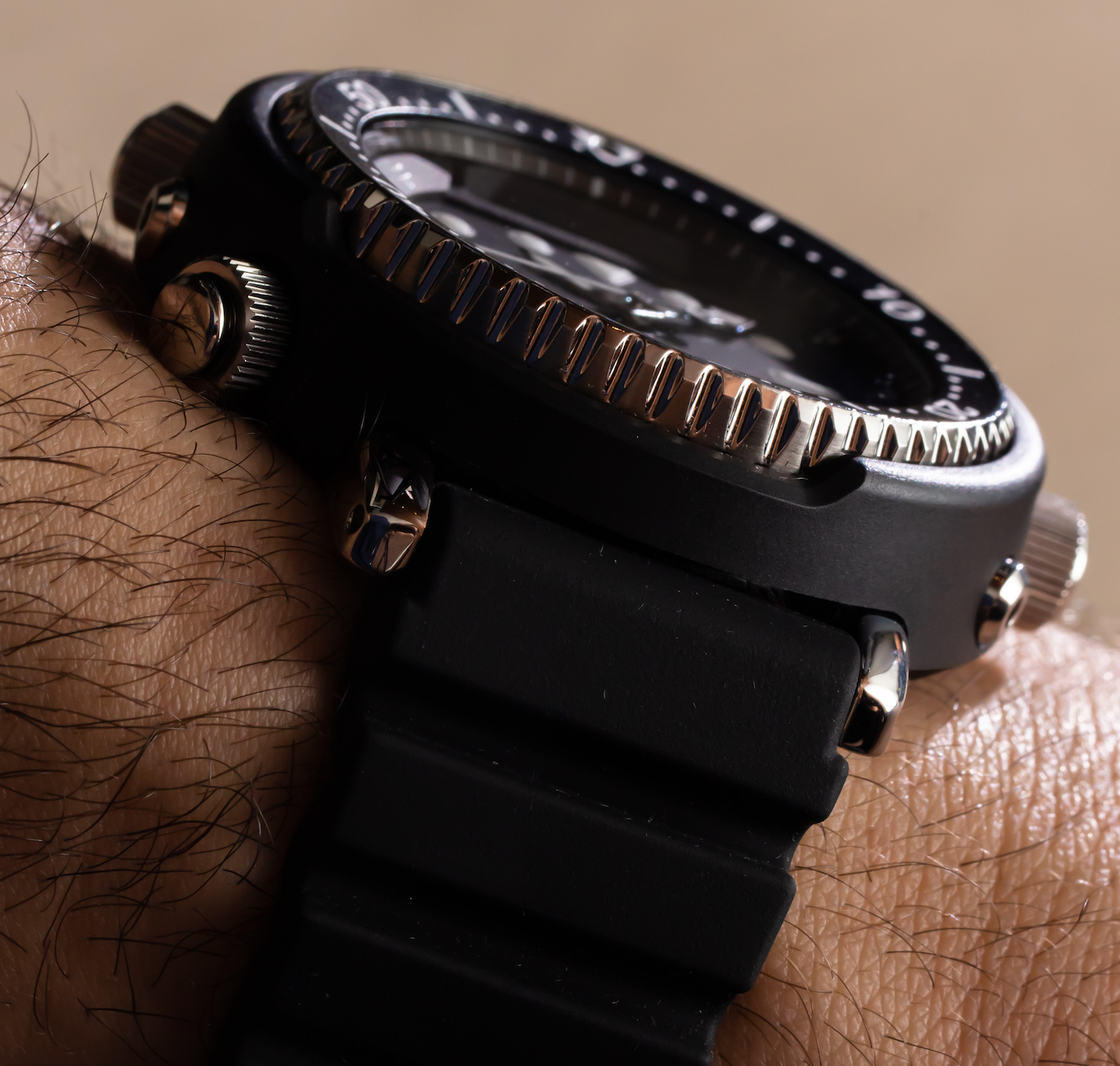 The original H558-5000 on which this Seiko SNJ025 Solar watch is based was released in 1982. As you can probably tell from the case, it is part of the Tuna family. But despite it clearly presenting a huge amount of Tuna DNA, it is known for being much thinner than the top-heavy models that would follow. It is pleasing to see that, while this new edition has crept up in diameter a little bit to 47.9mm (from the original 45mm), the thickness, although increased from the original’s 11.3mm, is still relatively conservative and wears very comfortably indeed. 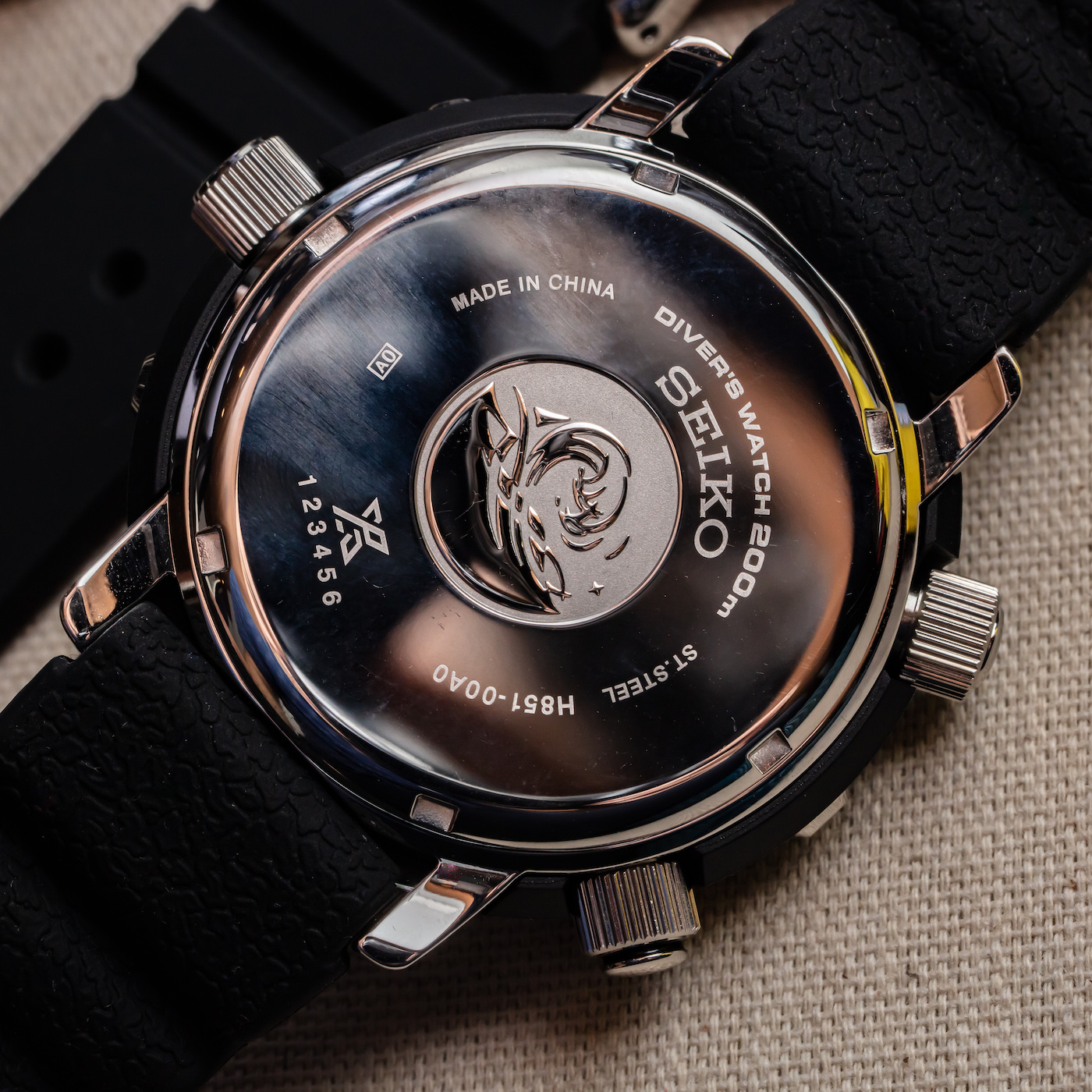 This new release is composed of three models. We were lucky enough to sit down with them in Baselworld and have a good look at the much-improved build quality and the pleasing choice of colorways on offer. The solar movement driving the new releases is the Seiko H851. This movement features analog and digital time displays (enabling a dual-time readout), a chronograph function, an alarm, and a calendar. Using and setting the functions is likely to be simple enough — if it’s based on the old model’s function map, then it definitely will be — but the pieces we had a chance to photograph weren’t fully functional samples. 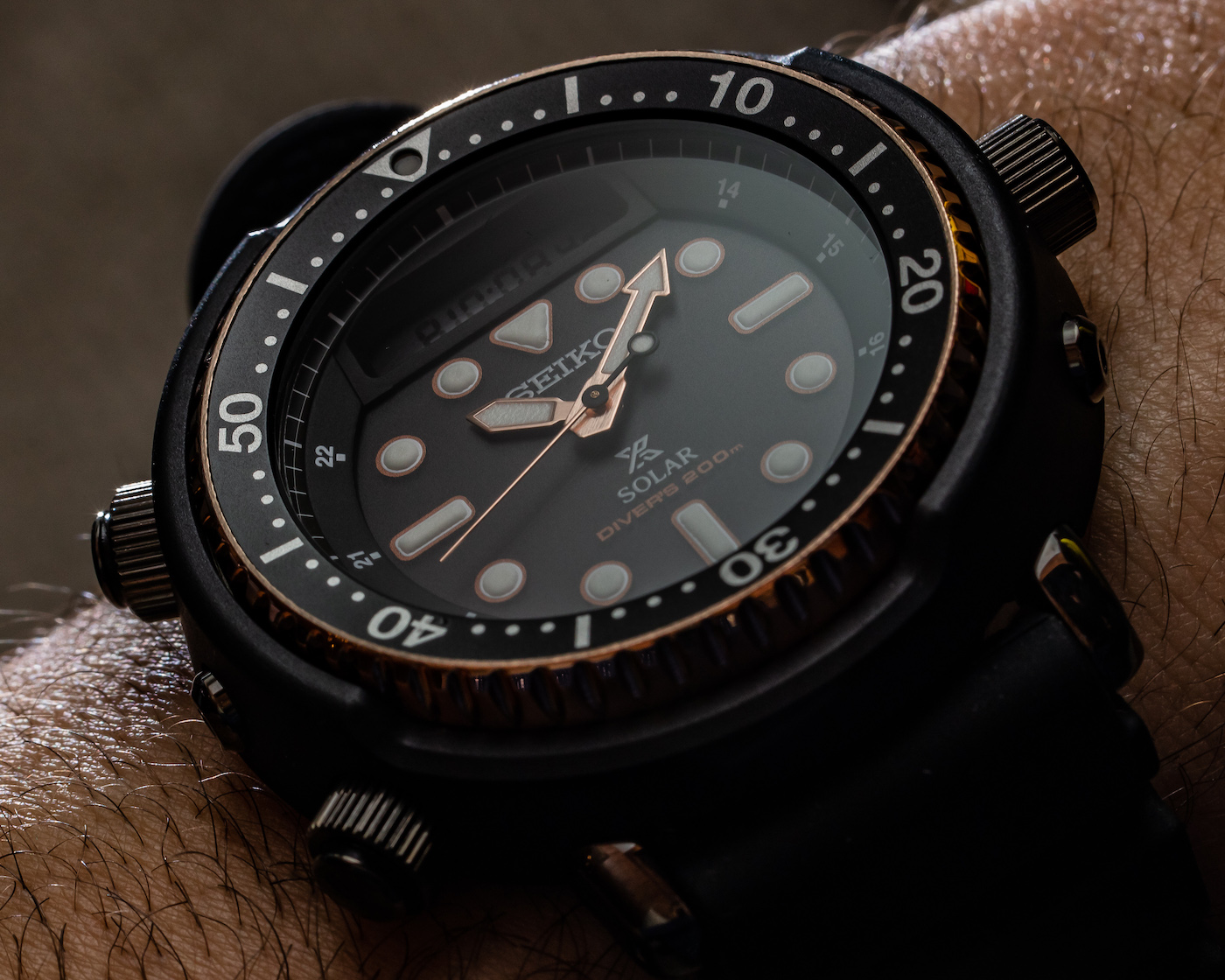 In terms of legibility, the new Seiko Arnie watches score high, but it must be said that those tiny hands are a drawback and will absolutely infuriate some watch fans. I can only imagine the hands have been so markedly stunted so they do not obscure the digital display when traveling past 12, but with modern electronic movement capabilities, I would have much preferred to see full-length hands that could be momentarily shifted out of the way of the digital display by the press (or even holding down) of a button (as is the case in the Casio Mudmaster Models). 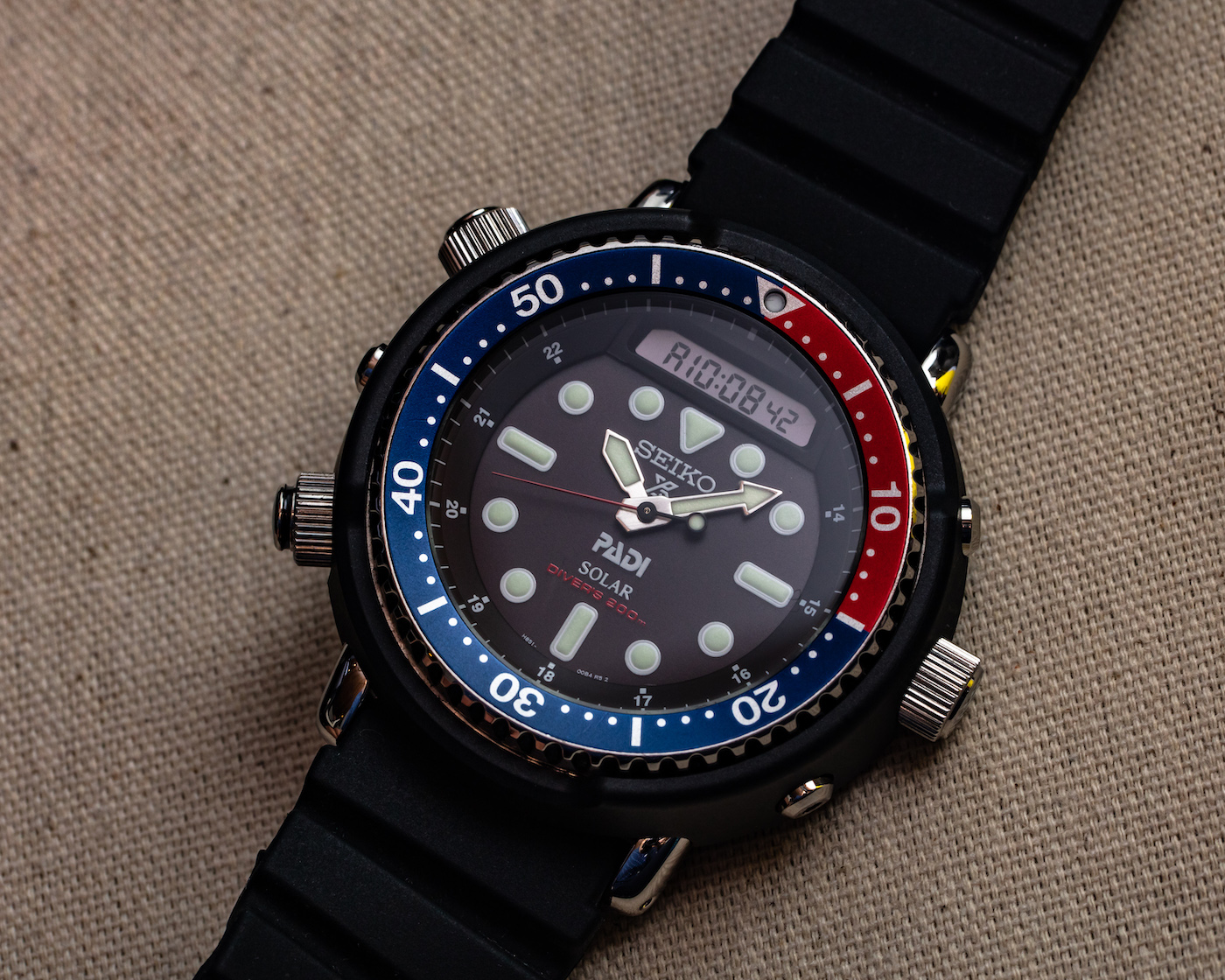 There are some subtle alterations to the dial text, which are, in my opinion, for the better. The text on the 1980s models was often yellow (and in other cases, a more orangey shade of red). Here, we have a much brighter red/orange being used on the dial beneath the newly installed “Solar” printing. It works with every colorway and, in my opinion, looks particularly striking on the otherwise monochrome iteration. The PADI-branded model (with the Pepsi bezel) is, while my favorite PADI watch from Seiko, my least favorite in this collection simply because it over-dresses a watch that flourishes thanks to its brutal functionality. 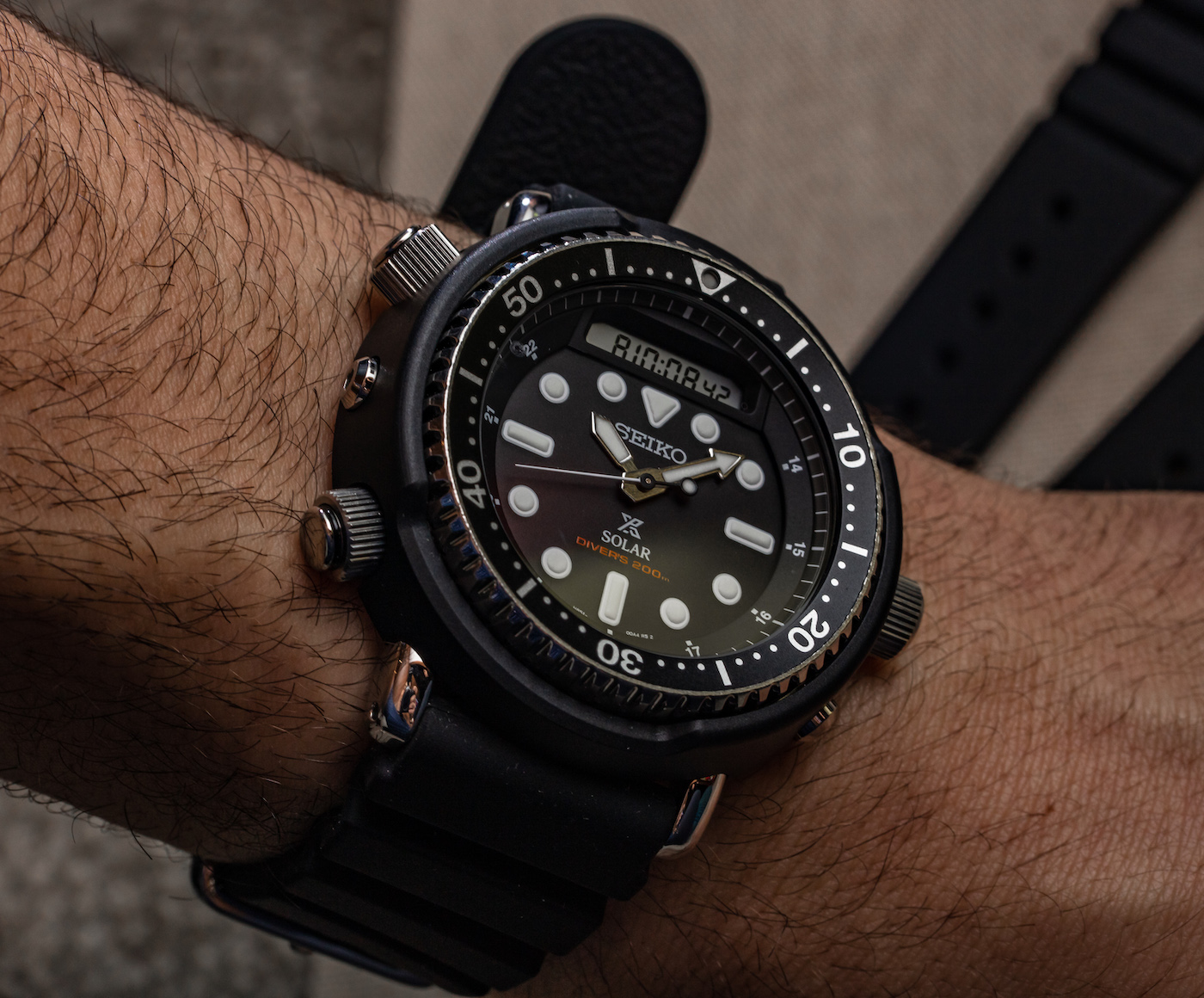 Another change can be seen on the chapter ring. The modern SNJ025 uses a 24-hour ring instead of a depth-meter, which is almost certainly of more use to more people than the previous allocation of space. A depth meter doesn’t actually tell a diver any “live” information about their dive, is merely a chart that tells the diver how many seconds they need to safely surface from a depth of up to 50 meters (if the rotating bezel is aligned with 12 o’clock). Pretty niche, and pretty academic — while it may look cool, a depth-meter is not much use to the majority of people to whom this watch will appeal. 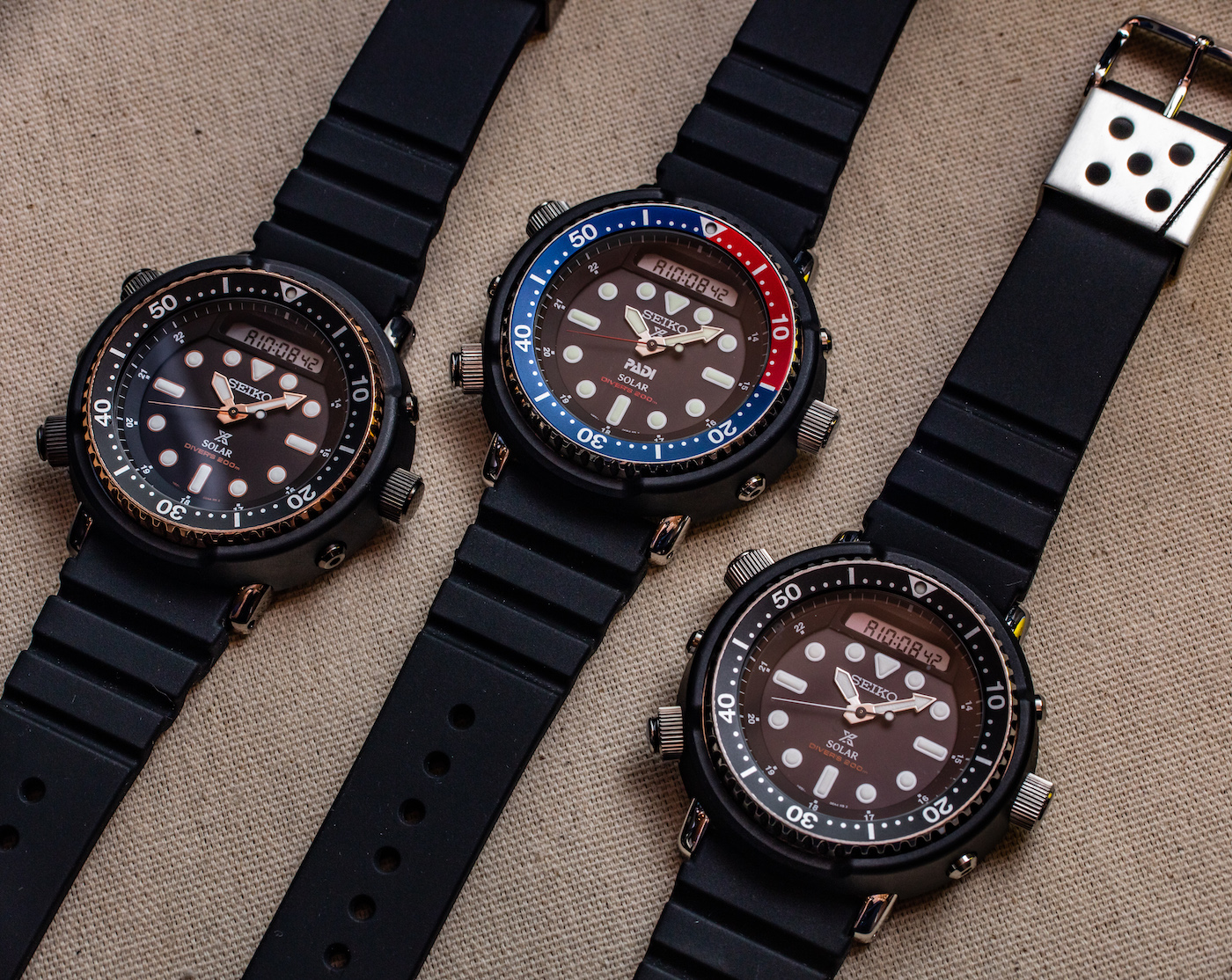 This means that, ultimately, this is a very solid, much-appreciated re-release of a treasured entry from Seiko’s back catalog, and a cool new reference to inspire the next generation of Arnie fanatics. The Seiko Solar “Arnie” SNJ025 and SNJ027 watches will retail for right around $520. There is no word on any planned limitation, so these pieces should be freely available, and given the relatively high cost of buying a vintage example in good condition, it is likely these updated and box-fresh units will fly off the shelves. Learn more about the ‘Arnie’ watch and Seiko brand history at seikowatches.com.