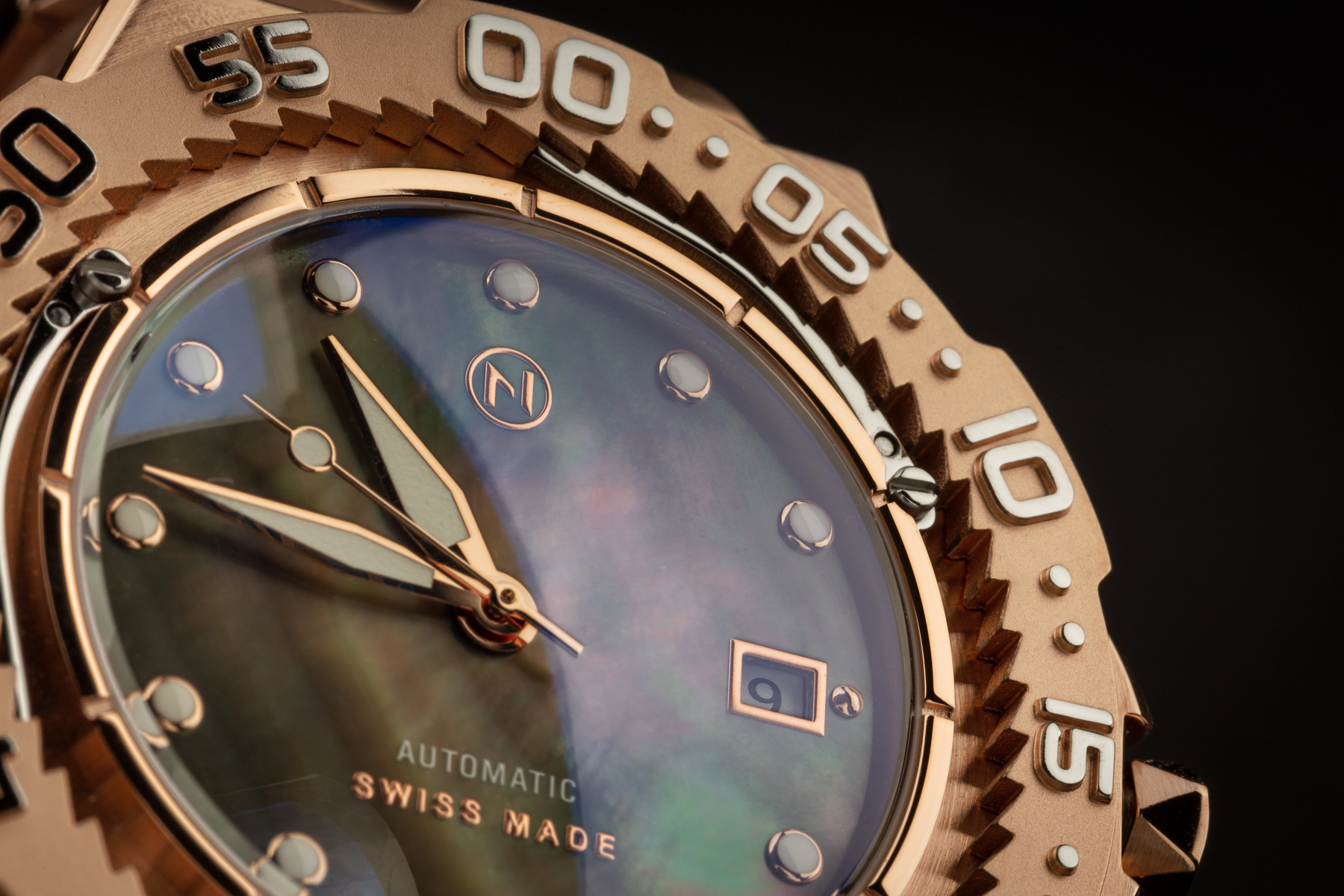 16 Comments
by SponsoredPost
Sponsored post presented on aBlogtoWatch by advertiser

Blurring the line between time-telling and fashionably accessorizing, Swiss microbrand NOVE is guided by the ideology that watches are more than just a temporal tool. They are a way of conveying personal style to the outside world — and also an affirmation of the aesthetic appreciation that everyone feels within. NOVE translates to “Fresh” or “Extraordinary,” and these terms stand as pillars upon which each timepiece is meticulously designed and constructed. Although a slim profile and respectable depth rating are not mutually exclusive where dive watches are concerned, it is a combination that can be elusive within the market. Recognizing this unfulfilled niche, NOVE has focused on filling the void with its newly updated Trident Automatic. 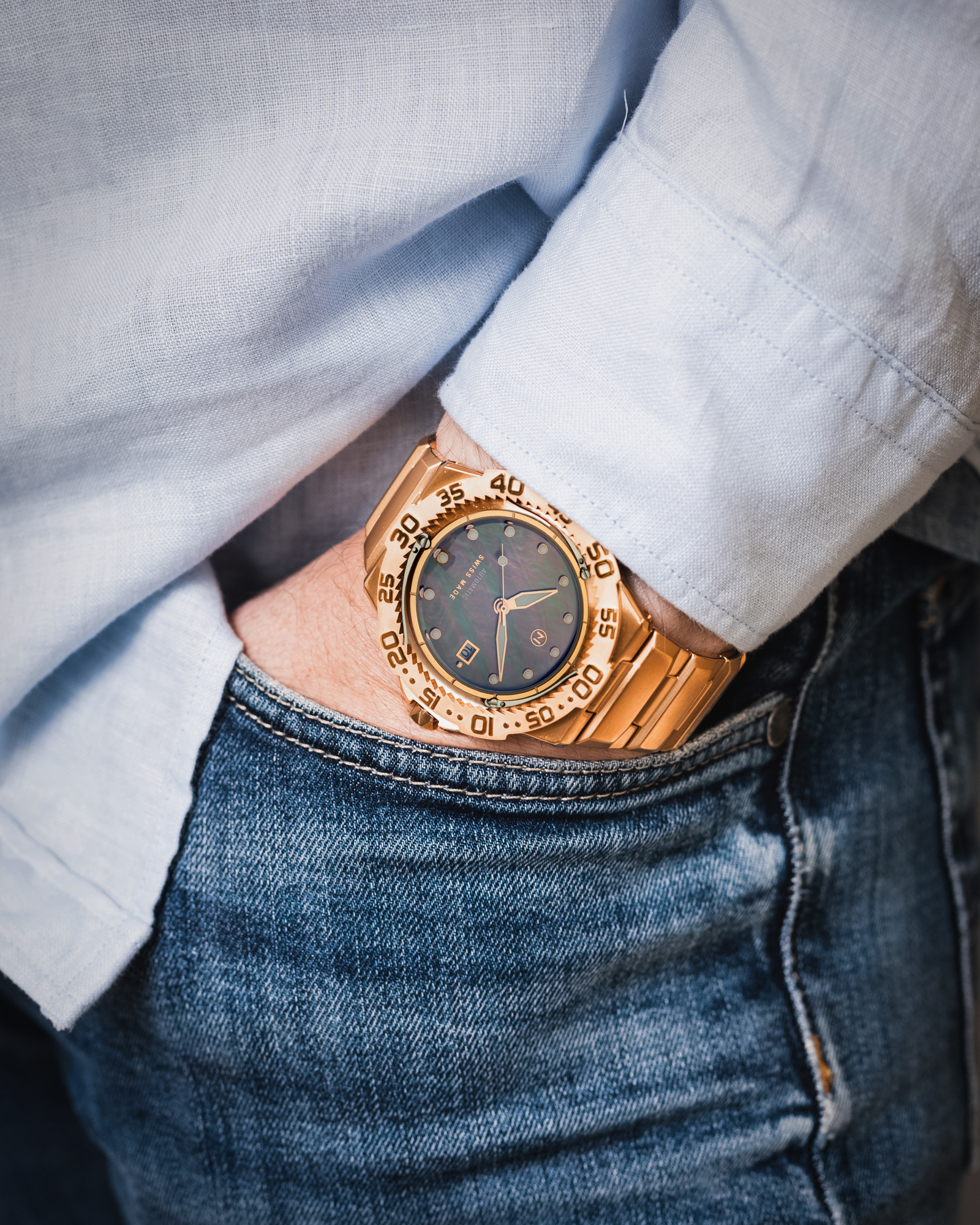 NOVE is an operation dedicated to creating new interpretations of classic horological aesthetics. Hailing from Geneva, Switzerland, the brand carries a reverence for the history of the industry while consistently seeking out new avenues to build upon this ever-growing legacy of quality. Though NOVE launched in 2015, it made waves in 2019 with the introduction of the Trident, the world’s thinnest dive watch. Through the use of a reliable Swiss quartz movement and some clever design choices, this 200m-rated razor measured just 6.8mm in total thickness. Now, just two years after the Trident first pierced the market, NOVE upgraded the timepiece with premium materials, as well as some functional improvements that will undoubtedly enhance usability beneath the swells. 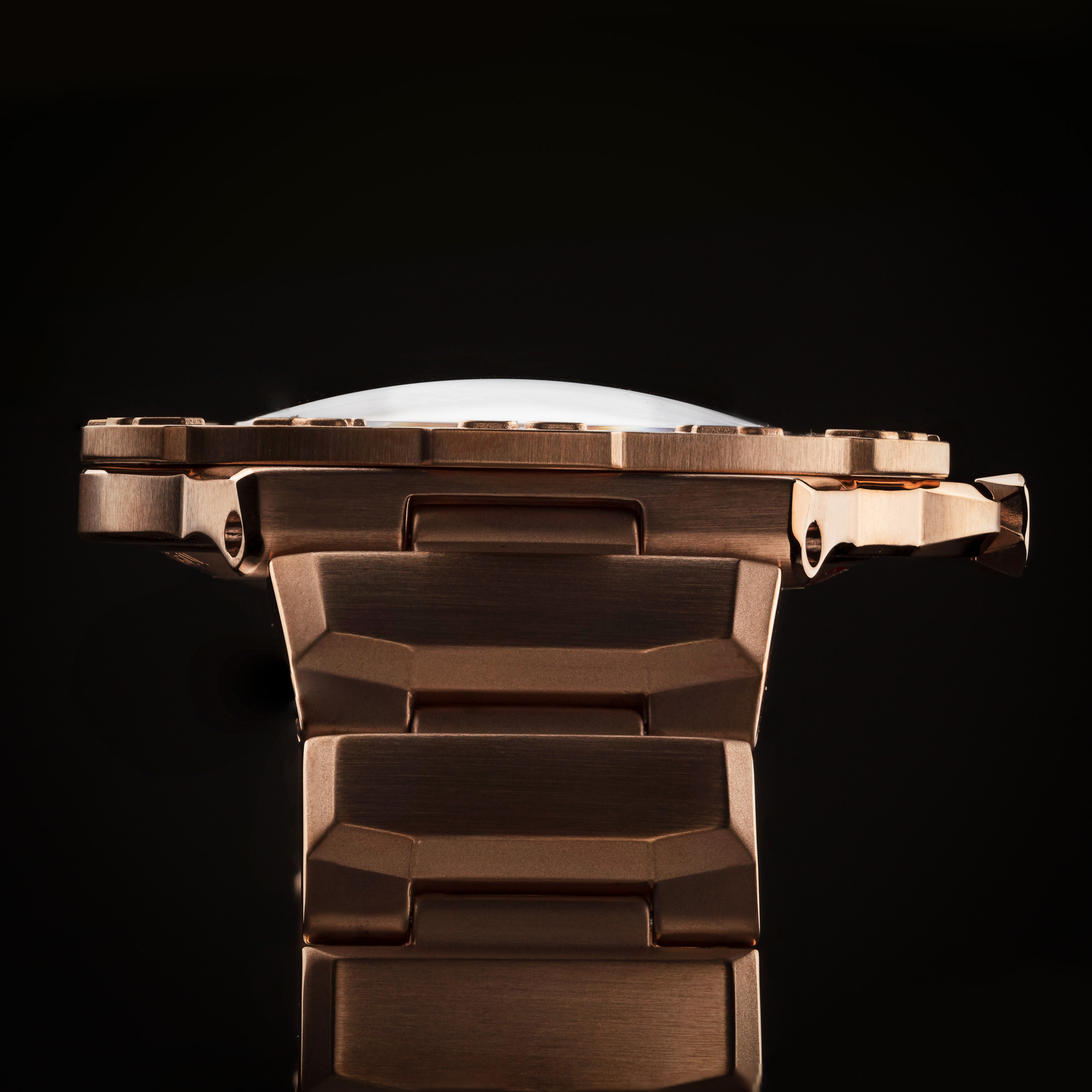 Further building upon a rousing claim such as “thinnest dive watch in the world” is a tall order. This svelte stance is the calling card of the Trident, so it follows suit that this nouveau NOVE should retain that quality. In order to accomplish this, NOVE has continued to utilize the same case, this time coupled with an automatic R150 self-winding movement. To accommodate the new powerhouse, as well as boost user experience, the crystal has been upgraded to a tall, double-domed sapphire. This brings the total thickness to just over 13mm without sacrificing the on-wrist comfort of the flagship Trident. Retaining a water-resistance rating of 200 meters, the mechanical movement can be viewed through the newly introduced display caseback. The decision to integrate domed sapphire into the front and back of the Trident yields an almost submersible-like appearance that is spot-on with the inspiration behind the model.

Continuing its three-pronged approach to functional improvement, other differences from the quartz-powered iteration of the Trident include the addition of a seconds-hand as well as generous Super-LumiNova application to the indices and hands. For this, those readers with dive experience are likely to breathe a collective sigh of relief. Naturally, with each meter you descend underwater, visibility lessens, and the merit of strong lume ( i.e., legibility) multiplies. In the same way, the lollipop-tipped seconds hand lets the wearer know that the watch is running as it should before and during a dive — an assurance that can be critical to those relying on this timepiece as a piece of equipment. 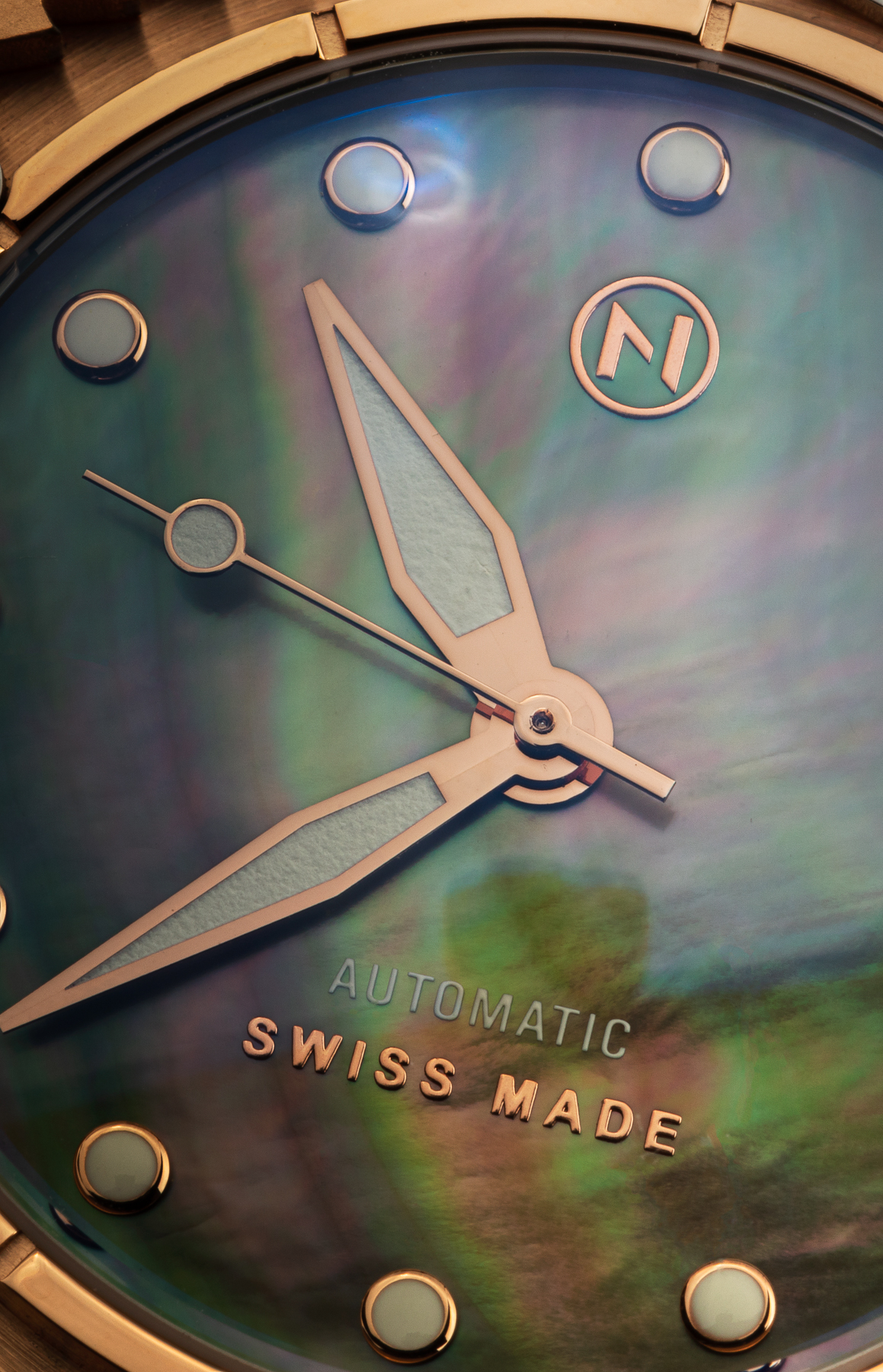 Setting aside utilitarian adjustments, NOVE is not a company known for taking the path of least resistance or following norms dictated by the industry. In line with this ethos, the Trident Automatic is available in four metal colors; stainless steel, black, gold, and blue. Fittingly, each has a dial that hails from the marine depths for which the watch was designed; they are comprised of Tahitian mother-of-pearl. This layer of the oyster shell takes two years to fully develop and makes for a resplendent opaline sheen.  Surrounding this stunning nacreous nucleus is NOVE’s patented three-lever rotating bezel with sharp numerals formed in relief. Measuring 46mm in diameter, the wrist presence of the Trident belies the leanness of the profile. Small guards protrude to protect the 3 o’clock crown, ensuring that the mechanism is sheltered from external trauma and remains watertight. The integrated bracelet tapers fashionably from the case to the butterfly clasp, creating harmony throughout the silhouette of the timepiece. 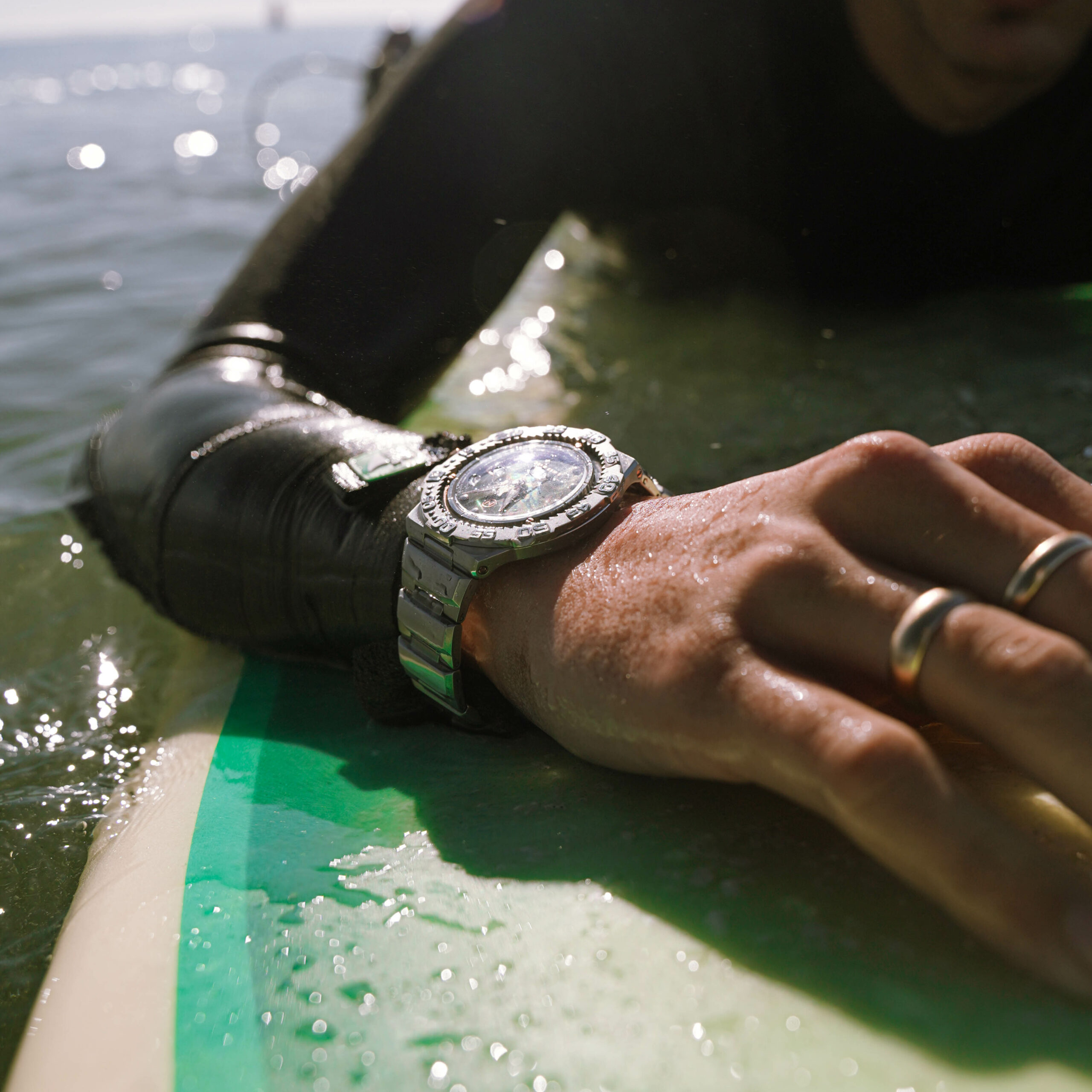 The automatic Trident from NOVE is currently in production and retails for $670USD in plain stainless steel or $690 for the three remaining color choices. Each piece also includes a two-year warranty. So, if you’re looking for a watch that allows for stylish self-expression without sacrificing the ruggedness and durability needed for day-to-day adventure, the Trident could be a perfect choice. In Greek mythology, Poseidon carried a gilded trident at all times as he ruled over his oceanic domain. Fortunately, there is little need for a three-tined spear in the 21st century, but the Trident by NOVE carries on the legacy of the sea god’s companion so that you can conquer the waves in your own way.