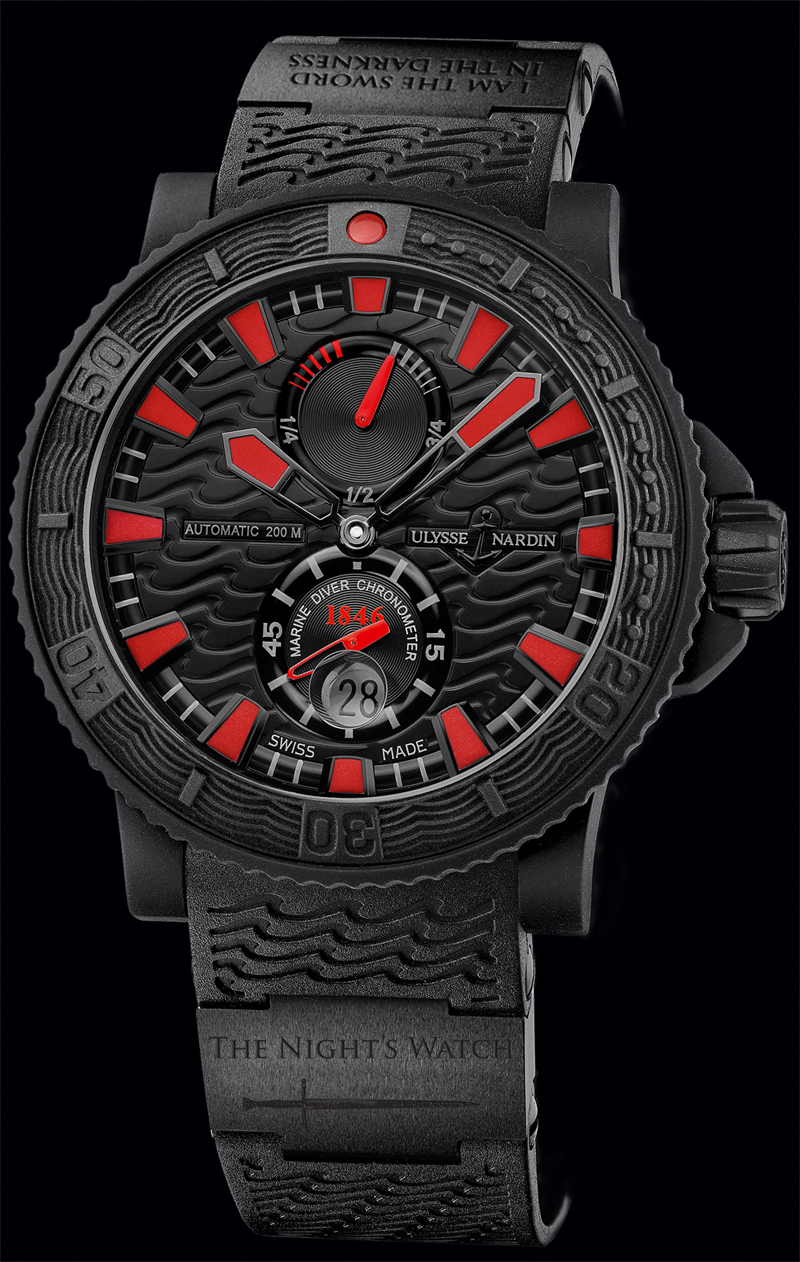 Thanks to watch maker Ulysse Nardin, The Night’s Watch now has a watch. Teaming up with HBO, Ulysse Nardin has produced a limited edition version of their Marine Diver for the Game of Thrones. The pre-mechanical fantasy medieval world now brought to life in the popular cable television show, now has a timepiece all its own. Just don’t expect to see the piece on the wrist of Jon Snow or other members of the celibate order of honorable men and prisoners who man “the wall.”

As an eager “watch spotter” when it comes to timepieces worn by characters in television shows that I like, I was resolved to the fact that there would be no timepiece identification opportunities in The Game of Thrones. Series author George R. R. Martin is probably more of a suspenders aficionado, but I bet he would like this. Actually, the author does wear a watch, but he wears it face side down under his wrist – so I can’t tell what it is. 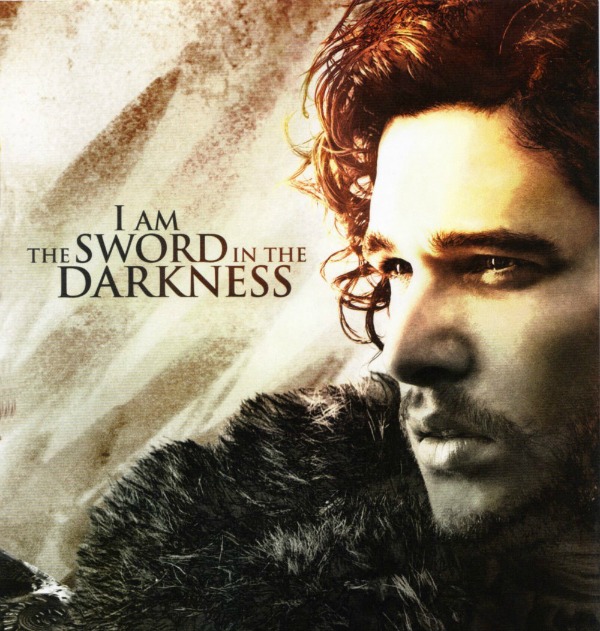 As a limited edition of just 25 pieces, this version of the Ulysse Nardin Marine Diver Black Sea has a few special Game of Thrones and Night’s Watch features. For the most part, it is a red accented version of the brand’s popular Marine Diver, here only slightly modified for The Game of Thrones and HBO. You can see an aBlogtoWatch hands-on look at the chronograph version of the watch here. The 45.8mm wide case is in steel coated with vulcanized black rubber. Rubber also coats the rotating diver’s bezel.

Red is used for the hour markers and hands as is the case with the standard Marine Diver Black Sea. Though for those who “take the black,” it might have been good to make the hands and hour markers accented in gray to create a better “all-black” phantom watch look to match the theme. Ulysse Nardin has a watch like this called the Marine Diver Black Ocean (as opposed to “Sea”). The names do get confusing for sure. 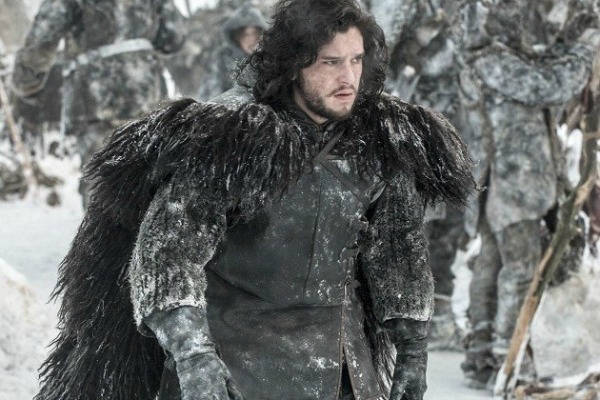 Attached to the watch is a rubber strap that has two ceramic links. This is where The Night’s Watch element comes in. On one of the links, Ulysse Nardin has engraved a “The Night’s Watch” logo with sword, and on the other link, The Night’s Watch motto of “I am the sword in the darkness” is engraved. It isn’t clear whether or not there is any Game of Thrones branding on the back of the watch. Features of the Swiss automatic movement include the time, subsidiary seconds, date, and power reserve indicator. 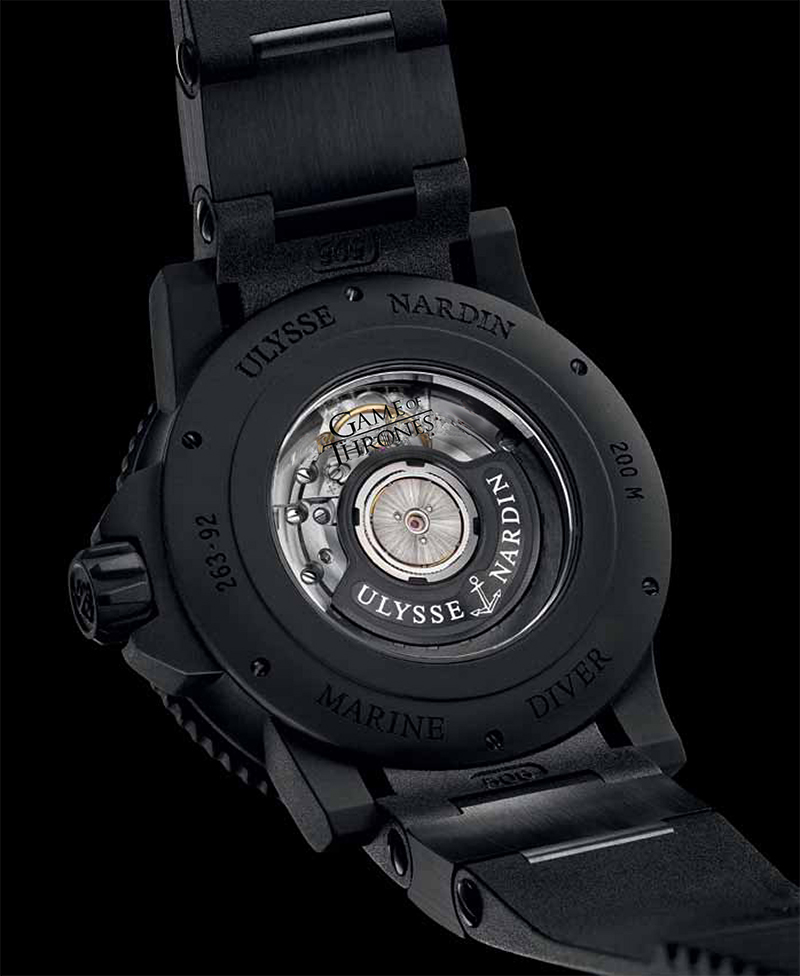 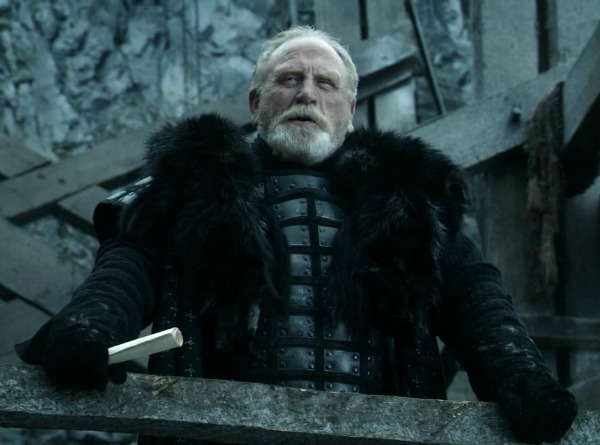 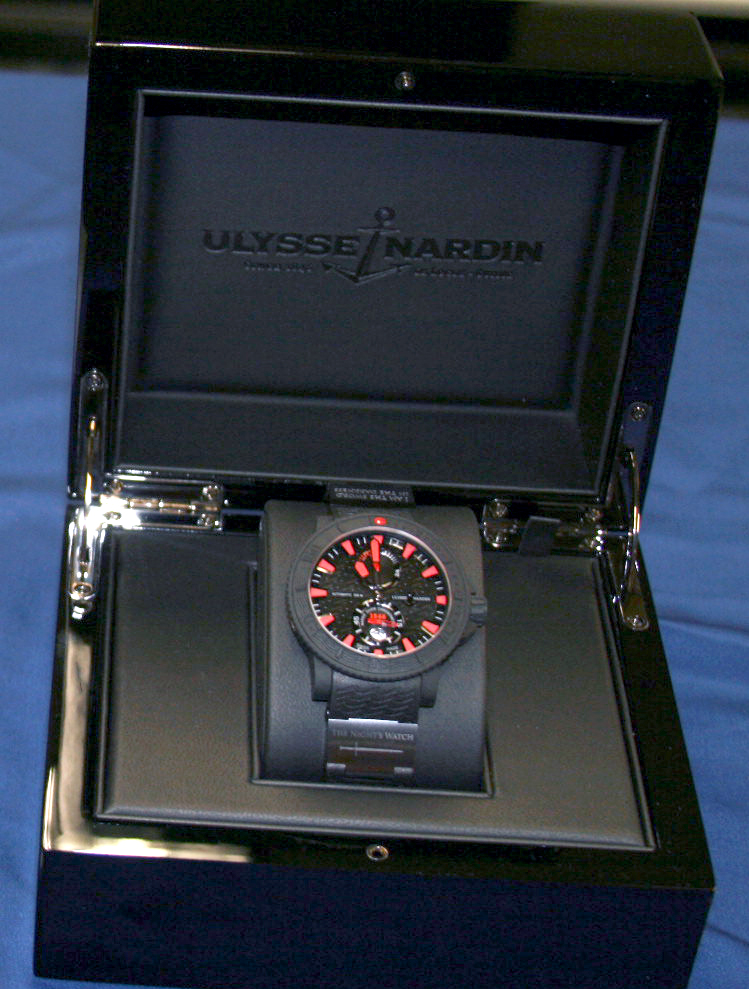 Ulysse Nardin will produce just 25 pieces of the limited edition Marine Diver Game of Thrones watch. Each of them will be available in just one of two stores. Both are in New York City, and they are Cellini Jewelers or the new HBO Shop (that will be located at 42nd St and 6th Avenue). Price for the watch is $10,500. Now who will make me some Game of Thrones armor, swords, and fur cloaks? ulysse-nardin.ch