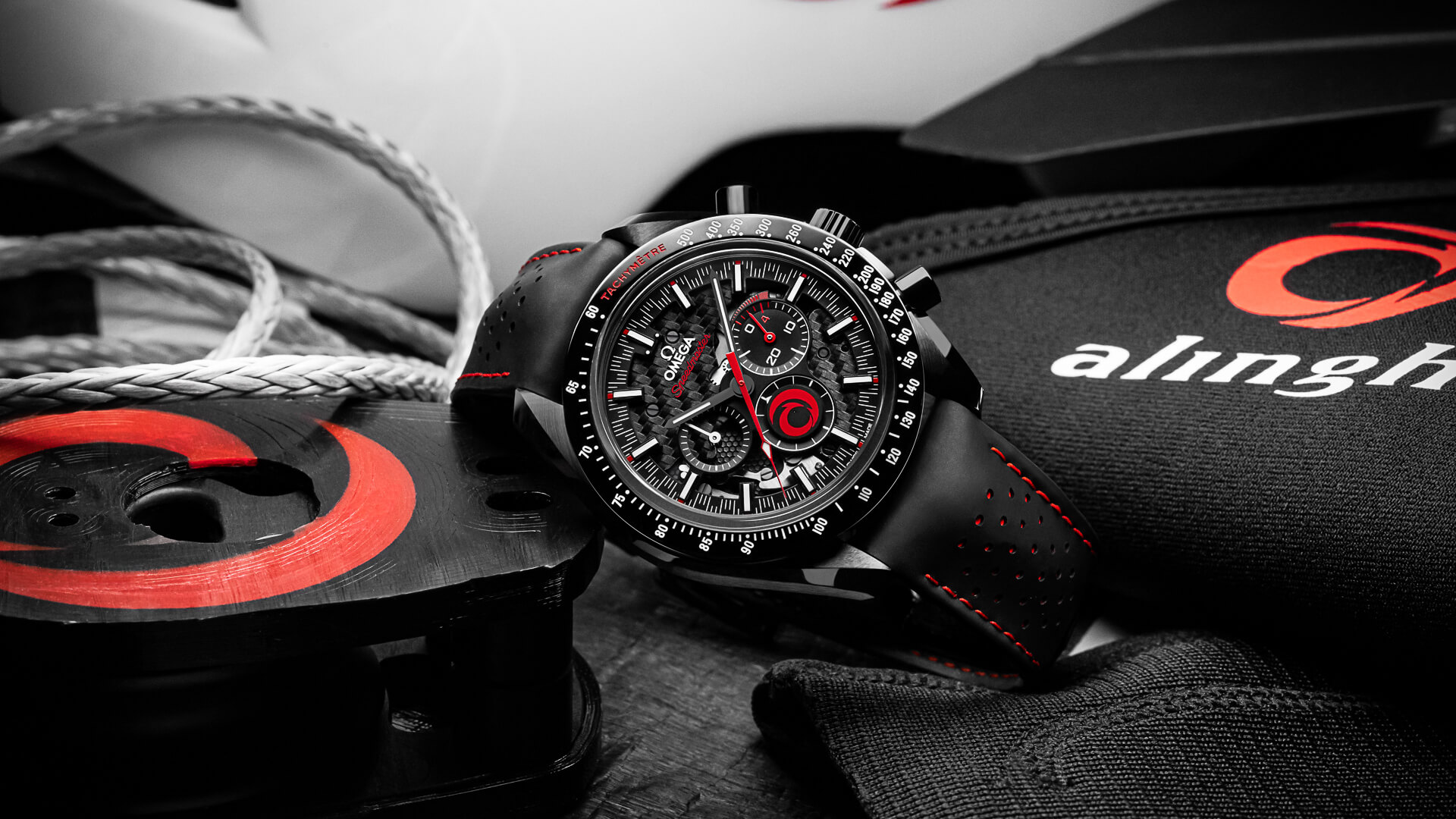 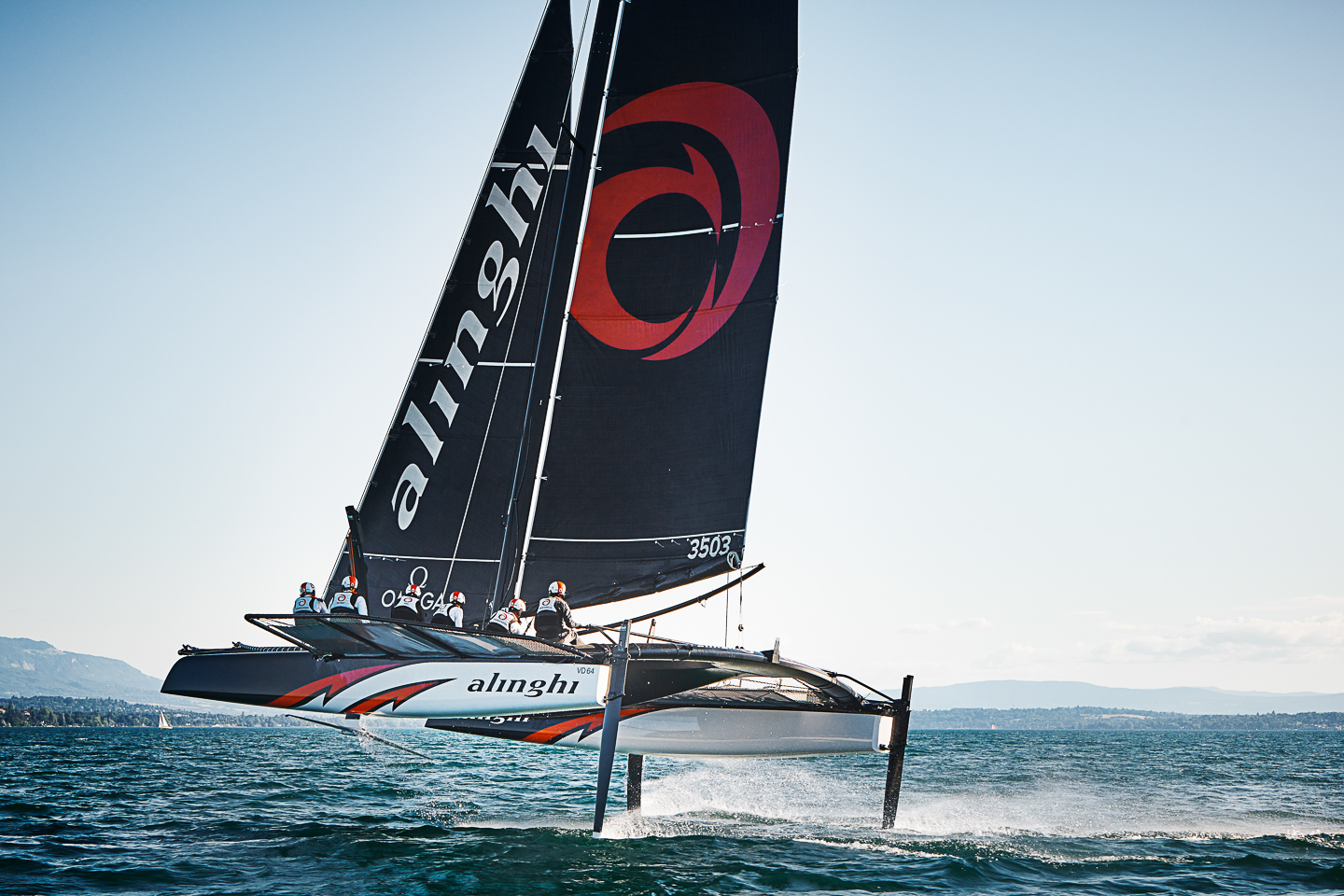 With multiple events on the year’s race calendar joining the long list of COVID-related cancellations, it’s been a choppy ride for the 2020 sailing race calendar, but that hasn’t stopped Omega from sailing on with not one, but now two unique seafaring watches for the crewmen of the two teams it’s sponsoring. Back in May, we were first presented with this special-edition Planet Ocean built to commemorate the 36th America’s cup and to be worn by the New Zealand ETNZ team, which Omega has long supported. And now we’ve got a limited new ceramic Speedmaster Dark Side of the Moon that flies the flag for Omega’s newest sailing partnership: Switzerland’s very own team Alinghi, who joined the Omega family in 2019 after concluding a long tenure with Audemars Piguet. 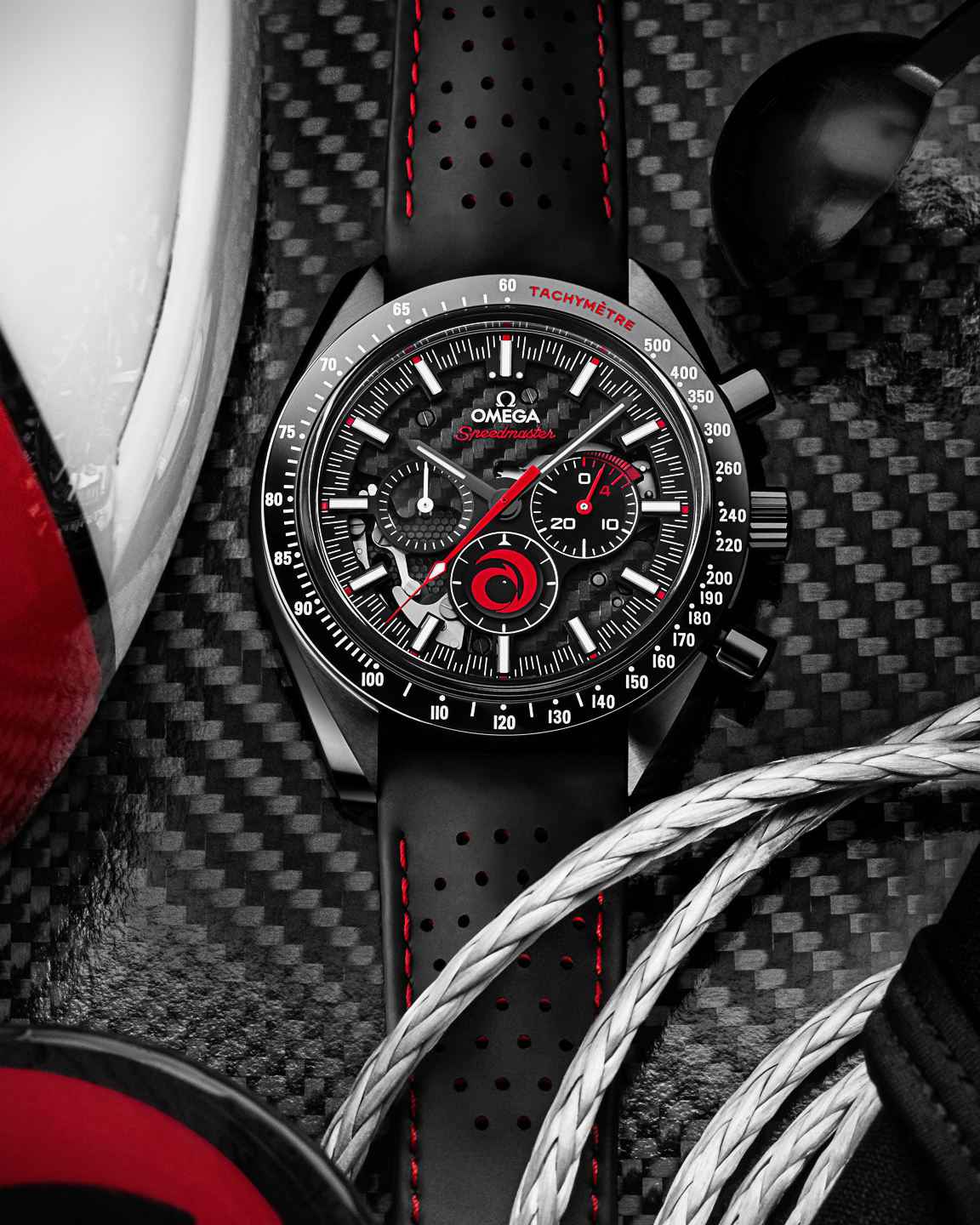 If this new reference looks a lot like 2018’s Dark Side of the Moon ‘Apollo 8’ edition, it should – it’s the same case and movement, embellished with a whole host of design elements that pay homage to the Lake Geneva-based Alinghi sailing team – starting with a carbon fiber dial, the likes of which we haven’t seen on a Speedmaster since the titanium Solar Impulse GMT from the early aughts. But I’ll come right out and say it: the Speedmaster is a lot of things, but it is rarely a sailing watch. As far as I can tell, only once before with the X-33 Regatta produced for the New Zealand ETNZ sailing team back in 2017. Omega does indeed have a long history of producing various regatta and yacht-timing watches with unique complications and unconventional time displays, but they have understandably remained almost exclusively in the Seamaster collection. Even still, the venerable Speedy does make a lot of sense in this capacity – long before it was a moon watch, it was a racing watch built to calculate speed by measuring time over distance. And even in this application, it can certainly still excel. 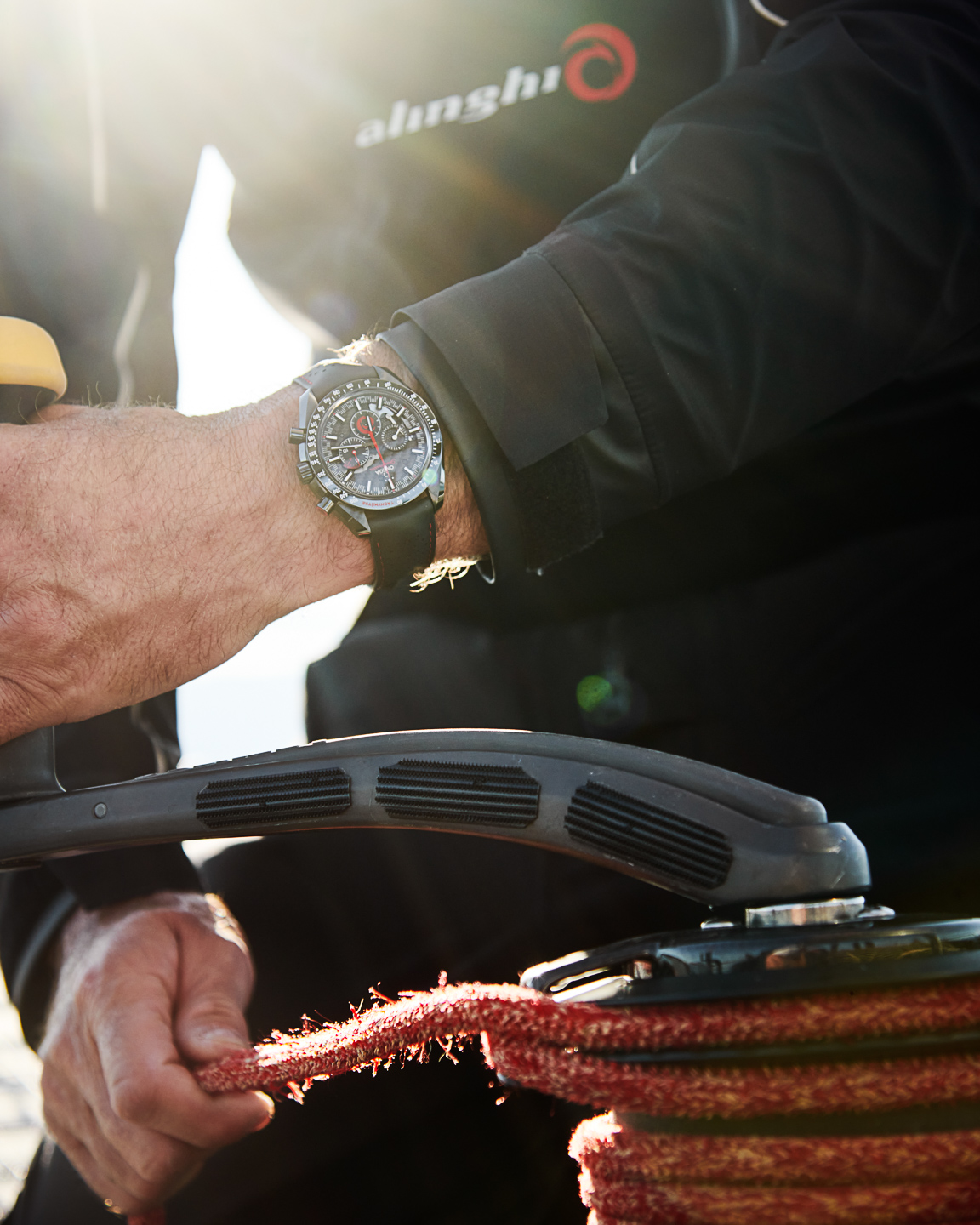 Now, it might have have been awfully cool for the luminous tachymeter scale to read in nautical knots rather than the traditional land & air-based miles-per-hour scale now emblematic on the Speedy, but other embellishments have been made to accommodate the Alinghi crewmen: particularly the 30-minute totalizer at 3:00 which places a greater emphasis on its first five minutes, enabling the skipper to dial in his starting sequence and hit the start line at just the right moment. The 12-hour totalizer at 6:00 is swapped out for a red anodized disc in the shape of Alinghi’s logo – a cardinal triangle at the top of the disc lets the viewer know when it has been zeroed, or how many hours have elapsed since the chronograph was started. Another neat team callout exists on the dial and caseback, where Omega’s once again deployed its laser-ablation techniques (where lasers are used to remove surface material to produce a honeycomb effect on the mainplate and barrel bridge, not unlike the pattern that comprises the carbon fiber skeleton of the hull of Alinghi’s TF35 catamaran. 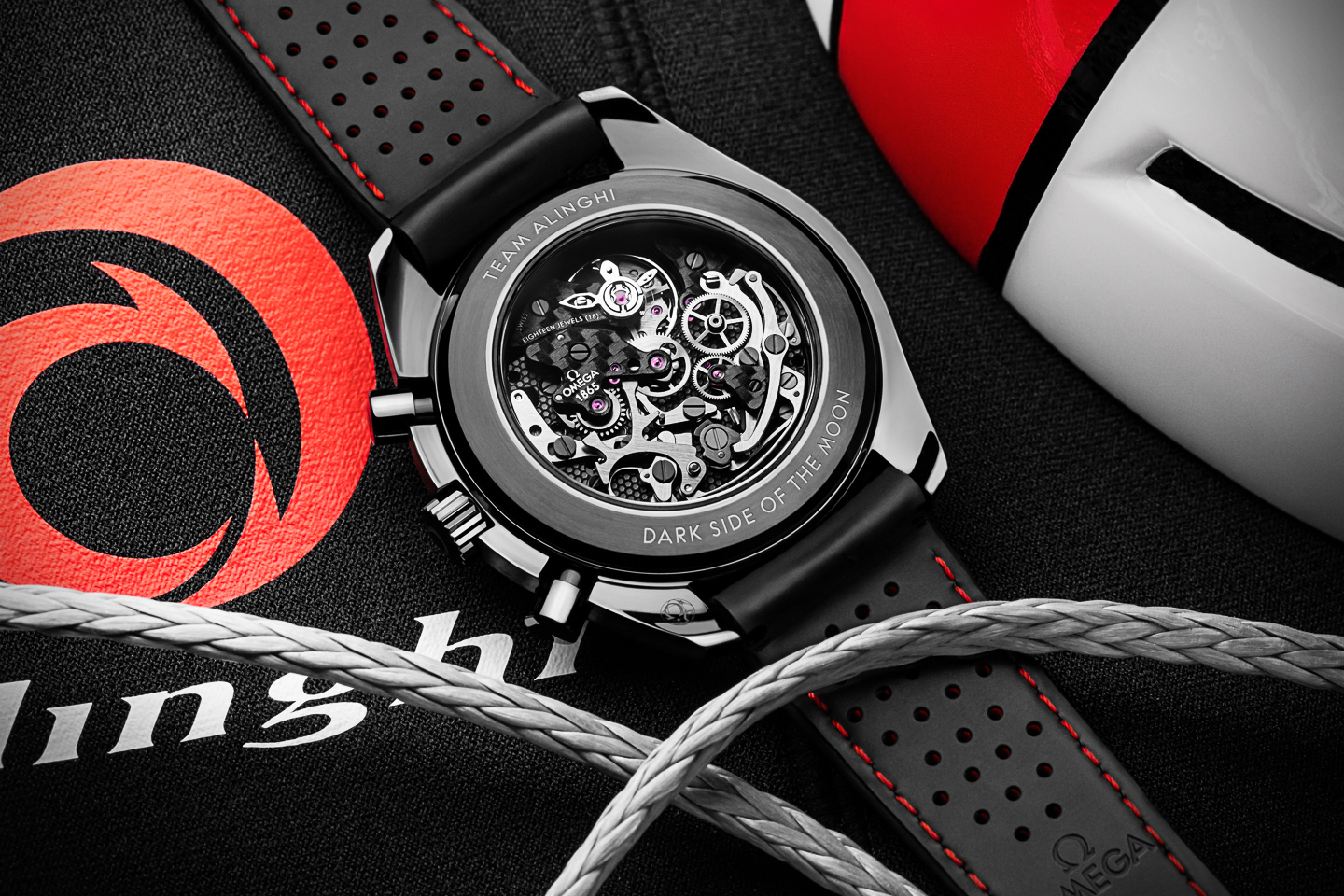 With the exception of the cosmetic updates though, the new Dark Side of the Moon Alinghi edition is built around the same 44.25mm ceramic case footprint as the DSOTM ‘Apollo 8’ edition, which is also powered by Omega’s manually-wound cal. 1865. This is naturally a much thinner movement than the Co-Axial calibre 9300 used in the standard automatic Dark Side of the Moon variants, enabling the Alinghi (and the Apollo 8) to wear surprisingly well for its broad, but lightweight case – a lower-profile silhouette that would likely prove preferable over something that could snag on any given number of the boat’s sharp-edged surfaces during a race.

Once again, like 2018’s similarly styled Speedmaster Apollo 8, the new Alinghi Limited Edition is priced accordingly at $10,800 USD – roughly a $1000 premium on the aforementioned, though likely to account for Omega’s long-rumored price increase due at the end of this summer. Learn more at omegawatches.com