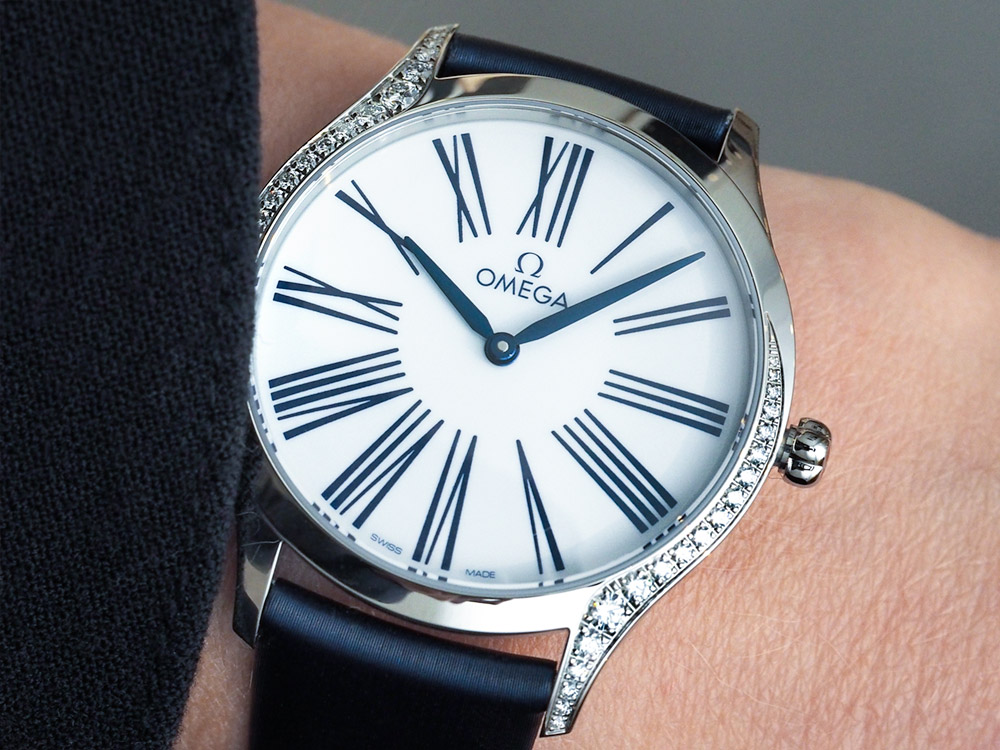 The word trésor means “treasure” in French, and it is the name of Omega‘s new collection of ladies’ watches. The sub-collection, actually, of the De Ville family isn’t new in name, but they are new in some other ways for Omega. The Omega De Ville Trésor ladies watch comes in a couple of sizes and a range of styles with different case materials, dial colors, and straps. All include diamonds, but options in stainless steel help keep prices more reasonable for more people. 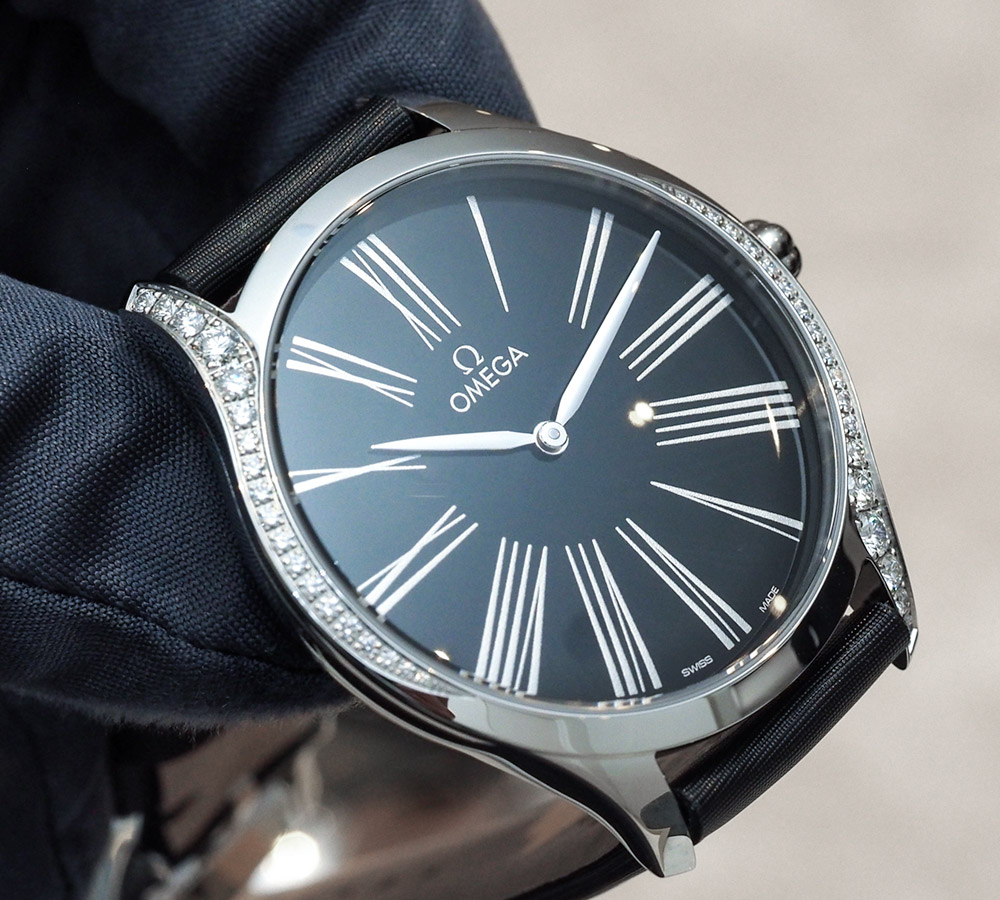 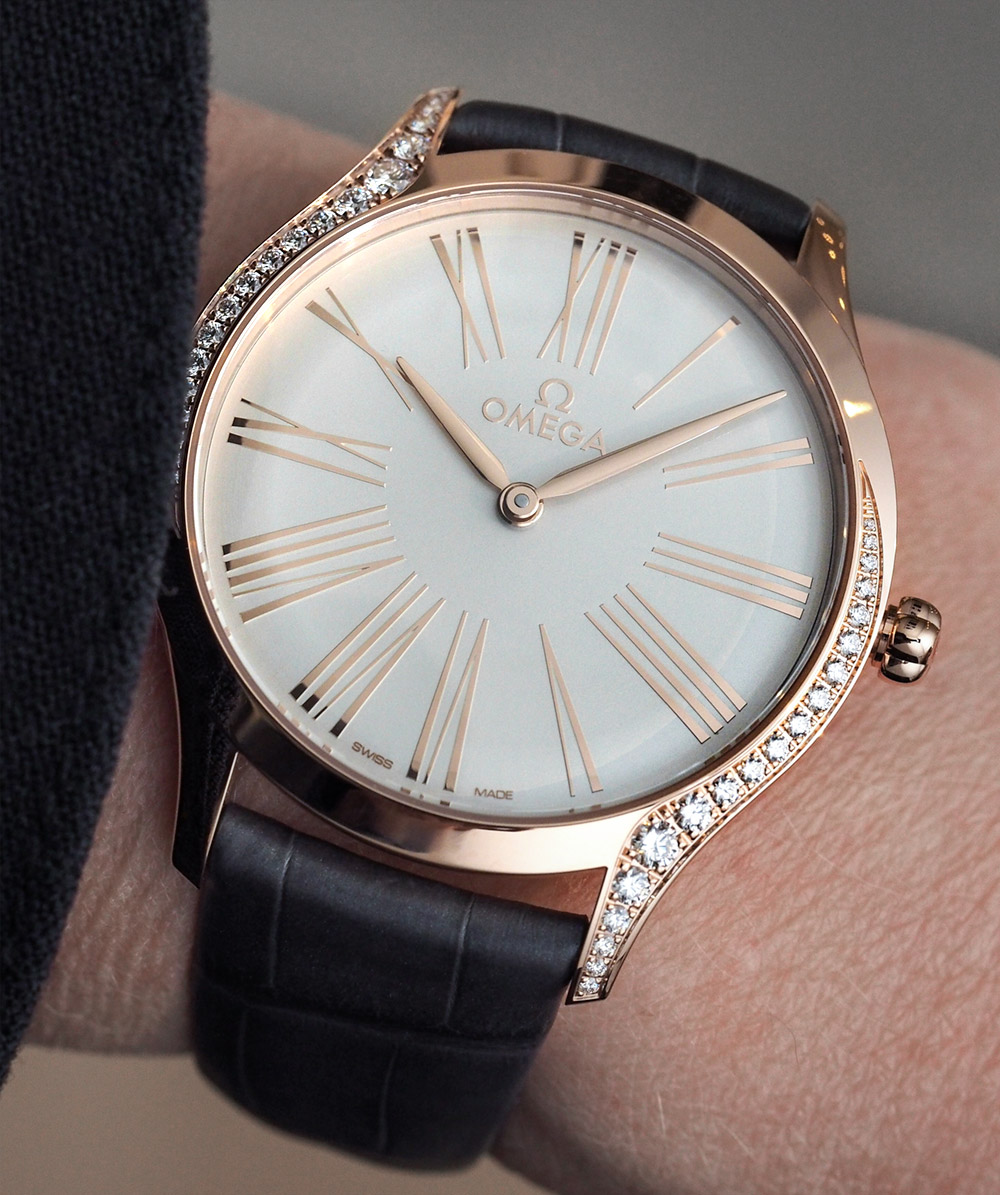 Applied to a ladies’ watch, the name Trésor seems totally natural and appropriate, but the Omega De Ville Trésor has existed as a somewhat overlooked limited-edition men’s watch since 2014. A ladies’ version was also added, but it stayed consistent with the men’s version’s traditional, retro styling. Omega explains that before the 2014 De Ville Trésor, the term was first used at the company in a 1949 watch in reference to the movement – the “treasure” inside, I guess. It’s a bit ironic since the quartz movement in the new Omega De Ville Trésor ladies’ watch isn’t really emphasized or special. The 2014 Omega De Ville Trésor, on the other hand, did feature an impressive Omega Master Co-Axial Chronometer (or whatever they are calling it nowadays) movement. 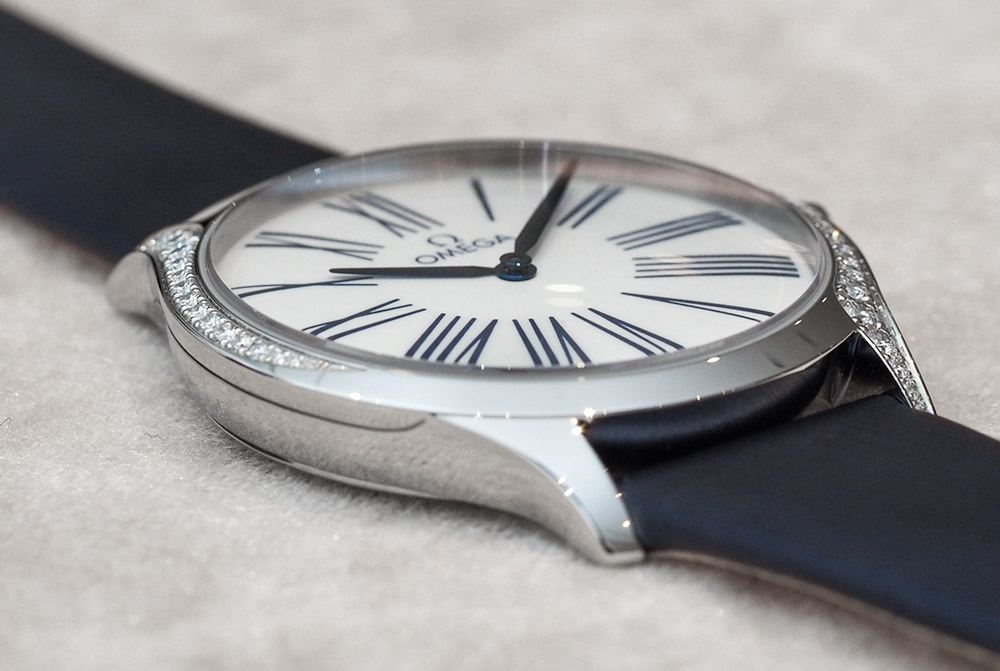 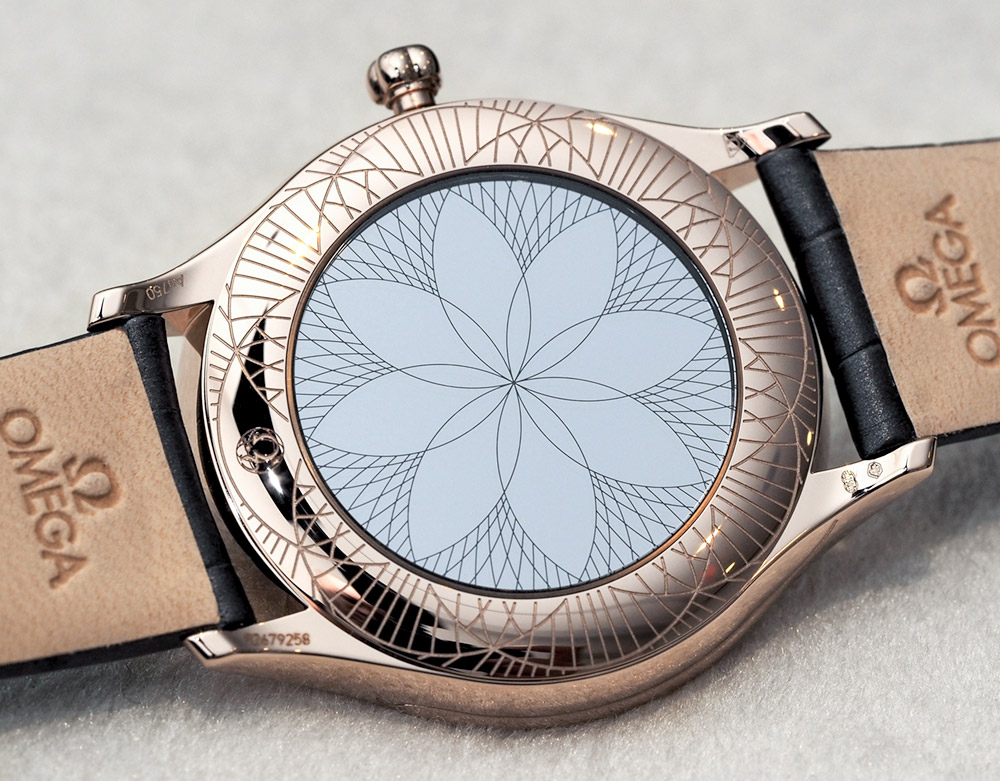 The 2017 Omega De Ville Trésor uses a caliber 4061 quartz movement found in a number of Omega ladies’ watches to keep them thin, narrow, quartz-accurate, and hassle-free. It has a 48-month battery life as well as a “red Omega logo with rhodium plated parts and circular graining” – though you won’t be seeing that regularly as this Omega De Ville Trésor has a solid caseback with a mirror and laser-etched floral motif. 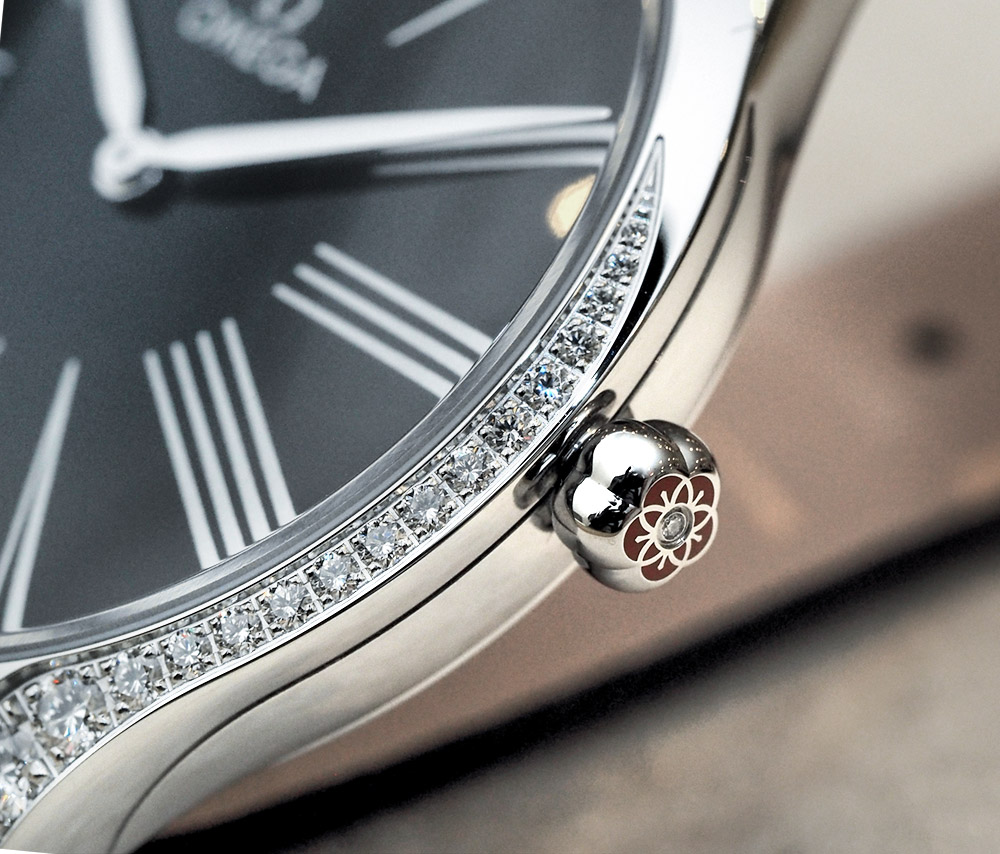 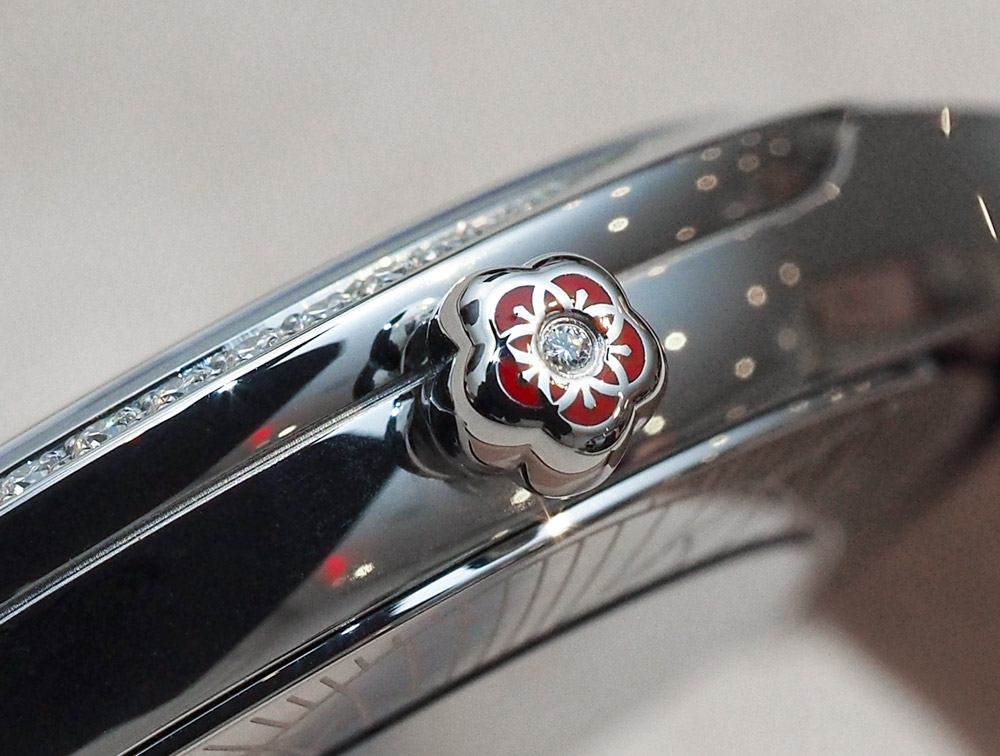 The round case is available in 39mm (9.75mm thick) or 36mm (8.85mm thick) versions in polished steel or 18k Sedna gold and a range of dial colors – it appears for now that the Sedna gold version only comes in 36mm. The flowing shape of diamonds on opposite corners of the case as well as the elongated Roman numerals and slim hands are what define the overall look of the Omega De Ville Trésor ladies’ watches, but details like the crown’s red “liquid ceramic” flower with a diamond in the middle make the design more refined and satisfying – in my opinion, at least. Omega says the crown is polished with “HyCeram” to make it more “lustrous.” 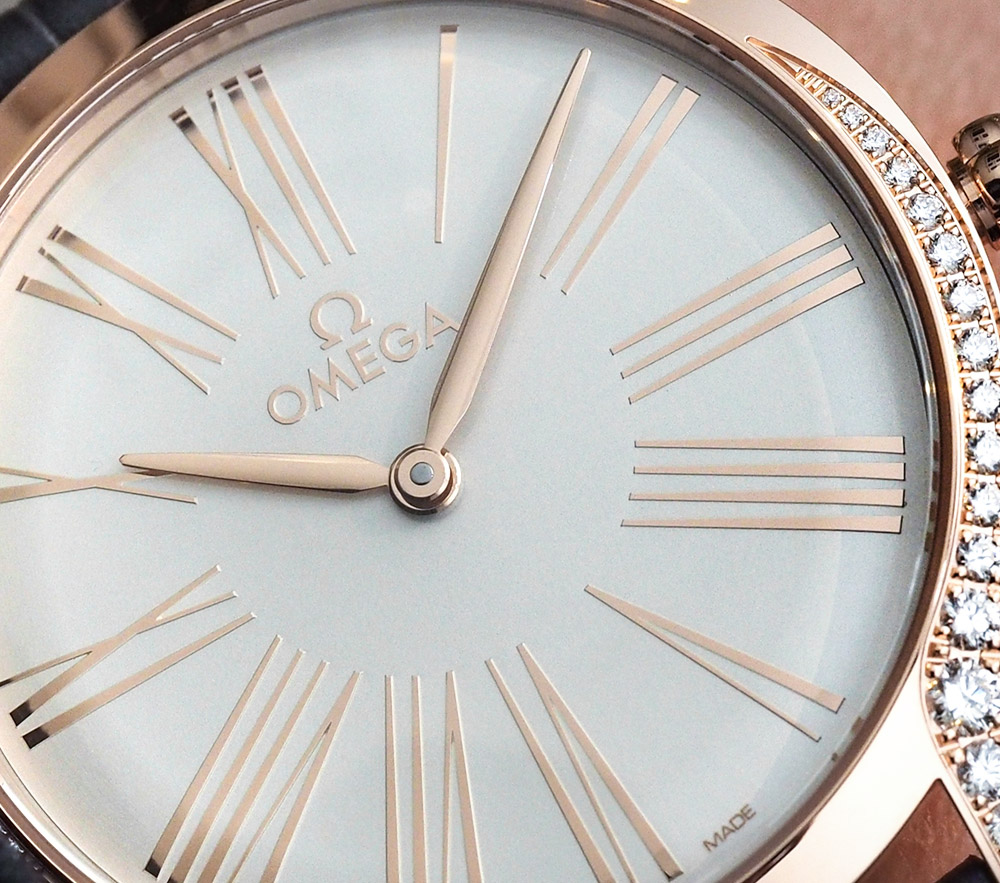 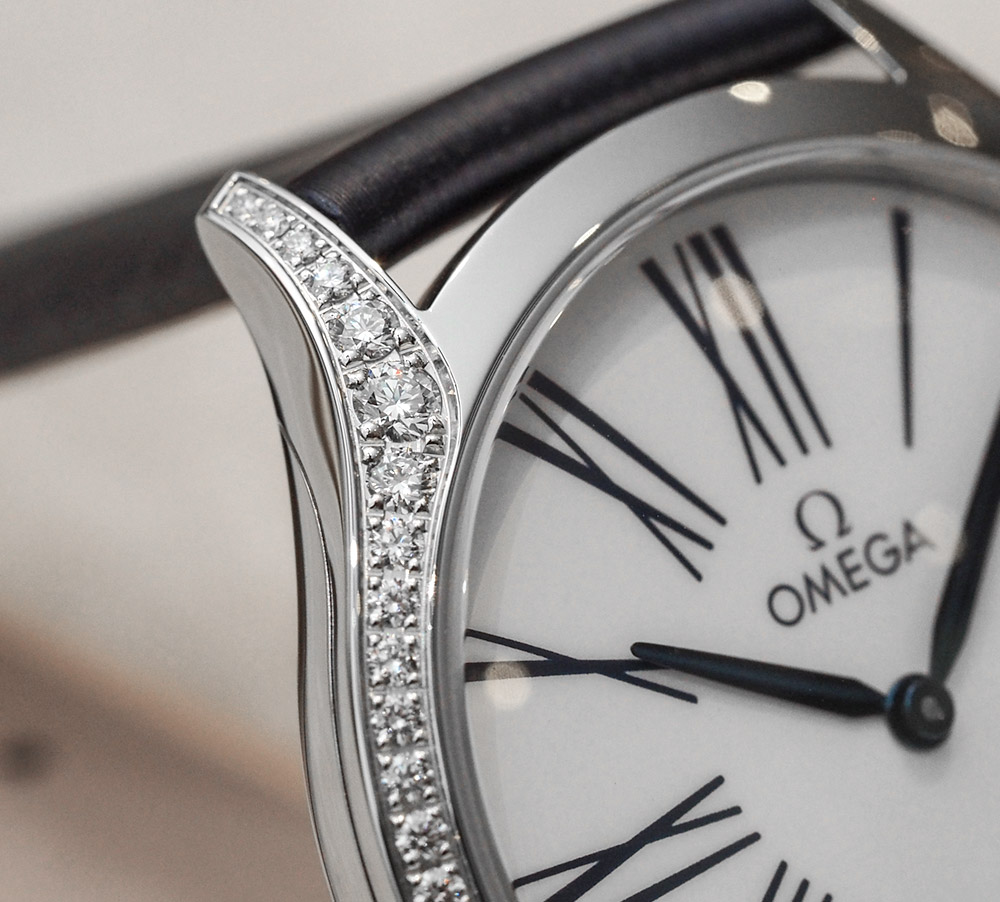 Some design elements here might feel familiar or reminiscent of certain other ladies watches. In steel, however, the Omega De Ville Trésor is considerably less expensive than, for example, the Piaget Limelight Gala with a similar visual swirl of diamonds in the asymmetric lugs, significantly more of them, and set in precious metal cases. Is it me or is almost every conceivable shape, font, etc. already claimed by some watch or brand that makes every other use of anything similar look unoriginal? Does Cartier “own” Roman numerals, for instance? Well, they kind of do, I guess… 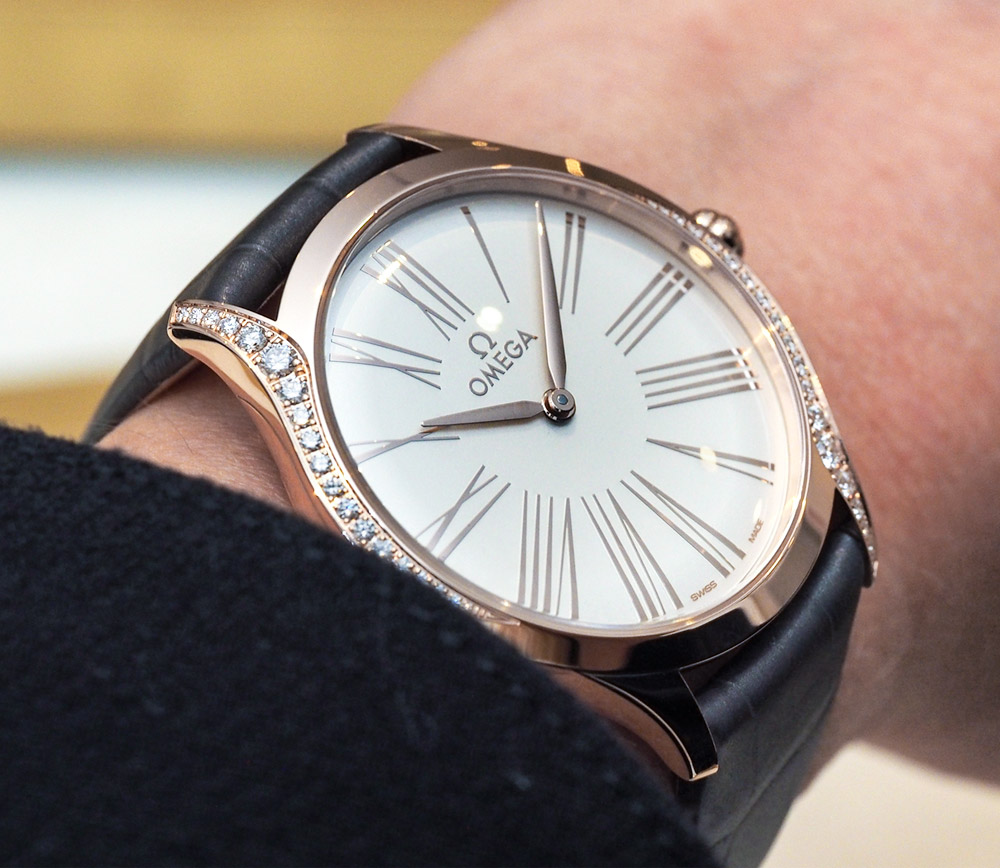 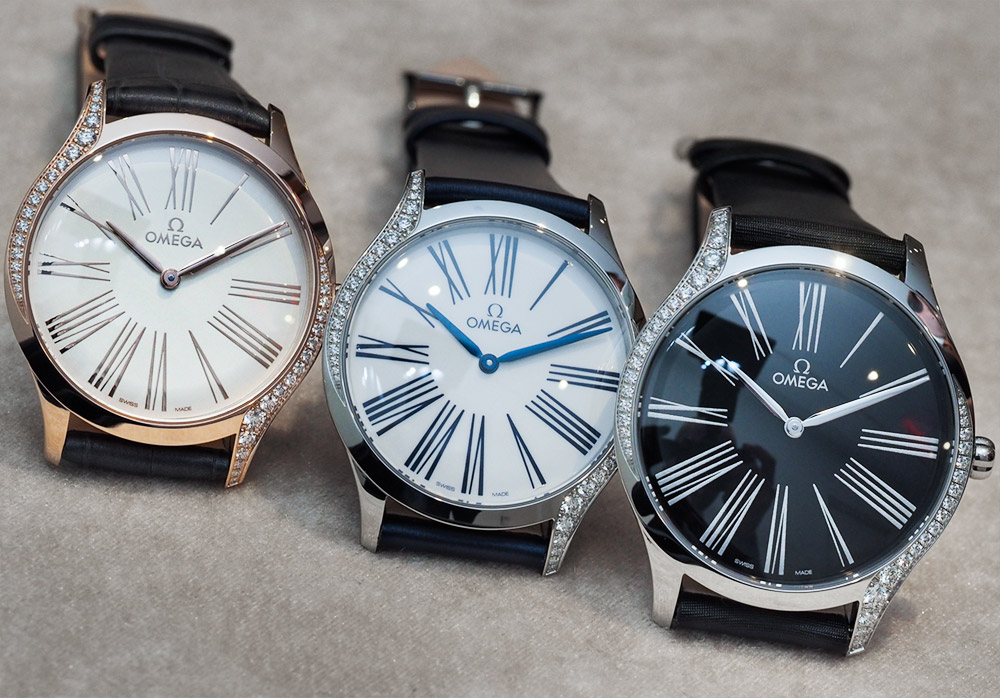 I personally think the Omega De Ville Trésor watches look perfectly elegant and fresh – and even though I can’t afford them as a gift right now with quartz anyway, they’d theoretically be more interesting to me with one of Omega’s great mechanical movements. Launched exclusively in the US and Japan for now, the 36mm Omega De Ville Trésor in steel will have a price of $4,500 and the Sedna gold models have a price of $8,600. The 39mm steel models all are priced at $5,100 except one version that uses gold hands and markers with a price of $5,600. Now that Omega has launched e-commerce for their US website, as we recently covered, you can find not only more details about individual models there, but also pricing, and an option to purchase directly. omegawatches.com