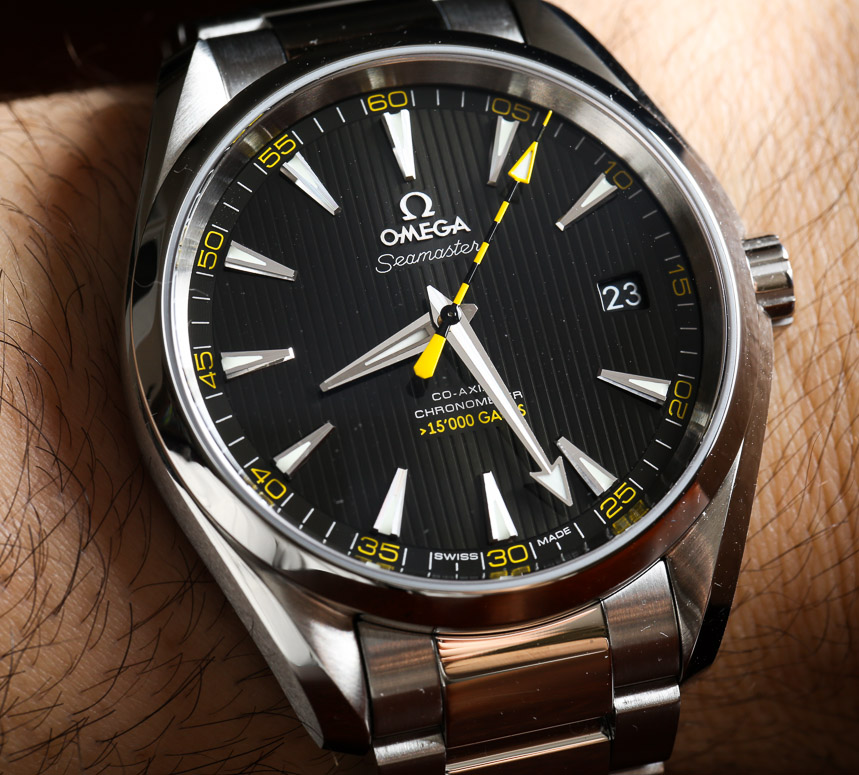 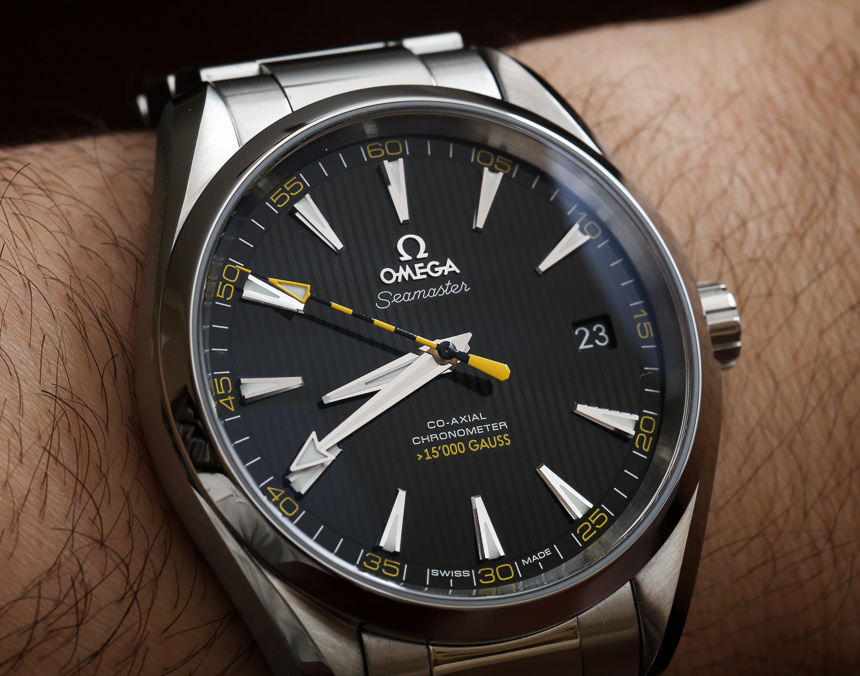 Omega is pretty tight-lipped about all the little details when it comes to what materials they are using for the new in-house made Caliber 8508 automatic movement. Of course, it is built on the 8500 movement family but has some unique parts. Omega even made aBlogtoWatch sign a document promising not to even open up the watch as the details on the components are being protected.

We of course know some things, such as the non-magnetic nature of silicon–which is used in the 8508 movement. Silicon is used for the balance (hair) spring. Another new material used in the 8508 is material Omega named Nivagauss, which makes up most of the movements staffs and some other small parts. At least two other unnamed non-magnetic metals or other materials are used in the movement. Omega may be guarded on the nature of these materials but nothing is hidden about the movement. While we haven’t studied the caliber 8500 movement right next to the 8508 movement, they appear to be very much the same in appearance. 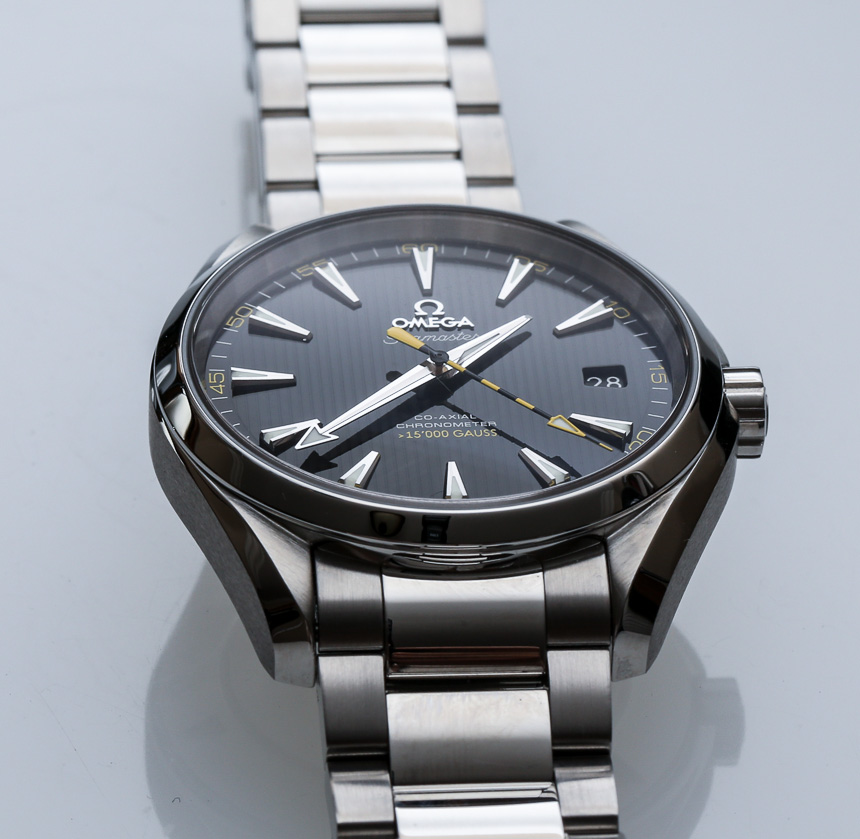 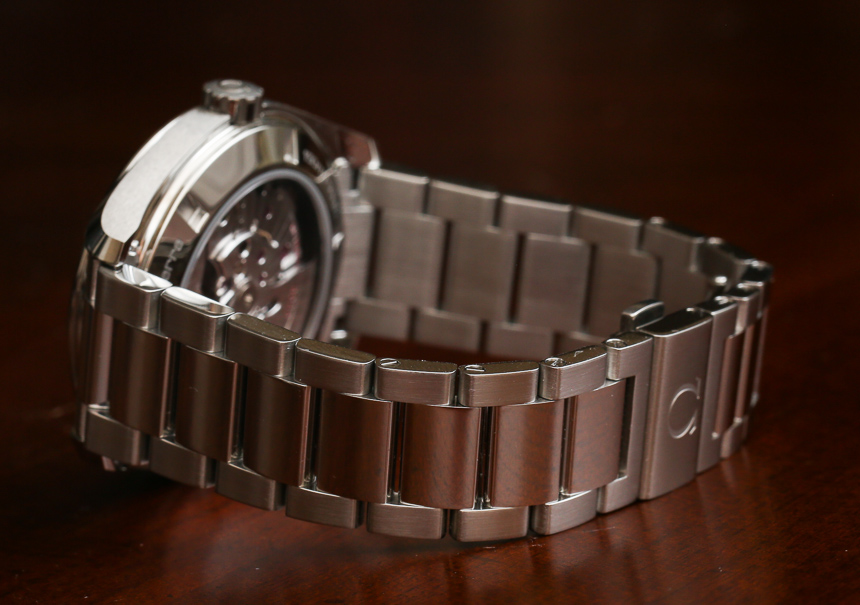 The point is that Omega has created a technology to have a more or less totally anti-magnetic movement without any appreciable sacrifices. We can now have movements that cannot be harmed by virtually all magnetic fields, but that also have the benefit of being non-shielded, viewable, and with a date indicator window.  Of course the 8508 movement also has a Co-Axial escapement, power reserve of 60 hours, and is COSC Chronometer certified.

If you are asking whether or not this is something to really find cool, well it is. Magnetism is an invisible and silent killer of watches, and even if it does not damage your timepiece, chances are that the accuracy of your mechanical watch has been affected by magnetism at least at some point. To make their point the 15,000 Gauss is a dressed-up Omega Seamaster Aqua Terra with a banded black and yellow seconds hand along with a yellow ring of peripheral minute numerals. It also has a healthy amount of “> 15,000 Gauss” branding.

Future anti-magnetic Omega watches will not use the > 15,000 Gauss name. That is special for this debut model, as it is clear many people may not know what it even means. In a sense it is merely a jab at its competitor Rolex whose similar watches name means “1000 Gauss” (Milgauss). While the yellow and black color tone seemed odd at first, on the wrist the watch is very handsome but it does have a sporty twist. If Omega is trying to make a modern day mechanical scientists watch, they have again succeeded. 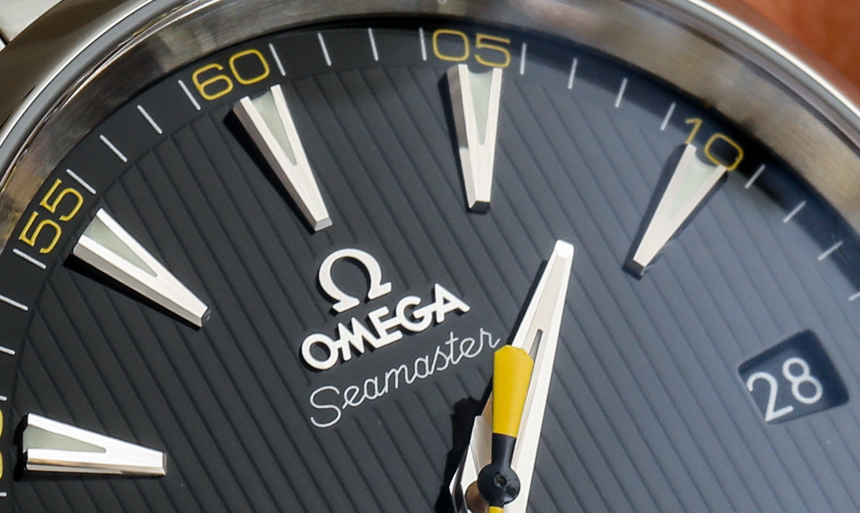 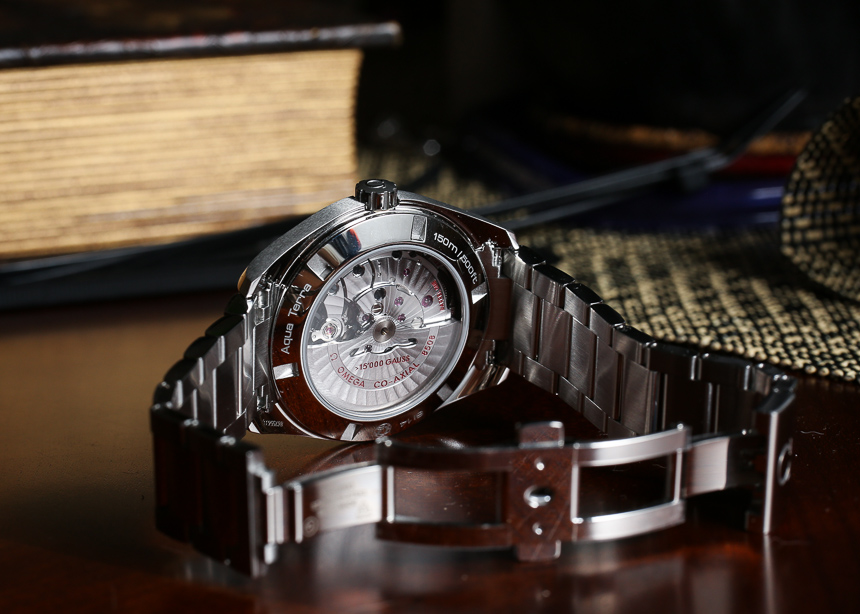 I don’t think that the Omega Seamaster Aqua Terra itself requires a huge discussion here. It is one of Omega’s dressier sport watches but is quite handsome. Sized at 41.5mm in width, it does wear on the larger size due to the wide lug structures. Typical of Seamaster cases, the steel case is a mixture of both polished and brushed surfaces. The black face is textured with vertical lines.

Dial legibility is a key asset of most all Omega Seamaster models, and the Omega Seamaster Aqua Terra range is no exception. It is actually very reminiscent of classic Seamaster models, but in a slightly different way compared to the Planet Ocean collection. Having said that, “Aqua Terra” means “planet ocean,” but in a different language. That is really what this model range is all about, much of the same personality, but in a different language. As the Omega Seamaster Aqua Terra is more dress watch versus sport watch, Omega gives it 150 meters of water resistance (versus 600) and it isn’t a true diver as it doesn’t have a rotating bezel. Having said that, it is very faithful to the original Seamaster models that were meant to be a weekend watch for the country club demographic.

Omega actually offers two versions of the Omega Seamaster Aqua Terra > 15,000 Gauss. The steel on steel bracelet version reviewed here is the ref. 231.10.42.21.01.002, and it is accompanied by the ref. 231.12.42.21.01.001 on a brown leather strap – though, I highly prefer this and most other Omega Seamaster Aqua Terra models on a bracelet. A solid piece with great technology, the real question is whether to get one if what you are after is the anti-magnetic technology. Clearly a desirable feature to have, with Omega slowly deploying what is special about the 8508 movement into other Omega movements soon it can be difficult to know when to act.

Later in 2014, Omega will release a few other models with the anti-magnetic technology found in the 15,000  Gauss in some other new timepieces. Though my feeling is that they are going to be a bit more expensive than the Omega Seamaster Aqua Terra 15,000 Gauss – so that might be one reason to pick this one up. It is also good for those who appreciate a good story and want something that is the first of its kind. It is also a good choice if you just have to have a hint of yellow in your life. Price for the Omega Seamaster Aqua Terra > 15,000 Gauss watch is $6,500 on the leather strap and $6,600 on the steel bracelet. omegawatches.com

Necessary Data
>Brand: Omega
>Model: Seamaster Aqua Terra > 15,000 Gauss
>Price: $6,600 (ref. 231.10.42.21.01.002)
>Size: 41.5mm
>Would reviewer personally wear it: Yes
>Friend we’d recommend it to first: Sharply dressed yet hands-on guy looking for a good-looking timepiece that will survive the rigors of industry.
>Best characteristic of watch: Ability to mix the benefits of a non-anti-magnetic watch with the benefits of a highly anti-magnetic watch is game changing. Cool tech and nice looks.
>Worst characteristic of watch: Bold seconds hand might not appeal to all, great for early adopters but might cause many to hold off since Omega will be deploying this technology more widely soon.