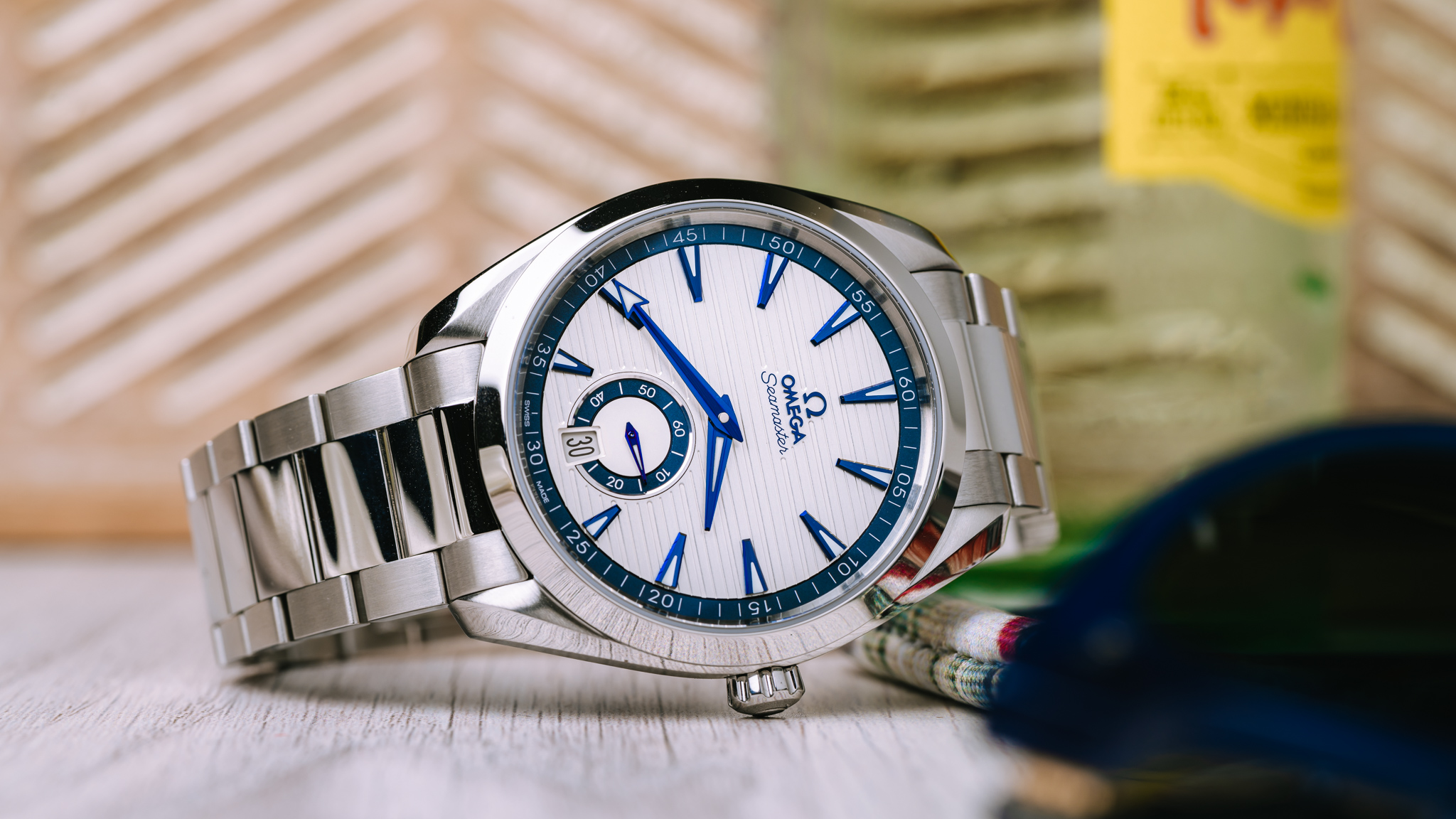 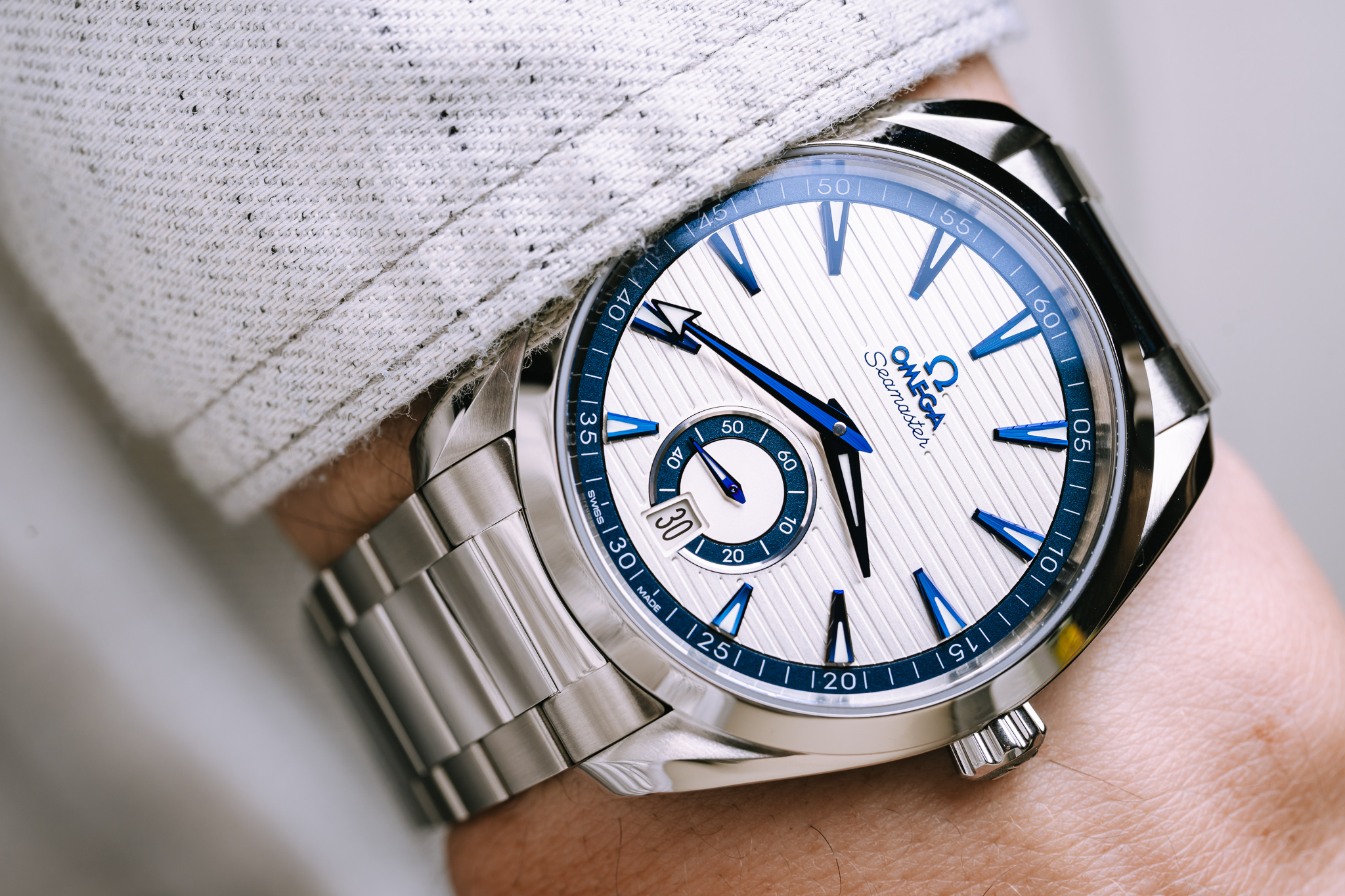 Effervescent. It’s the Omega Seamaster Aqua Terra, in a word. It’s the twist and the crack, the soft hissing of bubbles, and the satisfying clear liquid cascading from a tall frosted bottle into a cold rocks glass. It’s the soft clinking of ice cubes at water’s edge. And with its colorful array of offerings, its bubbly personality, and its sharply rendered dial, it’s also arguably the platonic ideal of the summer watch — one for overnight backpacking trips, beaches & backyard cookouts, but also weddings, client meetings, and date nights. It’s also likely why just a few days shy of summer’s official starting line, Omega is effectively doubling down on its most versatile collection with nearly twenty (!!) new Aqua Terra references equipped with the Bienne maker’s newest Small Seconds Master Chronometer calibre. 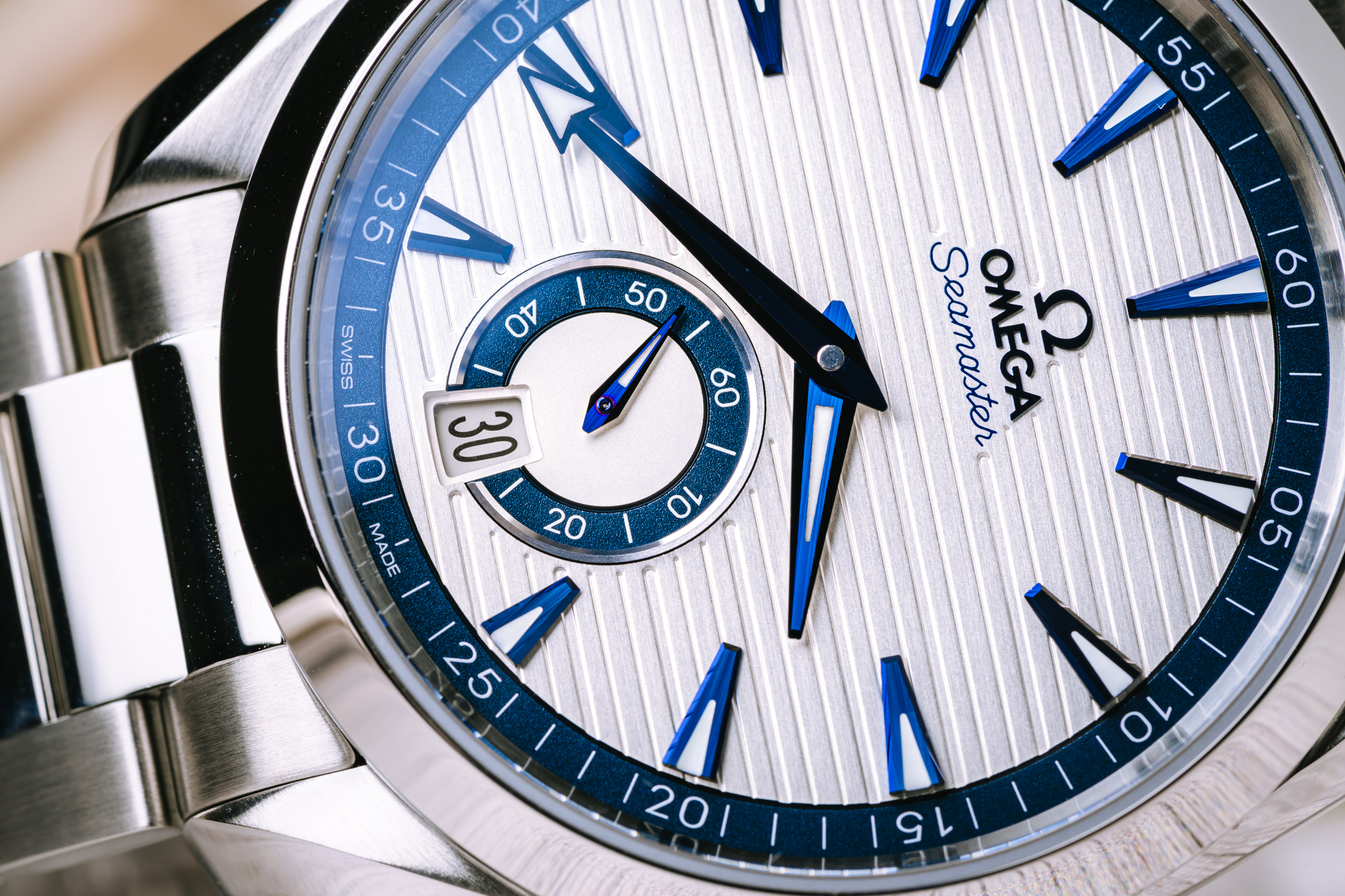 Quite honestly, it’s a huge line extension, and one that I personally don’t fully understand — it feels a bit like the Omega from five or years ago, a brand content with introducing hundreds of skus at a time during its tradeshow cycles, and not the tightly curated brand we’ve come to love all over again as of late. But that’s not to say this isn’t a good watch — far from it. After all, one of Omega’s brand signatures has always been that of choice and diversity, and boy do Aqua Terra fans have plenty to choose from now, between the standard three-hand and the new Small Seconds-equipped references. The new range continues the traditional span of both 41 and 38mm case sizes, in either stainless steel or precious metal, with a few two-toned options mixed in for good measure. as well as two-toned options, each with their own unique dials as well as strap or bracelet options. 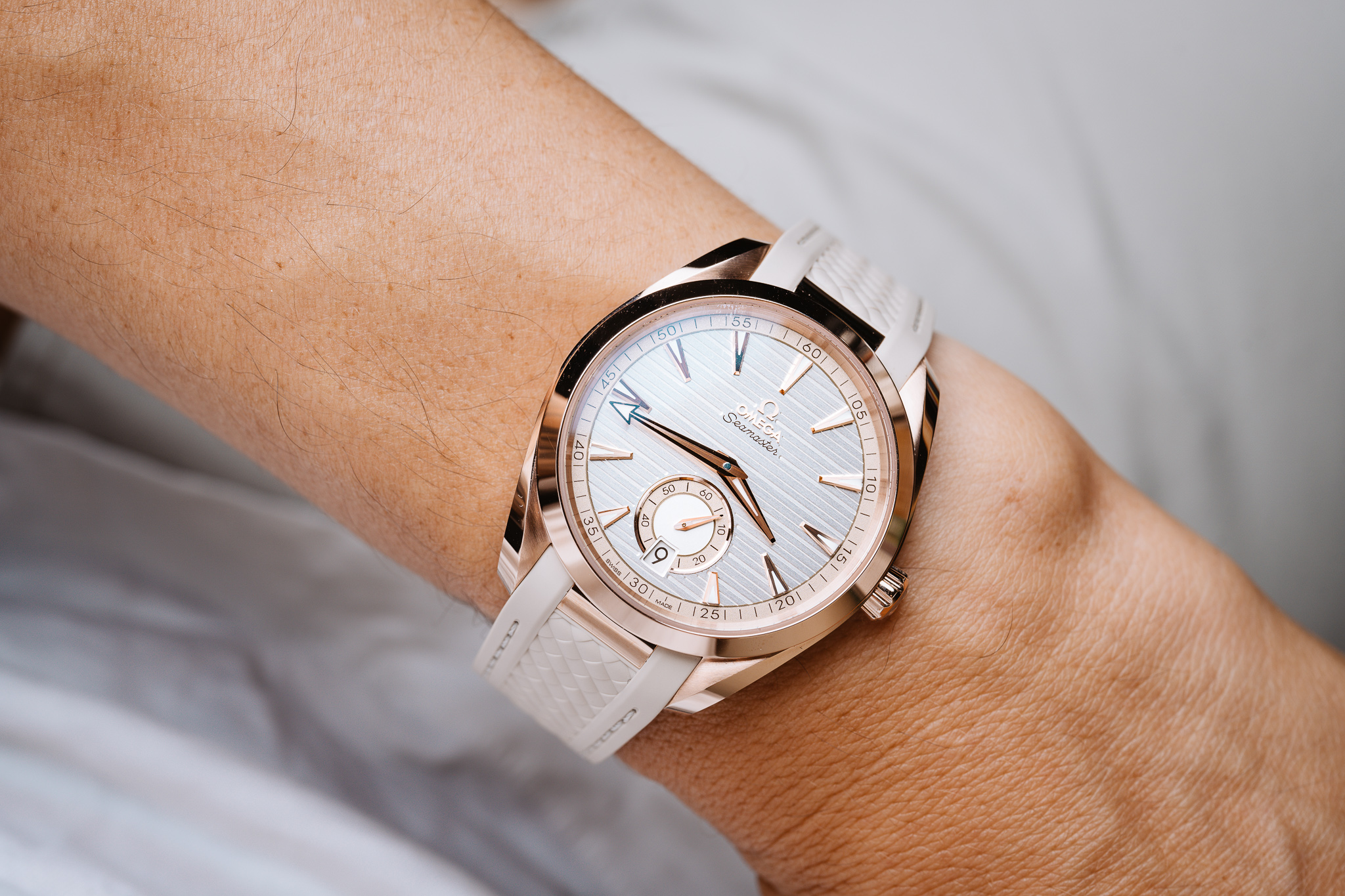 The small second is a simple complication that makes a big visual difference, particularly on more minimalist, Bauhaus-inspired watches (or Omega’s recently announced Tresor Power Reserve watches) which lean on the subsidiary register to break up the dial and provide a little more visual interest. But the existing Aqua Terra doesn’t exactly have this problem, as it already has quite a few visually interesting and distinctive design elements — particularly its slatted “teak deck” concept dial and bold, facetted hour markers. The small seconds definitely adds another layer of texture and complexity to what’s already a quite ‘active’ dial, and it might be a welcome addition for those who appreciate a slightly busier look. New for this reference is of course the independent running seconds hand and subsidiary seconds register at 6:00, which is encircled by a beautifully contrasted ring that matches the textured ring at the periphery of the dial itself. Everything else about the Aqua Terra Small Seconds maintains the baseline established by the standard three-hand references, from the 150 meters of water resistance and the imminently wearable case proportions, to its bubbly personality all make it the polar opposite of its prime competition — whatever the watch world equivalent of tap water might be. Maybe the staid Datejust? Of course the biggest update here is the Master Chronometer-certified Omega cal. 8916, which powers the 41mm stainless steel version. In keeping with the rest of Omega’s 89xx-level movements, this Small Seconds maintains the super-handy ‘Travel Time’ function, which enables quick adjustment of the hour hand from the crown’s first position. The 41mm precious metal versions get cal. 8917, which is virtually identical from a chronometric standpoint, save for a precious metal rotor and balance bridge, to match the gold on the case itself. 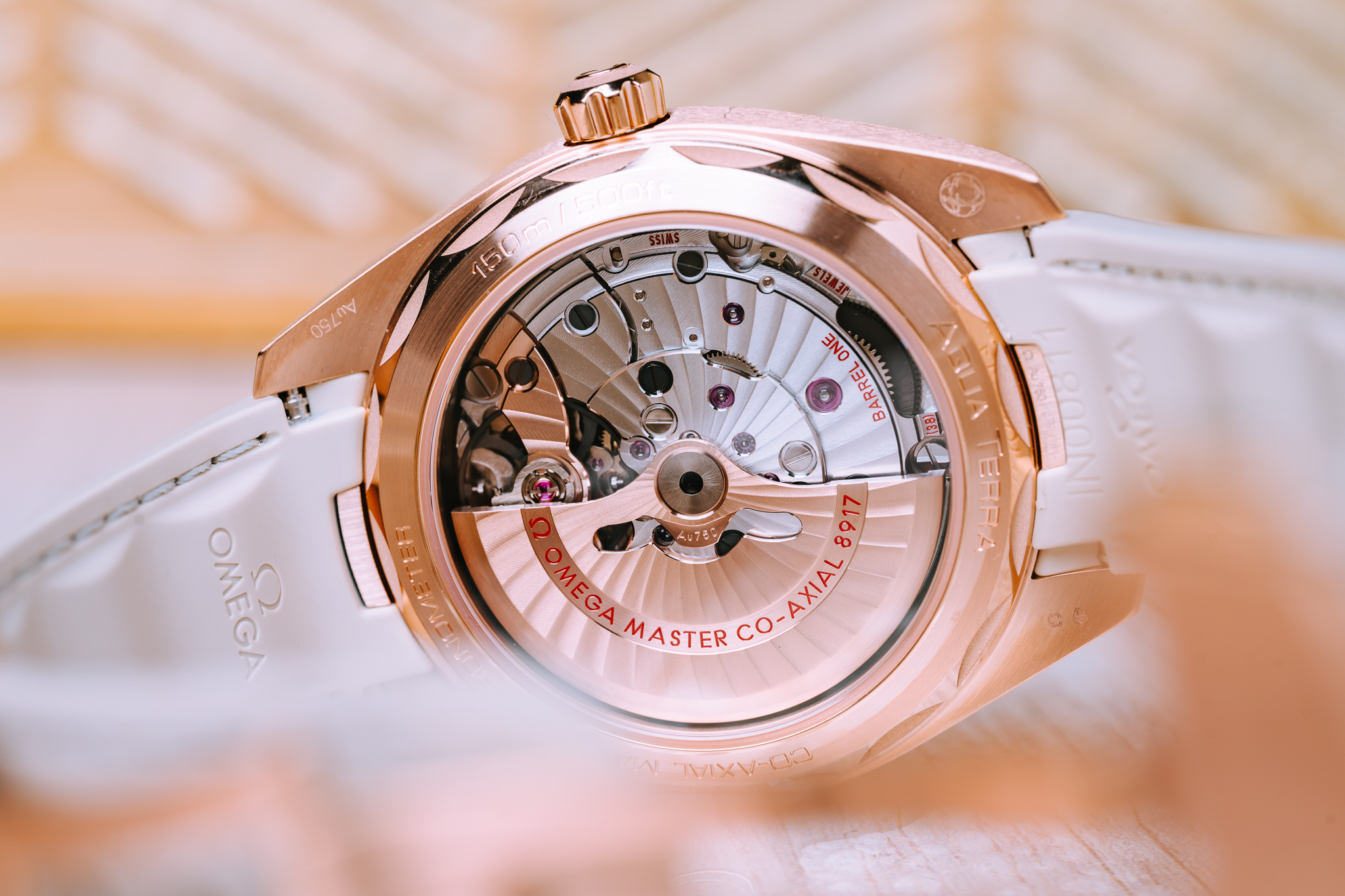 Though certainly capable, and bearing the adventurous ‘Seamaster’ moniker, I wouldn’t say the Aqua Terra is an adventure watch in the traditional sense, unless your idea of adventure is a good novel, a cold mojito, a Panama hat, and an infinity pool overlooking the side of the ocean. That said, it’s not to say the Aqua Terra couldn’t be a good adventure watch – on the contrary, its most sought-after reference (now discontinued) was a proper Bond watch, after all. And after having tried both the 38.5mm case size and the newer 41mm variant (note that the Aqua Terra has been downsized by a half millimeter to 38mm and 41mm, respectively), my preference is with the 41mm – and not just because the larger cases get the more fully-featured 89xx-series movements. I’ve always felt that the Aqua Terra is a watch that needs the extra dial aperture to let all the detail fully breathe, and given its already short lug-to-lug measurements on the latest revision, it strikes a modern, sporty silhouette, albeit one that’s comfortable and unobtrusive in all the right ways. 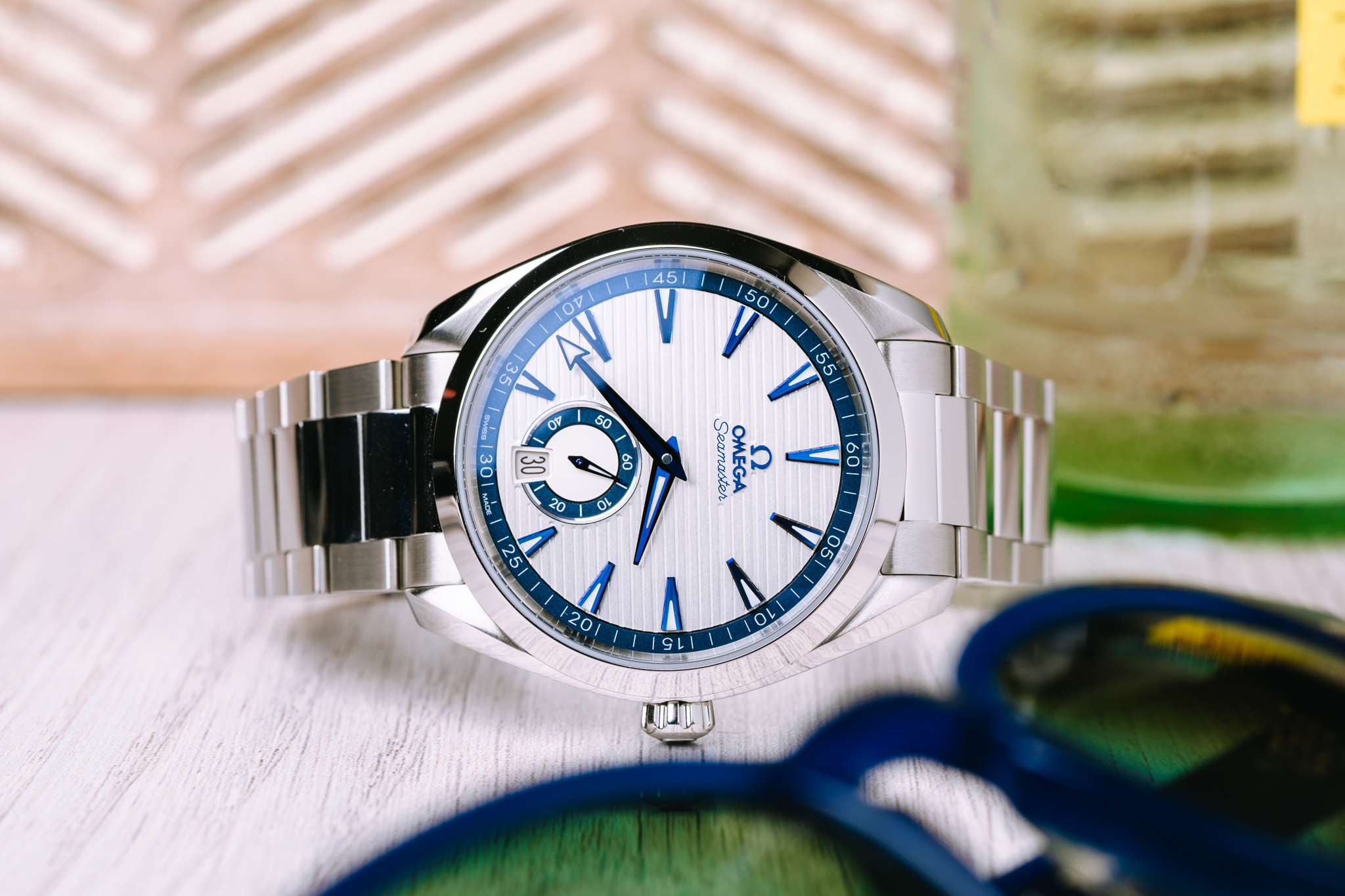 While there’s no formal confirmation on a price increase at Omega (something that’s more or less a mid-summer tradition for many key Swiss brands), the price for the stainless steel 41mm Seamaster Aqua Terra Small Second (ref. 220.10.41.21.02.004 as pictured) is $6,300 USD, a roughly 10% increase over the standard 3-hand variant. Variants on the rubber strap in stainless steel start at $6,050 USD. You can learn more about the full Seamaster Aqua Terra collection at the Omega website right here.