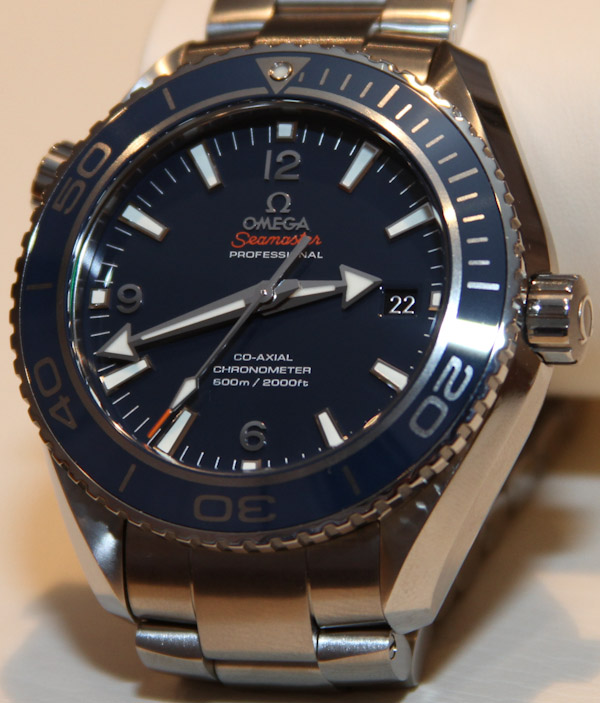 In addition to the new for 2011 Speedmaster Co-Axial Chronograph Automatic watch, Omega offers a new  Planet Ocean Seamaster Co-Axial Chronograph Automatic watch with the new in-house Omega caliber 9300. There is also a three-hand Seamaster which also has in-house made Omega caliber 8500 automatic. These new pieces are fantastic, and show just how dedicated Omega is to making its two core sport watch collections better and better.

One quick note for you watch movements nerds. The original caliber 8500 for a few years ago did not have a silicon hairspring, but all the new versions do. What you see here the range of new pieces for 2011. I want to start with the more simple three-hand Seamaster Co-Axial Automatic. There will be black and blue version. The blue will have Omega’s Liquidmetal bezel, but not the black one yet. Last year Omega came out with a limited edition Omega Planet Ocean Seamaster with a Liquidmetal bezel, this was to test the new ceramic/metal bezel. Since then Omega has acquired the rights to Liquidmetal 100%. This means they plan on going full scale with Liquidmetal soon, but right now they are still ramping up their ability to industrialize its use. Though, I will say that the blue Liquidmetal bezel watches are not limited in production. 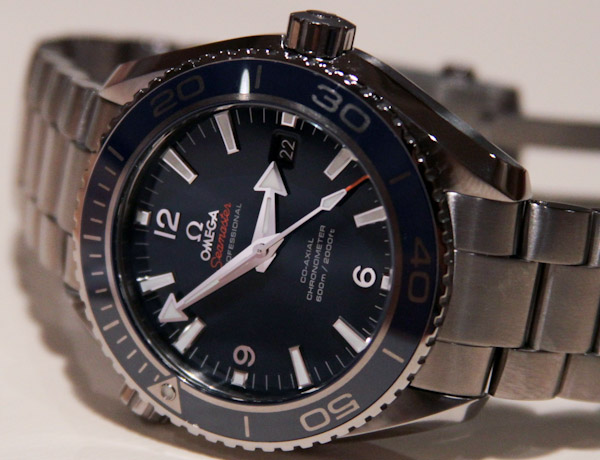 At 45.50mm wide the Seamaster Planet Ocean Co-Axial Chronograph Automatics are large but good-looking (the three-handers are the same size). The case size is really perfect on the wrist due to shorter lugs, and the Caliber 9300 movement is a great addition. I discussed it a bit more here when debuting the new Omega Speedmaster Co-Axial Chronograph Automatic. The same movement fits and works the same way in Seamaster, but the hands have been adapted for dive watch use. The blue version with Liquidmetal is in titanium, which the black version is in steel. Omega ups their titanium quality to grade 5 – whereas they used grade 2 for some of their previous titanium watches. The polish is great, and the titanium looks light steel in person of finishing, save for that it is lighter and a bit more gray in tone. Oh, and the lume of the dial is fantastic. All blue SuperLumiNova, but the minute hand is in green for easier sight underwater and the dark when seeing the different between the hour and minute hand. 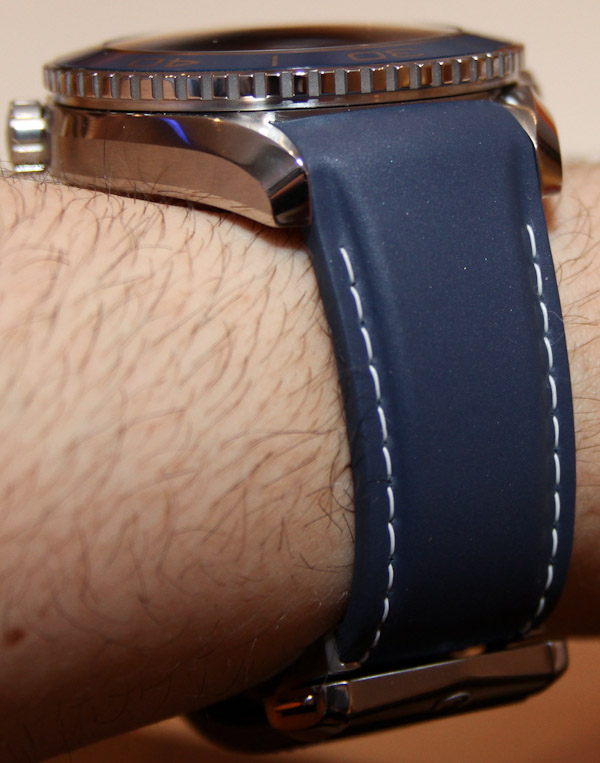 More so than ever the Seamaster Planet Ocean feels like a high-end watch. Detailing is superb and everything seems to work as promised. I love how nicely the bracelet wraps around your wrist and the dial elements are crisp. Both the chronograph and three-hand models are water resistant to 600 meters, and have well-done AR coated sapphire crystals. They also have sapphire exhibition casebacks. 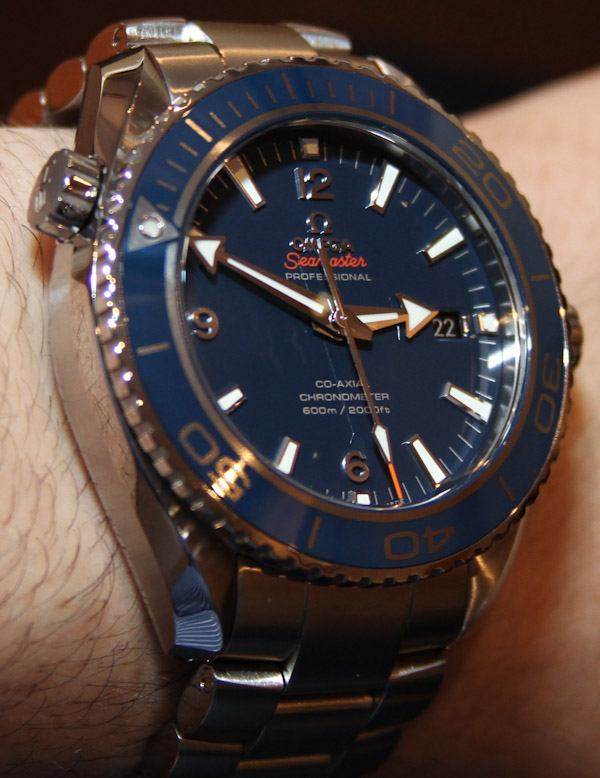 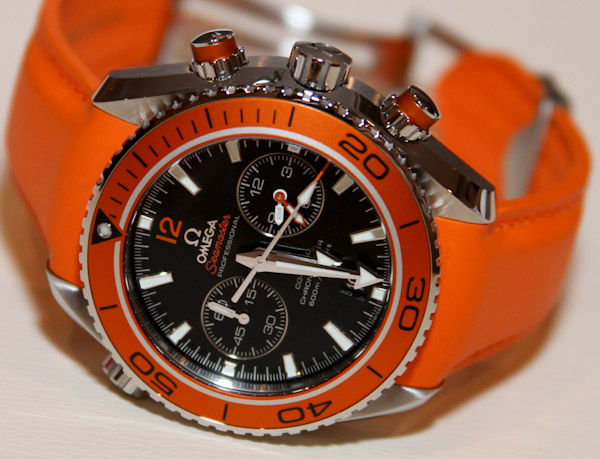 While the chronograph is a cool range, my pick is the three-hander. Not that there is anything wrong with the chronograph, but I like the Speedmaster more for a chronograph model. For me a true diver is all about clarity and three hands. The Seamaster Planet Ocean with the caliber 8500 is just that. A great in-house automatic movement, super refined case and dial, and a nice large size. In titanium it is light and just a dream. While I typically choose black, the blue version is really well-done as well.

New for 2011 is a rubber strap that is incredible. It looks like leather, but is rubber with an almost sparkly finish. The tactile experience is impressive, and wearing it is exactly what you want when using a rubber strap. This is one of the best out there and Omega does a great job integrating it with the case. I also love the new deployment clasp that hides the excess strap on the wrist side. 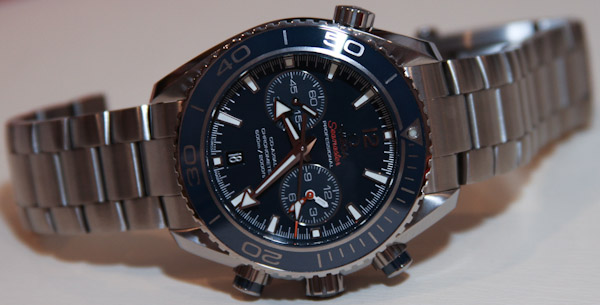 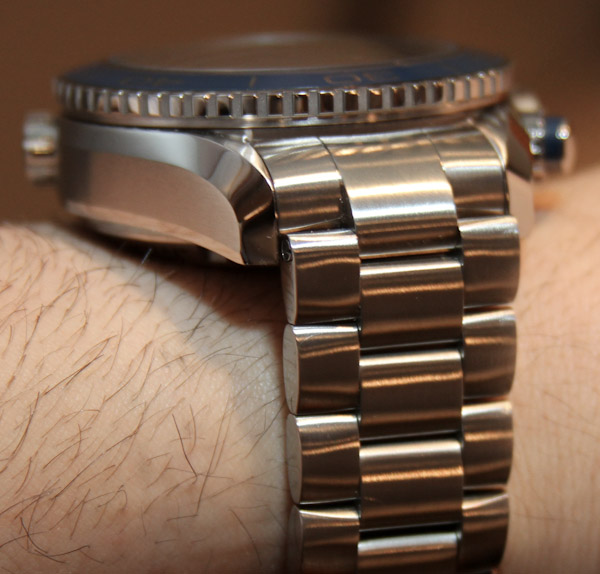 Not sure on pricing yet, but they will all be under $10,000 of course. The Speedmaster with the 9300 was about 7,300 Swiss Francs, so you can expect the Seamaster chrono to be a bit more, and the three-hander to be a bit less. Everyone is eager to have all Liquidmetal dials. It will be a bit before Omega offers the full range with the great bezels, but they promise it is coming soon. With desirable movements and the high-performance features you expect from a Seamaster Planet Ocean, these new large watches do the collection proud and will find a happy place in most anyone’s collection. Shall I not forget! There are also 42mm wide Seamaster Planet Ocean with the 8500 automatic movement, and 37.50mm wide version for the ladies with the older Omega Co-Axial 8250 or 8251 movements.