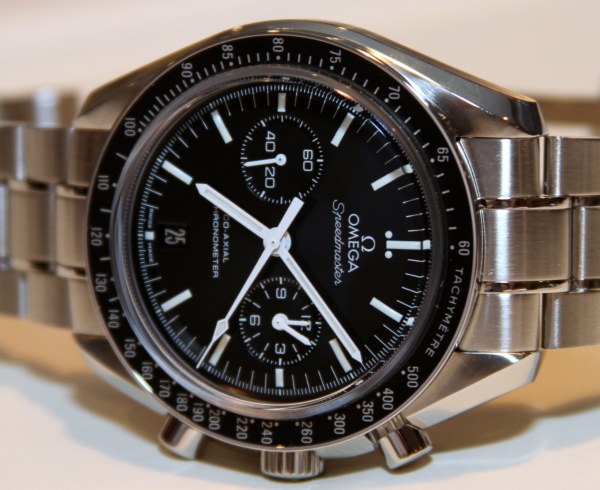 Wow, this is the Omega Speedmaster watch that I want… really want. For 2011 Omega has created the perfect Speedmaster for me. Did they have me in mind when making it? Not likely, but let me tell you what I personally like about it and why I think this is one of the most compelling new Omega sport watches to be released in a while. In short, you get size, function, and a great movement.

The Speedmaster range from Omega requires no introduction. If it does, how exactly did you manage to find this website? Starting with popularity gained from being the “Moon Watch,” the Omega Speedmaster Professional has remained a mainstay of classic mechanical sport watches. While Omega still produces the original Moon Watch version, there have been dozens of variants of the Speedmaster over the years. Each shares the same basic look and chronograph functions – offering an entire family of options for those interested in the piece.

While the Moon Watch has a great history to it, I failed to have a great desire to own one for a few simple reasons. For my tastes the original is a bit small, I prefer automatic movements, and I want something with a sapphire crystal. I will probably end up owning a Moon Watch someday, but for now I know what type of Speedmaster I would want – and here it is. 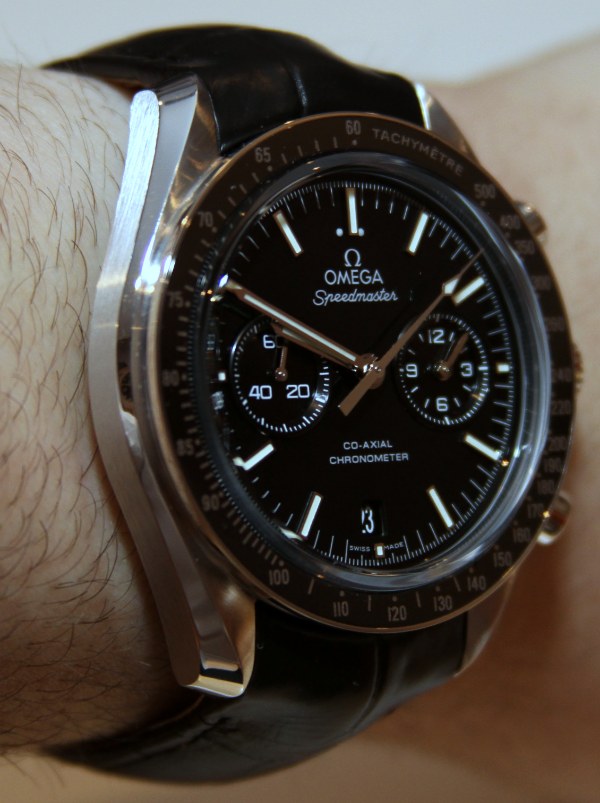 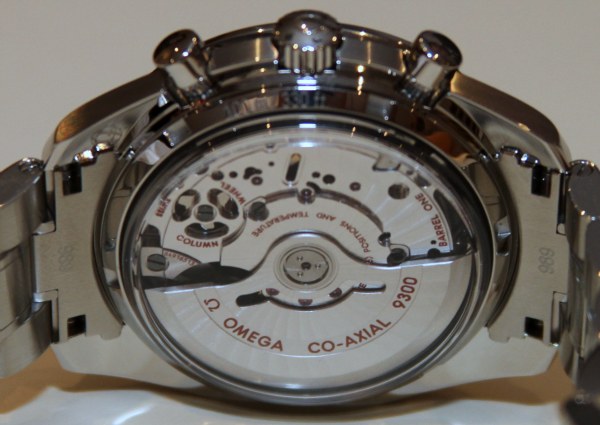 For 2011 Omega offers a brand new version of the Speedmaster with their brand new in-house made caliber 9300 (and 9301) Co-Axial chronograph automatic movement. The watch has been bumped up to 44.25mm wide and comes initially in steel, platinum, and orange gold. The steel versions are going to be the big sellers, with a price of about 7,300 Swiss Francs. The platinum version has a slightly different dial, and is seen in this article on the alligator strap. It also retails for about $35,000. The case and hands are platinum, while the dial is actually black enamel.

Aside from the new dial layout and an upgrades bracelet, this is the Speedmaster people know and love. The dimensions of the case have been enlarged to fit the movement as well, but the profile of the watch proportionally remains the same. As for the upgraded bracelet, there is a new system that allows you to adjust the size a bit more easily when adding or removing links. 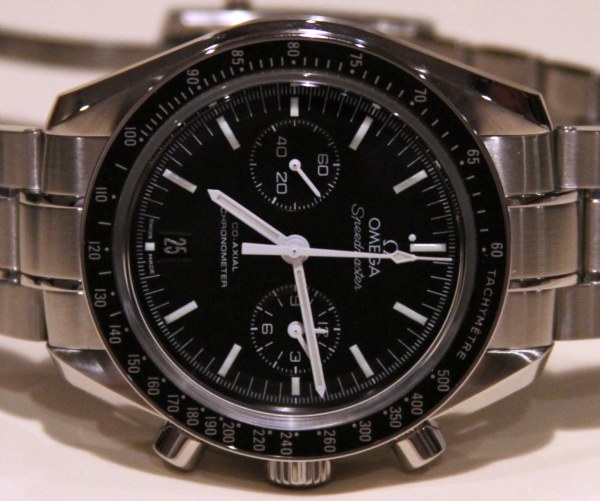 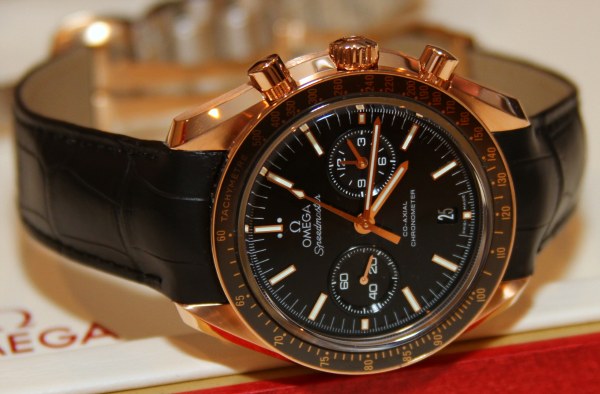 OK, so on to the movement. I am gonna get a bit technical, but not too technical. There are two reasons to build your own chronograph movement. First is to simply say that you have your own movement, and aside from looks and prestige it isn’t really better than other movements from a performance standpoint. Second, is because you want a special movement that no one else has, that offers special features and functions. I am pleased to say that the caliber 9300 Co-Axial chronograph is a movement with a laundry list of features that you don’t expect, but are really happy to have.

Omega has been building in-house movements for a few years now, starting with a simple automatic. The 9300 furthers their goal of having more and more in-house movements, and also moving to having a fully mechanical watch collection (no quartz movements). The large diameter movement fills the caseback of the Speedmaster. It actually has a cap style sapphire crystal (that is AR coated to help with viewing pleasure) over the movement to help keep the case thinner. The movement is thick because of the various complex chronograph features. As an automatic it has a large rotor, and some fantastic diamond polishing that gives it a very high-end feel. The similar caliber 9301 movement only varies in that it has a gold bridge over the escapement and a solid gold rotor. 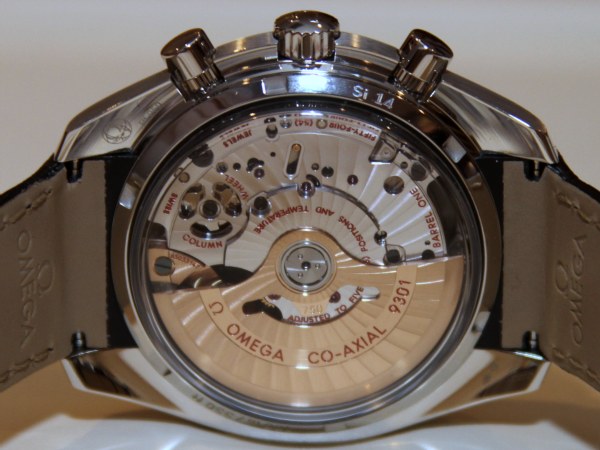 The chronograph part of the integrated movement has a column wheel transfer and a vertical clutch. Really impressed by that… The column wheel isn’t just any column wheel, but one that Omega developed specially for the movement and doesn’t look like traditional ones – though it offers the same type of durability for the chrono. The vertical clutch does make the movement thicker, but also provides for a smoother chronograph operating experience. Really all about precision and durability in the movement. The movement also features a silicon (silicium) hair spring in the escapement. Silicon is anti-magnetic and should last much longer than metal. It is also frictionless and helps the movement be more accurate. And of course, the 9300 has a Co-Axial escapement as well for a more efficient transfer of power that leads to better accuracy. With about 60 hours of power reserve, Omega has the 9300 in the Speedmaster Co-Axial Chronograph COSC Chronometer certified as well. These are all very nice features and I think enough to make people admire and lust after this new movement. 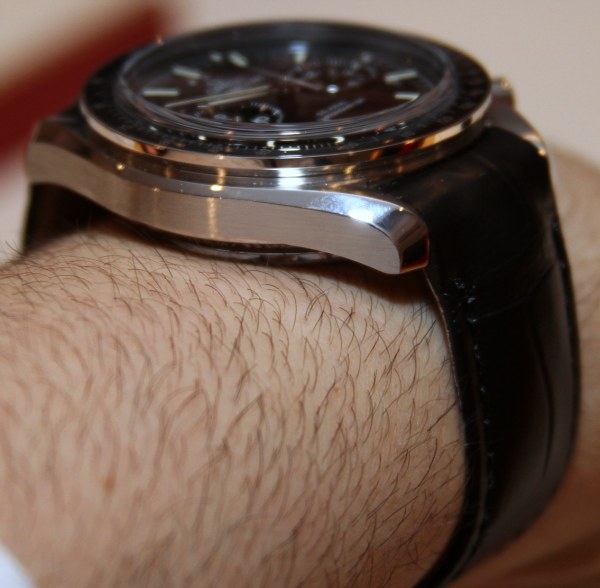 Tech nerdiness aside, the 9300 has some great features. The 12 hour chronograph is laid-out into just two subdials. This is because the right chronograph subdial has two hands in it and is used for the chronograph minutes and hours. I love movement that do this. Brands from IWC to Patek Philippe utilize the double dial chronograph principle, and I think it works for the Omega Speedmaster dial as well. The 9300 also offers an easy-set hour hand for traveling. You can move just the hour hand back and forth when changing timezones to keep the minutes accurate. The movement also has the date. While Omega hasn’t invented anything new with the 9300, the features it has are highly satisfying, useful, and a good thing to have in a watch at a Speedmaster price point.

I am not sure exact price or when this larger Speedmaster with the 9300 movement will be available, but it should be in the next few months and at a premium over the current models. Plus, for 2011 also offers the Caliber 9300 movement in a few Seamaster models that I can discuss another time.