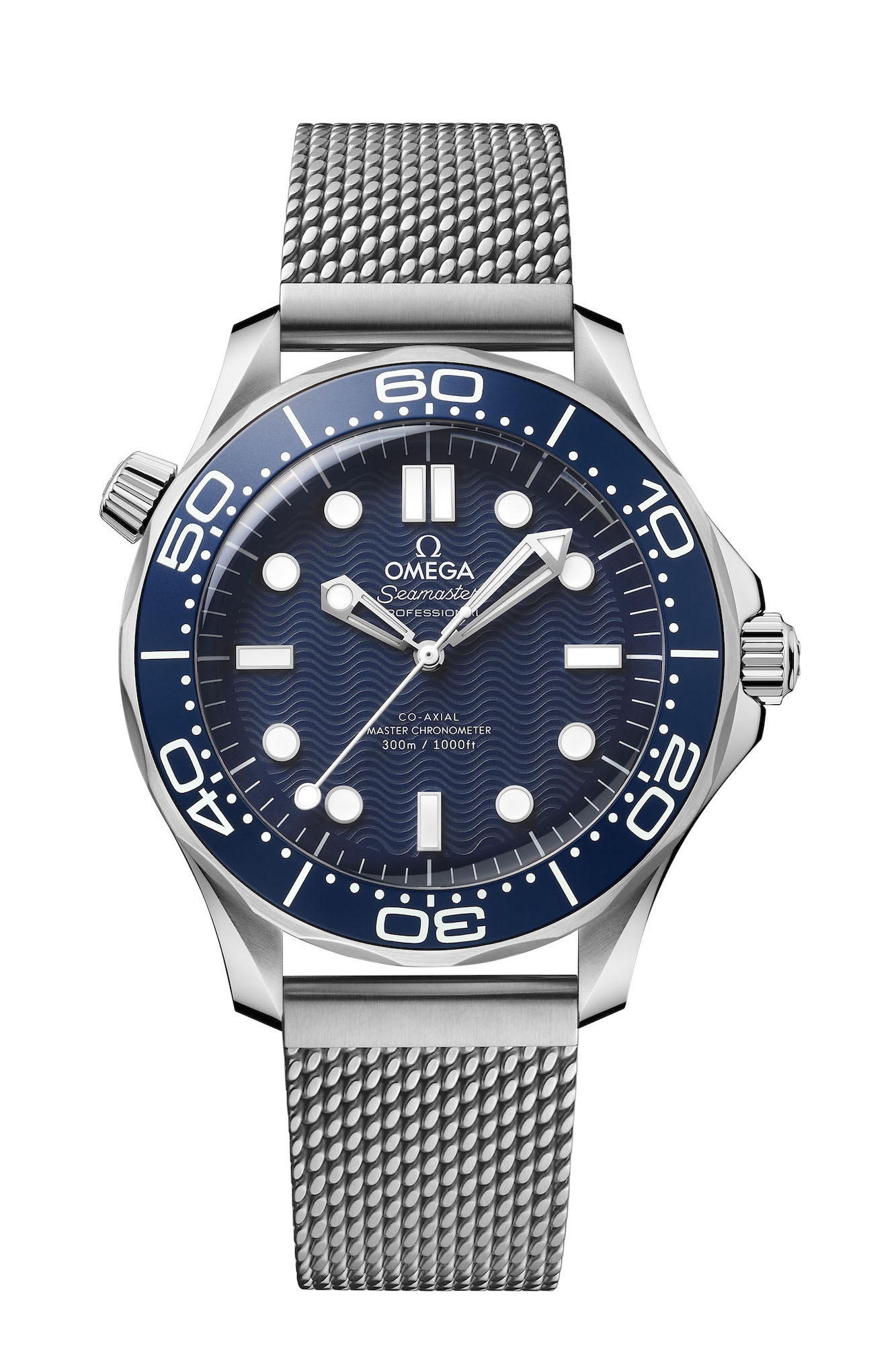 Aside from the various superheroes and cartoon characters of the world, it’s hard to think of a fictional character that has successfully endured throughout the generations and with more mainstream popularity than James Bond. Originally created by author Ian Fleming in 1953, the fictional super-spy made his on-screen debut on October 5th, 1962 — and to celebrate the 60th anniversary of the 007 film franchise, Omega has released a duo of Seamaster Diver 300M 60 Years Of James Bond watches that offer two very different takes on the original Omega timepiece chosen for Agent 007. 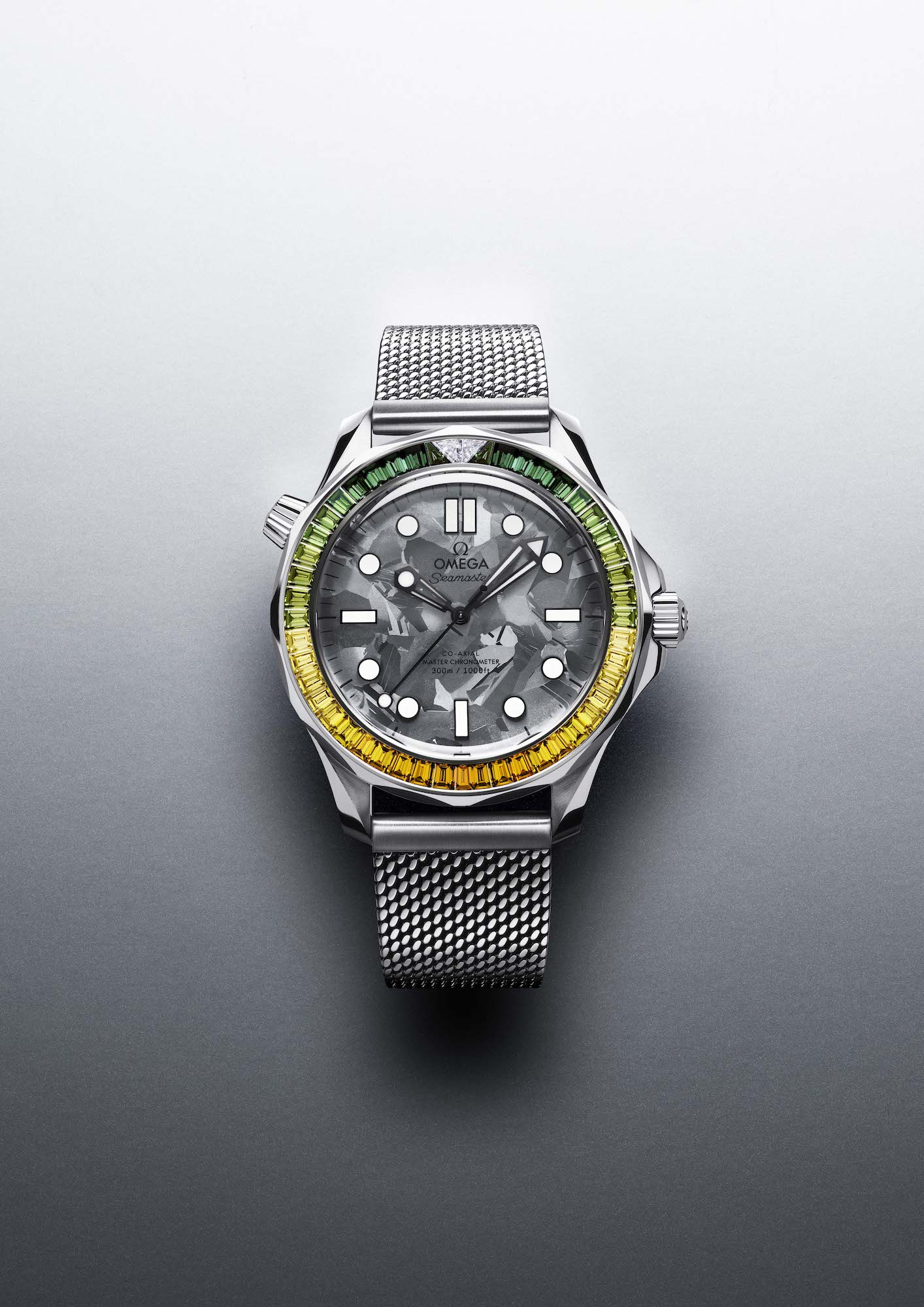 Throughout the years, James Bond has worn a wide variety of different watches in the films, often equipped with gadgets such as lasers and grappling hooks. However, ever since 1995, it has been some type of Omega that has been on James Bond’s wrist. As the story goes, it was Oscar-winning costume designer Lindy Hemming who originally suggested that Agent 007 wear an Omega Seamaster for the brand’s debut on-screen appearance in GoldenEye (1995). From then on, James Bond exclusively wore some type of Seamaster Diver 300M in every subsequent film right up until Casino Royale (2006), in which he also wore a model from the Planet Ocean collection. During the Daniel Craig era of Bond films, a wide variety of different timepieces form the greater Seamaster collection have appeared on Agent 007’s wrist. However, the original Omega James Bond watch will always be the classic blue “wave dial” Seamaster Diver 300M that was a staple on his wrist during every single one of the Pierce Brosnan films of the 1990s and early 2000s. 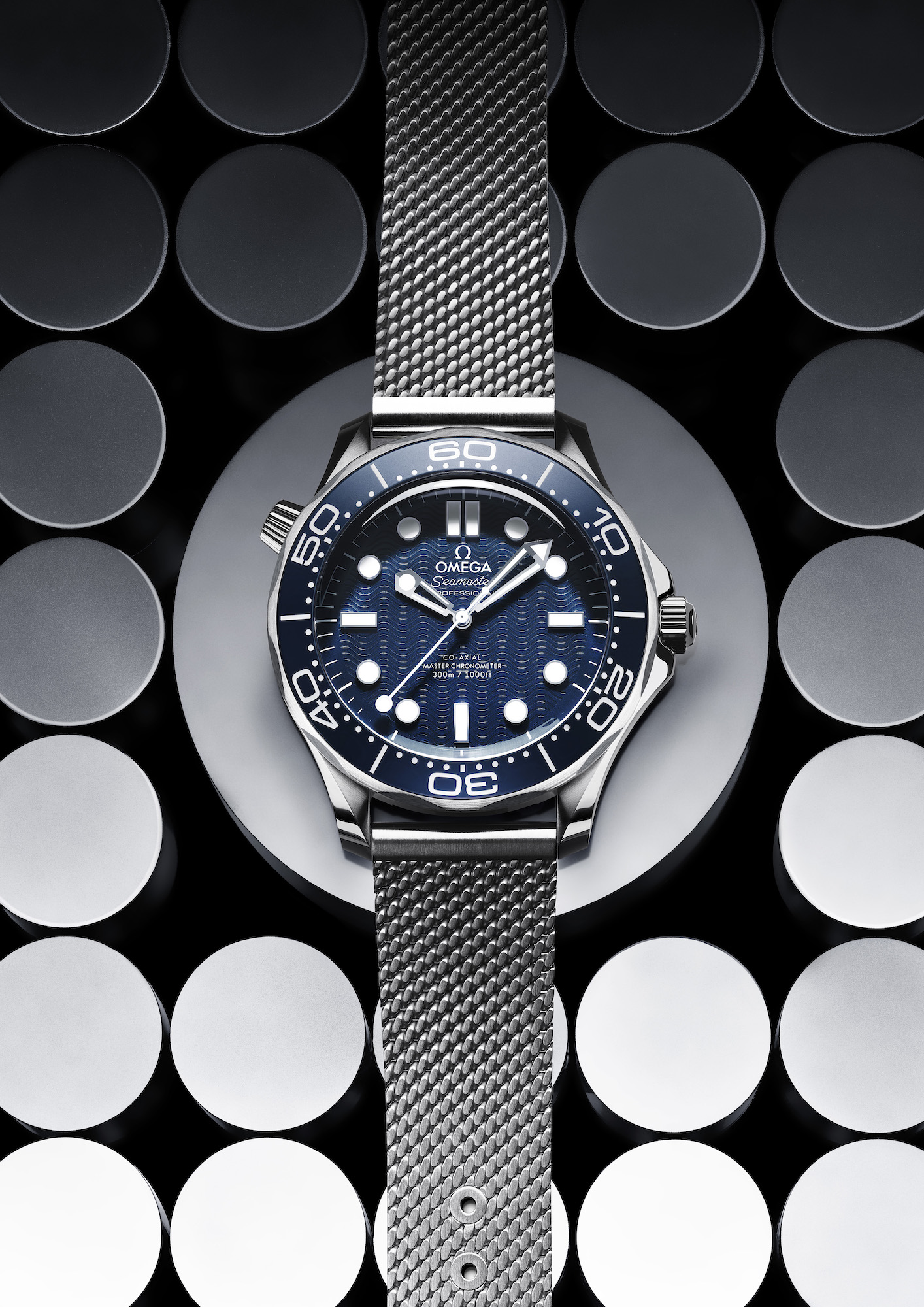 The first of the two models is a stainless steel version that could best be described as a blend between the original Omega Seamaster Diver 300M that appeared in GoldenEye and the latest edition from No Time To Die. Measuring 42mm-wide and fitted with a blue aluminum wave dial and a matching blue aluminum bezel insert, the overall appearance of the watch is undeniably reminiscent of the original model chosen for Bond during the 1990s. With that in mind, similar to the titanium version featured in No Time To Die, the new stainless steel 60th anniversary model features a no-date layout with a conical helium escape valve and a mesh bracelet. Additionally, as a nod to the 60th anniversary of the film franchise, the bezel insert receives a “60” in place of the normal triangle. The engraved markings are all filled with white Super-LumiNova, with the 60 marker glowing green to match the minute hand, while the rest of the hands and hour markers glow blue for added contrast in the dark. 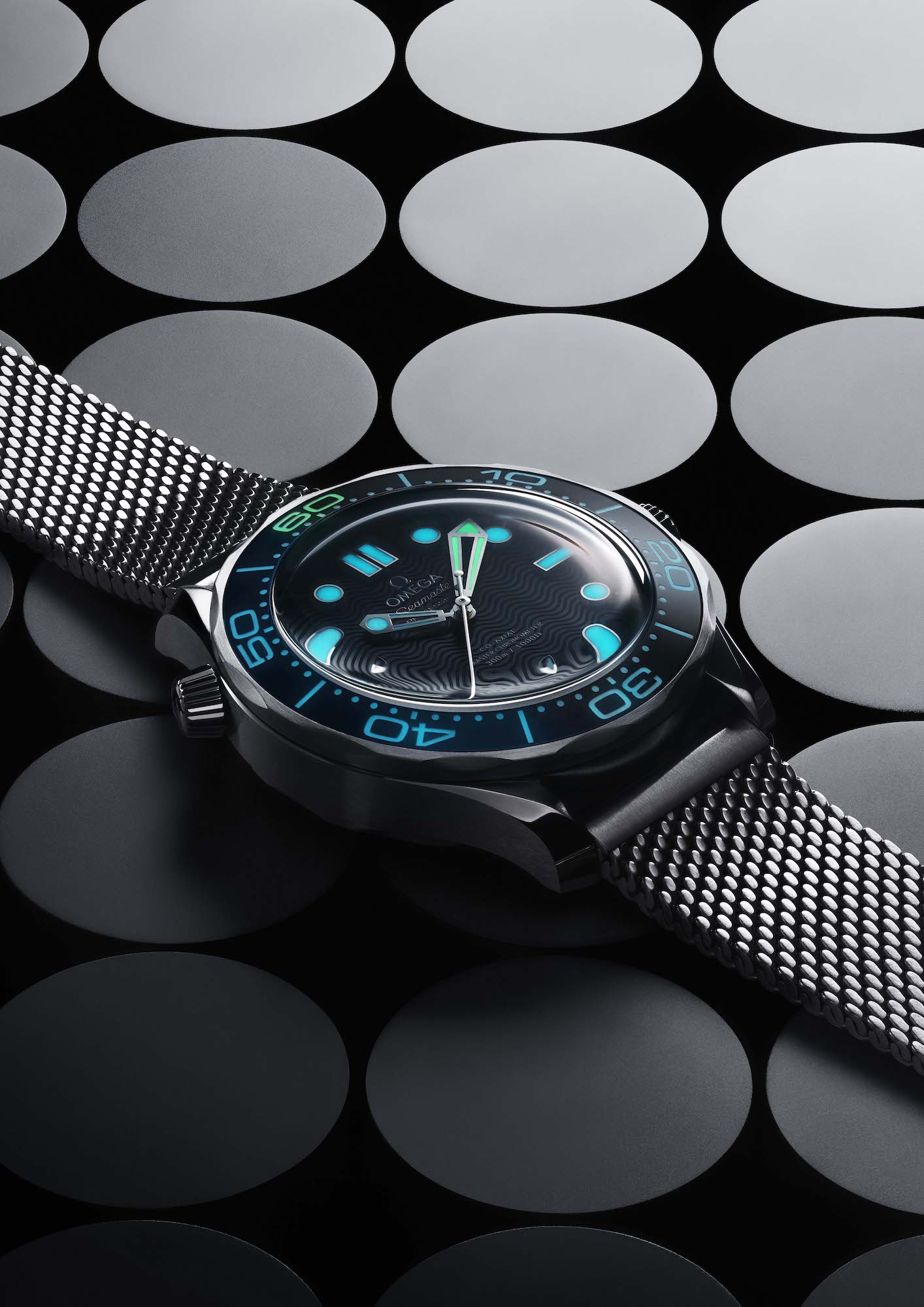 While Omega still offers standard-production Seamaster Diver 300M watches that feature dials with this signature “wave” pattern, the new style of wave dial features a ceramic surface, and the laser-engraved pattern creates a much more modern and impactful appearance. The use of aluminum for the dial of the new Omega Seamaster Diver 300M 60 Years Of James Bond edition gives it an appearance that is significantly more in-line with what you get with the original version from the mid-1990s. The obligatory wave pattern is much more subtle in images than the deep, crisp lines that define the modern ceramic versions. That said, the applied hour markers offer a noticeably more modern overall appearance compared to the printed luminous indices that appear on the original blue wave dial Seamaster Diver 300M watches. Likewise, the seconds hand has been updated to a lollipop style to further set it apart from its 1990s counterparts. 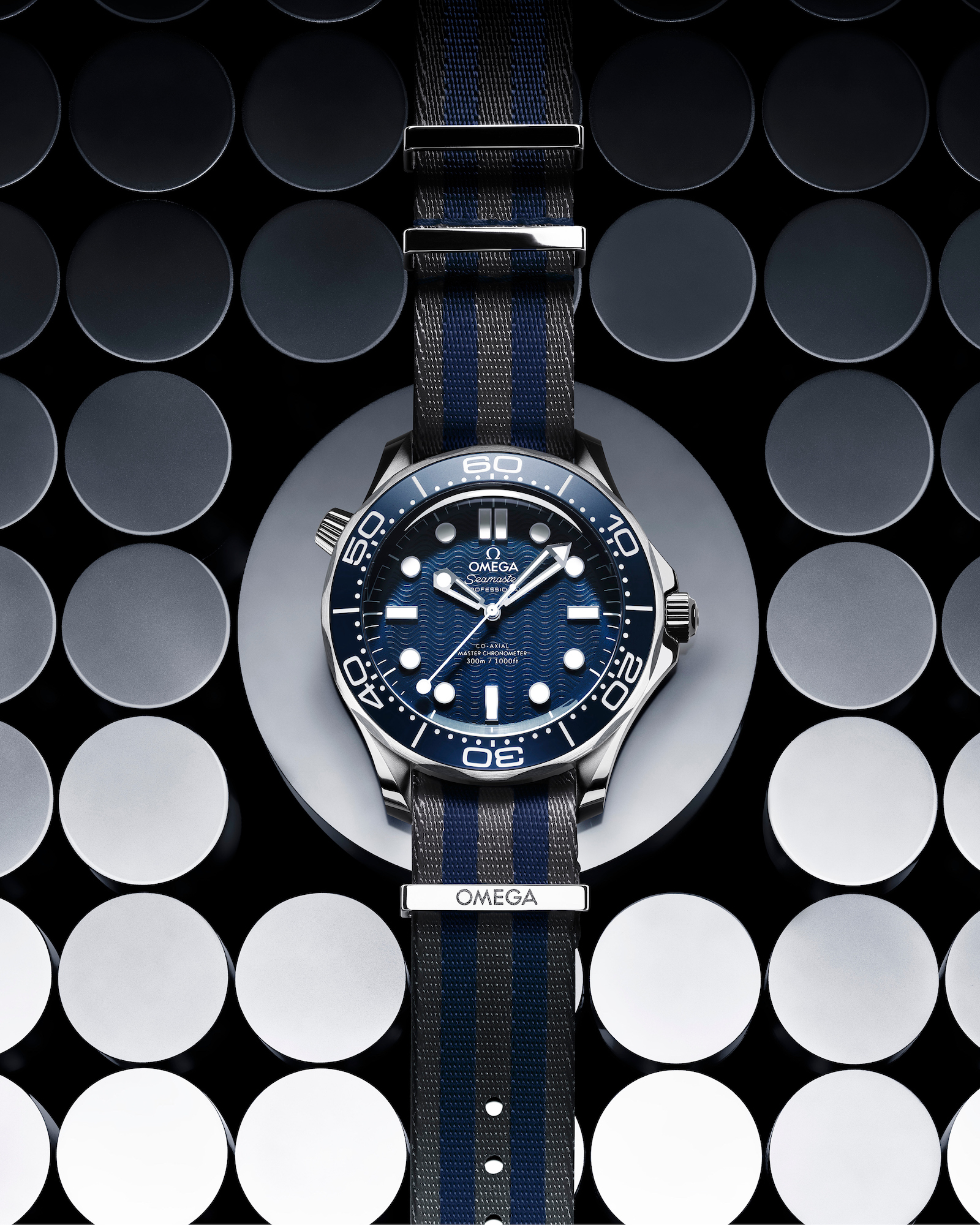 Flipping the watch over, you are treated to the real party piece of this commemorative-edition James Bond model. The caseback features an animation that continuously plays out below the sapphire display window, which depicts the famous 007 opening sequence that features James Bond in silhouette and a spinning gun barrel design. Achieved with a patent-pending “moiré” effect technique, the mechanical animation is linked to the central seconds hand, so rather than being something that needs to be activated, the scene will continuously play as long as the watch is running. Despite its unique animation, the movement powering the watch is listed as being the same Co-Axial Master Chronometer Caliber 8806 that can be found in the titanium No Time To Die model, meaning that the core performance of the movement should be the same. It will therefore run at a frequency of 25,200vph (3.5 Hz) with a power reserve of approximately 55 hours. The display-style caseback is attached by seven small screws, and since this is still a model from the highly-capable Seamaster Diver 300M series, the caseback and screw-down crown work together to provide users with the collection’s standard 300 meters of water resistance. 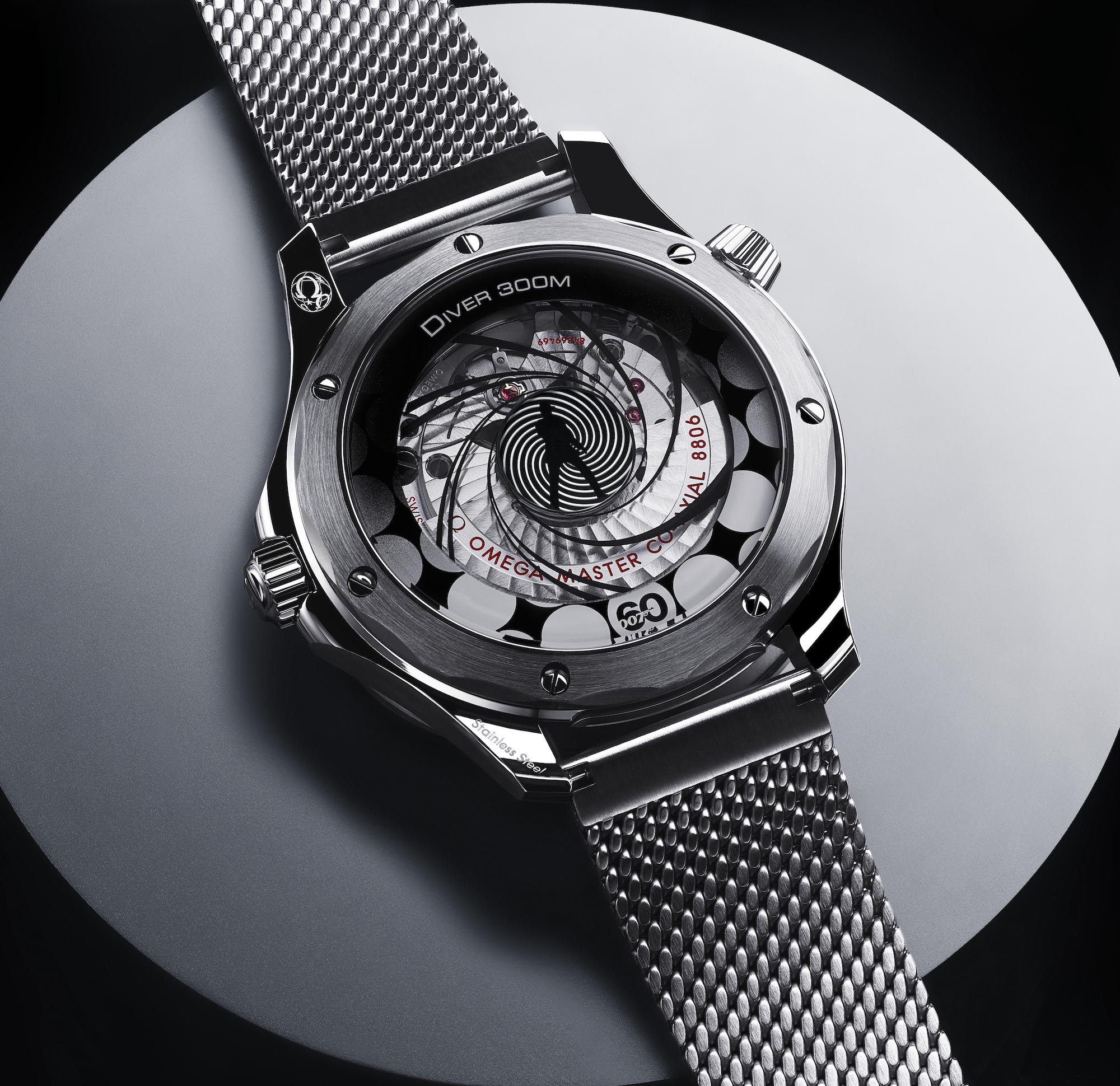 While the stainless steel model is crafted from the most humble of metals and offers an overall design that is largely inspired by the watches worn by James Bond in the films, the second Omega Seamaster Diver 300M 60 Years Of James Bond model takes things in the complete opposite direction. This is an unapologetically luxurious offering that embraces a design inspired by James Bond creator Ian Fleming’s Jamaican home. While the 42mm case and mesh bracelet offer the same core design as what can be found on the stainless steel version, they appear in Omega’s proprietary 18k Canopus Gold alloy. This alloy originally debuted on the Speedmaster collection and has been specifically engineered to have a bright white shine that is resistant to discoloration. While both models offer a white-metal finish, the dial and bezel fitted to the Canopus Gold edition offer a significantly different overall appearance. 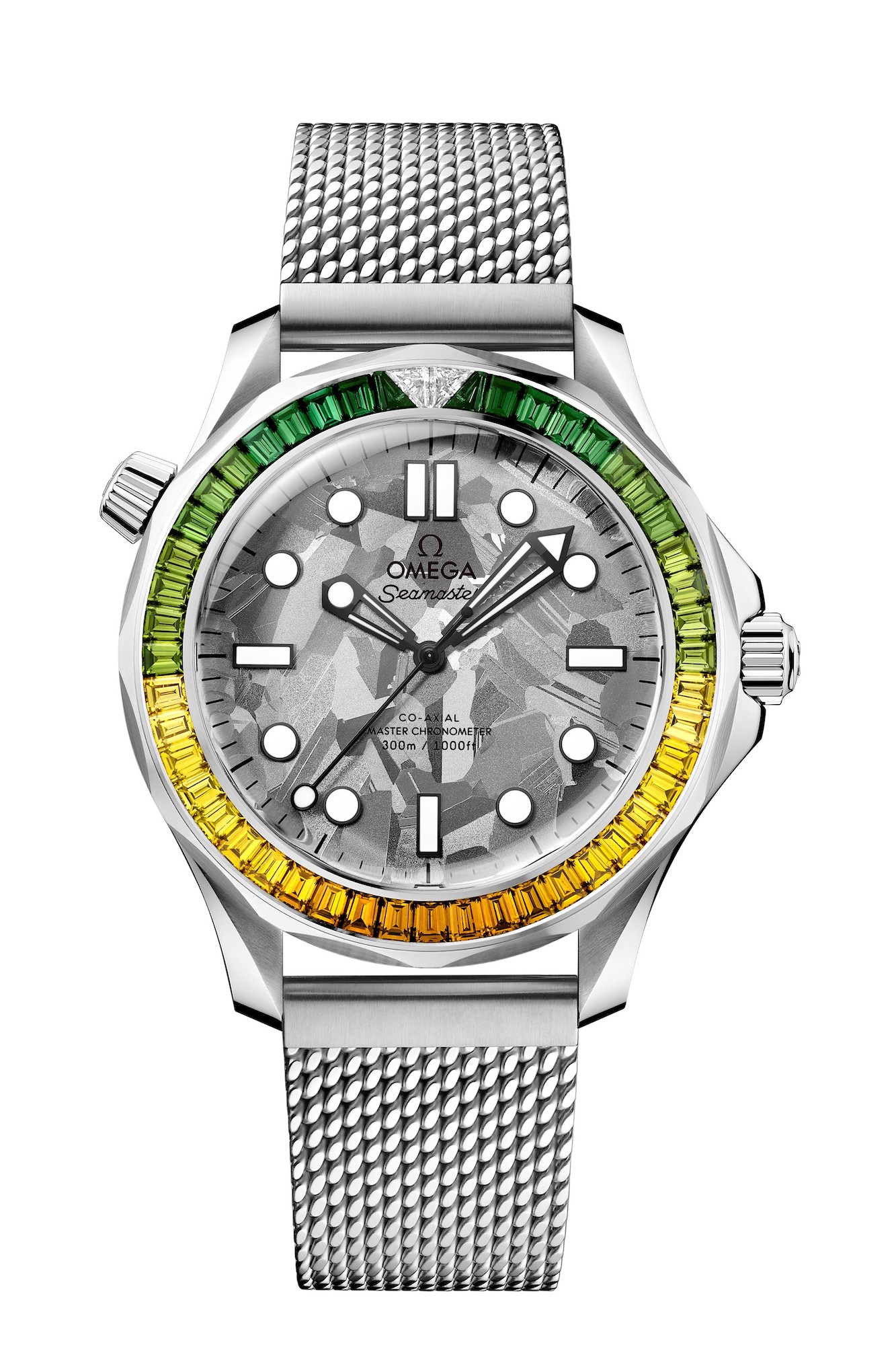 The dial is crafted from natural gray silicon, which is said to be done as a nod to the sands that surround Ian Fleming’s home in Jamaica. Since I personally don’t necessarily see the aesthetic parallels, I can only assume that the reference exists on a material level, as silicon can also serve as the basis for a significant percentage of what makes up sand. That being said, I think the dial itself looks quite good, with an overall appearance that appears to be somewhat of a mix between forged carbon and meteorite. Additionally, due to the crystallites that make up the material’s structure, the pattern on each dial will be unique, guaranteeing that no two watches will be entirely identical. The handset and hour markers are the same style that can be found on the stainless steel version of the Seamaster Diver 300M 60 Years Of James Bond watch. However, they have been given black outlines on the Canopus Gold edition for added contrast against the asymmetric pattern on the dial. 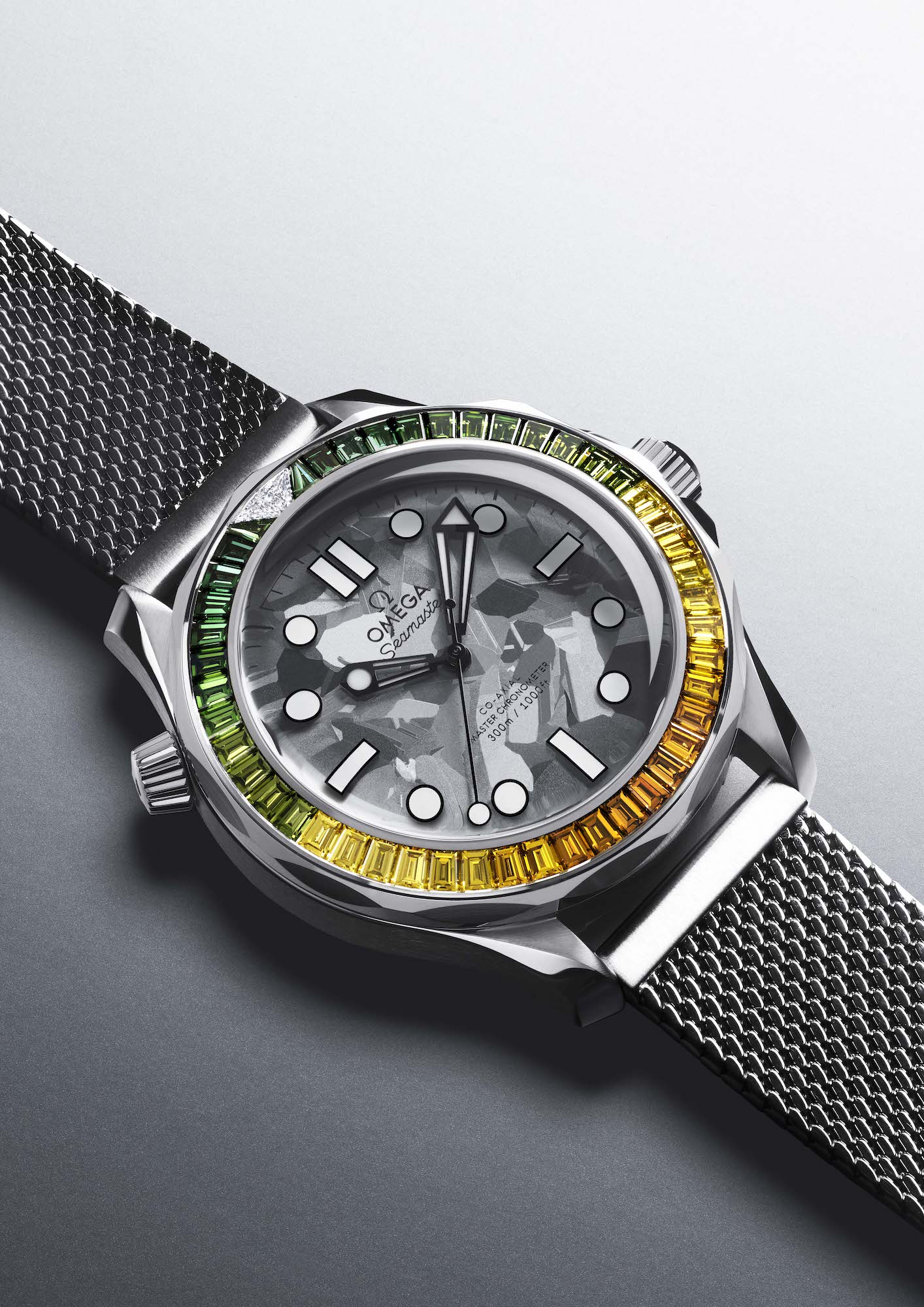 While the dial is certainly a significant aesthetic departure from the stainless steel version, it is the bezel on the Canopus Gold edition that is this model’s single most defining feature. As a tribute to the colors of the Jamaican flag, the bezel is set with green and yellow treated natural diamonds in ten different shades that form a gradient pattern that transitions from forest green to orange cognac as it moves around the bezel. As an additional reference to the 60th anniversary (which is known as a “diamond anniversary”) the top of the bezel is set with two additional clear diamonds that create a triangle shape and recall the zero-marker that is typically found on the bezels of dive watches. While a tribute to the flag of Jamaica isn’t exactly the most obvious James Bond reference, the colorway looks incredibly nice in photos, and it’s undeniably interesting to see Omega draw inspiration from things outside of the 007 film franchise itself. 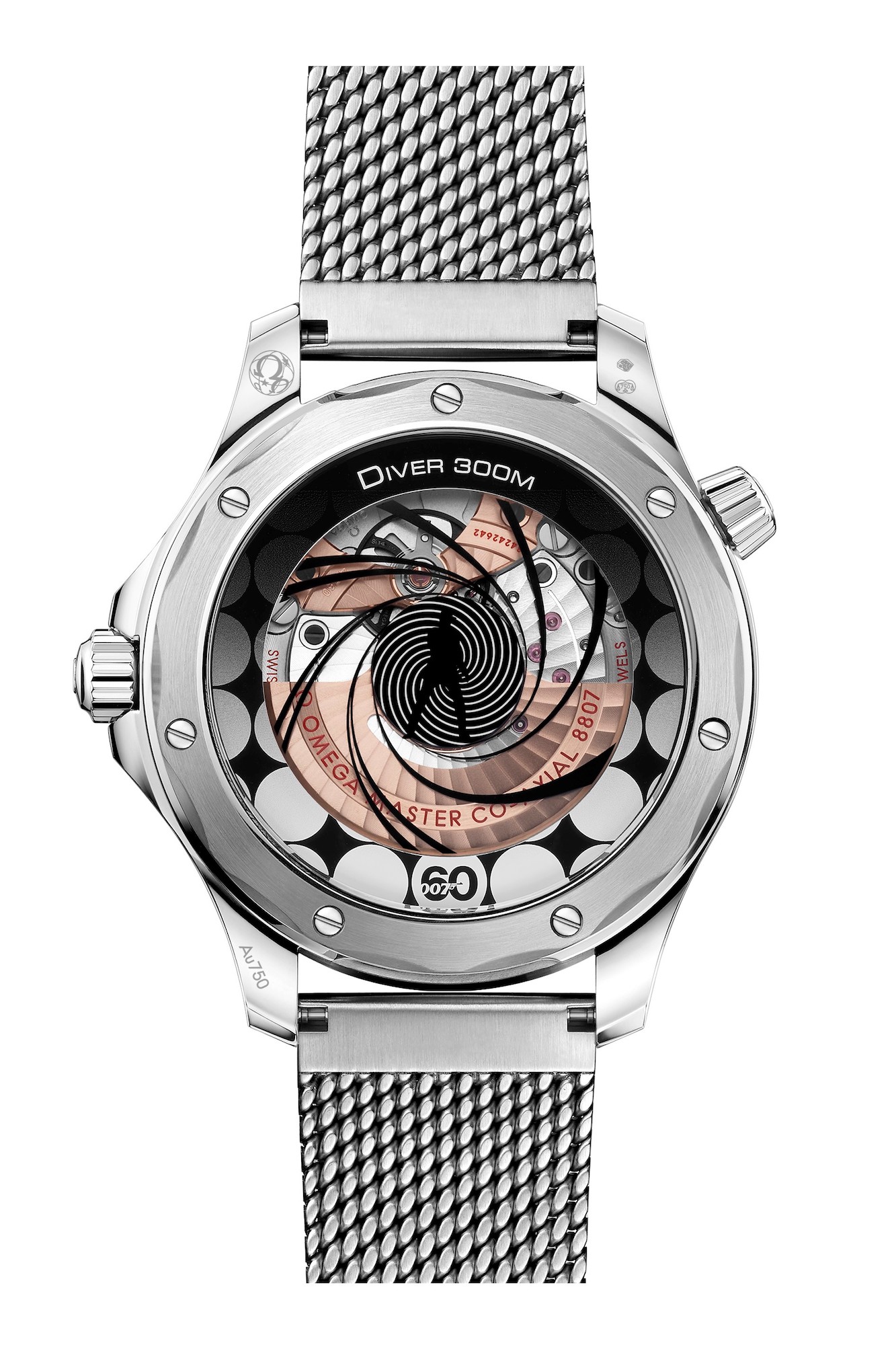 Just like the stainless steel model, the Canopus Gold edition of the Omega Seamaster Diver 300M 60 Years Of James Bond also features the same continuous “moiré” effect animation on its caseback. However, while the standard stainless steel model receives the Caliber 8806, the movement powering the Canopus Gold version is the Caliber 8807. The overall design and performance specs are identical on these two movements, meaning that the Co-Axial Master Chronometer Caliber 8807 also runs at a frequency of 25,200vph (3.5 Hz) and offers users a power reserve of approximately 55 hours. That said, the Cal. 8807 is the luxury-oriented version of the Cal. 8806, and it therefore features a balance bridge and oscillating weight crafted from 18k Sedna gold, which can be seen behind the animation through the watch’s sapphire display caseback. 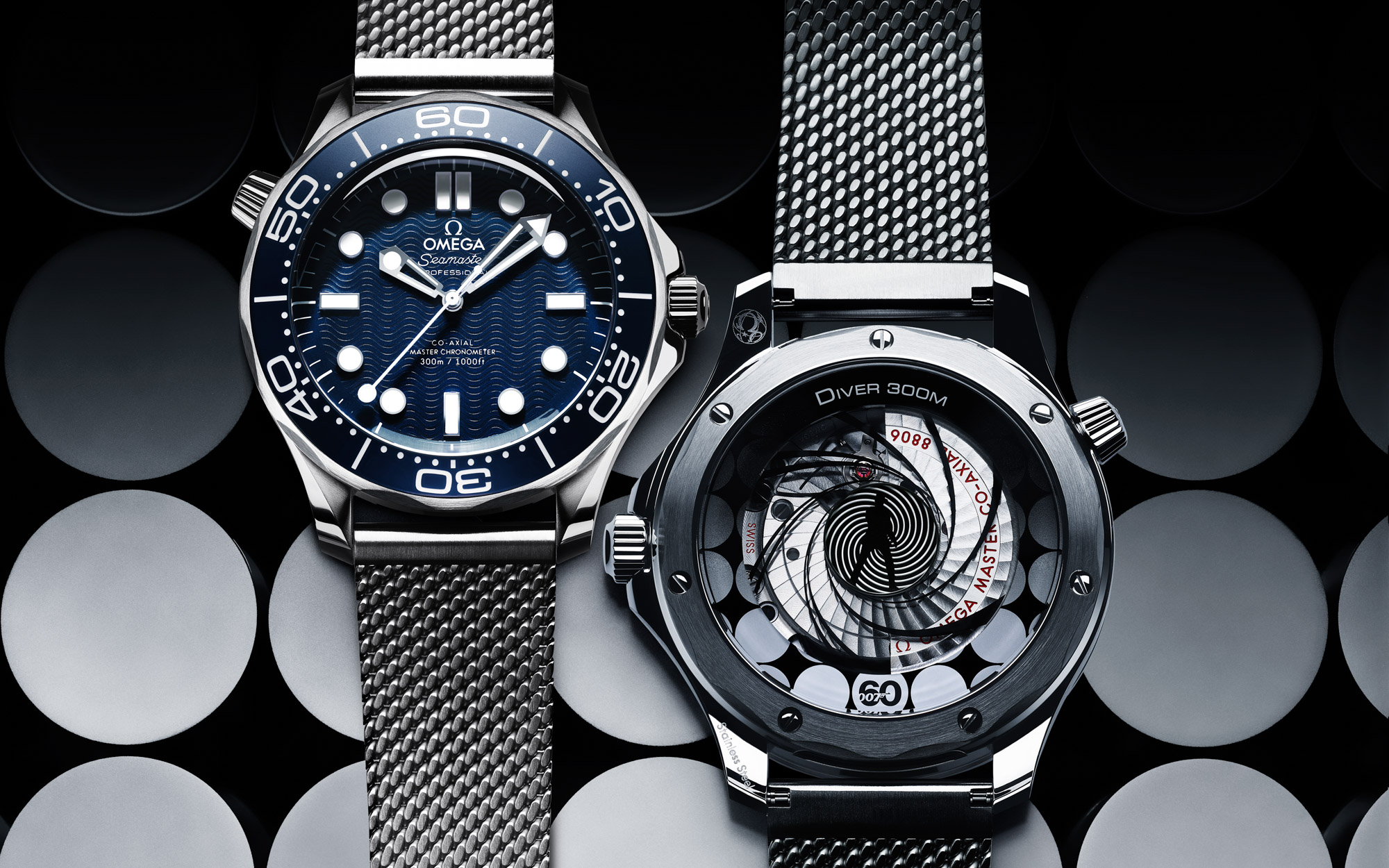 Given that these 60 Years Of James Bond watches are likely to be purchased as collectors items, both the stainless steel model and the Canopus Gold edition come in special presentation boxes. The stainless steel version comes packed in a blue wooden box that features the wave pattern found on the dial of the original Seamaster Diver 300M worn by James Bond, with three dots inspired by the classic Bond opening title sequence. Buyers of the Canopus Gold version receive their watch in a box crafted from mango tree as a reference to the famous song from the first James Bond film, and it is adorned with mother-of-pearl marquetry and a 60 Years of Bond logo. As far as pricing, the stainless steel Omega Seamaster Diver 300M 60 Years Of James Bond watch is accompanied by an official retail price of $7,600 USD, and while no official US price is listed for the Canopus Gold edition, it will set you back somewhere north of $140,000 USD (135,000 CHF). While the diamond-set version in 18k gold is expectedly incredibly expensive, the stainless steel version represents somewhat of a value. At its current price, it costs a full $1,600 less than the titanium No Time To Die model on a bracelet, while also providing a novel and undeniably fun-to-watch caseback animation. Some Omega watches that celebrate the James Bond franchise can be a bit too kitschy on-the-nose when it comes to their 007-inspired design elements, but neither of these two Seamaster Diver 300M 60 Years Of James Bond models even look like 007-themed watches… until you flip them over and watch the film’s iconic opening sequence on the caseback. For more information, please visit the brand’s website.