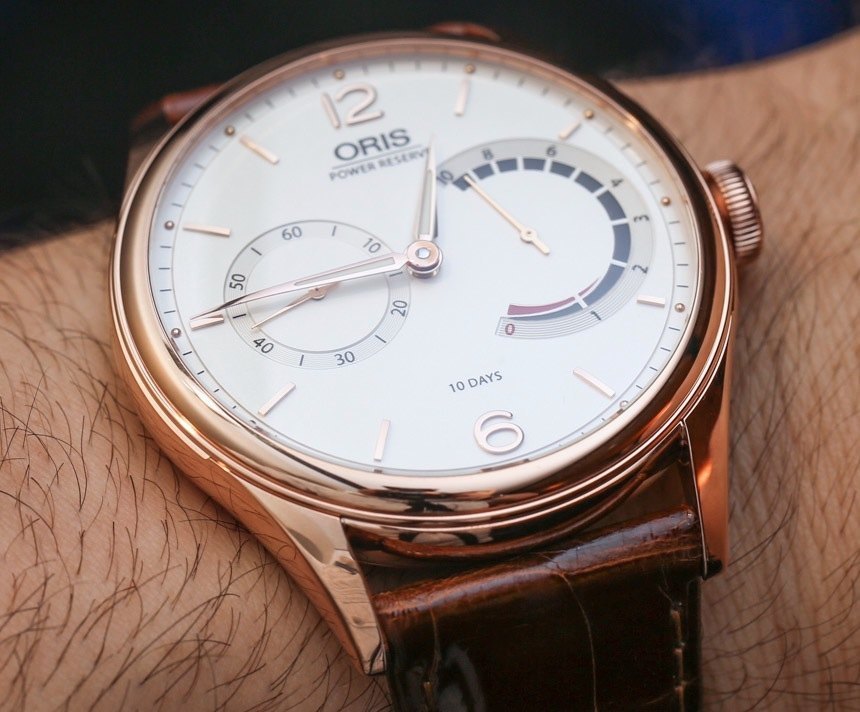 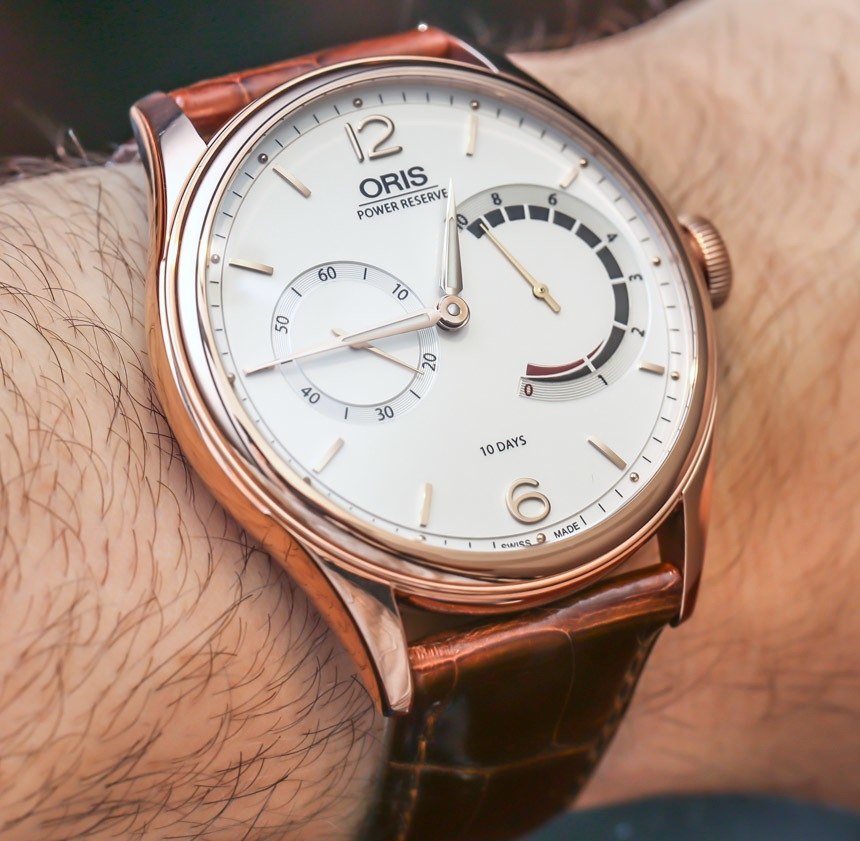 One of the most exciting announcements for Oris watches last year in 2014 was the debut of their first (modern) in-house made movement known as the Calibre 110 (announced on aBlogtoWatch here). Until then, Oris hadn’t produced an in-house movement since 1982, at which time, the company decided to only produce mechanical modules that would sit on top of movements produced by companies such as ETA. Since 1982, Oris has come under new ownership, so the Calibre 110 (named in honor of the 110th anniversary of the watch maker) is the first in-house made movements from Oris in this modern era. Let’s check out the first timepiece to include it. 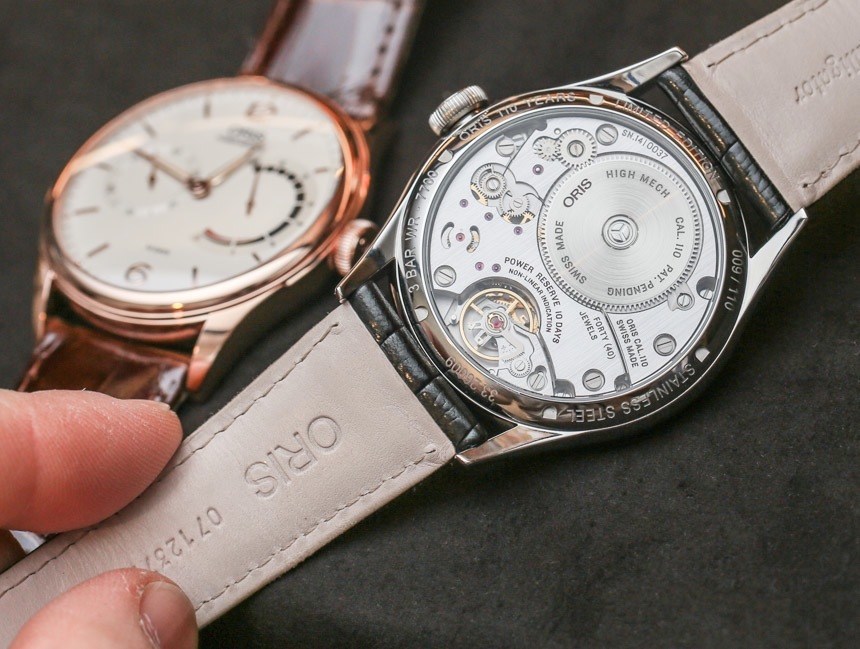 To house the new in-house made mechanical Calibre 110 movement Oris decided to go classic. I recall speaking with Oris prior to the public launch of the 110 and asked “why do brands always choose classic looking timepieces [almost exclusively] to house new movements?” Rolf Studer thought about this inquiry for a while, his ponderous silence made it clear he wasn’t sure of the reason himself. Why not a dive watch or something sporty to debut a new engine?

Rolf felt that a good enough answer was to suggest that novelties such as new movements are often first purchased by watch collectors, and it seems like most watch collectors tend to have rather traditional tastes. OK, that makes sense. I was happy with that answer, but I still think that a lot of other watch lovers who are more into sport watches would be happy to jump on something like the Caliber 110 showing up in say… an aviation-style watch (something Oris happens to be good at producing). 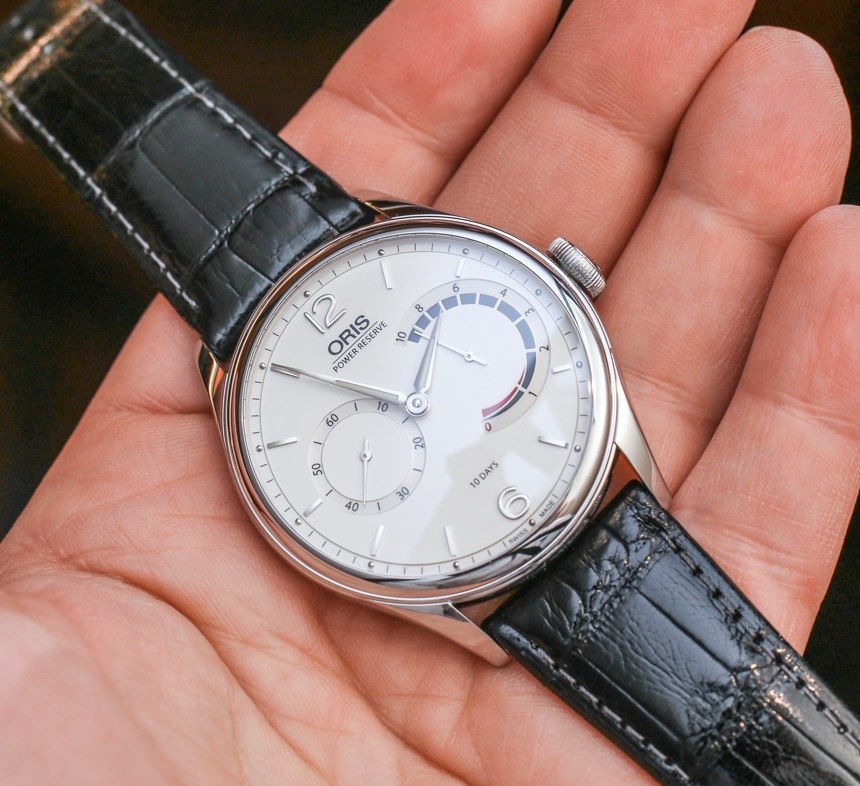 None of that is meant to suggest that the Caliber 110 will remain in classic-looking timepieces. Oris started it off by putting it in a limited edition of 220 pieces (between the gold and steel versions) “Oris 110 Years Limited Edition” watch, but it could just as easily show up in other watches later. In fact, the real test will be to see what Oris comes up with at Baselworld 2015. There are three options, and they will indicate how well Oris is able to produce the movements. It actually takes a lot of skills and special machinery for a watch brand to produce their own movements in-house – and even after a brand “debuts” something new, that doesn’t necessarily translate into the ability for them to produce a lot of them and send them to market. Quality is an entirely other story. 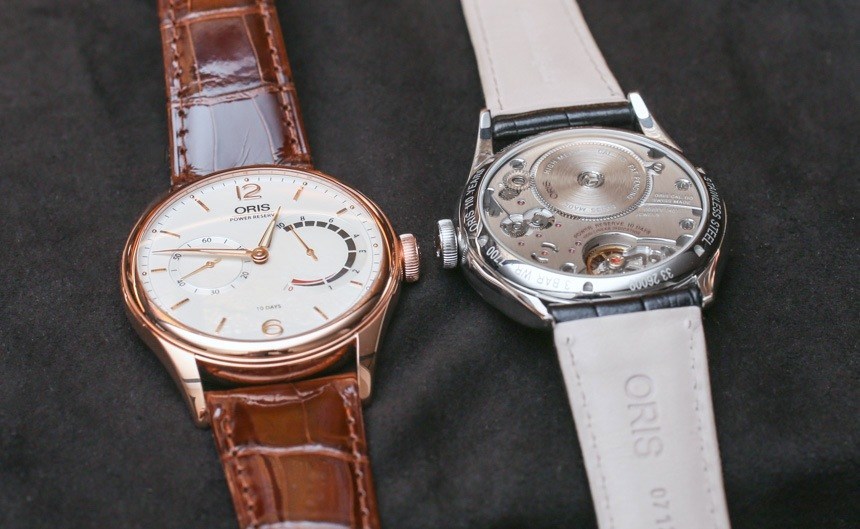 Option one is that Oris will not have anything new related to its ability to produce in-house movements. This isn’t likely, but it could happen. I say this because the Caliber 110, while unique, is not that complicated, and I would be surprised if they are having issues getting it to work. Option two is that another new watch will debut with the Calibre 110 movement that is different from the 110 Years Limited Edition; like a sports watch, for example. This would indicate that Oris has the manufacturing down for the Calibre 110, but they aren’t at a point where they can build upon their new base movement. Option three is that Oris releases a new movement built on the Calibre 110 but with additional complications. I am guessing that one year later is a bit soon for that. 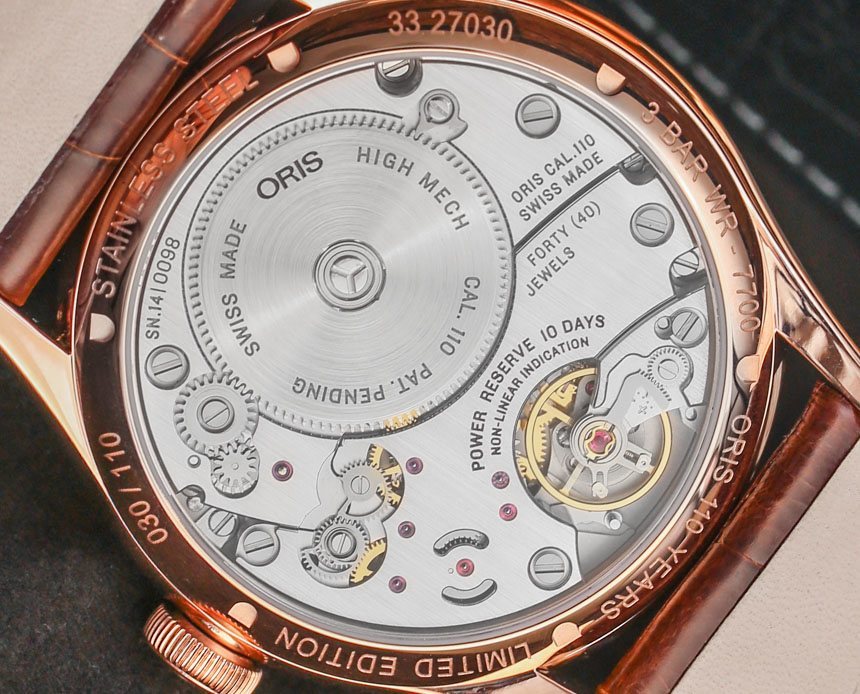 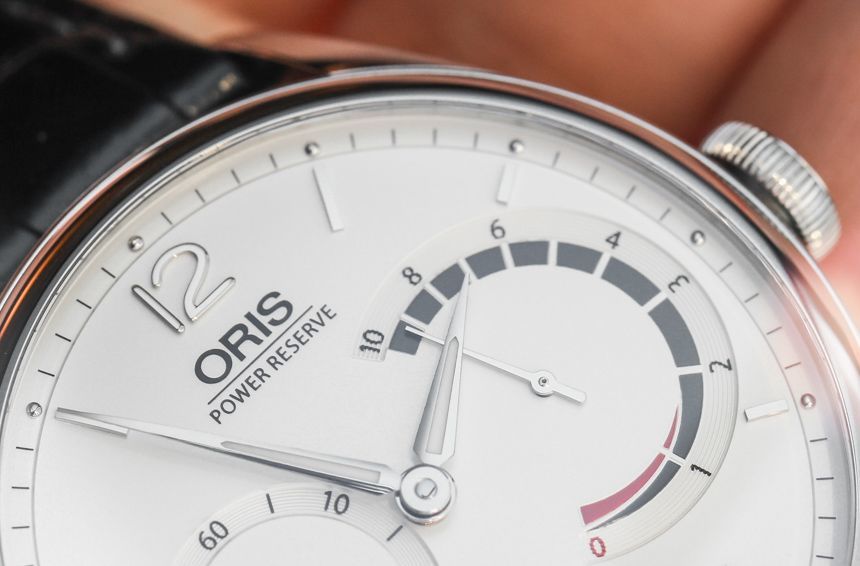 What is more interesting is the length of the power reserve which is a full 240 hours, or 10 days. That means the Oris Calibre 110 can go for more than a week between windings while operating at 21,600 bph (3Hz). A small “10 Days” label on the dial reminds you of that fact. That lower label I don’t mind, but I do think it wasn’t particularly useful for Oris to print “Power Reserve” under their brand logo. This is like when automobile companies place useless labels and emblems on car bodies. I recall growing up seeing silly things like “Fuel Injection” and “All Wheel Drive” on the sides or rear of cars. Does this evoke taste and distinction? Does this serve some type of valuable purpose for other cars on the road? Or is this just some type of odd advertising to help make owners feel better about their purchases and neighbors feel self conscious that their own cars may not have such features. Personally, I don’t want that stuff on my car. 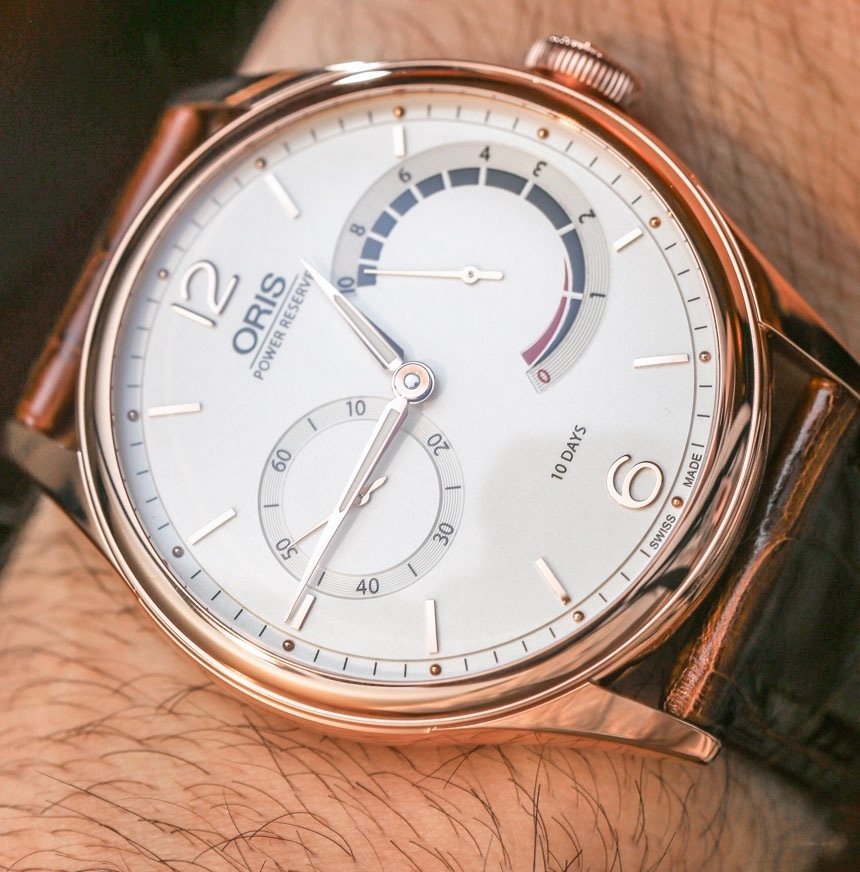 Watch companies sometimes do the same thing. In some instances, they just feel as though some text looks aesthetically pleasing in a particular position, so they feel the need to write something. Other times, I feel as though they are trying to educate very unsophisticated sales people on some of the main talking points of a watch. “Uhhh, well this watch is an Oris you see. It is…. made in Switzerland. That’s really important because Switzerland makes good watches. What makes this watch different is that it has a power reserve on it, and it has 10 days of power. That is a lot more than most other watches. You should really think hard about this watch.” See, all that from just a few words of text on the dial. SOLD! 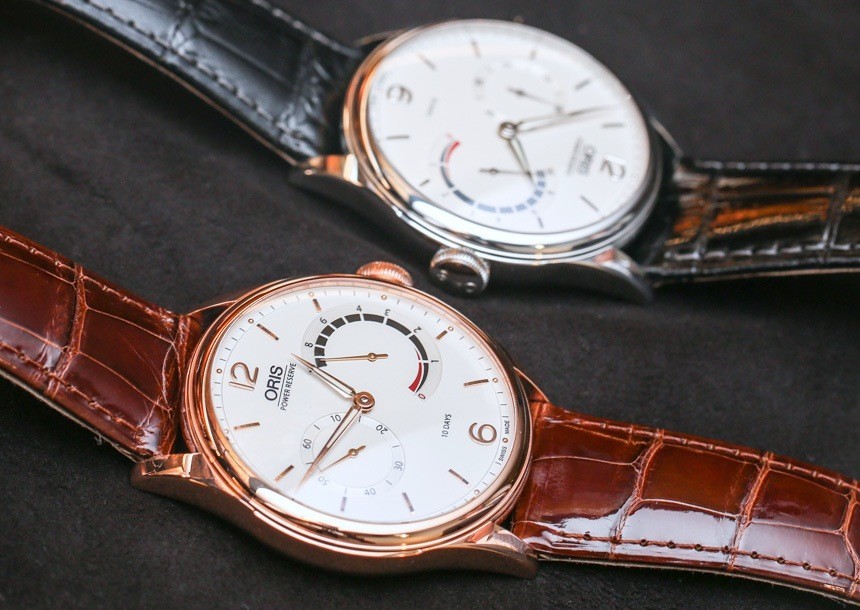 At 43mm wide, the Oris 110 Years Limited Edition watch wears substantially – which is something I prefer when it comes to more classic watches. I know we are all divided on watch size – but I just happen to like the bolder look of a larger dress watch. With its longer lugs, the Oris 110 Year Limited Edition does not wear shyly, but at the same time, it isn’t a massive watch. Over the dial is a domed AR-coated sapphire crystal, and another sapphire crystal is used over the caseback with an expansive view of the movement. Oris kept the watch classy with a polished case, but it doesn’t wear in a demure manner at all. 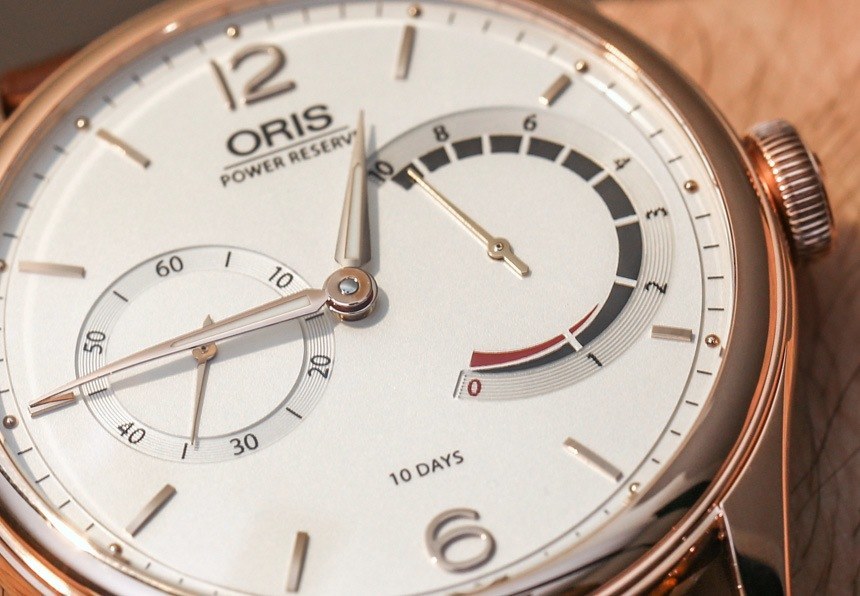 Legibility is also pretty good thanks to properly sized hands (which have applied luminant). The dial isn’t a masterpiece or anything, but it gets the job done and will satisfy watch lovers. The hint of red in the power reserve takes the design to sporty places – but it does prevent the watch from, strictly speaking, being a formal dress watch when things more-or-less need to be monochromatic, if you want to be snooty about it.

As a hand-wound movement, the crown is thankfully large and comfortable – though you do need to wind the movement up a bit. The movement design is very much trying to be industrial and comment on the character of Oris as making “real watches for real people.” I like that philosophy and appreciate that Oris isn’t suddenly trying to make a watch that would look better with someone else’s name on it. Oris also isn’t going too upmarket with the Oris 110 Years Limited Edition. While the price is a bit more than you’ll find for most of their other dress watches, these are by no means the most expensive watches they offer (at least in steel). Having said that, if you are just looking for a decent looking daily wear with a good movement and sensible traditional looks, you could save a few grand and find something a bit more simple. 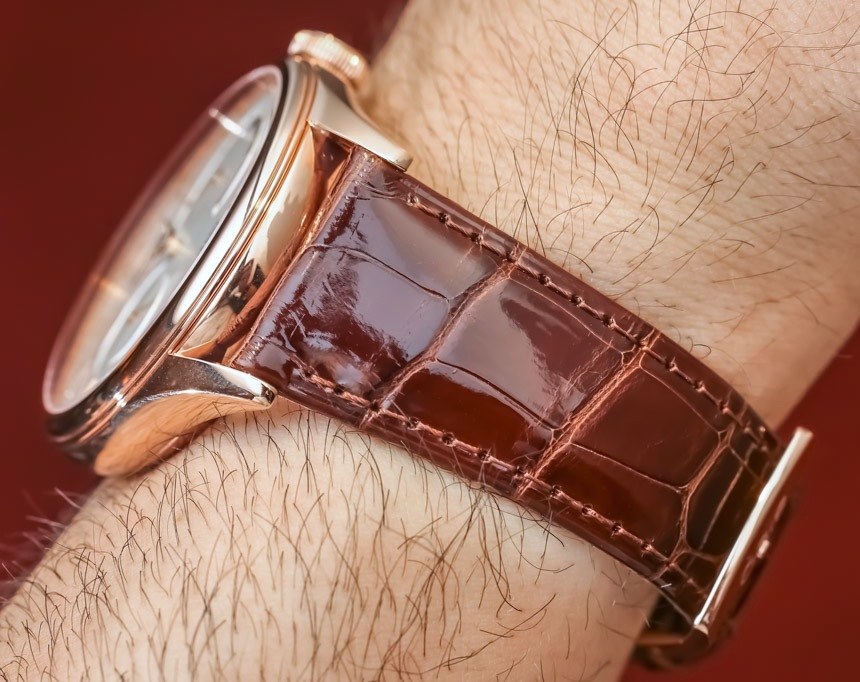 I say that to comment on the fact that the market for watches like this is complicated and highly competitive. For me, Oris is all about making great sports watches. aBlogtoWatch’s Matt Diehl recently reviewed the Oris John Coltrane, which is another dress watch alluding to a side of Oris I don’t personally pay much attention to. This is why it is good to offer a diversity of opinion on the site, because what might not interest me might be right up your alley. For some people, the Oris 110 Years Limited Edition might be perfect.