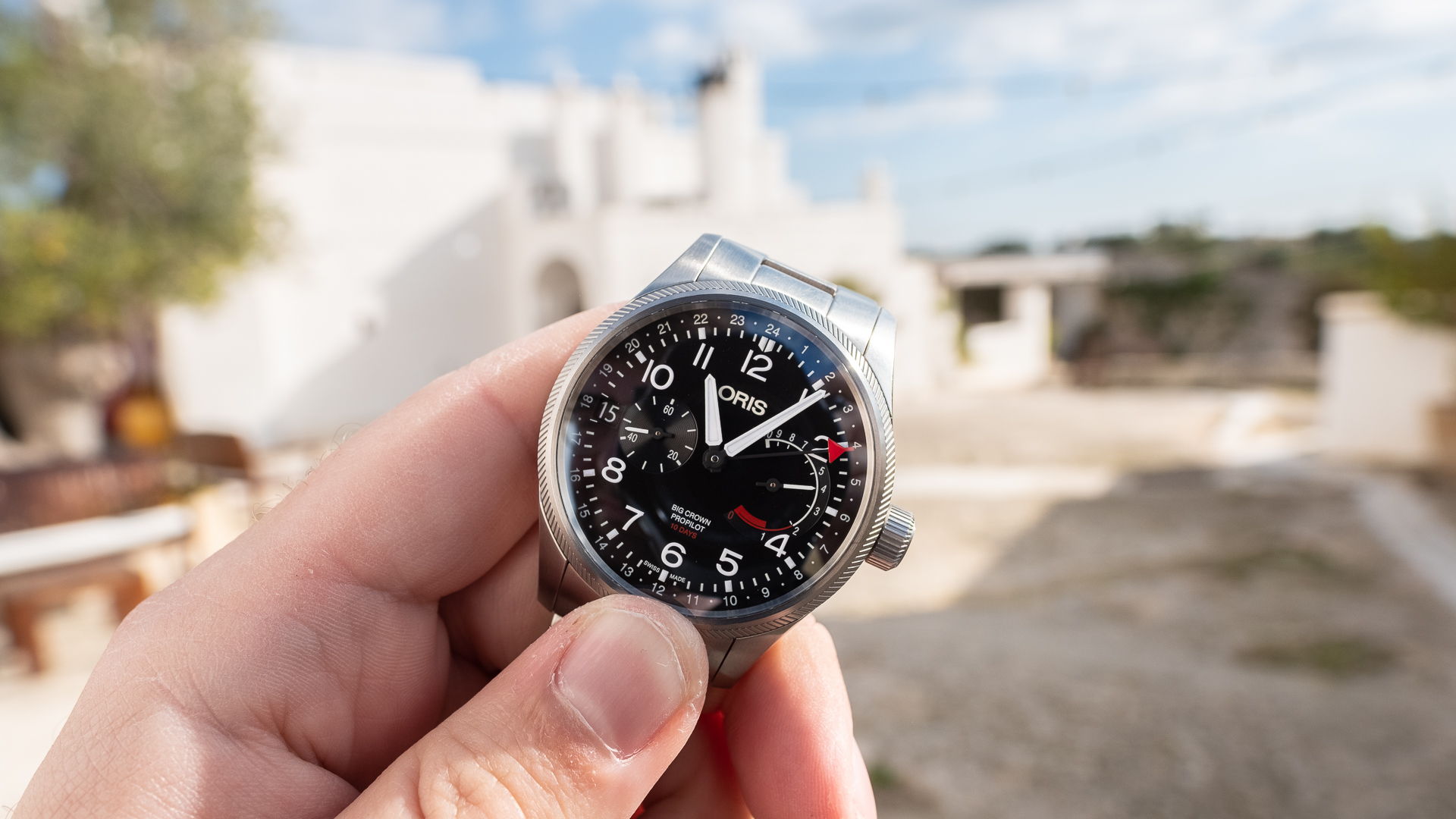 My primary attraction to watches has always generally focused on tool watches. I buy a lot of divers, I like pilots watches, and in my eyes, nothing beats a good chronograph. However, one of the purest forms of watch complication for my use remains a GMT (or a second-time-zone–more on this later) function. GMT watches have a lot of practical uses, especially with travel, business, or for those people who have family that they communicate with frequently in different time zones.

Personally, I mostly use this function when I travel. In some senses, a GMT serves to “ground” me to home when I travel, allowing me to see at a glance that if I text Mom from Italy whether or not I’ll get a response. Oris has developed an excellent option in this space with their Oris Big Crown Propilot Caliber 114 GMT.

For a long time, Oris has served as a really great gateway into high functioning and high-value pieces. They first introduced the Big Crown Propilot in 1938 with the idea that the oversized crown would offer pilots a better grip with gloved hands. Since that time “Aviation” has developed into one of the brand’s four main focuses. These are often referred to as the four “Oris Worlds” which are diving, aviation, culture, and motorsports. 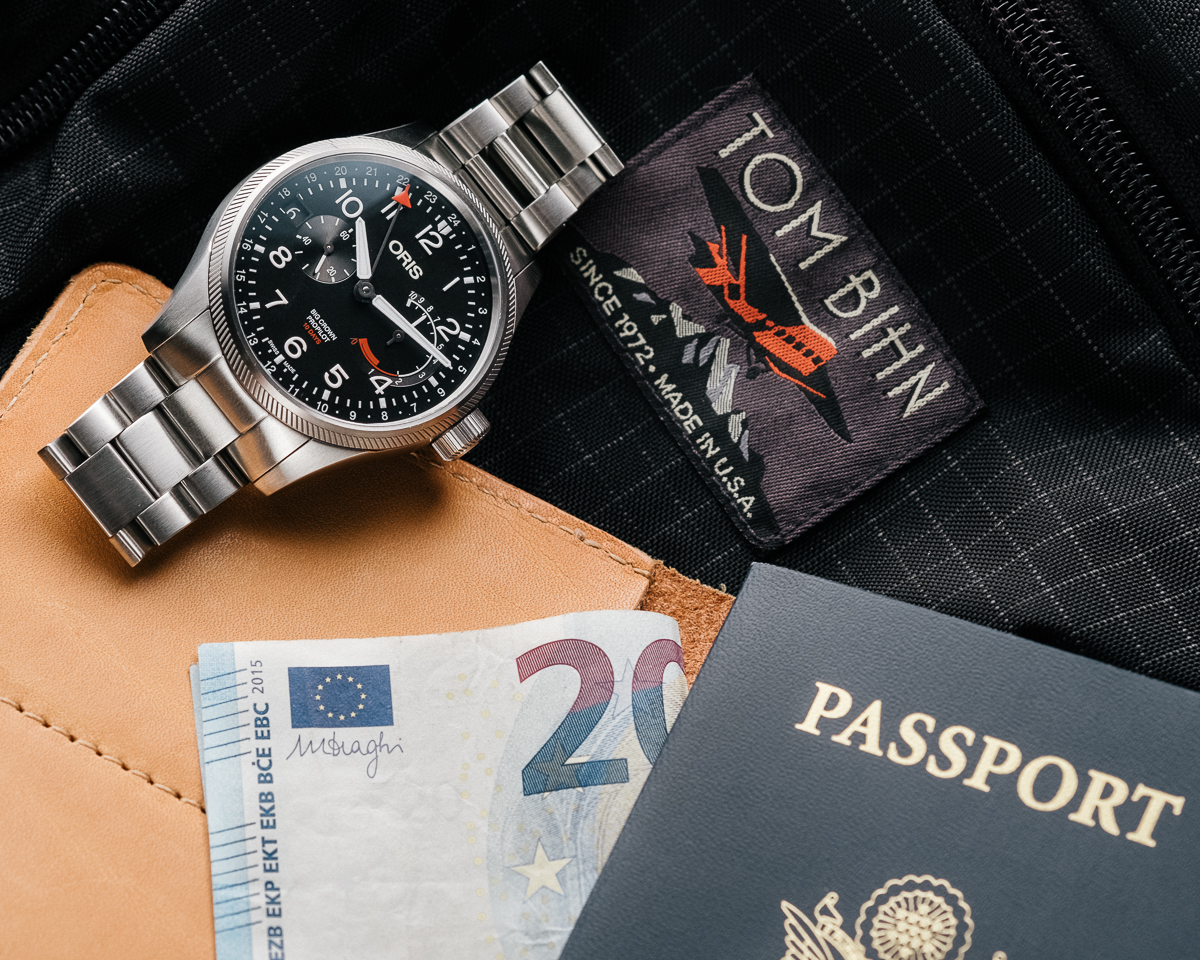 The Oris Big Crown Propilot Calibre 114 is the newest addition to the aviation line, offering an enormous amount of functionality featuring Oris’ newest in-house movement. I covered its release during Baselworld 2018 and knew it was something that I wanted to take a closer look at. An upcoming trip to Southern Italy offered the perfect opportunity for me to use this watch as it was intended. 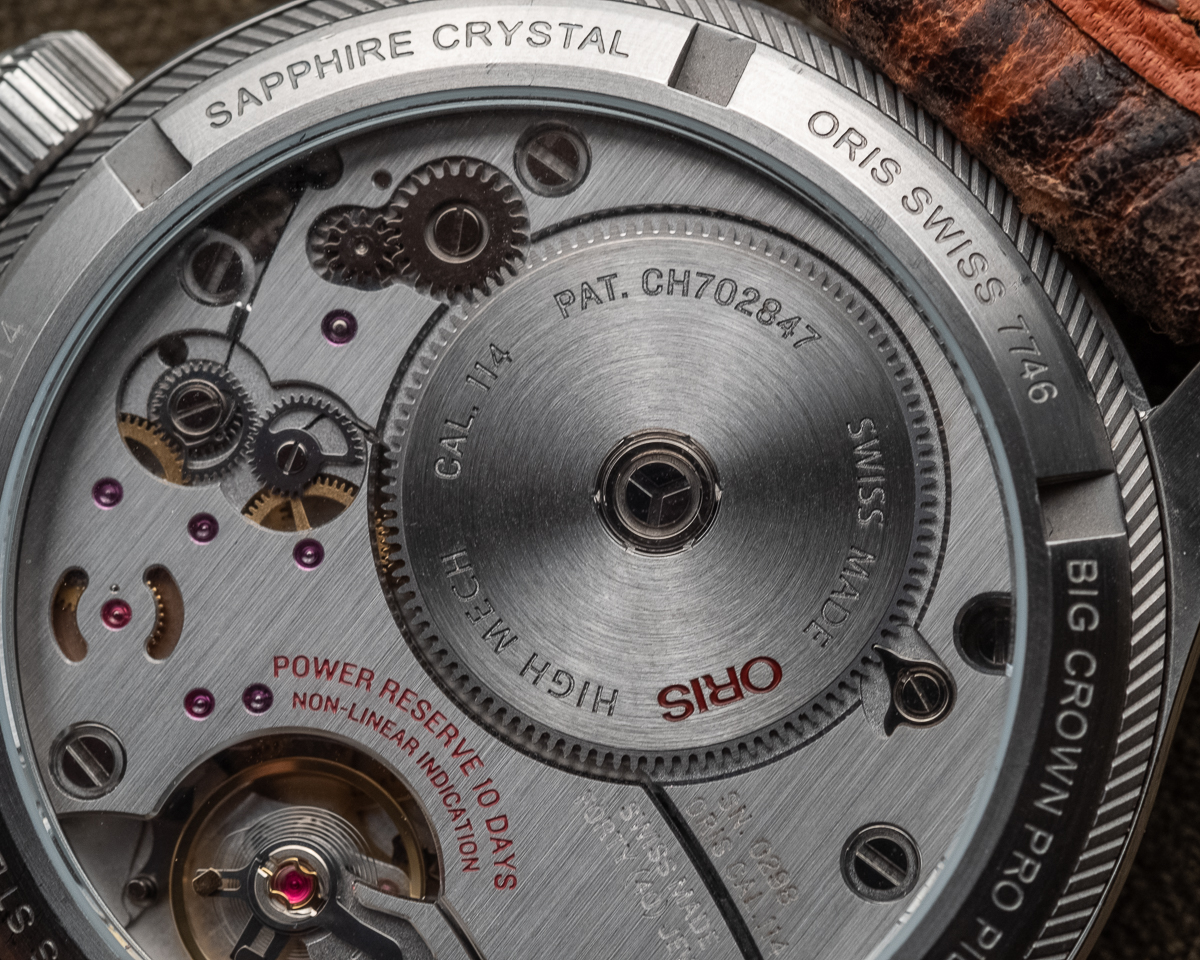 I’m going to address the movement right up front as I think it’s the biggest topic and most interesting aspect of this particular watch. The movement in the Big Crown ProPilot is the Caliber 114. This is Oris’ fourth modern in-house movement. Oris began developing in-house movements in 2014 after a 35-year break. The four existing Oris in-house movements (Calibers 110, 111, 112, 113) and the new 114 are all hand-wound, 10-day power reserve movements.

What makes the Caliber 114 unique amongst these is the 30-minute granularity that you get with the GMT complication. The hand adjusts in two “clicks” (if you will) per hour, allowing you to account for timezones in places like Newfoundland, India, and Australia among others. This feature in itself is very specific and will likely not be overly applicable to most end-users, but that doesn’t negate the interest and appeal of this sort of meticulous movement making. 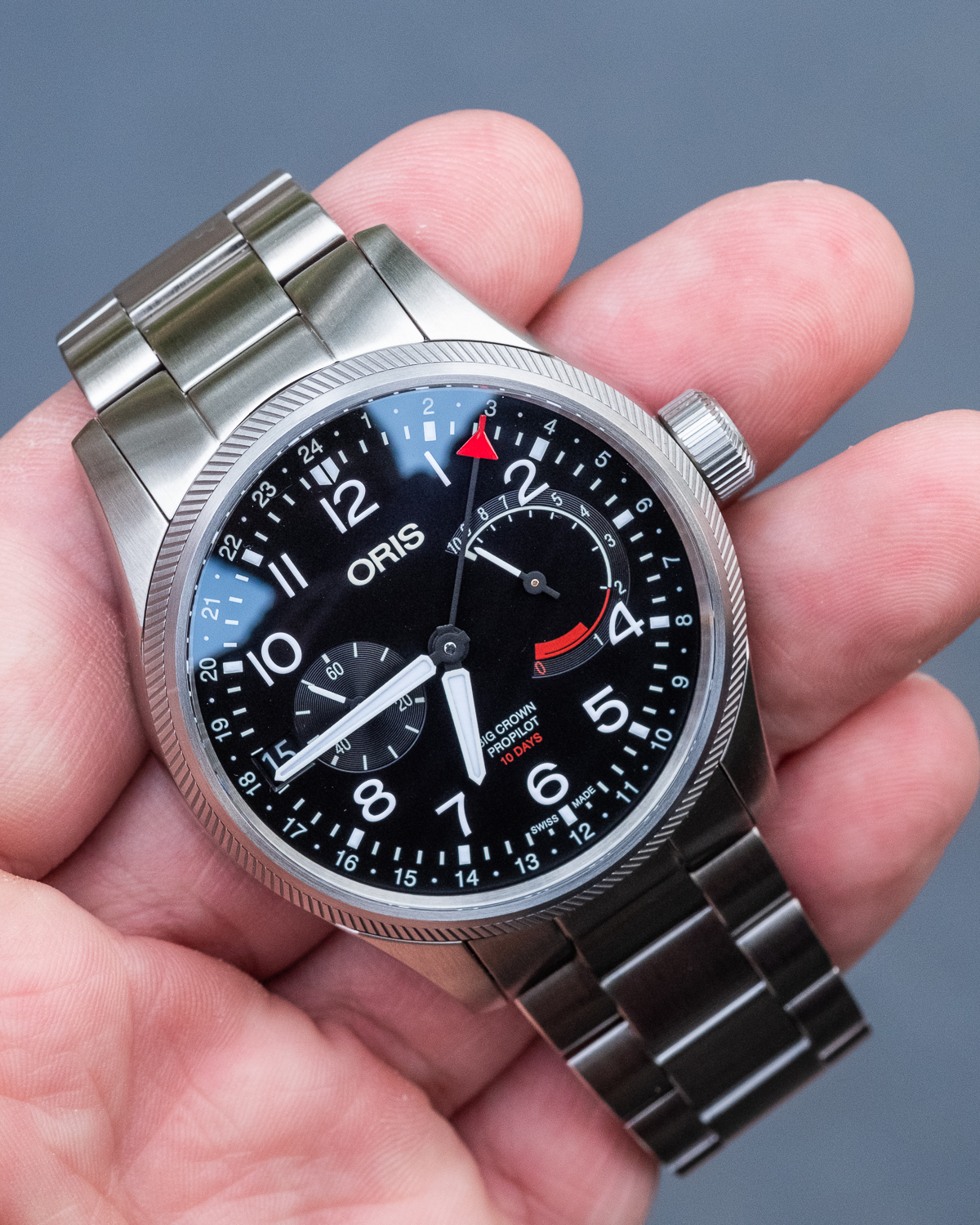 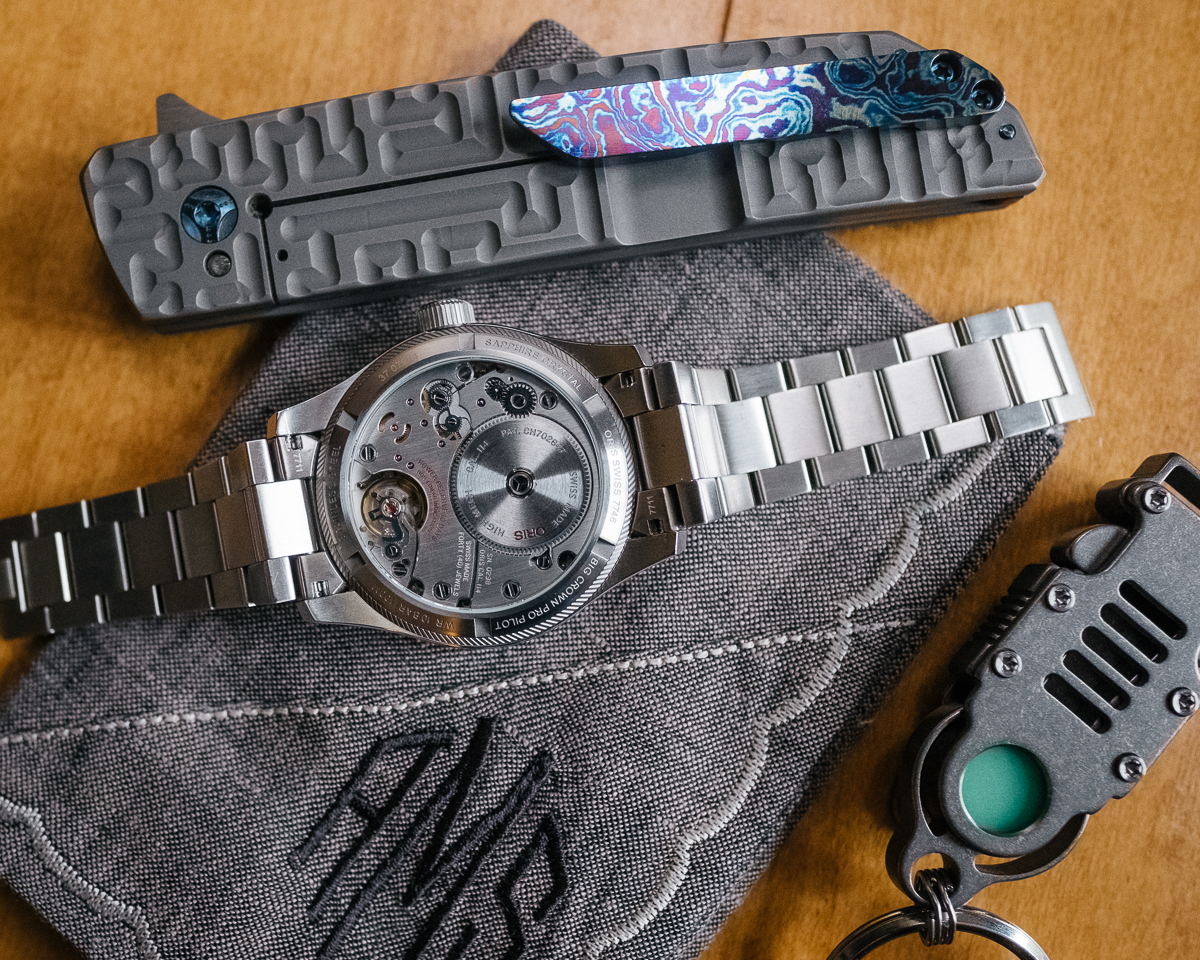 My trip to Italy was 9 days long and I left on Friday, November 9th and wound the watch on that Thursday. We landed back home on the 18th, and it still had some power reserve left which is remarkable to me. Oris takes great pride in their ability to provide 240hrs of running time out of a single barrel. The mainspring when uncoiled is 1.8m in length when laid flat. This also means that it takes a solid 30 seconds or more to wind it fully. Flaw or feature? I’m not sure. I like it, but you can’t wind it as you run out the door. That’s just the trade-off you make. 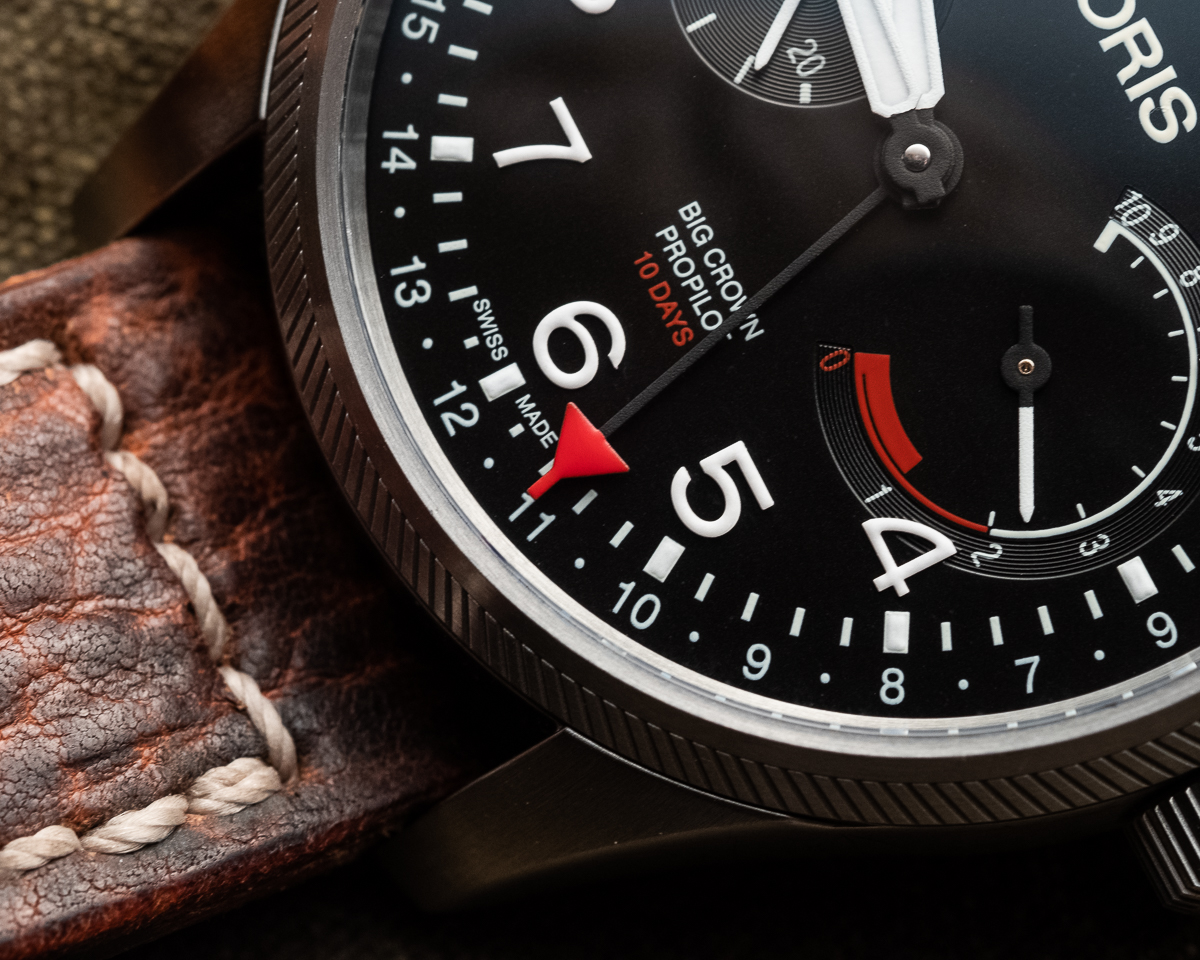 Next, let’s go over some GMT stuff. The Oris Big Crown Propilot Caliber 114 is what some in the business call a “caller’s GMT,” meaning simply that the GMT hand itself is quick set. This is in contrast to what’s sometimes called a “flyer’s GMT,” meaning that the local hour hand is quick set. The idea being that with a flyer’s GMT you can get off a plane and adjust the local time to your new time zone leaving the GMT hand where it was, whereas with the caller’s GMT where you adjust the GMT hand leaving the local time alone (think to track a time zone you’re not in). Both of these movements have their place, but for an actual traveler’s watch, I greatly prefer being able to adjust the local hour hand independently. 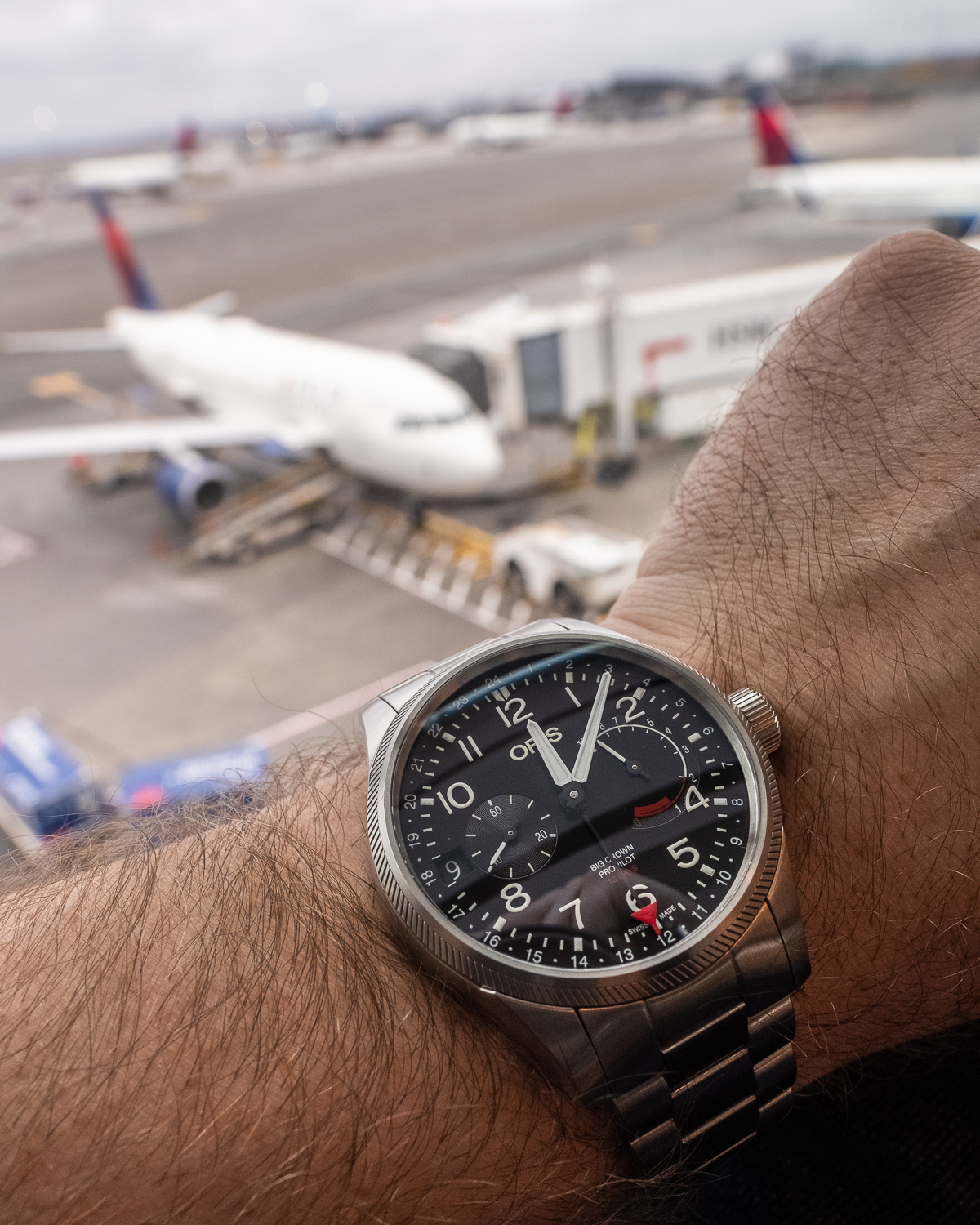 On my trip, I passed through three separate time zones (CST, EST, and CEST), in each of these timezones I had to first adjust the local time, then adjust the GMT back to my home time zone. Whereas with a flyer’s GMT you could simply jump the hour hand forward. Now, as granular as this seems, it makes a difference when you want to adjust your watch on the fly as opposed to needing to sit down and consult a local clock. This is excusable to me if you’re using a drop-in GMT movement like an ETA 2893. However, in Oris’ case, these are entirely in-house movements. I can’t help but question their decision in this area. 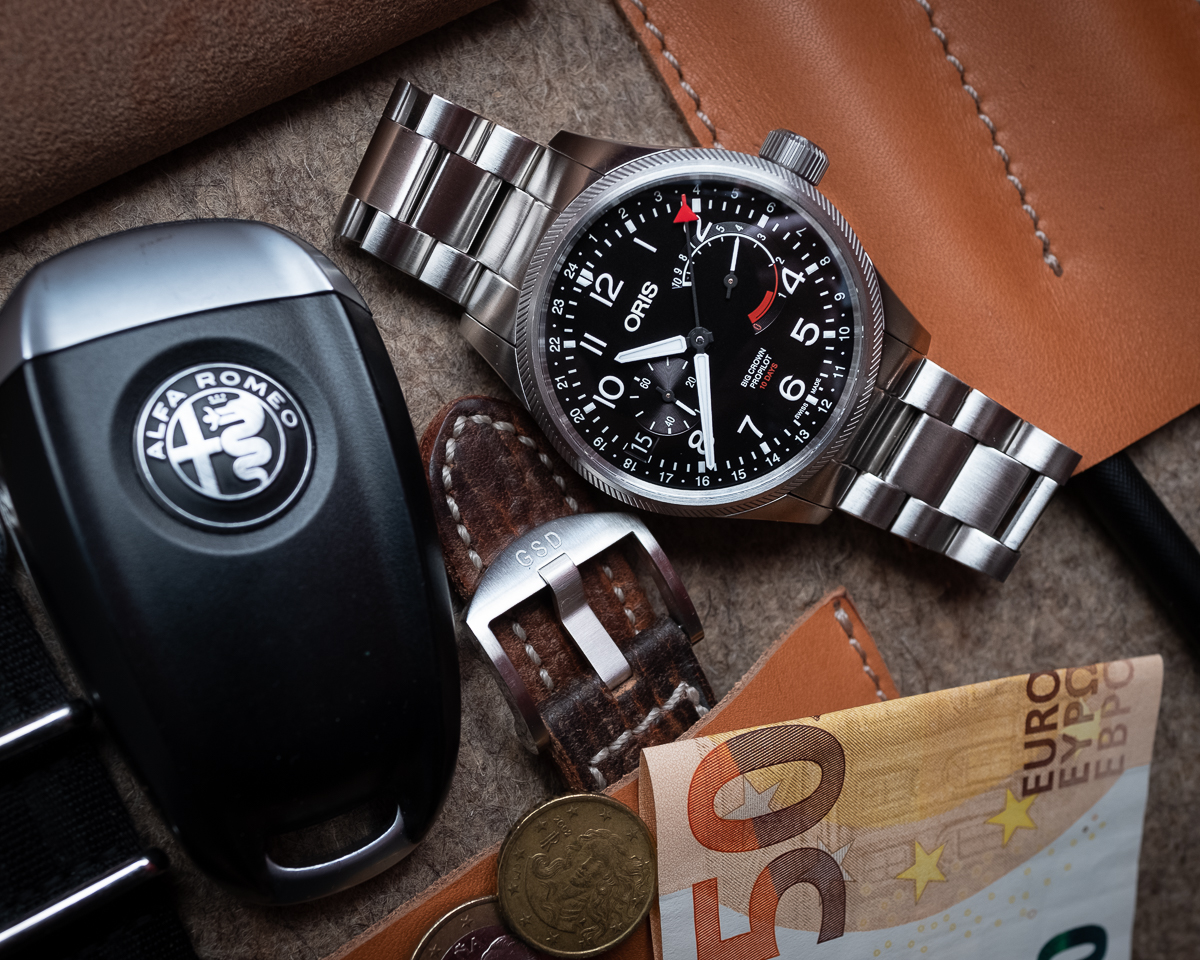 The Big Crown ProPilot family of watches tend to be larger pieces, some models reaching close to 50mm (like the Oris Altimeter). The Caliber 114 sits comfortably at 44mm according to both Oris and my calipers. More importantly, the lug to lug measurement is a hair under 53mm, and the case thickness is around 14.5mm. I would feel comfortable classifying this as a larger watch, but it wears comfortably on my ~7” wrist. When you begin to consider the amount of information being conveyed on the dial it makes sense why Oris has chosen to make these watches as large as they are, they needed the real estate. 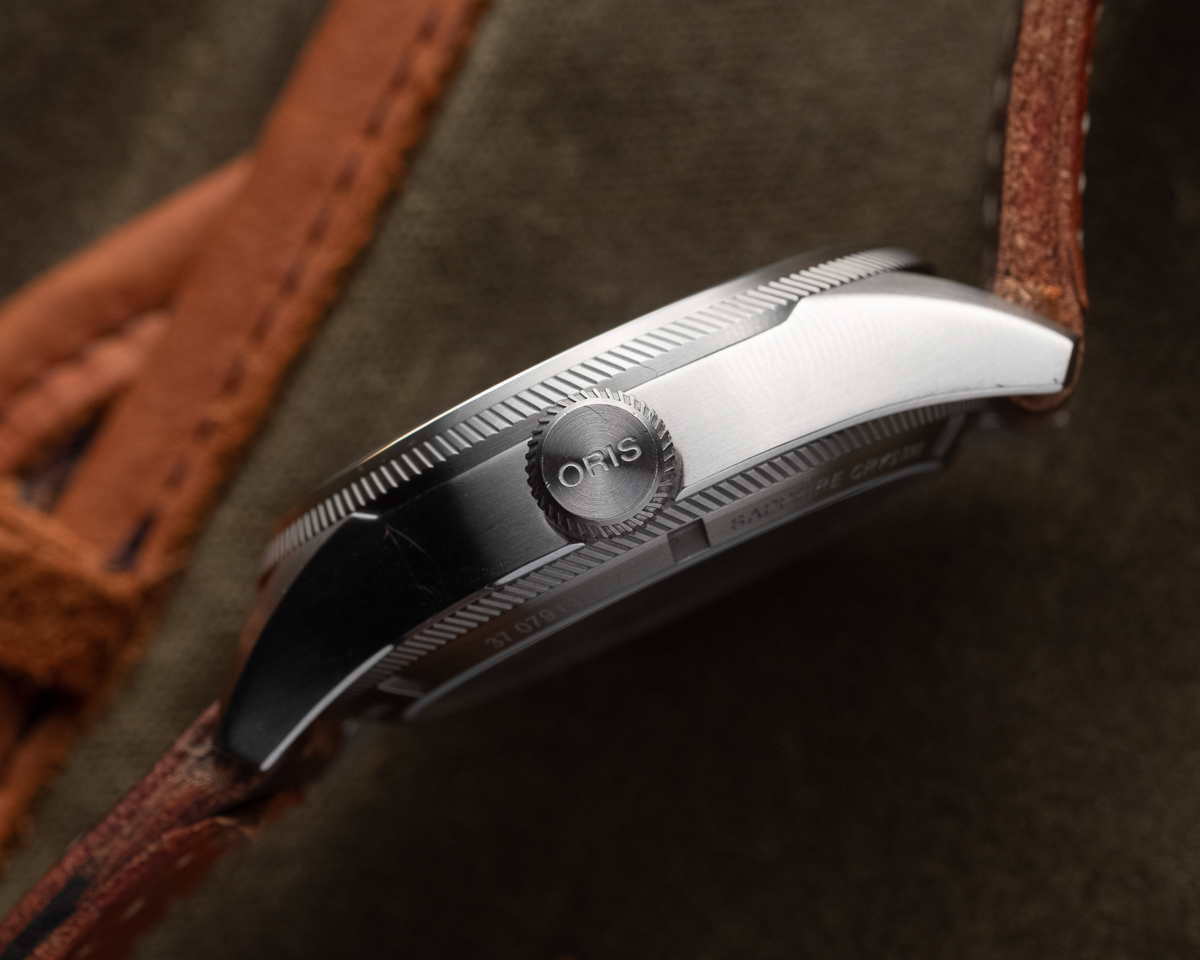 Moving past the case itself you’ll notice the signed 8mm “Big Crown,” a hallmark of the product line. It’s screw down, and tastefully jimped. This crown is also how you’ll wind the watch every week-and-a-half-ish so it’s good that you can get a solid grip on it. 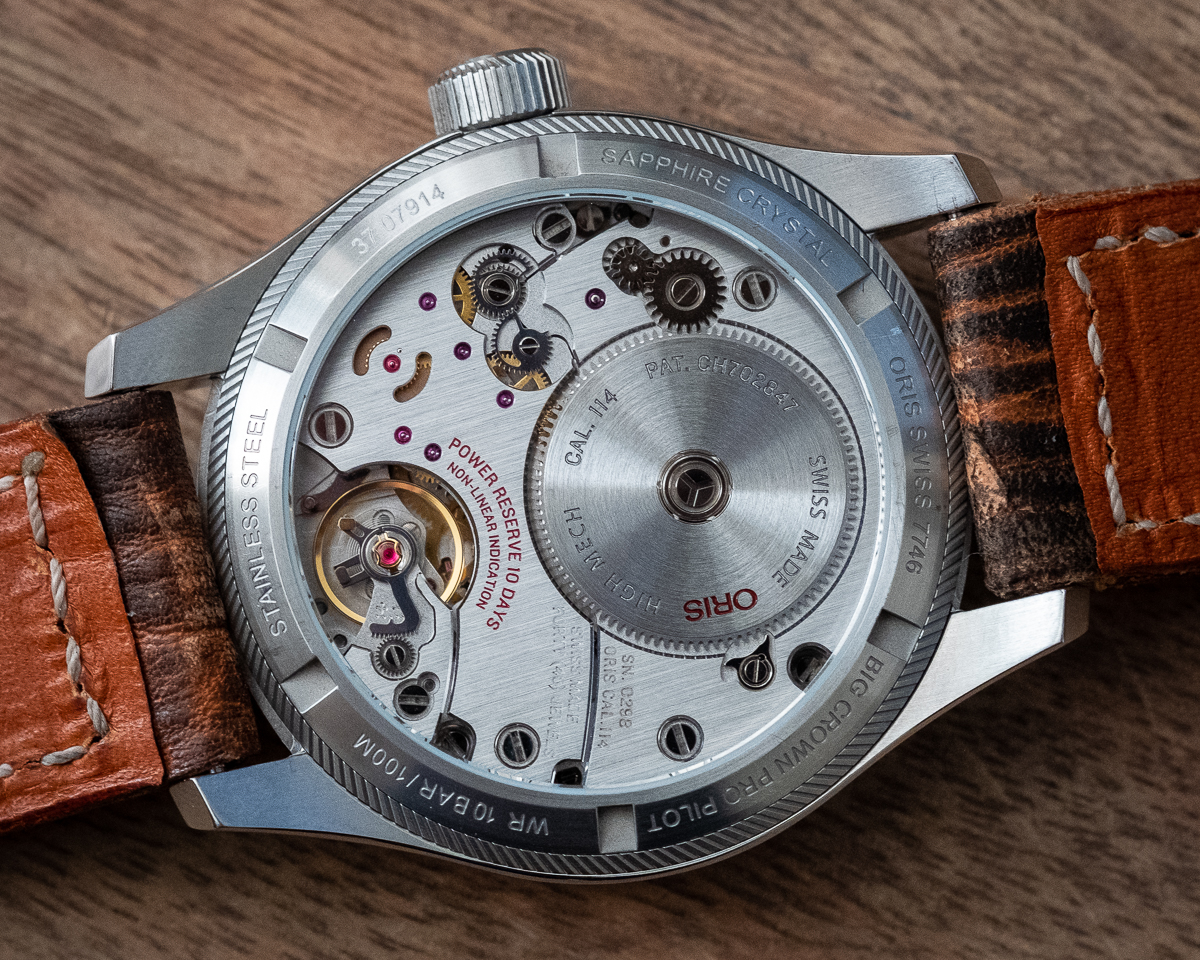 Flipping the watch over you’re treated to the remarkable display case back. Inlayed into it is a 33mm sapphire crystal offering you a panoramic view of Oris’ manufacture Caliber 114. On the far extremities of the caseback you’ll see some cross-hatched knurling (almost a coined edge) which is mirrored on the bezel surrounding the dial. This is another trademark of the ProPilot product line.

This robust case paired with the screw down crown affords this pilot watch a healthy 100m water resistance while not looking overly thick or overbuilt in any aspect. During my time with the piece, I found it comfortable and unobtrusive in my day-to-day life. It may have some challenges fitting under a tailored shirt sleeve, but this watch really would prefer to be on an adventure rather than in the boardroom.