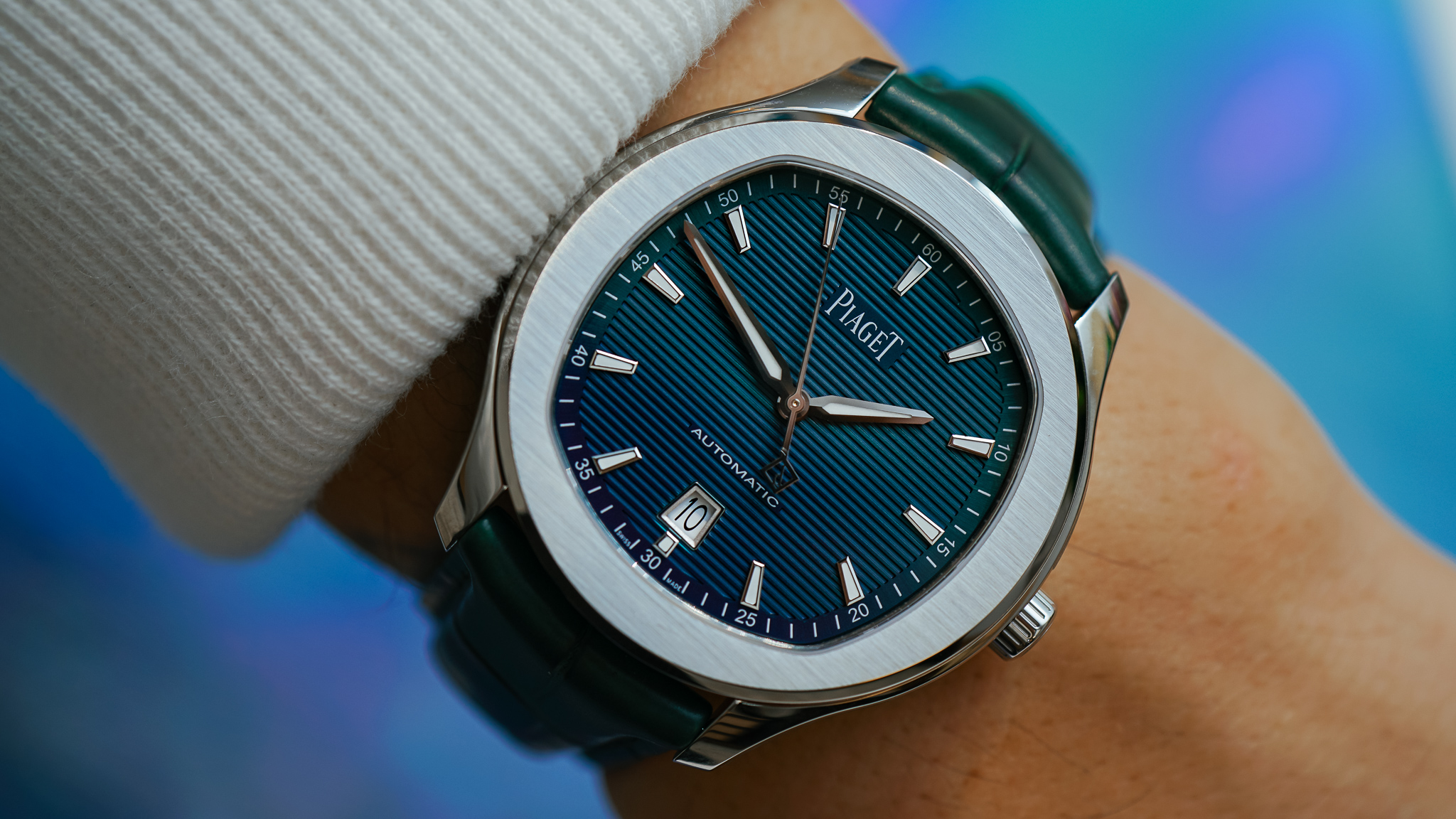 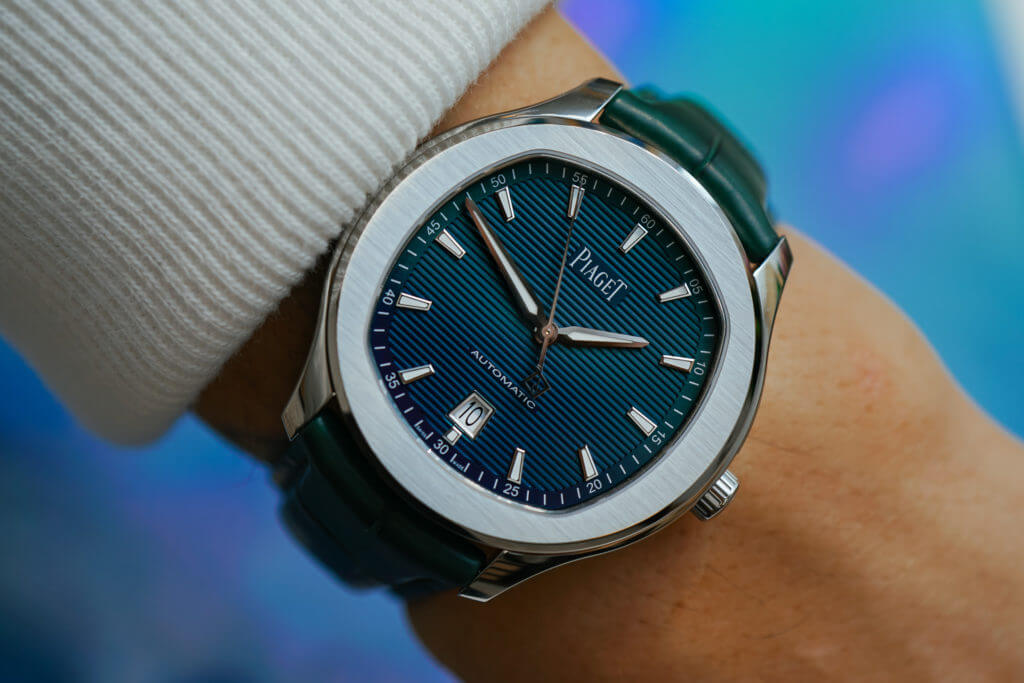 Here’s an unpopular opinion: When you pay over retail for a watch, you’re probably paying for something other than the watch itself. Not for an upgraded movement, a rarer dial, or the addition of precious metal in the case. Instead, you’re paying for hype and for bragging rights, and if those things are important to you, a five-year waiting list or the gray market price of $65,000 for a Nautilus start to seem less like highway robbery, maybe even downright logical. Anyone else who’s been living outside the luxury sports-watch bubble inhabited by speculators, and paying attention to its rapidly evolving competitive landscape, will have already noted that there’s an increasing number of excellent, immediately available alternatives in non-precious metals at a wide range of price points heating up the space, making this a very good time for watch fans, indeed.

I’ve said it before, and I’ll say it again: More competition in this space is good for everyone – for brands and for fans, alike. And regardless of where some have argued Bell & Ross sourced its inspiration, or how woefully late to the party Lange might be, I’d contend that the most important thing is that every new offering only adds to the conversation, somehow, with the aim of ever-so-slightly iterating on existing formulas. Let’s not forget that some of the most iconic references of today took inspiration from the existing competition of yesterday. It’s how we’ve arrived at other modern icons like the Nautilus, the Submariner, the Planet Ocean, the Type XX and the Ingenieur. Ultimately, when watch manufacturers iterate on staid formulas to bring something slightly new to the table, then continue to refine those formulas, we all stand to win. 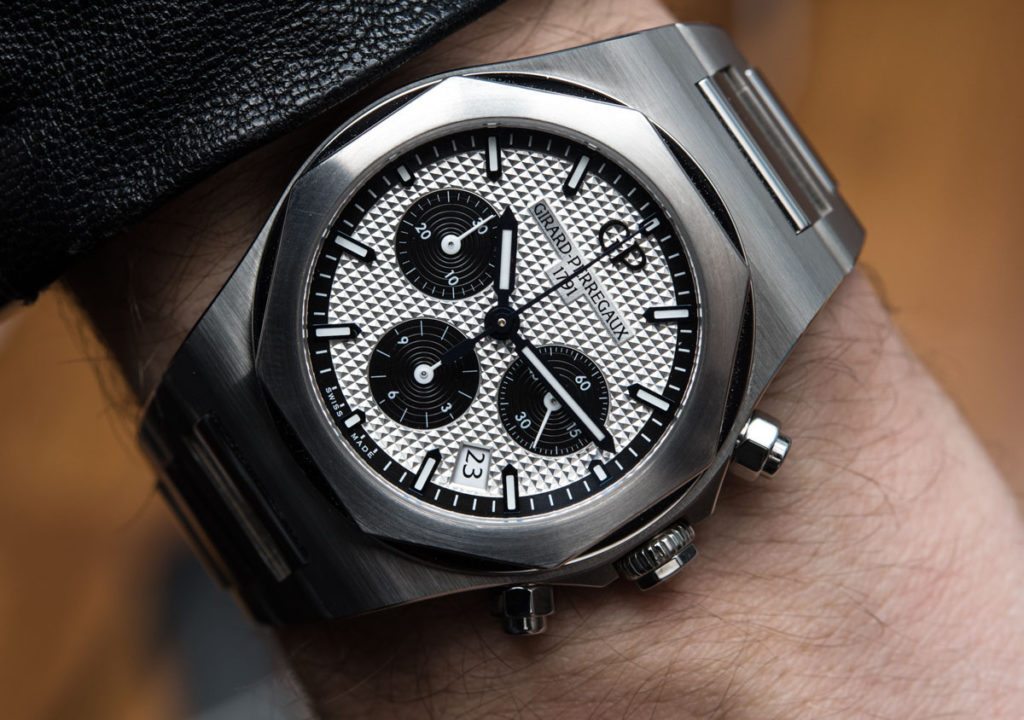 Honorable mention: the Girard Perregaux Laureato is sublime in both three-hand and chronograph form, and readily available without a waitlist.

Before we get any further, it’s probably worth revisiting the somewhat amorphous definition of a “steel sports watch,” which must of course be rendered in non-precious metal (titanium may be admitted here) and is usually characterized by a fixed bezel and enough water resistance to be considered safe for watersports. Purists of the genre might also insist on an integrated bracelet (or at least the prospect of a high-quality bracelet option) and relatively minimalist presentation that slips as easily beneath a cuff as it transitions between casual and formal settings, alike. With this criteria loosely defined, we surveyed our editorial team, who argued over their favorites in the space, as presented and defended below. Naturally, we would love to hear what you would have chosen in the comments, but not until after you’ve read through our picks. So, without further ado, here are the eight winners: 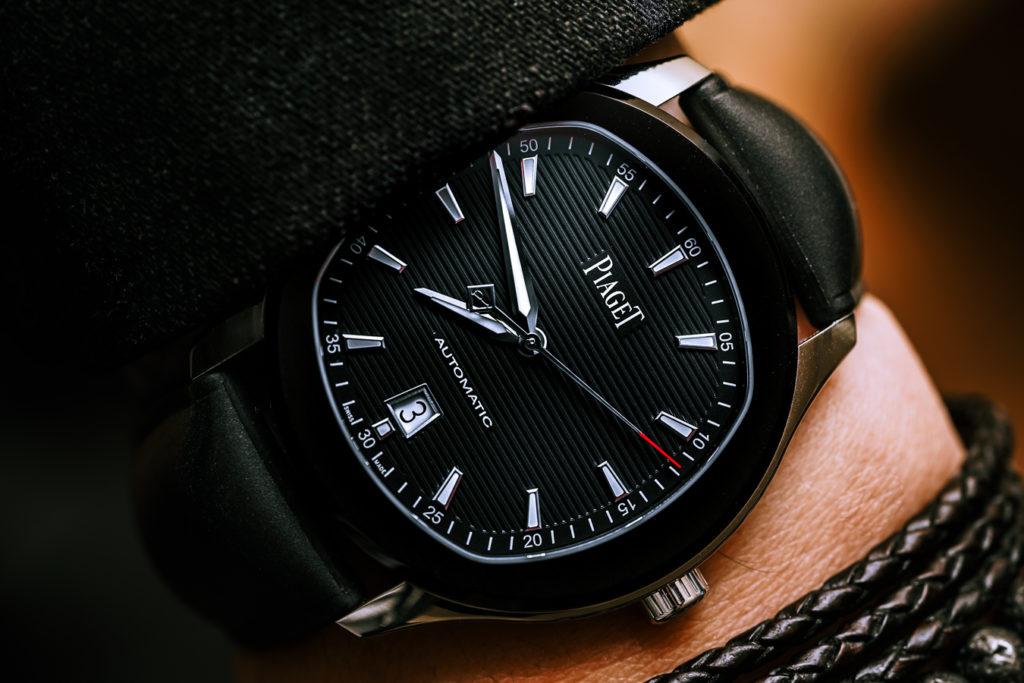 I was initially going back and forth between the Girard Perregaux Laureato Chronograph and the Zenith Defy Classic, based solely on my strong impressions of the latter from Baselworld 2018, but between that time and its launch, the watch underwent some subtle changes that I felt unbalanced the dial enough to return me to my original love, and one of the earlier firestarters in this category: the Piaget Polo S. I’ve written at length before about iconic watches being victims of their own hype, and nowhere is that more evident than how much one could dramatically over-pay for a Patek Phillippe. Thankfully, a quick survey of the competitive landscape reveals a surprising depth of truly beautifully made watches that don’t bear the same burden. The Polo S is one such watch – and to its credit, Piaget got on the train early — long before this year’s glut of “me, too” watches, back when the Nautilus was trading at, or slightly above MSRP, recognizing the growing demand for steel sports watches.

I think the Polo S could have dodged much of the early community ire around its design if it had launched with the ADLC-coated bezel variant pictured here — a reference that delivers a dramatically different wearing experience than any Nautilus or Aquanaut. However, those who bypass such first impressions might recognize the large TV-shaped dial, cushion-style case, and unguarded crown design from a Piaget reference that goes back much further than the Polo: the Emperador, whose design genesis dates even further back — to the original Black Tie, hailing from the height of the 1970s.

To me, this particular Polo reference feels like a genuine effort to add to the conversation. It is effortlessly sexy (as most Piaget watches traditionally are) and markedly sporty, having been in both pool and ocean numerous times without fail. It’s also surprisingly versatile on a wide variety of straps, thanks to one particularly neat detail: the lugs have been drilled twice — one set close to the case for the bracelet or dressy leather straps with curved ends, and another a little further away for thicker rubber straps, or *gasp* pass-through NATOs. And while my pictured LE variant is no longer available, a gorgeous iridescent jade-colored variant was just added to the collection, joining the black, silver, and blue-dialed options — none of which should have a waiting list at your local Piaget dealer.

The Piaget Polo S is competitively priced at $8,100 for the strap version and $9,900 on the bracelet. 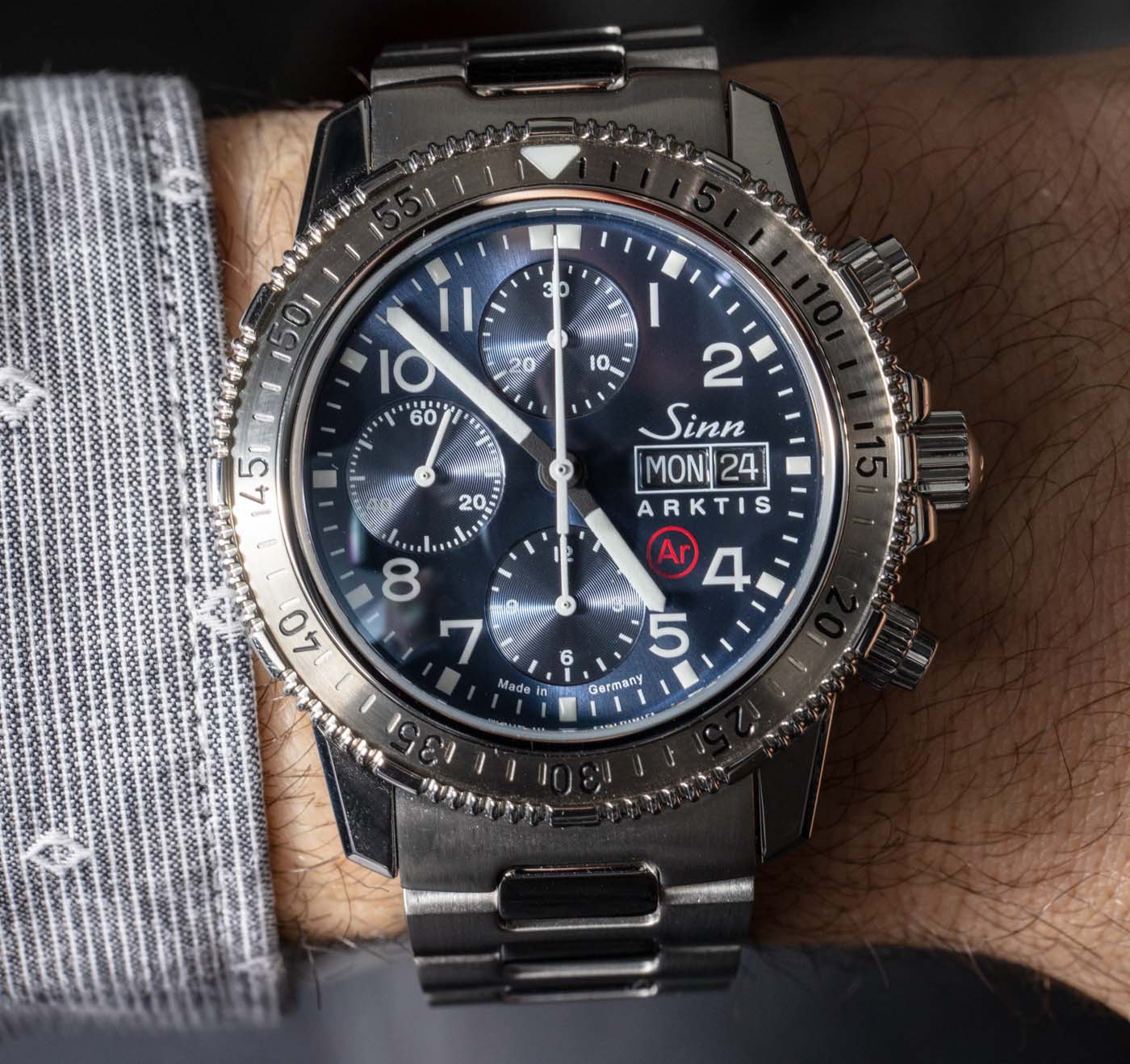 Examine my watch tastes, and you’ll see that I have a clear affinity for steel sports watches on bracelets — especially those you can dress up or down, as desired. So, naturally, choosing just one, or even a few, steel sports watches for this list just wasn’t realistic for me. Two notable references stand out from recent impressions, though, including the Dietrich TC-1, whose modern, avant-garde appeal I found noteworthy in my recent long-term review here. A more traditional, yet also very appealing, option released this year is the Sinn 206 Arktis, available on a matching polished steel bracelet. Built tough and utility-rich like its military timepiece heritage might suggest, the 206 Arktis is an updated on Sinn’s former 203 Arktis, which was released about 20 years ago. Notably, the case size has been increased to 42mm (from 40mm), but all the wonderful beauty, legibility, and excellent build quality remain. This is one of the most attractive conservative tool watches you can get away with wearing fashionably. And with a starting price of around $3,500 on a leather strap, it’s an excellent value to boot. 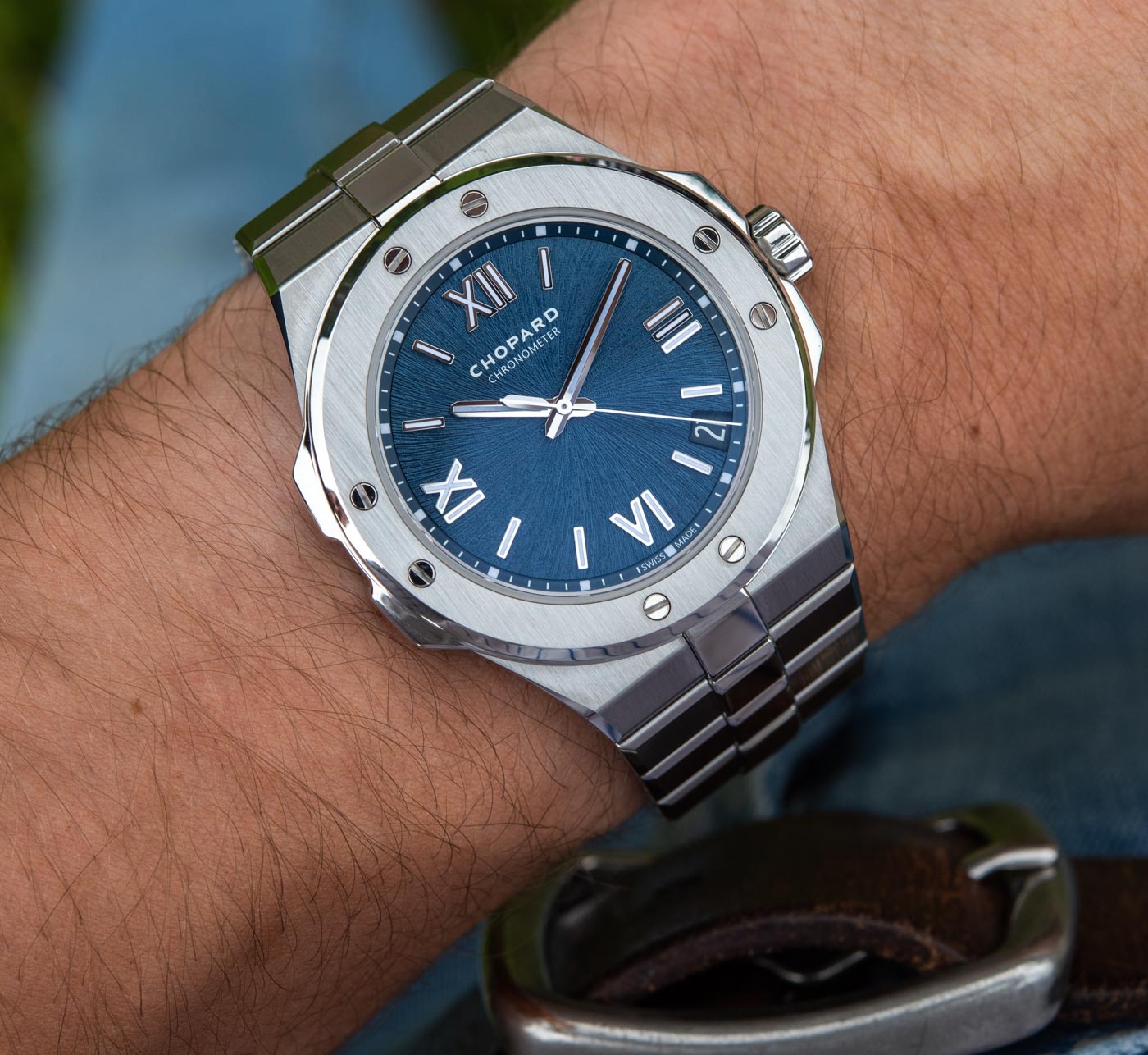 The Chopard Alpine Eagle was introduced to the world only very recently, and it has already caused quite a stir. The competitively conservative, trigger-happy members of the community quickly categorized it as a wanna-be in the luxury steel sports segment. My message to them is that I wish them strength on their 2-5-year Rolex and Patek waiting lists. With the Alpine Eagle, those with a more open mind will find what has to be the best alternative not only to the Rolex steel models but also to the Patek Philippe Nautilus and Aquanaut, as well as the Audemars Piguet Royal Oak. The case and bracelet quality are through the roof, the in-house movement is COSC-certified, it runs for 60 hours at 4 Hertz and looks great — and the watch wears beautifully in its 41mm version. There also is a 36mm variant and, although that will forever be my preferred size of the Rolex Day-Date, the daddy of elegant watches on a bracelet, the Alpine Eagle displays rather more feminine proportions when scaled to 36mm. Priced at $12,900, the all-Lucent Steel Chopard Alpine Eagle isn’t cheap — but its exterior quality, I reckon, is entirely unrivaled at this price. 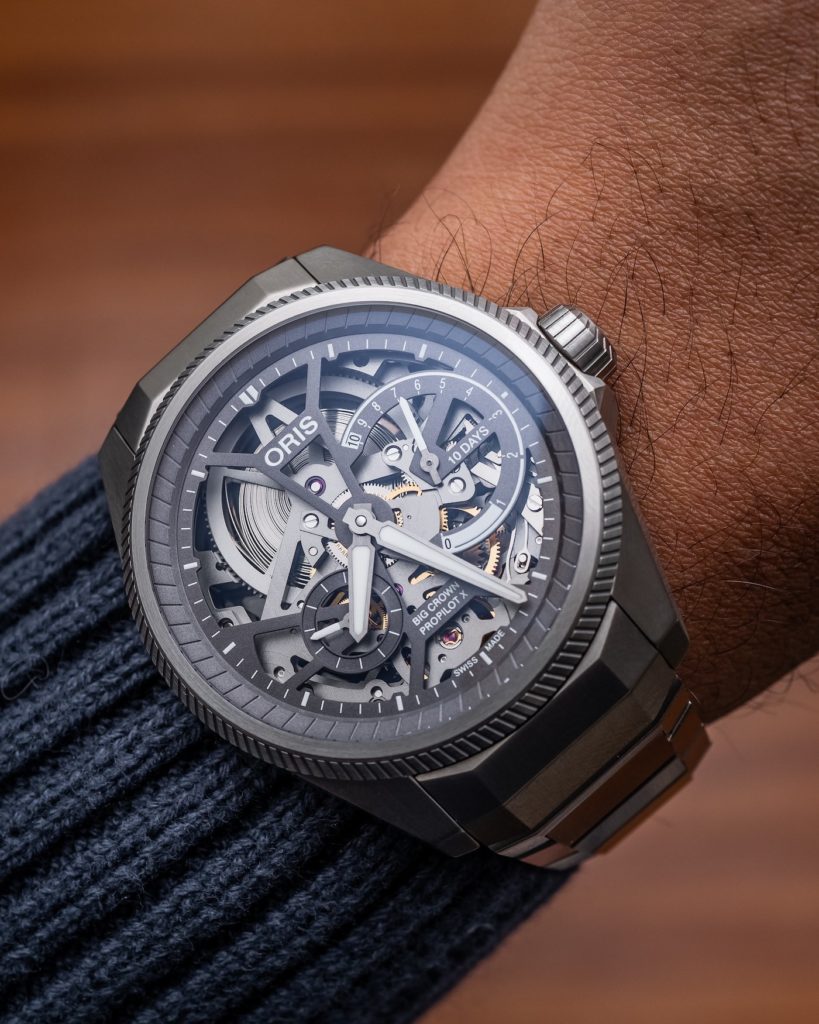 Ok, this is done in titanium, not steel, but take that as an underscoring of my enthusiasm.

Beyond being a truly original new sports watch, the Oris Big Crown ProPilot X Calibre 115 is a case study in how a modern watch brand should move upmarket. Rather than following trends and creating a luxurified version of what’s already in its wheelhouse, or a vintage reissue, Oris created something clearly well-thought-out that’s drastically different from its current lineup. The ProPilot X doesn’t look or feel like anything else on the market, since its angular and architectural design isn’t referencing or reimagining anything. I love the rough finishes that forego typical brushing or polishing, and the deliberate construction around the 10-day power reserve Calibre 115 movement defies the mediocrity most “skeletonized” watches exhibit.

The matching titanium bracelet is a must, for me, though I know it is available on a leather strap. Frankly, the Oris Big Crown ProPilot X Calibre 115 needs to be handled physically to be appreciated and is worth every single penny of its $7,600 price.