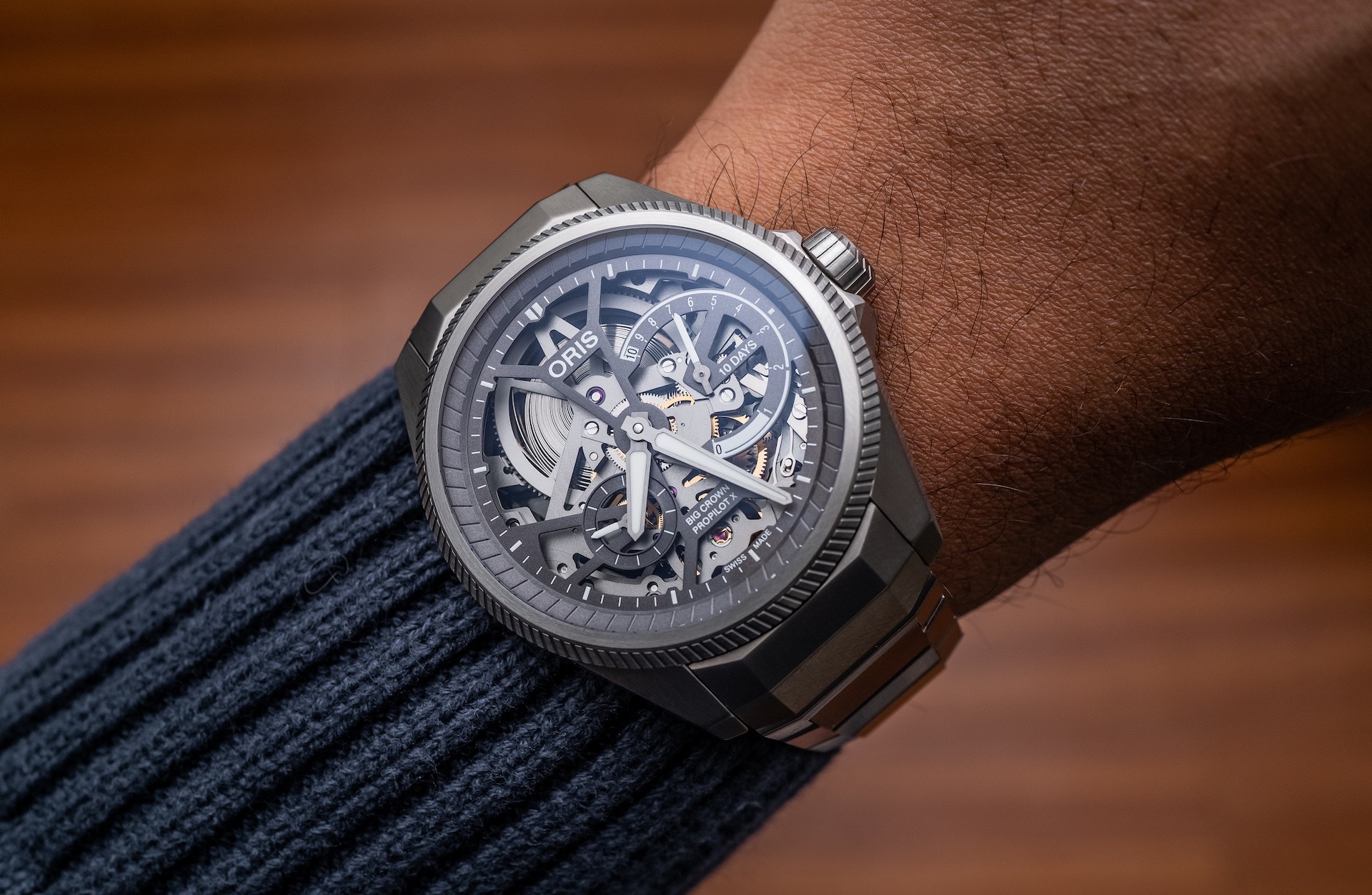 I’ve always appreciated Oris, having handled or worn most of its offerings at some point or another in my nearly five years of being in watch media. However, none of its watches captured my attention enough to compel me to do a review or hands-on. That’s been for no reason beyond the fact that there are so many quality watch journalists at aBlogtoWatch and peer outlets that are such big fans of the brand and have a lot more to say about it. The brand that’s been an increasingly dominant player in the ~$2,000 vintage-inspired tool watch space releasing a quasi-futuristic looking $7,200 titanium watch named ProPilot that isn’t really a pilot’s watch at all? The concept itself would be ridiculous if the Oris Big Crown ProPilot X Calibre 115 wasn’t executed so damn well. 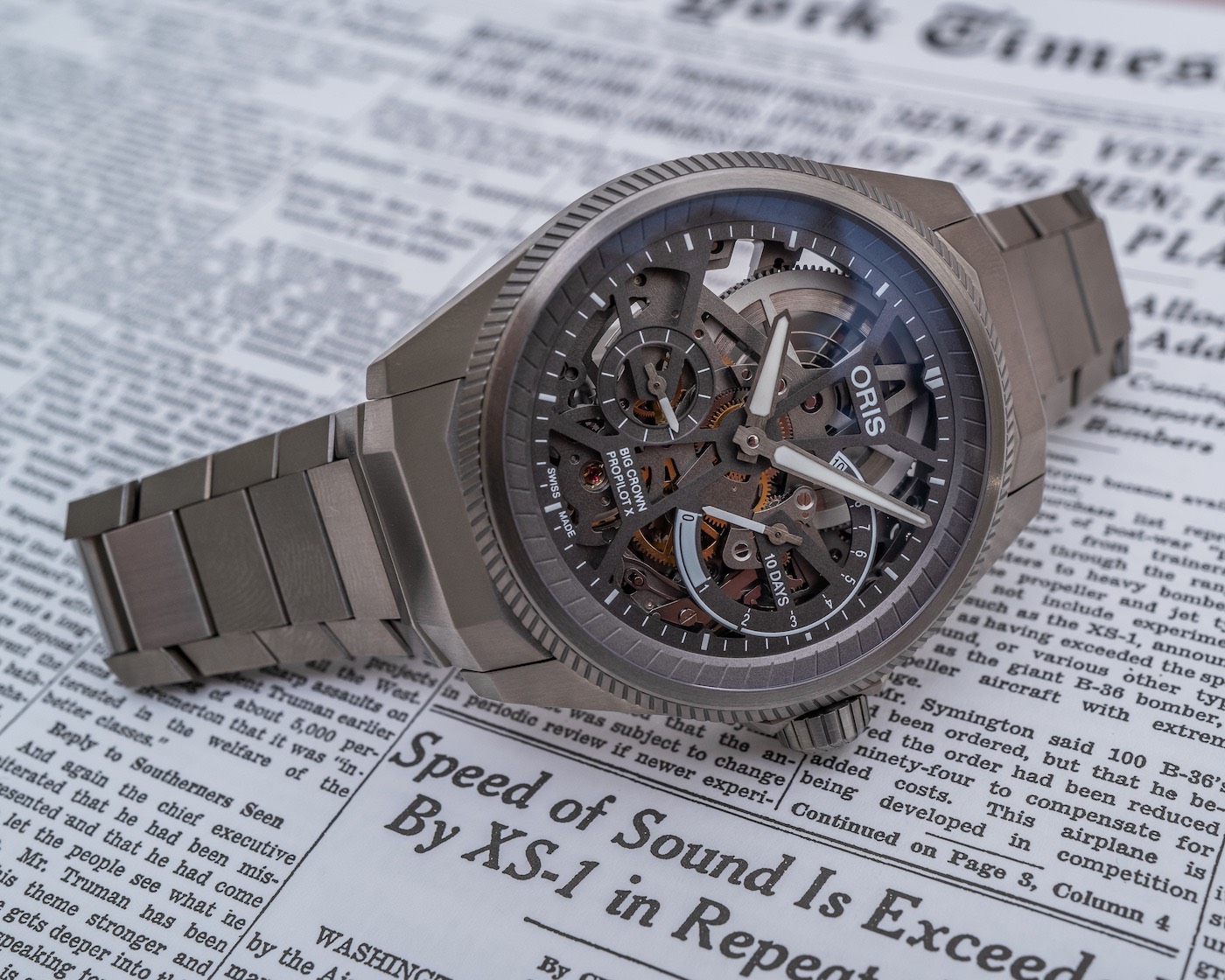 Last week the aBlogtoWatch editorial team did a roundup of our favorite steel sports watches without a waitlist. I really did have a few longstanding choices in mind that deserved the spot as much as any other, but I don’t think anyone was more surprised than I was when I submitted a titanium open-worked watch. Here’s what I had to say in that context:

“Beyond being a truly original new sports watch, the Oris Big Crown ProPilot X Calibre 115 is a case study in how a modern watch brand should move upmarket. Rather than following trends and creating a luxurified version of what’s already in their wheelhouse or a vintage reissue, Oris created something clearly well thought out that’s drastically different from their current lineup. The ProPilot X doesn’t look or feel like anything else on the market, since its angular and architectural design isn’t referencing or reimagining anything. I love the rough finishes that forego typical brushing or polishing, and the deliberate construction around the 10-day power reserve Calibre 115 movement defies the mediocrity most ‘skeletonized’ watches exhibit.” 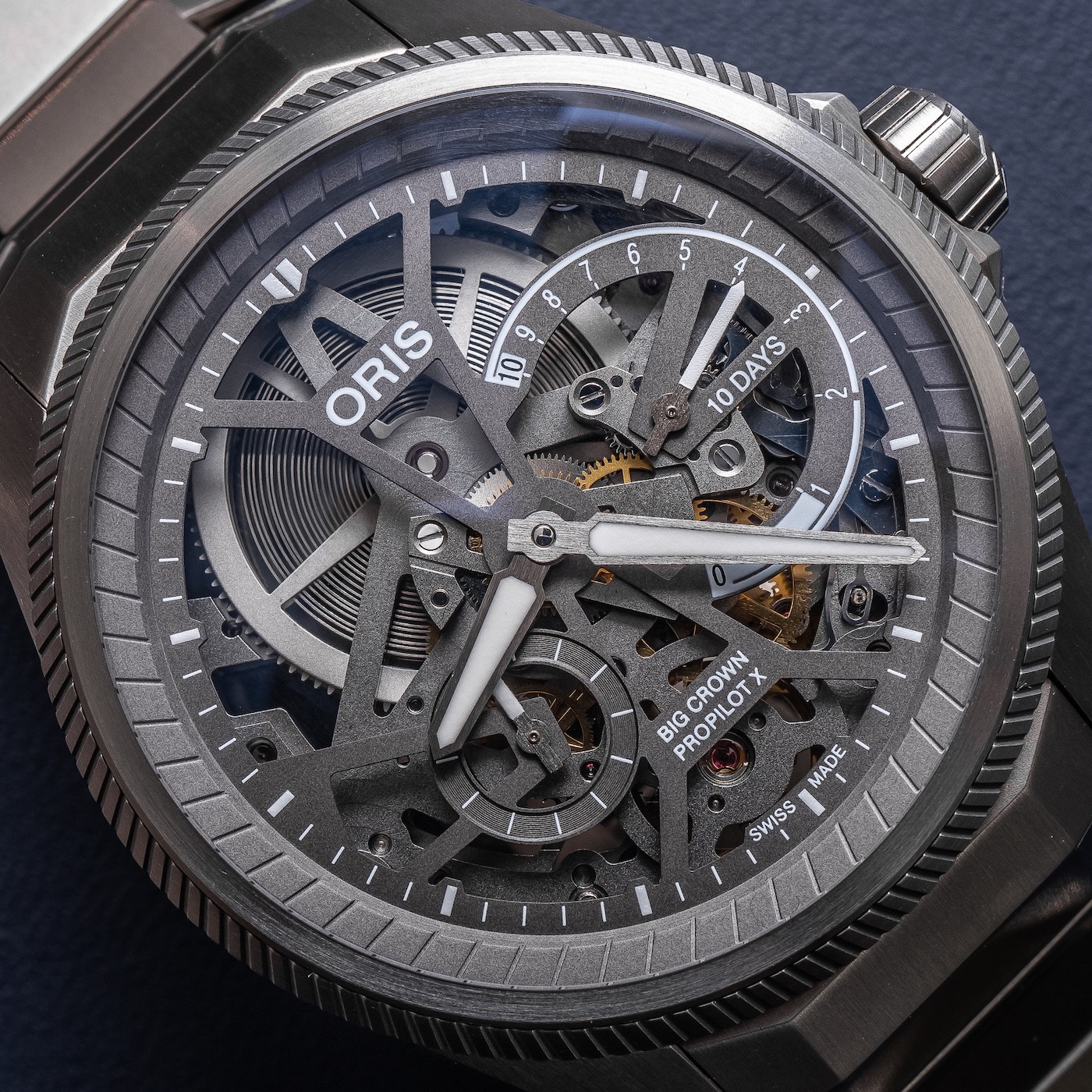 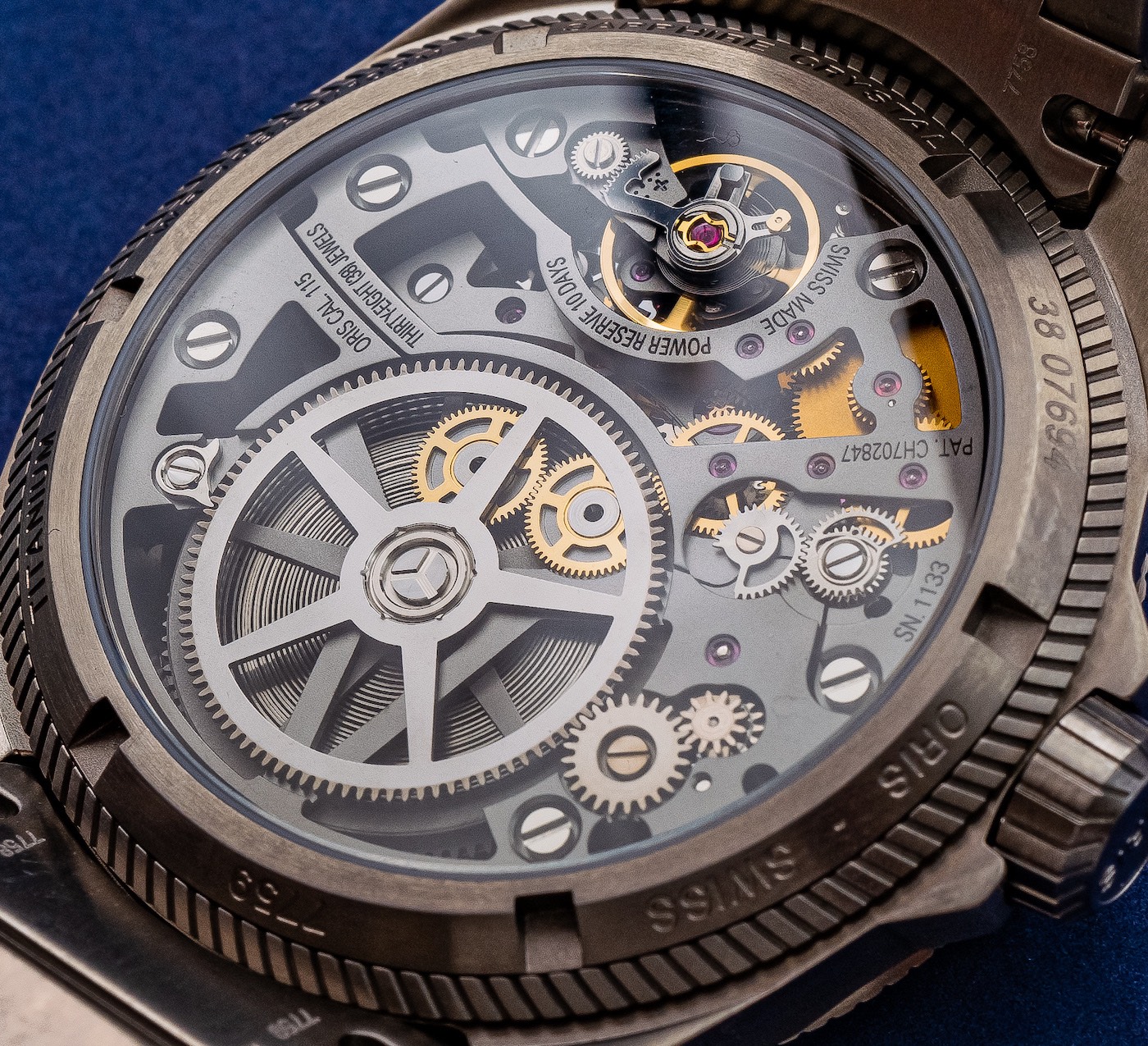 The ProPilot X and the in-house Calibre 115 work hand-in-glove as the case of the watch was designed and built around the movement itself. The manual-wind Calibre 115 is left mostly galvanized and in varying shades of gray with gears breaking it up here and there. Really, the entire point of having this open-worked movement is to show off that barrel and mainspring at 12 o’clock. As the mainspring unwinds, the non-linear power-reserve indicator gradually moves downward past the unevenly spaced days. The lower the power reserve gets, the more space those days get on the indicator. It’s neat to consider that the rate of speed of the power reserve hand changes. Though the Calibre 115 has a 10-day power reserve, it can run for up to a couple of days beyond that number, albeit with notably compromised accuracy. 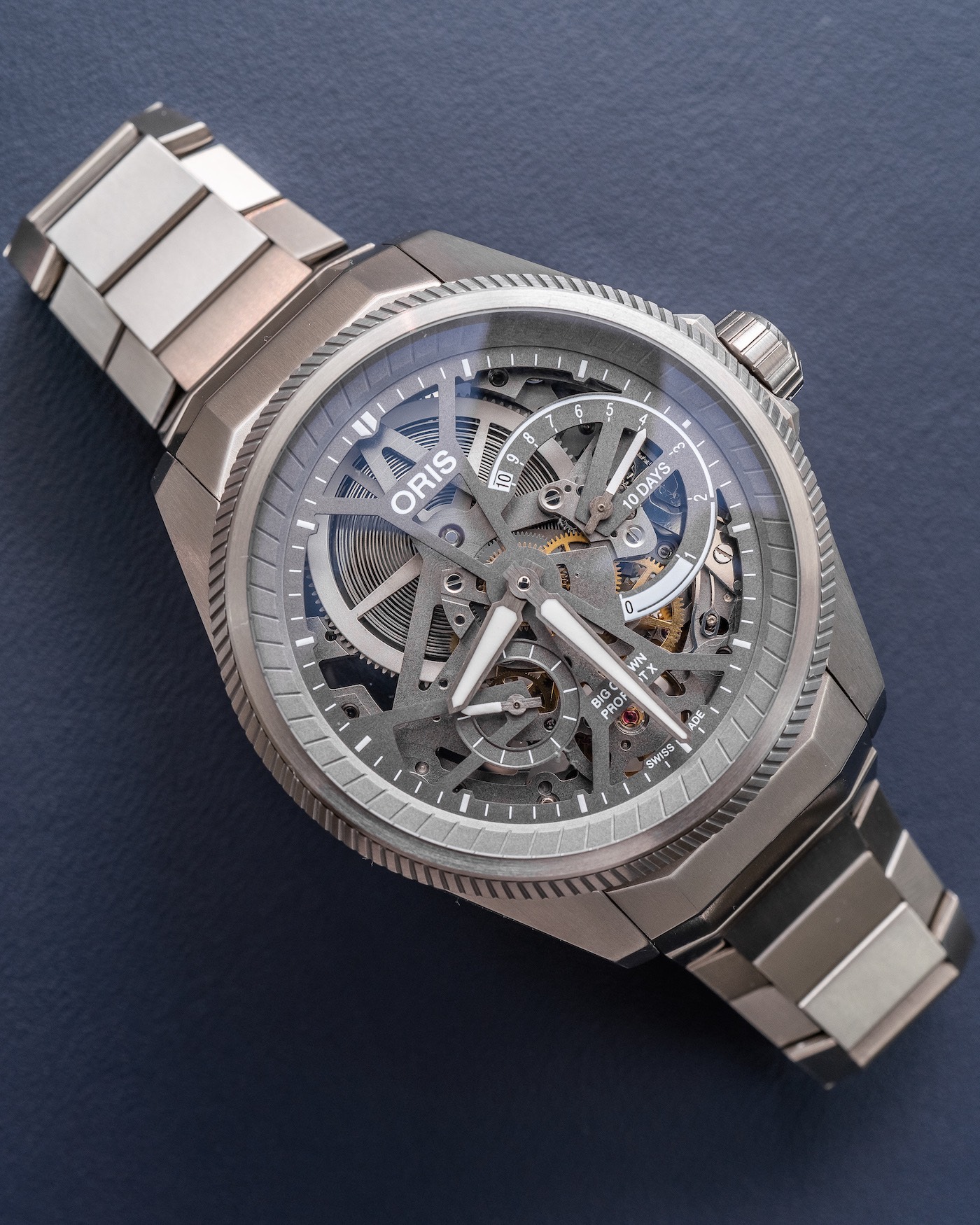 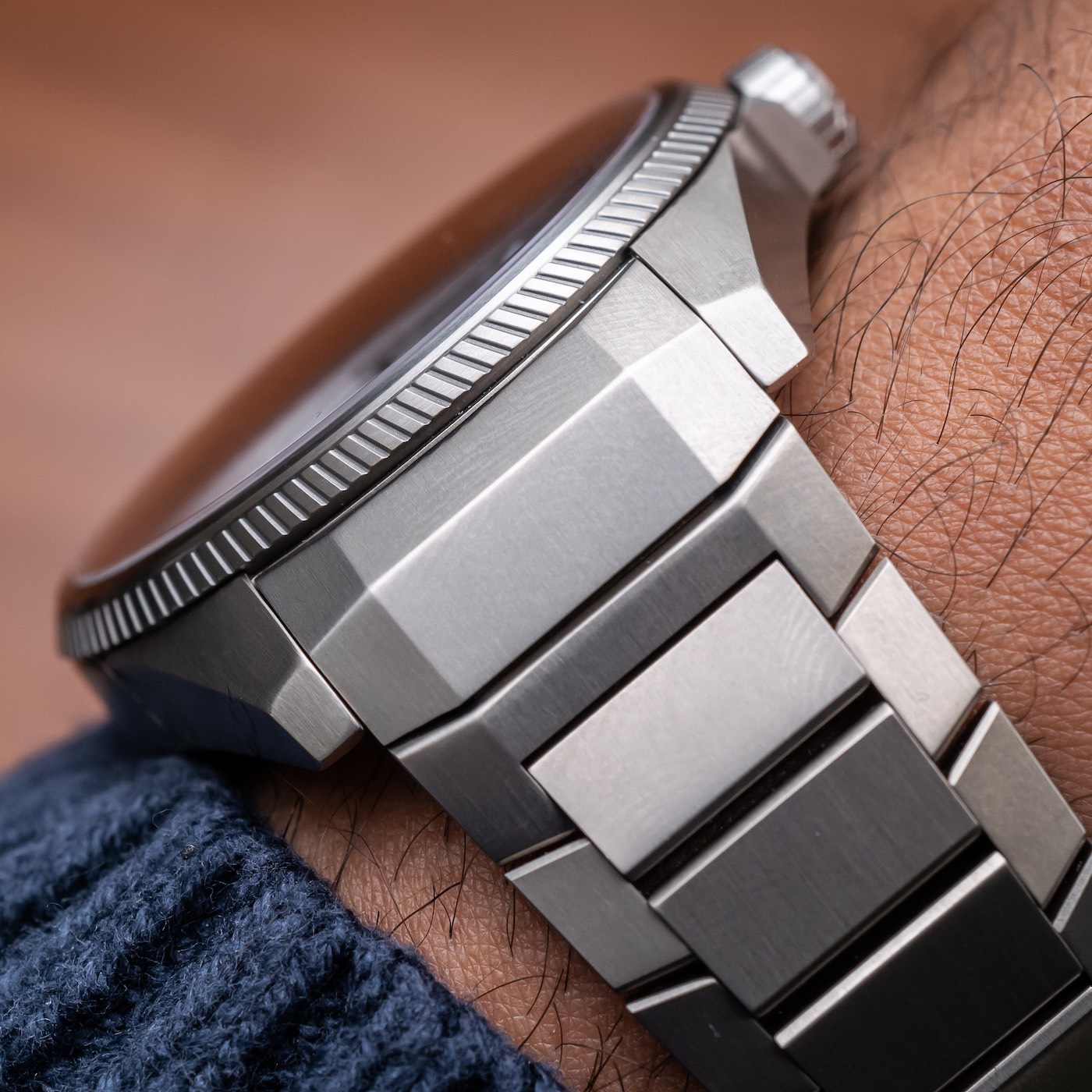 How a watch looks always informs my subconscious mind of how much it should weigh, even if I know that it’s done in something as lightweight as titanium. This was, once again, the jarring case with the Oris Big Crown ProPilot X when I put it on my wrist. The watch looks like a solid, angularly carved piece of metal that feels like a well-balanced assortment of feathers on the wrist. The ProPilot X measures 44m-wide, just around 12.6mm-thick, and has a 50mm lug-to-lug measurement. I know people are lamenting that it’s not 42mm-wide, but the lug-to-lug is pretty reasonable and keeps things tasteful with size. 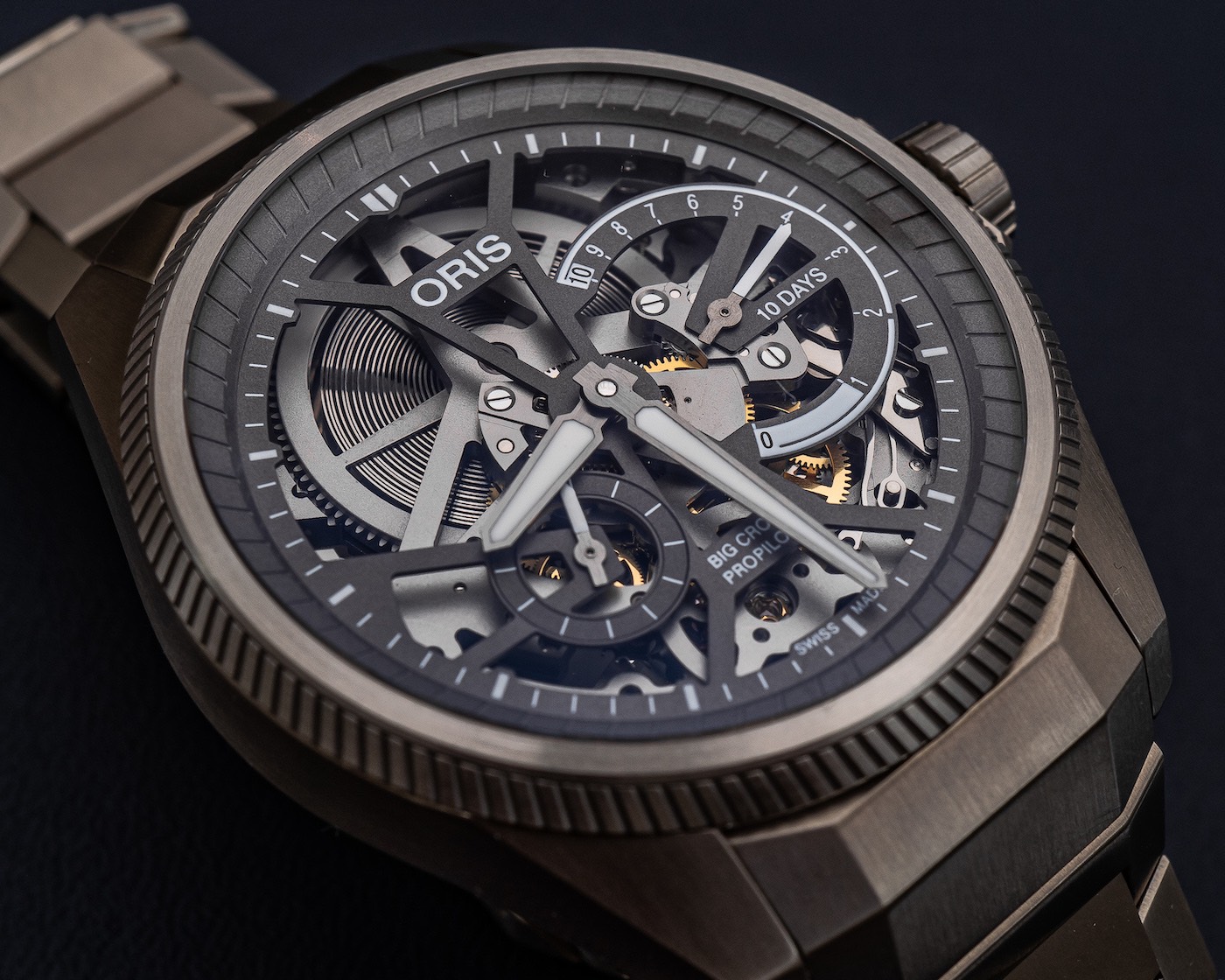 The bezel does some work in reminding us that this watch is in the Big Crown ProPilot family and is inspired by aviation, at least in theory. The turbine inspired pattern on the bezel is nice enough with the chapter ring and crown echoing similar designs, though differently done. That’s really as far as the watch goes in any case embellishments or decor, which is fine for me because the bracelet ties with the movement as a selling point. 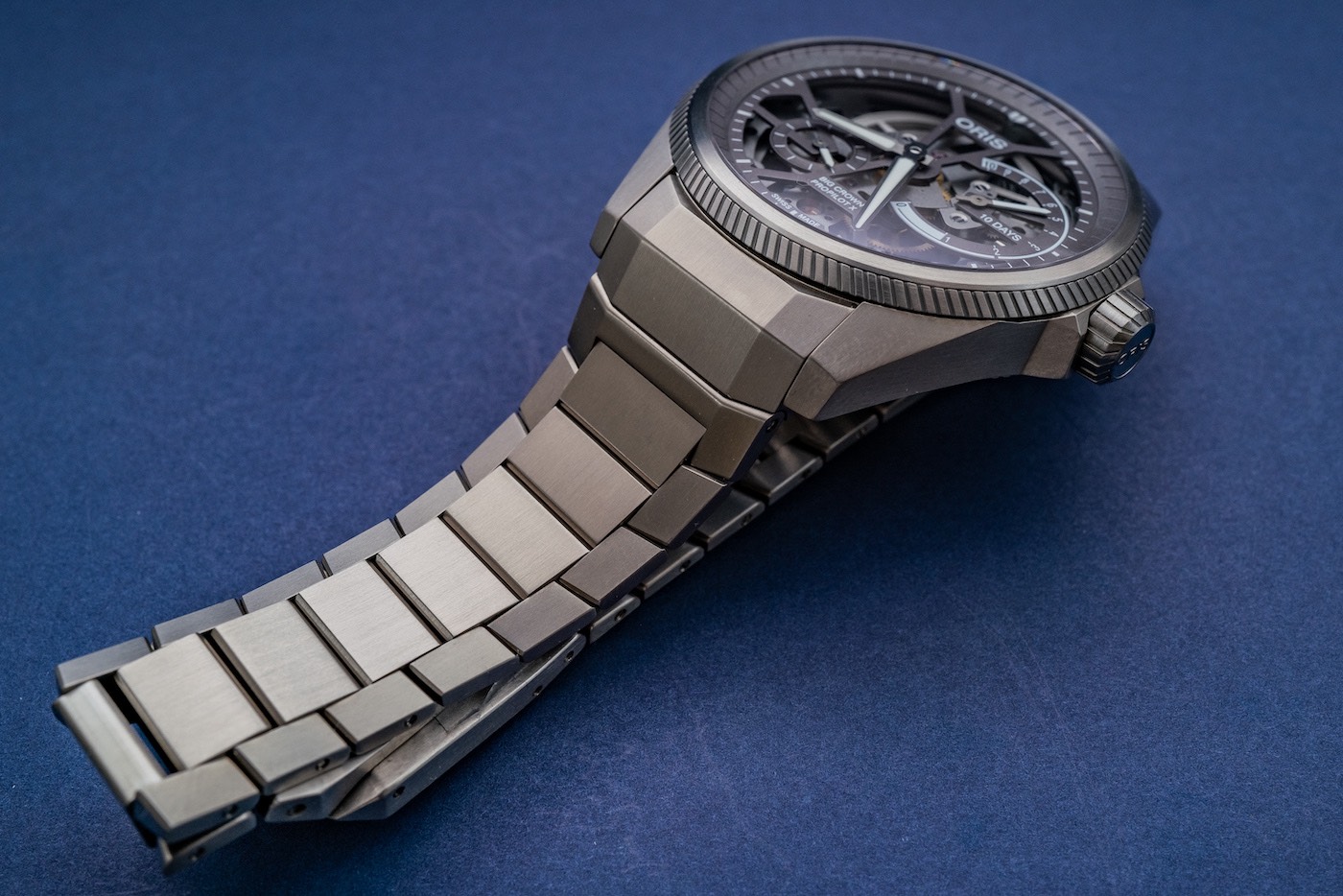 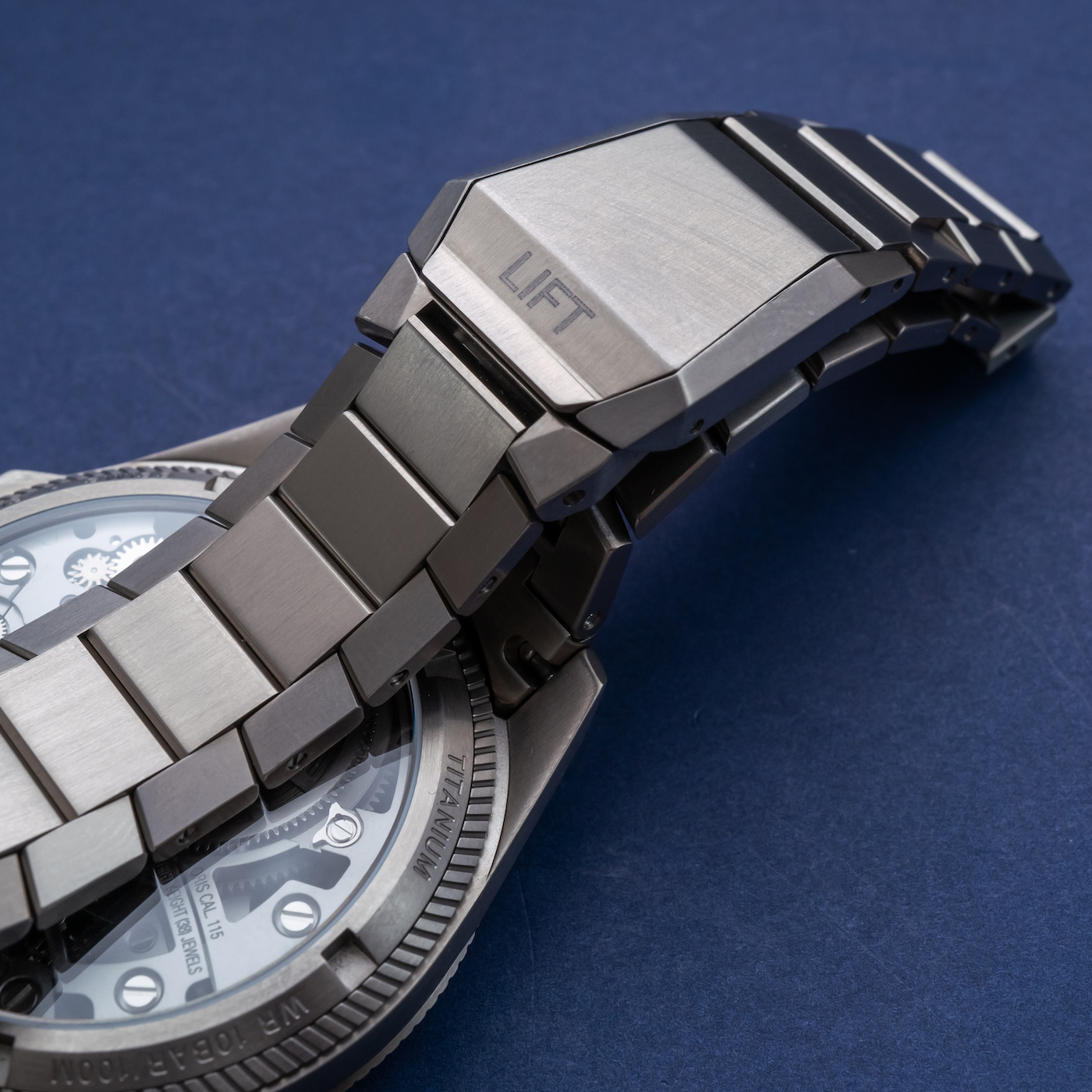 To be honest, I was surprised when I saw that the ProPilot X is also available on a leather strap, considering how instrumental the bracelet seems to its identity. That said, Oris might have done well to avail itself of being pigeonholed into the “another integrated bracelet” club. Still, the way lugs and endlinks angle downwards and then plummet down sharply frames the case nicely but also increases the wearing comfort. The bracelet is really comfortable on the wrist and it also makes the watch sit on the wrist in a way that’s noticeably secure. Does the clasp really need to say “lift?” No, not really. Is it easy to use and does it feel highly secure on the wrist? Yes.

Overall, the bracelet is more impressive than the sum of its parts because it’s clear that it was designed for this particular watch in mind. A business that has to answer to a board with shareholders may not feel inclined to invest the time and energy in a product that is so different from its bread and butter offerings, but that holistic approach to the design of the ProPilot X is why it succeeds. 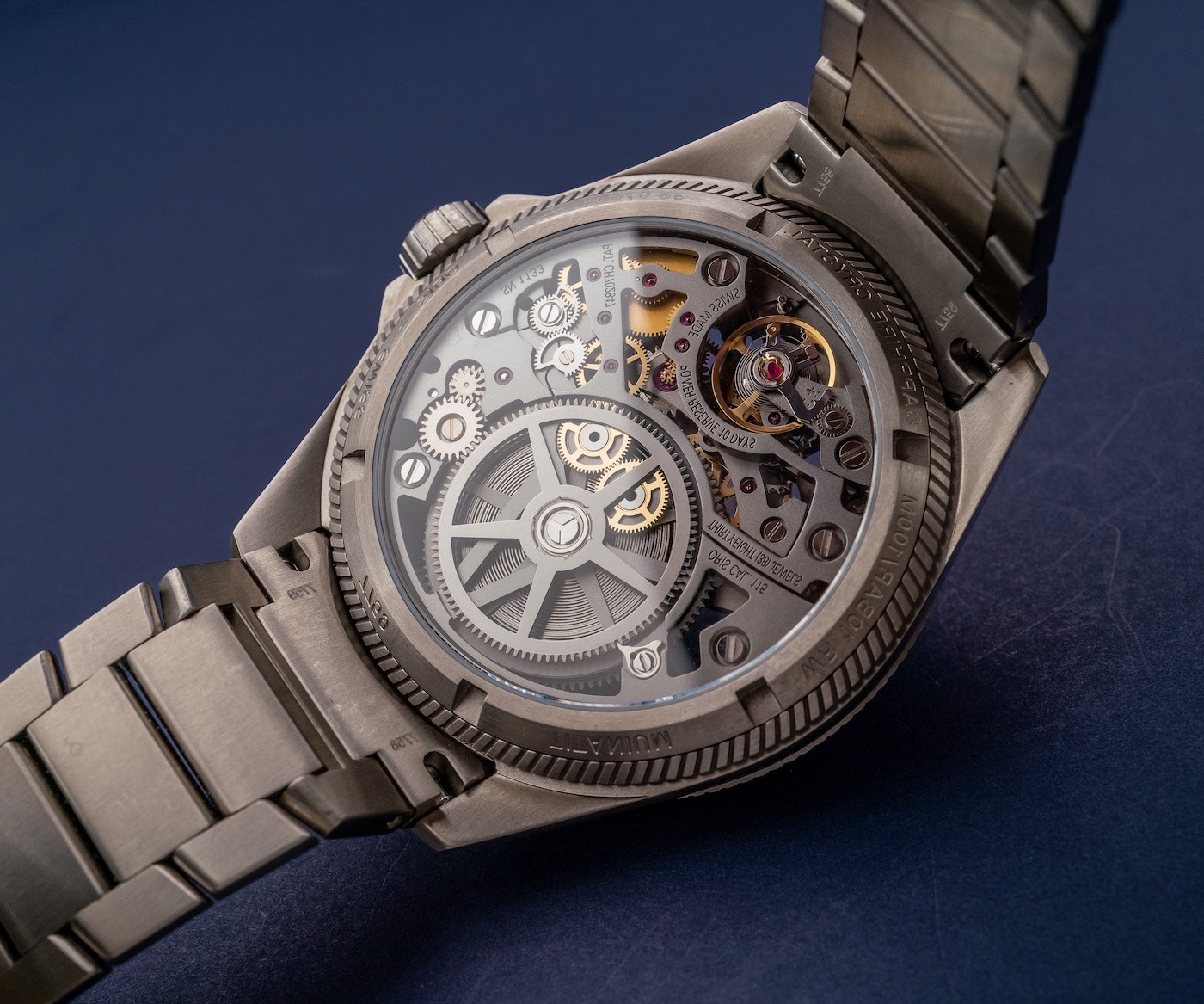 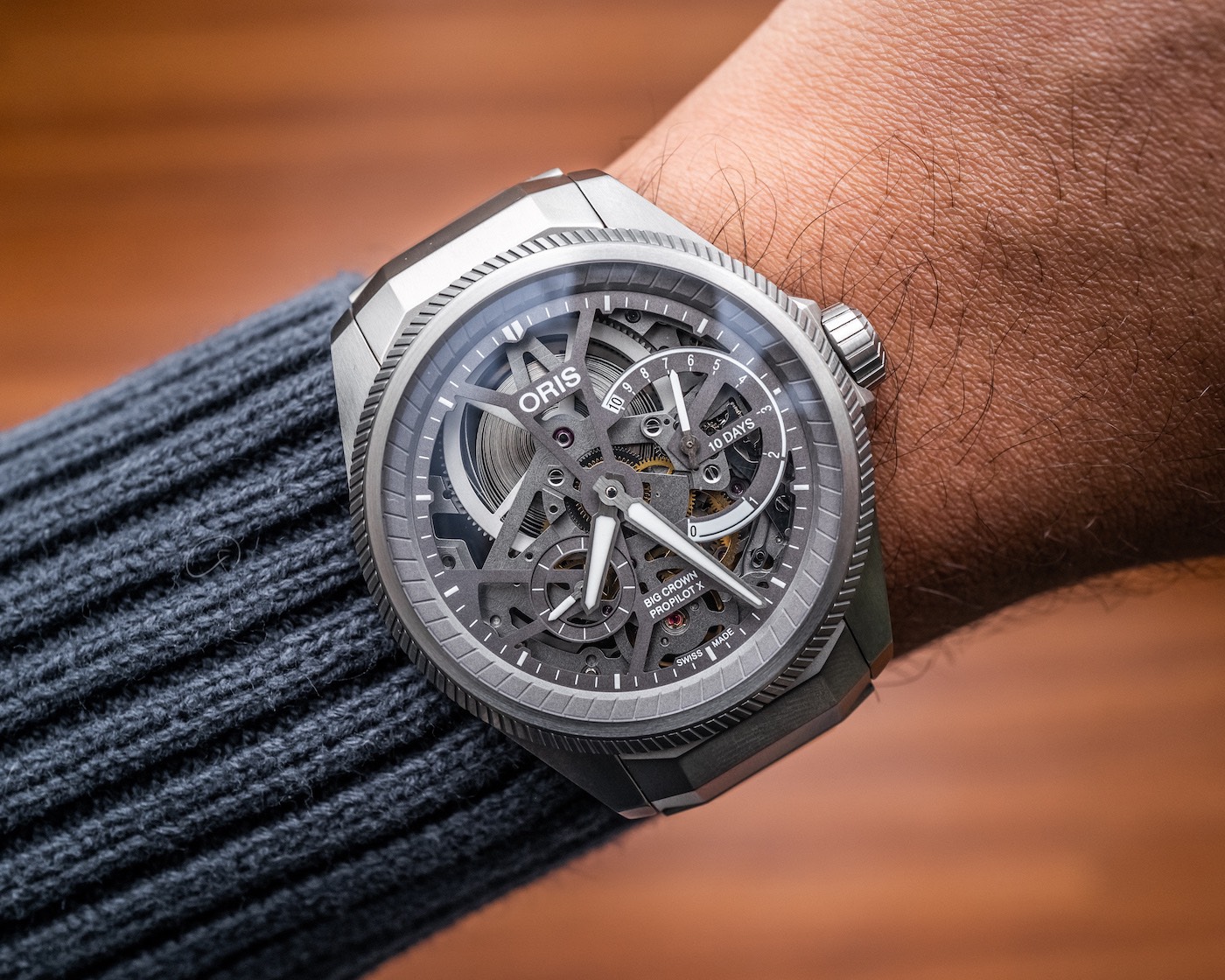 In a world where it can seem like watch brands operate like movie studios and release the same IP over and over ad nauseam, it’s so refreshing to see something new and out of one’s comfort zone (even if it somewhat quizzically shares a name with an existing collection). The Oris Big Crown ProPilot X is priced at $7,200 on leather strap and $7,600 on titanium bracelet. You can learn more at oris.ch.