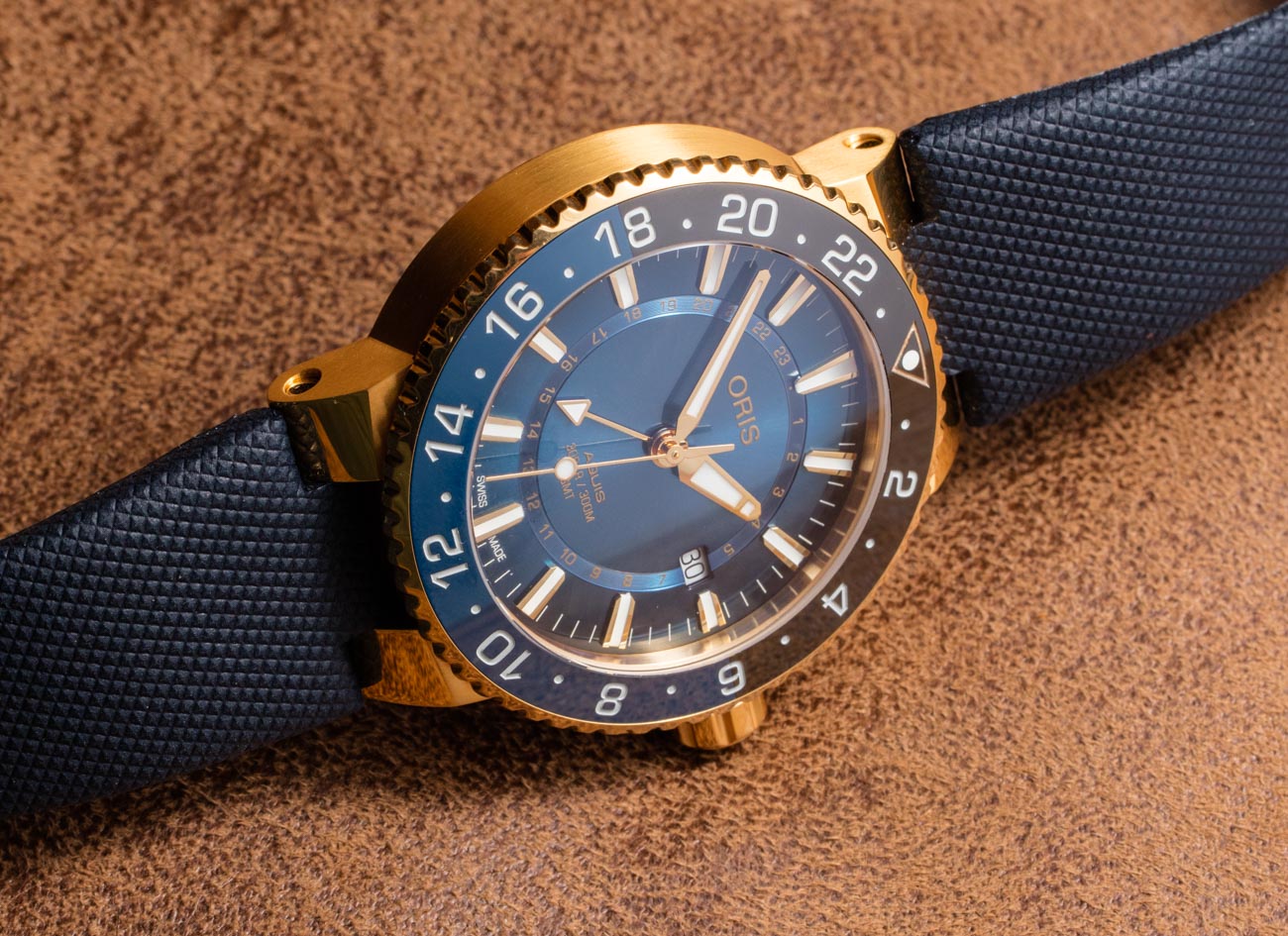 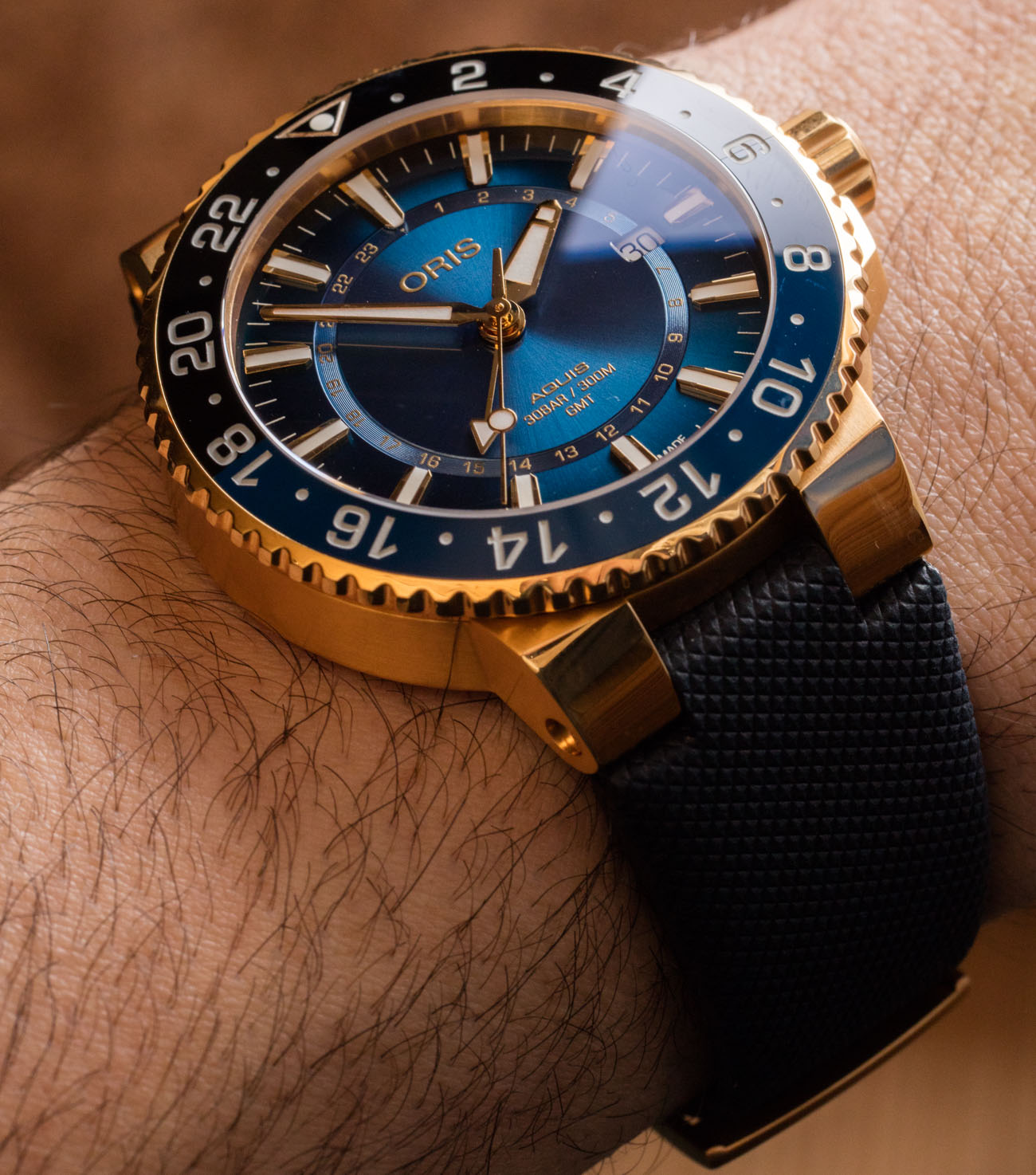 Swiss Oris watches recently debuted a new limited-edition diver’s watch that is its first dive watch in solid gold, and the second timepiece produced in collaboration with the Coral Restoration Foundation charity organization (based in Key Largo, Florida). For the brand that markets itself as making “real watches for real people,” producing a solid gold watch is, admittedly, a bit out of character. Why a gold watch, and why now? In short, so that more sales proceeds can go toward the honorable marine preservation organization.

For example, three out of the 50 Oris Craysfort Reef Limited-Edition Reference 01 798 7754 6185 will simply be given to the Coral Restoration Foundation to auction off on its own, the entire proceeds of which will go to the foundation. In addition, my understanding is that part of the sale of all the Craysfort Reef Limited-Edition watches will be given to the charity foundation. 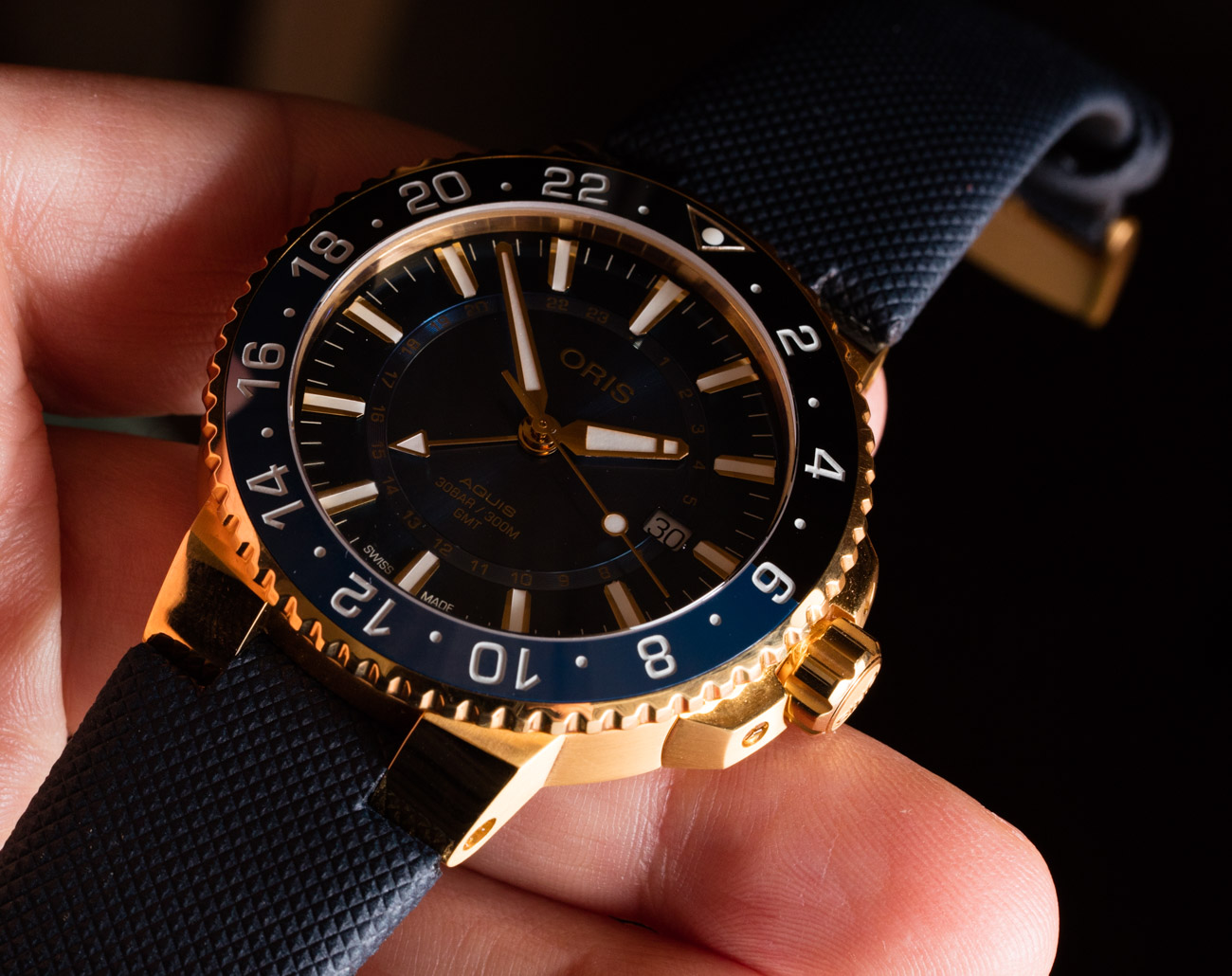 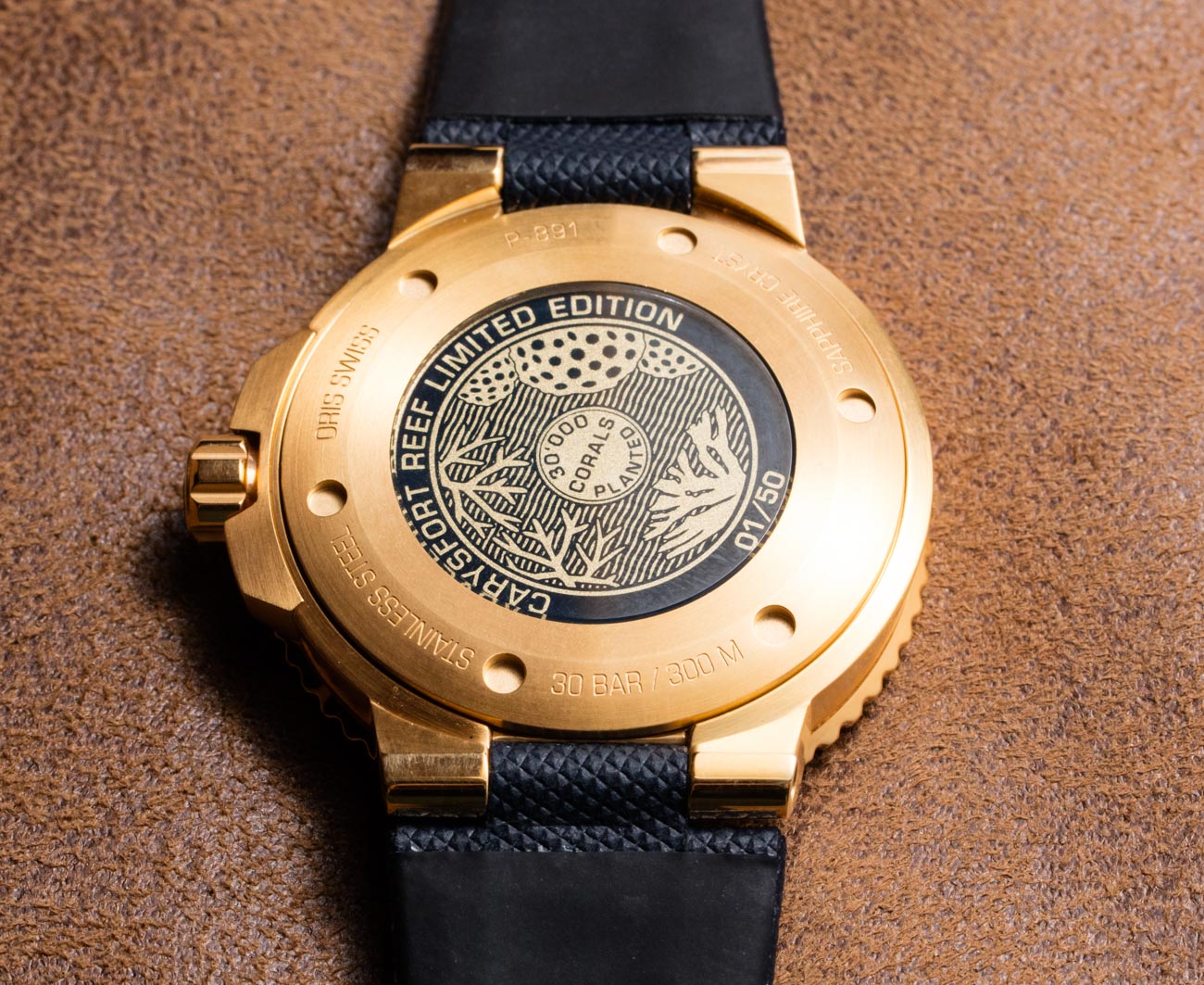 What does the Coral Restoration Foundation actually do? To answer this question, I had spoke directly with Martha Roesler, the Chief Development Officer of the Coral Restoration Foundation. In essence, they work to grow and introduce coral species to former or diminishing reefs where corals have died due to a series of factors, including pollution, human construction projects, and climate change. The foundation runs a special coral farm where a variety of endemic coral species are grown (Staghorn coral, for example, which was the subject of the first limited-edition watch Oris created in honor of the Foundation), and then later carefully moved and positioned on rocks where they can attach themselves and grow to maturity. 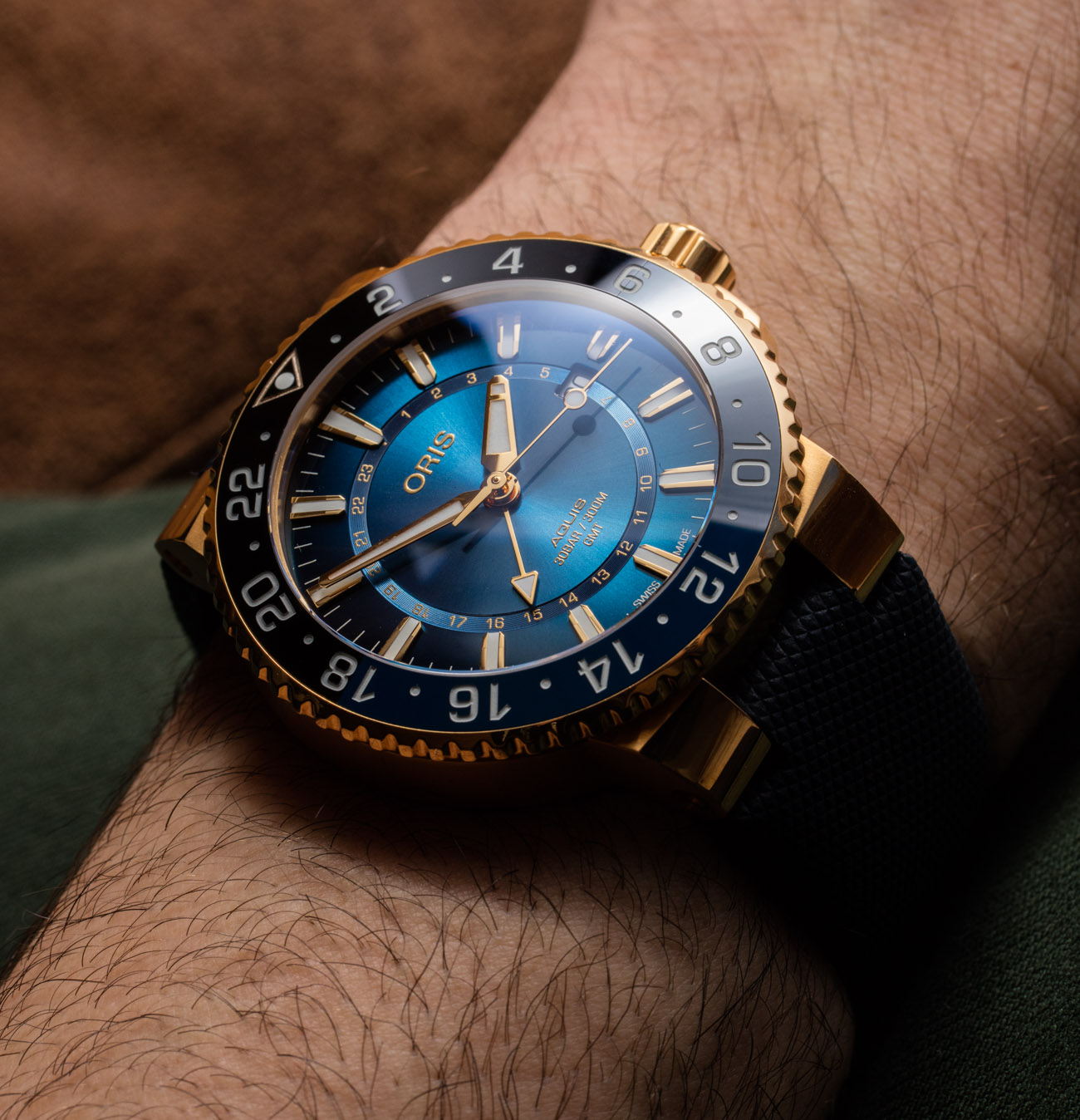 The Coral Reef Foundation has a lot of pictures and videos that show “before and after” success stories demonstrating how coral reef restoration efforts are working. Reintroducing coral to the Craysfort Reef and other areas is important for a few reasons. One of the major beneficiaries and contributors is tourism. In addition to supporters such as Oris, tourism is a major reason coral restoration projects are able to be funded. Divers and snorkelers prefer to swim where there are coral reefs, and if that is what it takes to get funding to restore the reefs, then so be it.

Corals are also the backbone of reef ecologies. Corals provide safe homes to numerous fish and invertebrate species that would be quickly eaten by predators without the corals for hiding spaces. As a company (and perhaps because they produce so many diver’s watches), Oris has been deeply involved with a series of reef conservation efforts around the world. The Coral Restoration Foundation is merely one of the most important such partners. 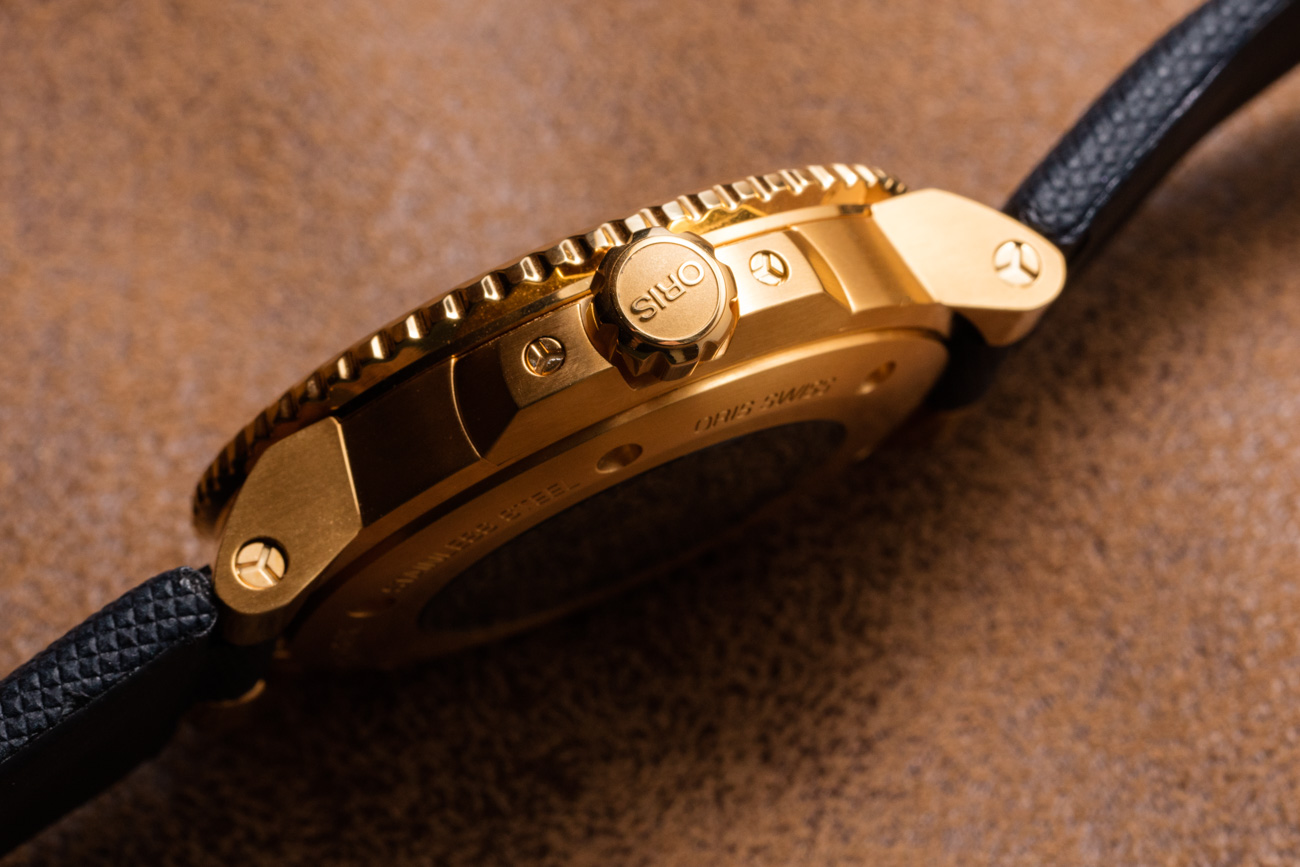 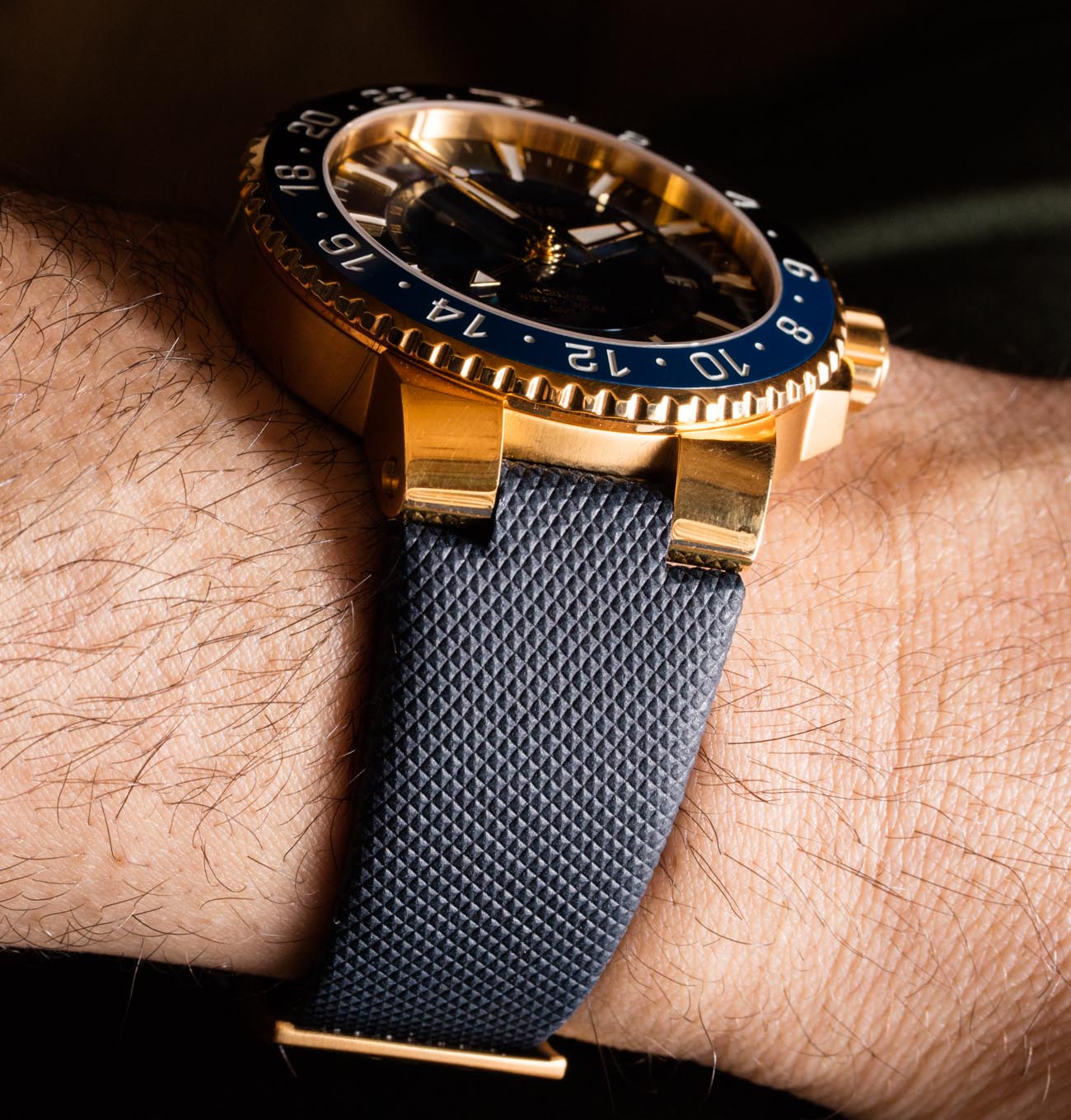 So what of the solid gold diver’s watch itself? Note that Oris has officially mentioned that a steel-cased version of the Carysfort Reef Limited-Edition watch will be available later in 2020. For now the attention is on the reference 01 798 7754 6185 with its 18k yellow gold case. Upon seeing it in person, it is natural to immediately think about other solid gold diver’s style watches from brands like Rolex or Blancpain. Oris certainly beats them both when it comes to value — even though this is not what we’d call a budget-priced timepiece.

Aside from having an 18k yellow gold case, bezel, crown, and buckle, everything else about this Aquis collection product is pure “tool watch.” The 43.5mm-wide case is water resistant to 300 meters and is fully functional as a legitimate diver’s timepiece. The bi-directional rotating ceramic bezel (24 hour markers on it, as this is a GMT watch) also has split blue and black colors similar to the popular Rolex GMT-Master II “Batman” watch. The watch dial is an attractive metallic blue with a sunburst-style finishing. 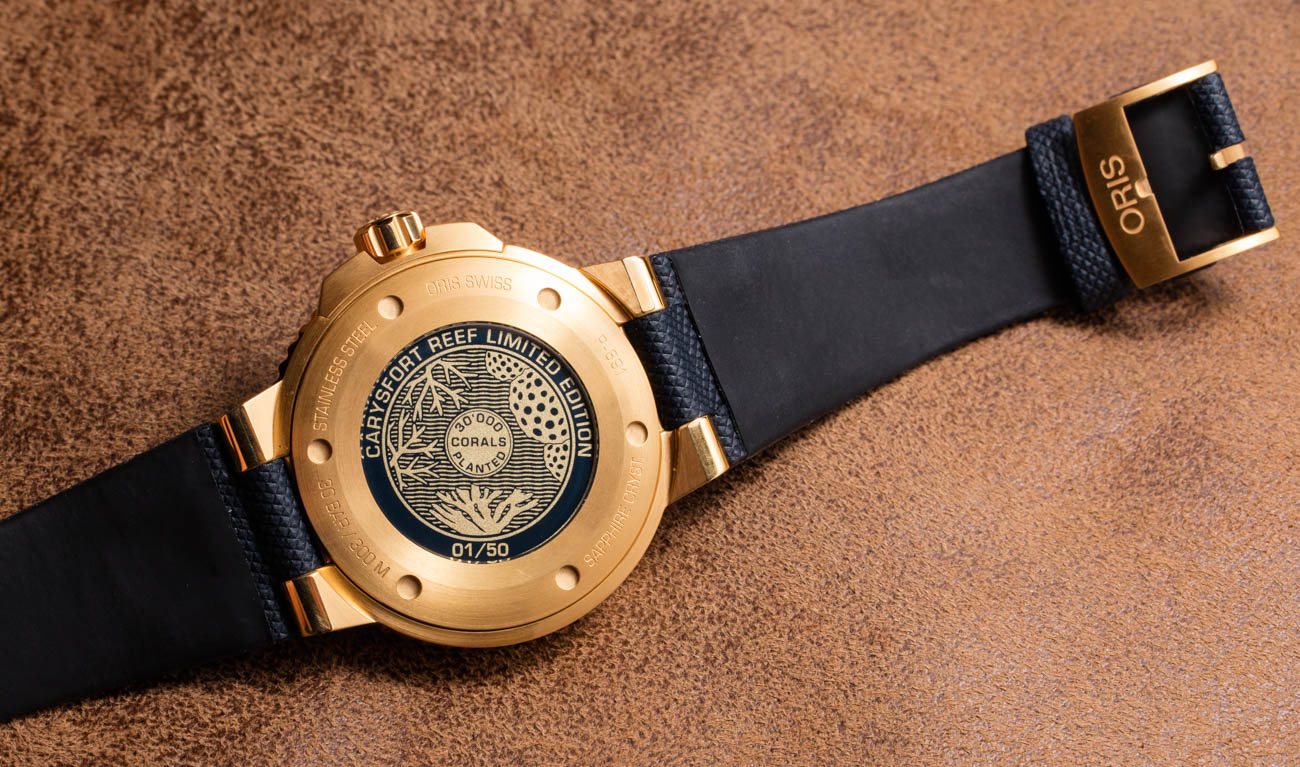 On the rear of the watch, and under a protective sapphire crystal, is a small plaque that commemorates the relationship with the Coral Restoration Foundation. Attached to the case is a rubber-coated blue leather strap that is both water resistant and quite comfortable. If you are in the mood for a solid yellow gold watch, you’d really be silly to pass this one up.

Inside the watch is a Swiss-made base Sellita SW330-1 automatic GMT movement (Oris calls it the caliber 798). It includes the time, date, and a 24-hour GMT hand for a second time zone. Given that there is both a 24-hour display on the dial and on the bezel, you can technically use the bezel to track a third time zone. The movement operates at 4Hz with 42 hours of power reserve. 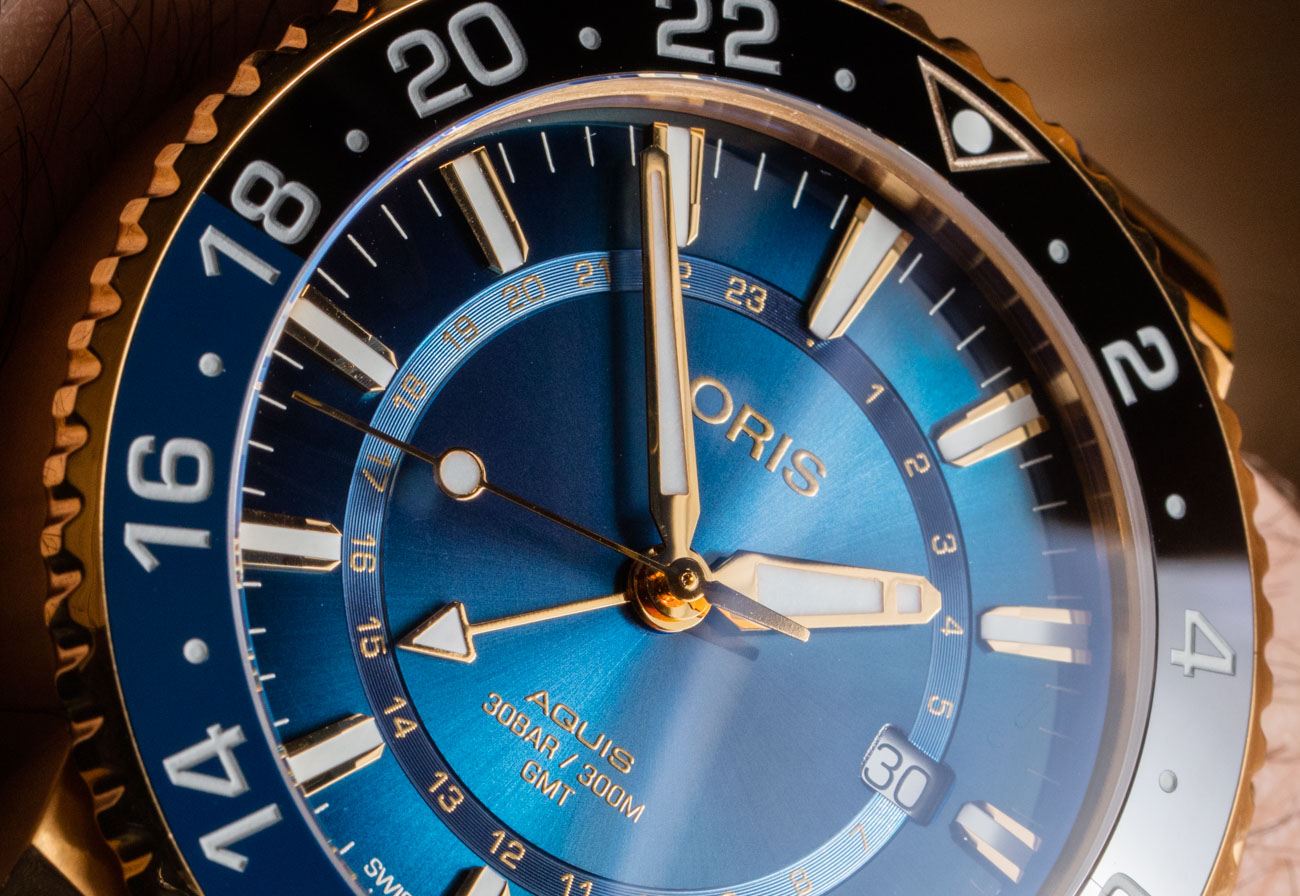 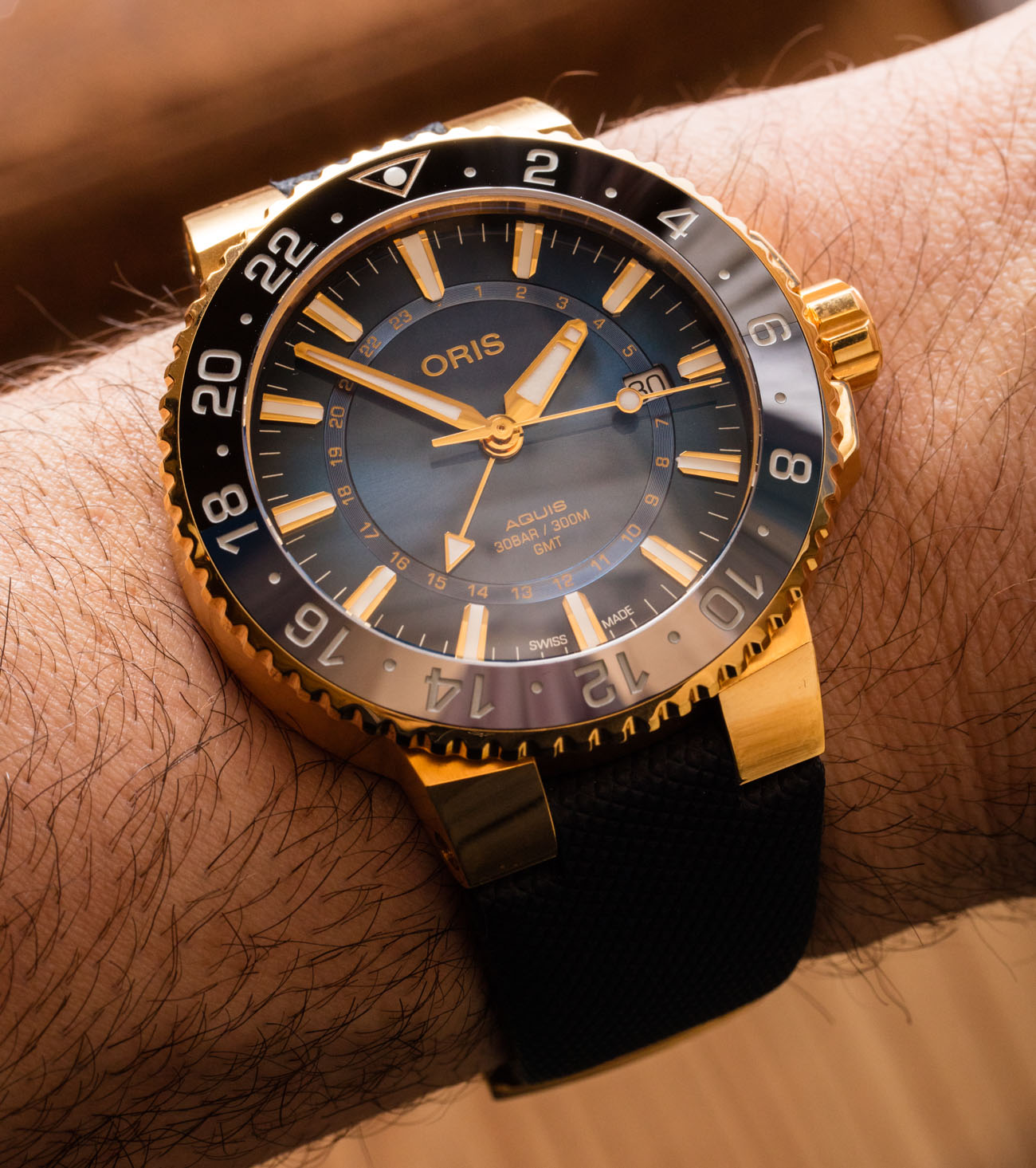 Most Oris customers are working class people who want a good quality mechanical watch from a respected Swiss brand at a fair price. They probably aren’t in the market for gold watches, so this particular Carysfort Reef limited-edition watch isn’t for them. That said, I can’t see any Oris fans being turned off by the fact that the brand has produced a gold watch, given that it is meant to raise higher profits to be shared with a charitable organization. If anything, a gold watch helps Oris attract the attention of people who might typically look at other luxury watch brands but now have something compelling to consider from a brand that they may have respected, but not purchased anything from yet. Price for the reference 01 798 7754 6185 Oris Carysfort Reef Limited Edition of 50 pieces watch is $19,000 USD. Learn more at the Oris website here.