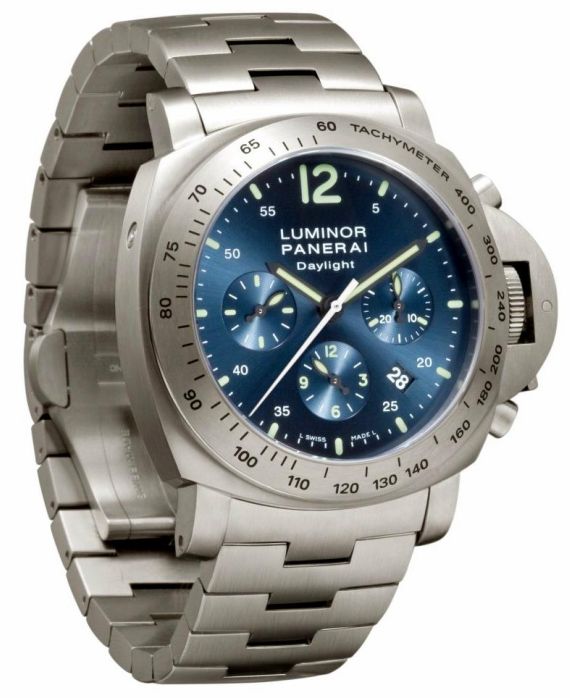 Panerai is pretty regular about their watch release schedule. We tend to get a few new ones each year. With the pre Basel announcements coming up, I expect to see a lot from Panerai this year. One new announcement is the Luminor Chrono Daylight Titanium, which is the ref. PAM 327. This Panerai is distinctly modern in its approach with a broad demographic appeal. I am no Panerai historian, but it is easy to tell that there is mostly “new direction” design accents in this watch. Ignoring the watch itself for a moment, looking at the titanium bracelet indicates a new, more angular look to the masculine watches. Older Panerai metal bracelets featured some really unique curved links. The PAM 327 has what are arguably something simple, plainer Y-shaped links. The look in nice, but not exciting – and the small size of the links adds to wearing comfort, but gone is a lot of the character. 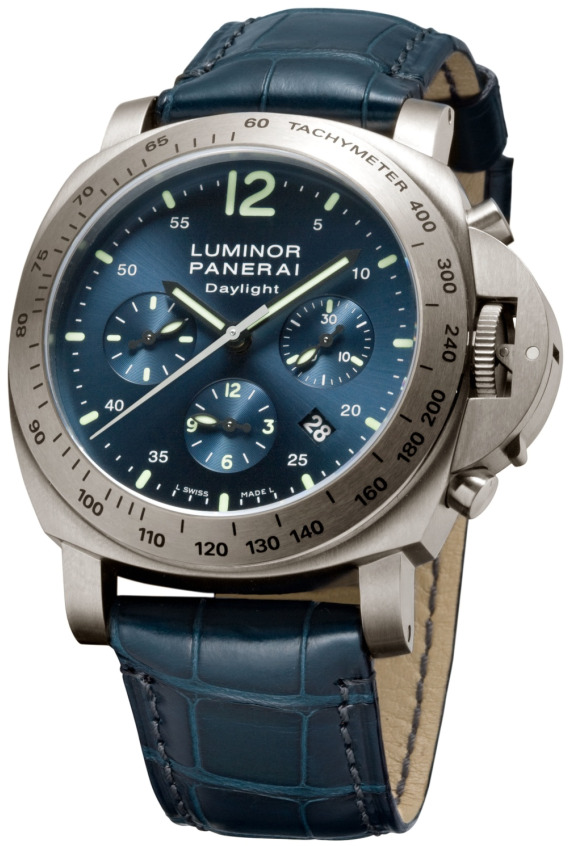 The dial itself shows the metallic blue that people go crazy over. It is a great color, and when done right makes for a beautiful watch. The Sinn 203 Arktis was one of the first to use such a blue dial, and since then a few have displayed it. I am not sure why the watch is known as the “Daylight.” I am guessing that since blue faced models are often arctic themed, the name refers to the fact that such polar locations of the Earth experience far more daylight, especially in the summer. The little touches are also nice, like the matching colored date window disc, and the easy to read chronograph seconds hand.

Inside is a Panerai caliber OPXII automatic chronograph movement. It isn’t in-house made though. Gladly the movement is a certified Chronometer, but Panerai has neglected to mention this on the face. This is a positive or negative trait depending on whom you ask (some people do or don’t like lots of text on the face). From a design standpoint, the tri-compax chronograph layout and overall face design is no nonsense. So practical and utilitarian, you might forget it is a Panerai. That isn’t to say it isn’t nice, but this is of the most function oriented Panerai watches I have ever seen. The 44mm wide case is standard Panerai size, and the titanium used to make the case and bracelet ensures light weight even though the hefty package. The Panerai Luminor Chrono Daylight Titanium is an excellent watch for the conservative watch lover who values function and is drawn by the Panerai name.