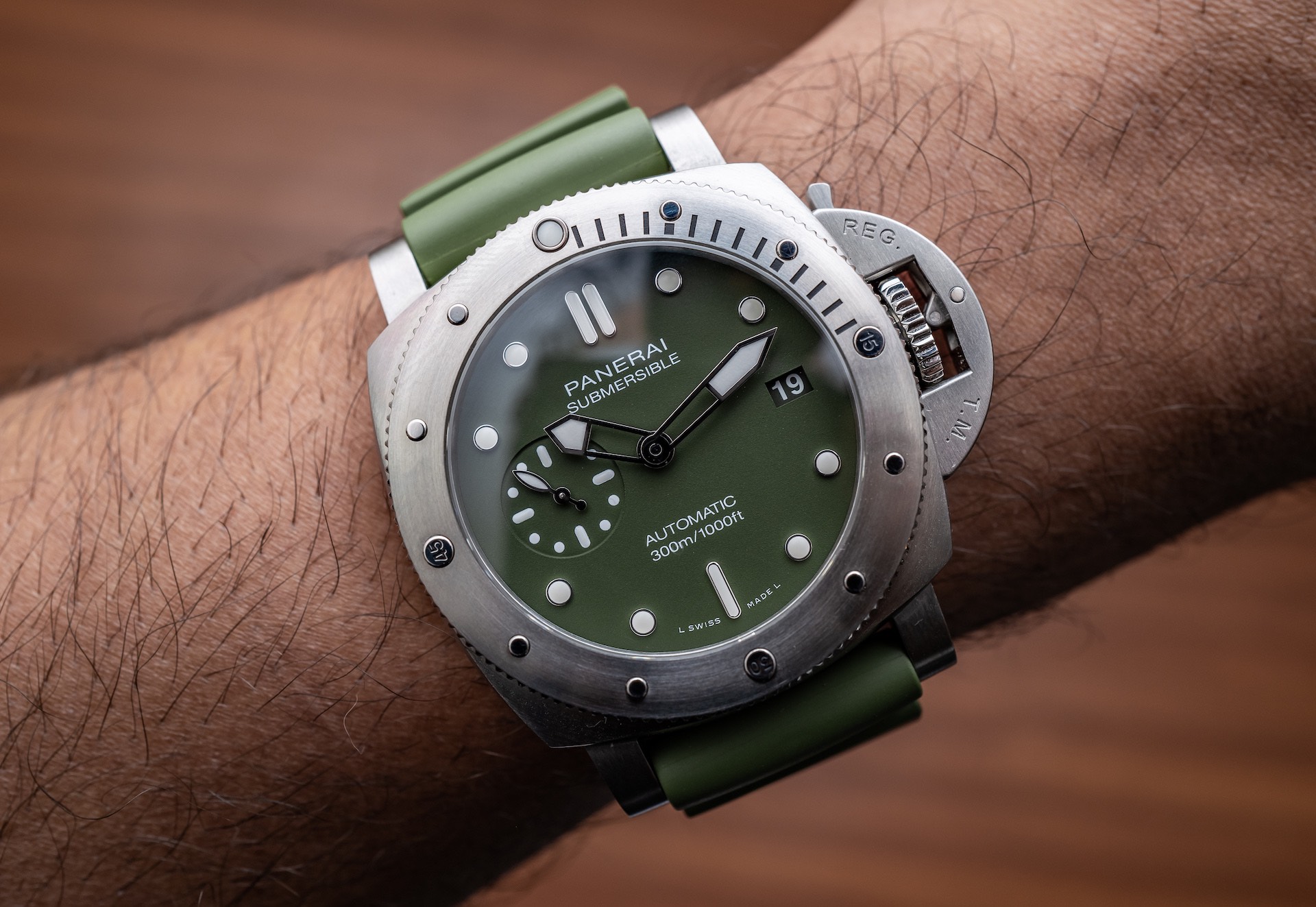 The new Panerai Submersible Verde Militare 42mm PAM01055 just released as an e-commerce exclusive with a total of 500 pieces being made, 100 of which will be allotted to the United States. Panerai has had a handful of green-dial models released this year, though this is the first Submersible done in this colorway.

The Submersible Verde Militare is just the sixth 42mm watch in the collection, but considering the small production run, I can’t imagine it will be around long. Even so, it further shows that Panerai recognizes what so many enthusiasts want: the unfussy classic military diver aesthetic but in a wearable (and, for many, tasteful) case size. It’s a simple recipe and the 42mm Submersible (first introduced in 2016) is the brand listening to a core part of its audience. The Submersible is a pretty niche product, by design, and a lot of Paneristi will never be pleased with the downsized Submersible. That said, there are probably as many, or more, Panerai enthusiasts who are thrilled to have more Submersibles that they can actually, you know, wear. 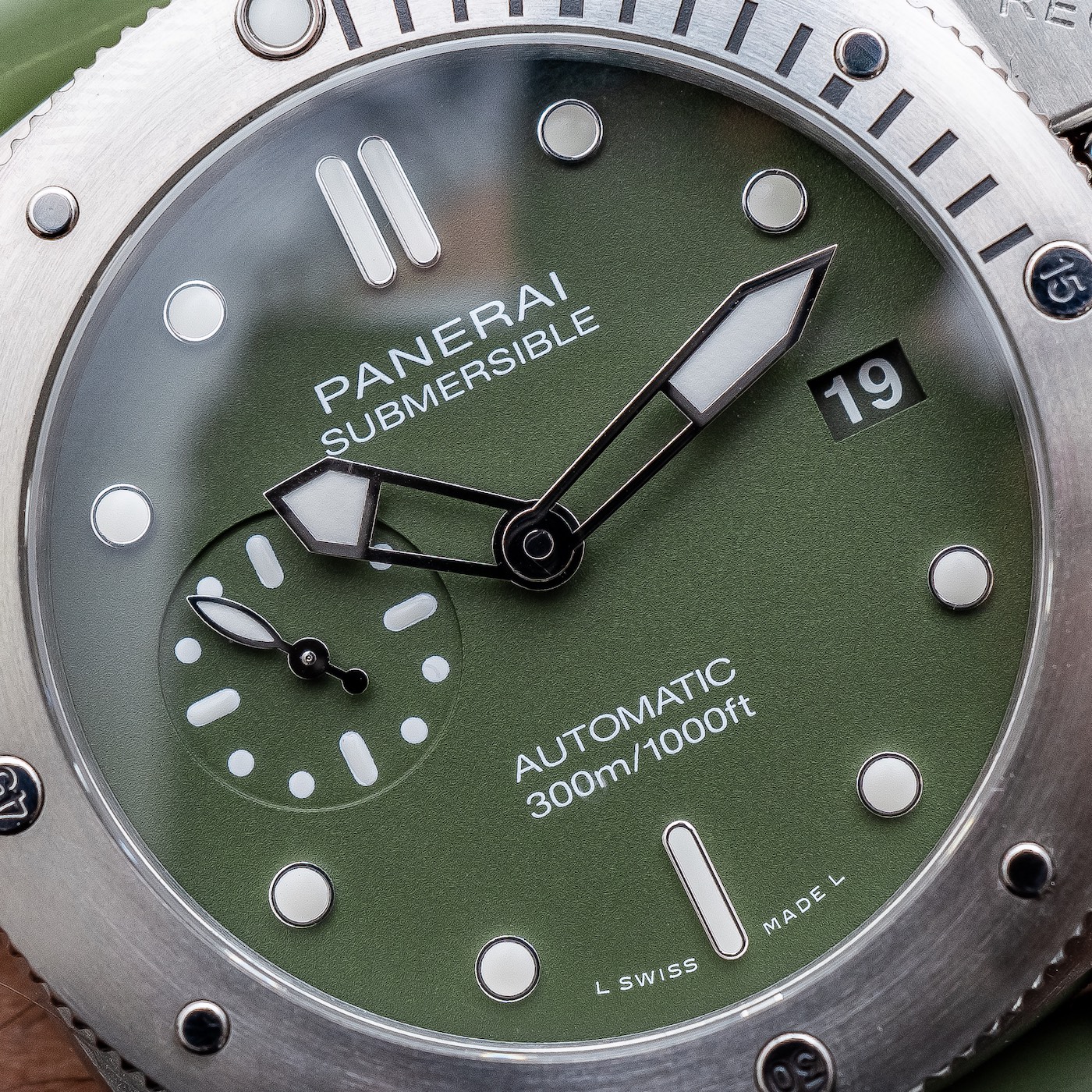 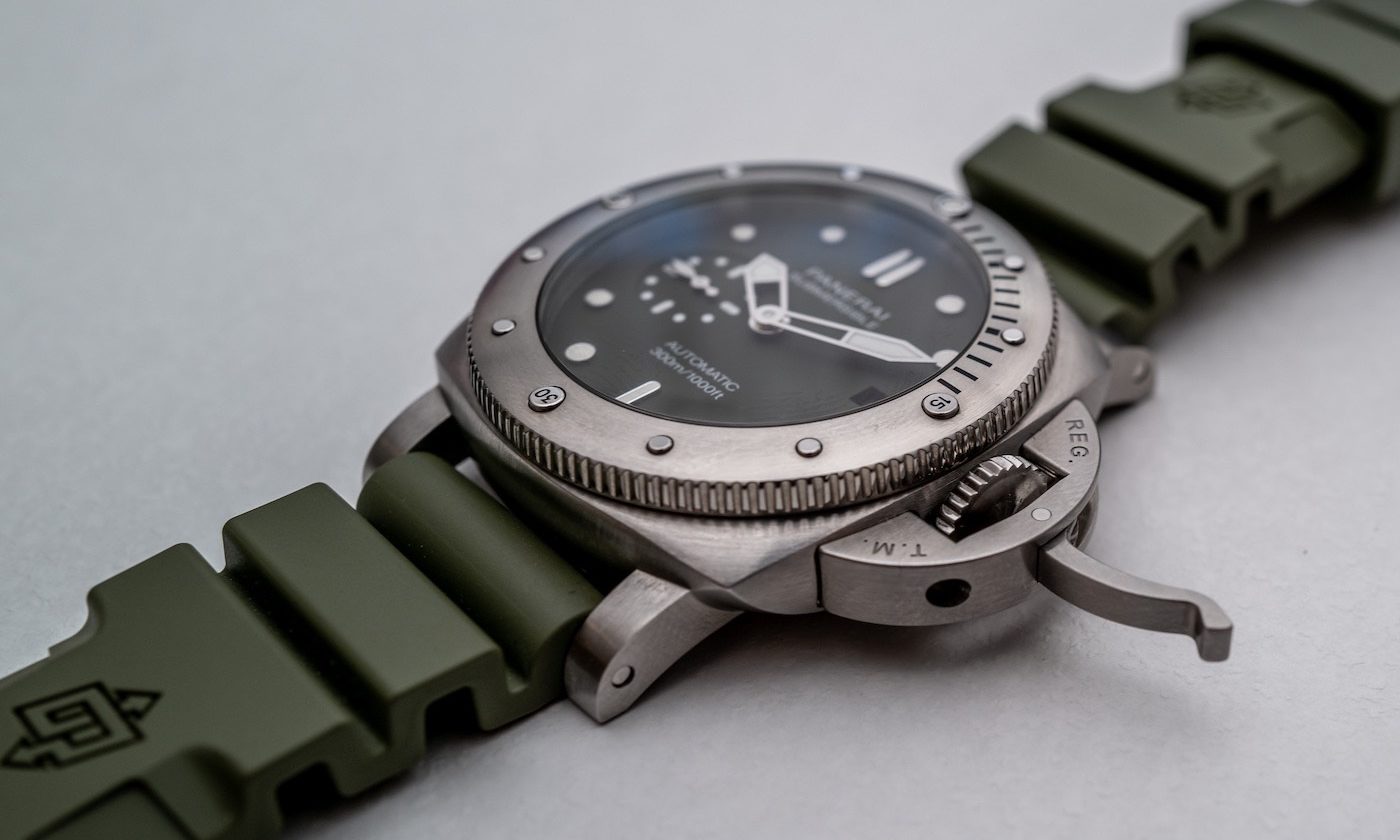 Personally, I’m glad Panerai went with the steel bezel here rather than ceramic. It’s refreshing to see new contemporary watches from the major brands that aren’t luxurified to death, even with smaller case sizes. Hey, it is military green, after all. Speaking of green, yes, it’s very trendy right now. That being understood, you can’t be mad at the Verde Militare Submersible. It looks so good, and the tone of green is spot on. Legibility is great, as is to be expected. And, as with other Panerai, the date window actually matches the dial. In other words, when the trend moves away from green, the Submersible Verde Militare will still look like a classic. 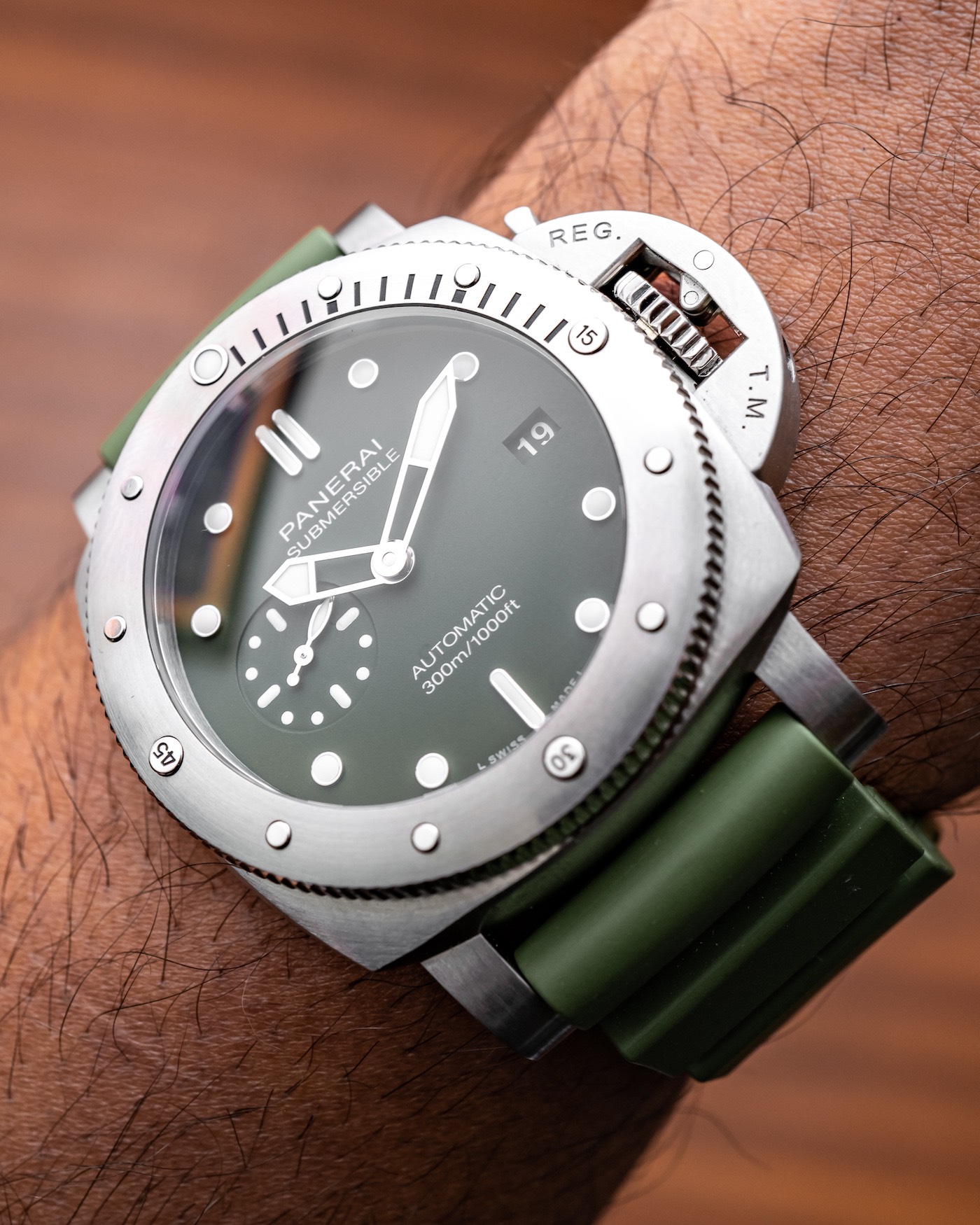 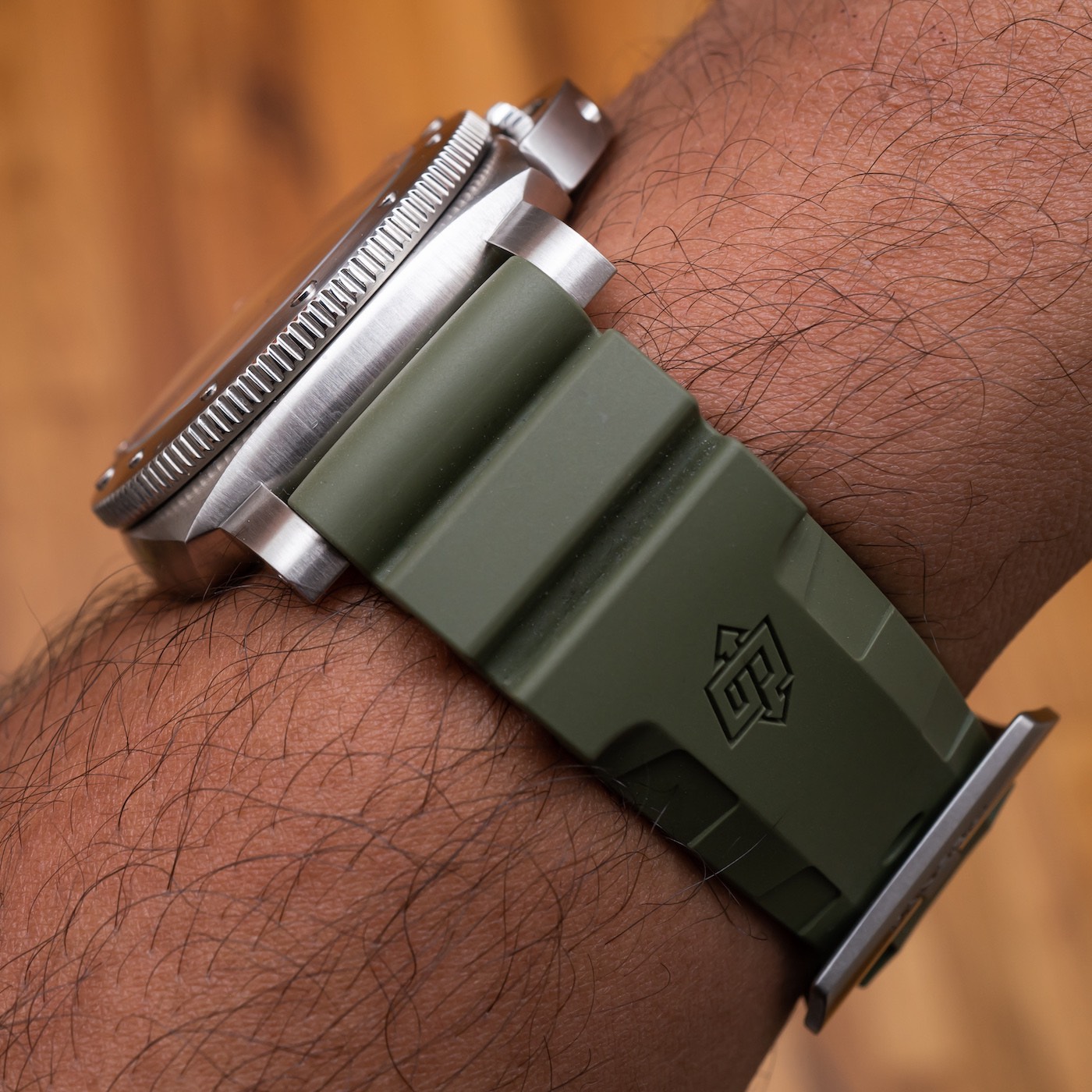 Water resistant to 300M, the watch has an enclosed steel caseback and sports that signature Panerai crown guard. The case is done in brushed steel throughout, as well as on the unidirectional rotating bezel. The 42mm-wide case is 14.37mm-thick and has a lug-to-lug measurement that’s just a tiny bit more than 50mm. As an everyday-wear diver, the 42mm Submersible is a compelling and actually unique alternative to the Submariner, Seamaster Planet Ocean, and the other usual suspects. 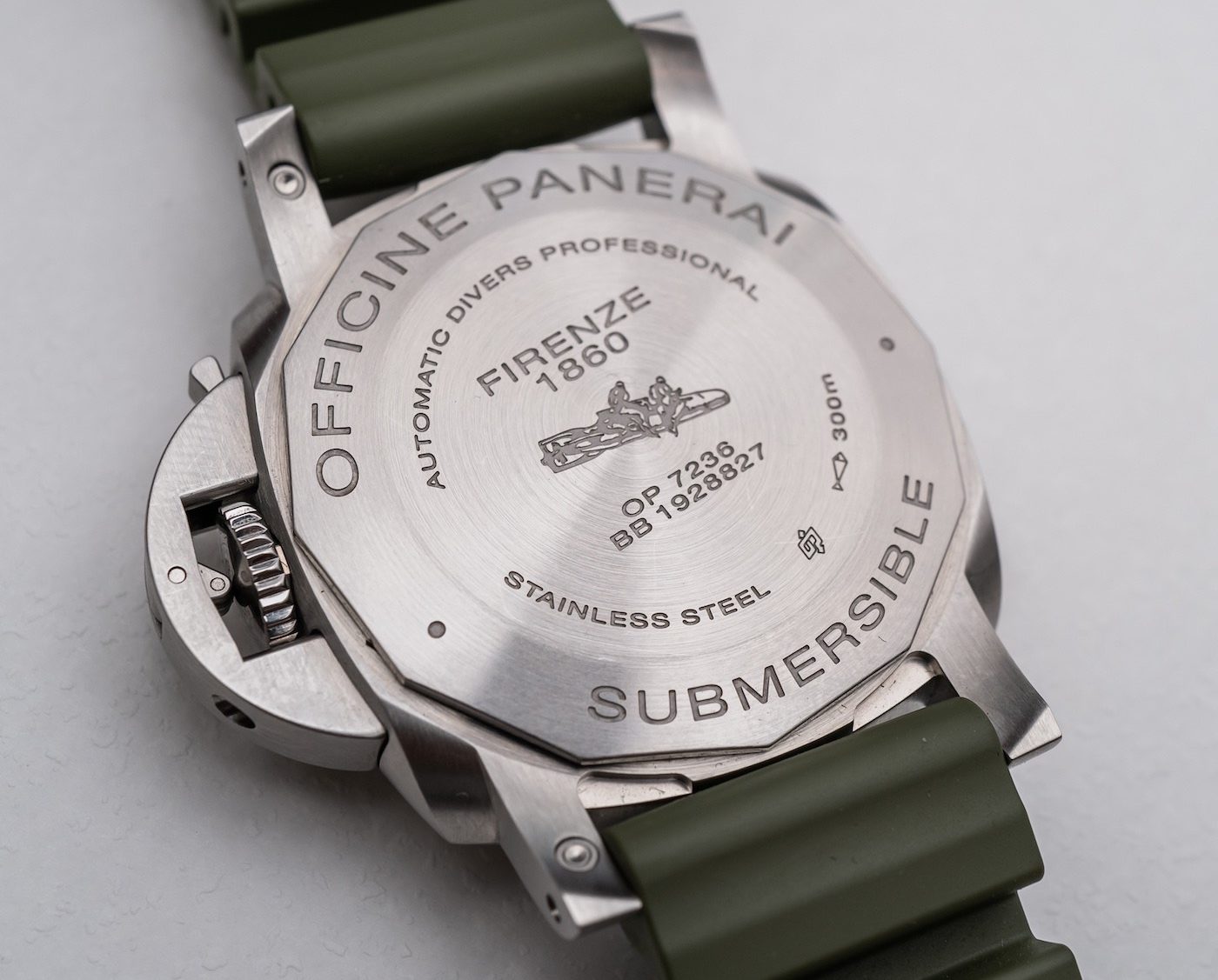 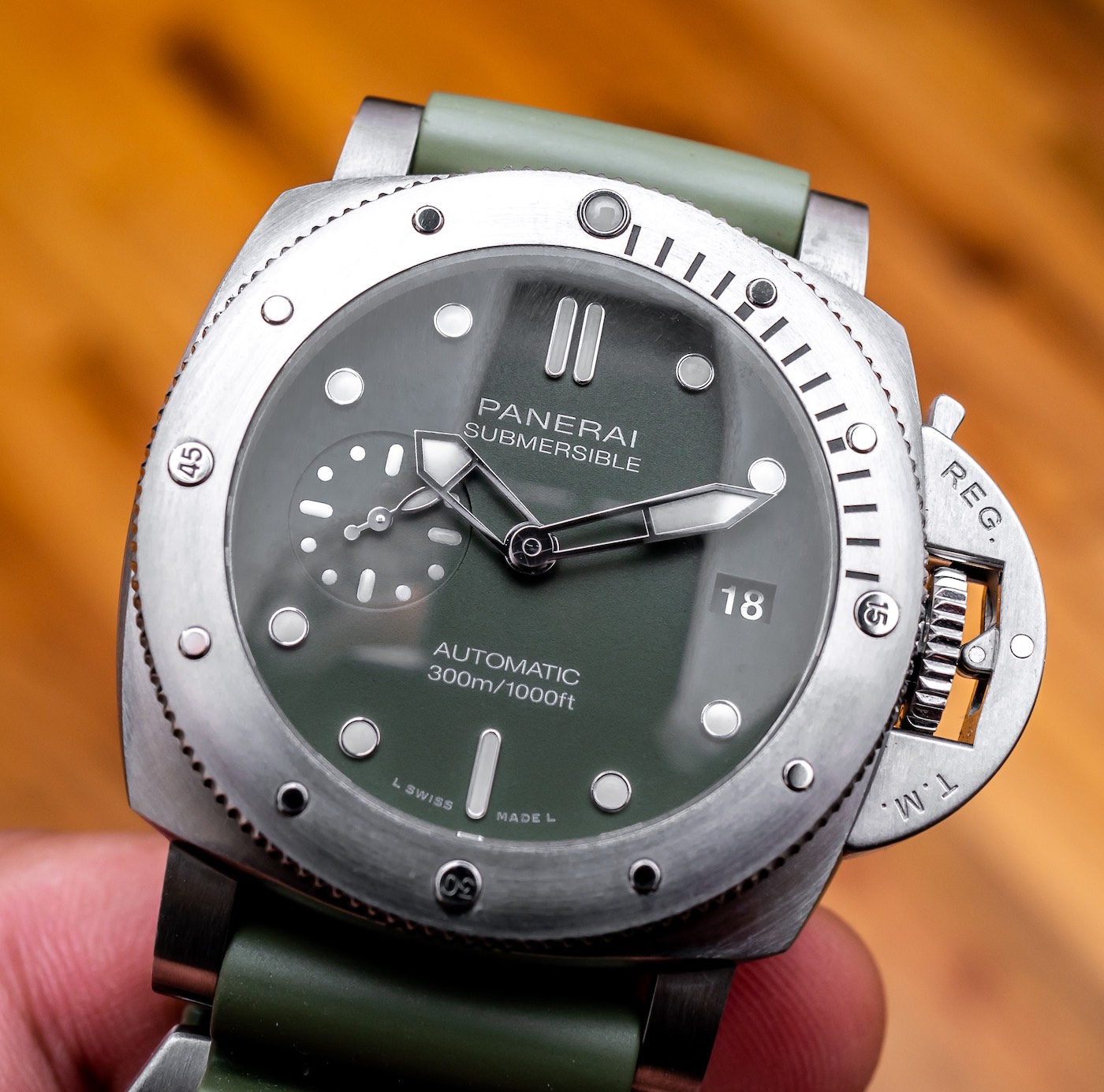 The Submersible Verde Militare is outfitted with the automatic in-house P.900 movement, which Panerai is using for newer models (the existing 42mm Submersibles have the OP XXXIV calibre). This movement debuted in some of this year’s Luminor Due watches, though, interestingly enough, I don’t think any of the watches that use this movement have an exhibition caseback. In any case, the P.900 is quite slim at 4.2mm-thick, operates at 28,800 vph,  and has a three-day power reserve. 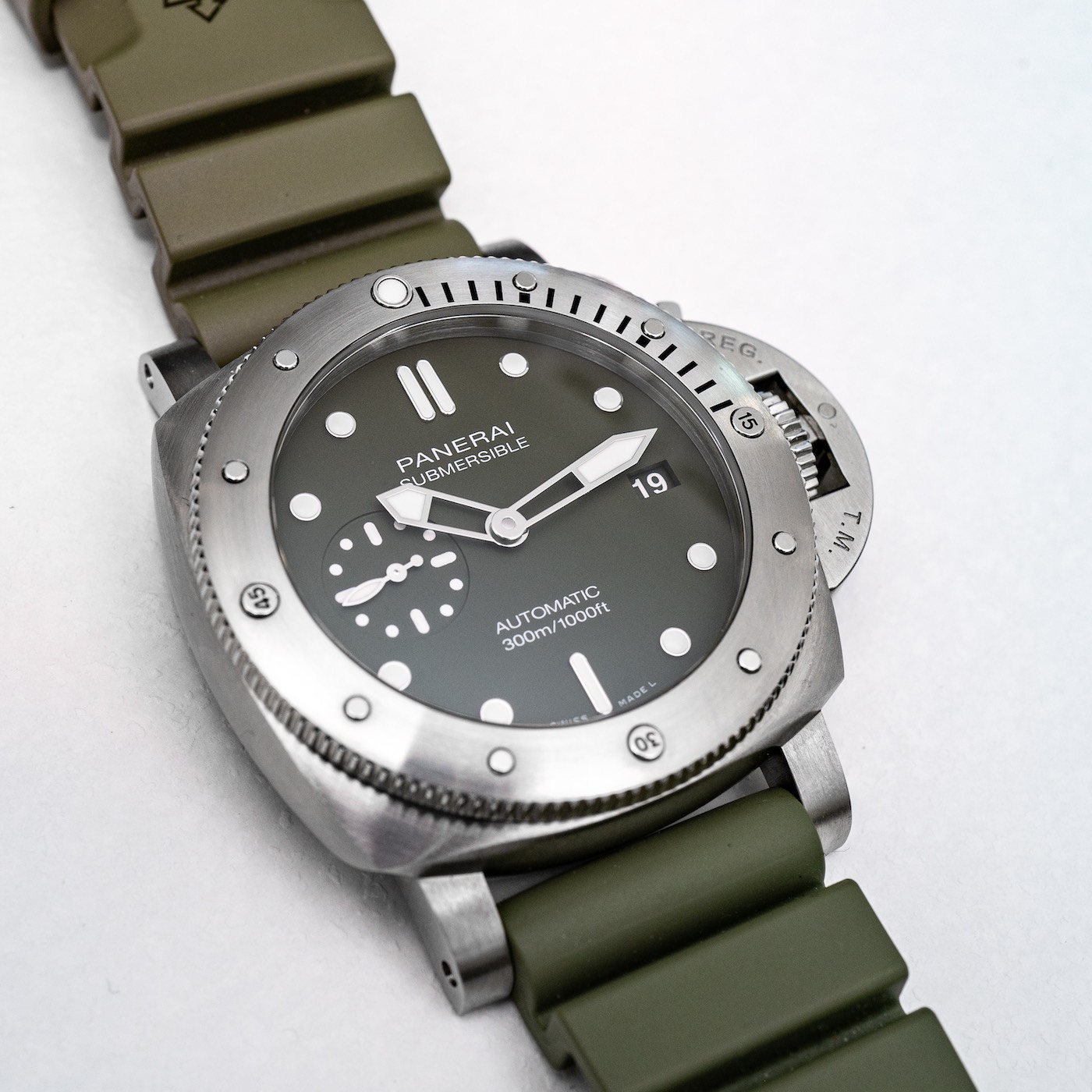 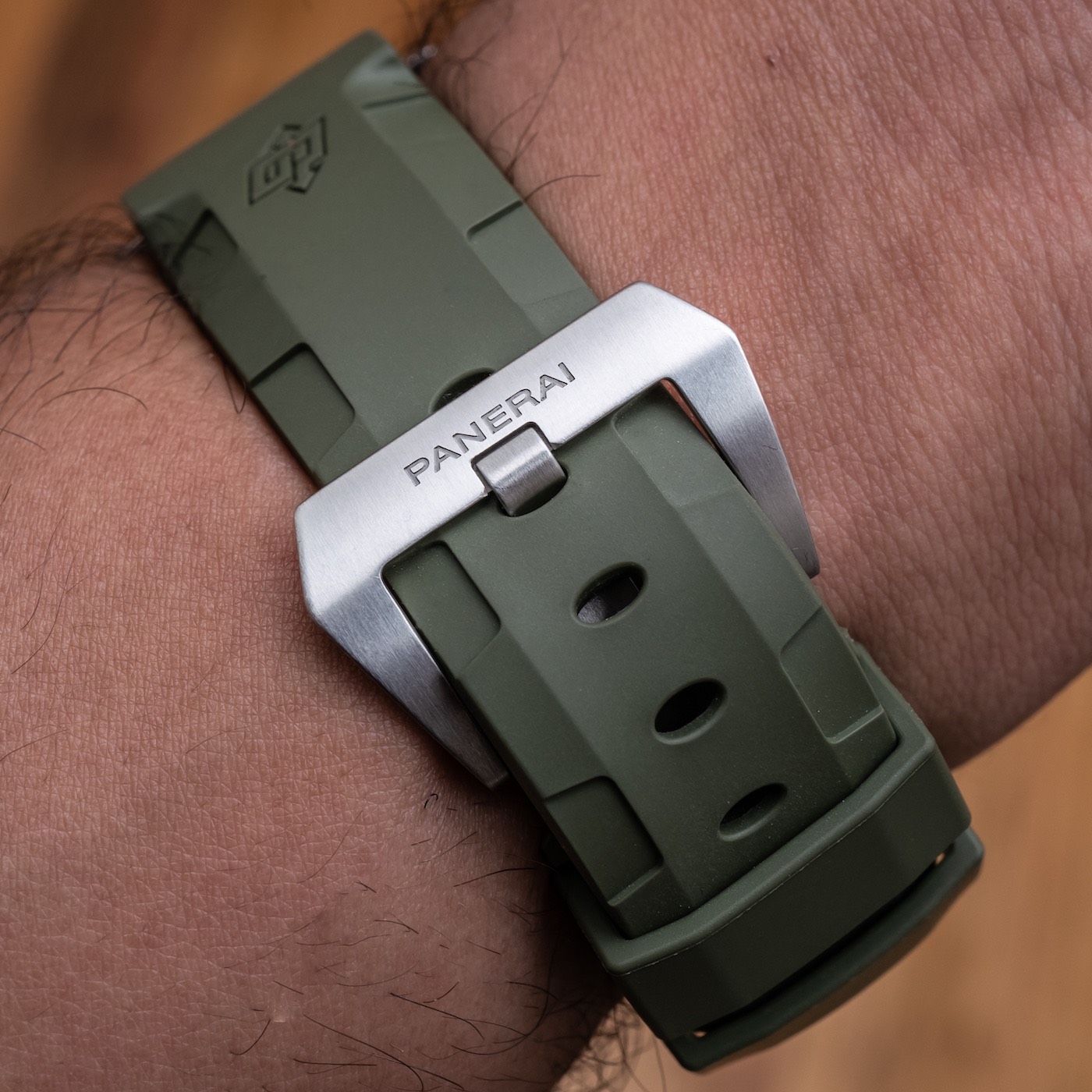 The matching green rubber strap is comfortable and looks good, though it does veer on being a little matchy-matchy. Fortunately, there is the quick-release strap change system that allows you to swap it out. Panerai also includes a black, water resistant fabric strap with the Verde Militare, though I sadly wasn’t able to see it myself. Still, I’d probably buy myself a black rubber strap, as well, as it would make the piece a lot more versatile. 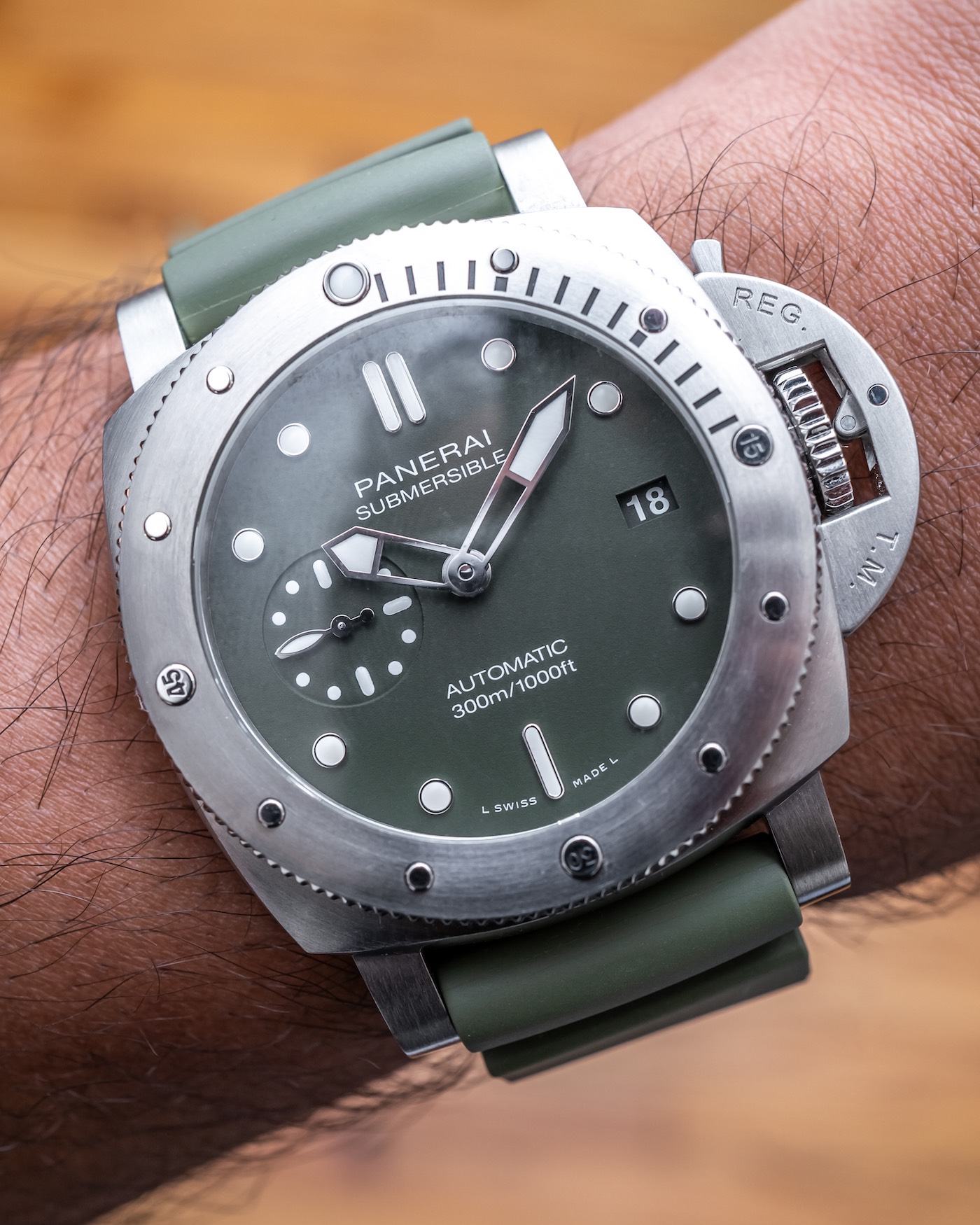 As of late, Panerai has been embracing its boutiques, as well as its e-commerce presence. Again, the Submersible Verde Militare 42mm PAM01055 is going to be available exclusively on the e-commerce page and will be limited to 500 pieces, with 100 allocated to the United States, with a price of $8,700. You can learn more at panerai.com