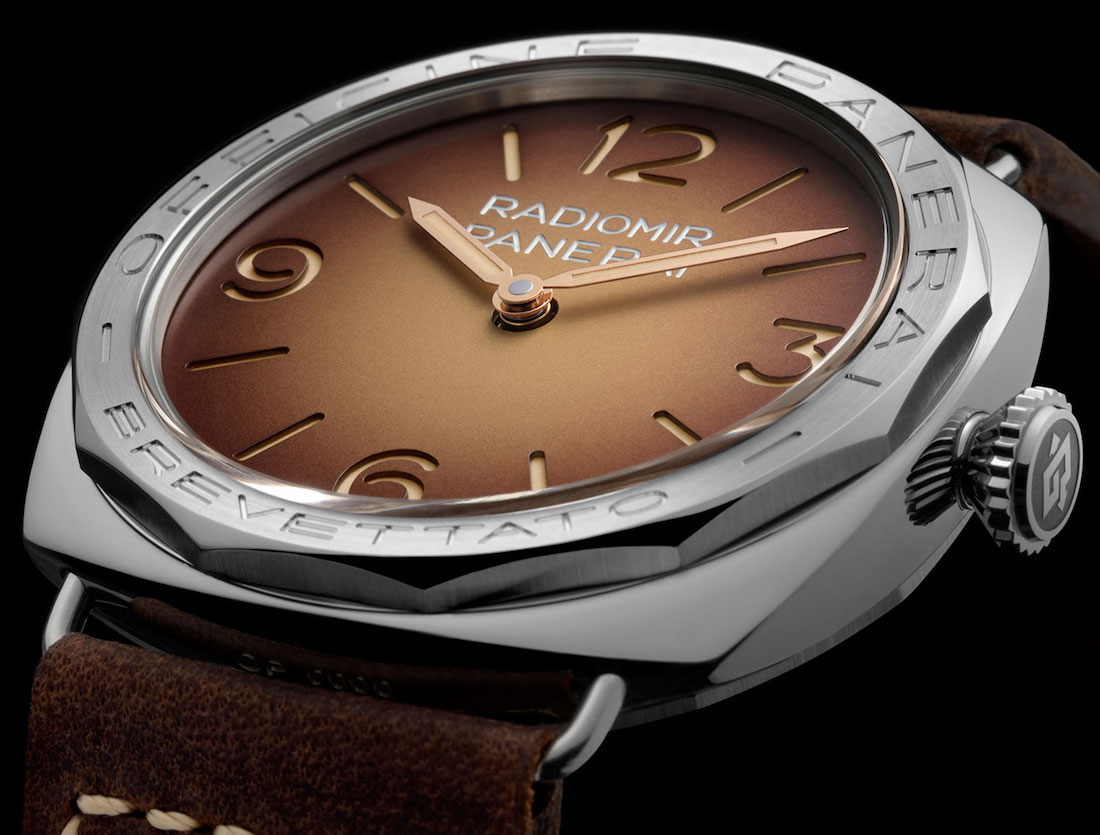 We are just two months ahead of the luxury watch fair SIHH 2017, so it was about time for a head-turner pre-event teaser, which in this case is the – you guessed it, vintage-inspired – Panerai Radiomir 3 Days Acciaio Brevettato PAM685 and PAM687 watches. Some cool details here, so let’s take a look, before we go hands-on with it in 8 weeks time. 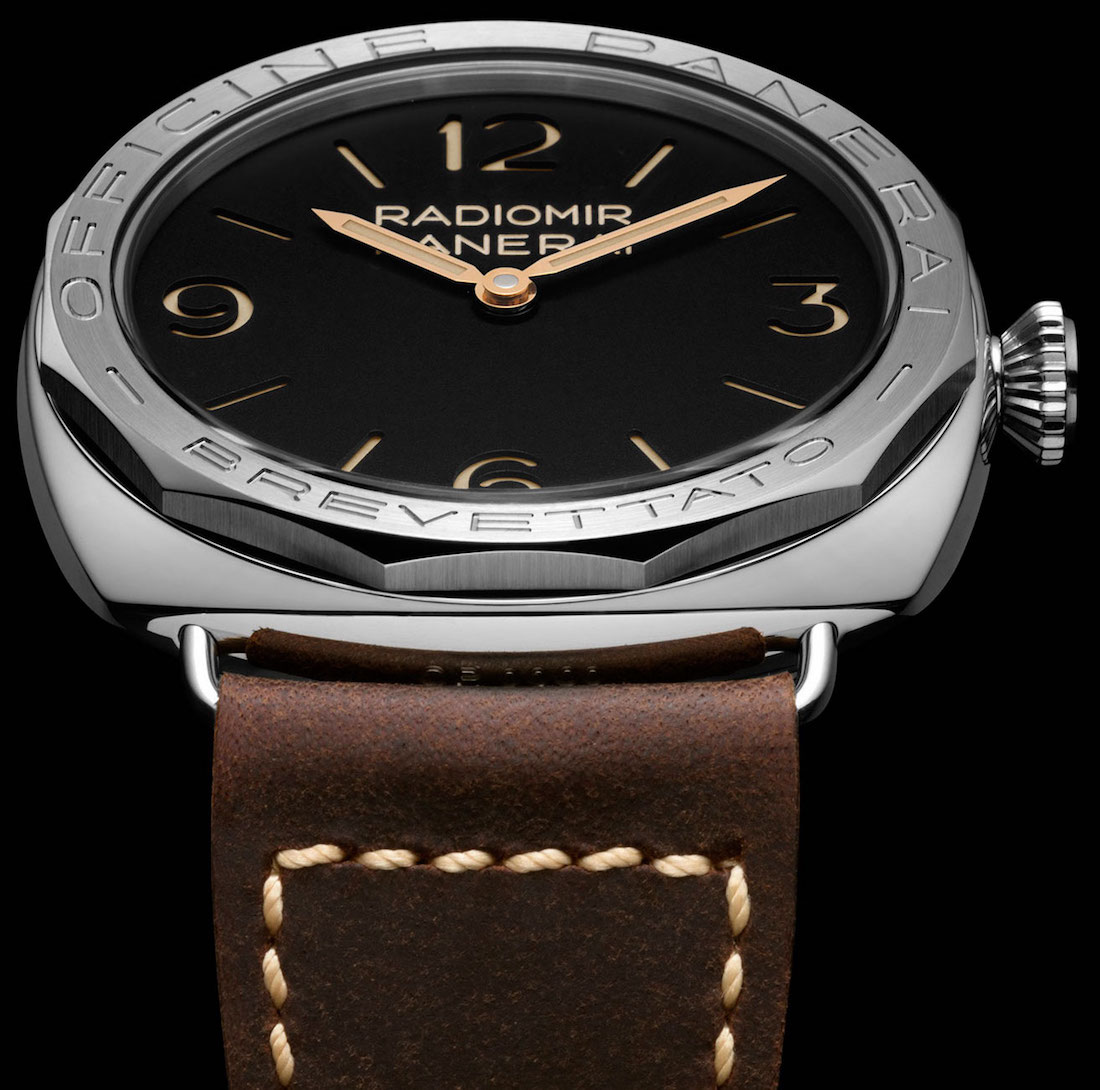 As far as dive watch lore is concerned, Panerai has been there since the beginning of man’s mid-century race to the bottom of the sea, and has a number of extremely rare vintage editions provided to the Royal Italian Navy to prove it. One such example was the original Radiomir, whose unique, 12-sided bezel was proudly engraved with the proclamation of its patented (“Brevettato”) design – you know, just in case navy divers wanted to copy it, or something. Since Panerai surfaced as a commercially available brand, it has been dipping into its archives to recreate this super cool blend of military-grade ruggedness and sleek Italian design, and the Panerai Radiomir 3 Days Acciaio Brevettato PAM685/PAM687 watches fit into that larger picture beautifully. 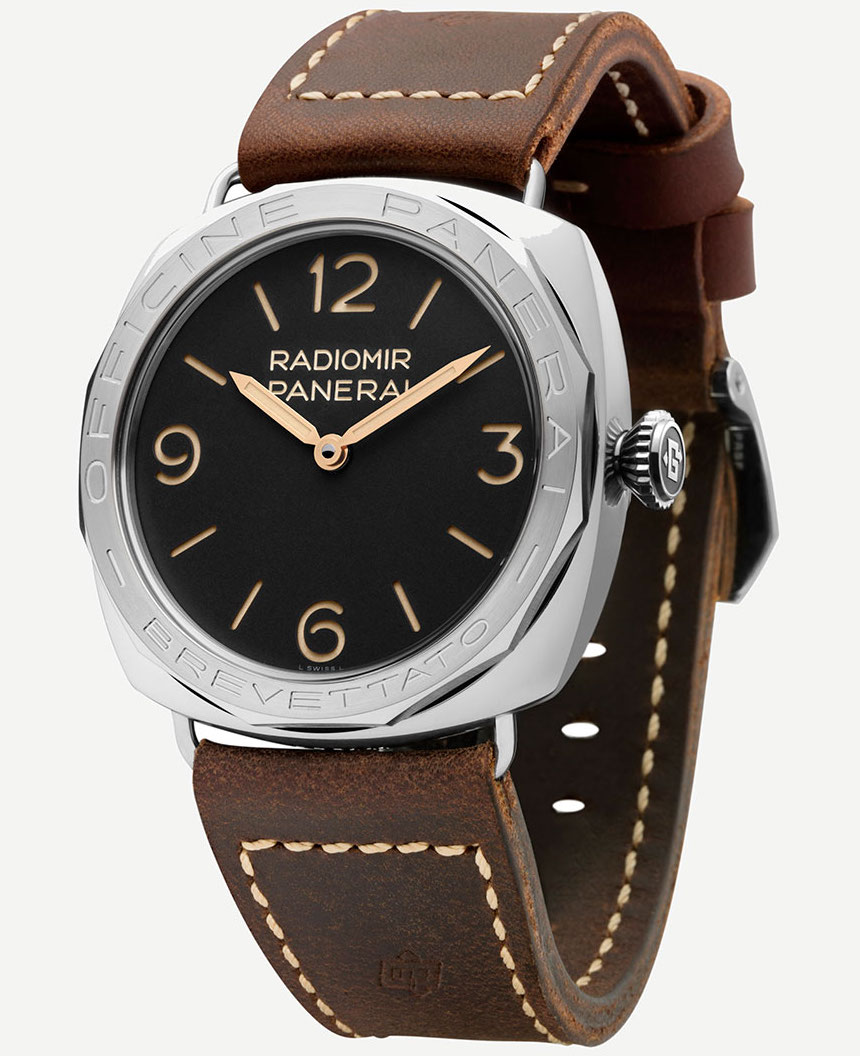 While most watch brands are content to drop in a date aperture, increase the case size by a few millimeters, and finish things off with a generous dose of beige Super-LumiNova, Panerai is trying to preserve the exact dimensions and aged character of the original with this new Panerai Radiomir 3 Days Acciaio Brevettato… they do go so far as to offer the watch in two dial variants: the PAM685, as seen above, comes with a standard black dial and the aforementioned beige luminous cutouts… 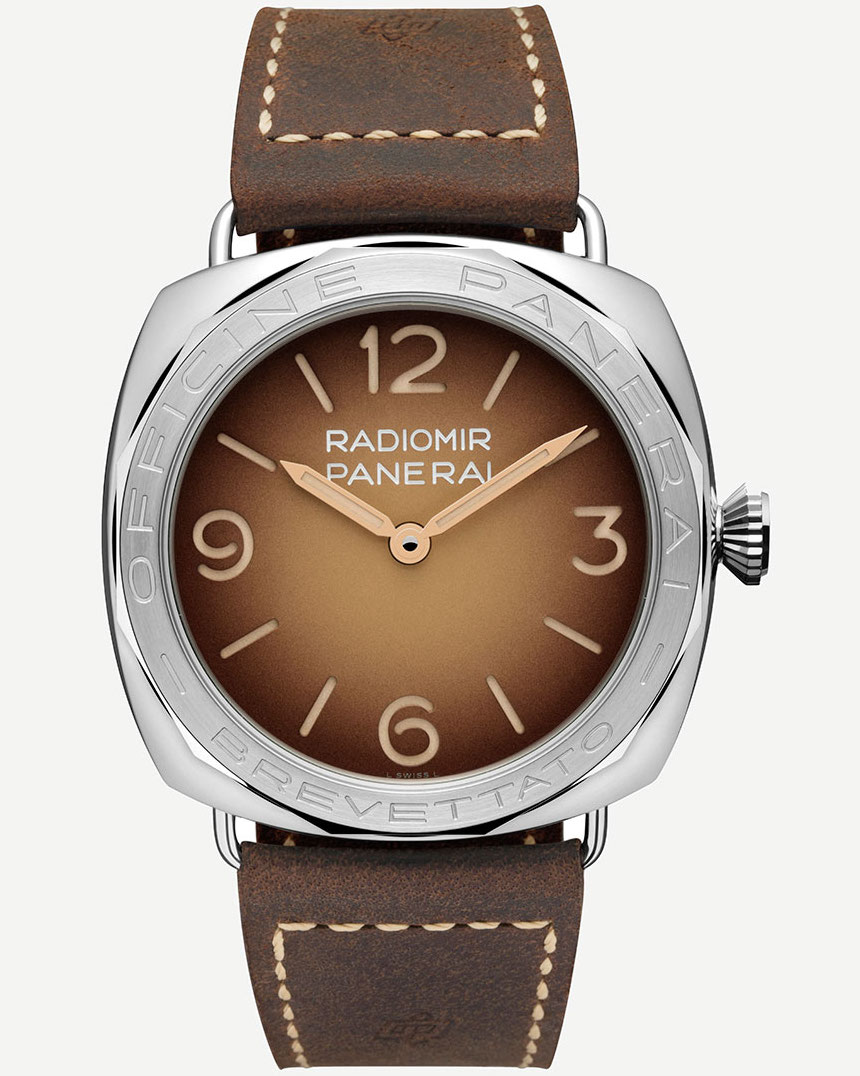 …While the PAM687 takes the faux-patina adoption to new heights with a brown “tropical” dial designed to mimic the discoloration that occurs over time on lacquered dials (enamel, by contrast, will never fade, but these having been military spec watches, there of course was no demand for fancy enameled dials). It’s the first time Panerai has ever introduced an offering quite like this, so love it or hate it, the significance is still certainly notable. 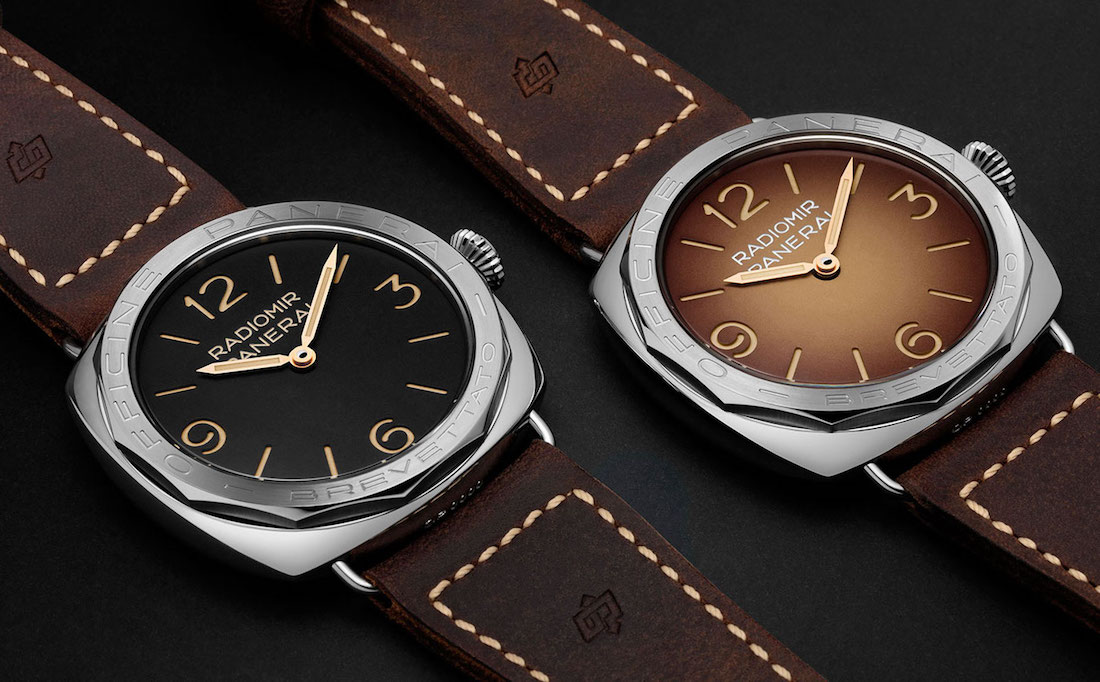 The rest of the watch mirrors other aspects of the original Radiomir, including the swarthy 47mm case diameter, Plexiglass crystal, wire lugs, time-only indication without even running seconds, and of course, an oversized onion crown – a necessity carried over from military watches of the era that had to be wound while wearing gloves. Unlike the originals, though, Panerai is including a spare crystal in the package – Plexiglass does scratch considerably more easily than sapphire – for those who prefer their watch to not accumulate the same levels of character that the vintage editions might now be found in.

While it isn’t new to these pieces, a cool detail that I personally like a lot is how the modern Radiomir is fitted with removable wire lugs to facilitate changing of the included stitched leather strap. Granted, these lugs aren’t simply welded on to the case like the original examples (which, I guess, some hardcore collectors would have preferred), but the fact that Panerai eschewed spring or screw bars in the name of strap-changing convenience and opted for full wire lugs is a testament to their dedication to the source material. 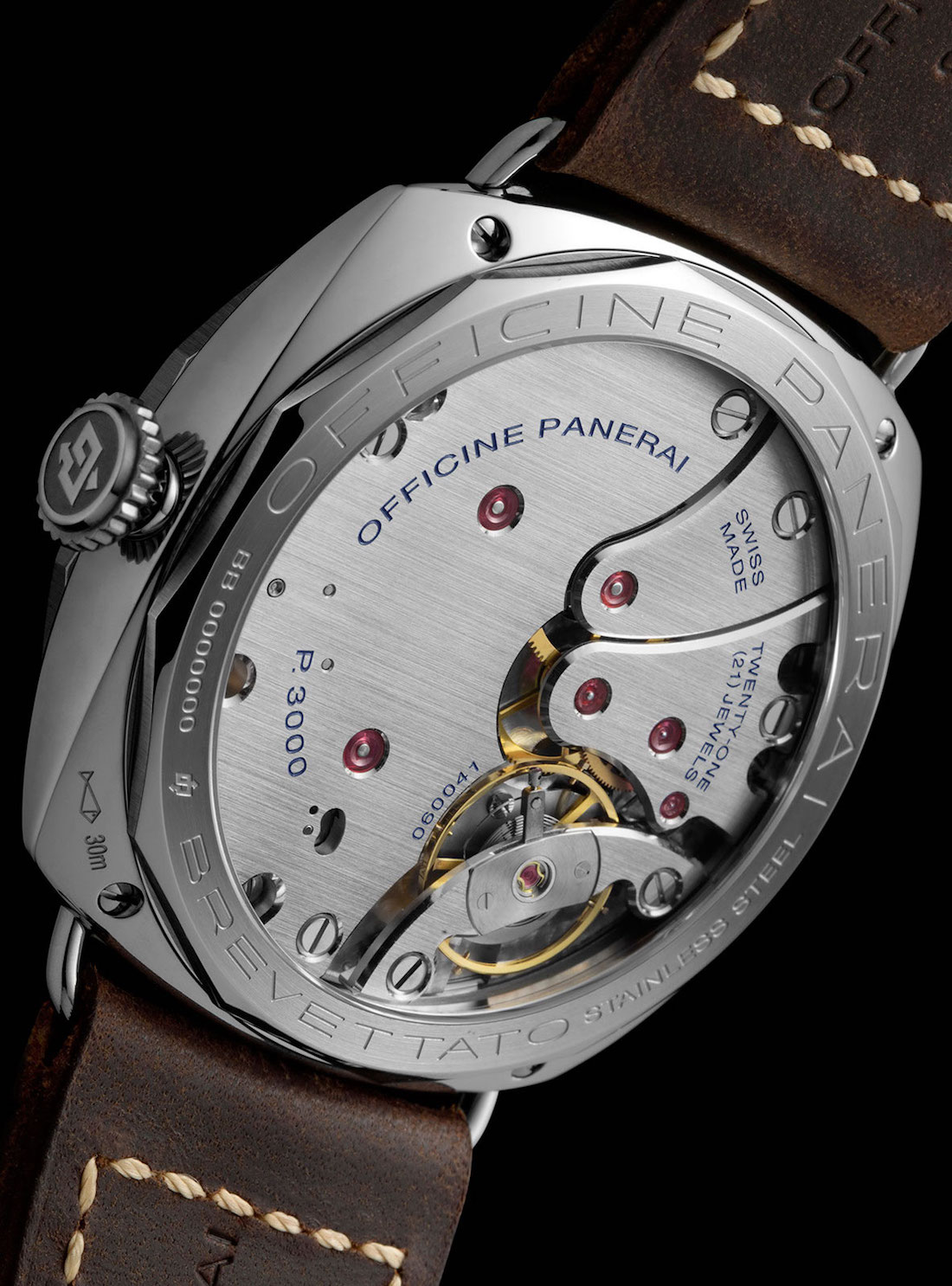 The Panerai Radiomir 3 Days Acciaio Brevettato is powered by the manual-winding P.3000 calibre – a time-only movement produced in-house by Panerai, characterized by the absence of a running seconds hand, its handy quickset hour, and generous 72-hour, or 3-day, power reserve. The movement is on display through the sapphire caseback, which is sealed by a matching 12-sided rear bezel, which lends a neat, 3-piece symmetry to the side profile of the watch. Now, despite all these cues stemming from a purpose-built maritime instrument, the Panerai Radiomir 3 Days Acciaio Brevettato is only water resistant to 30 meters – depths that pale in comparison to some of Panerai’s modern dive watches, but what would have been more than enough for man’s earliest days of submarine exploration. 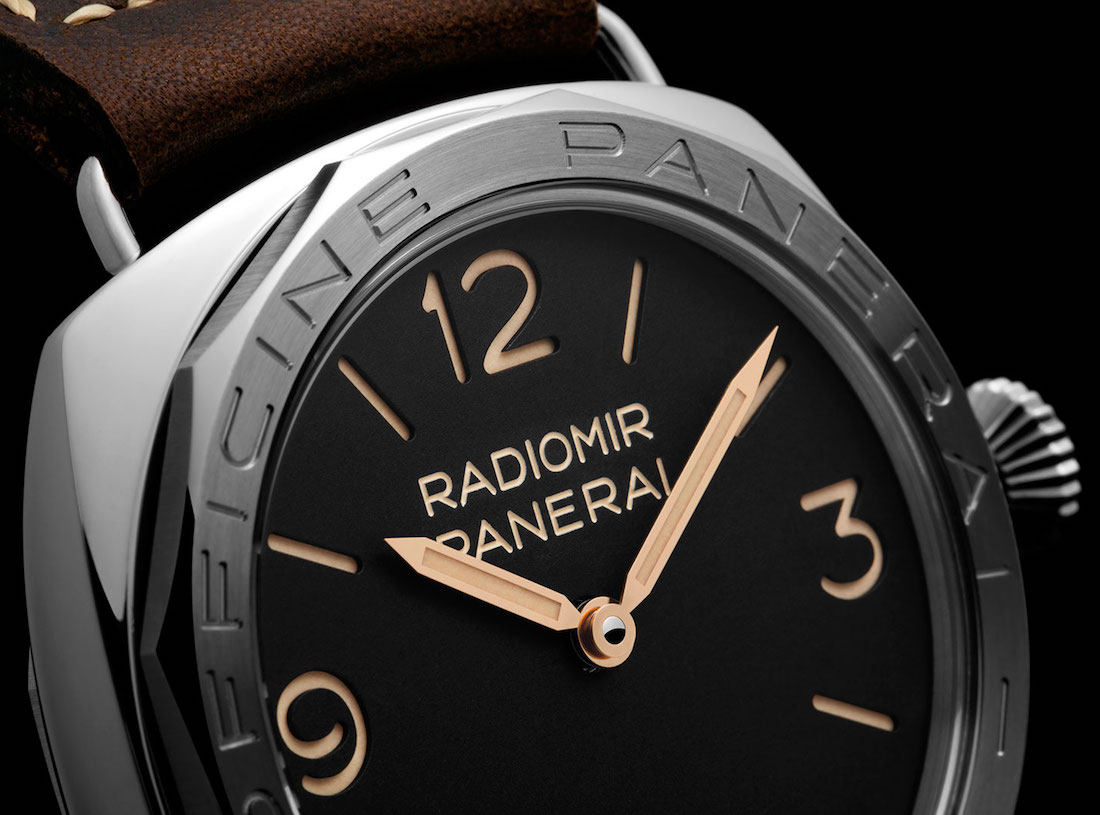 If you’re keen to celebrate Panerai’s unique place in dive watch history, you can rest assured that they’re not planning on making very many of the the Panerai Radiomir 3 Days Acciaio Brevettato… How many? Panerai apparently has not made up their minds yet, as neither the number of pieces in the special edition PAM685 black dial variant and PAM687 brown dial variant, nor their prices are known at this point. While we’ll know the exact production numbers for these two new Radiomirs in January, for now, we can say that official pricing for the Panerai Radiomir 3 Days Acciaio Brevettato (just confirmed to us by Panerai) will be $9,800 in either variation. panerai.com