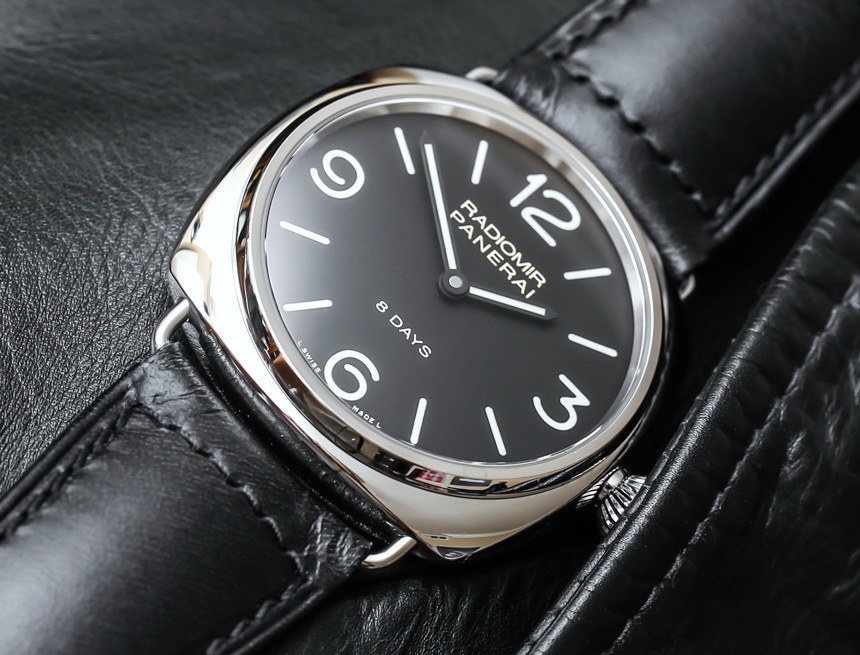 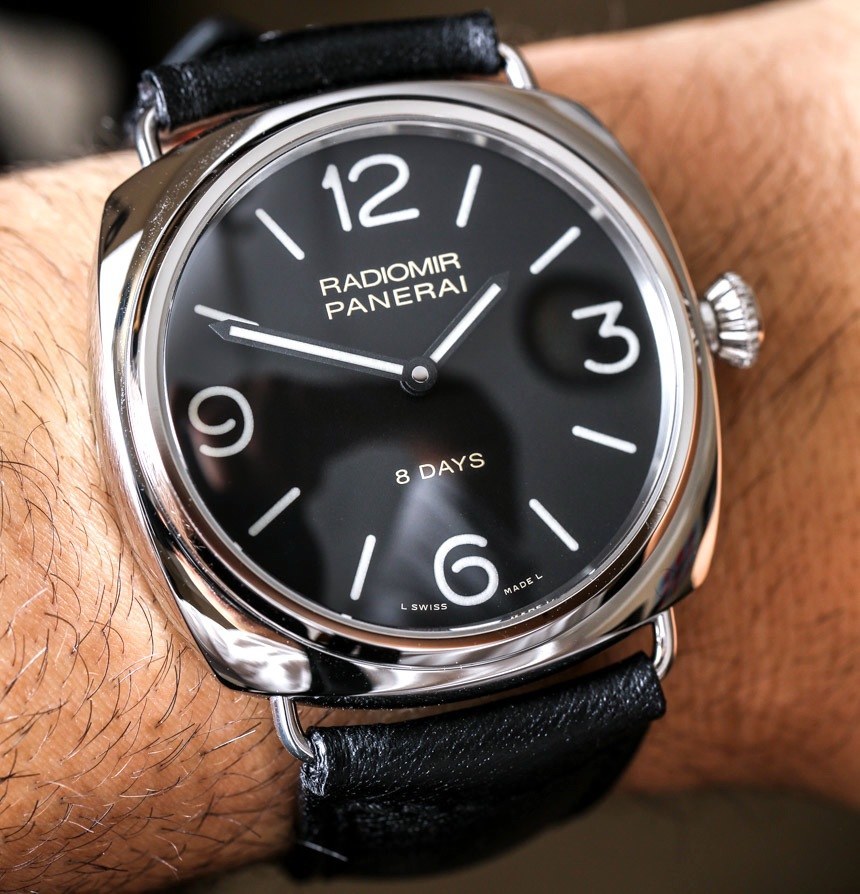 Bearing the classic look of what most people associate with a Panerai dial, along with the simplicity of just two hands on the face indicating only the hours and minutes – for many watch lovers, this Panerai Radiomir Black Seal 8 Days watch (aka PAM610) represents one of the purest Panerai designs available. For that reason, I really like this particular watch that combines many desirable aesthetic traits along with a comfortable fit on the wrist. While it isn’t very fancy compared to a lot of the company’s other products, the Panerai Radiomir Black Seal 8 Days PAM610 watch offers a lot of what you should be looking for in a timepiece from the popular brand. 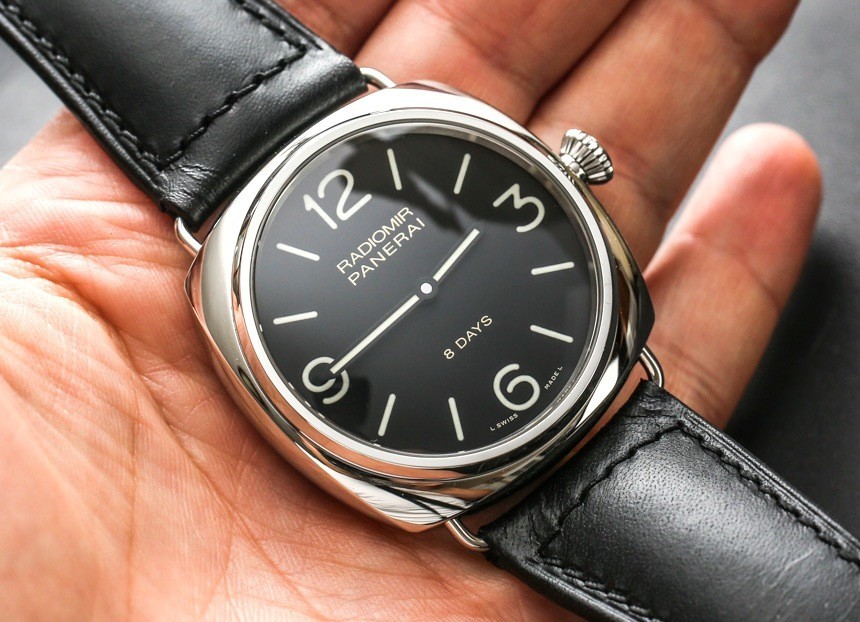 Panerai’s modest pantheon of “historic” case designs begins with the now-referred-to-as “Radiomir” case which best evokes the brand’s beginnings producing Italian-designed military diving instruments in partnership with Rolex. The cushion-style Radiomir case has an easy-to-grip turnip-style crown and wire loop-style lugs which actually look super cool by today’s standards. This particular Radiomir case in steel showcases the “big watch” appeal of the brand, being 45mm wide, but is also surprisingly wearable with its thinner (for Panerai), roughly 12mm of thickness that helps it sit flatter on the wrist.

Elegant as always, the Radiomir case in this instance is entirely polished with a domed sapphire crystal making for a dressier look in the scheme of Panerai’s catalog of vintage-style sport watches. If you need a Panerai to work with shorts or a suit, then the Panerai Radiomir Black Seal 8 Days PAM610 will actually work quite well. That said, the 45mm-wide case size isn’t exactly tiny, so you either need wide wrists or to prefer the look of a slightly too-large watch on the wrist. This latter style is hard for most timepieces (and people) to pull off, but Panerai makes a solid case for itself with something like the Panerai Radiomir Black Seal 8 Days PAM610. 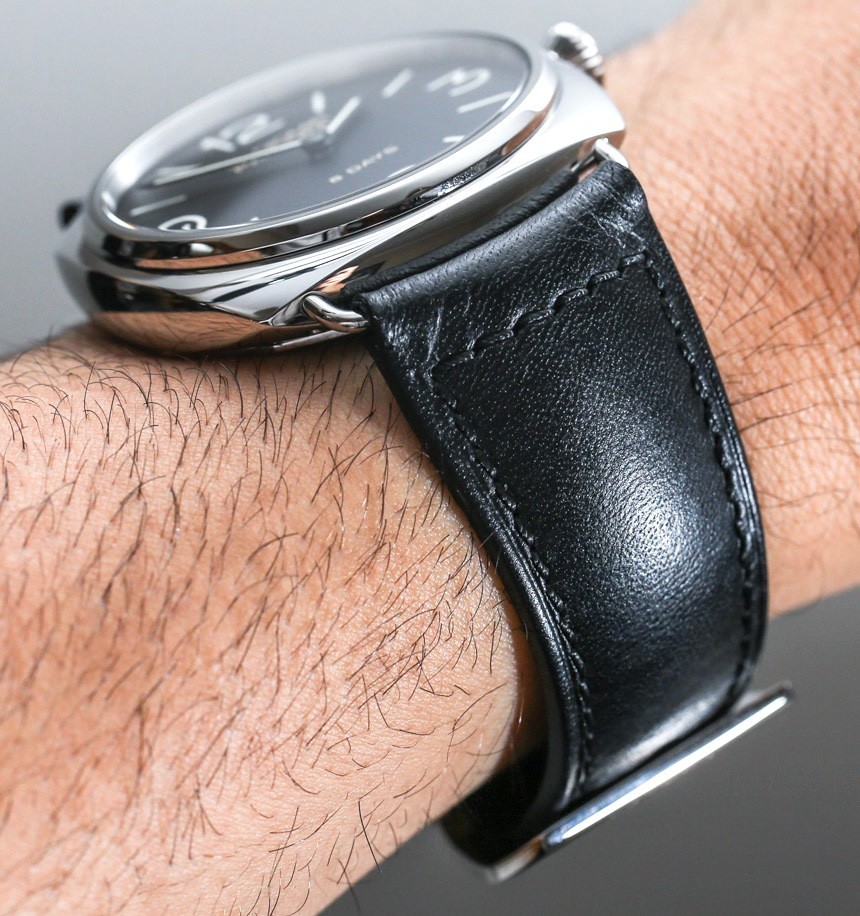 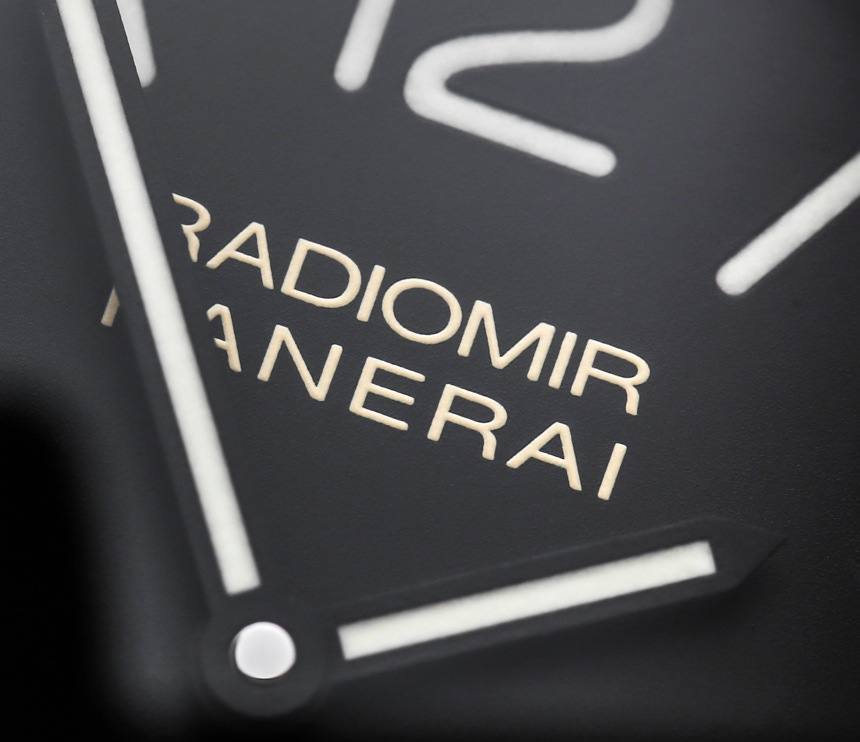 Many of the most beautiful, actually vintage Panerai watches have just two hands like the Radiomir Black Seal 8 Days Acciaio (which is just “steel” in Italian). We’ve seen a number of such watches come out in small quantities over the years – but often as very expensive limited editions, or as Panerai’s absolute entry-level watches that do not contain in-house movements. 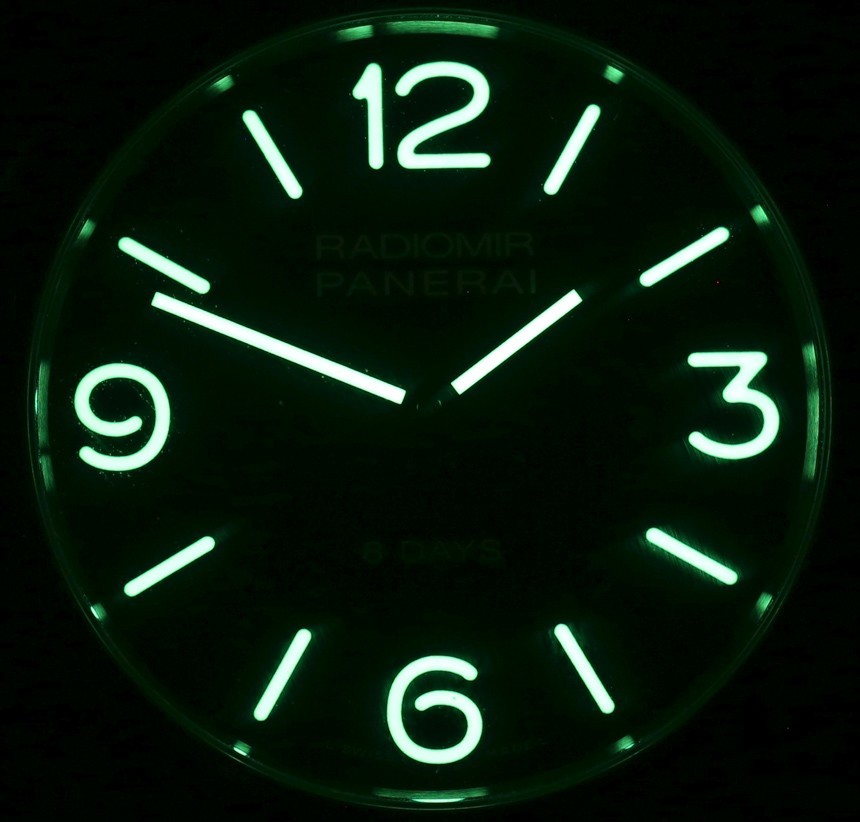 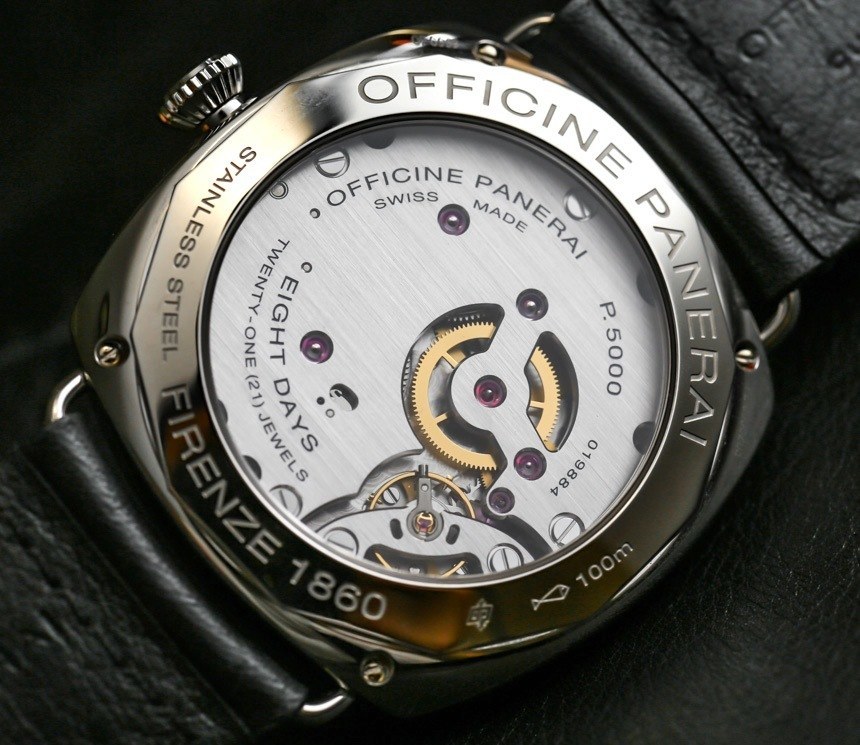 With the advent of the calibre P.5000 in-house-made manually-wound movement, the doors have been opened for sexy-looking and affordably priced Panerai watches with simple two-hand dials and in-house movements. Note that Panerai also produces the calibre P.3000 movement which is very similar and tends to be in slightly higher-end watches. On paper, both the P.5000 and P.3000 movements are very similar, being manually wound and indicating only the hours and minutes. The P.3000 benefits from a more attractive architecture and wider size (both are actually pretty wide), but oddly has a shorter three-day power reserve while the P.5000 has a long eight-day power reserve. 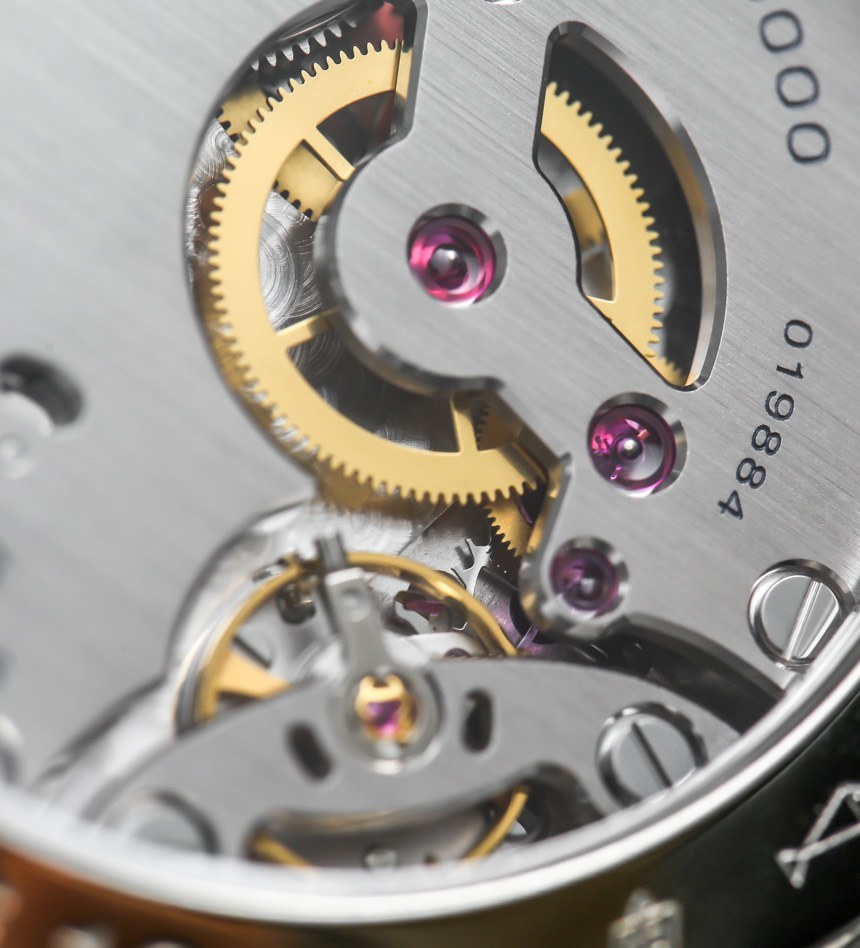 Like the P.3000, the P.5000 operates at 3Hz (21,000bph), but has a slightly smaller balance wheel (which is arguably a better thing from a performance standpoint). Each of the movements offer different styles of fine regulation and shock absorption, while Panerai remarks that both of the movements are intentional homages to the historical mechanical movements found in original Panerai watches from the early mid-20th century. Interestingly enough, unlike the P.3000 movement which is found only in watches, the P.5000 movement is also used in a few of Panerai’s pocket watch table clocks (basically pocket watches that come on a little stand). The idea is that you only need to wind them once a week as you enjoy looking at them while at work or at your desk the rest of the time. 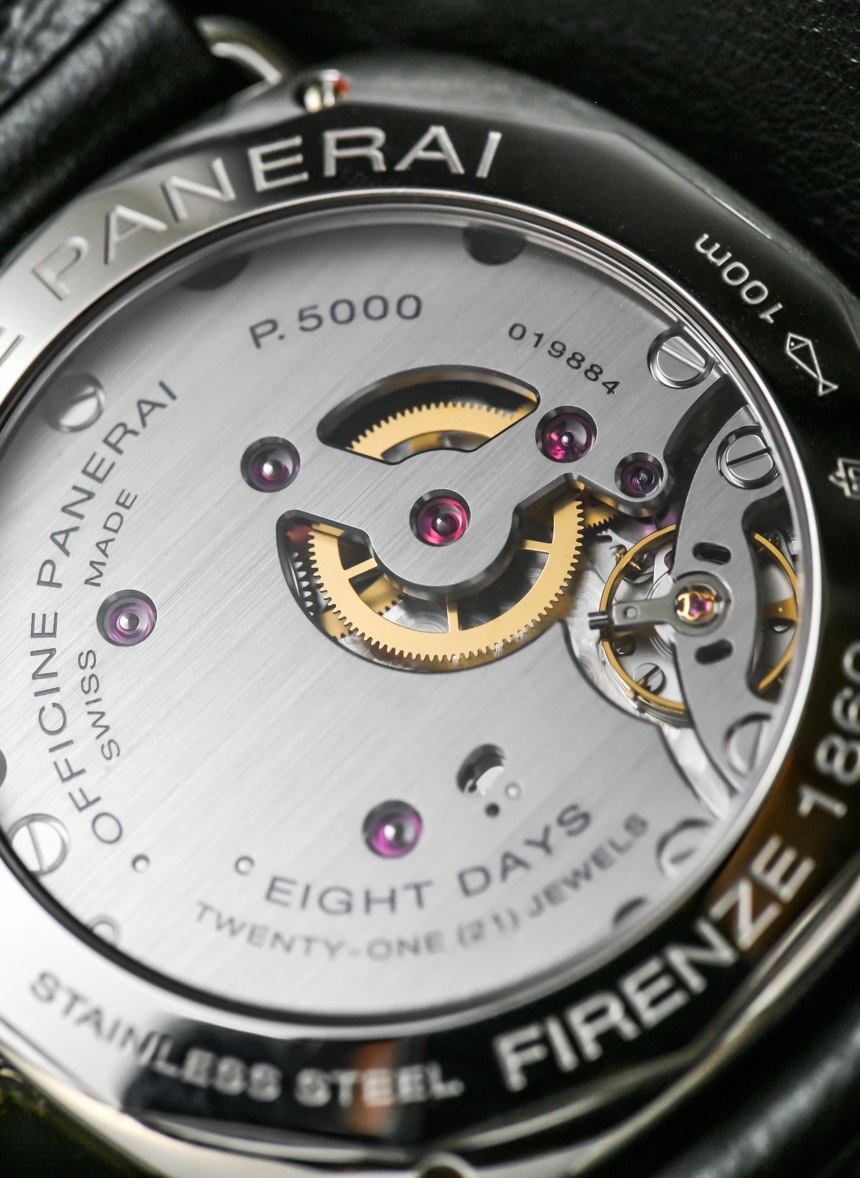 Produced from 127 components, the P.5000 is a decent in-house-made manually-wound workhorse that satisfies its purpose as being an attractive and industrial engine for some of Panerai’s most utilitarian watch designs in both the Radiomir and Luminor watch families. 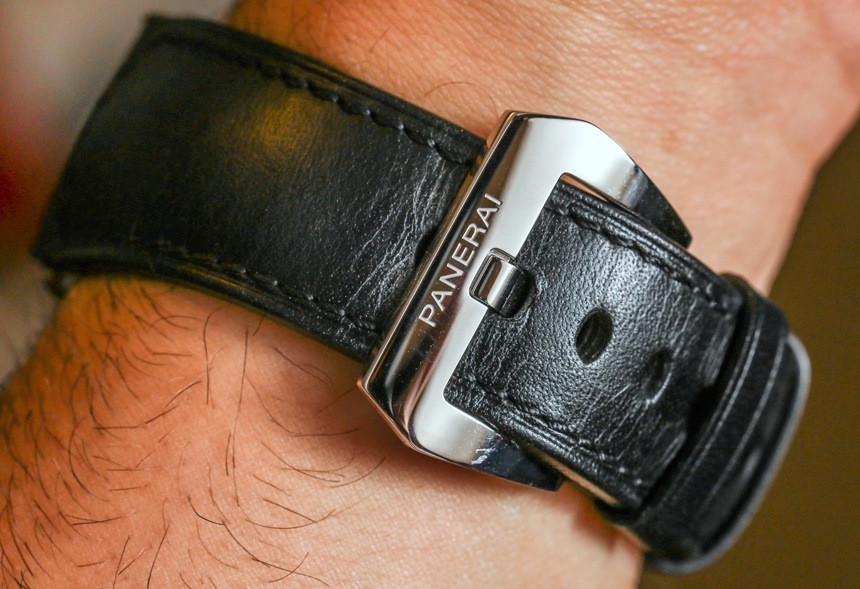