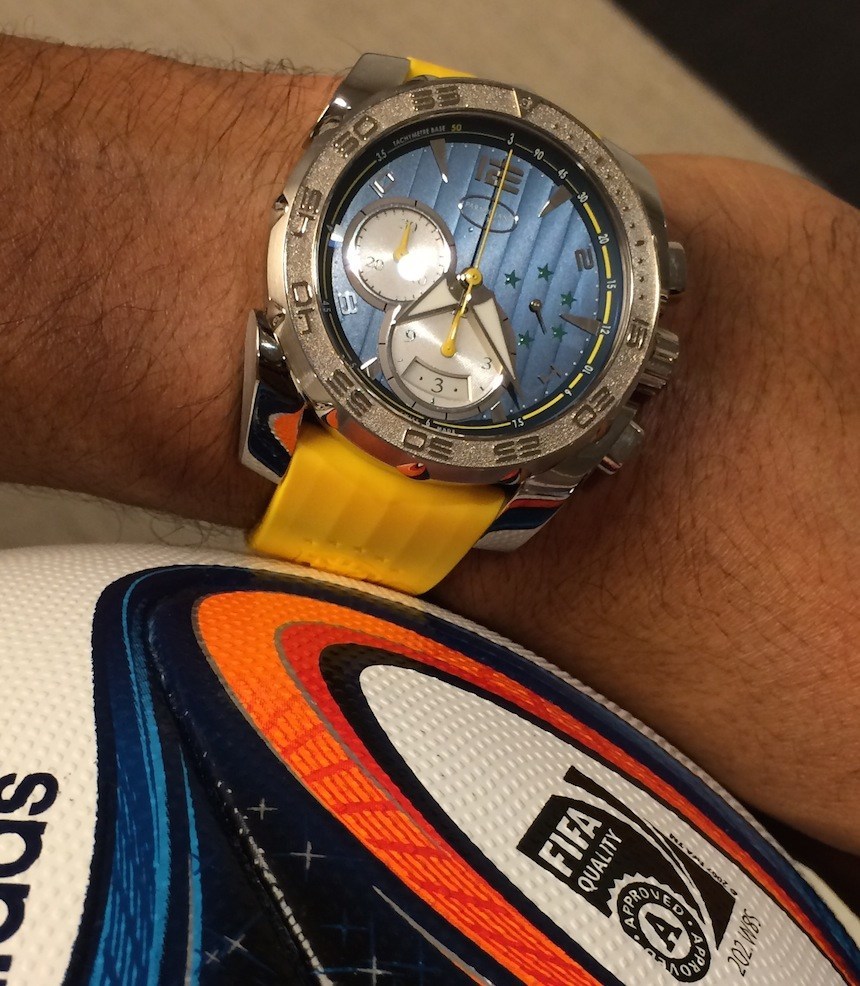 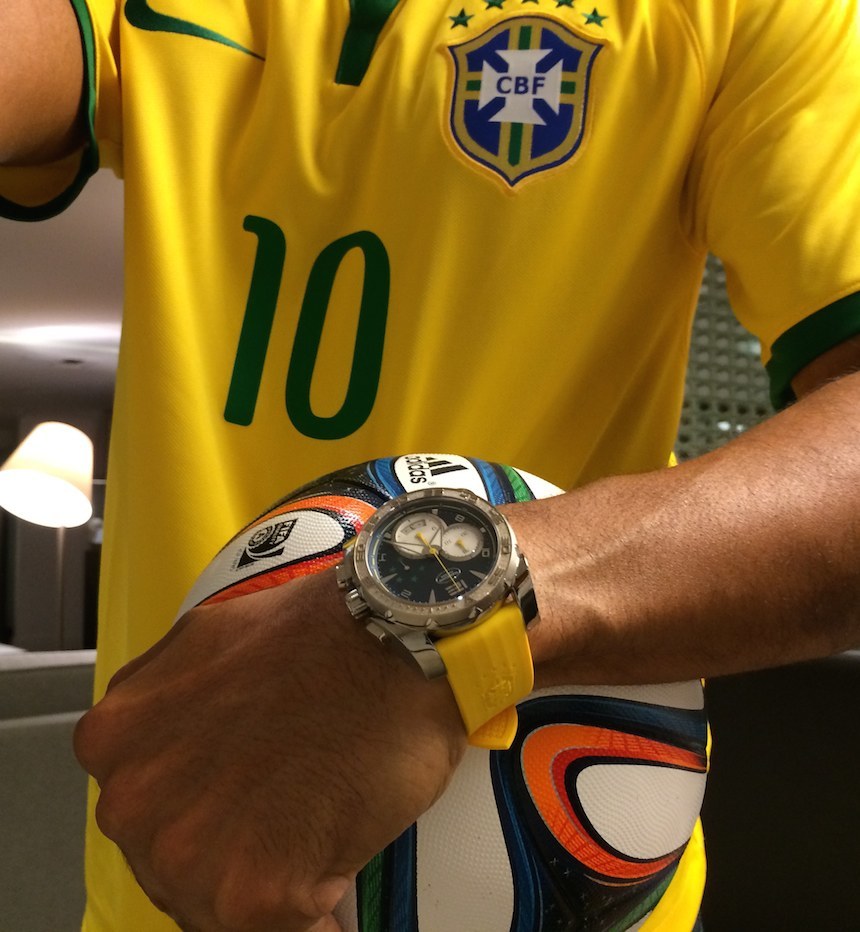 The World Cup is one of the few global events that unites us as humans sharing one small planet in a vast universe. Every four years, the nations of the world compete in a mostly friendly atmosphere in one country to see who will be crowned world champions of football, or futebol in Portuguese (or soccer, if you are in the US).

This global event is seen by almost every member of this planet of ours, and the passions run deep. As football is one of the rare sports that requires little equipment or special physical attributes to master, anyone and everyone can play. This democratic spirit is also reflected by the fact that every country in the world is mad about “the beautiful game” – and to see just how mad the watch world is about this occasion, check out our article comprising all noteworthy Watches Of The 2014 Brazil World Cup. 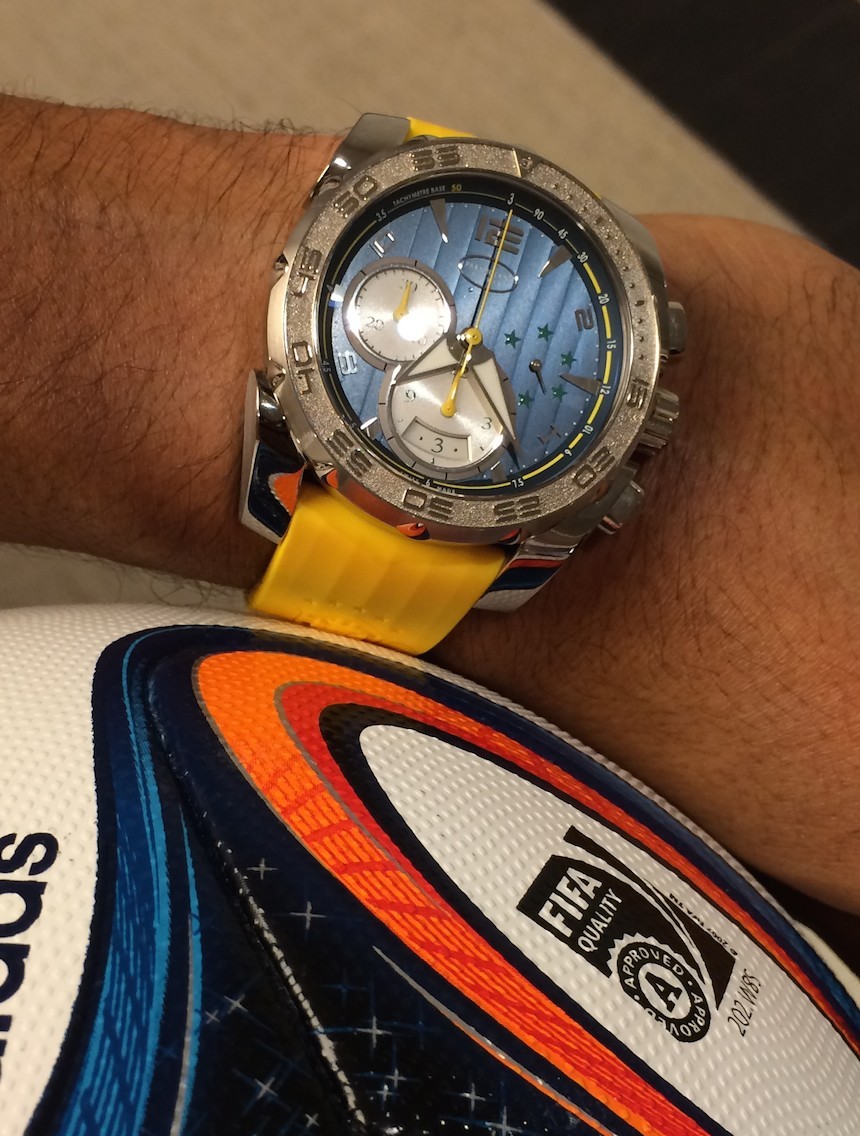 However, while the entire world loves football, perhaps no other country is more associated with the sport than this year’s host country, Brazil. Having been crowned world champions a record five times and having produced some of the most known, and arguably best players in the world (Pelé, Zico, Ronaldo, Ronaldinho, and the current virtuoso player Neymar Jr.), for Brazilians, football is not a sport – it’s a religion. 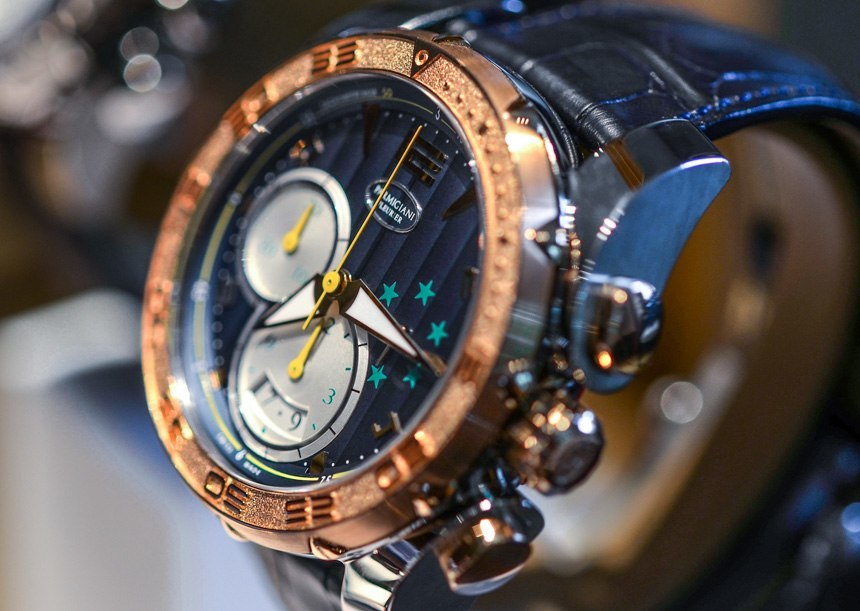 So it was without much hesitation that I answered the call and re-arranged my super-busy schedule for a thrilling trip to Brazil to enjoy the 2014 FIFA World Cup and the remarkable hospitality of Parmigiani Fleurier. It was especially exciting when I saw in the schedule that the marquee game we would be attending live was one of the last group games, featuring the USA vs Germany – a dream trip to cheer for my adopted home country of the USA against the football powerhouse Germany. 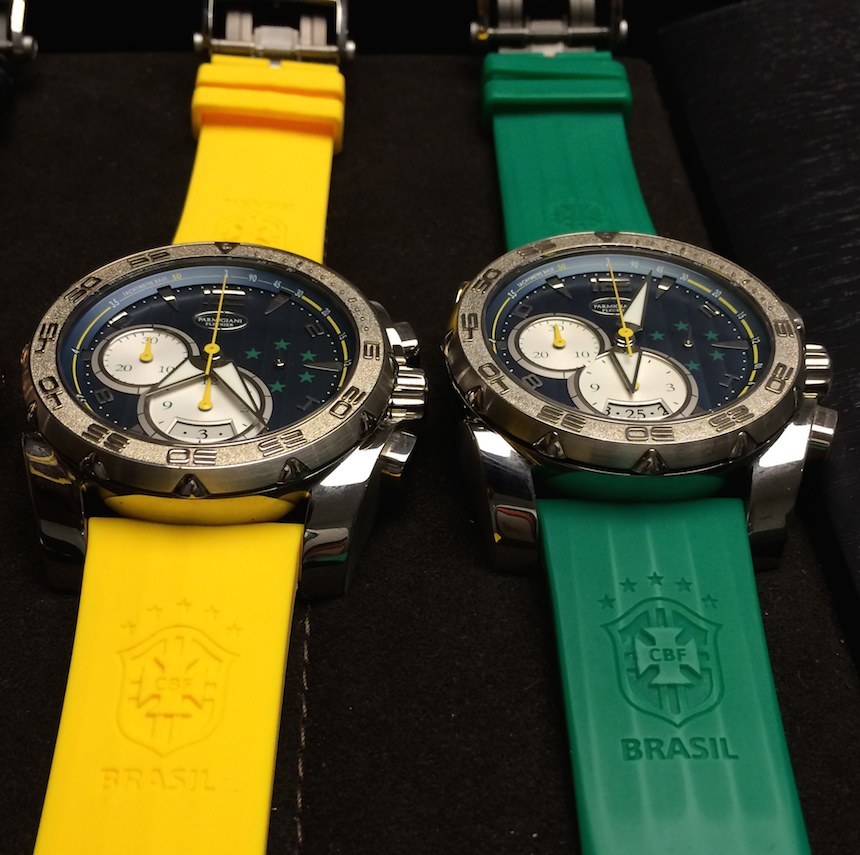 While Parmigiani Fleurier hosted a variety of guests in first-class fashion, their association with football, and Brazilian football in particular, is more important than one can see on the surface. Specifically, Parmigiani is the official watch provider for the CBF (Confederação Brasileira de Futebol, i.e. the Brazilian Football Confederation), and this is exhibited with a series of releases especially matching the legendary team’s colors. 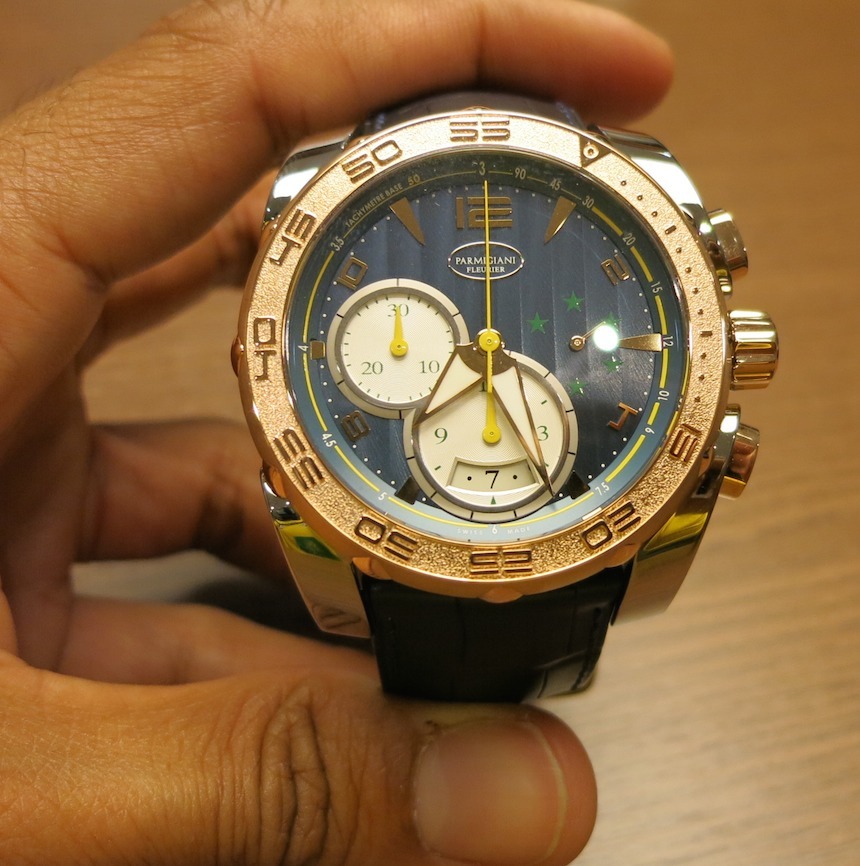 In São Paulo, the South American Manager for Parmigiani, Ruggero Mango, hosted me for a special visit to their offices, where I could get hands-on time with the Parmigiani Pershing CBF Chronograph watch. Unlike most other brands who tend to recycle their chronographs for a myriad of purposes, the Parmigiani Pershing is instead released with subsequent improvements. And for last year’s 005 model, also commemorating (I suppose) Brazil’s five championships, a special version for the CBF contains the in-house automatic chronograph PF334 with 50 hours of power reserve, encased in a manly yet light 45 mm titanium case. There are also options for white gold and pink gold bezels, and there is a ladies version in white, with a bezel encrusted with diamonds. 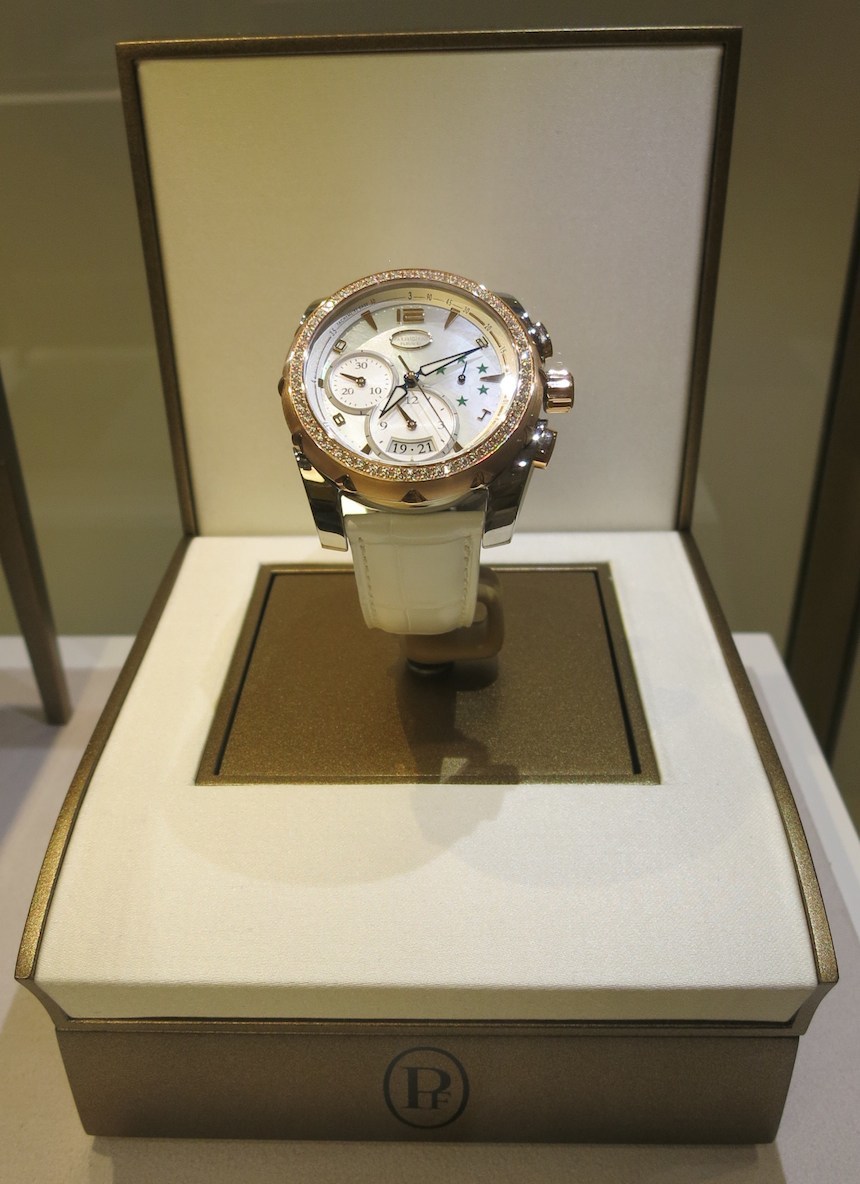 The association with the Brazilian national team is subtle but clear, and three main design cues bring that to the foreground. First, one of the tri-compax registers is encircled with five stars signifying each of Brazil’s five world championships. Next, the back of the watch has the engraved insignia of the CBF. And finally, perhaps my favorite aspect of the watch, is the choice of rubber straps matching the national colors of Brazil.

As a hardcore Brazil football team fan for many many years, I could not resist snapping a few pictures of the Parmigiani Pershing CBF Brazil Chronograph watch while wearing my Neymar Jr. Brazil jersey and holding the official FIFA game ball for 2014. 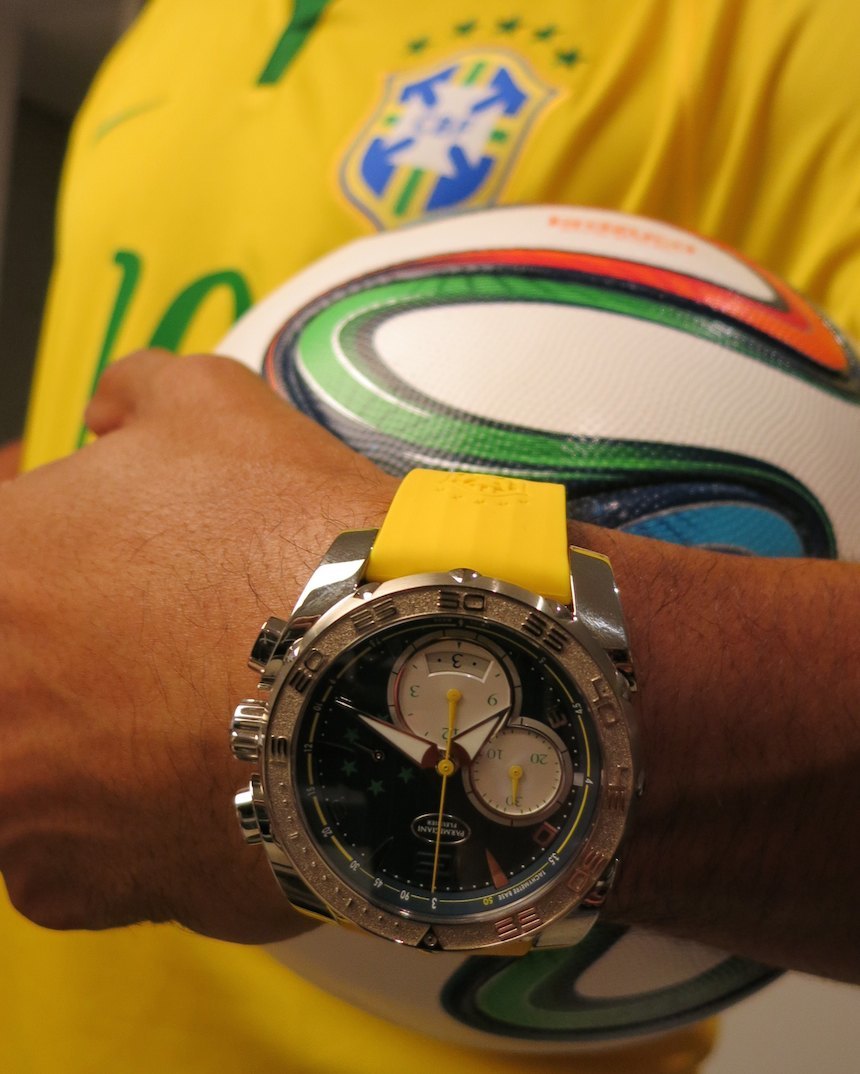 Sure, other watch companies have sponsored teams in the past and will continue to do so, and at this year’s cup, other watch companies have center stage at each game. But only one watch brand can claim to sponsor the most storied team in football and do so with a watch I would be glad to wear this year and any year thereafter. While Brazil’s exit on their home turf was not pleasant or expected, any fan knows that the true meaning of loving a team is doing so in good times and in hard times. Wearing a watch like the Parmigiani Fleurier Pershing CBF is representative of that love and a reminder to all that Brazilian football will be back stronger and better.

Football is forever, and with the Parmigiani Pershing CBF Chronograph watch, Parmigiani managed to create a piece that stands apart from the rest with design cues that evoke why we love the beautiful game. It’s simple, yet sophisticated, and full of passion. The base gentleman’s model with white gold or pink gold bezel has an MSRP of $25,000 in North America. parmigiani.ch