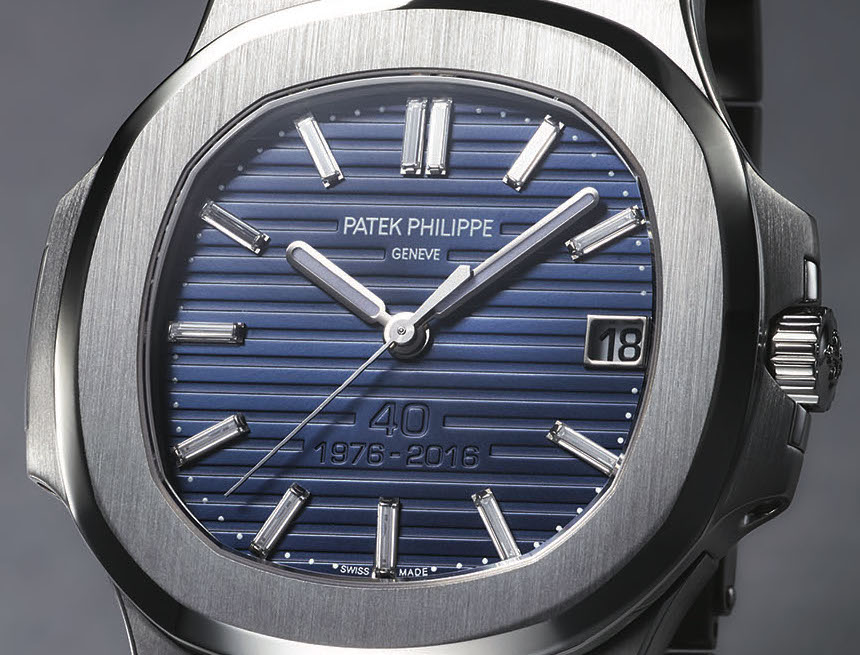 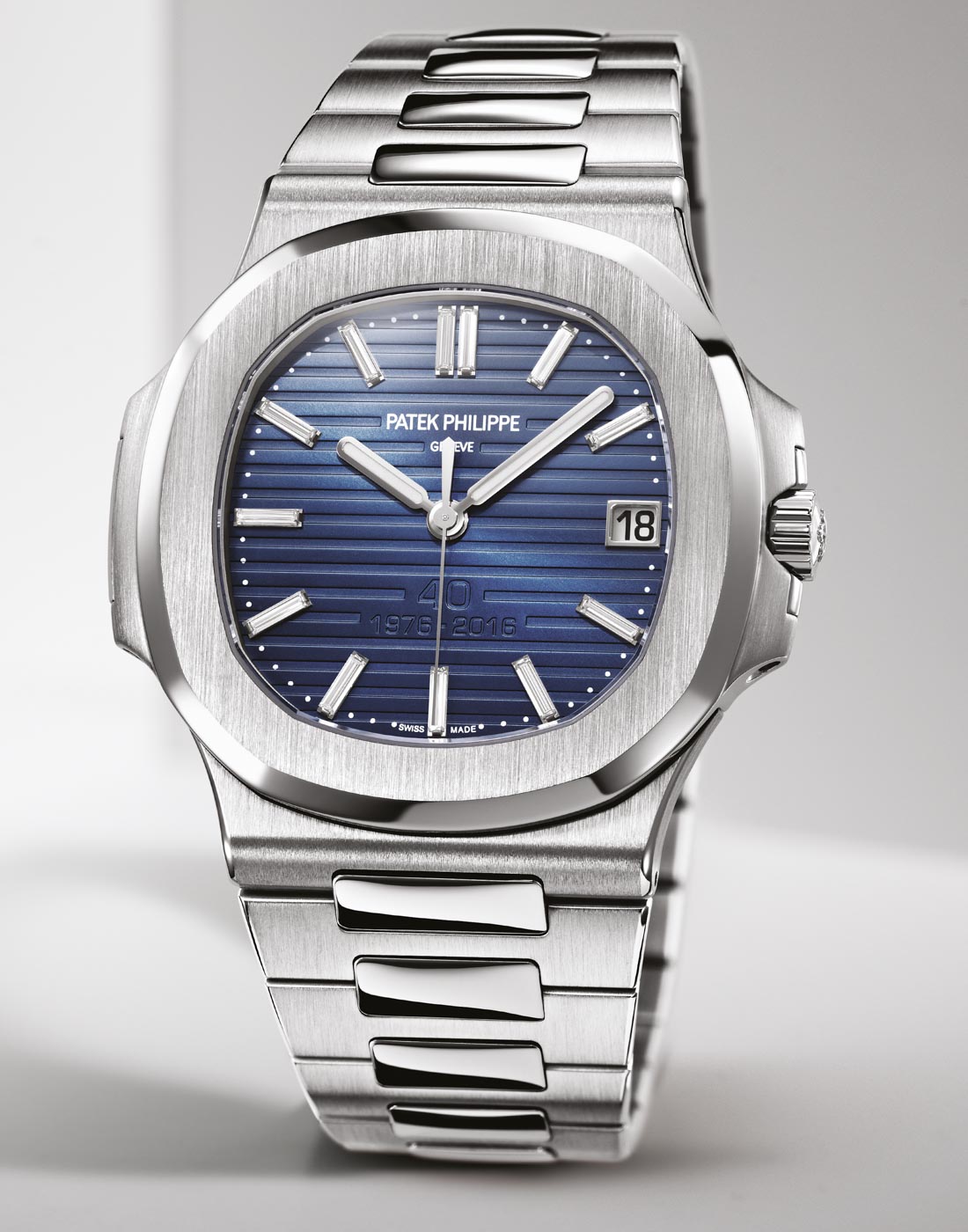 The Patek Philippe Nautilus 40th Anniversary 5711/1P, this somewhat more modestly sized three-hander joins the massive 49.25mm wide Nautilus chronograph reference 5976/1G to commemorate the Nautilus’ 40th anniversary. When Patek launched the Nautilus back in 1976 with the 3700/1A, its 42mm wide case quickly earned it its “Jumbo” nickname. Now, some four decades later, Patek had to one-up those figures and launch the 5711/1P in a 44.05 millimeter-wide, all-platinum case. Here’s all you need to know about it. 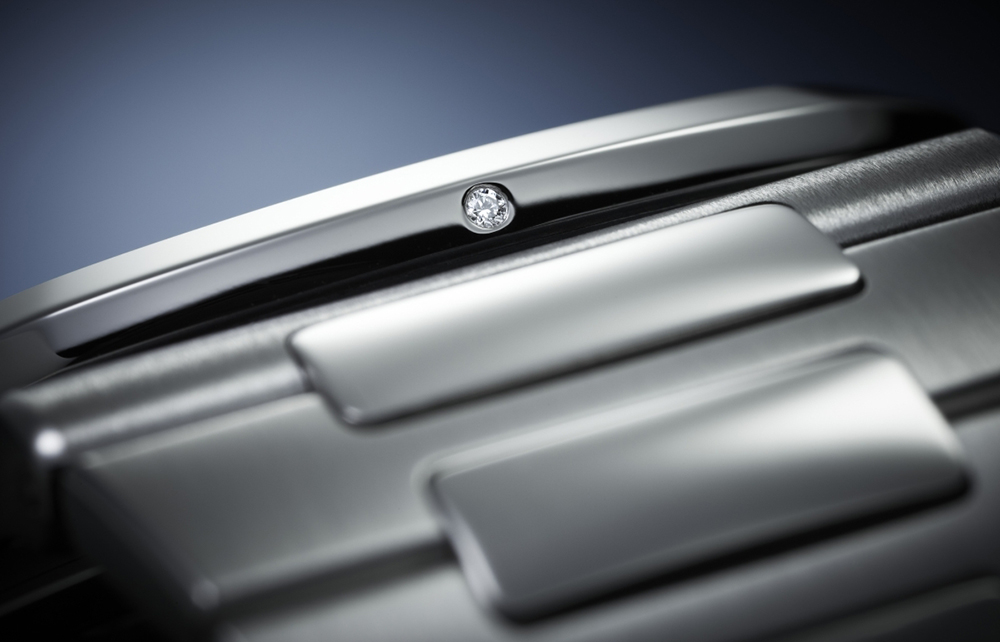 If the “P” in the reference number didn’t already give it away to all the Patek nerds out there, the 5711/1P features a small Wesselton (meaning rated very high on the purity/clarity scale) diamond set into its bezel at the 6 o’clock position, to mark that it is crafted from the most expensive precious metal typically used for Swiss luxury timepieces. The bracelet, which has hardly changed since the first Nautilus in 1976 and is a hallmark of the original Gerald Genta design, is also totally in platinum with brushed links and polished center links. 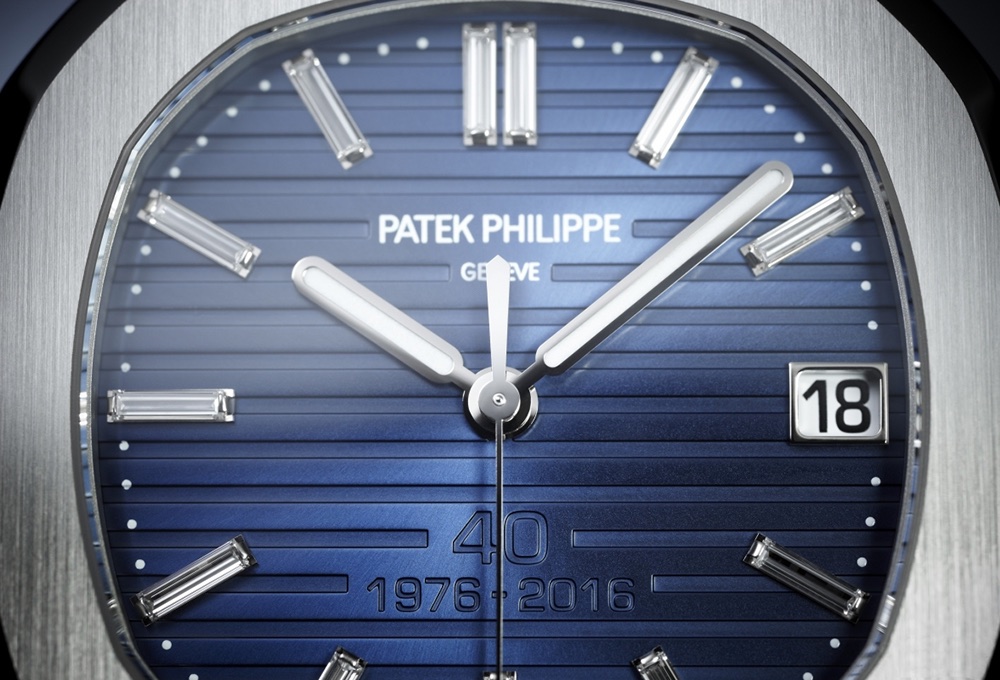 The large-seeming 44.05mm diameter is the case measured at 9 to 3 o’clock, including the crown. The measurement from 10 to 4 o’clock, which excludes the crown protectors and the the corresponding “ear” on the left of the case, on the other hand, is only 40mm and lug-to-lug the Patek Philippe Nautilus 40th Anniversary 5711/1P is also a very wearable 44 millimeters (to give you an idea, most round watches with a diameter of 42 millimeters measure 49 to 50 millimeters lug-to-lug). This is how a 44mm case can actually not wear so big. The water resistance rating has not changed much in 40 years either and remains at 120 meters. 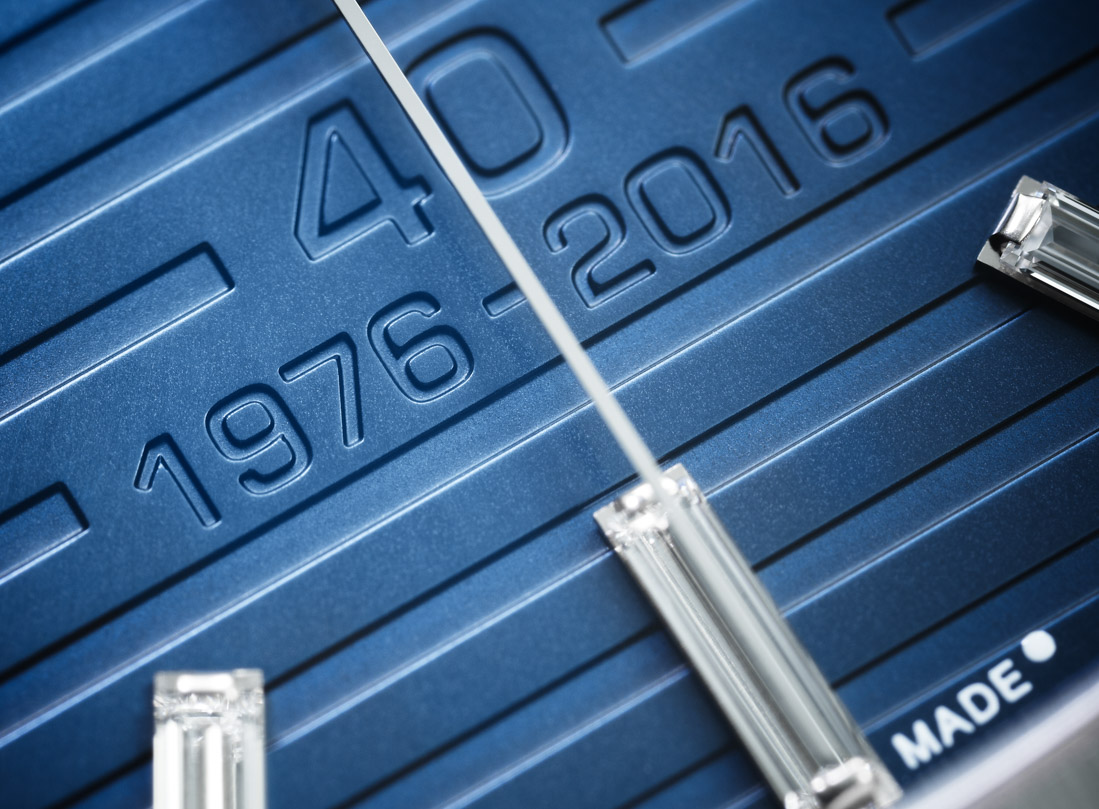 In addition to the platinum case and bracelet, the baton-style hour and minute hands in 18k white gold (the seconds hand is rhodium plated brass) and some large, baguette-cut hour indices on the dial add that extra bit of glamour to the blue “garage door” dial of the Patek Philippe Nautilus 40th Anniversary 5711/1P. The dial is PVD blue-treated 18k yellow gold, and the “40” above the “1976-2016” is a little less prominent and disruptive than on the 5976/1G chronograph. Blue has always looked good for the Nautilus. 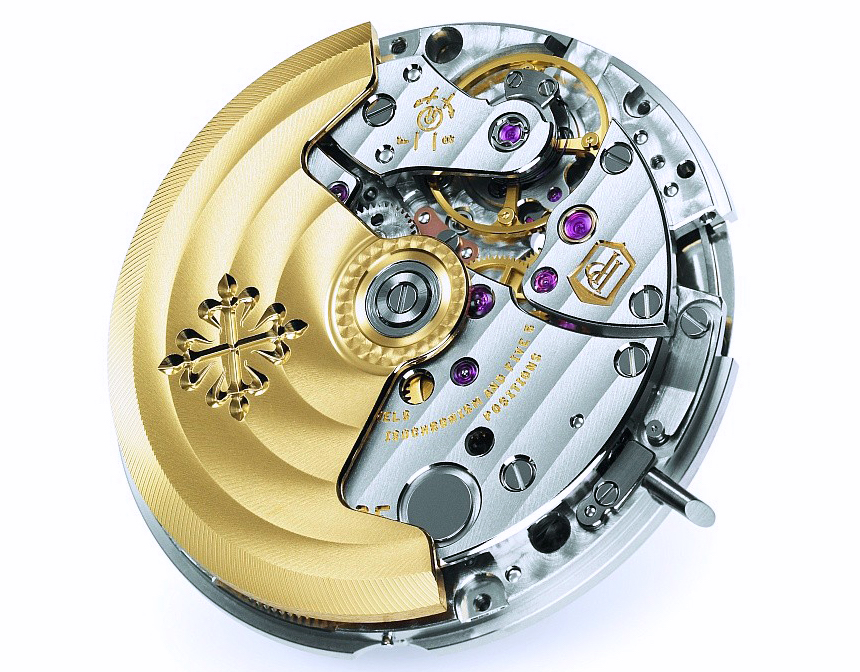 The movement inside is the Patek Philippe automatic 324 SC which has powered a host of Nautilus and other watches. It features the time with central seconds and the date, here at 3 o’clock on a white date wheel, along with other standard Patek fare such as a Gyromax balance wheel, Spiromax hairspring and, of course, the Patek Philippe Seal. Despite all these goodies, power reserve is rated to fall in between 35 and 45 hours, which is only acceptable because the 324SC is a mere 3.3 millimeters thick with the 21 karat gold rotor included – though we are still not sure what may be causing 10 hours of approved variation in a movement without a chronograph or complicated calendar complication. 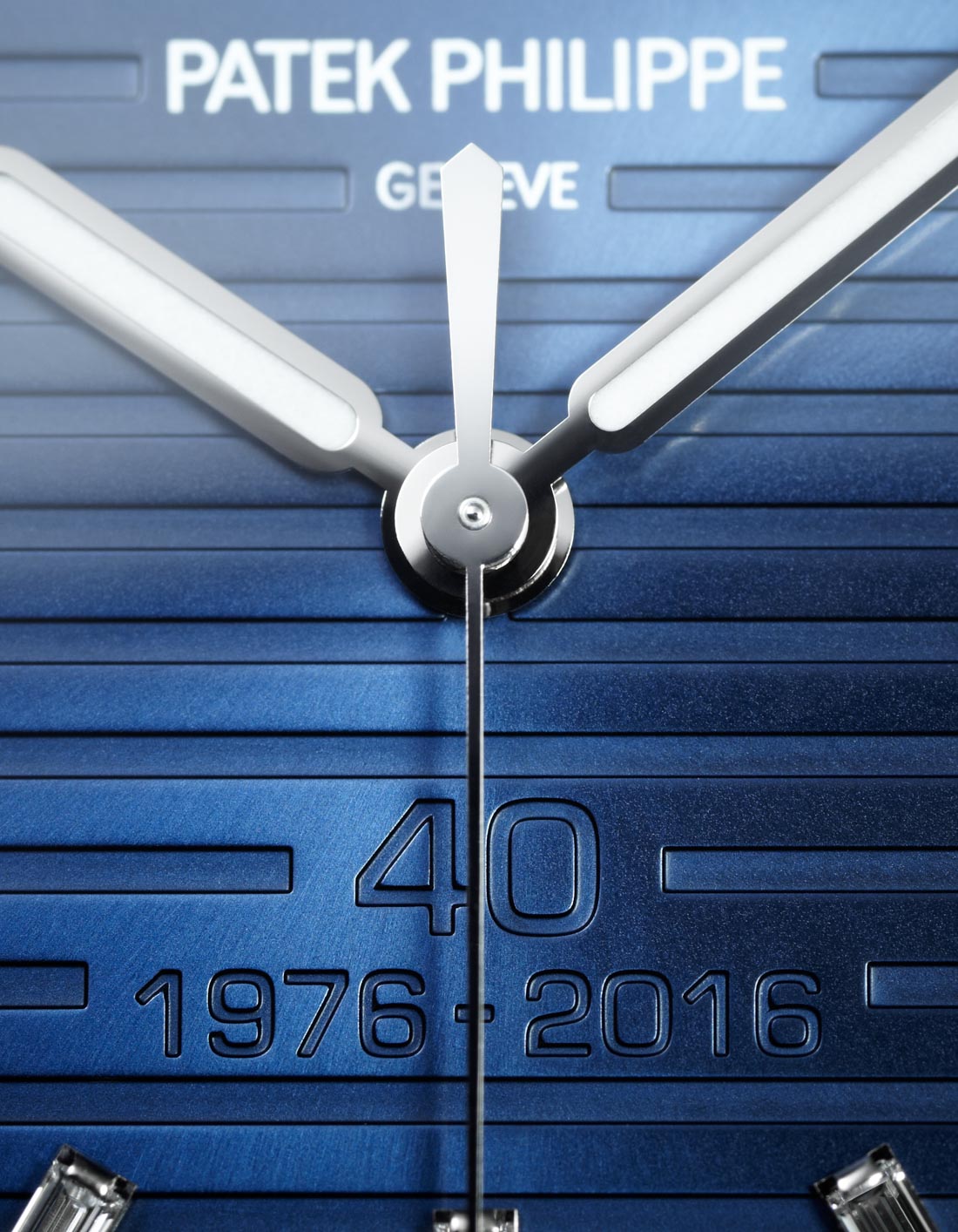 We briefly noted some of the Nautilus’ history when discussing the 5976/1G, but 40 years is relatively recent in the brand’s more than 175-year history. At this point, we are beyond the irony of a platinum version of a watch that represented luxury steel sports watches, which itself was ironic. A cool “throwback” to historical features is the return of the brown natural cork box, an authentic
replica of the stylish 1976 original. Like the original Nautilus, it is to evoke vivid associations with the proud ocean liners that inspired the porthole design of the casually elegant timepiece. The 40th Anniversary cork box features polished stainless steel frames for the base and the hinged cover, as well as a steel plaque on the front side, also a faithful replica of the 1976 original. 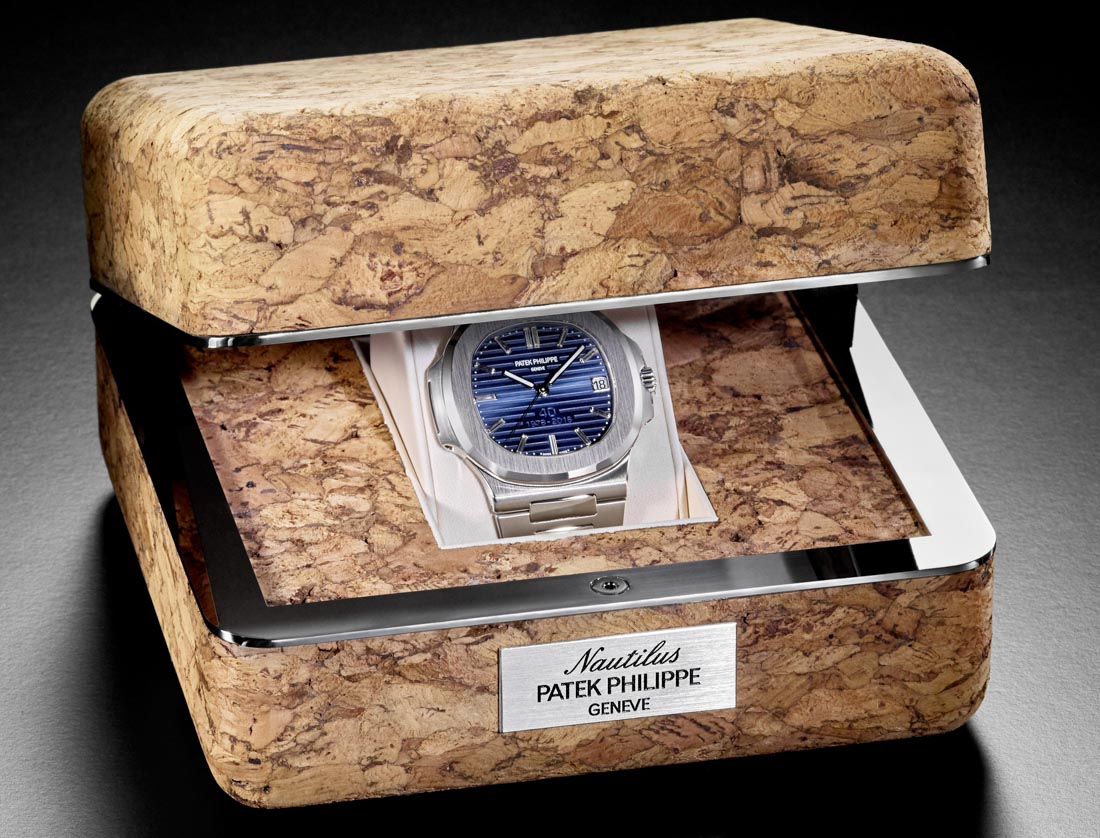 Limited to “only” 700 pieces, price for the Patek Philippe Nautilus 40th Anniversary 5711/1P in platinum will be $113,400 USD each – that is more, than the white gold (and clearly more complicated) flyback chronograph 5976/1G. patek.com