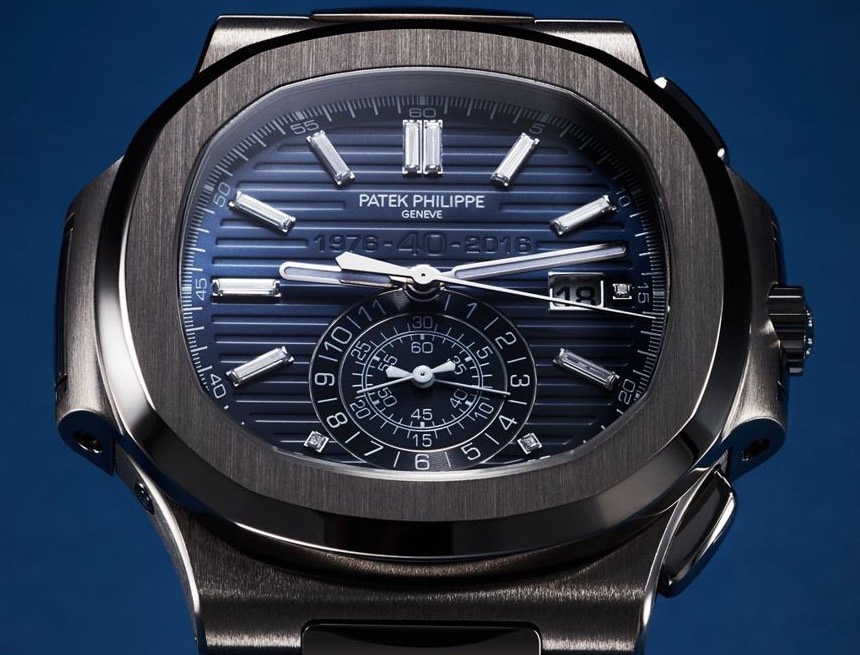 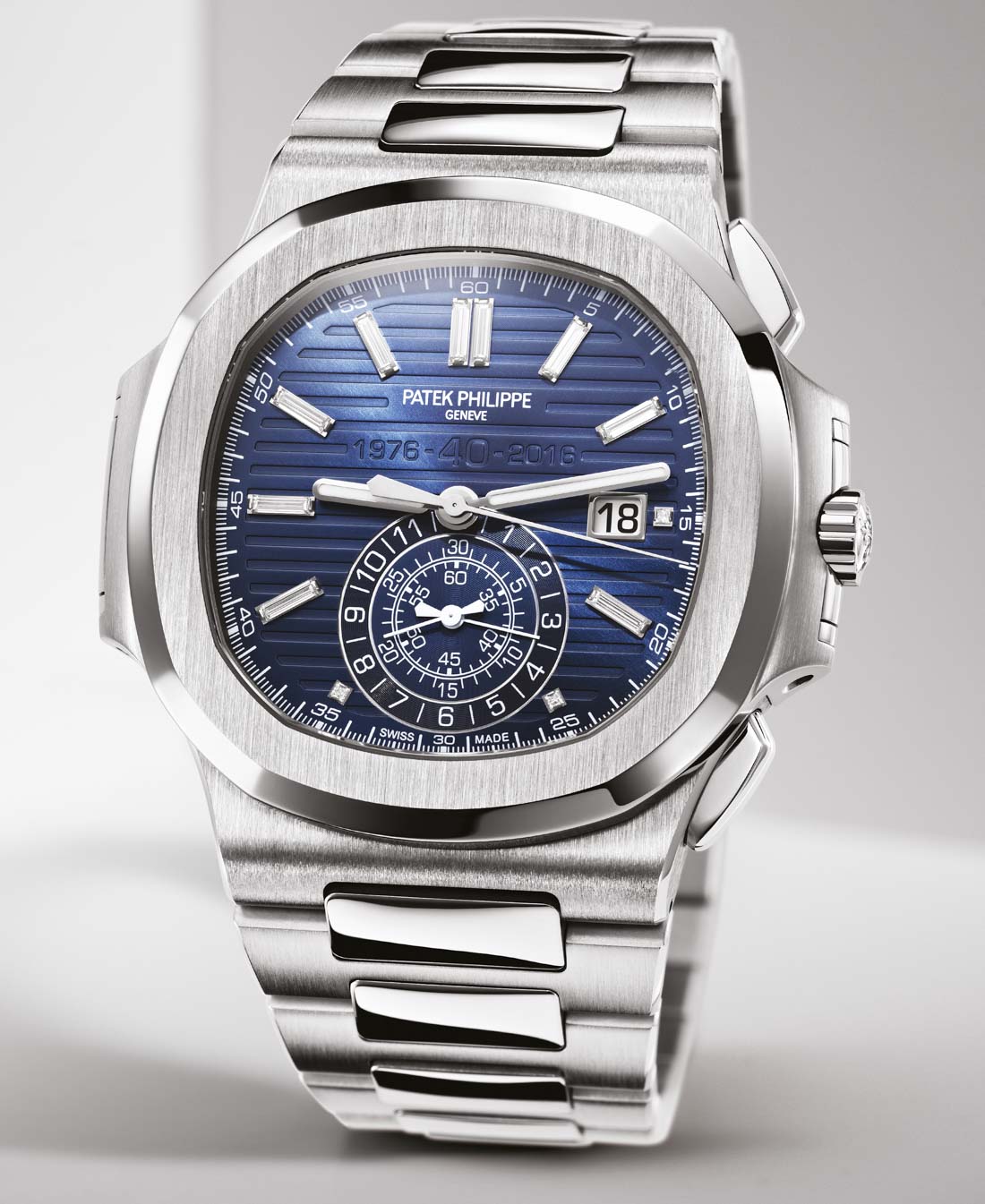 In 2016, the Patek Philippe Nautilus watch collection turns 40 years old, and a lot of the brand’s fans have been wondering what the important luxury Swiss watchmaker would come up with to mark the occasion. Today, we know the answer to that, and it is very large, gold, fitted with diamonds, and surprisingly not costing more than $100,000. For those who appreciate Patek Philippe for its mostly conservative sizes and understated design… you might want to wait for another anniversary. This limited edition item is a watch which is all about celebrating luxury watches of the modern era – and that means lavish appointments, large sizes, sporty looks, and unapologetic ostentation. So, without any more delay, here is the highly anticipated Patek Philippe Nautilus 40th Anniversary 5976/1G. The UK’s GQ Watch And Jewellery was given an early hands-on look here. 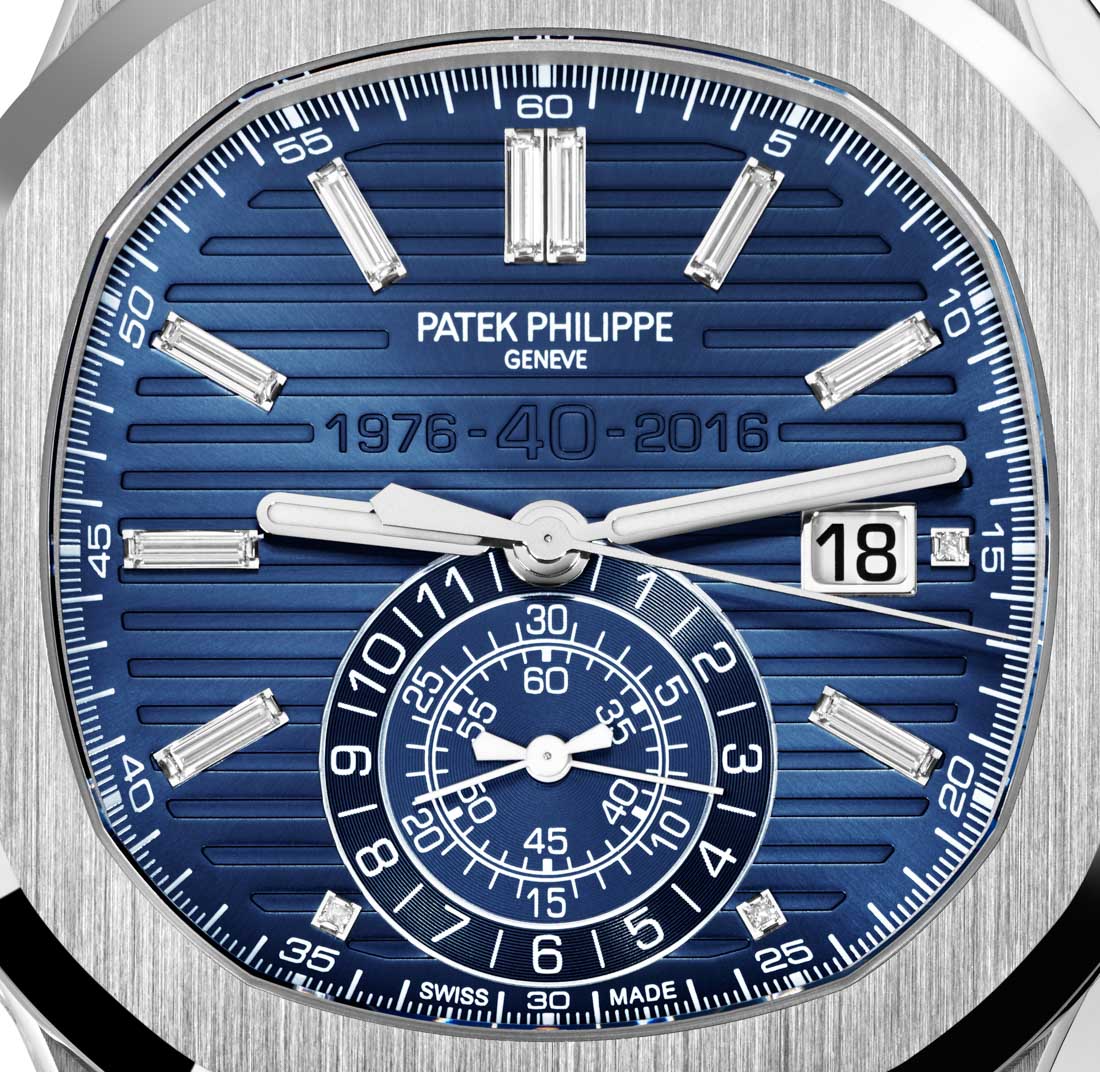 You have read that right in the title, the Patek Philippe Nautilus 40th Anniversary 5976/1G will come in a massive, 49.25-millimeter-wide, 18-karat white gold case – and it will be limited to 1,300 pieces. 50 millimeters wide, no matter how you look at it, is large not just for a Patek Philippe watch, but any modern luxury watch. Things do look a bit different when considering the 10-to-4 o’clock diagonal measurement of the case which is a more reasonable 44 millimeters, while lug-to-lug the 5976/1G measures in at 49.60 millimeters. That’s the kind of lug-to-lug size that most 42 millimeter-wide round watches have, so wearability should be sort of OK – but the wrist-presence will still be more than substantial (and incomparable to most other Patek watches). 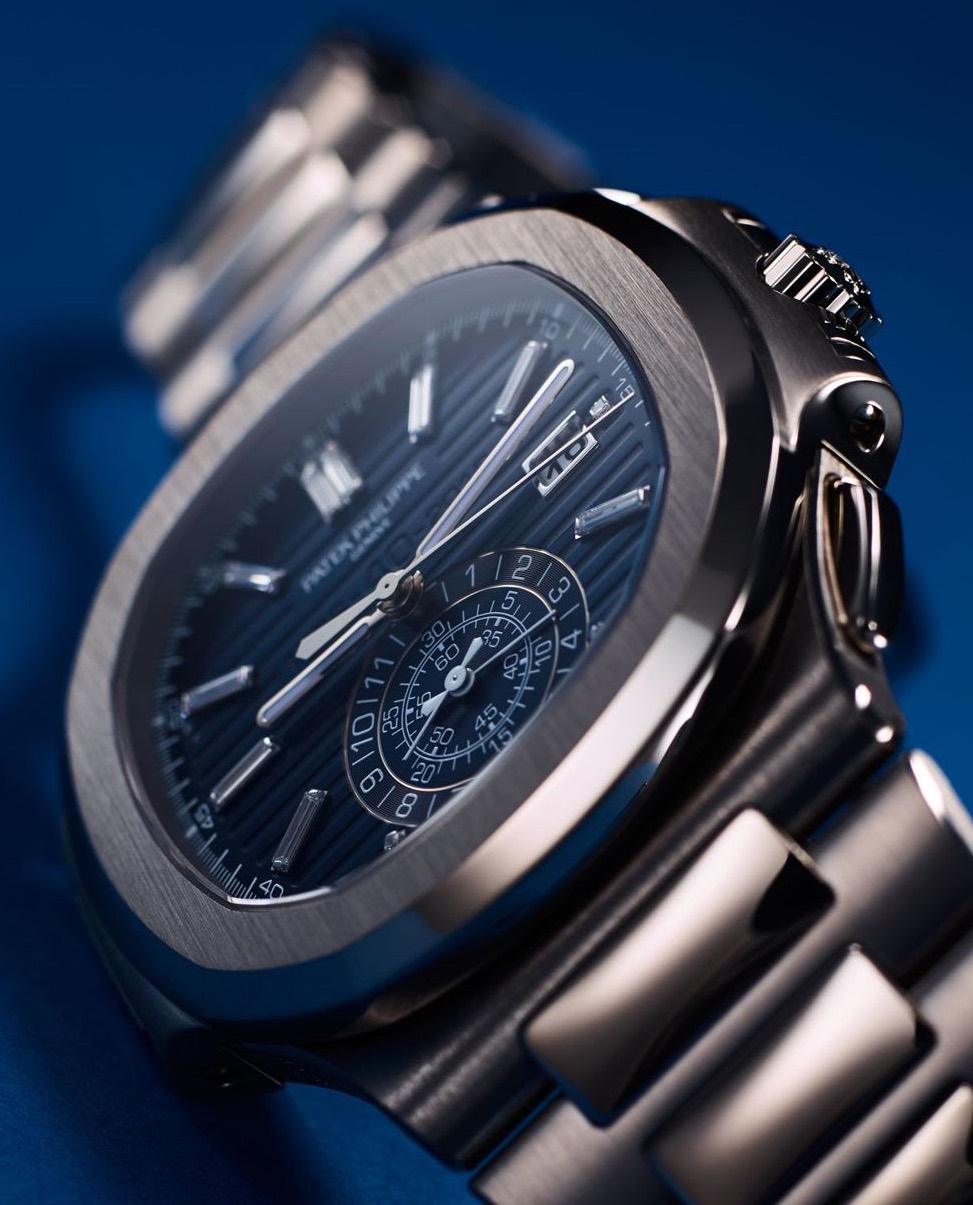 Sure, the Nautilus name and the nickname “Jumbo” do go hand in hand ever since the mid-1970s, but at near 50 millimeters in diameter, the new Patek Philippe Nautilus 40th Anniversary 5976/1G takes it to the next level. In other words, when Patek Philippe originally debuted the Nautilus with reference 3700/1A in 1976, its 42mm size quickly earned it its “Jumbo” nickname – because at the time that was huge for a watch.

Its purpose was a thematic follow-up to the Audemars Piguet Royal Oak (from 1972) which started the era of the luxury steel sports watch. Both the famed Royal Oak and the Nautilus were designed by the late iconic watch designer Gerald Genta. Yes, we know this watch is not in steel, but it sure doesn’t have to be given what Patek Philippe is trying to do with it. 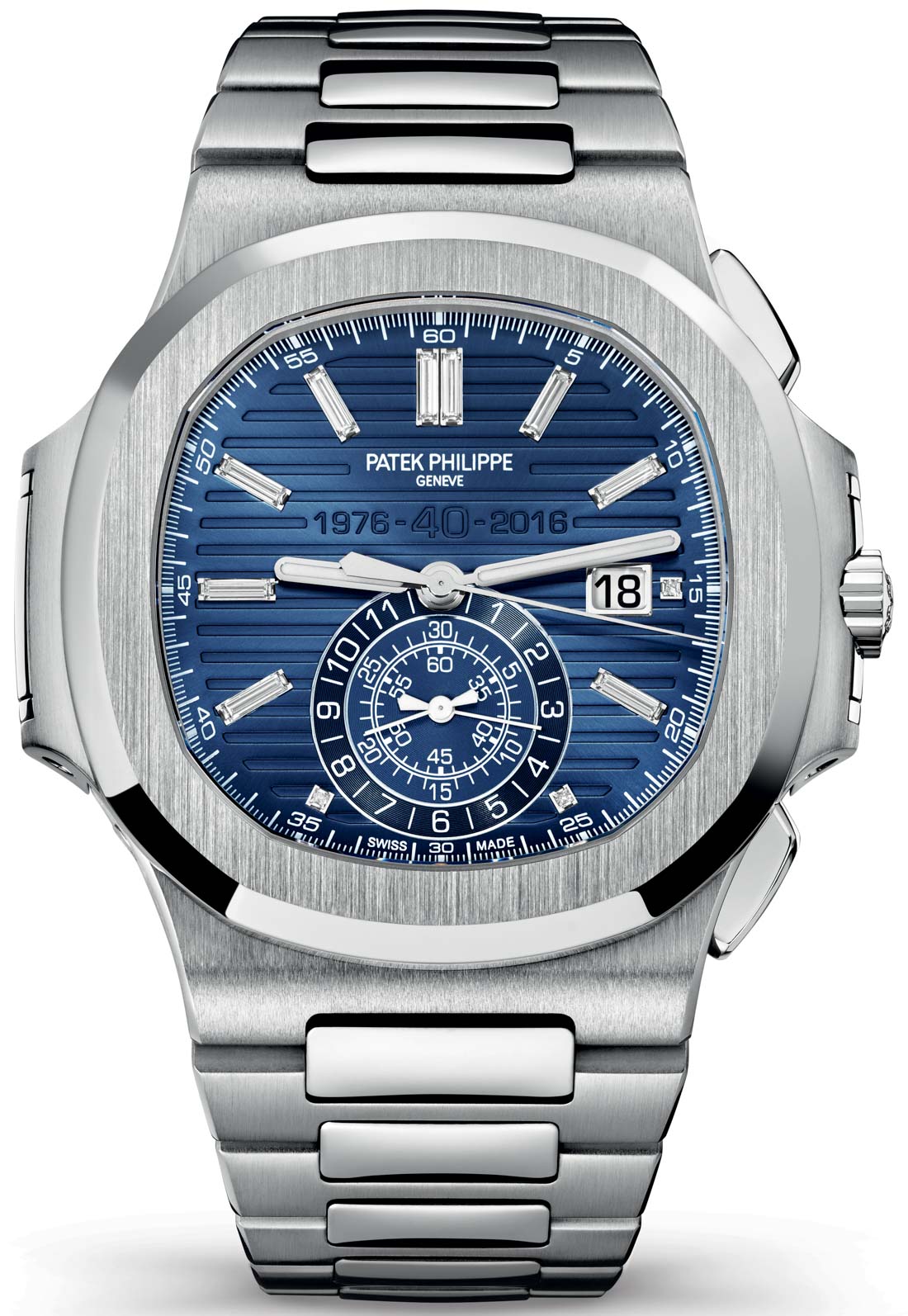 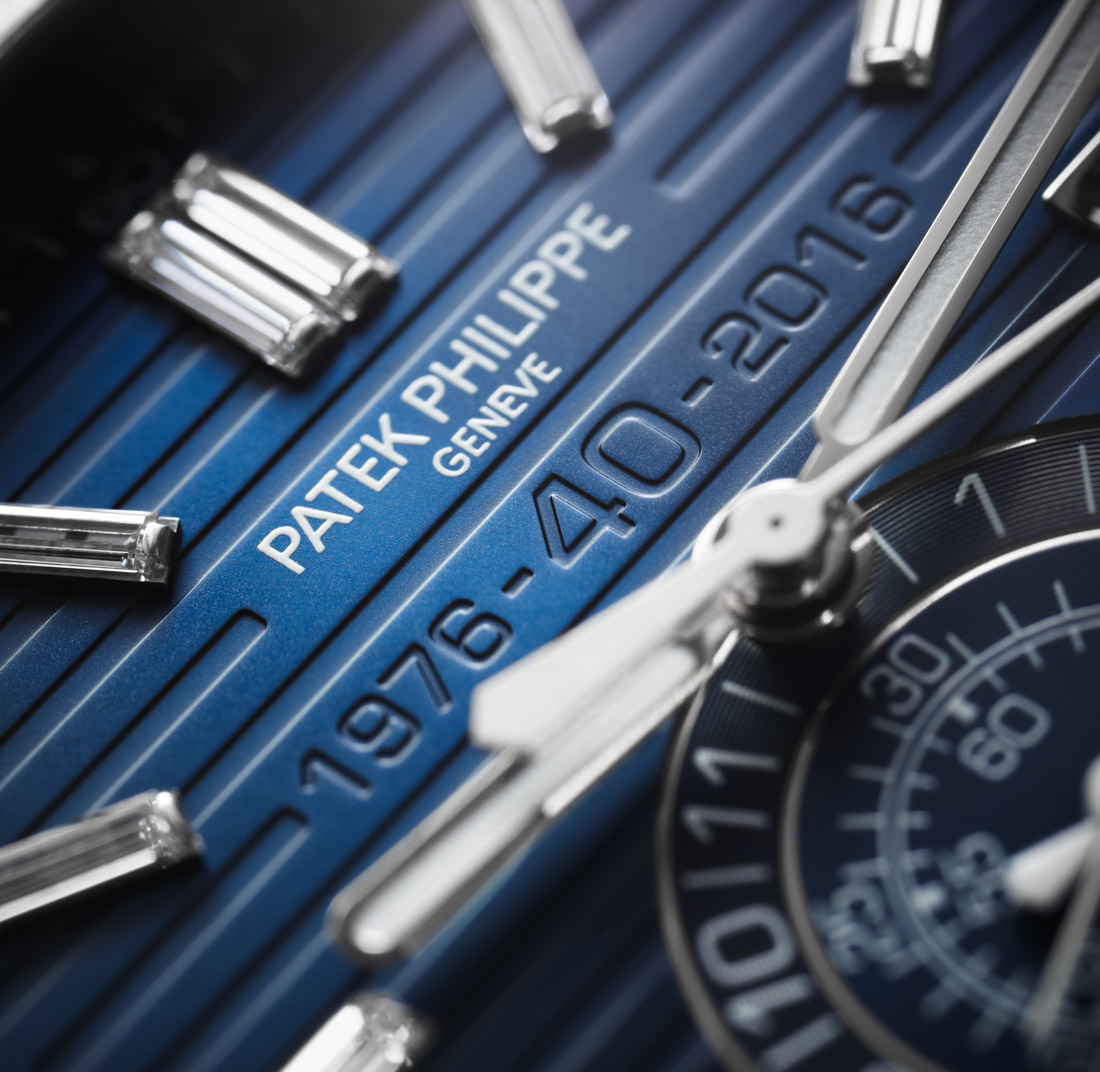 Speaking of design decisions die-hard fans of Patek Philippe may object to is the dial design and its “1976–40–2016” text reminiscent of a grammar school math equation, embossed smack bang in the middle, overpowering the subtle Patek Philippe Genève branding just below the 12 o’clock index. This is a design decision we can’t really love, but at the same time I don’t think it will be a deal breaker for fans who want one of these bad boys. 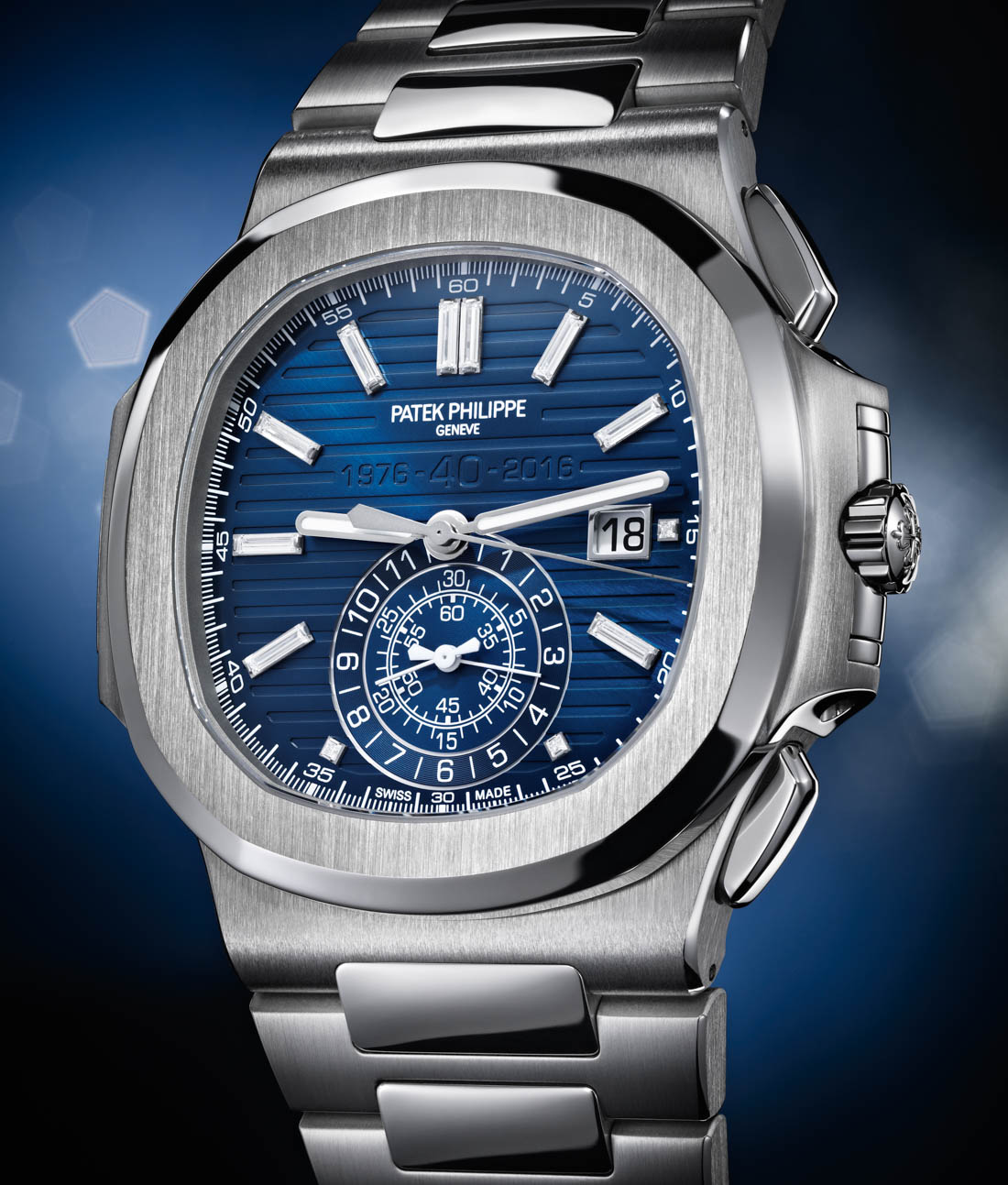 A short but confusing history lesson: 10 years ago, when Patek Philippe launched the 30th anniversary Nautilus chronograph reference 5980, they based it on the 5960 annual calendar – but have removed the calendar function. For this year’s 40th anniversary piece, the new Patek Philippe Nautilus 40th Anniversary 5976/1G appears to be based on the watch (above), the updated 5960. A key difference to note is that on the 6 o’clock sub-dial for the 12-hour chronograph, the hour scale has been moved to the outer periphery of the sub-dial, while the 60-minute counter is on the inside. Compare this with other Nautilus chronographs and you’ll find the inverse is true. 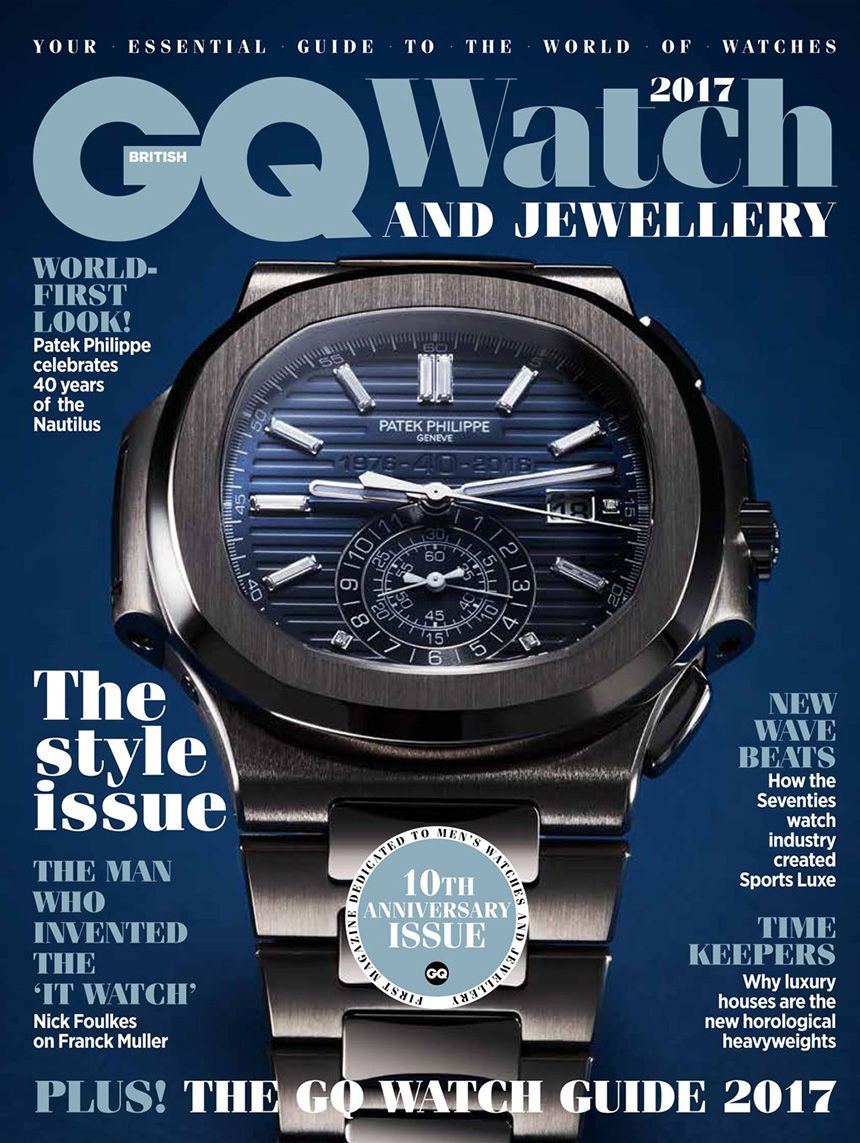 The movement inside the limited-edition Patek Philippe Nautilus 40th Anniversary 5976/1G is Patek Philippe’s CH 28-520C flyback chronograph caliber with automatic winding and a date at 3 o’clock. Running at 4 Hertz, the CH 28-520C provides between 45 and 55 hours of power reserve, replenished by a 21k gold automatic winding rotor. A lesser known fact is that this caliber is modular but like most other chronographs with a date: here the base caliber (that is 5.2 millimeters thick) features the basic timekeeping and chronograph functions, with a 1.43mm thick calendar module placed on top. The sub-dial and date windows do cut some of the baguette indices in half, leaving it to smaller princess-cut diamonds to fill up the remaining space. 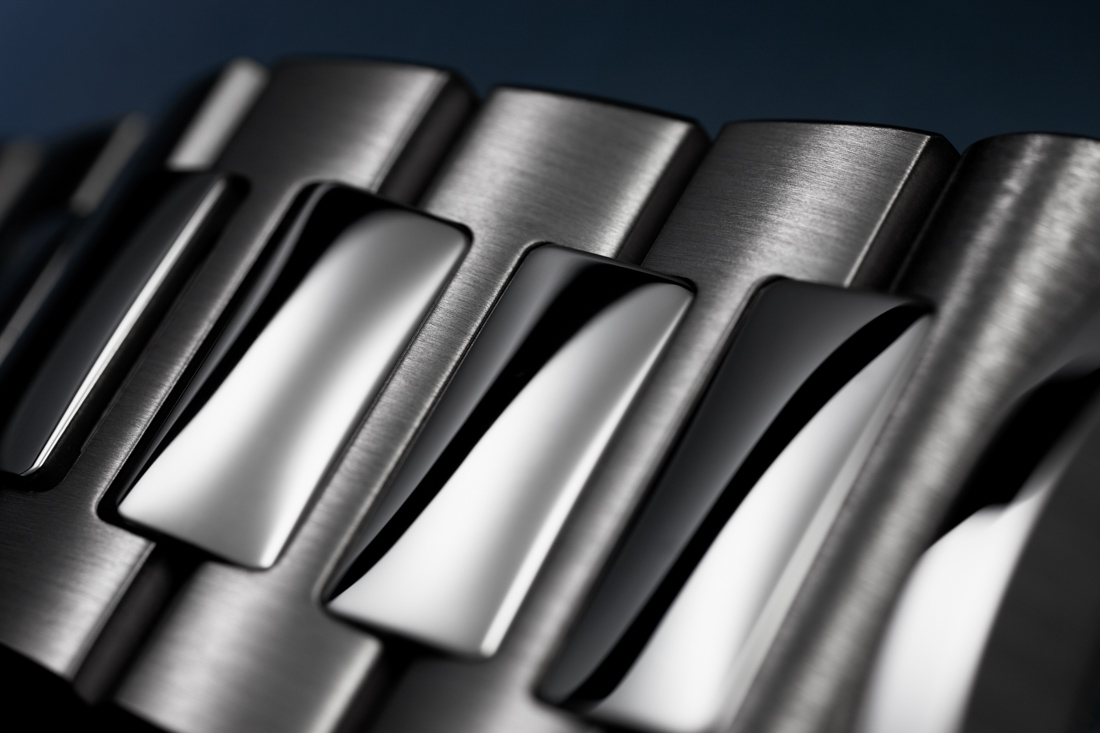 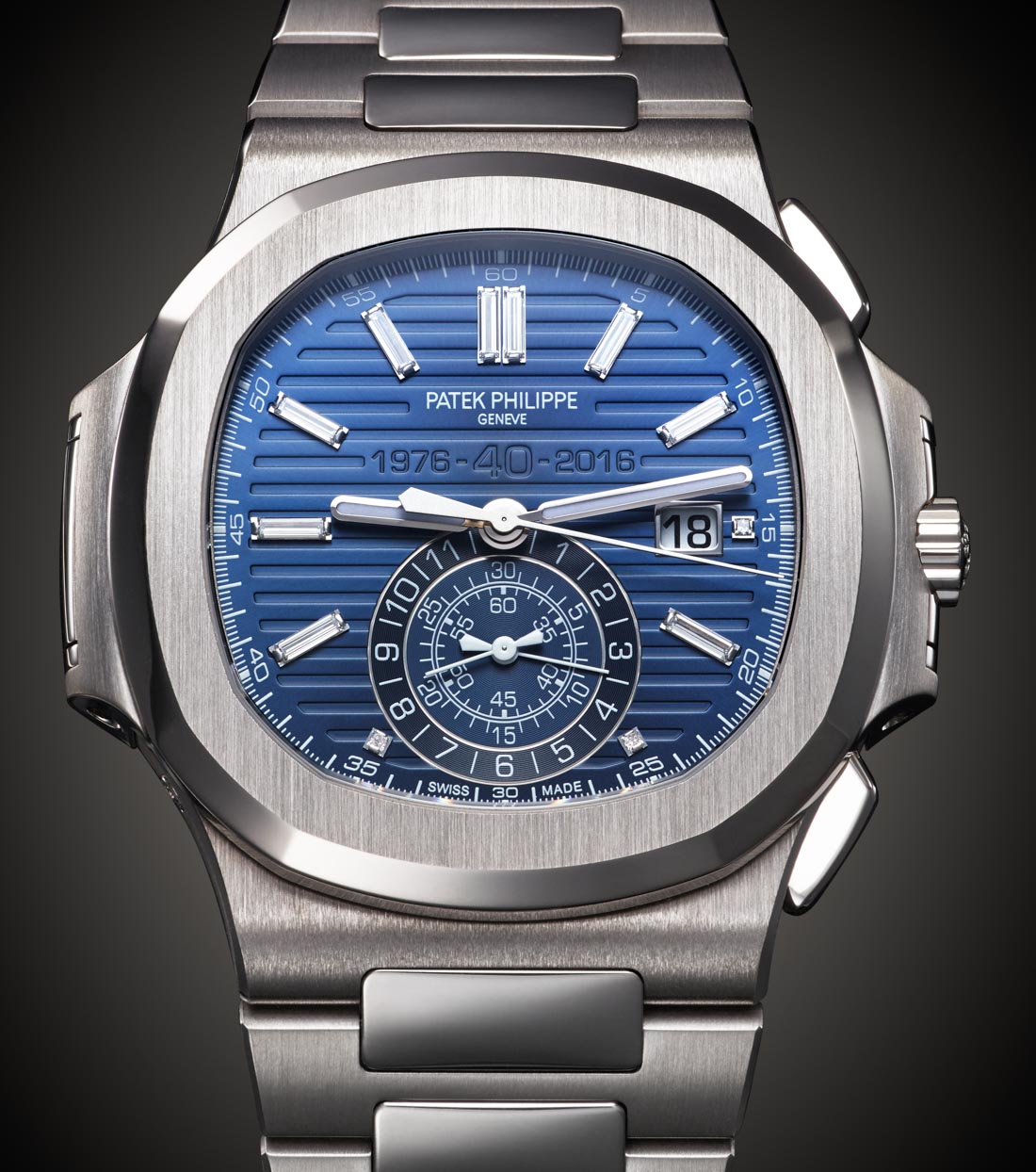 Speaking of diamonds and a full white gold case, one last surprise is the cost. Beyond the unexpectedly large size and equally untypical and bold (for Patek) dial text – is the price for the Patek Philippe Nautilus 40th Anniversary 5976/1G, which will be £69,960 or  $96,390 USD. patek.com