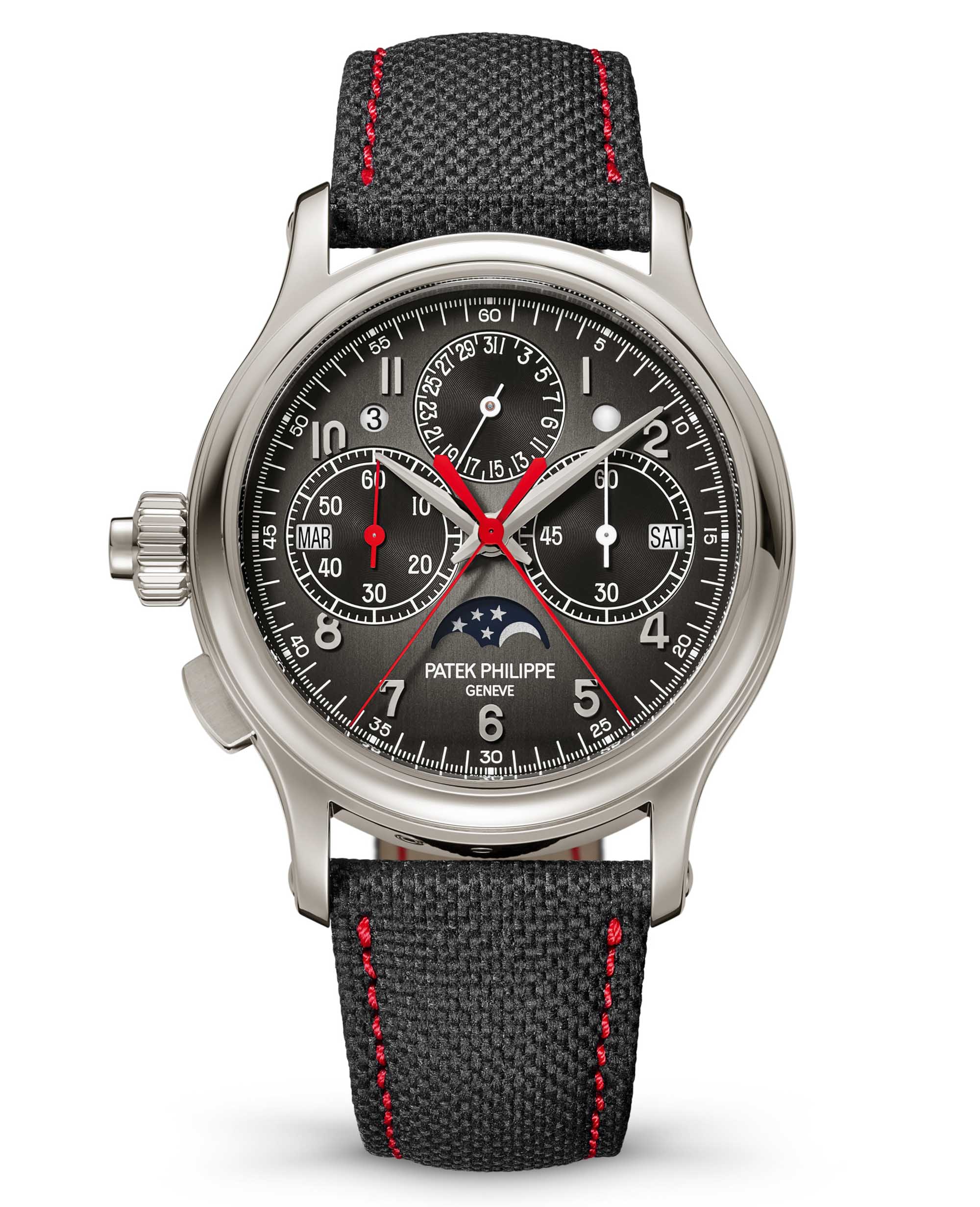 Although left-handed people only make up about 10% of the total population, there has been quite a lot of attention on left-handed watches this year, and adding to the list of left-handed models released by blue-chip luxury manufacturers in 2022 is a new split-seconds monopusher chronograph with a perpetual calendar from Patek Philippe. Inspired by a one-of-a-kind piece with a cushion-shaped case that was created by the brand in 1927, the new Patek Philippe Split-Seconds Monopusher Chronograph Perpetual Calendar ref. 5373P-001 reimagines the existing ref. 3572 with an inverted dial layout and pusher configuration to create a unique timepiece with a solid platinum case that is specifically designed to be worn on the right-hand wrists of left-handed people. 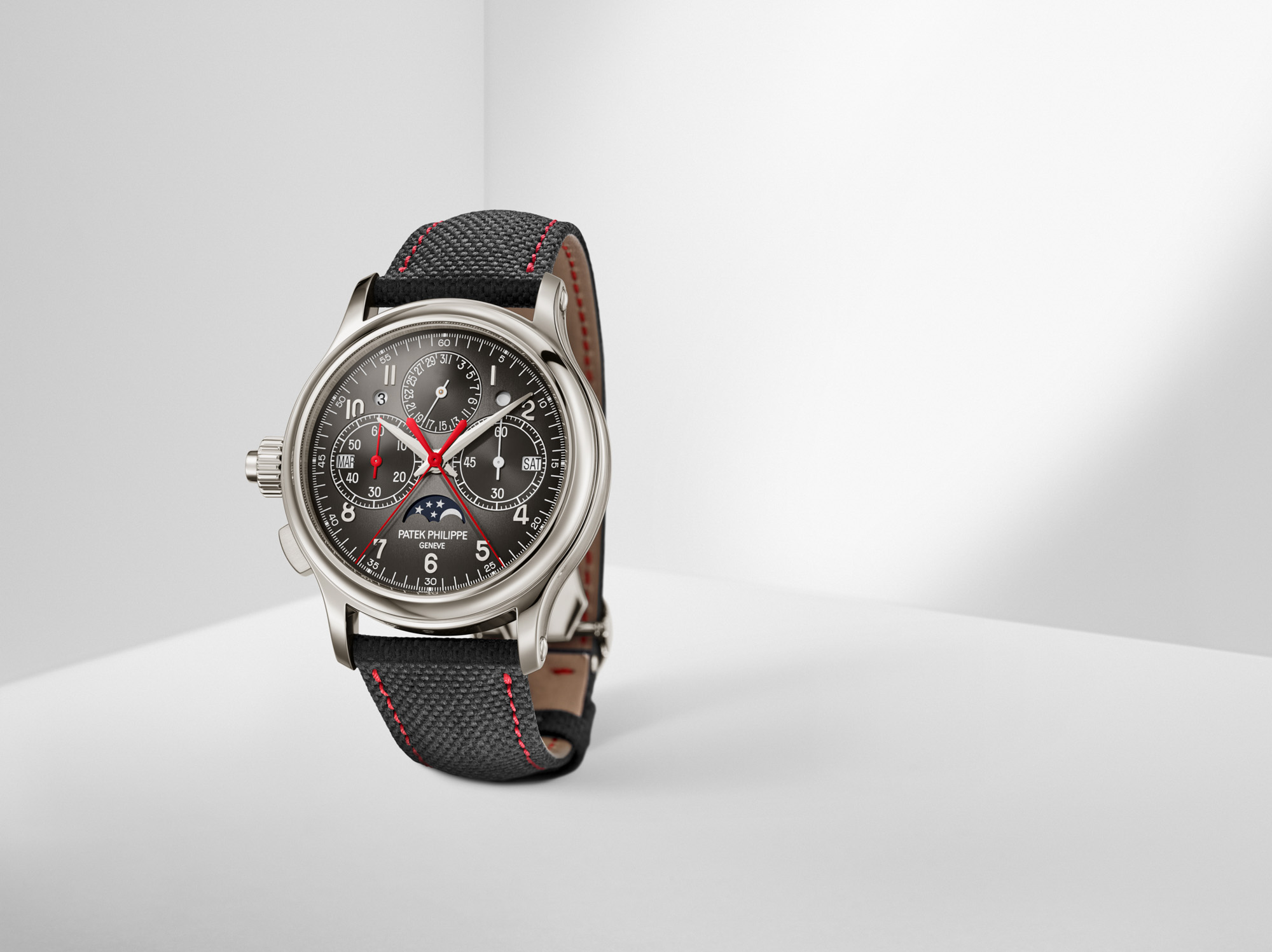 Just like the reference 3572 that serves as its foundation, the case of the new left-handed Patek Philippe ref. 5373P-001 Split-Seconds Monopusher Chronograph with Perpetual Calendar measures 38.3mm in diameter by 12.93mm-thick. However, the solid 950 platinum case has essentially been rotated 180 degrees, so that its crown (complete with integrated monopusher chronograph button) now resides at the 9 o’clock location, while the pusher for its split-seconds function now sits at the rather unusual 8 o’clock position on the side of the case. Protecting the dial is a sapphire crystal, which is surrounded by a thin concave bezel that has been given a high-polish finish. Although the tops and bottoms of the lugs receive a mirror polish to match the bezel, the sides of the case feature a contrasting horizontal satin finish that adds to the watch’s relatively sporty overall aesthetic. 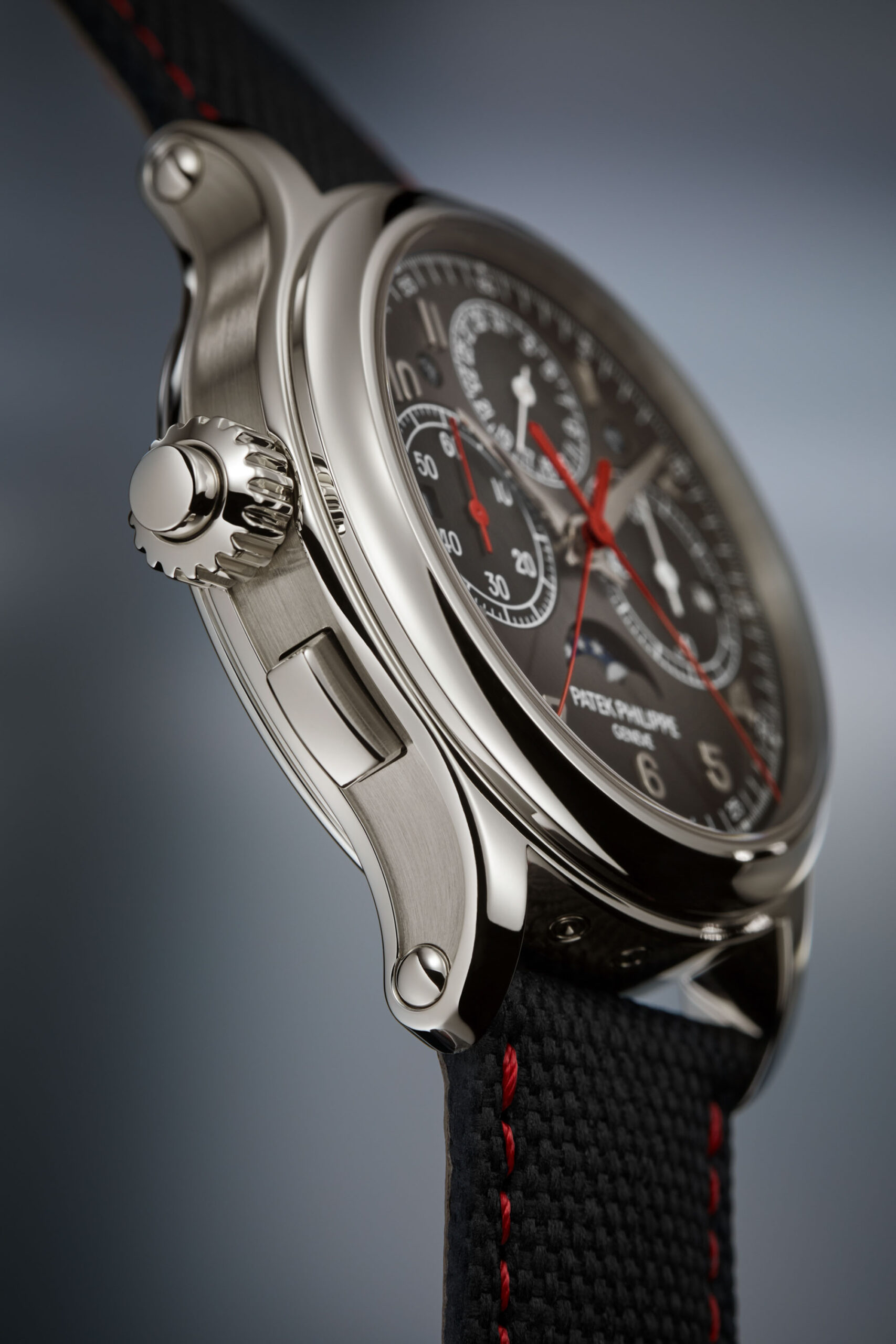 Just like all of Patek Philippe’s solid platinum watches, the new ref. 5373P-001 includes a small brilliant-cut diamond set into the side of the case between the lugs, and while this detail normally appears on the 6 o’clock side of the watch, it is set between the lugs on the 12 o’clock side of the new left-handed reference 5373P-001. A sapphire display caseback is the standard option fitted to the watch since it will allow you to observe the beautifully finished manual-wind movement; however, Patek Philippe also includes an additional solid-platinum caseback that can be engraved and swapped onto the watch if desired by the customer. Lastly, completing the new ref. 5373P-001 and fitted to its 20mm lugs is a black calfskin leather strap that features an embossed textile pattern with bright red contrast stitching and a solid platinum fold-over clasp. 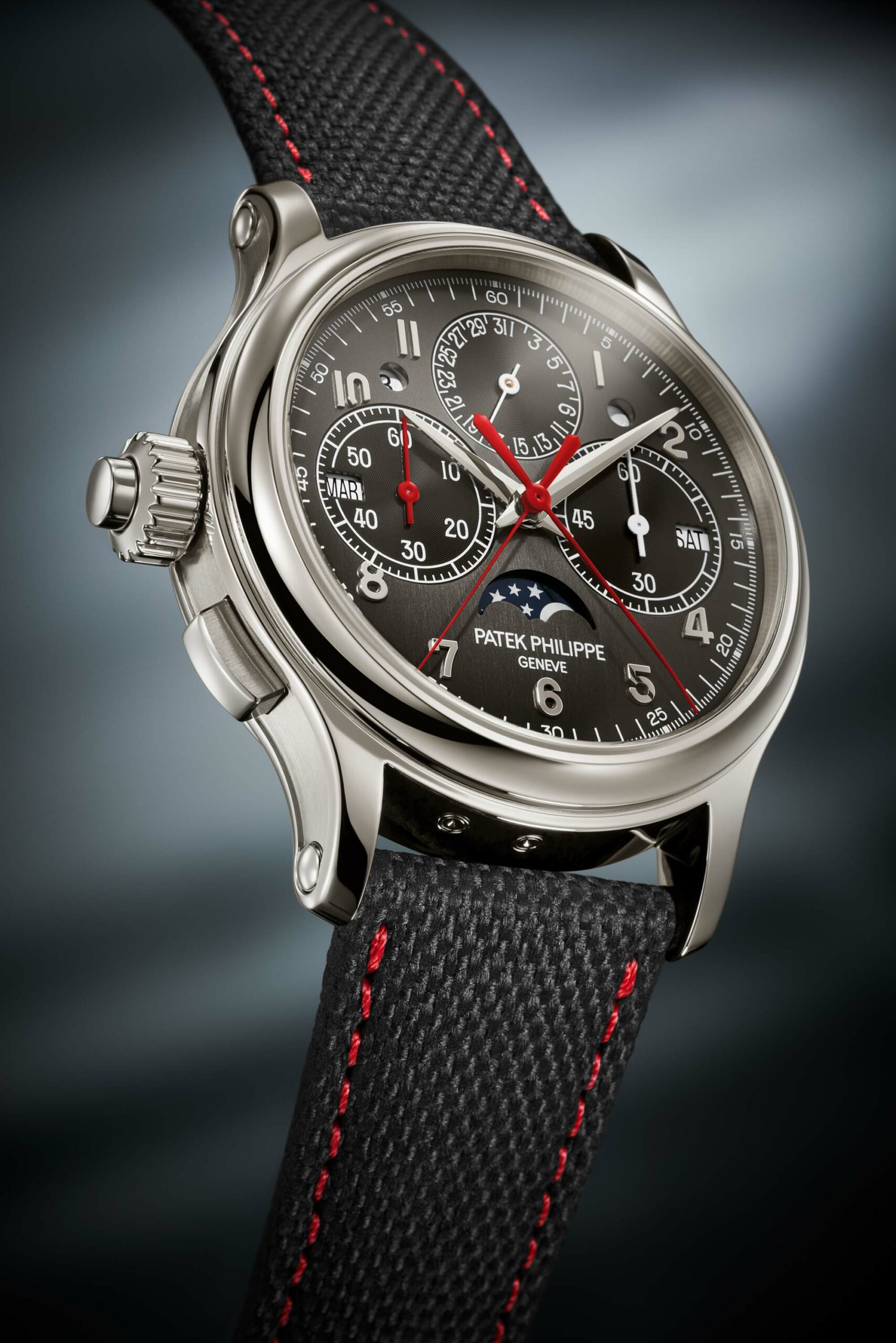 Just like the case, the dial of the new Patek Philippe Split-Seconds Monopusher Chronograph Perpetual Calendar ref. 5373P-001 has also been inverted 180 degrees. Rather than having a 3-6-9 layout for the sub-dials with the moonphase complication at the 12 o’clock location, the new left-handed Patek Philippe ref. 5373P-001 features the exact opposite configuration, with the moonphase now at 6 o’clock. Even the small day/night indicator and display for the leap year cycle have swapped places and now appear on the upper half of the dial. The surface of the dial is a charcoal gray color with a gradient effect that darkens towards the outer edges, and while the majority of the dial has been given a vertical satin finish, the trio of registers is ebony-black in color with a grooved snailed pattern. Applied Arabic numerals and faceted Dauphine hour and minute hands indicate the time, while the three chronograph hands are varnished bright red for maximum legibility. Regardless of the fact that it is packing some serious high-end complications, the colors of the dial give the new ref. 5373P-001 an inherently sporty overall aesthetic that simply does not exist among the various versions of the ref. 5372. 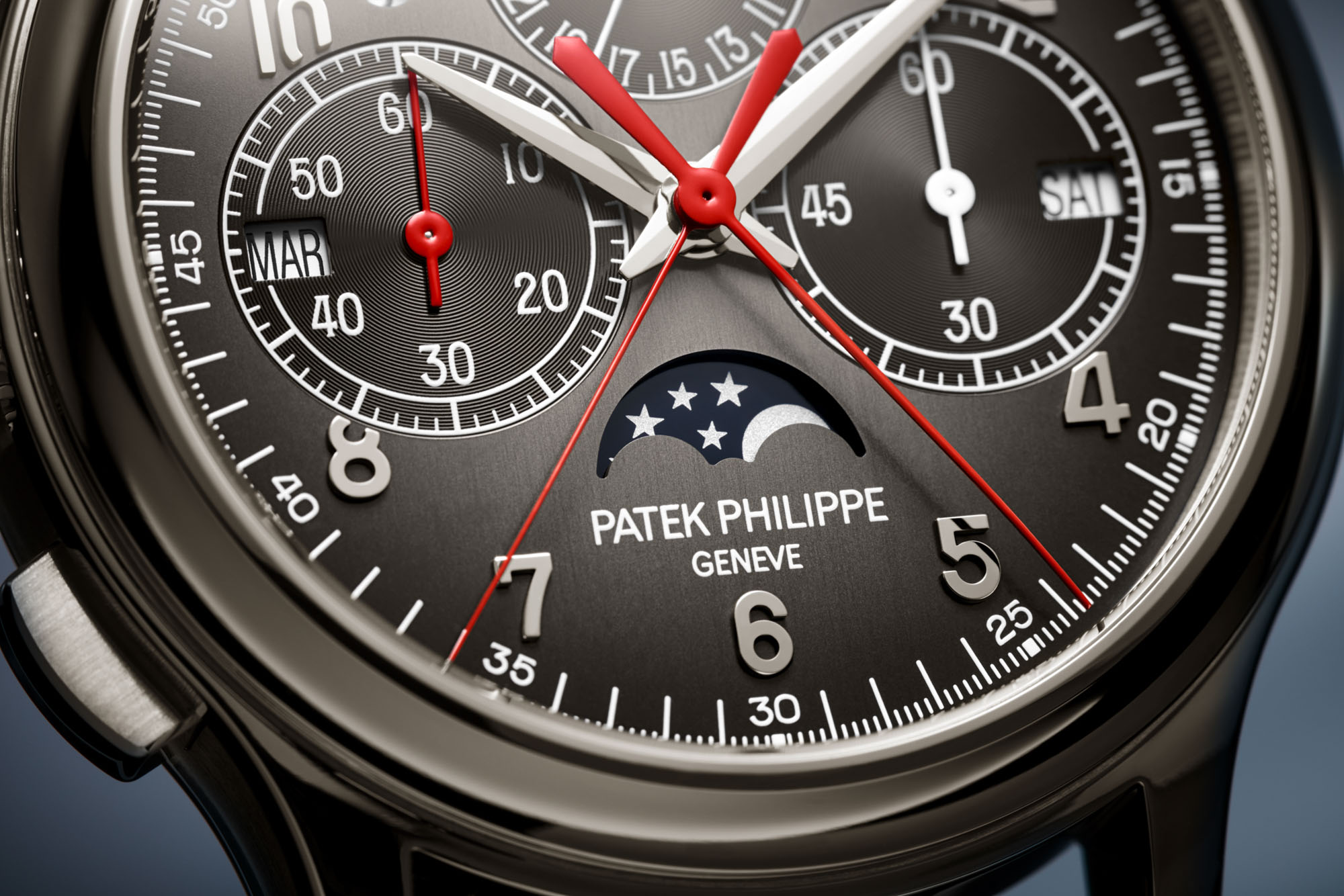 Despite its inverted layout, the new Patek Philippe Split-Seconds Monopusher Chronograph Perpetual Calendar ref. 5373P-001 is powered by the same manually-wound Caliber CHR 27-525 PS Q mechanical movement that can be found inside the brand’s ref. 5372 watches. A column wheel-controlled split-seconds chronograph with a 60-minute totalizer, the Cal. CHR 27-525 PS Q also offers a perpetual calendar with day, month, leap-year cycle, and day/night indicator apertures, along with an analog date indicated by the sub-dial at 12 o’clock, and a highly accurate moon phase display that deviates by just one day every 122 years. Running at a frequency of 21,600vph (3Hz) and offering users a power reserve of up to 48 hours (when the chronograph is not in use), the Cal. CHR 27-525 PS Q is now exclusively available inside the new left-handed ref. 5373P-001, since Patek Philippe has discontinued both versions of the ref. 5372 that were also powered by this feature-packed movement. 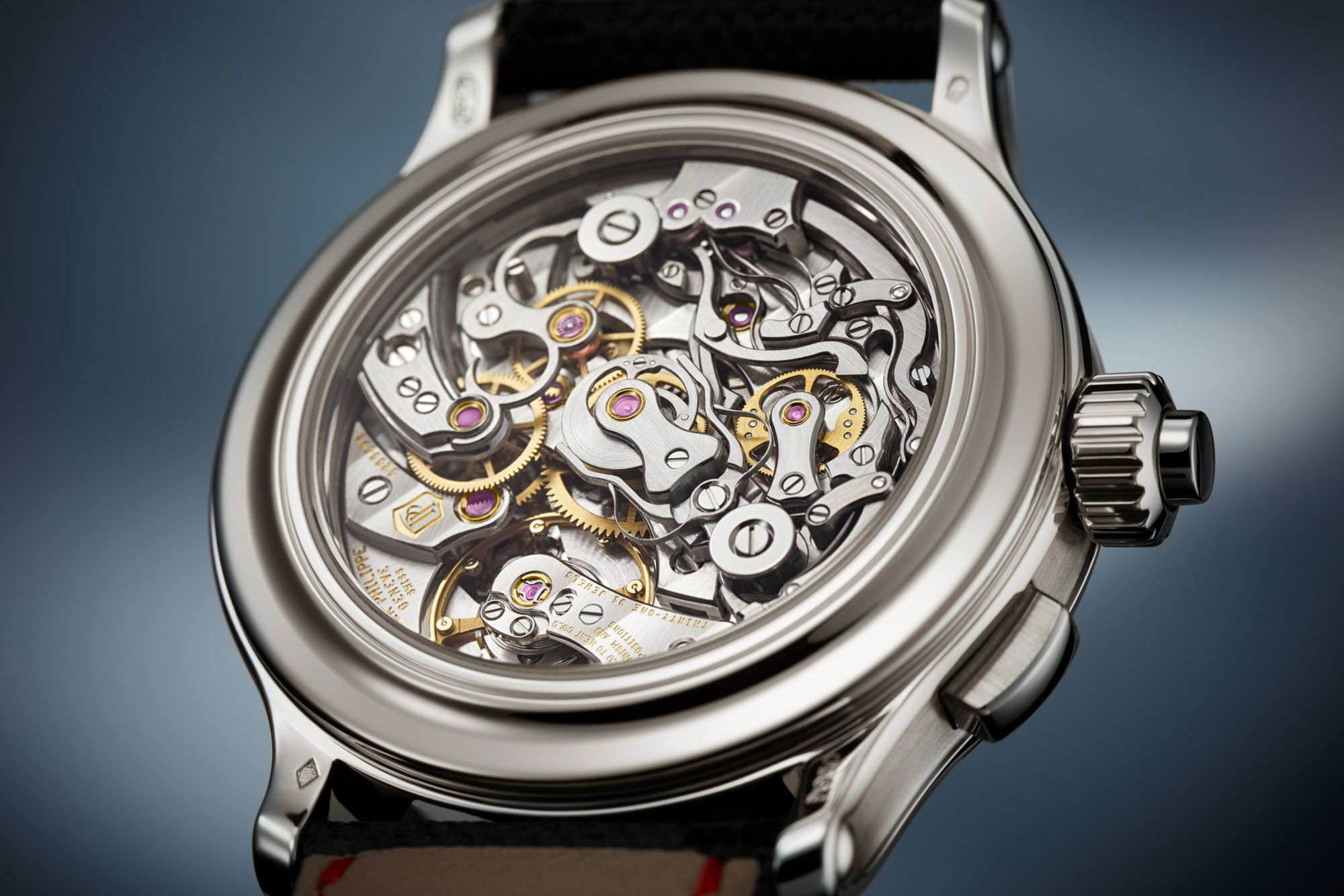 Although the ref. 5373 could essentially be seen as a replacement for the ref. 5372, the two models are significantly different watches. Aside from the whole left-handed configuration and the inverted layout, the new ref. 5373P-001 has an undeniably more sporty appearance, swapping out traditional dial colors for bright splashes of red and the shiny alligator strap of its predecessor for a textured leather strap with matching red contrasting stitching. At the same time, despite the new model’s radically different aesthetic, the left-handed reference 5373P-001 is essentially the same watch as its predecessor, just rotated 180 degrees, and this is likely the reason why the diamond set into the side of its case appears between the lugs on the 12 o’clock side, rather than in the normal position on the opposite side of the watch. While the hour markers, text, and even the shape of the moonphase display have all been inverted so that they appear in their normal orientations, the core design of the dial is essentially just the upside-down version of the one fitted to the recently discontinued ref. 5372. As for how much it will cost to add the new left-handed ref. 5373P-001 to your collection, the brand has declined to disclose the price for the new watch, but just the name of the new model alone should be enough to tell you that it will likely cost a six-figure sum: “Patek Philippe Split-Seconds Monopusher Chronograph Perpetual Calendar” — literally every single one of those words sounds expensive, and the fact that it is crafted from solid platinum only makes that statement even more true. For more information, please visit the brand’s website.