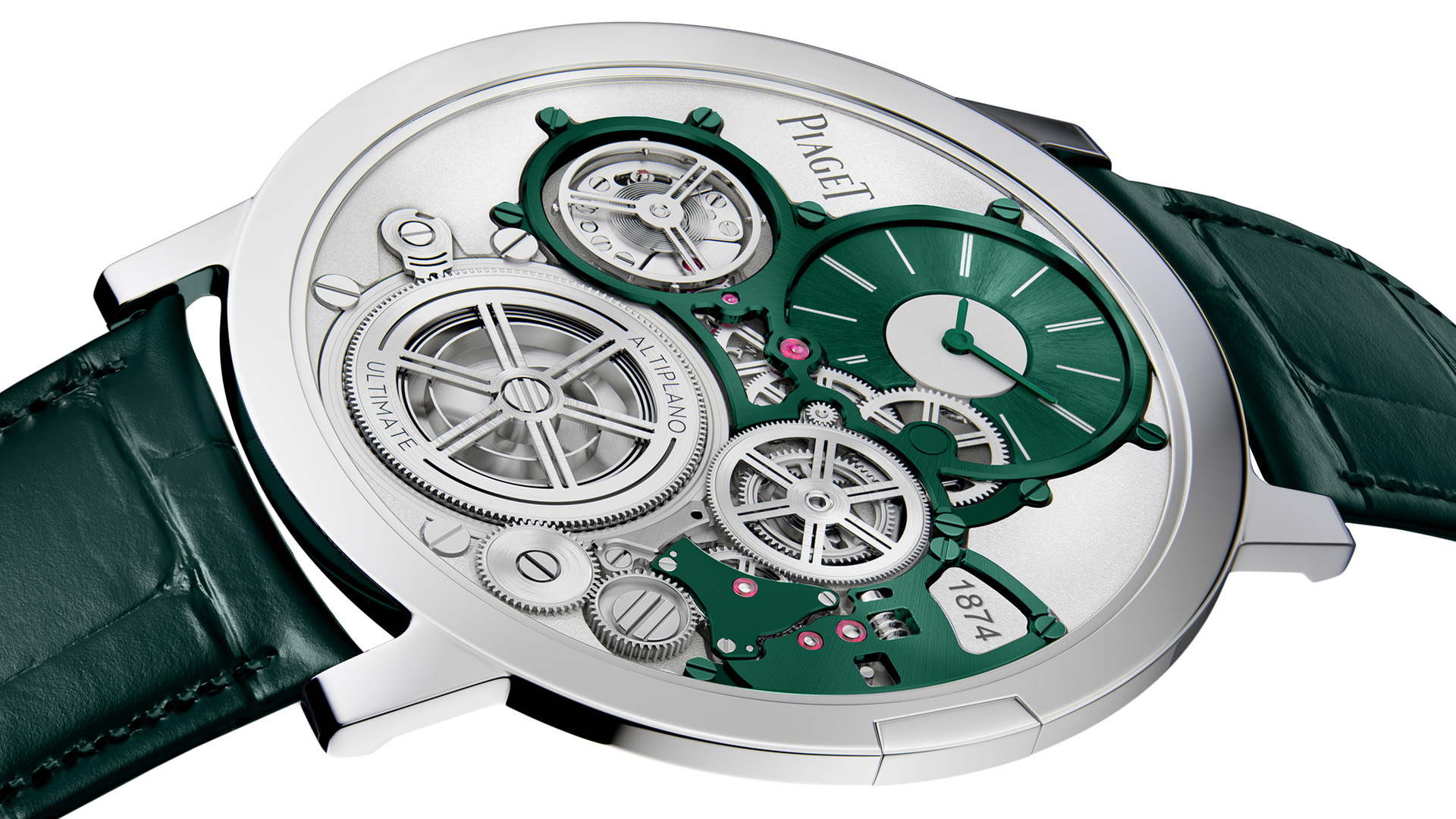 Swiss watchmaker Piaget has made it clear that over the next few years, it will place some extra attention on its complicated movement manufacture located in the small town of La Cote-Aux-Fees, Switzerland. The primary Piaget headquarters is in Geneva, but up high in the mountains is where Piaget manufactures its most elaborate mechanisms, including its tourbillons and ultra-thin movements. I recall visiting the La Cote-Aux-Fees manufacture myself some years ago. 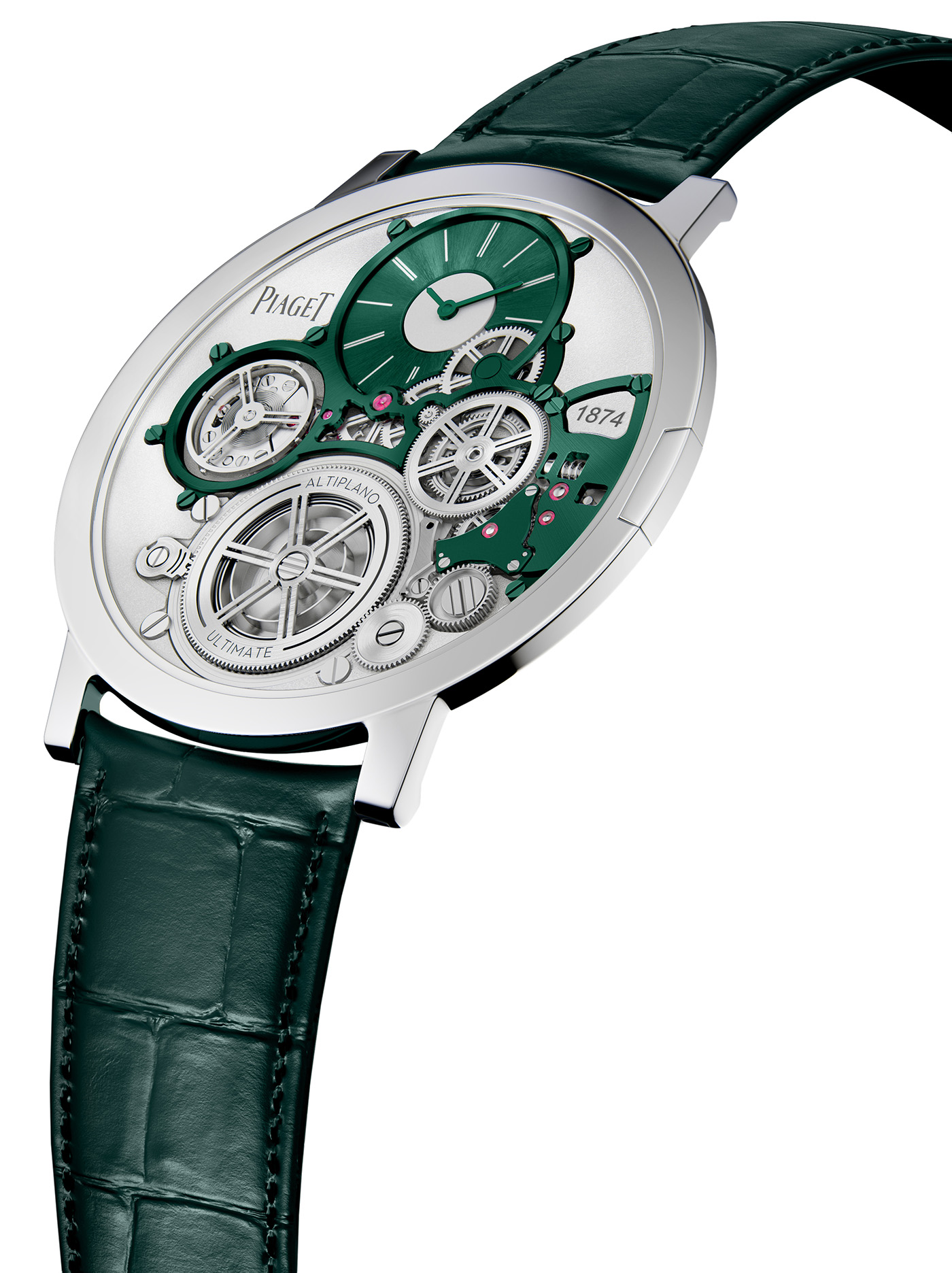 One guess as to how Piaget will celebrate the La Cote-Aux-Fees facility is with the color green. The new-for-2021 Piaget Altiplano Ultimate Concept La Cote-Aux-Fees watch is graced with some green-hued movement bridges, a color that Piaget says is inspired by trees. Of course, it is: The one thing any Swiss watchmaker sees more of in any given day aside from assembly screws is trees. My theory is that Piaget will decorate particular high-end models (that are also produced at the La Cote-Aux-Fees manufacture) with a green color scheme in celebration of this part of the company.

The Piaget Alitplano Ultimate Concept watch (aBlogtoWatch hands-on here) is the latest evolution in Piaget’s long history of making really thin watch movements. The entire case and movement together are just 2mm-thick. Piaget’s efforts in ultra-thin timepiece technology began in earnest back in the 1960s. At the time it was increasingly en vogue for gentlemen to wear thin watches. The idea was that the thinner the movement was, the more difficult it was to design and assemble, which is true. Ultra-thin watches had a good run until the quartz crisis/revolution. This presented the watch market with an entirely new movement technology that was, on average, thinner than mechanical watches. Decades later, when luxury watches gained traction again, Piaget picked up where the historic brand left off and started to make modern ultra-thin mechanical movements. Today, Piaget remains one of a small number of mechanical watchmakers who are true masters of the “high complication” that is a very thin mechanical movement. 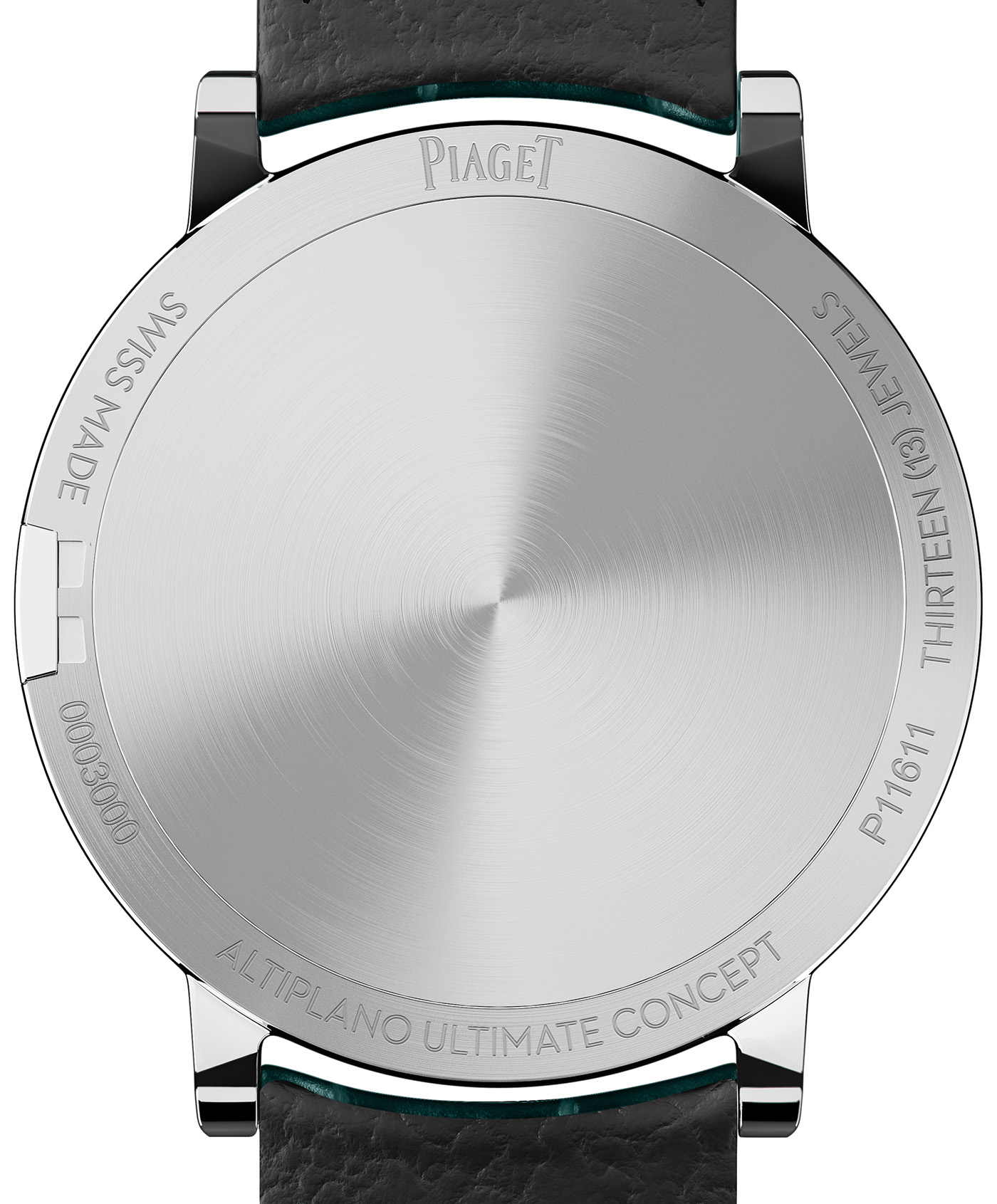 The Altiplano Ultimate Concept watch case is 41mm-wide and produced from an alloy that uses a lot of cobalt metal. The challenge at this thin size is structural integrity. Too thin and brittle, and the watch case parts will snap or bend. The sapphire crystal, for example, is just 0.2mm-thick. There really isn’t a separation of case and movement, as the case is the mainplate for the movement, a design detail that allows for the watch to be considerably thinner than most other wristwatches. 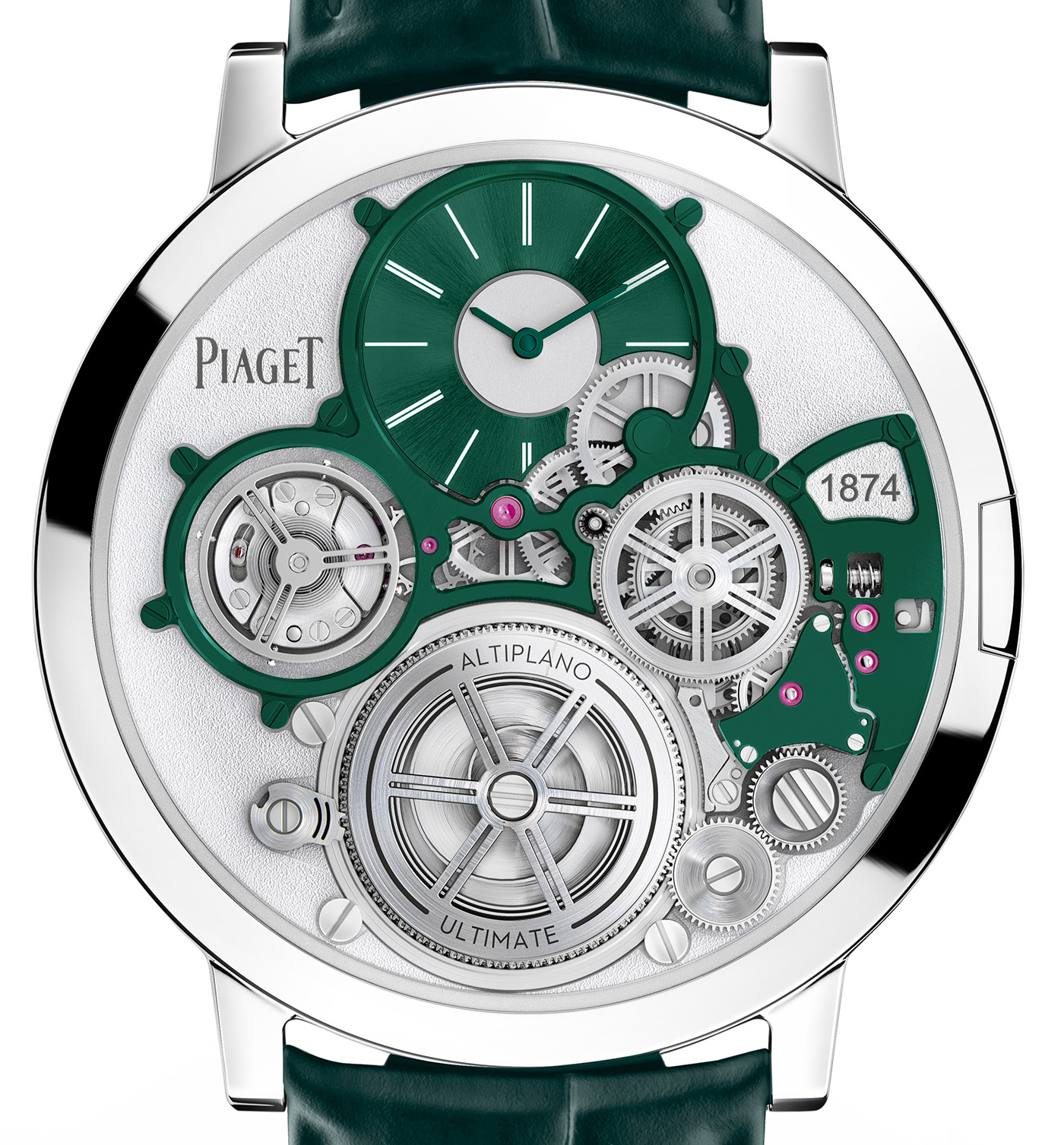 The movement connected to the Altiplano Ultimate Concept watch is the Piaget caliber 900P-UC. It operates at 4Hz (28,800 bph) with a power reserve of about 45 hours. The mainspring barrel is carefully mounted on one single ceramic ball bearing. Time is indicated off-center via its own dial at the 12 o’clock position. The entire movement is meant to minimize the thinness of parts and maximize space. Assembling these watches requires incredible skill because of how unforgiving the tolerances are.

The Altiplano Ultimate Concept watches are so thin that they have a key-style crown, as opposed to a circular one. That means winding the watch movement might take an extra moment. That is a small price to pay to wear something so dazzling and yet impossibly thin on the wrist. The watch is a real treat as a conversation piece, even as it disappears on your wrist when you angle the watch case on its side. 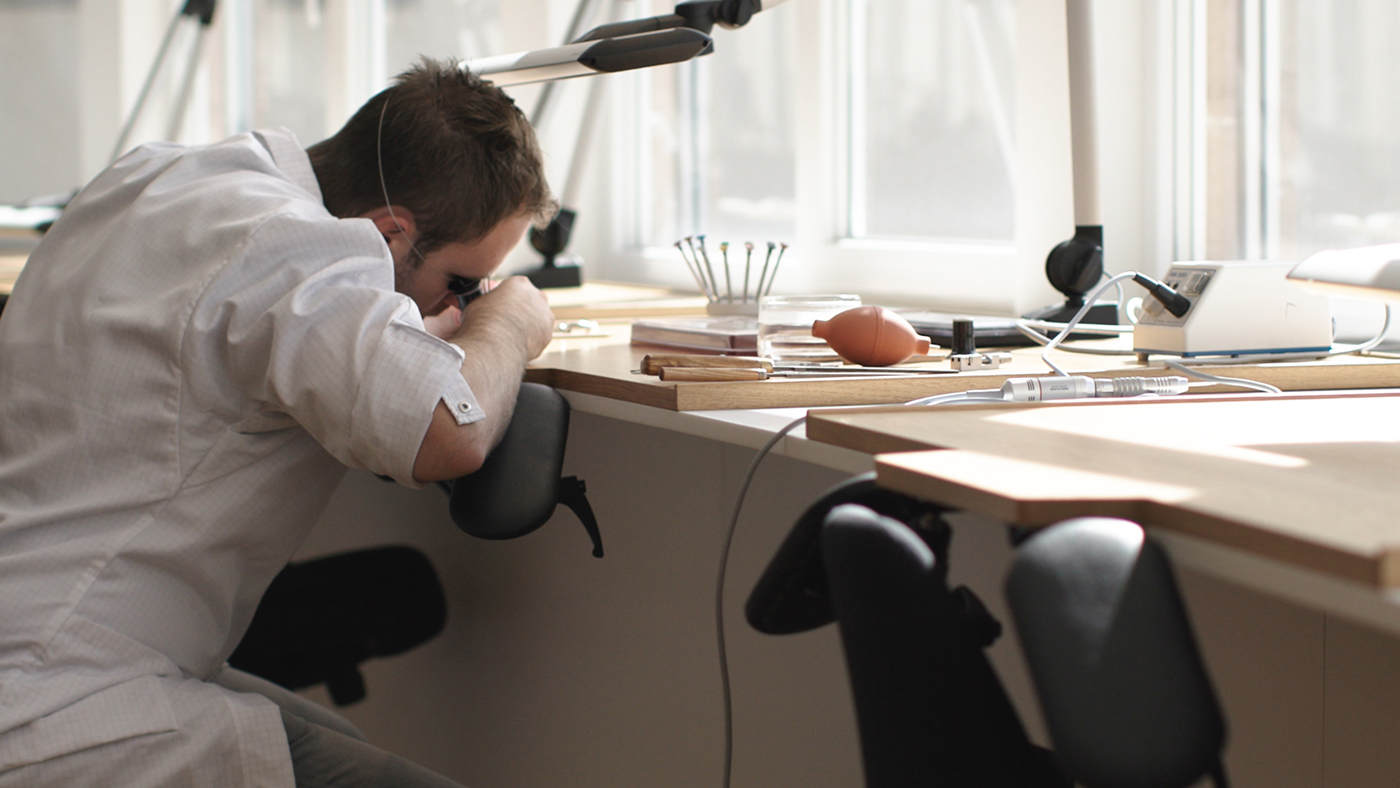 The Piaget Altiplano Ultimate Concept La Cote-Aux-Fees Edition is an attractive watch in a hip color that is also extremely collectible given the limited numbers of production and, of course, the retail price. It would have been nice to see Piaget do a bit more with the colors, but green is in right now and so is the unpretentious mechanical magic of a timepiece such as this. Price is $425,000 USD. Learn more at the Piaget website here.