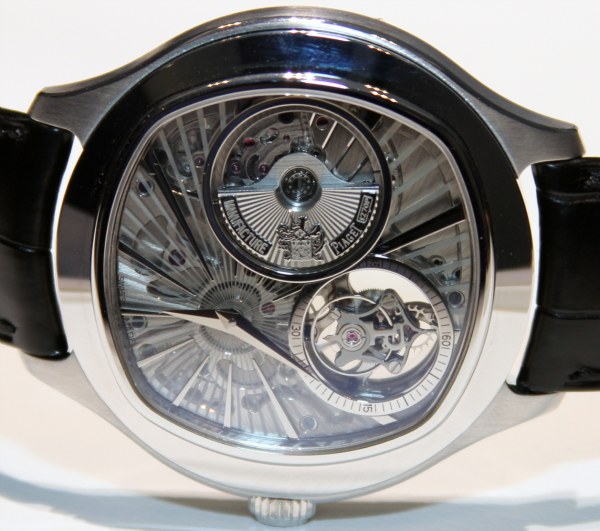 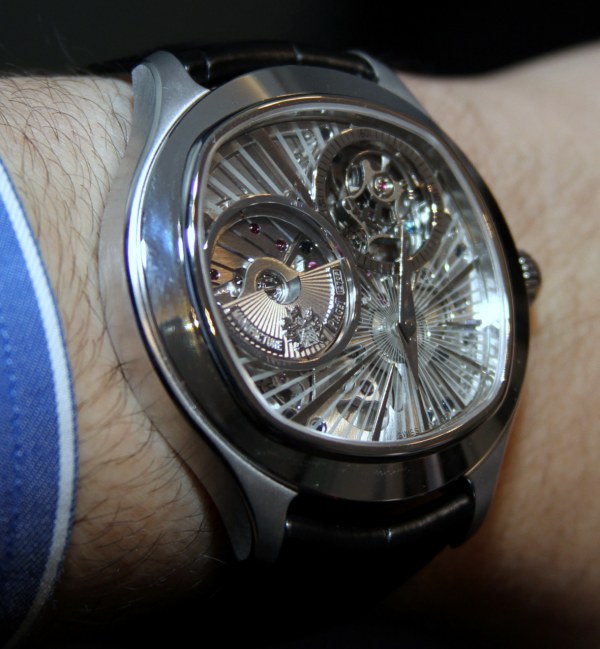 Piaget’s flagship men’s watch for 2011 is the Emperador Coussin Tourbillon Automatic Ultra-Thin. I first wrote about the watch here. There you can learn more about the technical details there and in the Haute Living article that I wrote. In this article I would like to talk more about being with the watch now that I have been able to molest it for a bit.

Piaget was really proud about releasing this watch, but also I think they were a bit nervous as to the reaction. The design of it is very experimental and not something you are used to with a typically clean face Piaget watch. The brand’s highly popular Altiplano Automatic 43 has a dial that is thematically opposite to this tourbillon. What they share is a “thin” outlook on life. They are both very thin in size for what they are. The Altiplano Automatic 43 is the thinnest automatic watch in the world, and the Tourbillon Automatic is the thinnest automatic tourbillon watch in the world. But Piaget designed them to look like really distant cousins despite being under the same brand name.

Coming in 18k white gold or 18k rose gold, my pick is white gold for this watch. Piaget has always been a “tuxedo watch” brand for me, and white gold goes best with the black and white look I feel fits Piaget most splendidly. I also think white gold is more flattering to the larger sized Emperador Coussin (cushion) case. The case is interesting and for me as well as an acquired taste. I wouldn’t wear it daily, but out of all the Piaget cases available now, I think the cushion case does frame the wild dial of this timepiece best.

Let me address the issue of reading the watch. You can… but it isn’t swimmingly easy. In fact, it isn’t so much about the hands or hour indicators being hard to see, as it is that the highly engraved spinning platinum rotor and flying tourbillon are such a distraction. All the movement on the dial is a marvelous spectacle, but you’ll glance at your watch a bit and then look away, only to realize you forgot to check the time. 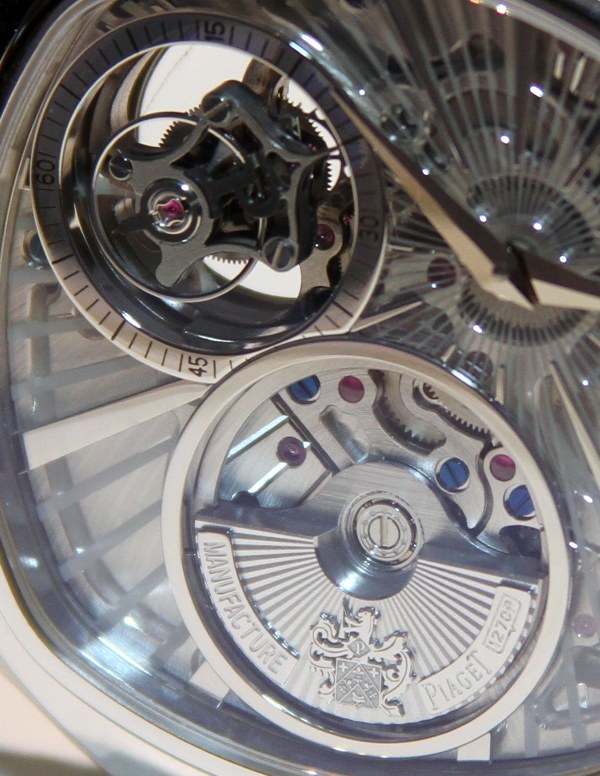 The clock dial itself uses elegant dauphine style hands and applied gold hour markers done in a sun-burst array on the frosted sapphire dial that also has a different type of sunburst display pattern on it. There are a lot of lines going on here. Like I said, it is visually grand, but this is no tool watch. Interestingly enough, the colors from the blued screws and synthetic rubies aren’t apparent until you look more closely at the dial. From afar they aren’t obvious, but as you can tell from the closeup images, the blue and red colors are nice and bright when looking at the detailing of the dial.

Speaking of details, Piaget does not disappoint with the Emperador Coussin Tourbillon Automatic Ultra-thin. All the engravings, angles, and components look sharp and high-quality. As you should know, Piaget is first and foremost a movement maker, so the quality of the movement is really impressive. As ultra thin watches go, the watch isn’t “that” thin. The case is about 10mm thick – which I would consider thin, but not ultra thin, The “ultra” part comes into consideration from a marketing perspective and to help keep you impressed at the size despite the features that it has. Features such as the automatic rotor and tourbillon and elements known to add thickness, so Piaget’s technique was to put them side by side rather than stack them. 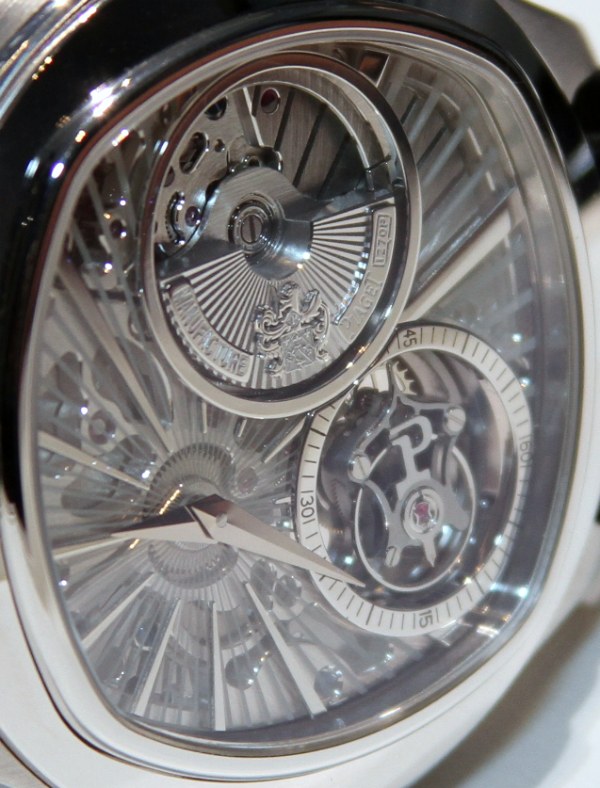 There is a resounding feeling in this watch that Piaget is sick of getting labeled a fashion brand or a jewelry maker that later decided to make watches. Like I said, Piaget was for much of its early life exclusively a movement maker. Watches like this are an attempt to remind people that they are technical nerds above and beyond all else. The jewelry that they make is nice enough to sometimes make me consider cross-dressing, but that is a separate division. They are really about excelling in the art of thin, practical movements. Is this watch practical? No, but it does embody their capabilities and is a logical addition to their “word’s thinnest” book of bragging rights. 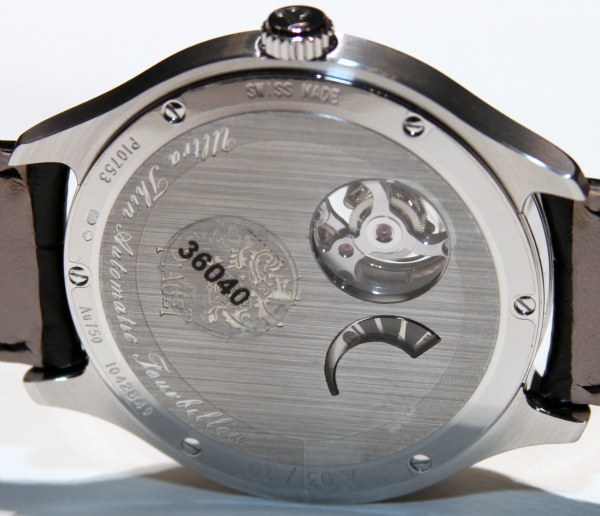 The back of the watch isn’t as open as the front. You get a little slit opening for the power reserve indicator and an additional view of the tourbillon carriage. It also makes for a good area for personal engravings. Something you might want to explore as 1) Piaget will do that for you, and 2) it might be a good idea if shelling out for this timepiece. In Asia, Piaget timepieces are often considered a symbol of taste and success. This Emperador Tourbillon Automatic takes that feeling to a new level as wearing this watch to me is sort of an ultimate “F you” statement when brandished on your wrist. There are a handful of timepiece such as this in the watch world – and this is one of them. Sure it is a timepiece for us watch nerds looking for an horogasm, but it also so anti-blingy, it is blingy. Piaget knows that, and tacitly shows off the watch with a smirk that says “you need to be in a special club to appreciate this.” That is sort of the point. People will notice this watch if you wear it. Some will appreciate it, and those that don’t should get their statements retorted with “you don’t even have the right to comment on this watch.” 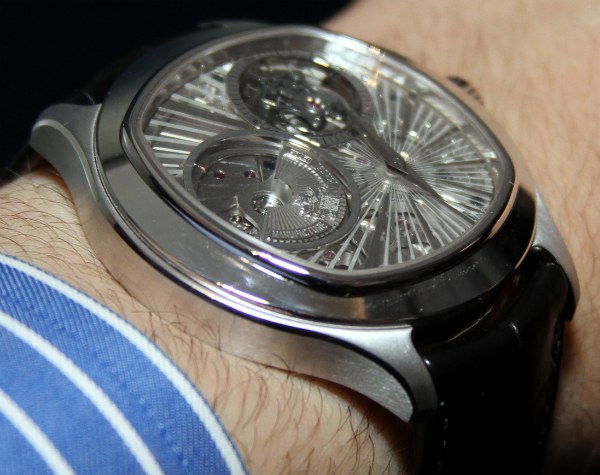 The comfort level for this large watch is rather impressive. A watch this complex that will fit under a sleeve is rare. Now that ultra-thin part comes in handy. Like I keep saying, ultra thin watches are great as along as they aren’t ultra small. This watch (along with the message from the Altiplano 43) furthers Piaget’s CEO’s message that thin watches don’t need to be narrow. Broad and svelte is the way to go.

I can’t afford the higher six figure price that Piaget respectfully requests in order to own one of these timepieces – but unlike many high-end watches that I don’t feel are worth it, I would totally respect anyone who buys one of these. Just don’t do something silly like engrave your daughter’s face on the caseback (those guilty of that know who they are). piaget.com