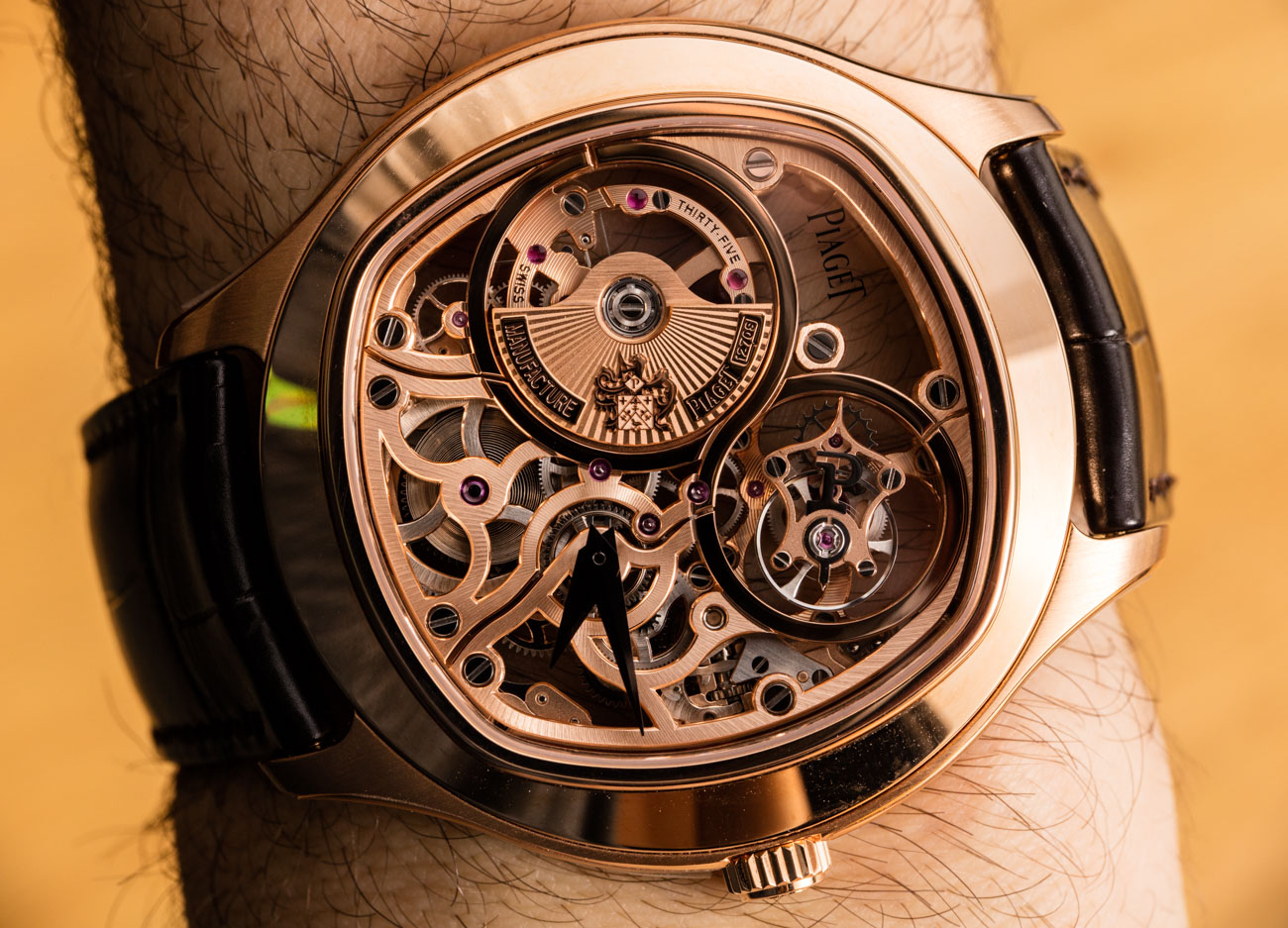 Nearly five years ago, I originally went hands-on with the reference GOA40042 Piaget Emperador Cushion Tourbillon Skeleton watch here. Now, in 2020, I revisit the same model Piaget tourbillon to see how it has held up — especially with regard to style, technicality, and overall impressiveness. Piaget has been relatively quiet over the last few years – especially when it comes to men’s watches. Despite the brand having a plethora of emotionally compelling horological wonders, the company seems intent on relatively superficial marketing that espouses the notion that you might want to wear a Piaget watch to a black tie event. In the future, I’d like to see the brand explain why you might want to choose Piaget to a black tie event (aside from the fact that a celebrity was selected to wear one at an awards show). If Piaget can follow this advice, they will again earn the greater attention from serious aficionados and collectors that they deserve.

As a brand, Piaget currently does far better in the East than in the West. Marketing to these different parts of the world (yes, “East” and “West” are overly broad generalizations) can often involve the need for wholly different tactics as well as symbolism. For example, the figure eight infinity symbol on the dial, which frames the housing for the automatic micro-rotor and the tourbillon cage, is an aesthetic feature I don’t recall noticing back in 2015 (and I wasn’t looking for it, either). Americans don’t really seek out this symbol, but we find it very frequently in watches meant to be sold in China. Piaget has a point. If some consumers in China feel better about a product provided it has a figure eight (“8” is often synonymous with good fortune, as I understand it), and everyone else doesn’t notice — then why not put one in there for good measure? At the same time, how do consumers in the West feel if they believe a watch was designed with an entirely different consumer in mind? These might sound like entirely trivial matters, but people who spend over $200,000 on a watch are rarely without options, and so choosing one timepiece over another can really come down to considerations that might otherwise appear of marginal importance. 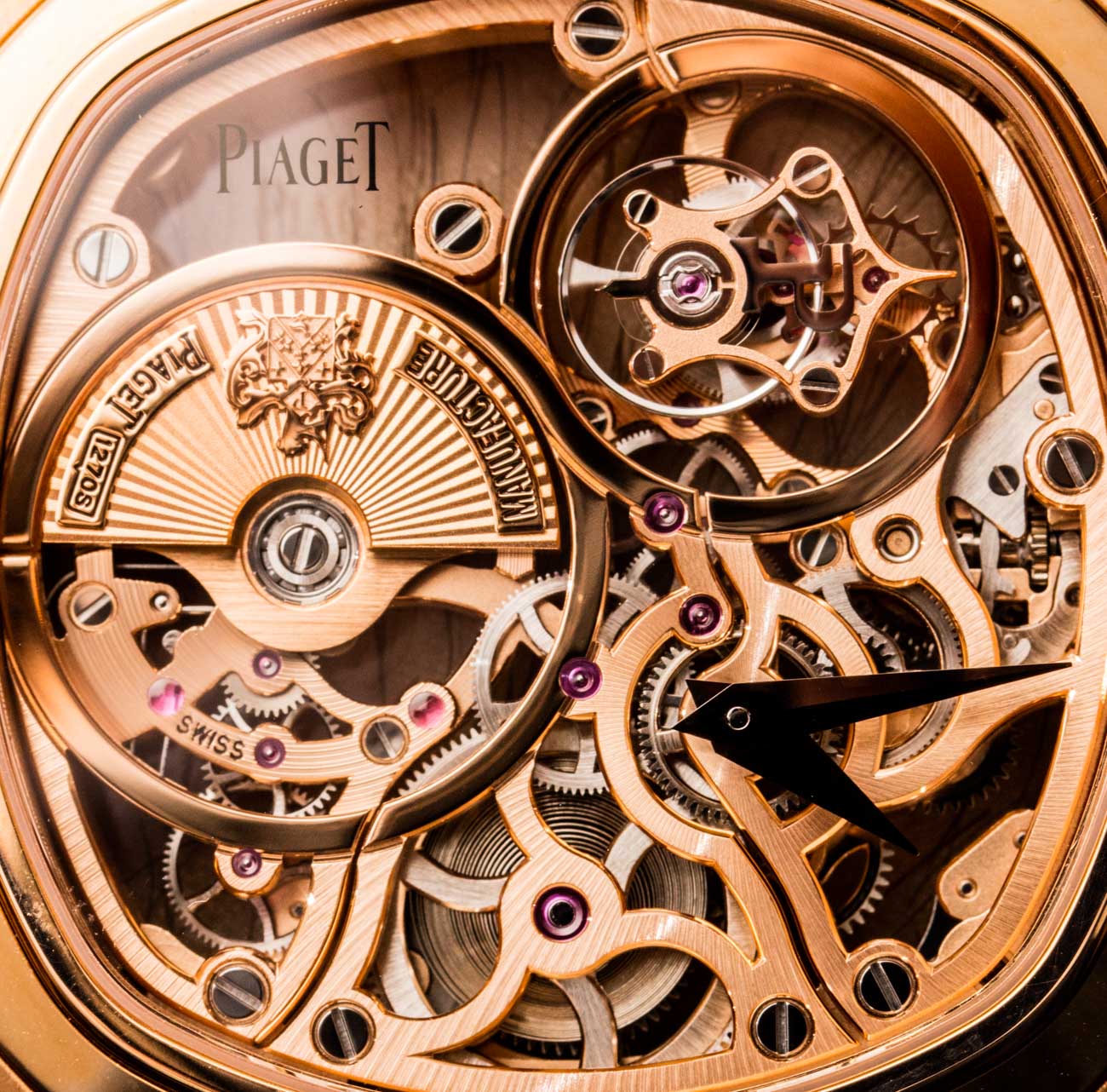 Despite Piaget’s hints as to what market they want this (and many other Piaget models) to appeal to, one of the things I love about the Emperador Cushion Tourbillon Skeleton is that it really doesn’t seem to have a particular wearer in mind. A fun question to ask when seeing intricately ornate pieces of horological art such as this is, “Who would look best wearing it?” The focal point of the watch is the lovingly skeletonized and hand-decorated in-house Piaget caliber 1207S automatic tourbillon movement. There is no watch dial, save for what reference points your eyes might find to help you read the time on the off-centered dauphine-style hour and minute hands that sit at around 4 o’clock on the dial. The rest of the face offers a proud yet almost flamboyant “Geneva ballet” of watch parts and openworked bridges that move like streams in Escher-like directions. Is all this a better act for an audience, or is the purpose of this mechanical display for the private enjoyment of the wearer? Hard to say what Piaget was thinking.

Piaget still holds a number of “the thinnest…” records when it comes to watch movements, including that of having the world’s thinnest mechanical watch. When it comes to tourbillons, their ultra-thin efforts in some ways have been beaten by competitor Bulgari. That said, it probably isn’t a good idea to purchase a watch simply because it holds some numerical size record, as that usually doesn’t affect the greater wearing experience. Nevertheless, when spending this kind of money, you want some talking points. Piaget continues to claim that the Emperador Cushion Tourbillon is “the thinnest ultra-thin shaped automatic tourbillon skeleton in the world.” Is it just me, or does that statement include some strange-sounding qualifiers? 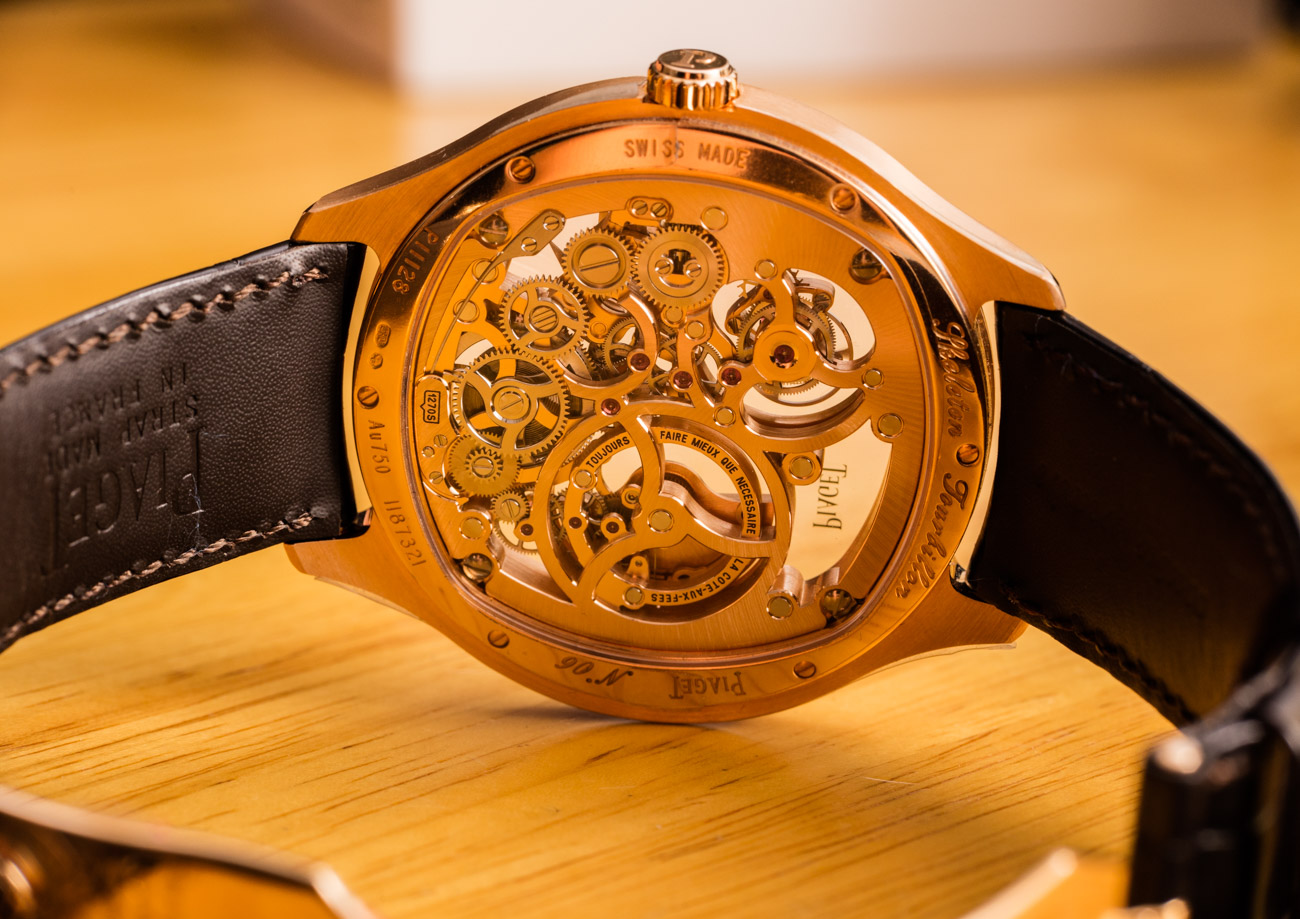 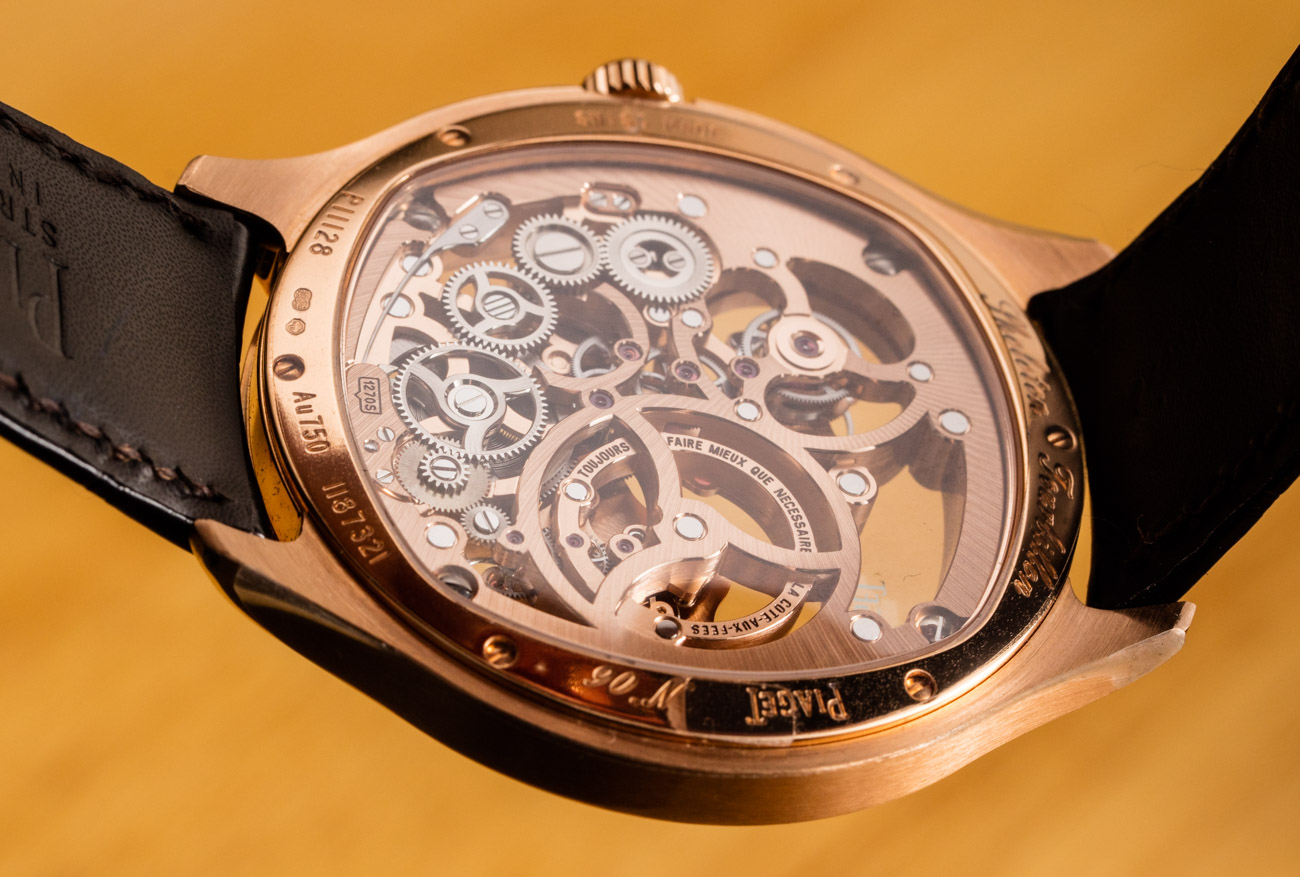 The 1207S movement is 5.05mm-thick and constructed of 225 parts. It is the skeletonized version of the 1207 movement that Piaget also produces. The 1207S operates at 3Hz with about 42 hours of power reserve and includes a flying tourbillon that uses a titanium cage. Note the Piaget “P” in the tourbillon itself. The movement displays just the time and is automatically wound with the solid platinum micro-rotor that is also visible on the dial. The watch is very much for both appreciating the structure and finishing of the movement and more trivial matters, such as knowing the time with precision, as a mere secondary concern.

Beauty-wise the movement has got it down. Looks make up for a lack of a certain level of practicality… and yet, at the same time, the movement is highly straightforward, even efficient, in its function and purpose. What I really like is that, without playing any games, Piaget  in– the Emperador Cushion Tourbillon Skeleton — is able to satisfy the eyes of a the most seasoned timepiece movement enthusiast, as well as offer a visual beauty that lay luxury seekers can readily enjoy. Not many watches of this ilk can do that, are often either too superficial for enthusiasts or too intellectual for others. Also, do not discount the fact that the movement bridges perfectly match the 18k rose gold case, an additional feat of manufacturing complexity that is not to be taken lightly. For example, the automatic rotor is actually in platinum but colored in a rose gold tone. 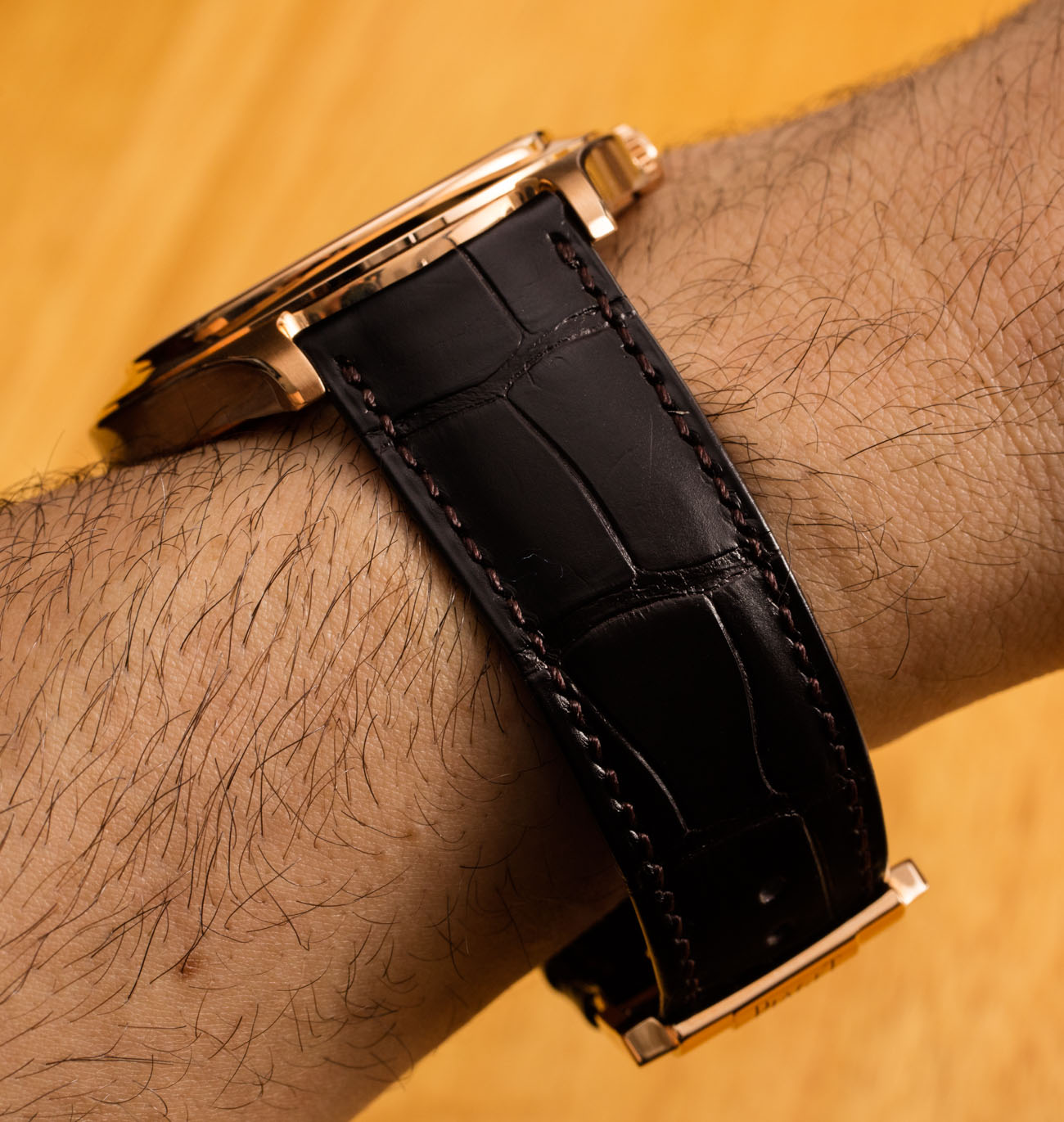 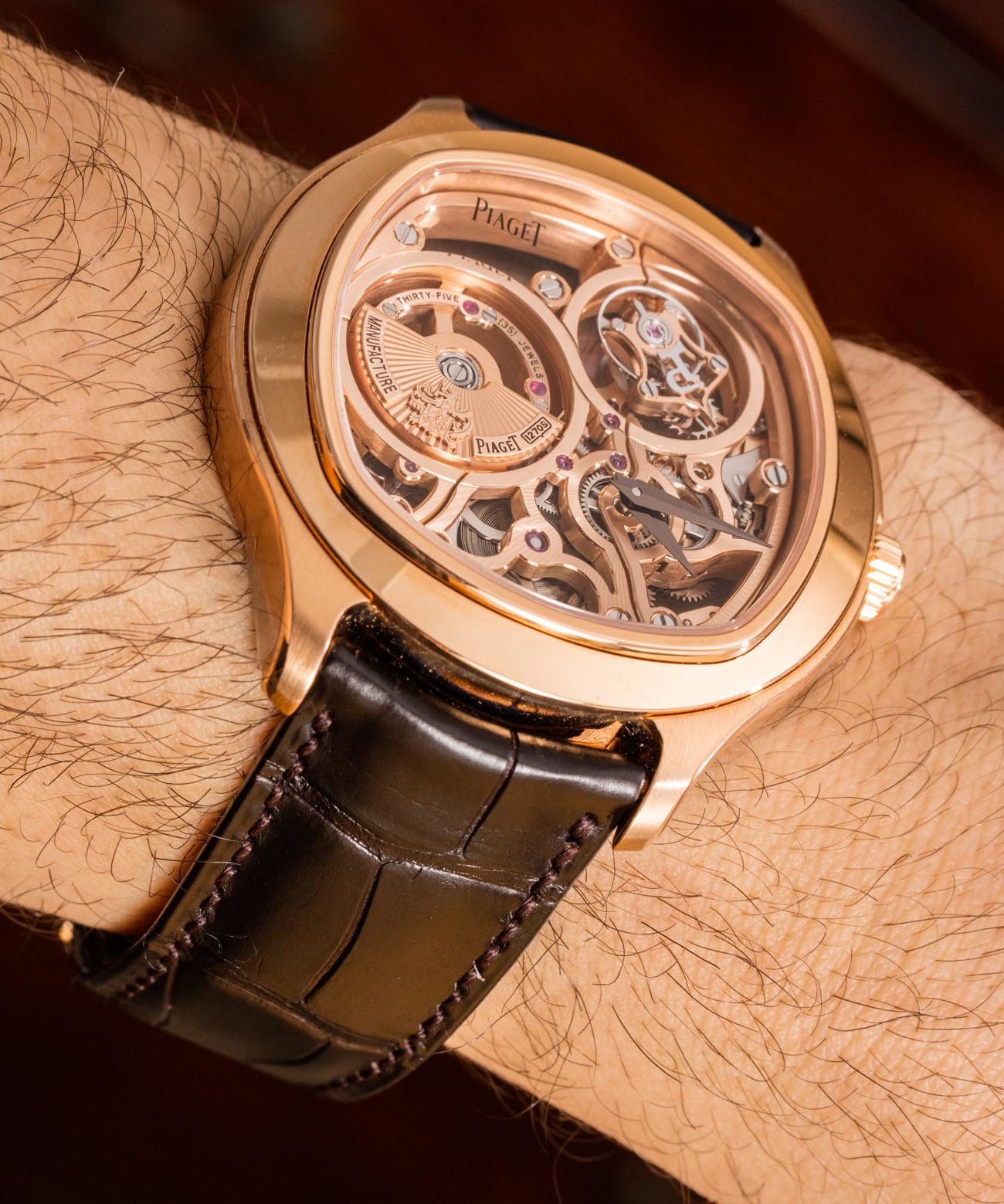 In addition to this reference GOA40042 in 18k rose gold, Piaget also produces the Emperador Cushion Tourbillon Skeleton in 18k white gold as the GOA40041. That version includes a tasteful black-colored rotor and matching hands. It is certainly the most traditionally black-tie of the watches, though with the warm tone of rose gold, I think this particular model is the livelier of the two. Note that Piaget has played with other versions of the Emperador Cushion Tourbillon as partially skeletonized with the caliber 1207P movement. Diamonds are certainly available on some versions.

Not that it is new, but wearing this timepiece reminds me of how much I appreciate the Piaget Emperador case. Here it is in a rather large 46.5mm-wide form, but don’t forget that it is relatively thin at just 8.85mm-thick. The Emperador case comes in a few styles, and I really like them all. This is the Emperador Cushion, and it is known as such because while the case is actually around, the dial (accordingly the sapphire crystal as well) is cushion-shaped. The thick, polished bezel contrasts with the brushed middle case that helps emphasize the cushion shape. Relatively stubby lugs help secure a classy, fitted alligator strap. 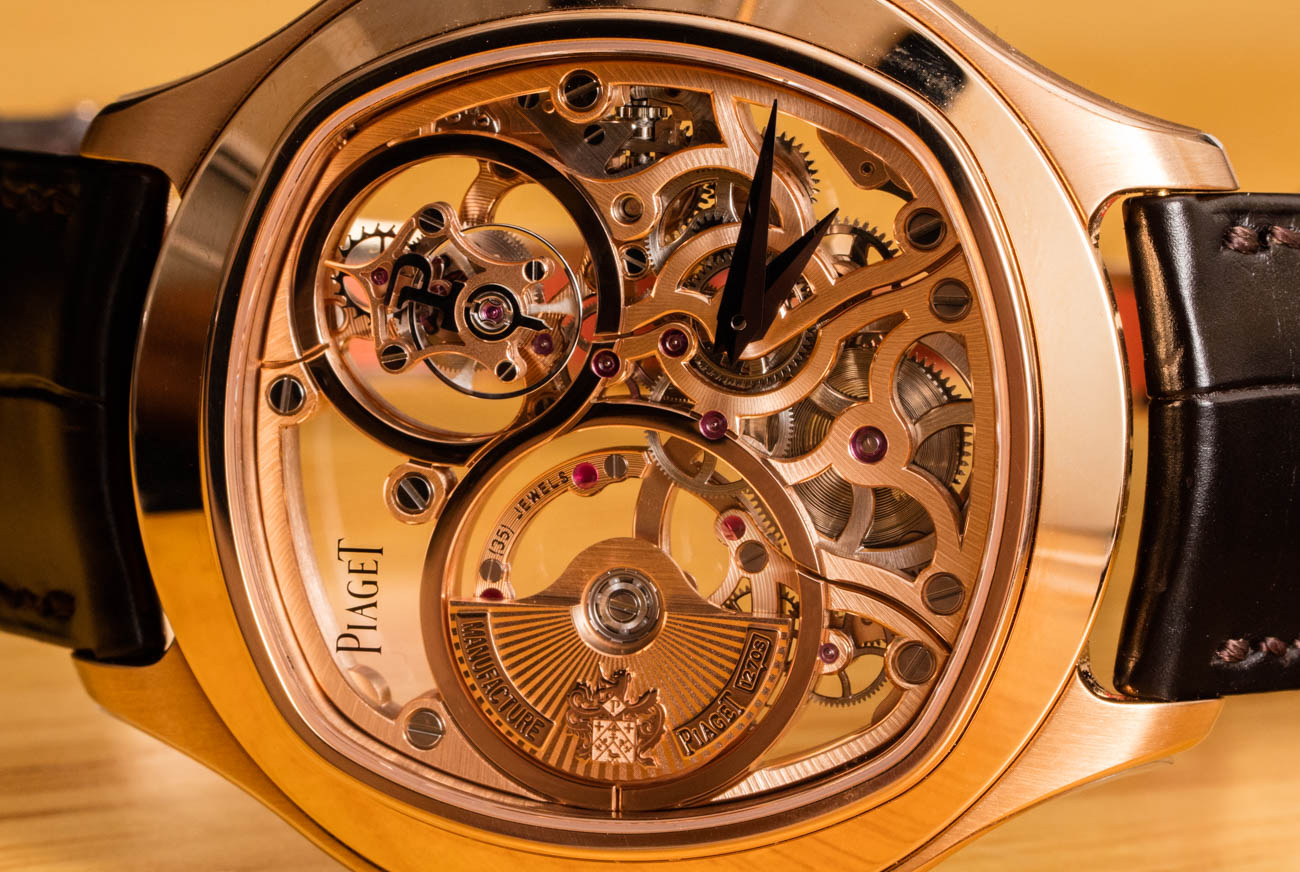 The Emperador Cushion shape is so nice that Piaget decided to use it as the base of its more recent Piaget Polo S sport-style watch collection. I still think these “black-tie” Emperador Cushion cases do it a bit better, but the round case with cushion dial look is a signature Piaget aesthetic that I think more wrists would benefit from trying out.

As a “statement watch,” I think the Emperador Cushion Tourbillon Skeleton has help us well. Piaget can still claim to produce some of the most beautiful and elegant high-complication watches out there — and no one will ever call them boring. The overall appeal is however a bit “poetic,” which, to me, means it is open for interpretation. Piaget takes a decidedly passive approach to deciding who such a watch might be best for. This allows the confident man with enough occasions to wear a formal watch — and an appreciation (as well as budget) for products that combine technical and craft excellence — to discover and select an Emperador Cushion Skeleton Automatic all by themselves. I would imagine that if two people ever ended up at the same event both wearing this Piaget watch, they could very well have little else in common. 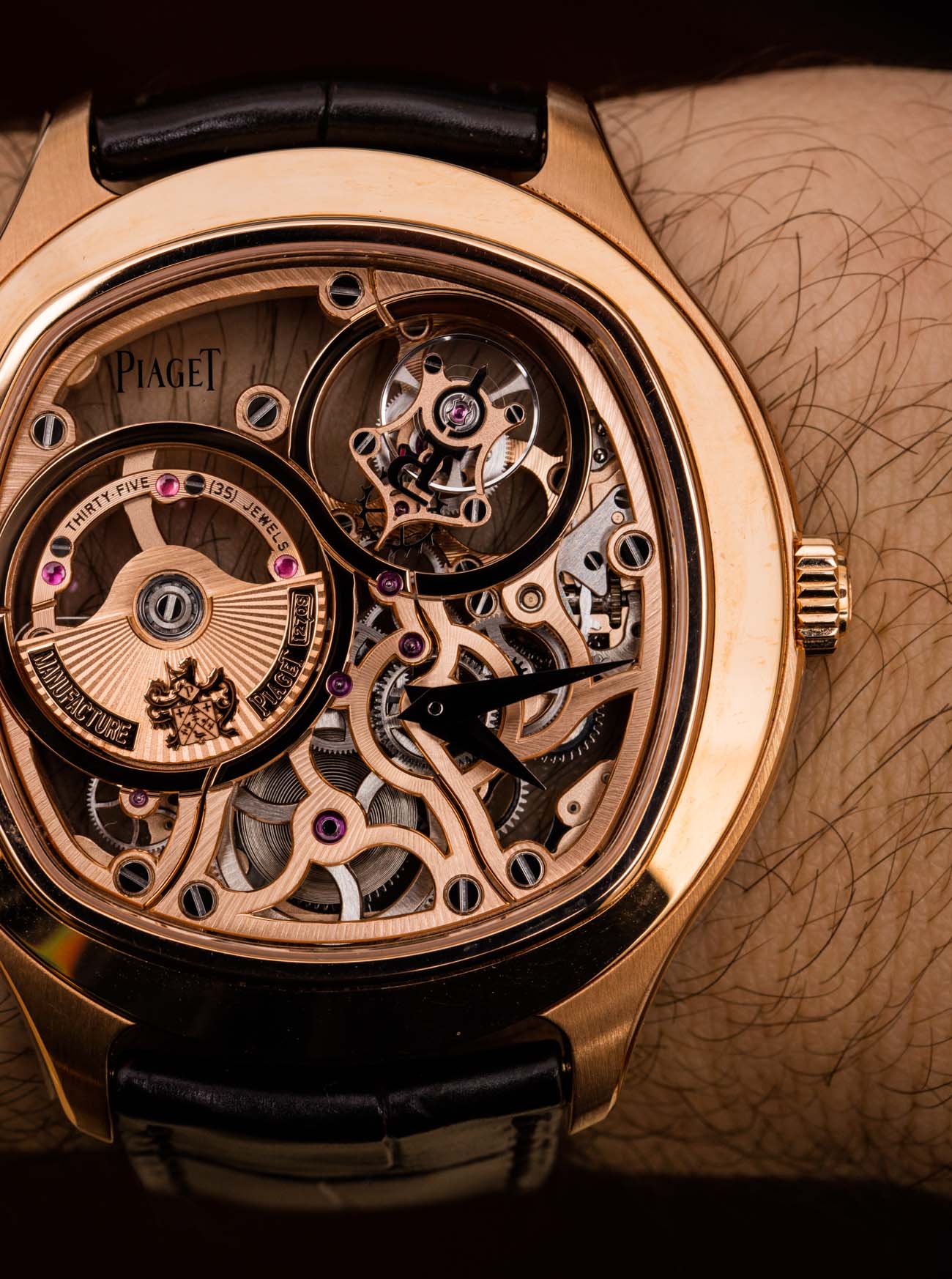 In such ways, the Piaget Emperador Cushion Tourbillon Skeleton is the most Swiss of watches. Forget that Piaget is, indeed, located in Geneva. What I mean is that the watch both intensely focuses on offering an impressive presentation and, at the same time, serves up chilly discretion in regard to describing details about its inner personality. Call that chrono-flirting, if you will. A watch that flirts? Now that is a Swiss timepiece at its finest. Price for the Piaget Emperador Cushion Tourbillon Skeleton reference GOA40042 is $282,000 USD. Learn more at the Piaget website here.