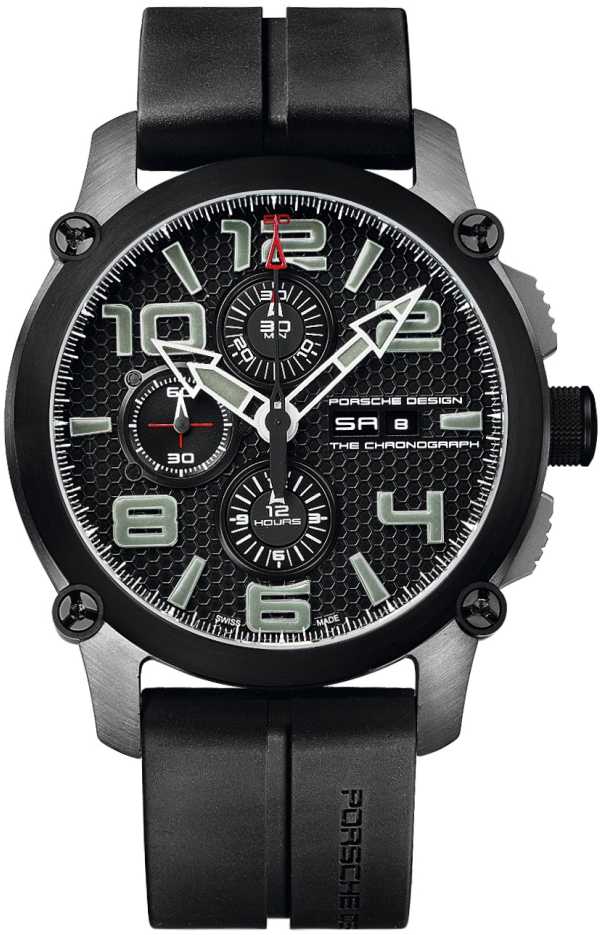 The recent designers of this Porsche Design P’6930 watch are quite lucky. Lucky in that they more or less didn’t have to do to much to make this timepiece look good. Being quite complex, this design was probably a pain to come up with properly when it was designed. The watch is based on the hard work of Porsche Design when they worked on the P’6910 Indicator Chronograph. This amazing piece that came out a few years ago was an extremely expensive digital chronograph watch (that stole my heart). I discussed the P’6910 here. “The Indicator” as it was commonly known, was priced at about $120,000. It is still sold today, but only if you special order it from Porsche Design.

After the P’6910 came the P’6920. This was a rattrapante (split second) style chronograph version of the same case that shared the look of the P’6910. It was less expensive, but kept the lineage of the collection going. Now in 2010, Porsche Design offers an even more accessible option with the P’6930 Chronograph. What is interesting is that all the models have a Swiss ETA Valjoux 7750 movements in them – some just more modified than others. The P’6930’s 7750 is decorated and has a special Porsche Design “wheel” automatic rotor on it. The P’6910 on the other hand had a 7750 that was incredibly modified for the digital chronograph and power reserve complications. Currently Porsche Design indicates that the P’6910 has an Eterna Calibre 6036 movement in it.

Not everyone can see themselves wearing the Porsche Design P’6930 (which I am just going to refer to as the 6930 from here on out), but everyone seems to like it. Porsche Design did a great job initially with making a timepiece with a standout design that draws a lot of attention – but at the same time is very usable.It is hard to get this combo right, but then again – we are talking about Porsche Design. According to Porsche Design, the original 6910 had a style that was based on the Porsche Carrera GT super car that came out around the same time as The Indicator. See a resemblance? Well, there is a thematic similarity – they are both highly attention grabbing. The 6930 of course continues that look and it still feels modern and enjoyable. Two things stood out to me when I first looked at the watch in person. One was the very nicely AR (anti-reflective) coated sapphire crystal that makes looking into the dial so clear, and second was the dial itself. The dial is not only very easy to read due to the large indicators and well suited black/white contrast, but also is wonderfully three dimensional. It starts with the honeycomb pattern on the dial, is appreciated via the multi-level subsidiary dials, and extends to the applied hour markers. Touches of red enhance the feel of the dial, while the stylized look of the large hands and hour indicators just feel good to the eyes. Porsche Design clearly invested time into all of these elements. There is uniqueness here in terms of a look that is exclusive to Porsche Design, and I really appreciate that. Lume on the dial is intense – there are few easier to read dials at night. A really cool design feature is that the outermost minute and chronograph second scale is actually applied under the sapphire crystal as opposed to the dial itself.

Porsche Design decorated the Valjoux 7750 inside of the watch quite nicely. Decor features include Cote de Geneve stripes, perlage, and blued steel screws that are quite dark they almost look black at times. Of course there is the awesome looking automatic rotor that looks like a wheel and has a fantastic level of detailing to it. The movement is also COSC Chronometer certified. No doubt the 6930 is a large watch. The case is 47mm wide, and looks as big as it is loud (over 17mm thick and water resistant to 50 meters). Though it is really comfortable and light as well. The case in PVD coated titanium. There are two versions of the case, one with less PVD and slight different colored dial with gray lume. The all black case is my pick. Porsche Design is clever about the use of different finished. When you apply a brushed or polished piece of metal with PVD, it looks different. As such, while the case is black, some areas of polished, while others are done in a more matte finish. This helps the overall complex look of the case construction look all that much better.

Like I said, the watch is really quite light on the wrist – almost deceptively so. The case also uses PVD black titanium screws on the back and bezel. Note how short and stubby the lugs are. This helps the watch from overpowering smaller wrists and looking too large when wearing it. I love how it looks and feels when wearing it myself. Chronograph pushers are meant to look like pedals on Carrera GT car. That connection doesn’t really interest me much, but they do look nice. Their shape visually integrates with the screw down crown and overall the case and dial together have a lovely cohesive look to them. Porsche Design matches the watch to a high-quality rubber strap that has a design you’ll agree matches the case. Porsche Designs smooth modern minimalism is most apparent here in the look of the strap. Note the indented sides of the strap to match the sides of the watch case. Under the strap is a tire tread pattern. What I don’t like is that the strap is one of those “cut to length” varieties. The watch does have a cool looking buckle, and when sized properly it does fit well, but overall I tend to always prefer straps that tuck rather than need to be cut to size.

My time with the Porsche Design P’6930 Chronograph was very fulfilling. The watch is more than just a P’6910 with a less expensive movement. It does have differences and Porsche Design’s attention to detail is great. Don’t forget that it is actually Eterna that builds the watch for Porsche Design. Price is high at $10,800 – buy you get a lot of bragging rights and attention for your money. Porsche Design has a rather wealthy list of customers, so I don’t think this stunning timepiece will have too hard a time finding a home after people put one on their wrist.