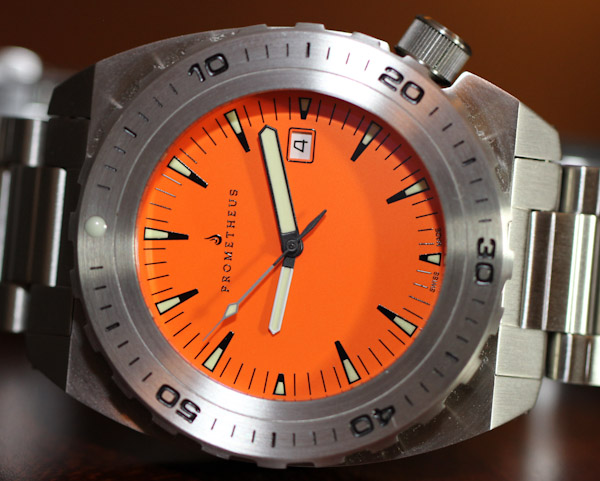 Up to now the Manta Ray is the most impressive watch Prometheus has released in terms of features and hardiness. I’ve reviewed other Prometheus watches here on aBlogtoRead.com and really like where the brand is going. There is a sincerity to the design and a practicality to their concept which is appealing to myself and others. The Manta Ray is their new flagship diver watch and certainly looks it.

Anyone picking up a Manta Ray will no doubt notice the watch’s impressive heft. The large 44.50mm wide case is thick with very broad lugs. It sits tall on the wrist and very much looks like an instrument. The cases looks both modern and retro with its brushed surfaces and angular edging. Large screws line the side of the steel bracelet adding to the piece’s technical feel. This is really not a watch for the feint of heart, and I love that fact. 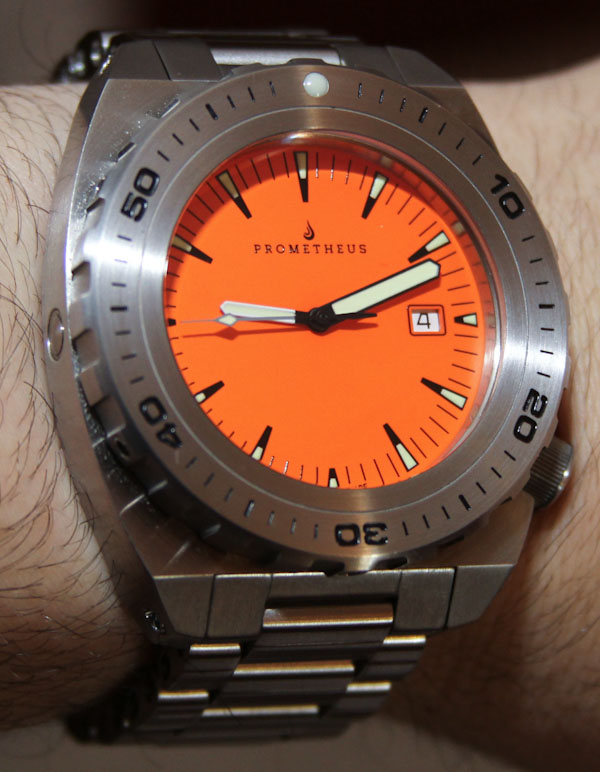 Durability features are pretty impressive for the price. The case is water resistant to 1000 meters and has a built-in automatic helium escape valve. It has a sapphire crystal and easy to operate rotating diver’s bezel. On the dial is SuperLumiNova and legibility is pretty good. The bracelet features an easy microadjusting extension system as well. Some of these are parts that exist in other watches but it is good to see that Prometheus choose wisely when putting the Manta Ray together.

See here is the watch with the brushed steel bezel but Prometheus actually supplies it with a second black bezel. The idea is that the user can switch them out as often as they like. The process does require tools, but I like that Prometheus offers the extra part as an option. The same Allen (hex) wrench (which does not come with the watch as I understand it), must be used to adjust the bracelet. This is a less than fun operation that requires a clamp as you need to secure the both sides of the screw-bar style link to unscrew it. There are also a lot of screws as you can see. Ideally you only need to do this one time, or you can just send it over to your local watch repair person to size for you. 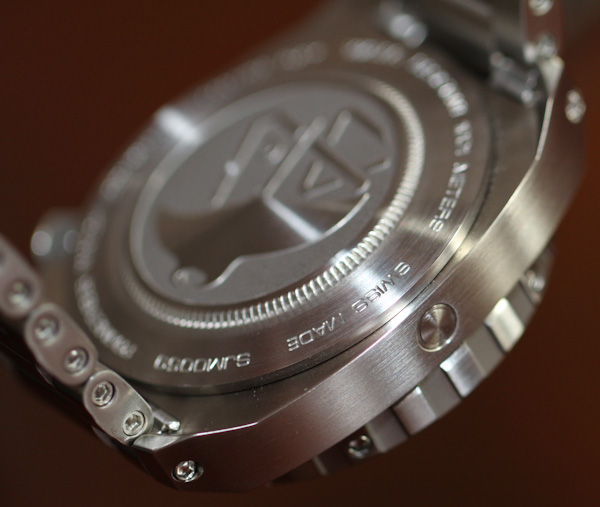 On the back of the watch is an engraved caseback with a manta ray motif. I discuss this more in the video portion of the review. Inside the watch is a Swiss automatic 2824-2 automatic movement. Really nice to see that feature for the price of the watch. One of the things that Prometheus wanted to offer with the Manta Ray was a series of dial options. There are actually a total of eight dial styles to choose from. Two of them are black, two of them are orange, and two of them are white. This model for example has the Orange Dial 1O.

The different dials vary in color as well as the hour indicators. The hands are meant to be very legible with the minute hand almost dwarfing the hour hand. On this version the hour hand is not outlined in black as it is on other dials. That makes the hour hand look a bit puny. I would have liked for it to be larger. In fact, while it is still very legible, the hands could have easily been longer on the Manta Ray. 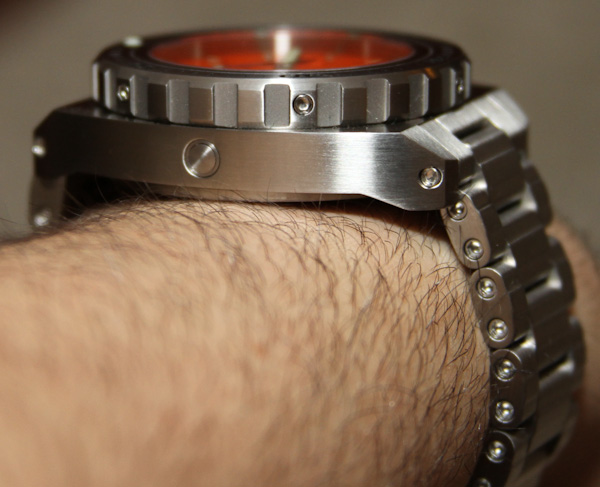 The dials are nice, but probably the only thing I would have suggested for Prometheus to improve. They feel a bit flat in my opinion. This is especially due to the depth of the dial and how the case is so big and chunky. There are other versions of the dial with applied hour indicators that might feel less flat. It isn’t a big deal but something worth mentioning.

Overall detailing all over the watch is something you’ll enjoy. The large crown with its engraved end and 4 o’clock placement is a certain plus. The ratcheting style extension system on the bracelet is a very handy feature as well. Especially when you want a bit of a looser fit on the fly. The style of the bracelet with all the screws makes it look indestructible, and it is further comfortable to wear. 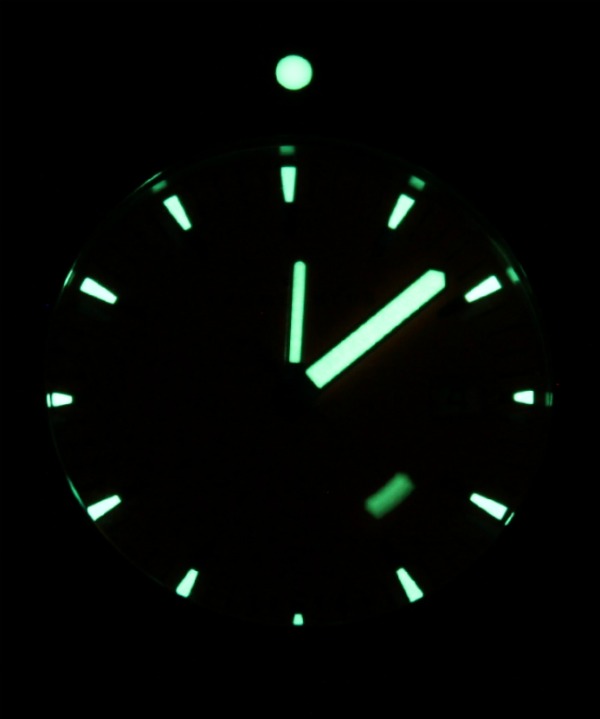 While not without its quirks, this is probably the best watch Prometheus has made to date. The impressive feature list, hardy design, and Swiss movement make it a serious winner for the price. How much is it?  That all depends on whether you are in Europe or outside of Europe because of the VAT. In Europe the Manta Ray is priced at $784.93, and outside of Europe without the VAT it goes down to a super attractive $648.70. You can get them online via Prometheus’ website.