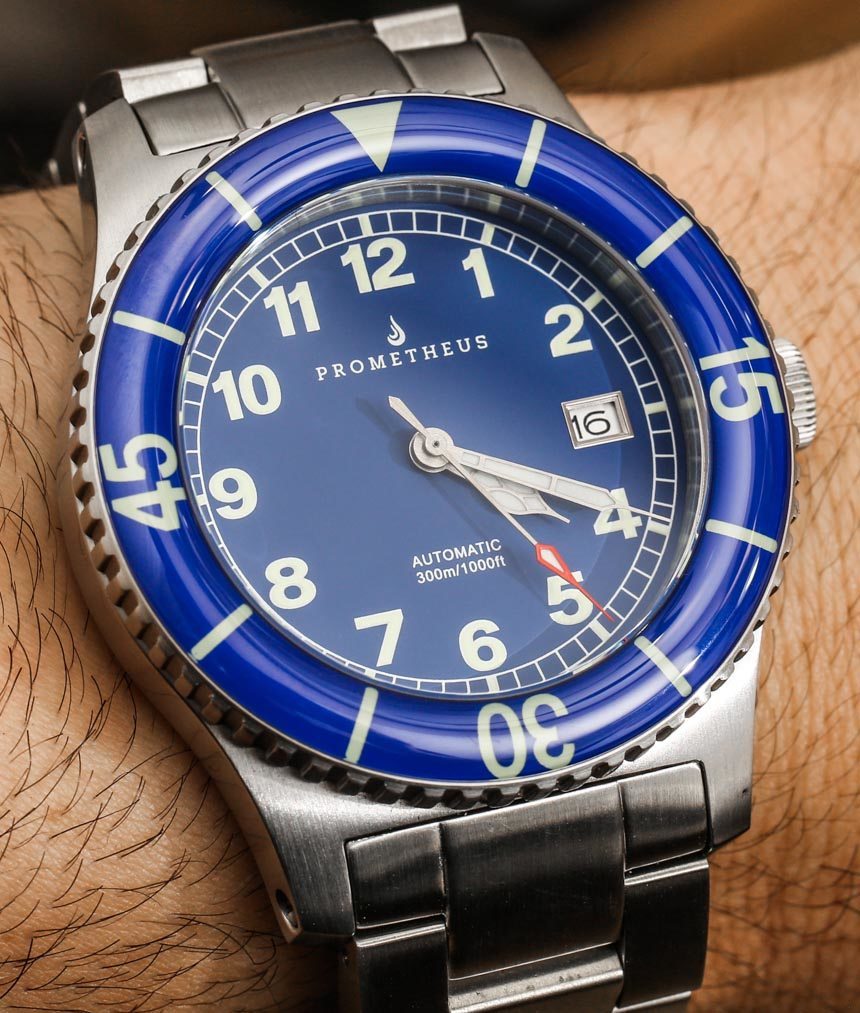 I recall the first watch Carlos Carvalho produced years ago under his then new Prometheus brand, called the Ocean Diver, that we reviewed here on aBlogtoWatch. About five years later, Prometheus watches has beat the odds for a small independent watch maker and continues to release new timepieces, almost prolifically. We can’t review all their new creations, but here is a review of the Prometheus Sailfish timepiece in blue.

The Prometheus Sailfish is among the brand’s many diver-style watches and it comes with a black, gray, yellow, and also blue dial, as seen here. It is a very straight forward diver with some interesting features, and I think it is a great value if the design speaks to you. I’ll start by saying that dive watches with full Arabic numeral hour marker dials are very rare – so if you are into that (which some people are) the Prometheus Sailfish is an option you’ll certainly want to take a close look at.

The Prometheus Sailfish is one of those rare watches we review (with a metal case) that we get to include in our category of watch reviews under $500. Typically, watches in that arena are plastic-cased digital watches. In fact, to have a 300 meters dive watch with a mechanical movement that is under $500 is rare, unless you are looking at some of the more basic Seiko dive watches. Having said that, the Sailfish is, in fact, powered by a Seiko movement.

Inside the Prometheus Sailfish the brand uses a Japanese Seiko SII caliber NH36 automatic mechanical movement. With automatic winding as well as manual winding, the movement operates at 3Hz (21,600 bph) and has a power reserve of about two days. For the money, this is the type of movement we would expect, and should perform admirably for this use. Use of a Swiss movement would have the price jump up a lot. The movement offers the time and date on the dial – which, thankfully, is extremely legible. 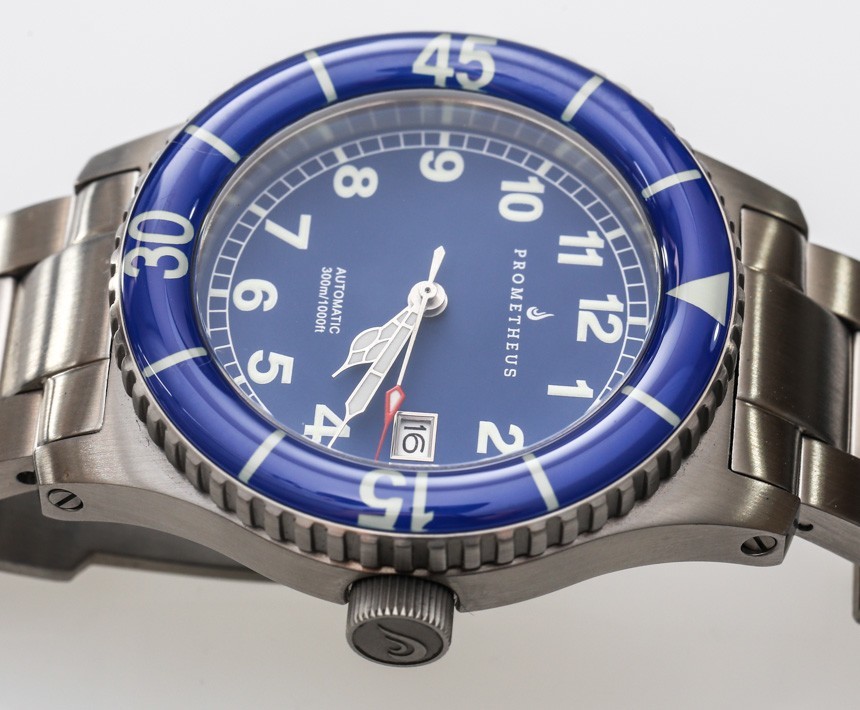 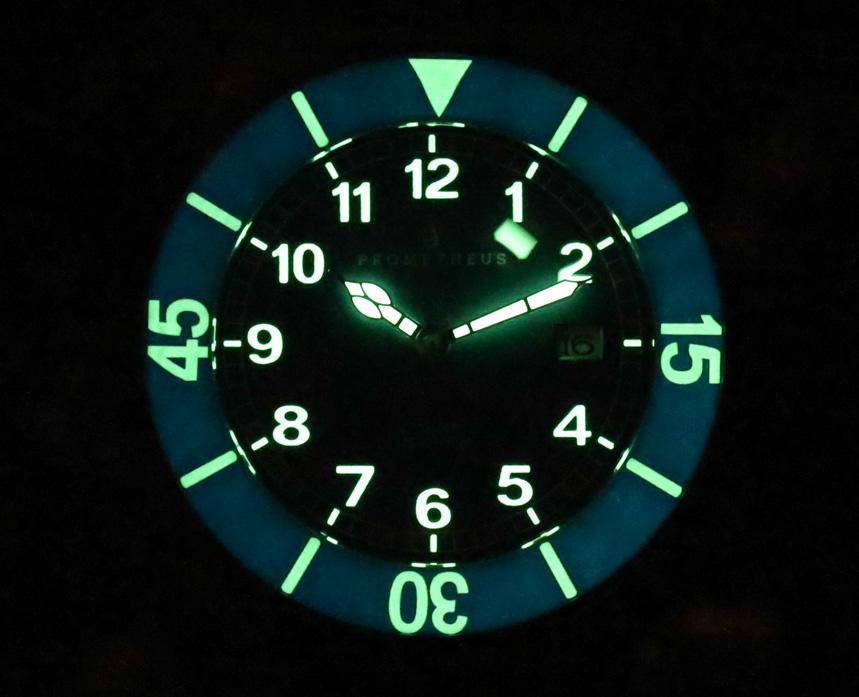 From a design standpoint, the dial of the Sailfish is a sort of mixture between a ship’s deck clock and a dive watch. The combination is interesting and makes for a lot of legibility, but something about it lacks the sexiness you sometimes get from a tool watch. Having said that, the dial doesn’t really break the rules with its properly sized hands and copious amounts of lume. As you can see in the above luminant shot, the Prometheus Sailfish dial is rather impressive.

Whatever the dial of the Sailfish lacks in prettiness it makes up for in cold utility. Like I said, reading the dial is very simple, and some people who find reading analog dials to be tricky will love the full scale of Arabic numerals. Around the dial is a rotating diver’s bezel that is also well done. Here, Prometheus takes inspiration from the Blancpain Fifty Fathoms with a rounded sapphire crystal over the bezel – another surprise feature at this low price point. 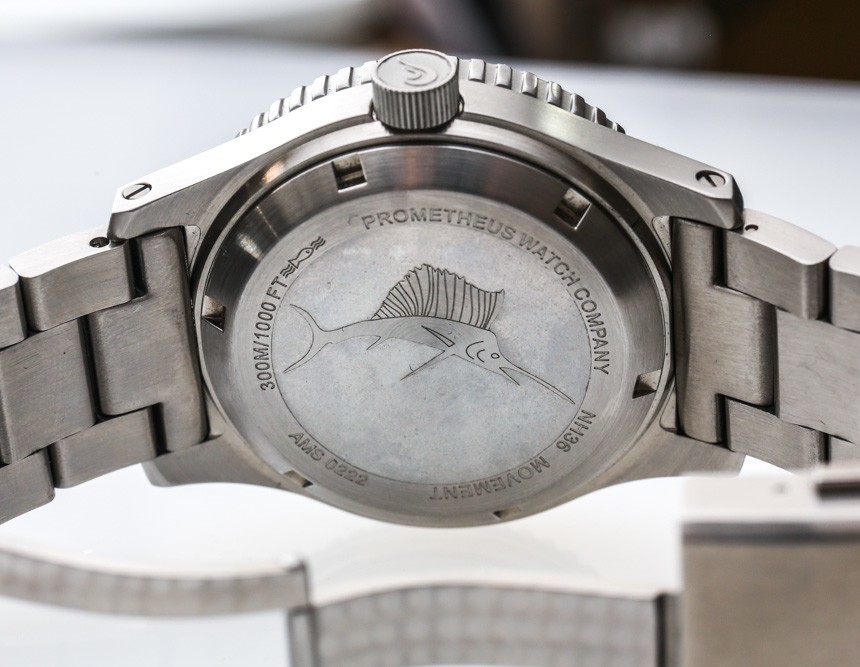 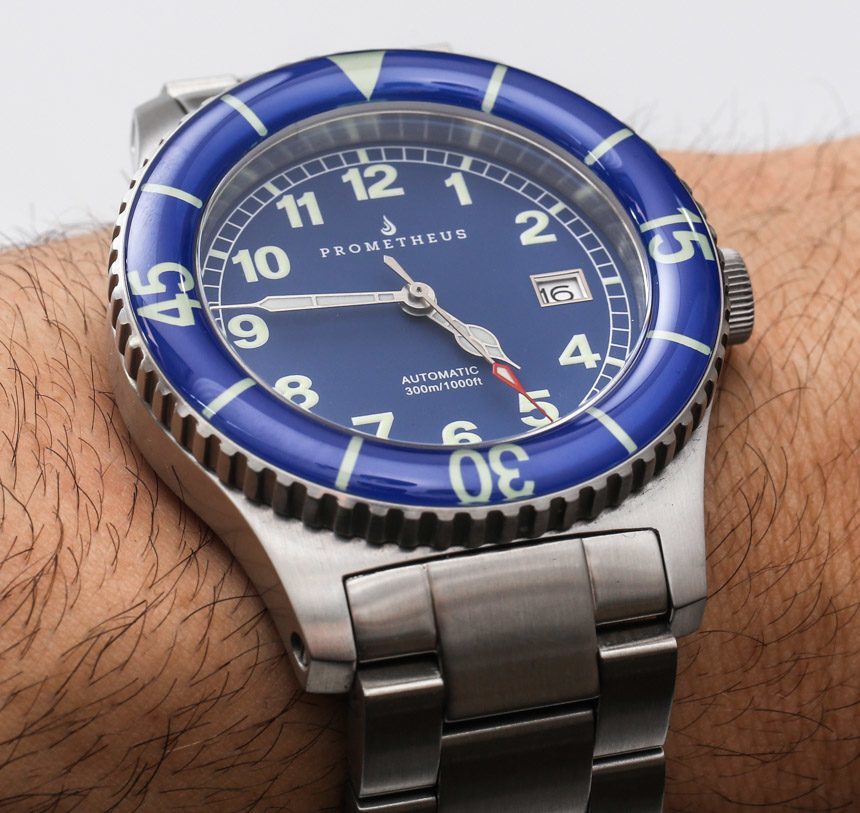 Rounded sapphire crystal bezel inserts are much more expensive than the flat ones you sometimes see. The minute scale is further painted in luminant, and it moves uni-directionally rather smoothly and securely. Though, sometimes looking at the simple, strong looks of the bezel and dial, I wonder why Prometheus used retro-style hands. I think the entire personality of the Sailfish would have been different with hands that seemed to fit the overall dive watch theme of the piece a bit more.

At 42mm wide, the Prometheus Sailfish isn’t a super large watch but it does wear heftily thank to the weighty case and large steel bracelet. My main issue with the case of the Prometheus Sailfish is the degree to which the lugs stick out (the case is 52mm long). They are not only very widely spaced, but they don’t curve down as much as they should. This creates some odd proportions in the watch visually, and from a wearing perspective, the case is going to extend too far out for small and most medium-sized wrists. With that said, I would say that people with larger wrists will find the Sailfish comfortable, but those with smaller wrists should certainly try one on before committing to purchase. 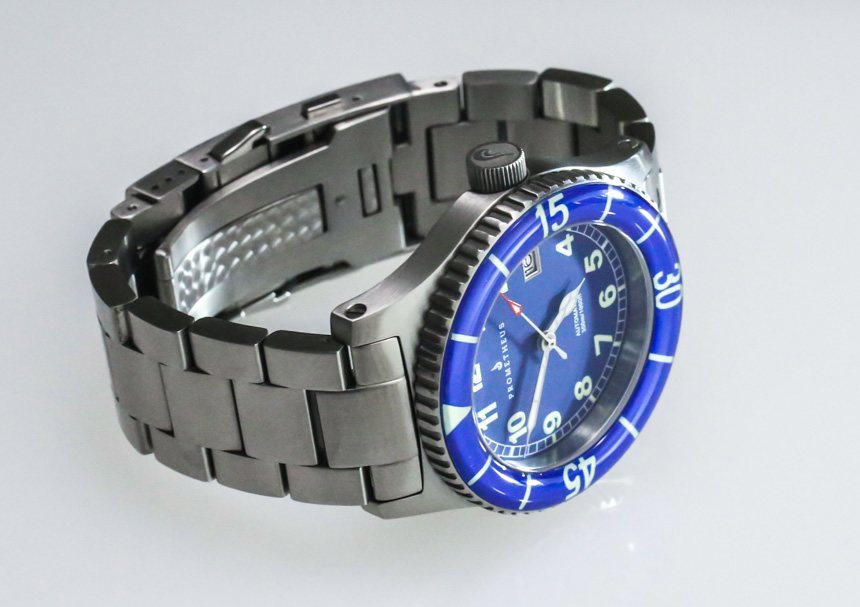 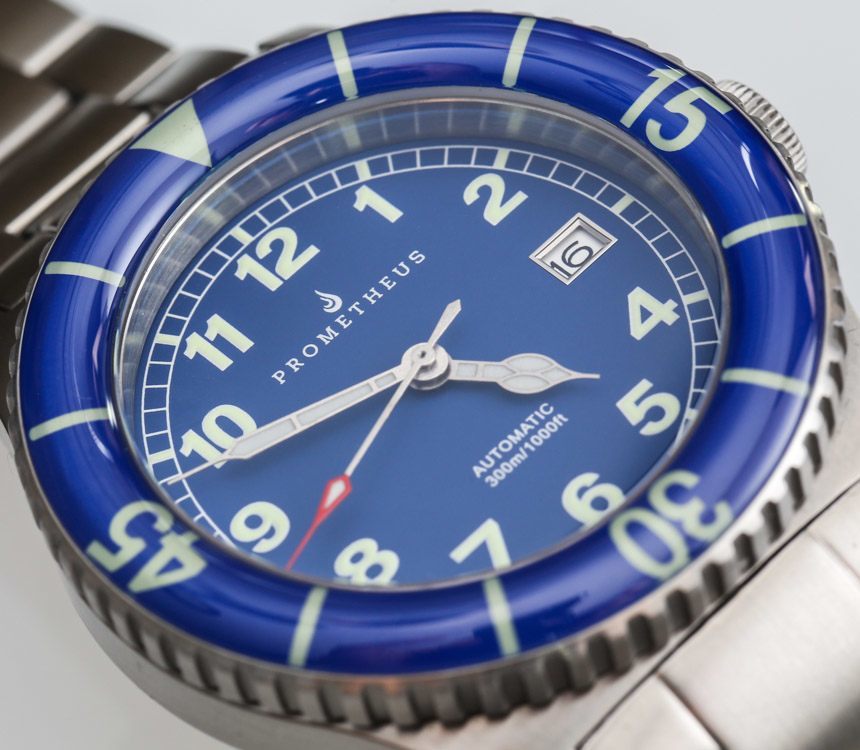 Dial and case detailing are overall pretty good. In addition to the 300 meters of water resistance, the case has a sapphire crystal over the dial, and the crown is screw down. The steel bracelet is chunky, and Prometheus is nice enough to include a deployant clasp with a sliding micro-adjust system that doubles as a diver’s extension. This is even more value but the bracelet does have some rough edges and might benefit from a bit of polishing that would make it more friendly to the touch. This is a rather common issue with watches in this price range because more polishing and case refinement can actually add a lot of cost. 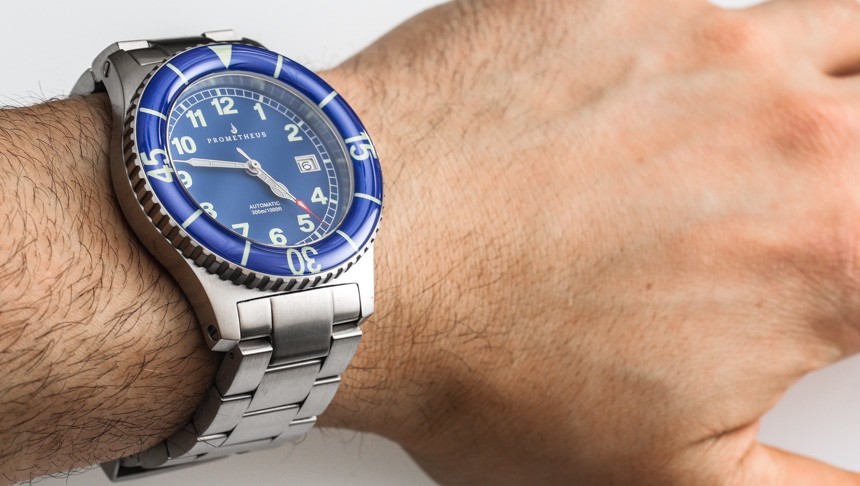 Assuming your wrist is suitably sized for the Prometheus Sailfish, it might look cool on a rubber strap or NATO-style strap. Further, I suspect that the black or gray versions of the Sailfish might look pretty good as well, and possibly a bit more fashionably versatile than the blue version. It is actually a fact that while blue watches are very popular, they are also very difficult to get right. So that means sometimes the same watch in black will look “better” than a blue version by mere virtue of how colors are represented in timepieces.

Necessary Data
>Brand: Prometheus
>Model: Sailfish
>Price: 339 Euros (about $432 USD).
>Size: 42mm
>Would reviewer personally wear it: Sometimes.
>Friend we’d recommend it to first: Dive watch lover on a budget with larger wrists who enjoys Arabic numeral dials.
>Best characteristic of watch: Lots of value for the money and highly legible dial.
>Worst characteristic of watch: Doesn’t fit as well on small wrists as it does on larger wrists. Dial is useful but lacks a degree of elegance. Bracelet has some sharp edges.