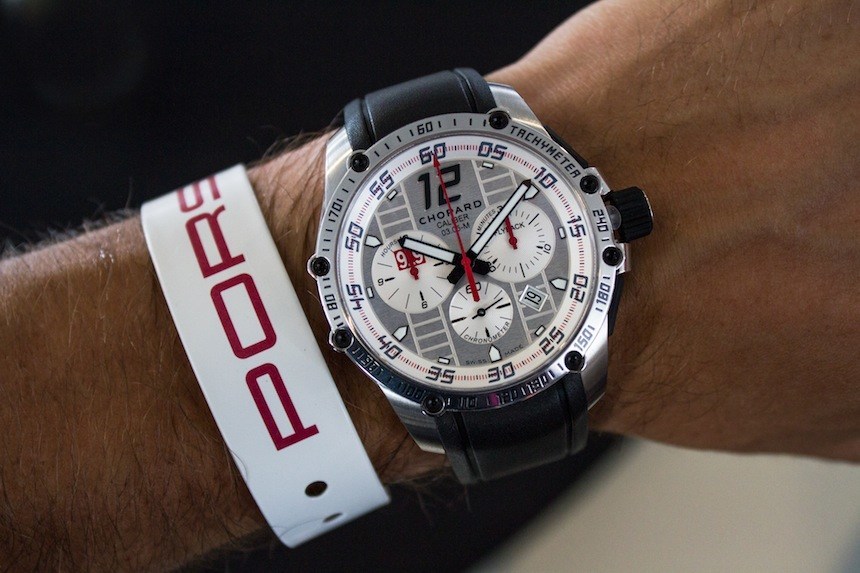 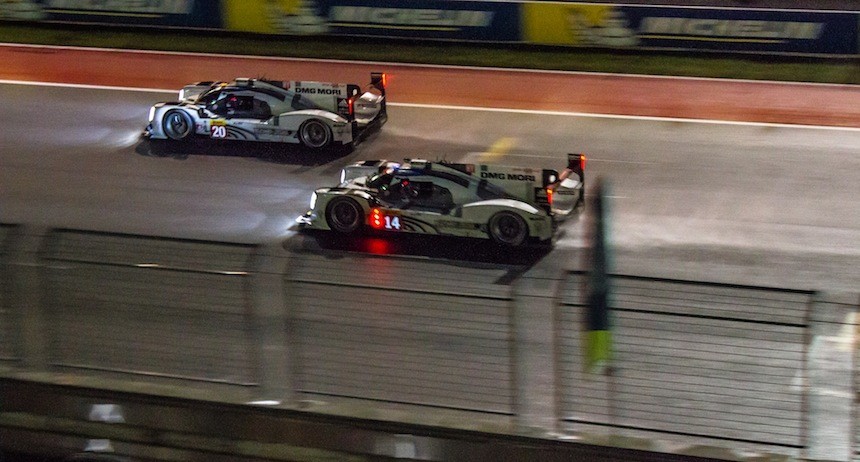 In just its second year running Texas’ Circuit of the Americas, the FIA World Endurance Championship (WEC) has a lot to offer any motorsports fan that can make it to Austin. One of just eight stops on their international tour, the 2014 US leg of the WEC was held over the September 20th weekend, and we tagged along with Chopard to take it all in. Chopard is a sponsor for Porsche’s return to endurance racing, for which they’ve brought a proper weapon – the brand new 919 Hybrid.

First, some context and my attempt at a brief history lesson. Endurance racing may not be as popular in North America as Formula 1 or Nascar, but it has a fascinating history, and the format requires no less in terms of technology, skill, tactics, and raw cash. Of the eight stops on the calendar, seven of the races are six hours long, the exception taking place in France for the famed 24 Hours of Le Mans. The 24 Hours of Le Mans has been held since 1923 and is one of the most famous, prestigious, and difficult races in the world, with cars lapping for 24 straight hours. There are four running categories (types of cars) competing in an FIA WEC race, including the LMP1, LMP2, LMGTE Pro, and LMGTE Am. This means that in the 6 (or 24) hours of racing, there are actually multiple races taking place, with championships for drivers, teams, and constructors. 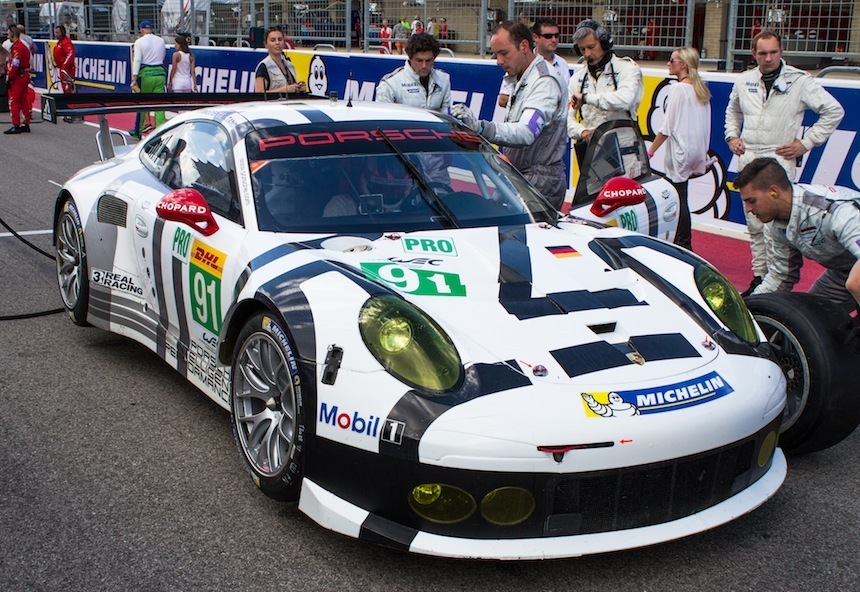 For 2014, the Porsche factory team is running one LMP1 team with two 919 Hybrid race cars (car #20 and #14) in addition to two LMGTE class 911 RSRs under the Porsche Manthey team (#91 and #92). Each car has three drivers that will split the load of the 6 hour running time for the race. While the 911 RSR is essentially a race-prepped Porsche 991 911 with a 470 hp 4 L flat six, a six speed racing gearbox, and extensive use of carbon fibre for weight saving, the 919 Hybird is part of the LMP1-H class of prototype race cars and has little in common with most road cars. 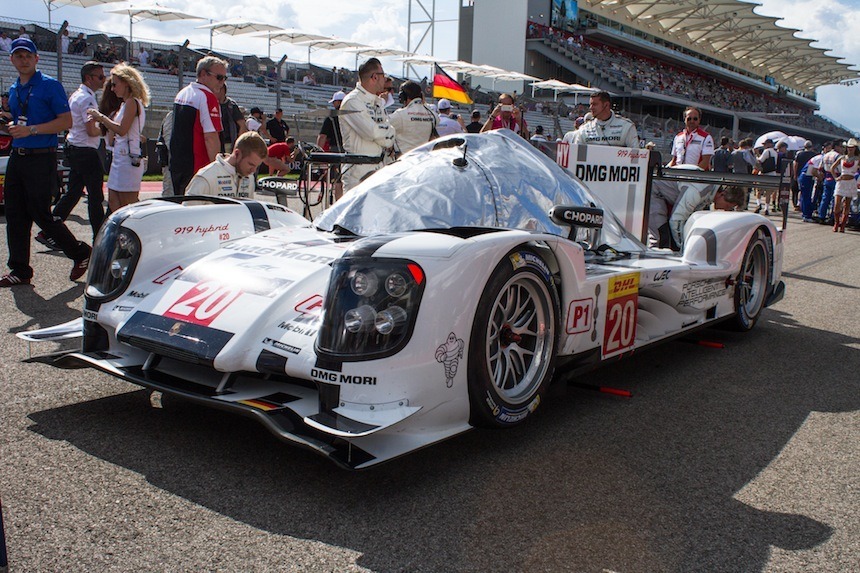 As part of the LMP1-H category, the 919 has both a traditional internal combustion engine and an electric power plant with an active kinetic energy recovery system (KERS). The 2 L turbocharged V4 engine creates no less than 500 hp, and the electric motor supplies at least an additional 250 hp into the mix (for competition, these numbers are purposely vague). Furthermore, the 919 Hybrid is rear wheel drive but can manage all wheel drive via the electric KERS system on the front axel. Rendered in carbon fiber with a honeycomb aluminum core, the 919 is brand new for 2014 and represents the next generation of Porsche’s endurance racing platform. The 919 name follows Porsche’s history, as the 917 was the first Porsche to have an overall win at Le Mans (1970, and again in 1971) and the 918, launched in 2013 and seen below, is Porsche’s latest supercar that uses hybrid technology to become one of the best performance cars in the world. 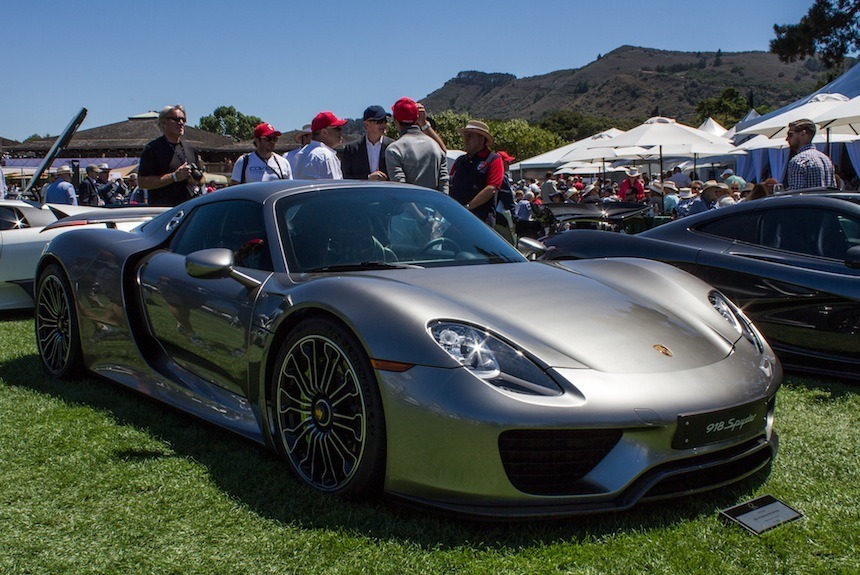 Technology aside, the 919 Hybrid is a big deal because it marks Porsche’s return to endurance racing. To make a long story as short as possible, despite winning the 24 hours of lemans with the 911 GT1, Porsche left factory racing in 1998 due to financial constraints. Porsche is part of the Volkswagen Auto Group, making it part of the same company that owns Audi. Porsche conspiracy theorists allege that Porsche left racing due to an agreement with Audi that allowed Porsche to use the Toureg as the base for their upcoming SUV. In turn, Audi would not have to compete with Porsche in endurance racing. Just four years later, Porsche would launch the Cayenne (which is indeed based on the Toureg). For Audi, prototype endurance racing heated up by 2000, with the R8 and later the R10 TDI dominating for years. With Porsche out of the way, their VAG sister brand had the space it needed to rack up an impressive series of wins within the sport. This is all noteworthy because from 1970 to 1998, Porsche had the most victories (16) at the 24 Hours of Le Mans, the pillar event in endurance racing. 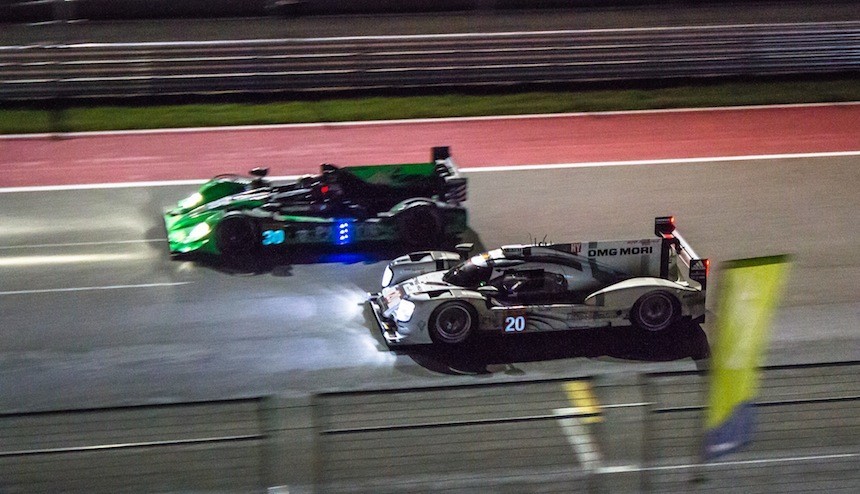 As an interesting side note, back in the ’90s Porsche had even developed a very advanced 3.5 L V10 engine for Formula 1. When Porsche was cut from the Footwork F1 team, they adapted the engine for endurance racing, and by 1998, that V10 had found a home in Porsche’s upcoming 9R3 LMP1 endurance race car. When their racing days were cancelled to focus on selling more road cars, that V10 was again repurposed, this time in the infamously un-hinged Carrera GT (Jalopnik’s got the full scoop here). 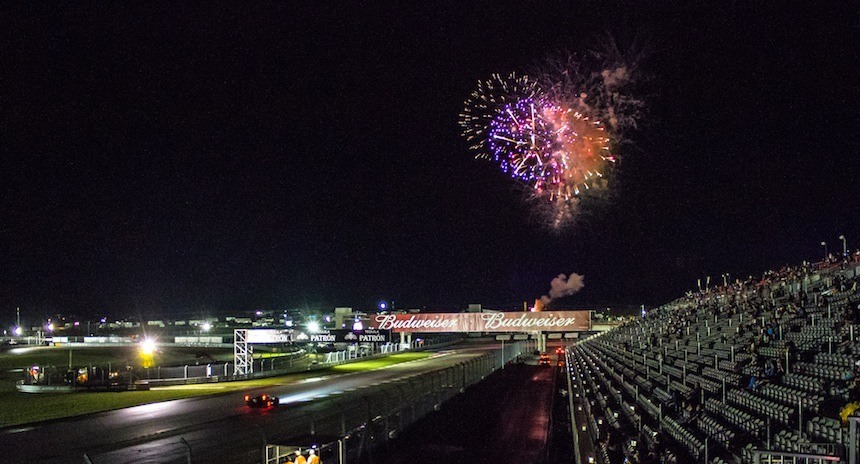 So Porsche has a lot riding on the 919’s 2014 inaugural season, especially as their main competition is Audi and the 2014 season is the first to host the LMP1-H hybrid category. Audi is the 2013 WEC champion and their R18 racecar has been massively successful. During my stay in Austin with Chopard and Porsche, it was the clear that, while these rival teams are friendly, both recognize what is at stake in the new category and and how it relates to the racing history of their brands.

By now, I’m guessing you’ve either retired to the comments to question why I’m writing another car post on a watch blog, or you’ve been following along and you’re asking, “why Chopard?” Chopard has an involved relationship with Porsche that stems from Co-President Karl-Friedrich Scheufele’s love of Porsche (he has even driven a 550 Spyder at the Mille Miglia) to Chopard’s own ambassador Jacky Ickx. If you came to this post because you love endurance racing, or motorsports in general, you already know Jacky Ickx. If not, Jacky Ickx is known as “Monsieur Le Mans” and is a legend within professional motorsports, with six victories at Le Mans, four of those at the wheel of a Porsche. I had the privilege to meet Mr. Ickx at Baselworld this past year, and he is nothing short of a delight and is a fitting ambassador for Chopard’s connection with Porsche.

In honor of that connection, as well as the launch of Porsche’s next generation race car, Chopard was using the 6 Hours of Circuit of the Americas to show off a new limited edition piece. The Chopard Superfast Chono Porsche 919 Edition is a special version of Chopard’s Superfast chronograph that draws inspiration from the Porsche 919 Hybrid. This 45mm wide chronograph uses a 15.2 mm thick steel case with a rubber clad crown and pushers. The bezel is affixed with eight PVD black screws and offers a tachymeter scale befitting its racing inspiration. The dial design of this 12-hour chronograph is inspired by the Porsche Intelligent Design language of the 919. The nine o’clock sub dial carries the 919’s name, and the dial features many red elements that reflect the red badging used for the LMP1 category. The case back is engraved with “Official Timing Partner Porsche Motorsport” and the watch is fitted to a tire-tread rubber strap with a stainless steel folding clasp. 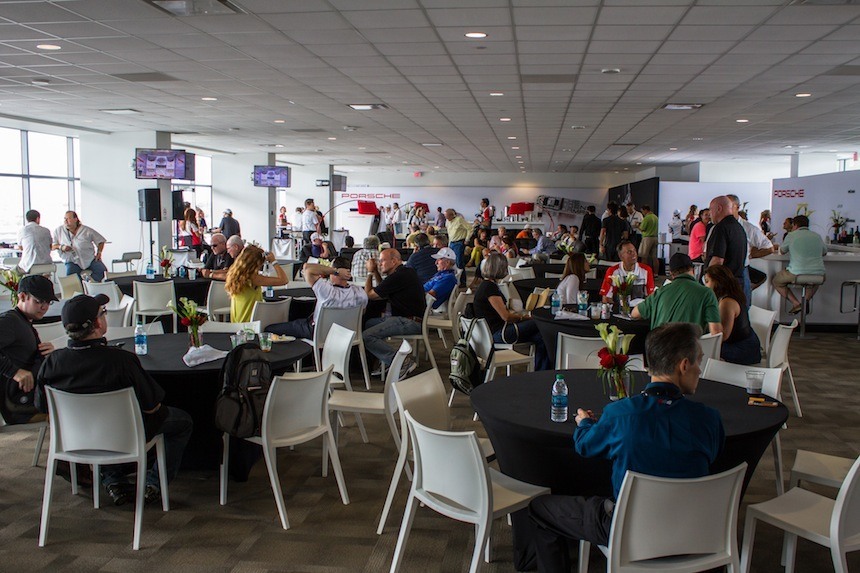 The Chopard Superfast Chrono Porsche 919 Edition uses Chopard’s 03.05-M automatic chronograph movement which features a fully integrated design, flyback capability, a column wheel and COSC certification. The 03.05-M is built by Chopard’s in-house Fleurier Ebauches workshop and has 45 jewels and runs at 4 Hz, with a power reserve of 60 hours. Chopard is no rookie when it comes to racing chronographs, and the Chopard Superfast Chrono Porsche 919 Edition’s movement is the real deal and even boasts some eye-catching skeletonized finishing. 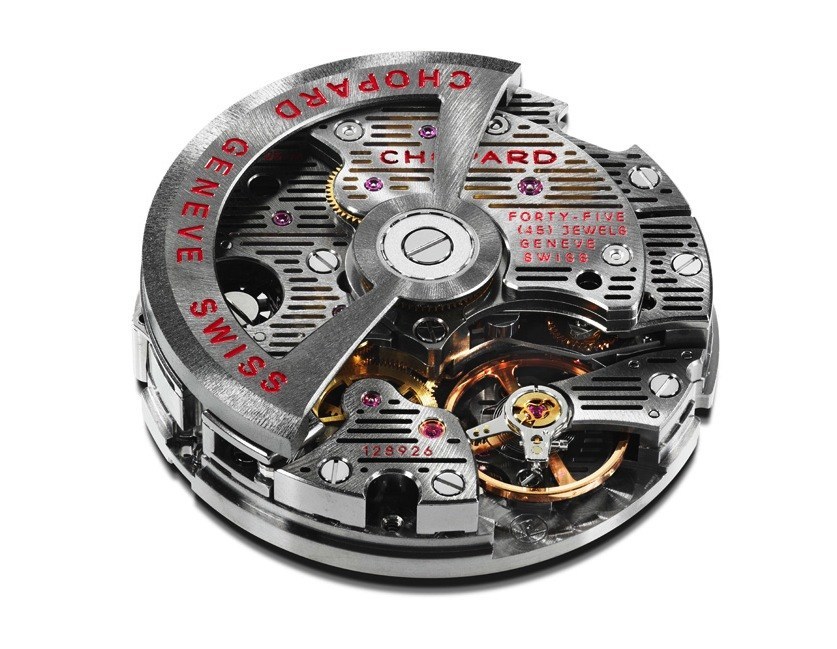 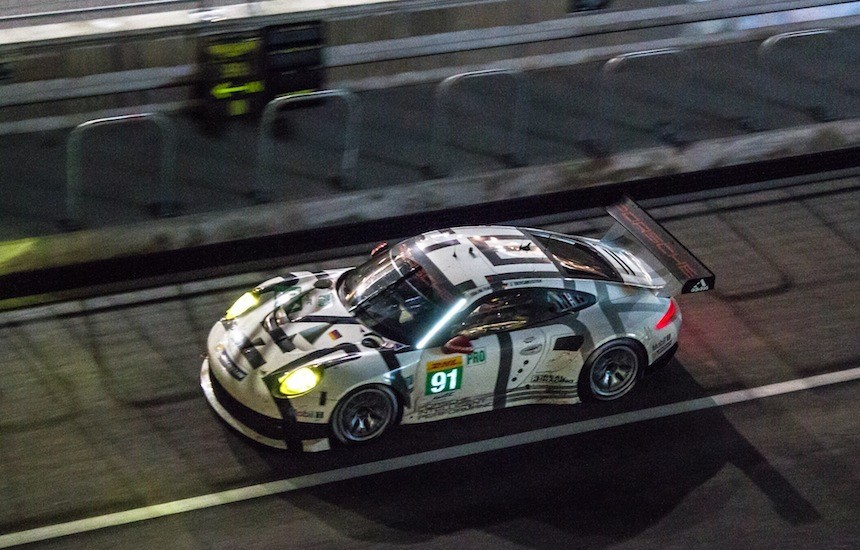 On wrist, the Chopard Superfast Chrono Porsche 919 Edition is quite large with a massive presence that is accented by its bright silver dial. Comfort is good, even on my boney wrist, and the pushers and crown feel great thanks to their rubber coating. Legibility is strong with metallic black time hands and bright red hands for the chronograph display. The hour and minute hands, as well as the markers, offer a luminous treatment and there is a date display between four and five. Along with being limited to 919 units, in-house chronographs don’t come cheap and the Chopard Superfast Chrono Porsche 919 Edition will set you back a cool $12,890 USD. Judging by the crowd that formed in the Paddock Club where the watch was being shown, and multiple guys that asked if #919 was still available, there should be more than enough Porsche racing fans to make this a successful limited edition. 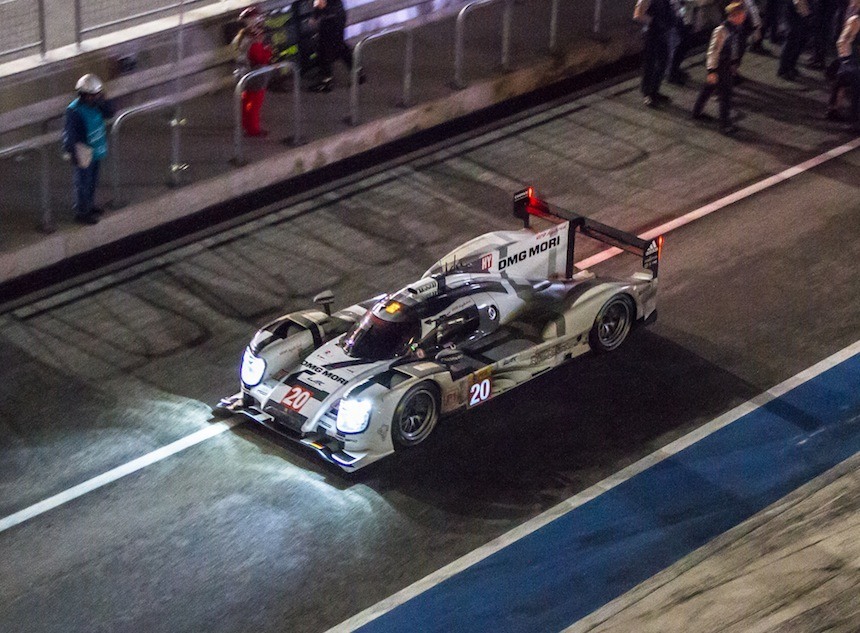 Despite their best efforts, a rather wet six hours in Texas resulted in Audi taking 1st and 2nd in the LMP1 category, with Toyota in 3rd, and Porsche finding 4th and 5th. A successful prototype team is not something that is just assembled and expected to win. This is a competitive time for endurance racing and it takes a considerable investment of time, and a crazy amount of money to fine tune the team, cars, drivers, and strategy (Audi’s program costs $242 million per year). Porsche being Porsche, there is no doubt that they have many wins in their future, but they will have to fight for each and every spot on the podium. To that end, the 919s would later fight their way to third place finishes at both Fiji and Shanghai. 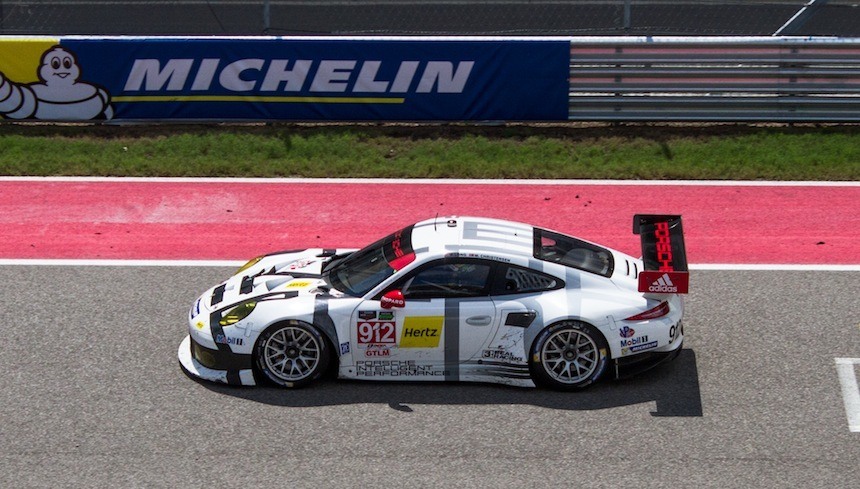 The 919 is an imposing beast up close, the very definition of cutting edge within the restrictions of the LMP1-H category. While “cutting edge” may not be the best way to describe an automatic chronograph, the Superfast collection, and indeed the Chopard Superfast Chrono Porsche 919 Edition, does a good job of employing a somewhat dated concept. Afterall, the golden-age of motorsport also accelerated the birth of the mechanical chronograph and, quite quickly, the rise of the racing chronograph. Much of Heuer’s legacy is built on watches that captured the spirit and flare of auto racing. From the Autavia, Carrera, Camero, and Silverstone, to competition like the Rolex Daytona, racing-inpired watches are a culture all their own. For many years, Chopard has followed suit with their Mille Miglia, Grand Prix de Monaco Historique, Jack Ickx, and Superfast lines. Racing watches are the core of Chopard’s sport watch line up, and it was a treat to see how that love of racing manifests itself in an actual motorsport event.

Many thanks to everyone at Chopard and Porsche Motorsport for the chance to take in a true endurance race and experience the cars and the watches first hand. chopard.com