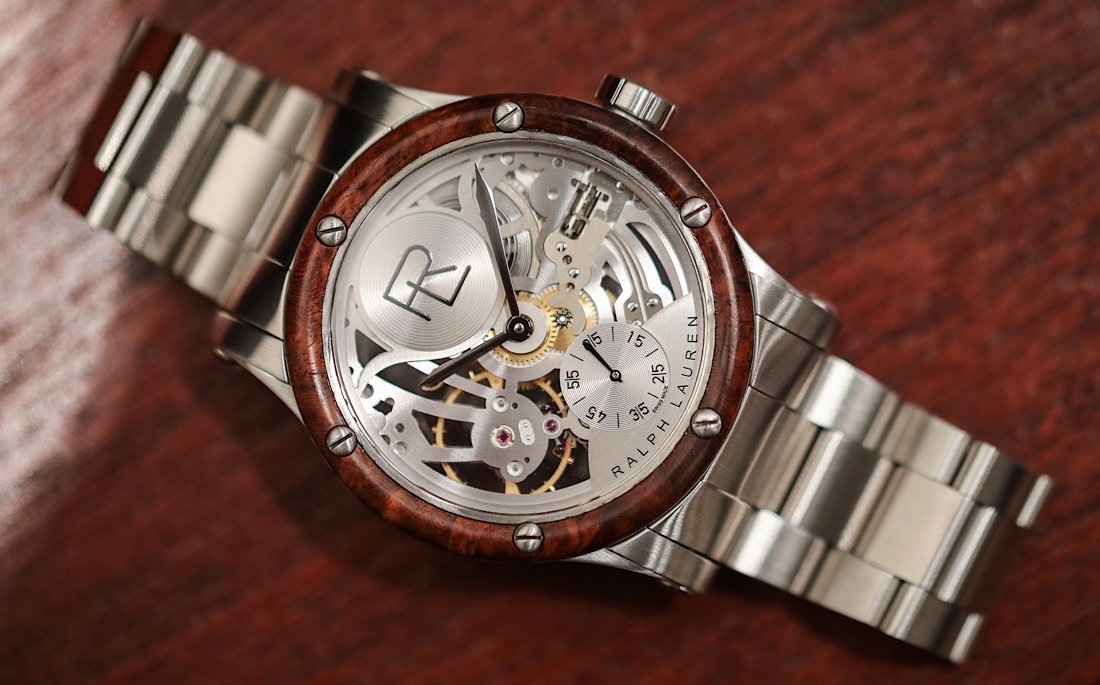 Ralph Lauren is still a name I tend to associate more with polo shirts than watches, but with recent offerings including minute repeaters and double tourbillons, there can be little doubt that the brand takes its watchmaking seriously. Ralph Lauren the man is a collector of rare and vintage automobiles, whose cars have won the “Best in Show” awards at the Pebble Beach Concours d’Elegance twice so far before being exhibited at several museums. In 2015 the brand released some watches inspired by this car collection, the Ralph Lauren RL Automotive Skeleton & Non-Skeleton Watches (Hands-On here). They have followed up this collection with a new steel version this year, the aptly named Ralph Lauren Automotive Skeleton Steel. The Ralph Lauren Automotive Skeleton Steel is visually very similar to its skeletonized predecessor from a few years ago, but instead of a black PVD-coated and bead-blasted finish on the case and movement, this version opts for exposed steel in a variety of finishes. The brand’s “RL” logo at 12 o’clock and the small seconds counter at 6 o’clock feature circular graining, while the movement bridges appear to have been satin-brushed. Perlage and vertically brushed surfaces are also visible through the sapphire caseback, which is an improvement over the rather plain and industrial view offered by the previous RL Automotive Skeleton watch. This version also features hour and minute hands that are “shiny black oxidized” rather than filled with faux-vintage lume, which offers a good contrast against the mostly-steel dial. The signature wooden bezel is still present with the Ralph Lauren Automotive Skeleton Steel, made of a wood called Amboyna burl, which apparently features in the interiors of some of Ralph Lauren’s own vintage cars. The securing screws are also automotive-inspired, and meant to reference “the rivets securing the chassis of a car.” On a more practical level they also provide a measure of legibility to the dial by marking every second hour. The watch case measures 44.80mm by 11.20mm, offers 5 Bar (or approximately 50m) of water resistance, and is delivered with two bracelet options: a 3-link steel bracelet, or a brown alligator leather strap. The “RL” branded crown is also notched for ease of use, which will come in handy as this watch is powered by the manually-wound Caliber RL1967. This calibre was developed by IWC exclusively for Ralph Lauren and then further skeletonized by Val Fleurier, a Richemont-owned movement manufacturer. Although quite attractive to look at, this calibre oscillates at the tepid pace of 18,000 vph or 2.5Hz, which will affect both timekeeping accuracy and the smoothness of the second hand’s movement. The power reserve is also somewhat lackluster by modern standards at approximately 45 hours, so this is a watch that will need to be hand-wound often. A power reserve needle is visible through the caseback, but unlike previous watches in this collection it appears to lack a corresponding power reserve gauge on the movement’s bridge. The Ralph Lauren Automotive Skeleton Steel shows the brand’s growing refinement as a watchmaker, as it’s arguably a more attractively finished piece than previous versions, even though it’s priced considerably less than the previous RL Automotive Skeleton watch. And, although the skeletonization and decoration performed by Val Fleurier is impressive, the asking price of $34,200 certainly limits the buyer pool for this product, I have a feeling that lovers of the uniquely American luxury vintage/automotive style Ralph Lauren has honed will be enamored with this timepiece. ralphlauren.com