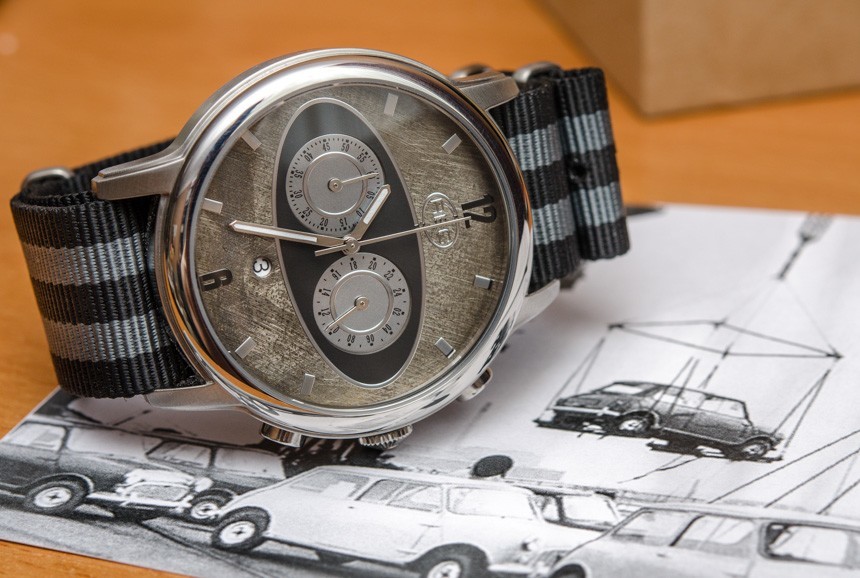 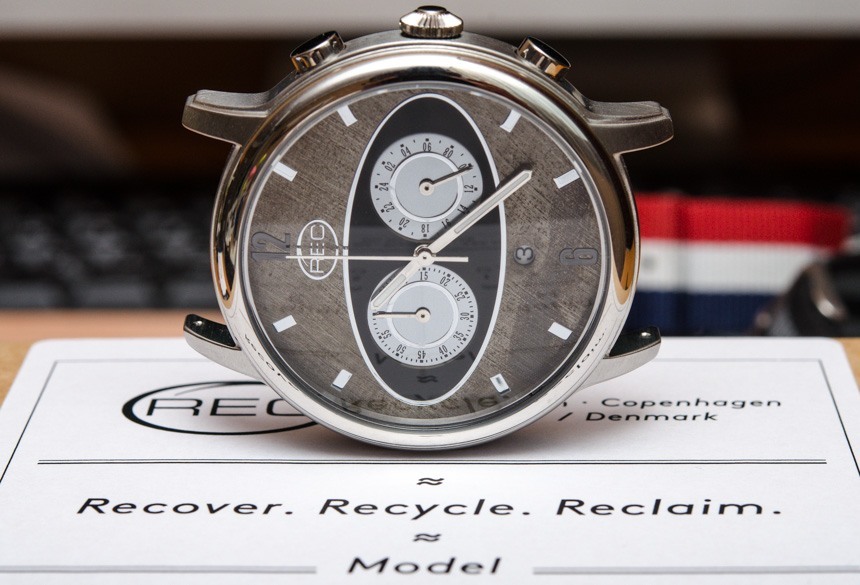 Recover, recycle, reclaim. This is the motto and also the base concept of the fresh Danish brand called REC Watches. Established in 2013, the goal of the company’s young founders was to create a watch brand that would incorporate recycled (or rather, upcycled) materials in the construction of their pieces. The piece we have in for review is called the Mark I chronograph, one of their first two lines of watches, and what makes them unique is that the dials have been cut from sheets of metal recovered from a 1978 Mini Cooper! As a result, no two watches are exactly alike, and while the REC Watches Mark I would be a lovely watch all by itself, it also tries to be more unique than other offerings in this entry-level price segment. 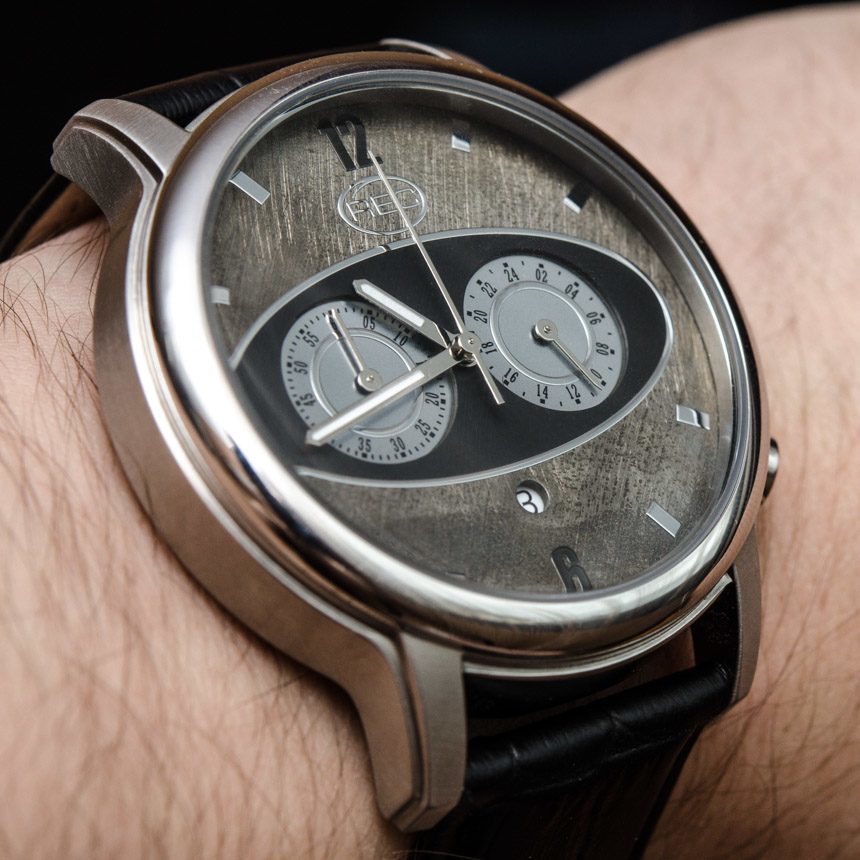 We have seen a handful of brands incorporate historical material in their watches before, with Bremont’s HMS Victory (using wood and metal from an 18th century ship) and Romain Jerome’s Moon Dust DNA (where the dial contains “dust” from rocks originating from the Moon) springing to mind first. The primary difference between REC Watches and the others is the more-than-considerable price difference, as the REC Watches Mark I costs around 2.5% that of those just mentioned. That is a significant difference and yet the overall experience remains comparable: when wearing any one of these pieces you are not just wearing a watch, but in one way or another you are also looking at an item that inherently has a story and some interesting history to it. 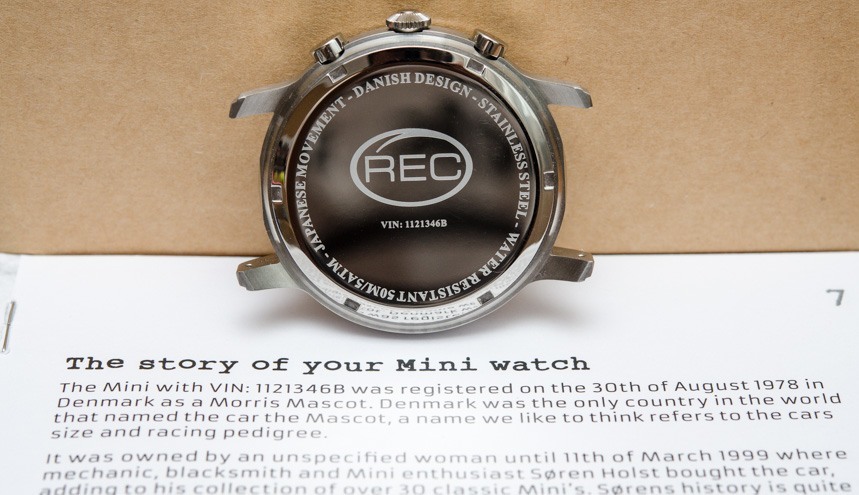 Below the Rec logo is the Vehicle Identification Number, marking the car that was upcycled to create the dial of the watch

Sporting a Japanese Miyota OS21 quartz movement with date, 24-hour display and 60-minute chronograph functions, you know the REC Watches Mark I will not be at the center of attention for its exposed and elaborately crafted mechanical movement or the reassuring action of its chronograph pushers – but again, you are not paying the price of those luxuries either. It is about something less “watch-nerdy,” something that I experienced to be more widely popular and interesting: the story it has to tell. On the back of each watch is the large “REC” logo and below it a peculiar line that says “VIN: 1121346B.” That is not your usual reference number and there is good reason for that: on the case back of every REC Mark I (or Cooper, which is the time-only model in their collection) is this so called Vehicle Identification Number, unique to the car from which the dials have been claimed. 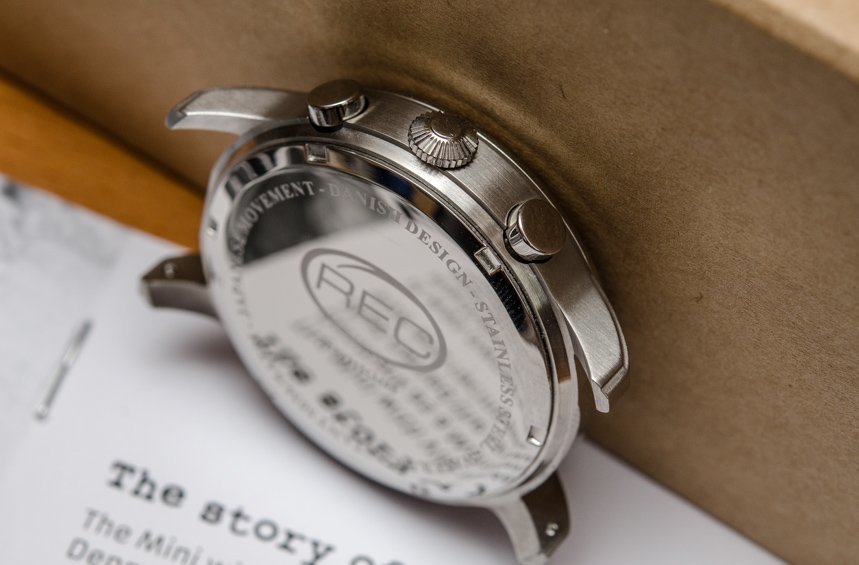 It is a scarce occasion to have a watch on the wrist which highlights something iconic in such a tangible form. You see, the dial in my watch comes from a 36 years old Mini that a lady used to own for nearly three decades, and while that for some that is not comparable to having particles from the Moon or pieces from an important ship in your watch, for others there is something amusing in being able to look at (and wear!) an item that has a unique history all to itself – a history we all can relate to. Furthermore, there is something to it being exposed in such a clearly visible way, meaning that the most interesting feature of this watch is not hidden “in there somewhere,” but is always visible through the large mineral glass front. 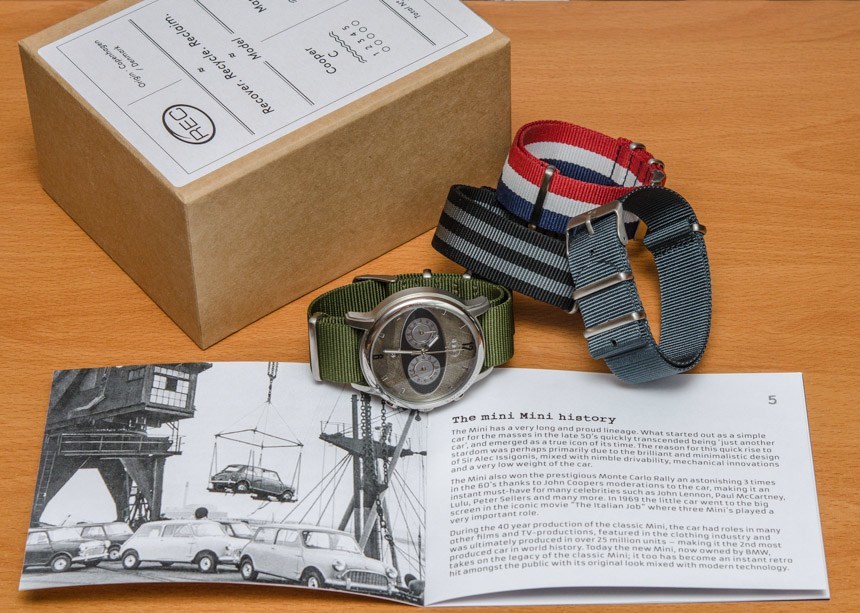 The video above shows the recovery process and how the REC founders recovered, purchased, and cut apart the Mini used for the Mark I. The watch comes with a little booklet that briefly discusses not only the history of the iconic Mini, but also that of the particular car part which has been used as the dial of the timepiece. It is a lovely feat, as it not only helps bring the owner closer to the watch he or she purchased, but also because it further strengthens the “talking piece” nature of the REC Watches Mark I. So is this feature aimed at the most hardcore watch enthusiast? Perhaps not, but I feel it has every chance to appeal to a broader customer base who will likely find it a cool detail; that little extra which separates the Mark I from the boring and endless array of fashion watches. 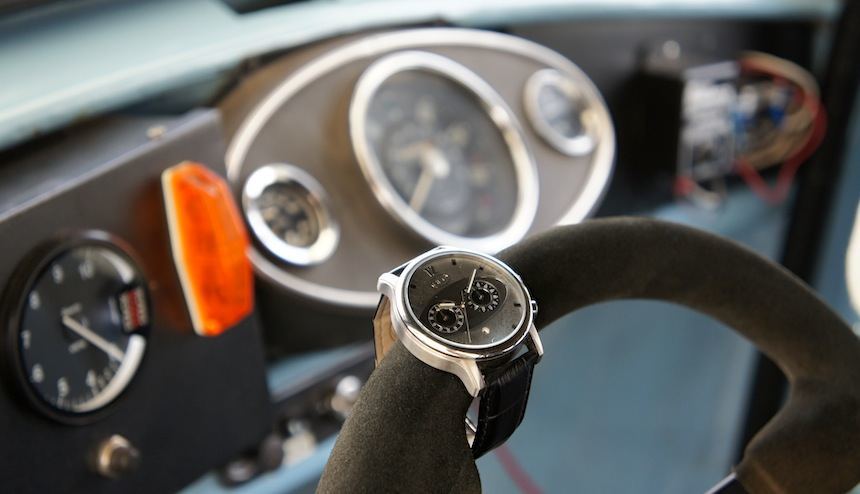 A prototype piece sitting on the steering wheel of a race-spec Mini Cooper, giving away the similarities between the dial-layout and the car’s dashboard. Credit: recwatches.com

The REC Watches Mark I collection comprises five models, differentiated by the colors of the subdials and the finishing of the case, which can be either stainless steel or ion plated black steel. Speaking of the case, although it is relatively large at 44.3 millimeter in diameter, it wears smaller than that figure would make one assume – it actually manages to look good even on my small, 6.75″ wrist. The piece reviewed here is called the Mark I M2 Chronograph, and it sports a stainless steel case with a brushed middle section, highly polished bezel, and grayish blue subdials. We have already noted that since the metal components of the Mini used for the dials are from different parts of the car, the texture of the dials are never exactly the same. 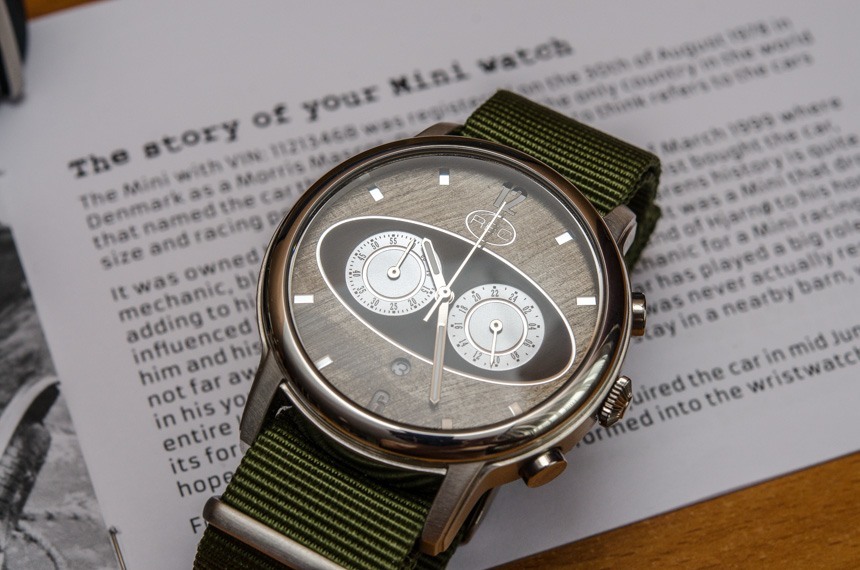