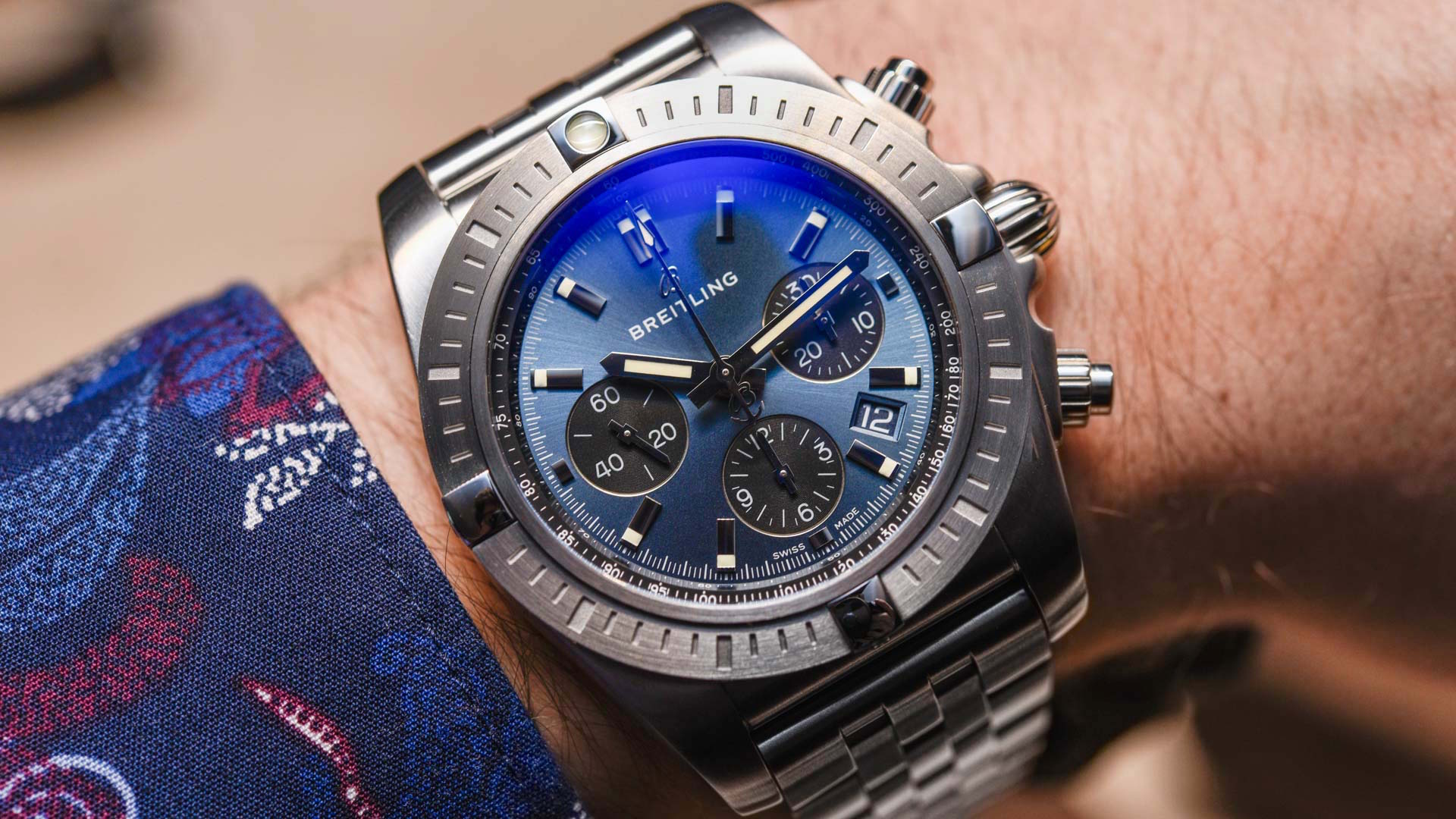 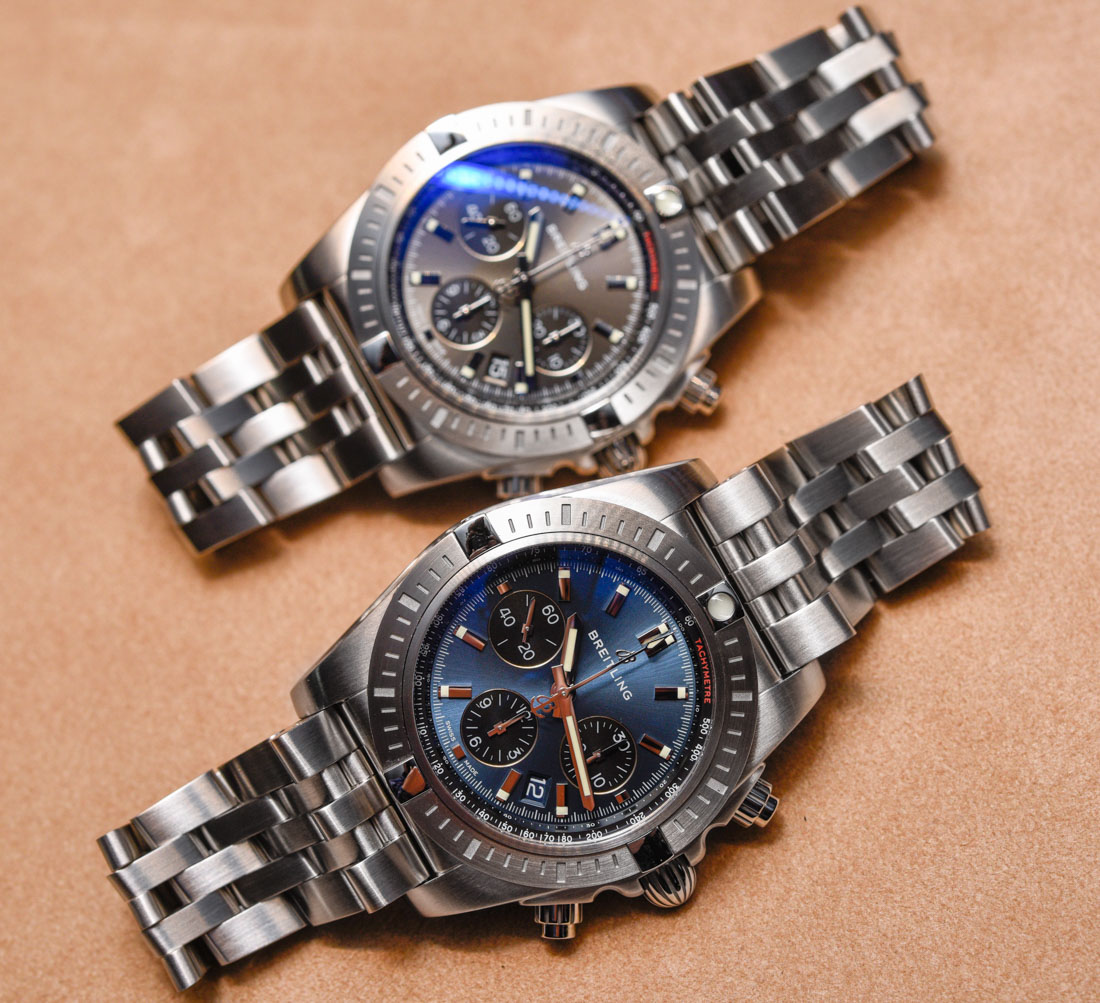 Breitling has been anything but under the radar the last couple of months. With Georges Kern at the helm, we’ve seen almost endless releases of new Navitimers (to mixed reviews and polarizing opinions, even among our team) but Breitling surprised us with the new Breitling Chronomat B01 Chronograph 44 at Baselworld this year. Modestly redesigned with a contemporary vibe in mind, the updated Chronomat is a welcome addition to Breitling’s modern catalog. Featuring their coveted B01 movement, a satin-brushed case, and reserved dial design, the Chronomat 44 takes an already rugged design and adds a bit more comprehension to it. We had a chance to try the modest (for Breitling anyway) new model and are here to give you our initial thoughts. 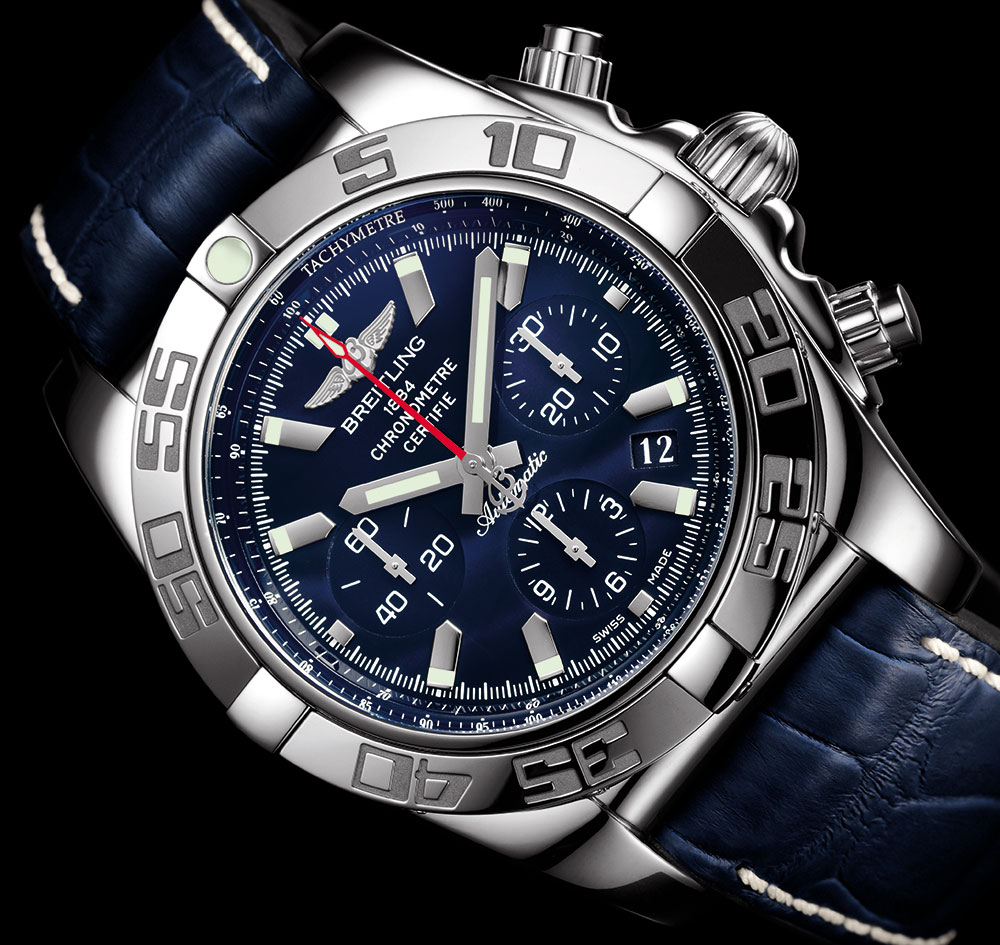 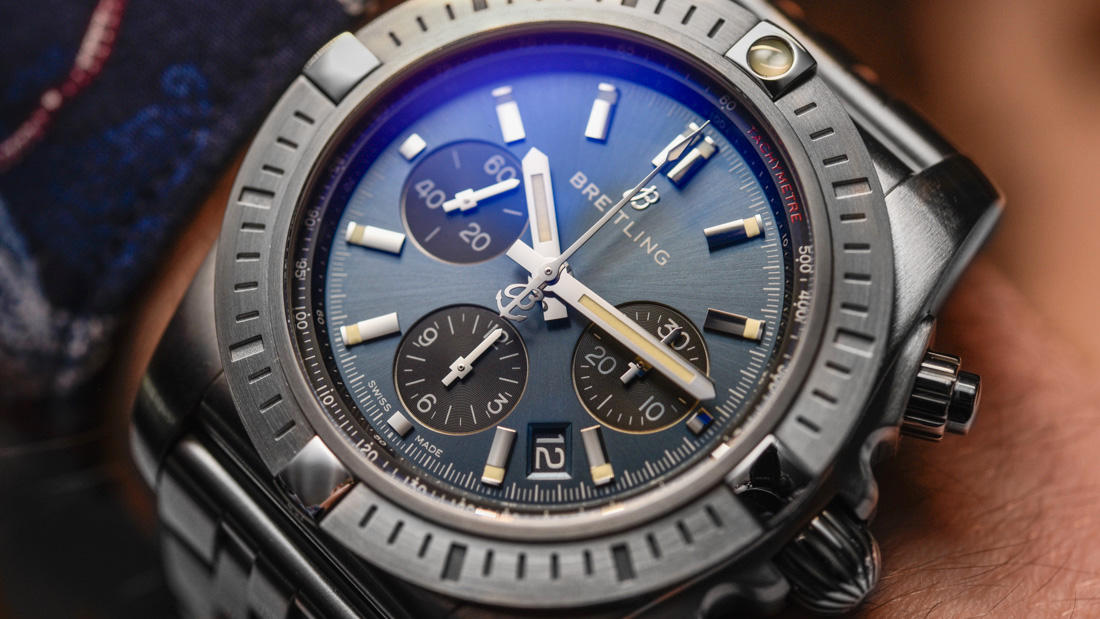 It’s been a little while since we’ve seen a significant update to the Chronomat or Avenger collections. Breitling took an aggressive approach to revamping the Superocean line with a dizzying slew of new models, followed this year by the controversial Navitimer collections. They peppered in a few updates (mainly the Chronomat 44 Boutique Edition and Super Avenger 01 Boutique Edition) accompanied by their heavy handed promotion of the new-ish B01 movement. But the boutique models have been largely unattainable and the collections have remained untouched for the last four or five years. 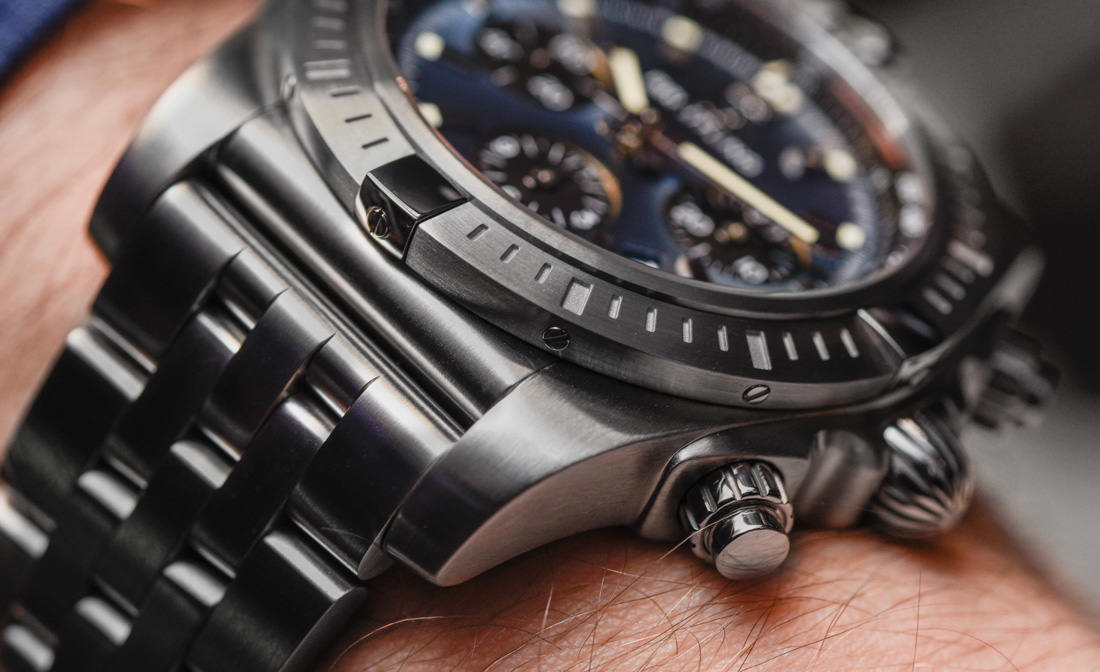 The reason I bring up both collections is because the new Chronomat 44 feels (to me anyway) like a fusion of the two. Let’s start with the case. The brushed stainless steel case measures in at an obvious 44mm with a relatively thick 16.95mm measurement off the wrist. Although, as is often the case with Breitling, it does feel a little bigger. The choice to go with the brushed case instead of the often standard polish found on almost all Chronomats, in my opinion, was a step in the right direction. The Chronomats have often looked ostentatious with the large numbered bezel and a high degree of polish, and the subdued Chronomat 44 doesn’t feel like a piece of jewelry, it feels like a tool – I’m actually reminded of the Chrono Avenger from Blood Diamond when I look at it. 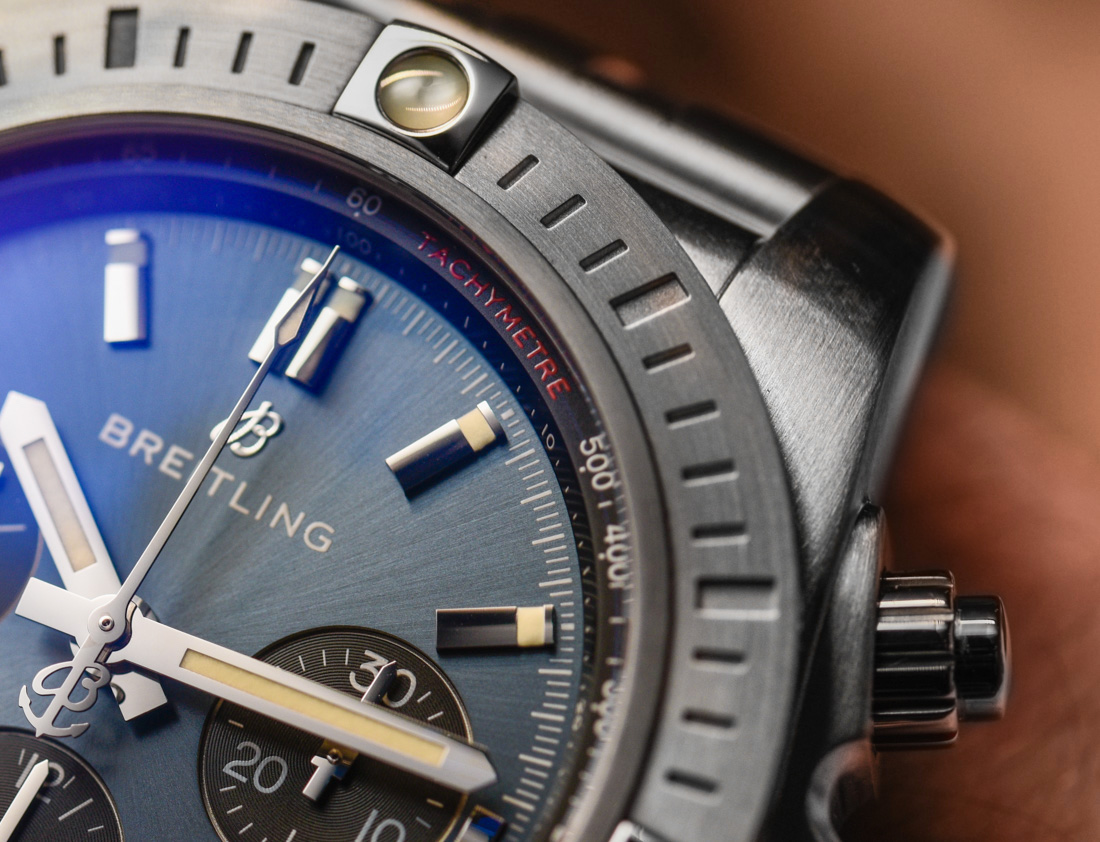 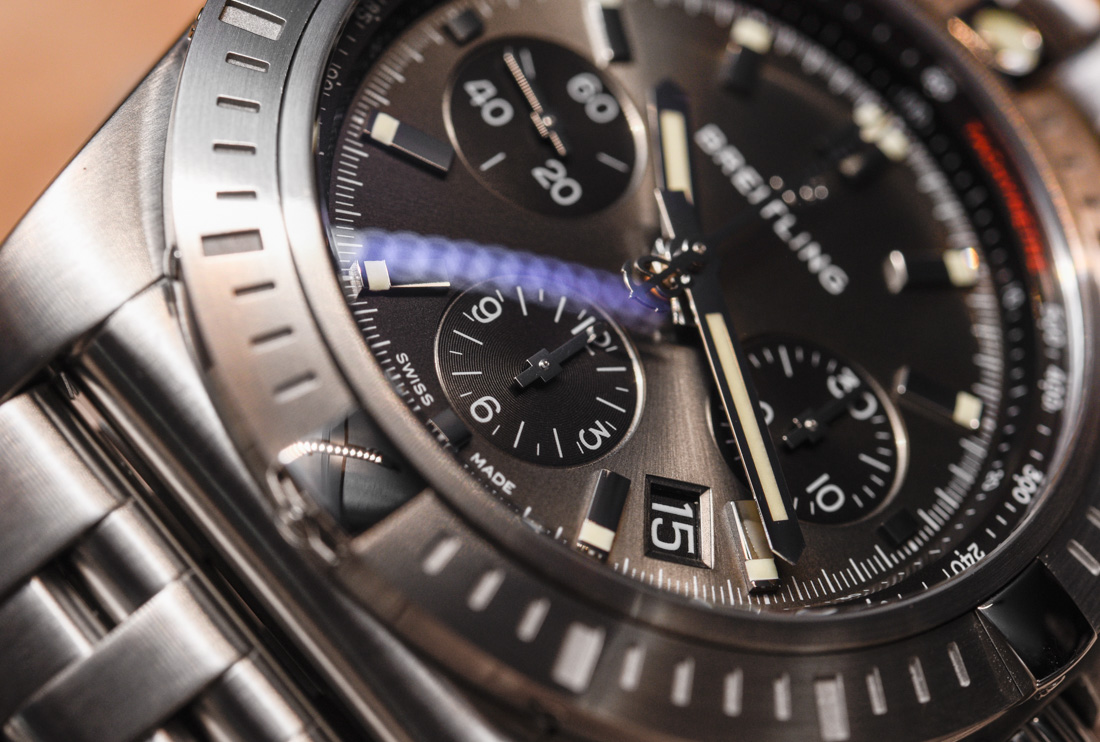 A further step from the previously released Chronomats is that in lieu of the oversized and thick 60-minute counter bezel, the Chronomat 44 utilizes a more reserved brushed steel bezel that’s not only slightly thinner but also modest. There aren’t huge military-style numbers at each 15-minute indicator, and the matte finish to the etched indicators looks great. The screw-down crown utilizes the updated bullet shape that isn’t as difficult to pull and adjust as I originally thought from press images of the Chronomat 44 Boutique Edition. 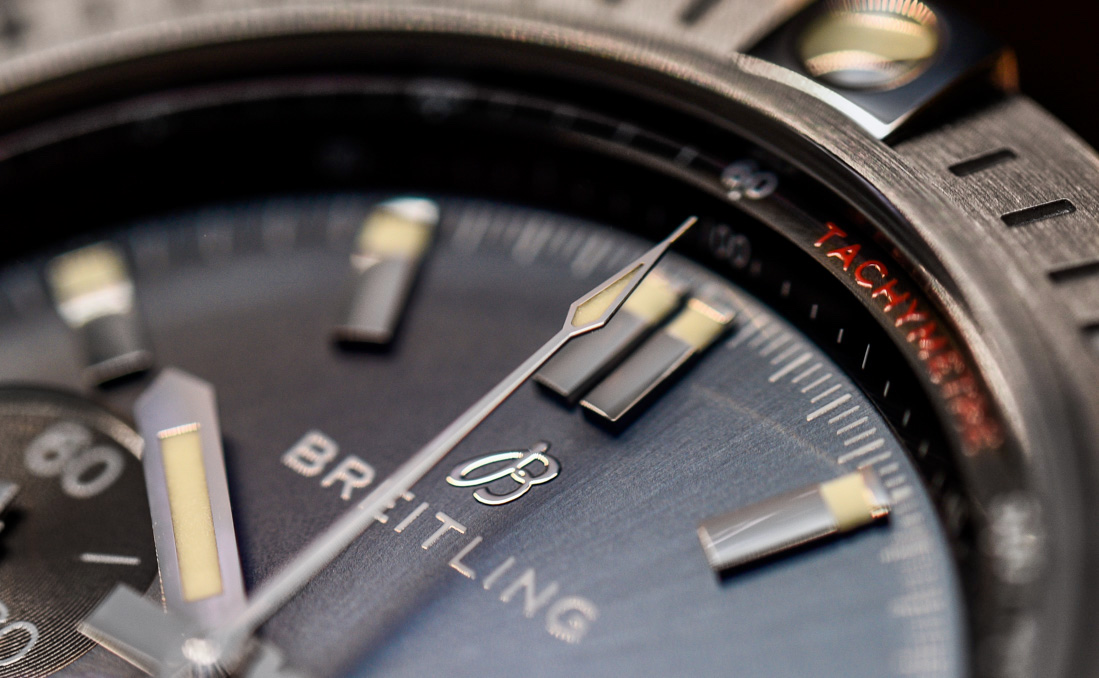 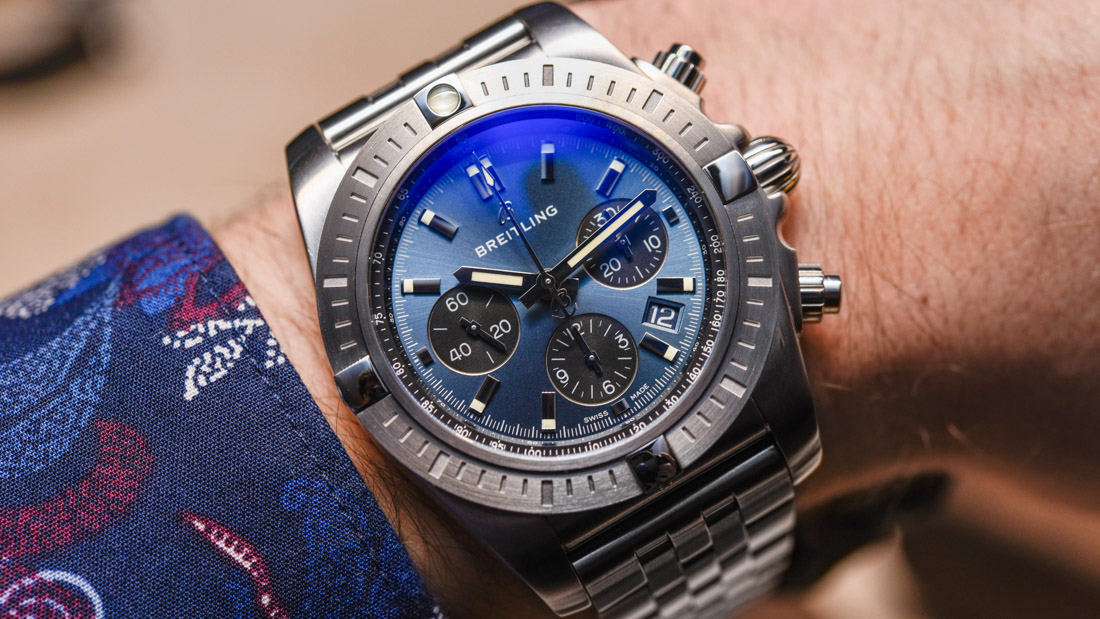 The dial has also gotten a modest refresh and looks great through the double-coated AR sapphire crystal. Breitling, instead of going the Navitimer or Superocean route, has only opted for two color options for the Chronomat 44 (though, I’m sure we will be seeing more in the future) and that makes the watch easier to digest. The dial comes in either a “Blackeye Grey” or “Blackeye Blue” colors. Personally, the blue is my favorite of the two and I appreciate the cleanliness of the dial. There isn’t any ridiculous texture or invasive designs, the chronograph registers aren’t gigantic, and the date window matches the dial and doesn’t stand out like light shining through a window in the middle of the night (something that drives me nuts about so many Breitling models; dark dial, plain white date wheel). 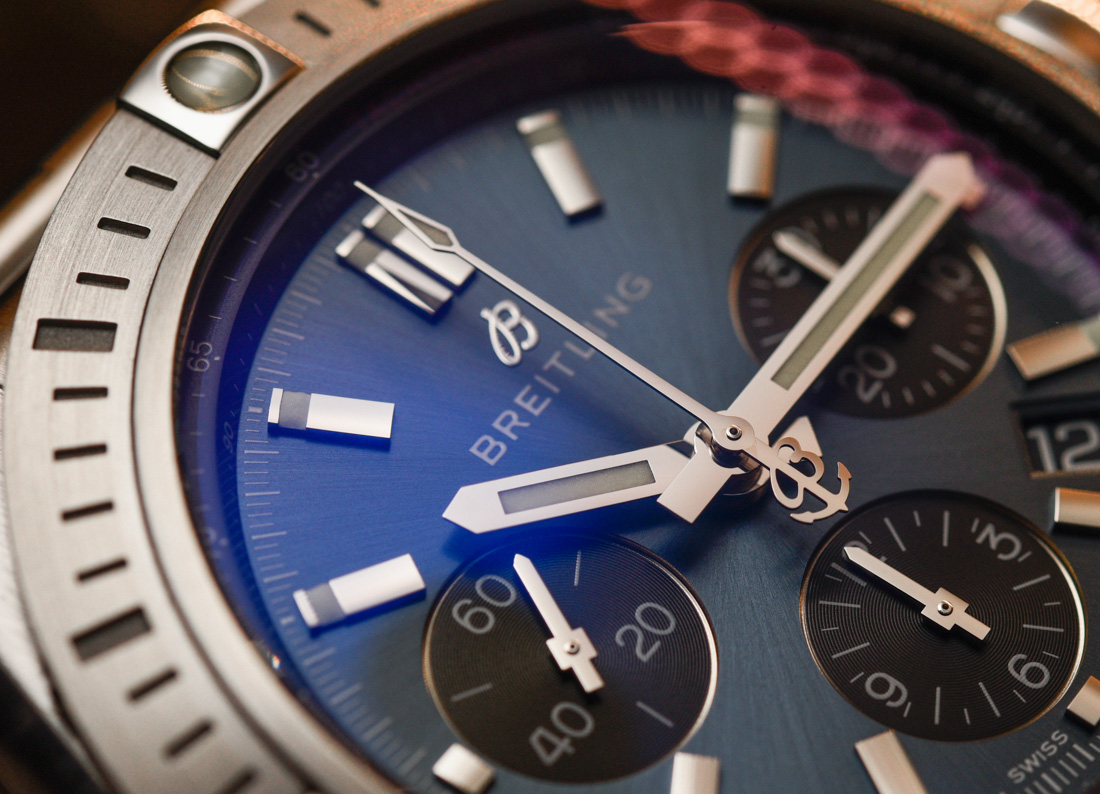 The new “B” logo has been stirring up some controversy, but it looks great here. The exclusion of the wings doesn’t bother me. The width of the logo often led to it dominating a dial or being awkwardly located – like at 3 o’ clock. The concentration of text instead of having some up top, some in the middle, and some on the bottom of the dial gives the watch some uniformity and flow that is often missing across Breitling’s collections. 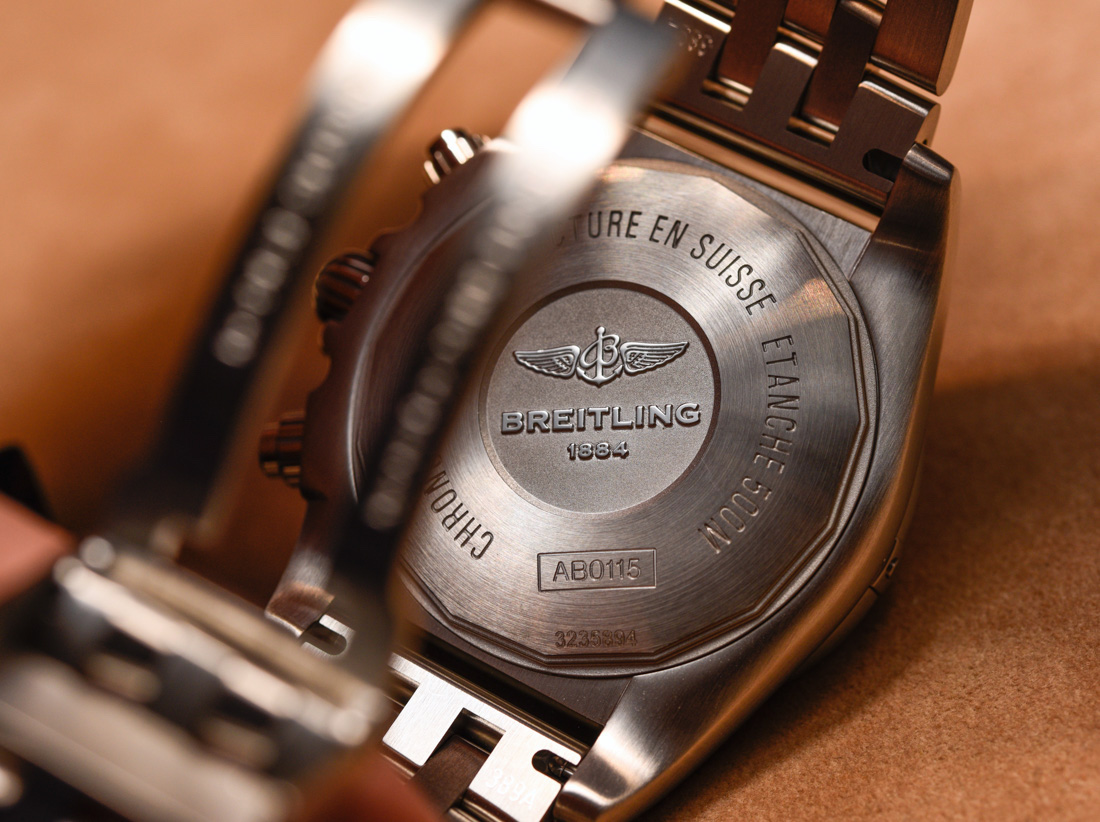 No doubt that the main attraction here is the inclusion of the B01 movement. Shared with Tudor, the movement has sparked a lot of discussion since its release but has nonetheless been a staple requirement for a lot of collectors. The strategy has largely been to release a model or two with the B01, rather than a bunch of models without it. The B01 Caliber beats at 4Hz and carries a whopping 70-hour power reserve. 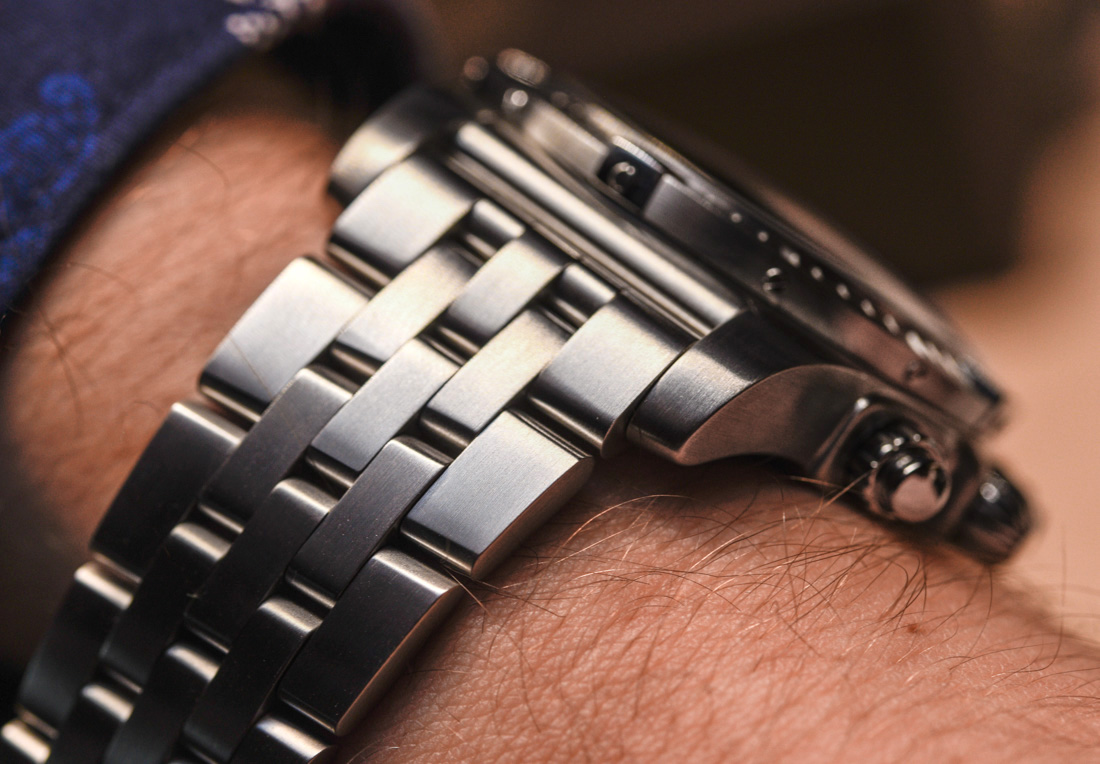 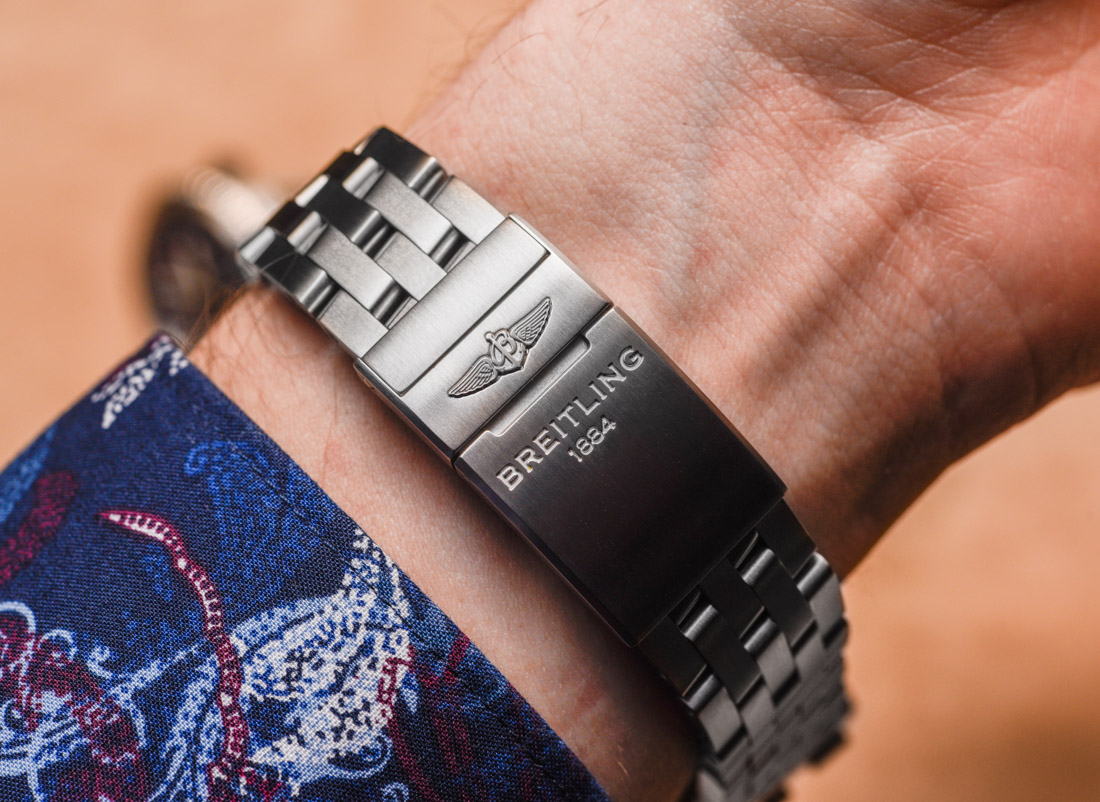 And on to my favorite part of the watch, the bracelet. Often the case with oversized and heavy cases, the bracelet isn’t as snug as it needs to be, and the watch can slide off to one side or the other when moving, but not with the Chronomat 44. I’ve often found Breitling’s bracelets superbly comfortable and attractive, though not all of them. The angular 5 link style is absolutely heavy, but it’s Breitling, and that’s par for the course. The brushed steel bracelet sits great on the wrist, isn’t obnoxiously thick, and gives the watch a proper tool vibe. The folding clasp allows for some micro-adjustments and isn’t much thicker than the bracelet (a qualm I’ve had with some of Breitling’s previous bracelets) making the watch one of the more comfortable fits despite the large size and weight. 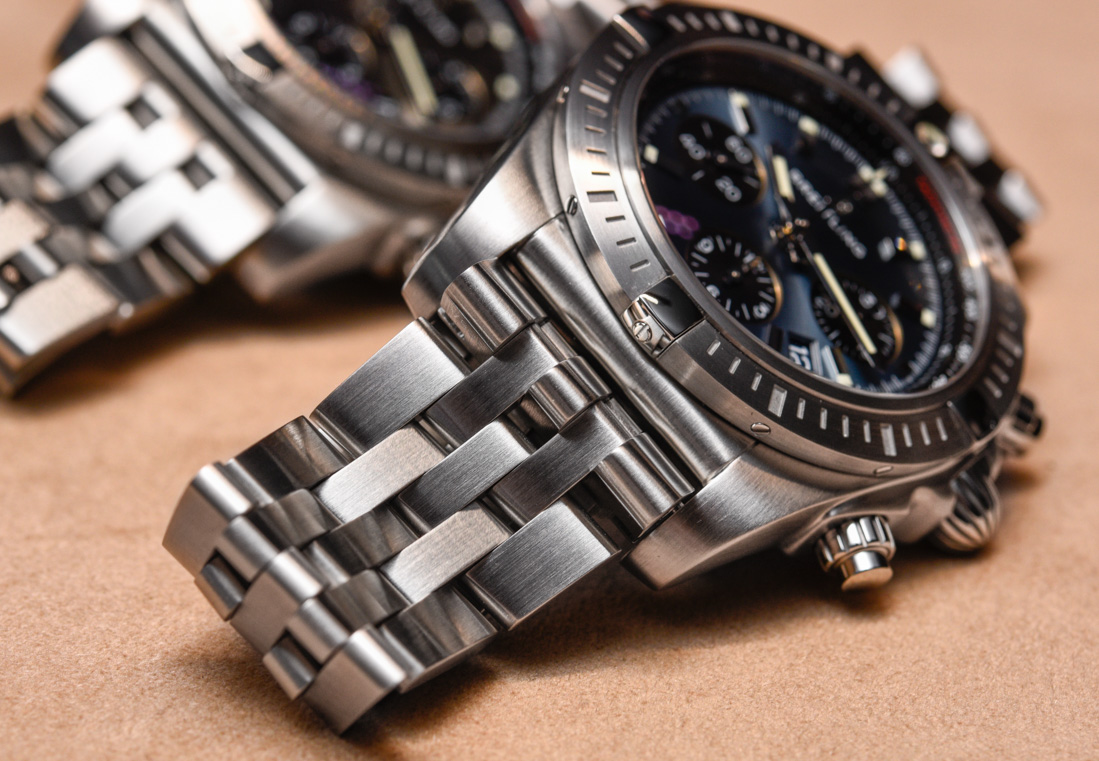 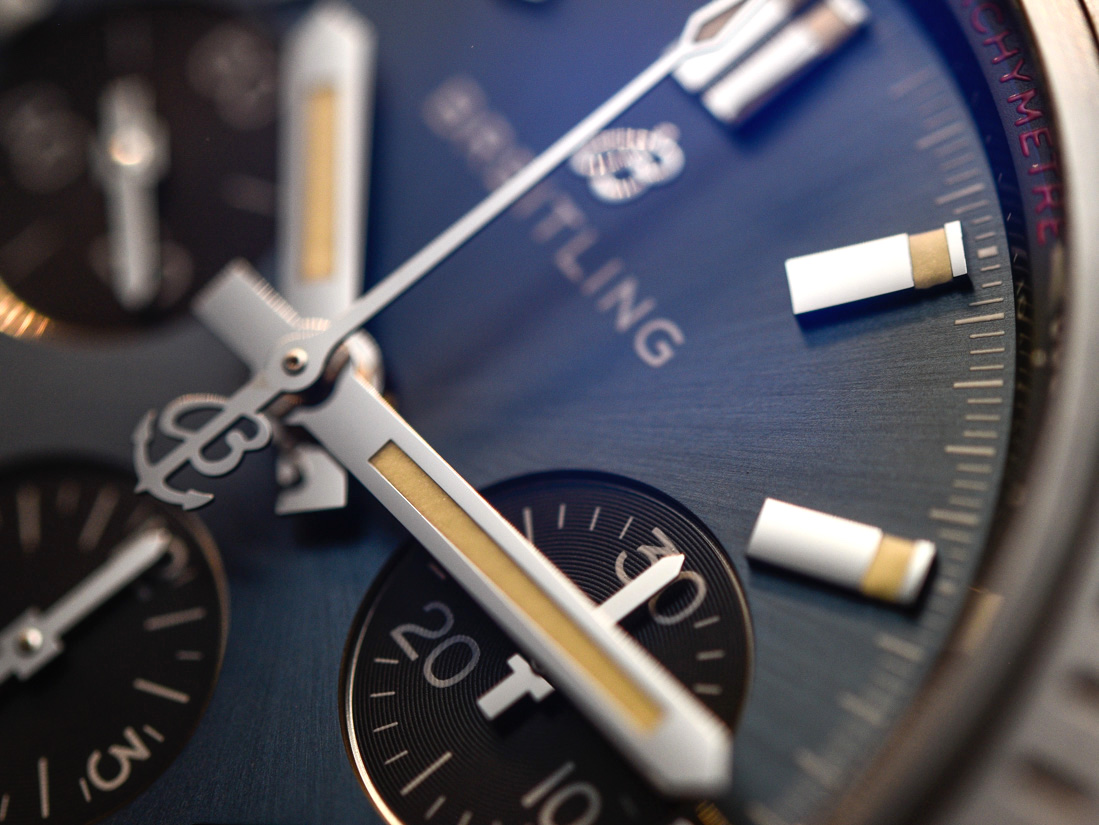 Overall, this was a solid release from Breitling. The Breitling B01 Chronomat 44 Chronograph was something I wasn’t expecting this year but it was a welcome surprise. When paired with the newly updated and revamped Navitimer 1 collection, I have been able to rest easy with Kern at the helm – because we had a rocky start at first. All of the modern refreshes out of Baselworld 2018 have seemed to tighten up models and collections that were either long left untouched, or started to drift off the rails. In the case of the Chronomat 44, going back to its modern tool roots while presenting a modern timepiece wasn’t going to be an easy feat, but I find it to be successful. The Chronomat was never really a watch I would have considered, but I can’t say that now.

At the time of writing, both the “Blackeye Blue” and “Blackeye Grey” models carry a price tag of $8,720. There is still no official release date, but we suspect that those details may be announced very soon. breitling.com