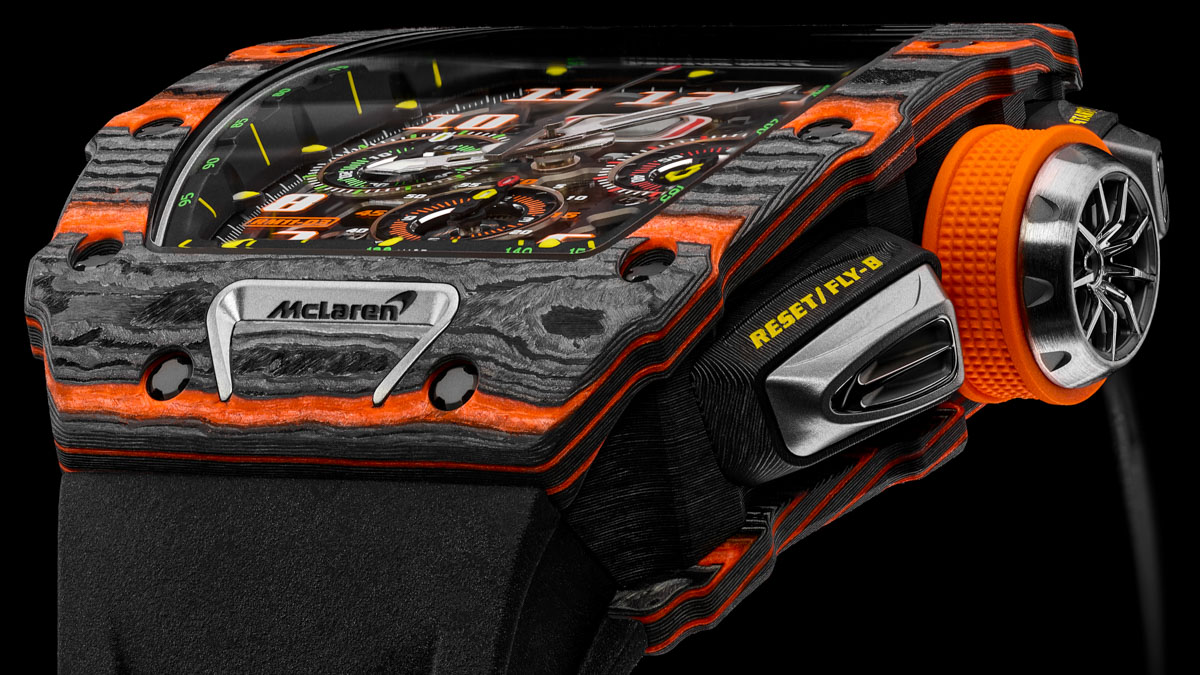 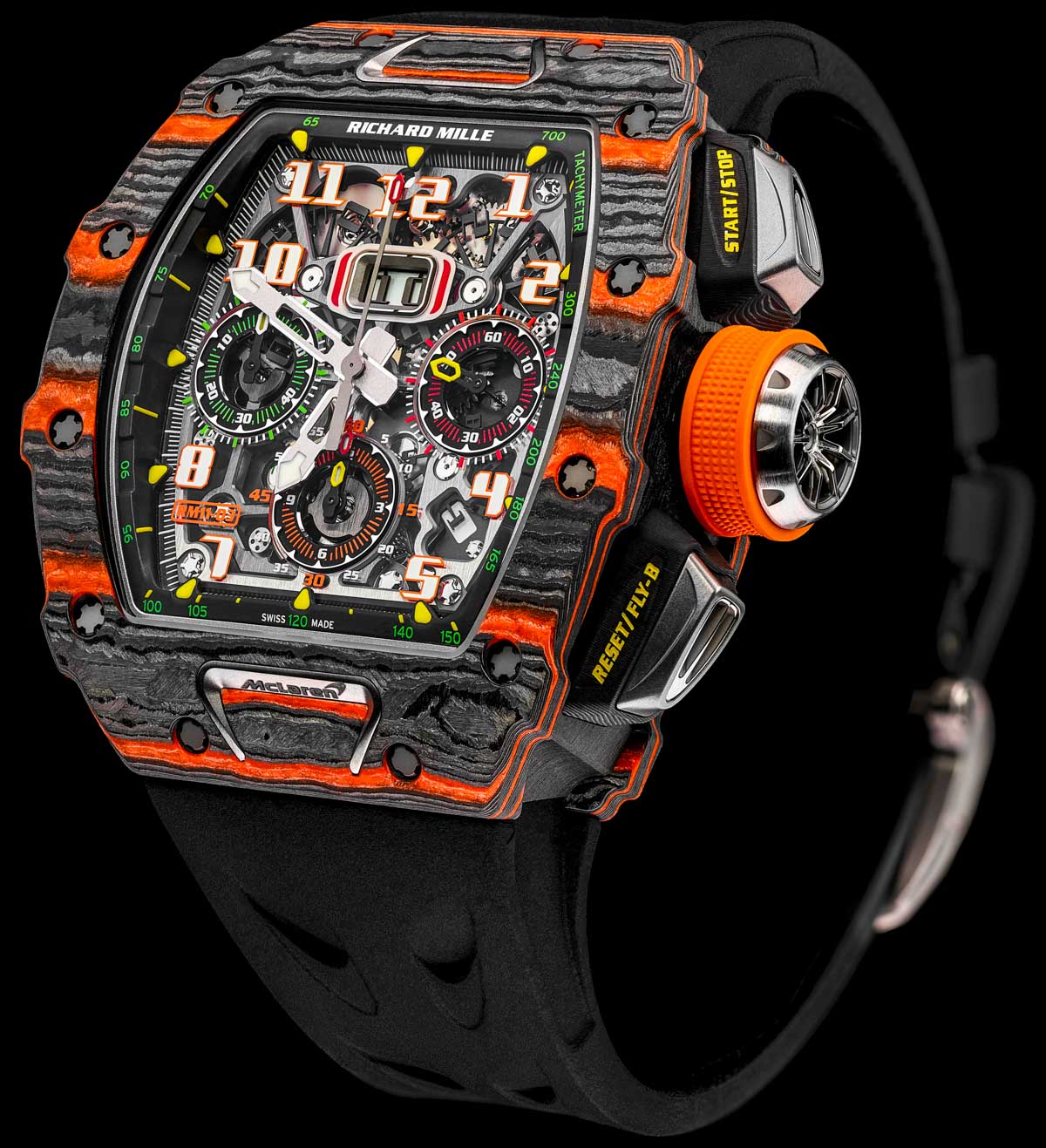 Behold, the Richard Mille RM 11-03 McLaren Automatic Flyback Chronograph marks the debut of yet another over the top watch from the purveyor of over the top watches. I have been covering Richard Mille – and other, similarly unorthodox watches – for so long, that nowadays sometimes my mind’s immediate reaction when looking at them is not awe, but rather a sort of sympathy to my fellow watch lovers who simply can’t enjoy these watches. Still, I can’t help but love these watches and if there was an MRI machine around, I’m sure it could show that the part of my brain that enjoys these, is the same that gets a kick out of colorful G-Shocks.

Since none of my, or Richard Mille’s (though, mind you, basically non-existent) efforts will ever suffice to change the minds of hardcore traditionalist watch lovers, why am I still talking about them? I ended up asking myself this very same question and came up with the answer that perhaps it’s this natural thing where if you enjoy something, you at times kind of want others to get what you like about it. Anyhow, enough talk about what this watch (and brand) isn’t, and let’s look at the bonkers new Richard Mille RM 11-03 McLaren Automatic Flyback Chronograph. 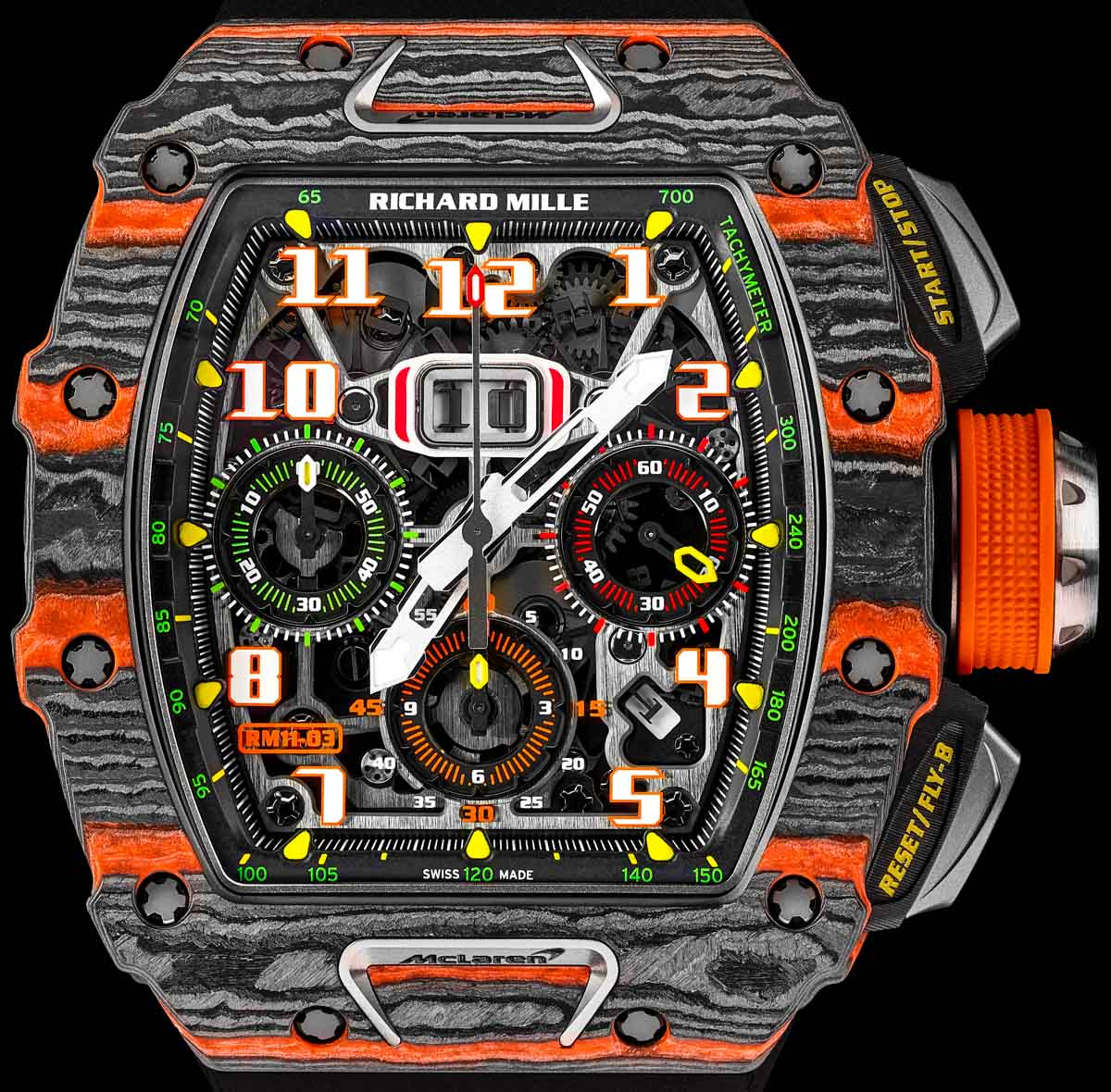 The RM011 has been around for ages, and in that time it has become the most instantly recognizable Richard Mille – it’s their Porsche 911, the only difference is that it costs more than most 911s. In all these years, the RM011 has seen many different variations, most notably the ones that have advanced in their details and have marked this evolution by taking on the brand’s naming scheme reserved for marking this progression. As such, the RM 11-03, although it’s been out for some time, is the most advanced 11-series Richard Mille thus far.

Before we talk looks, let’s get a glimpse under the hood: the RMAC3 caliber has a fly-back chronograph, a 60-minute countdown timer at 9 o’clock (that is actually a reversed 60-minute chronograph totalizer, but you won’t see that pointed out by anyone, really), a 12-hour totalizer, as well as an “oversize date” and month. The RM011 used to be an annual calendar, but there is no mention of that feature here – I guess it may still be in there somewhere. 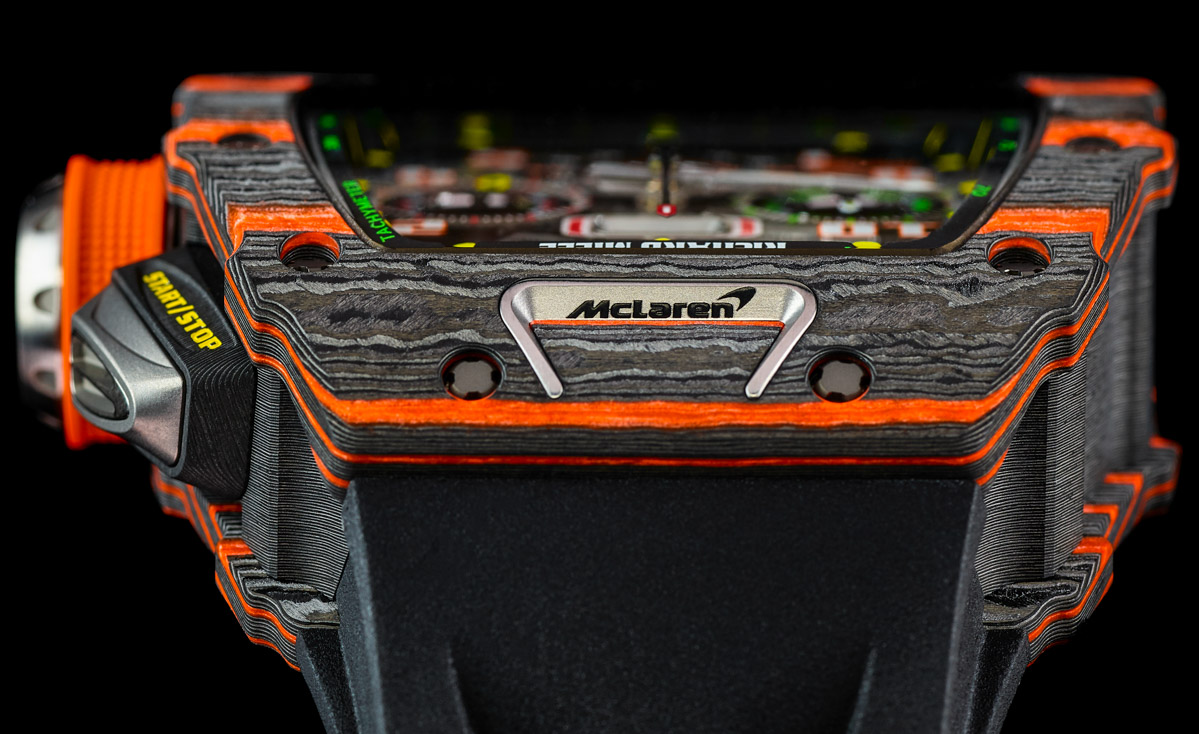 If anything, a rather hilarious aspect of Richard Mille that I will point out is how challenged they seem to deliver their own tech specs. I’ve yet to see a Richard Mille product page on their website or a press release that has all the basic info and that didn’t have some mixed-up elements that look like some unbelievably quirky details and some important specs were written on post-it notes, put into a blender, and whatever came out arranged into a PDF. On this occasion, the RMAC3 caliber’s basic functions are discussed and right under it, it says: “Dimensions: 49.94 x 44.50 x 16.23 mm.” I mean, us nerds, we know that’s for a case, but should anyone outside of our circles dare cover this watch they’d have no idea. 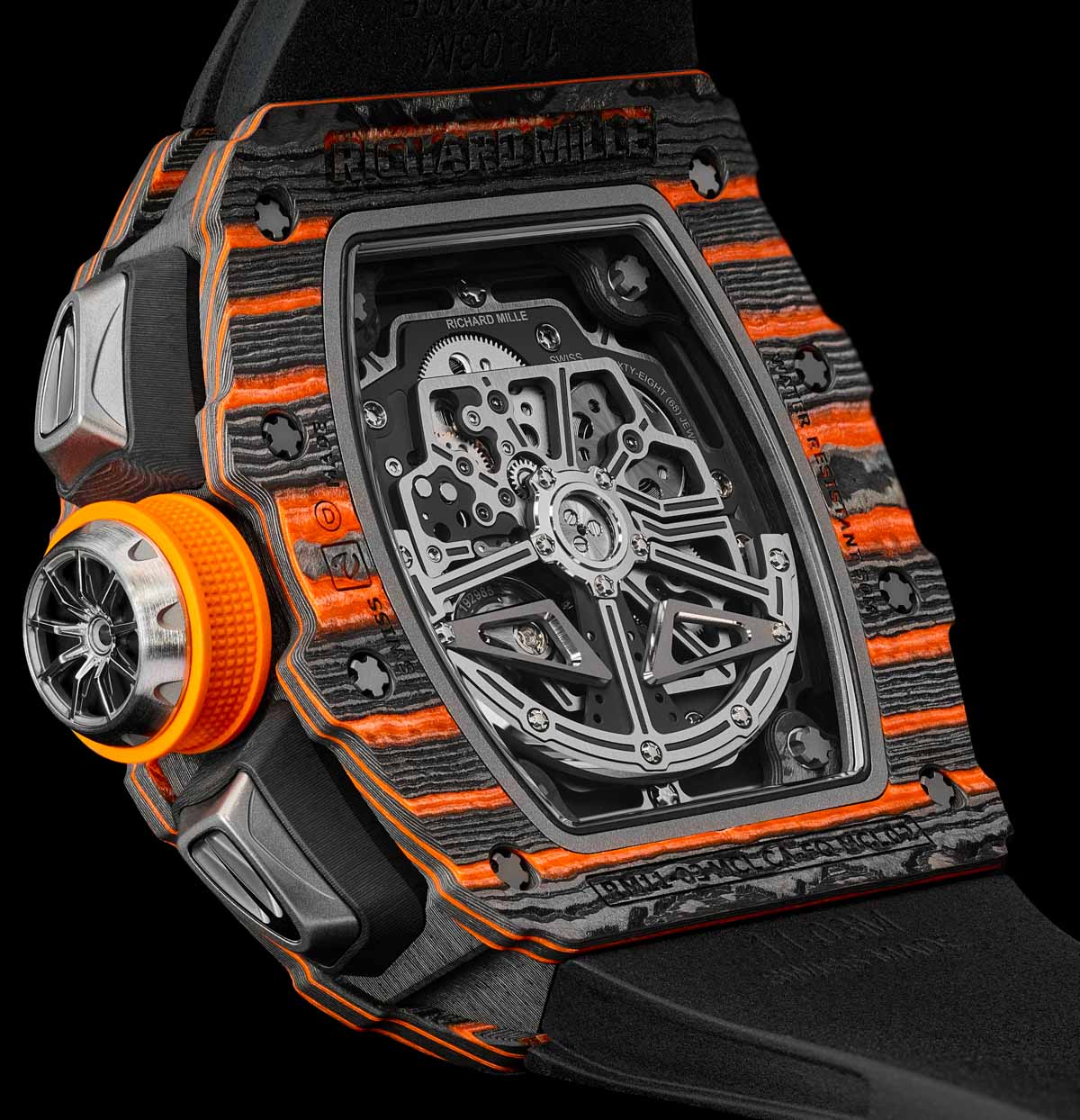 I still enjoy reading amusingly detailed stuff like “Balance: Glucydur®, 4 arms, moment of inertia 4.8 mg.cm2 angle of lift 53°” or “Shock protection: INCABLOC 908.22.211.100 (transparent)” or “Barrel arbour – in AP 20 steel.” Just totally random, entirely intimidating and largely unintelligible stuff that I am absolutely sure they fully understand has no effect whatsoever on the mind of someone buying this watch – perhaps other than that of “cool intimidation” in isolated cases – and if that’s not a marketing thing already, then, well, it has to be.

Anyhow, all my watches must strictly have a 52° angle of lift, not one bit more, so the RM 11-03 is, unfortunately, off my list now! 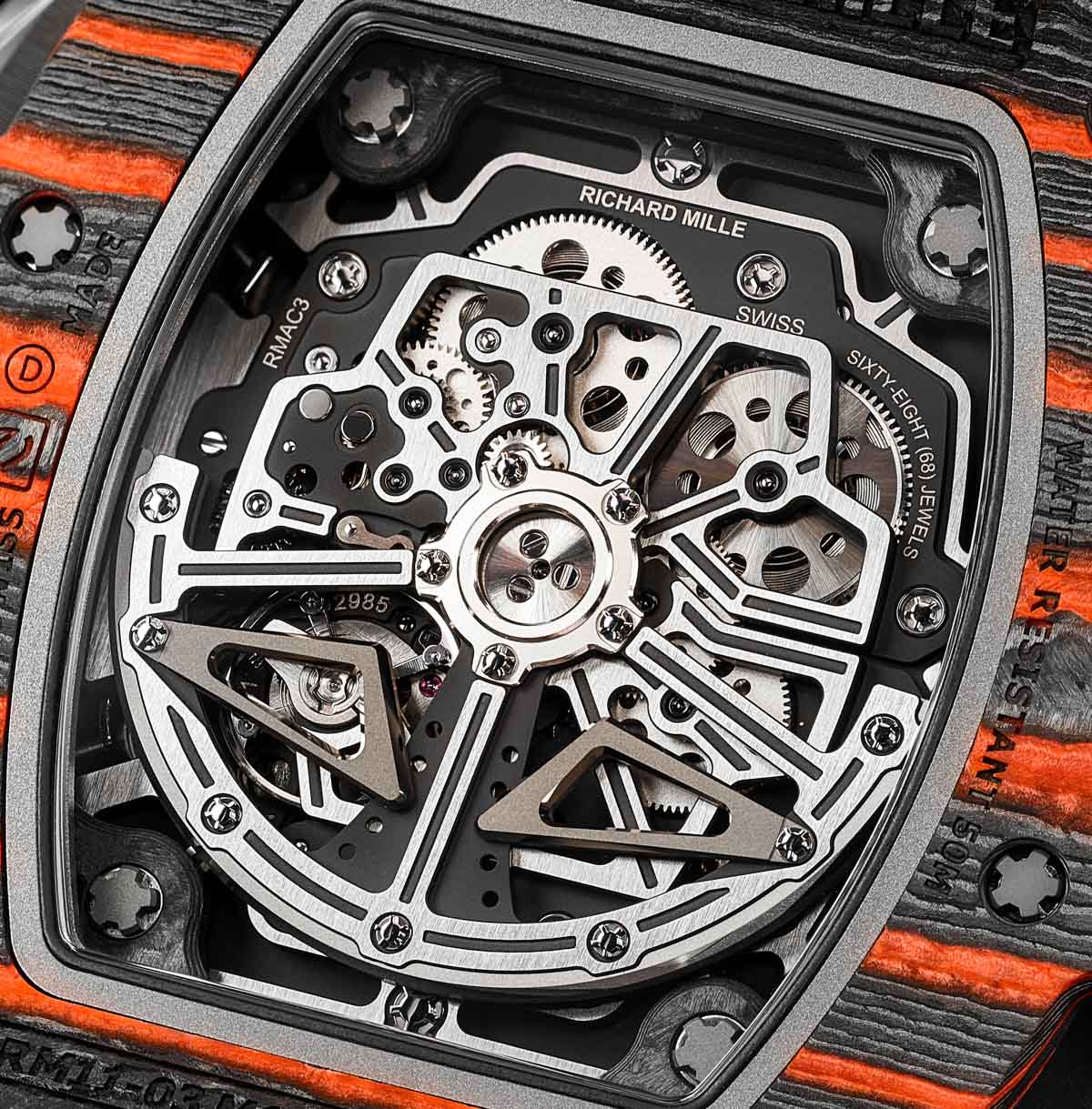 The baseplate and bridges are still made from grade 5 titanium, an impressive feat – achieved by Vaucher manufacture who, along with APR&P, supply Richard Mille with movements; although I’ve seen that some work is performed on the movements on Richard Mille’s premises, which by itself is impressive as even their most basic movements have some cool and rare quirks. The RMAC3 caliber’s bridges and plates are crafted from an alloy of 90% grade 5 titanium, 6% aluminum, and 4% vanadium. The end result is a watch that feels feather light on the wrist with an unusual, but neat weight balance, hence drastically improving wearability. 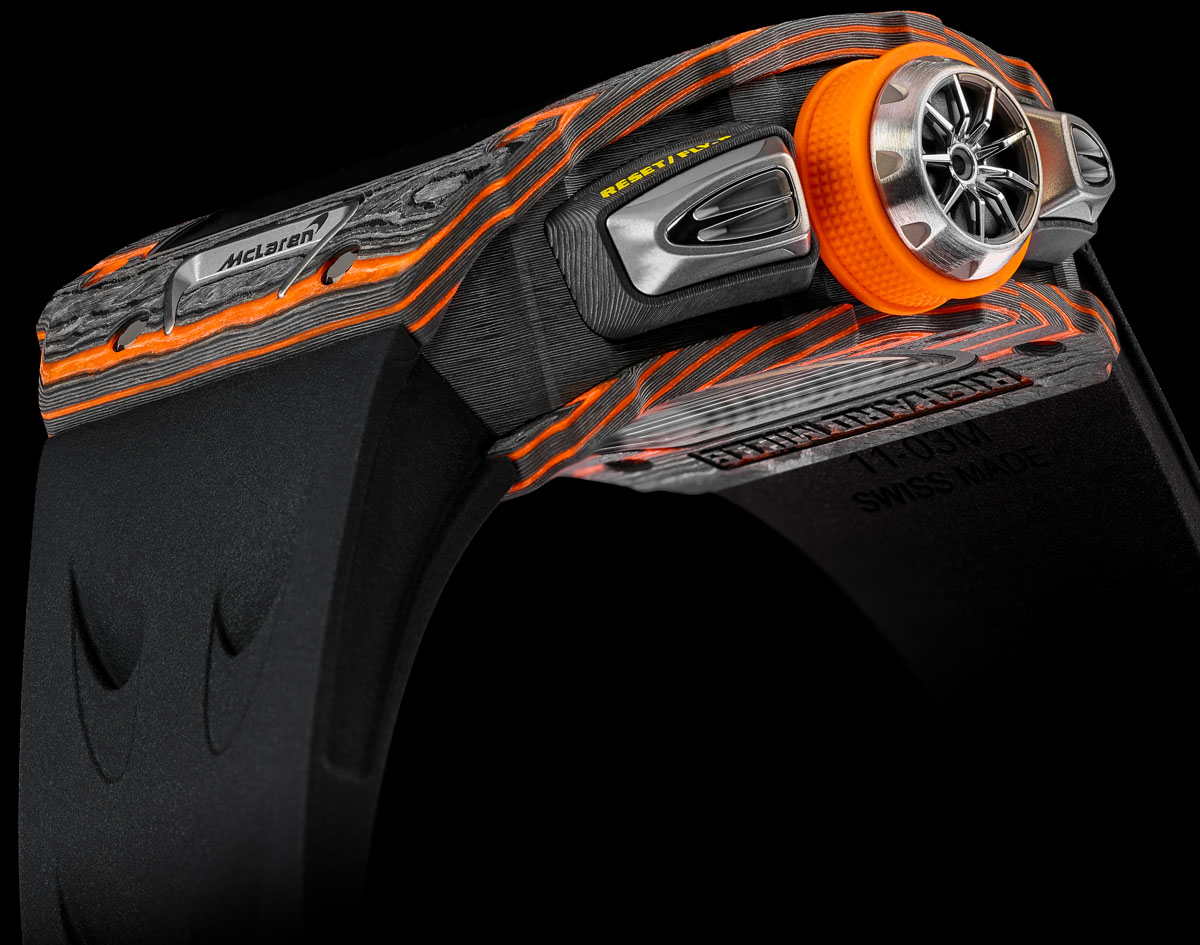 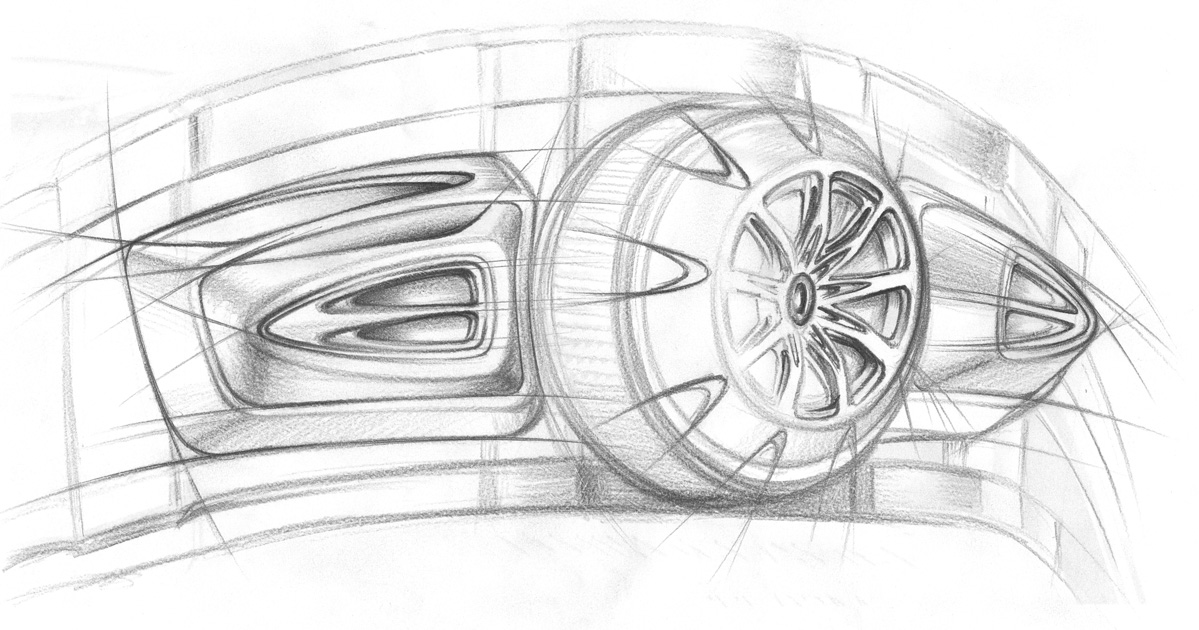 Speaking of which, I should add that yeah, the design may not be for everyone, and the pricing is decidedly not for almost anyone – but the eggheads at Richard Mille could definitely teach the larger industry a thing or two about wearability and comfort. The Richard Mille watches I’ve had the chance to wear – including some for an extended period of testing, like this RM033 here, or this RM011 here – were all among the most comfortable watches I’ve ever worn. Without going into a deeper discussion of the topic, I’ll also add that unless you’re spending your time among the top 1% of the top 1% (which I am not), in my experience nobody, and I do mean absolutely nobody out in the real world recognizes Richard Mille watches, so the massive show-off factor that some associate with a watch that comes at six-figure prices is entirely unsubstantiated. 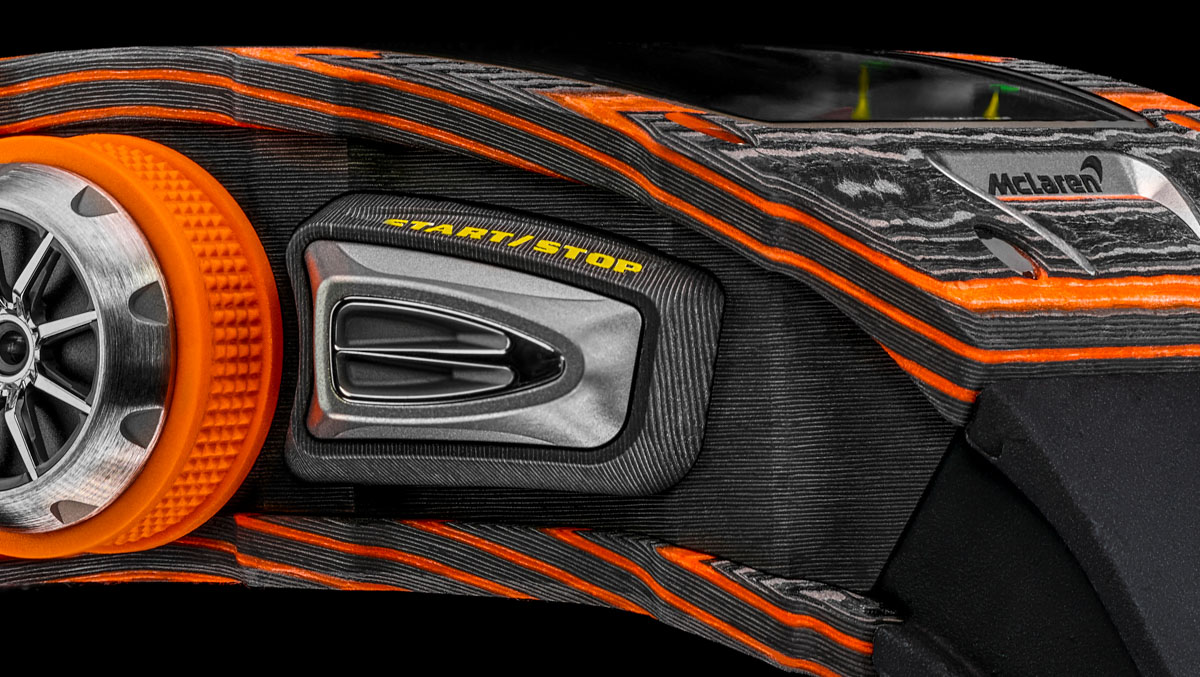 The case, whose dimensions we’ve familiarized ourselves with already, is a mix of Carbon TPT and Quartz TPT, two exclusive materials with, uhm, a matching appearance. The surface displays regular undulations, thanks to the countless, 45-micron-thin layers of parallel filaments, obtained by dividing carbon fiber or silica threads. These layers are impregnated with resin and then woven on a special machine that modifies the direction of the weft by 45° between layers. Then, Quartz TPT layers are saturated in an orange resin, developed specially for Richard Mille to, you guessed it, match the orange color of McLaren. Heated to 120°C at a pressure of 6 bars, these materials are then ready to be processed on a CNC machine in Richard Mille’s case factory. The case of the RM 11-03 is water-resistant to 50m, ensured by two Nitrile O-ring seals. The case is assembled with 20 spline screws in grade 5 titanium and abrasion-resistant washers in 316L stainless steel. 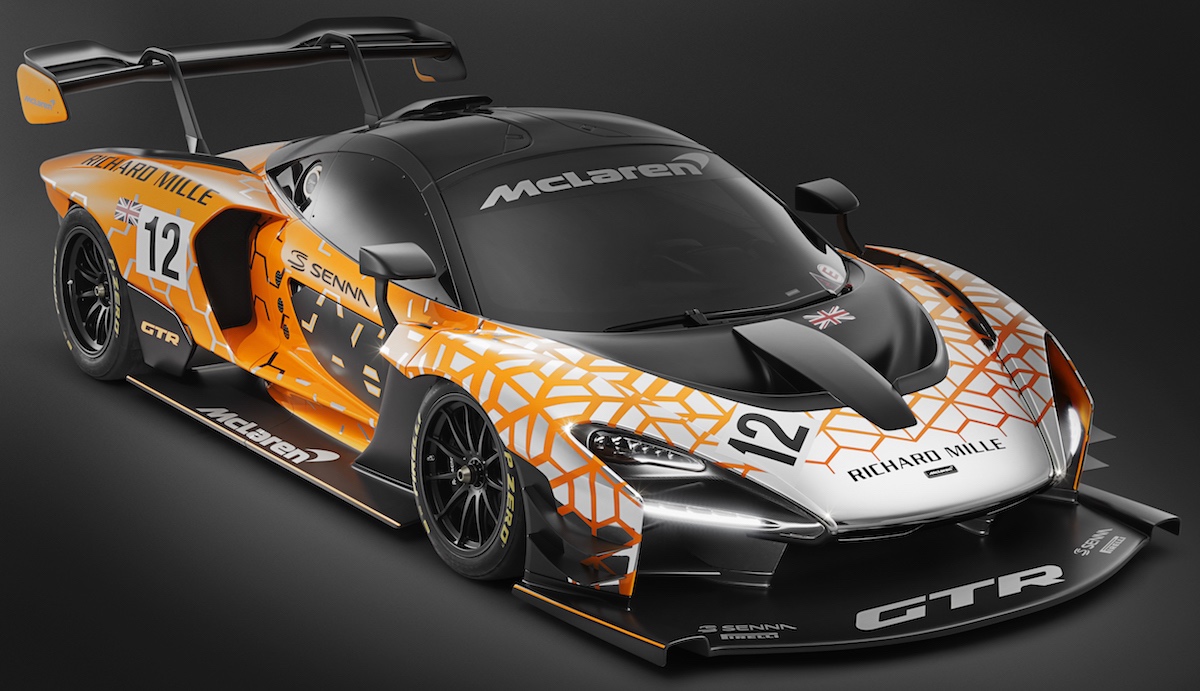 The end result is a case that’s an acquired taste. What Richard Mille gets right is that they, along with few other brands, understand that the people who buy one McLaren after the other, are constantly overwhelmed by the products they own – and I’m sorry, but the only reason they’d wear a flat, round, discreet, small, uncomplicated watch when they go for a drive, is because they’d enjoy the way it contrasts against all the tech in their cars. So, in this sense, this watch is a good match to McLaren, who’s been on a roll recently with the launch of the Senna and Senna GTR, the 720S and, a few years ago, the P1. 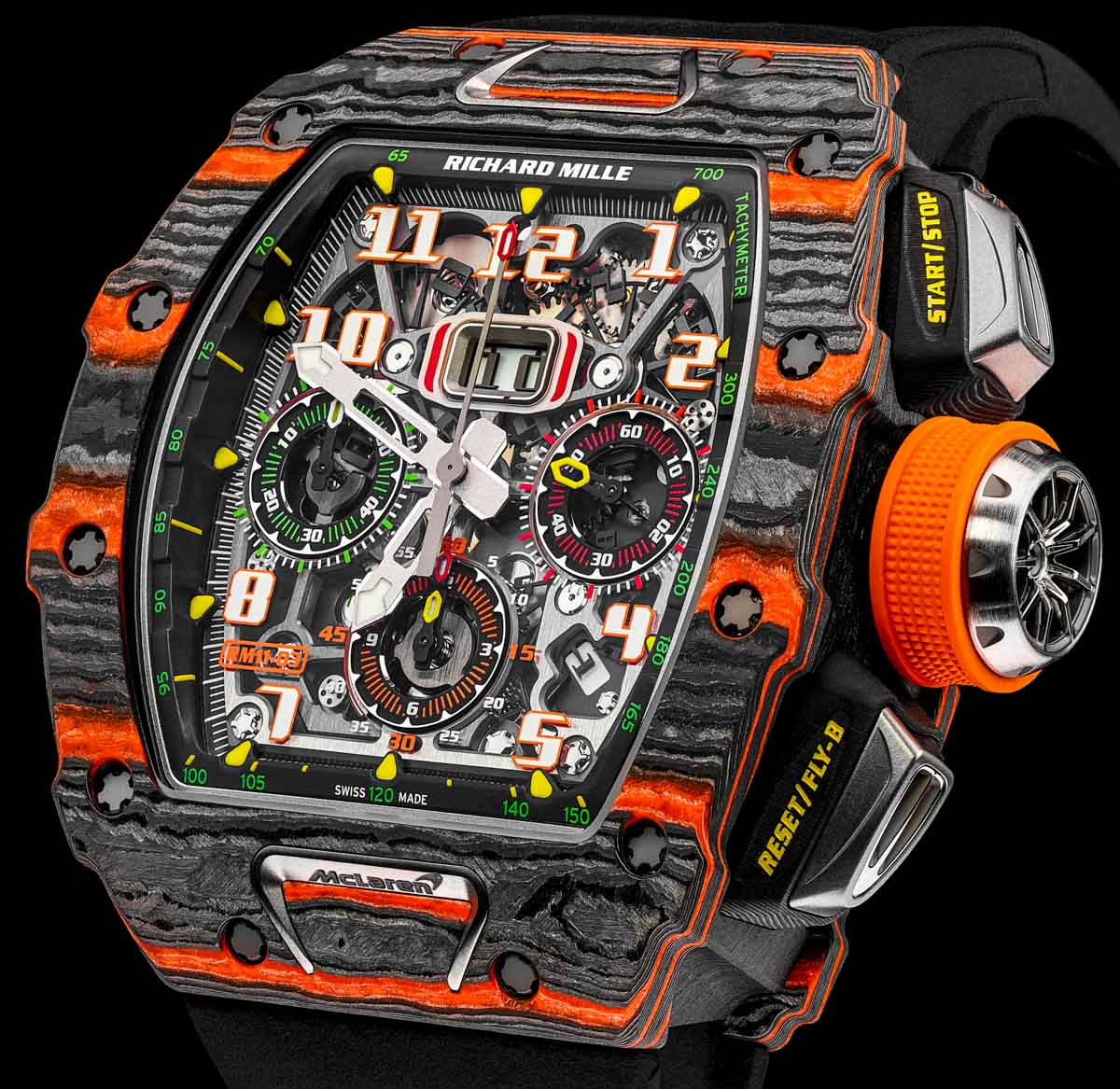 If I had all the money in the world, would I have and wear an RM011? You bet I would – had it complied with my strict angle of lift requirements, that is! Would it be this one with this much orange and yellow? Maybe not. Still, I imagine this latest RM 11-03 will do really well, as it’s an admirably good match to McLaren and its privileged clientèle.