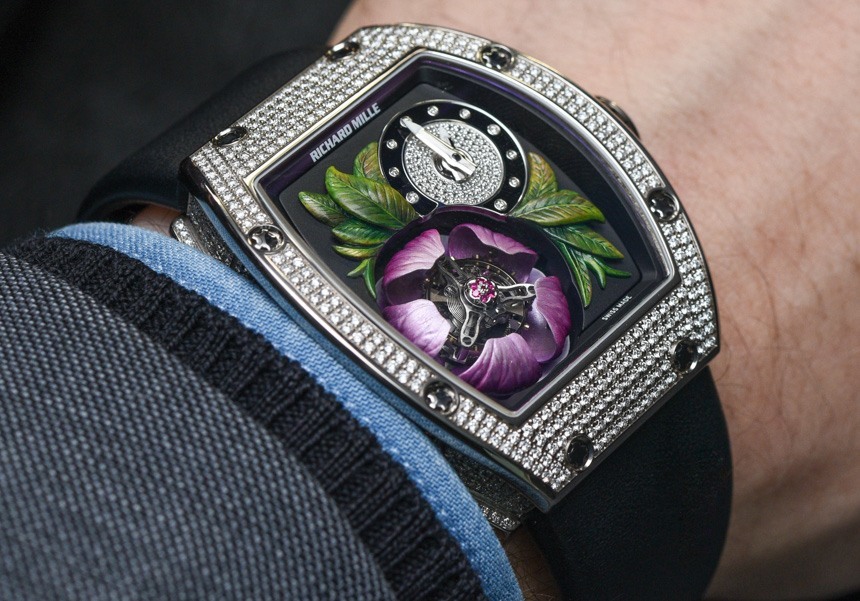 When it comes to iconic shapes in watches, the Richard Mille tonneau case is certainly one of the more notable. Also notable is the fact that watch models aimed at women generally have a plethora of jewels plastered all over them, and while I am generally averse to that particular styling trick, I am about to give it a pass, as the Richard Mille RM 19-02 Tourbillon Fleur hides – and reveals – some genuinely fascinating technical feats inside its diamond encrusted case.

To begin with, have a look at the magnolia that appears down at the 7 o’clock position: sure, flower motifs are not anything new when it comes to watches. Those five hand-formed and -painted petals at first appear to be obscuring the flying tourbillon, but every five minutes, (or with the press of the pusher at 9 o’clock) the “secret” of the mechanism is revealed. 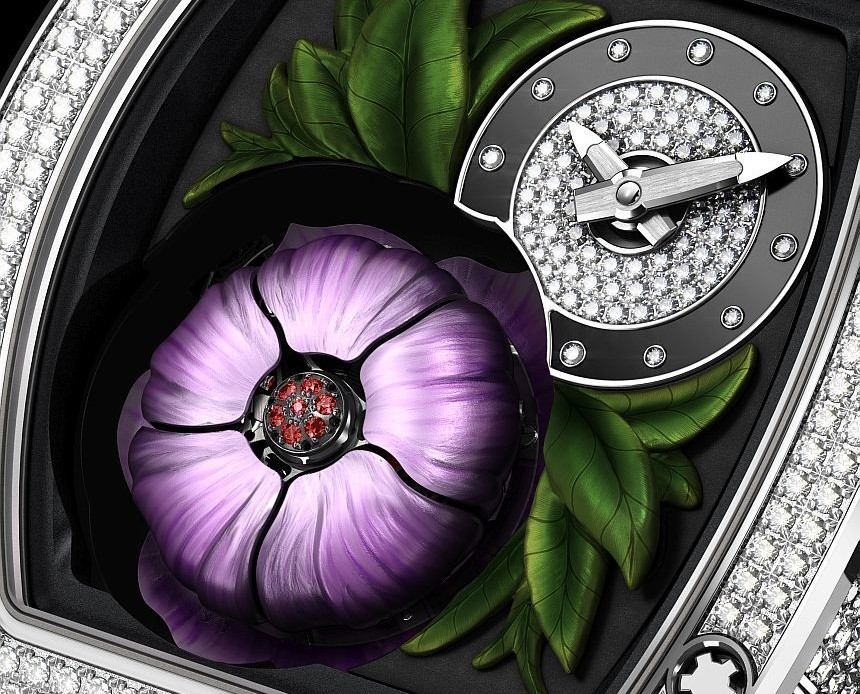 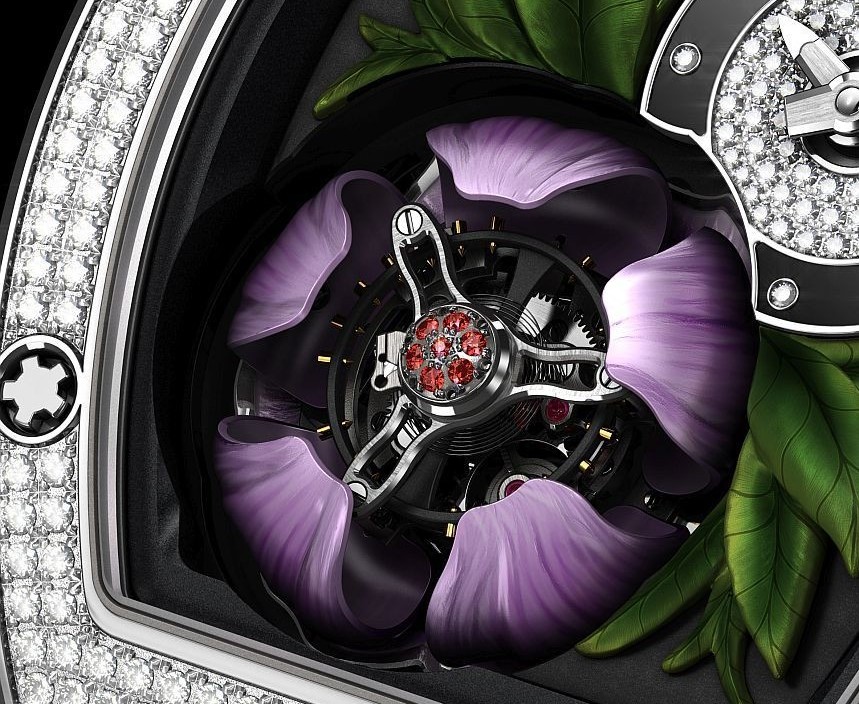 While the tourbillon in itself already is a mechanism that many watch enthusiasts prefer because it provides non-stop “eye candy” – as opposed to more static complications like a date –, this new take on the flying tourbillon takes that a few steps further by setting it in motion in a new and unexpected way.

The magnolia blooms, with its white gold petals opening up. Not only that, the jeweled “stamen,” which the tourbillon is representing, actually shifts up 1mm, mimicking what the actual flower does when it blooms in nature. In other words, with the Richard Mille RM 19-02 Tourbillon Fleur, you get not just a mechanical watch, but also a rather clever automaton. 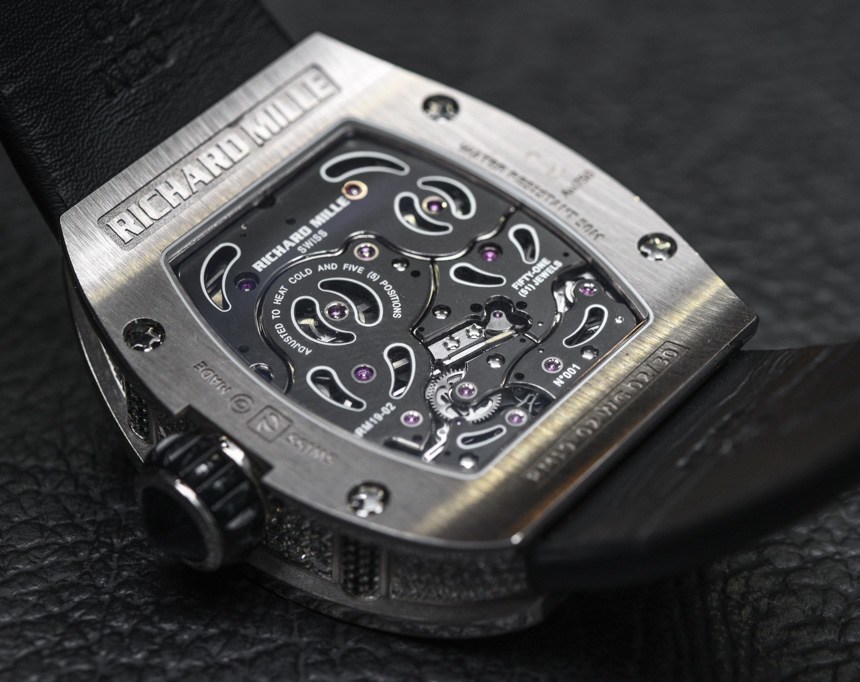 Richard Mille, being who they are, though, are not about to leave things just with a trick like that (impressive as it is). The movement that makes all of this possible is made from grade-5 titanium, with a variety of finishes. You can see part of the movement via the exhibition case back, but this is actually rather uninspired – and arguably not as fancy and colorful as one would expect on a women’s watch – especially when compared to the show you have on the dial side. 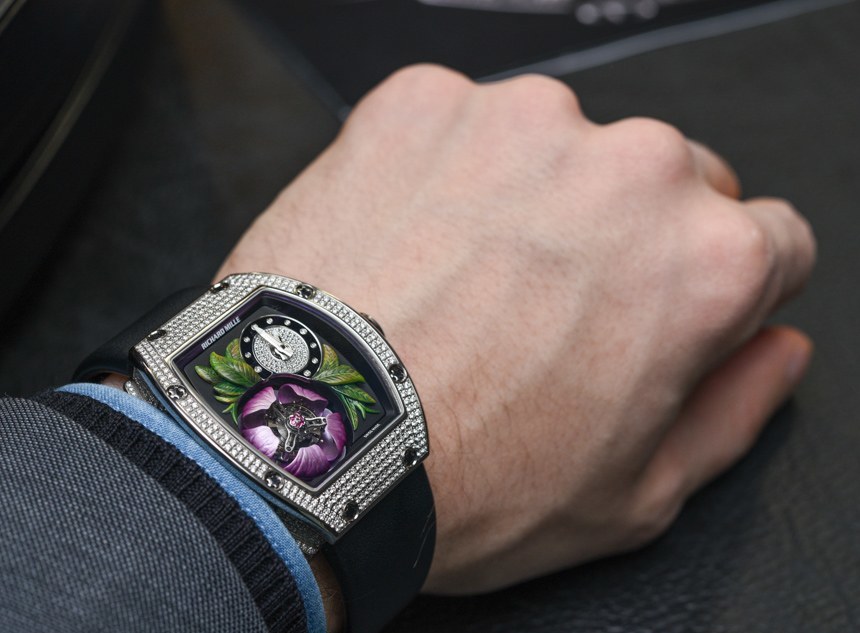 Finally, it has to be said – this is a watch that will attract attention, due to how encrusted it is with diamonds and precious gems. In some ways, this forces the magnolia compete for attention with the sheer bling of the massive 45mm x 38mm case. I am sure the brand had a very good reason for going this route, but I do wish there was a simpler finish to the case, allowing the automaton mechanism to not have to share any of the spotlight.

Nevertheless, it is interesting to consider the fact that Richard Mille quite possibly could have gotten away with the same “fleur” design without animating it and just using it as decoration, they did go the extra mile and made the effort to engineer a movement that allowed for such an interesting and unique complication. 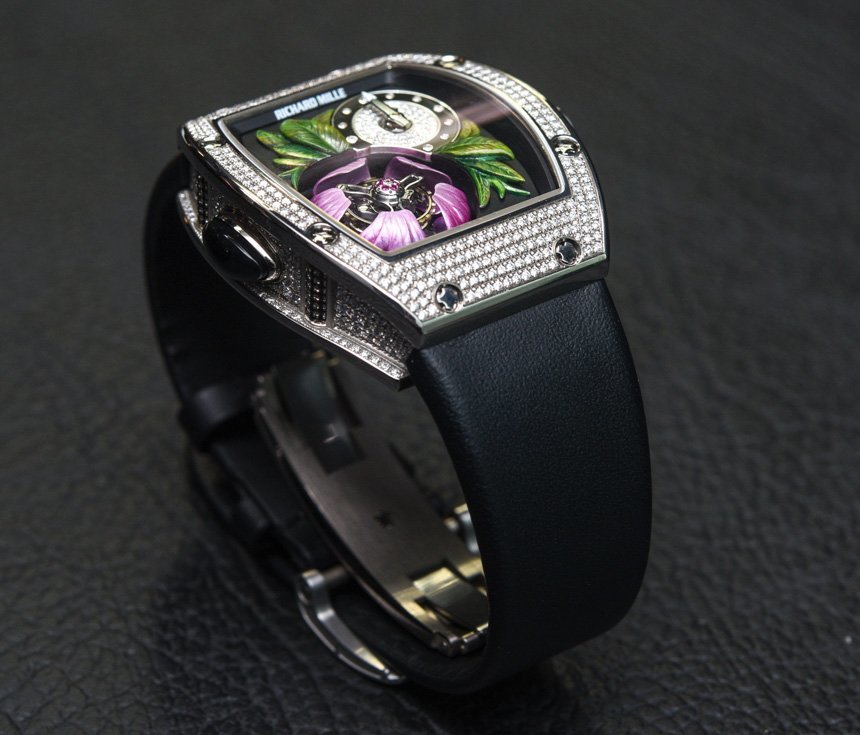 Then again, perhaps if you pick up one of the thirty pieces that will be available at $1.09 million, you might be able to work with the brand to make the case something more to your liking. While the automaton is something that is certainly not practical, it truly is a piece of kinetic art, and is the sort of thing that makes me really enjoy working around watches. richardmille.com