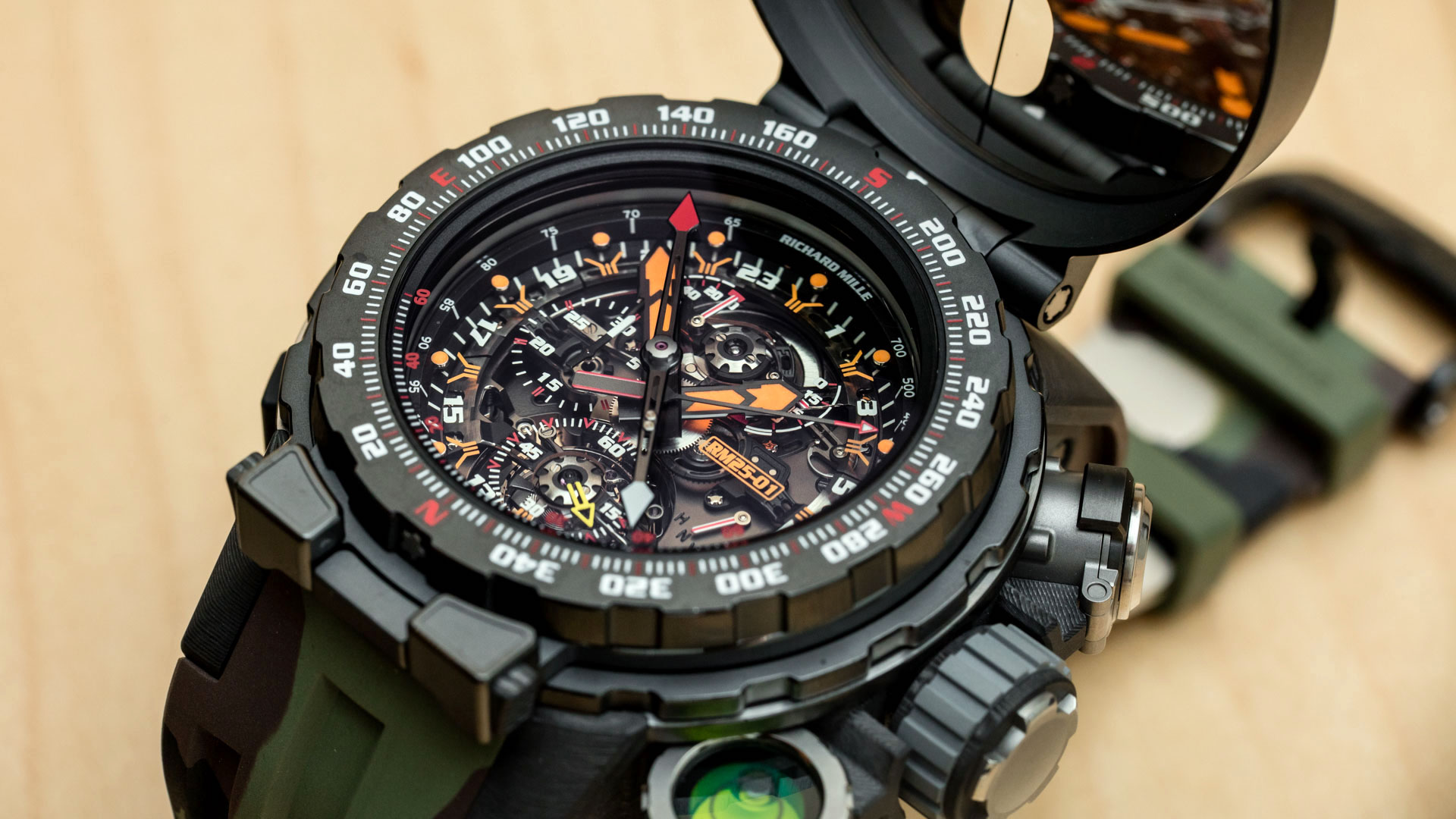 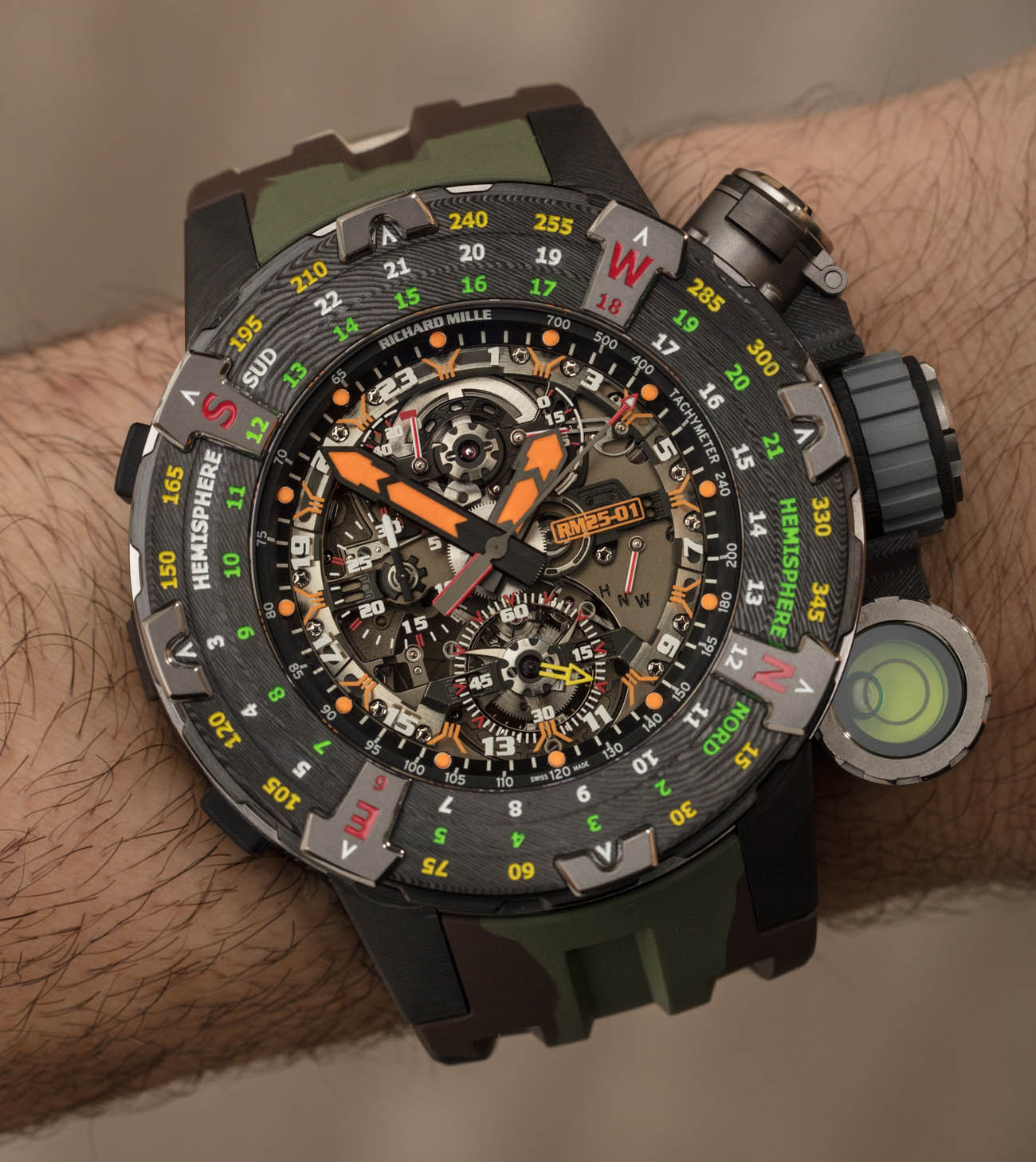 Now toward the end of 2018, I get to think back on the many new timepieces I played with over the course of the year and try to decide which left a lasting impression. The almost million-dollar Richard Mille RM 25-01 Tourbillon Adventure produced for and in collaboration with actor, director, and action movie star Sylvester Stallone is certainly one of them. aBlogtoWatch originally debuted the Richard Mille RM 25-01 Tourbillon Adventure watch here, and I recommend you check out that article for a more technical and background discussion on the watch and why Richard Mille produced it. If you don’t know anything about Richard Mille or Sylvester Stallone as a watch collector and industry personality, you might want also want to check that previous article out. 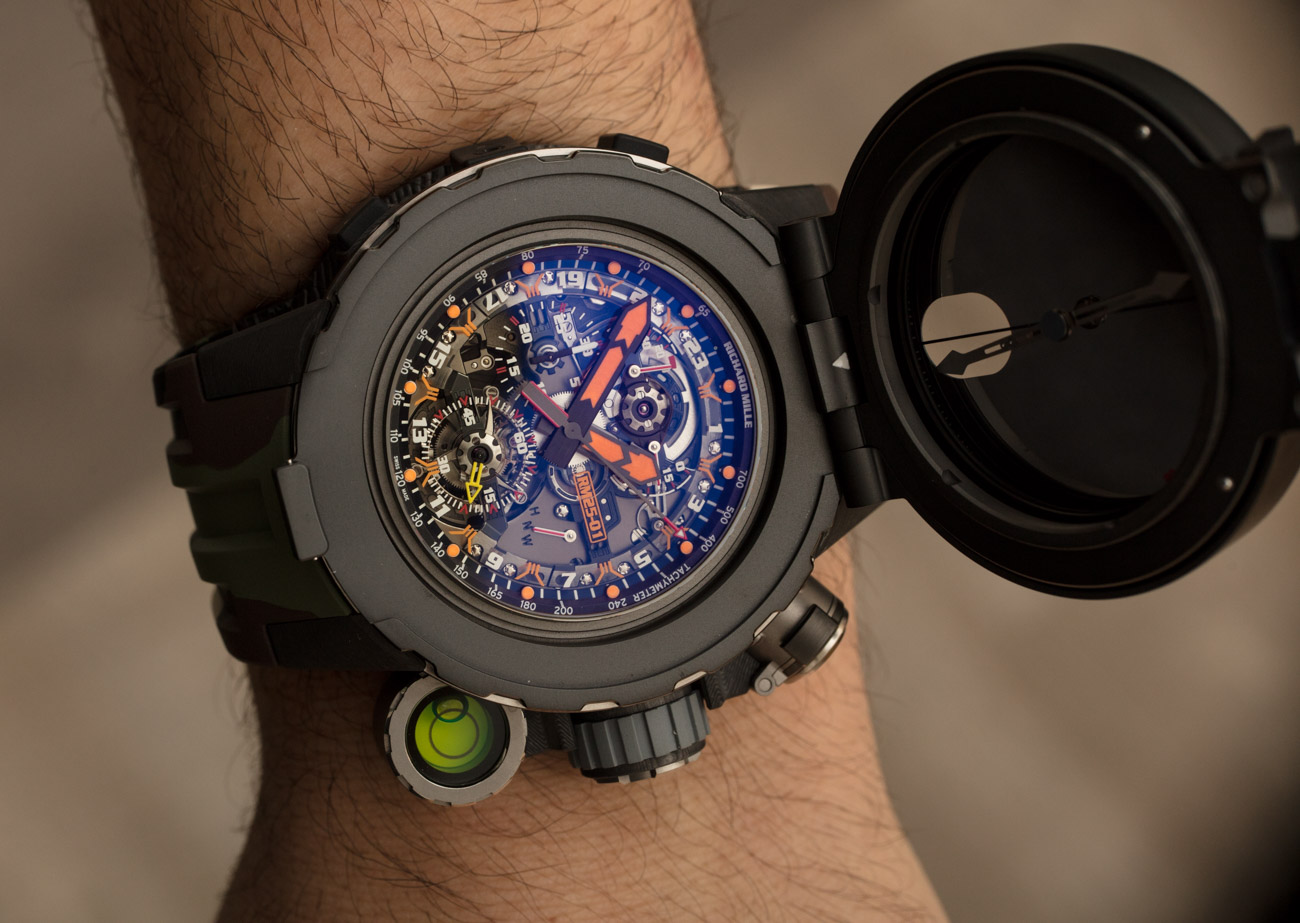 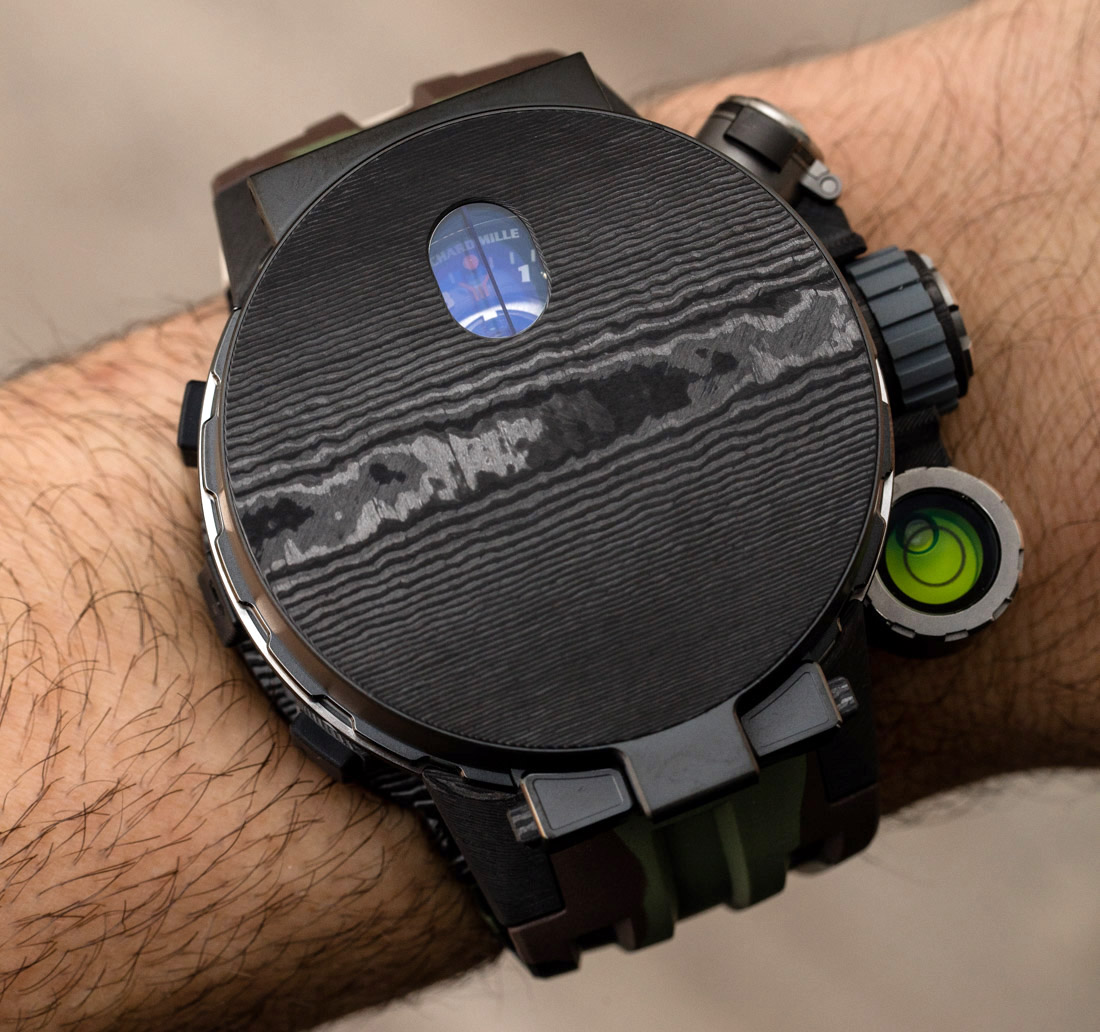 A few months after the Tourbillon Adventure was debuted (out of schedule and almost by accident because someone felt the need to share it on social media) I got a chance to check out the final piece hands-on. It’s really very cool and certainly the type of timepiece collectors such as myself like to fawn over. Unfortunately, I’m not one of the collectors who can afford one. That’s OK, I accept the fact that you need a Stallone-like career to purchase and pull off one of these. There are two elements of the watch I didn’t get to see. Those were the special clip-on attachment that the removable bezel compass attaches to as well as the water purification tablets. Yes, water purification tablets. 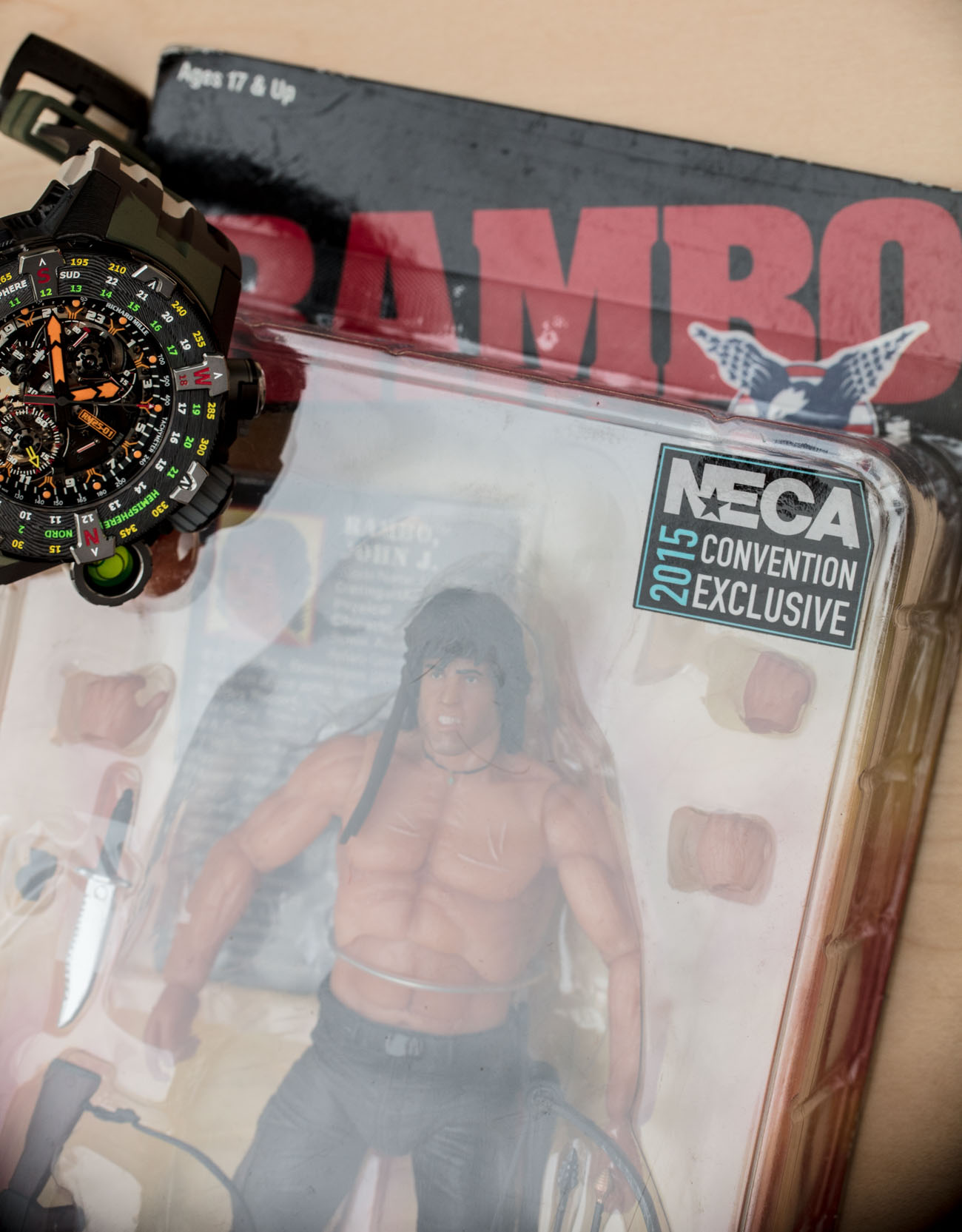 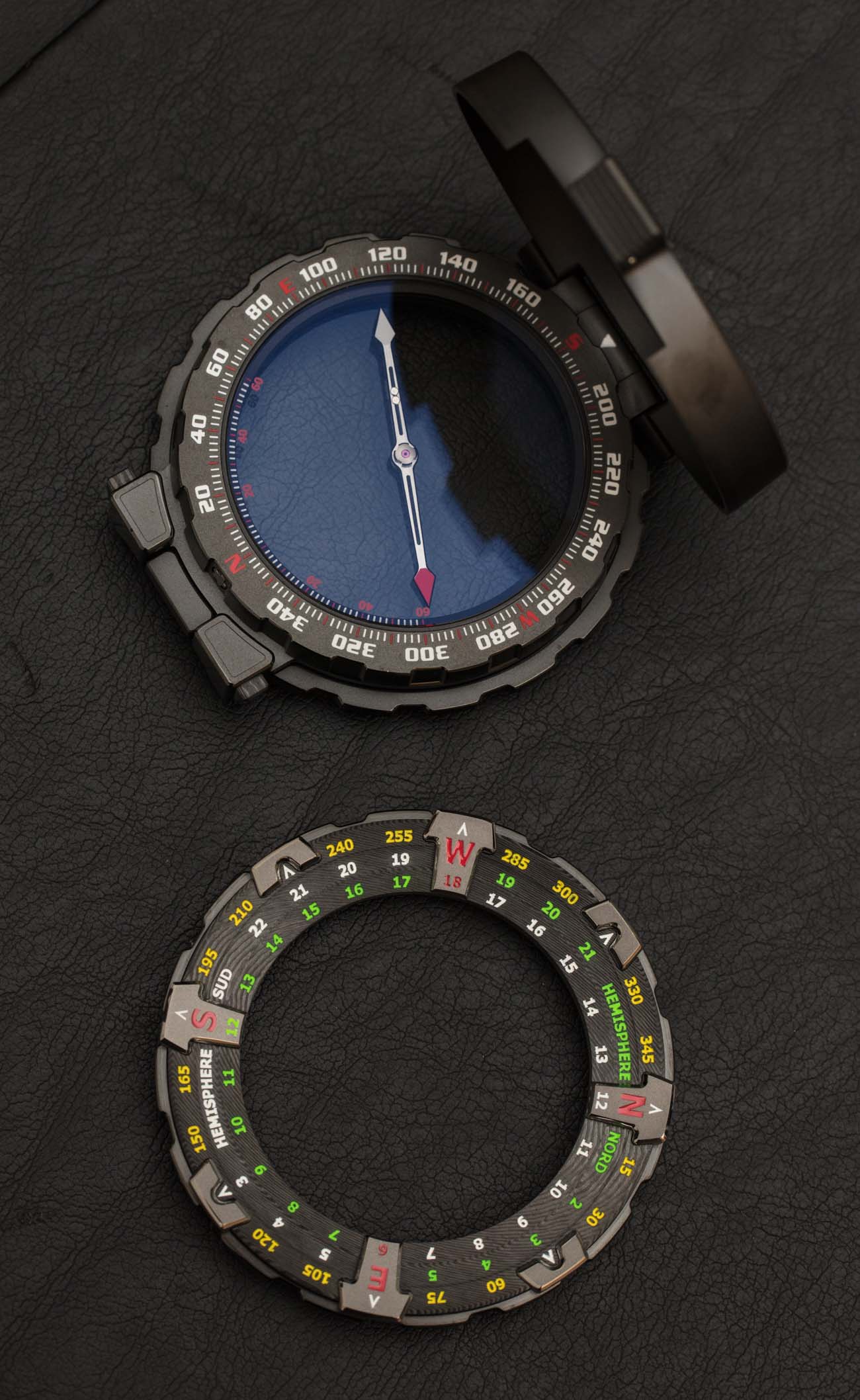 The Richard Mille RM 25-01 Tourbillon Adventure is a strange limited-edition product given what its story and price are like. Part fantasy survival tool and part homage to Stallone’s John Rambo character, the watch is a fancy mechanical tech toy for adult men who’d rather be outside (fighting for their lives, presumably). In addition to telling the time, the watch’s in-house-made RM25-01 manually wound movement includes a 30-minute chronograph, power reserve indicator, mainspring torque indicator, function selector hand, and of course a tourbillon. Other features in the watch which are not part of the movement are a compass, navigational bezel, bubble level, and small container labeled “water disinfection” to hold those tablets I was talking about. 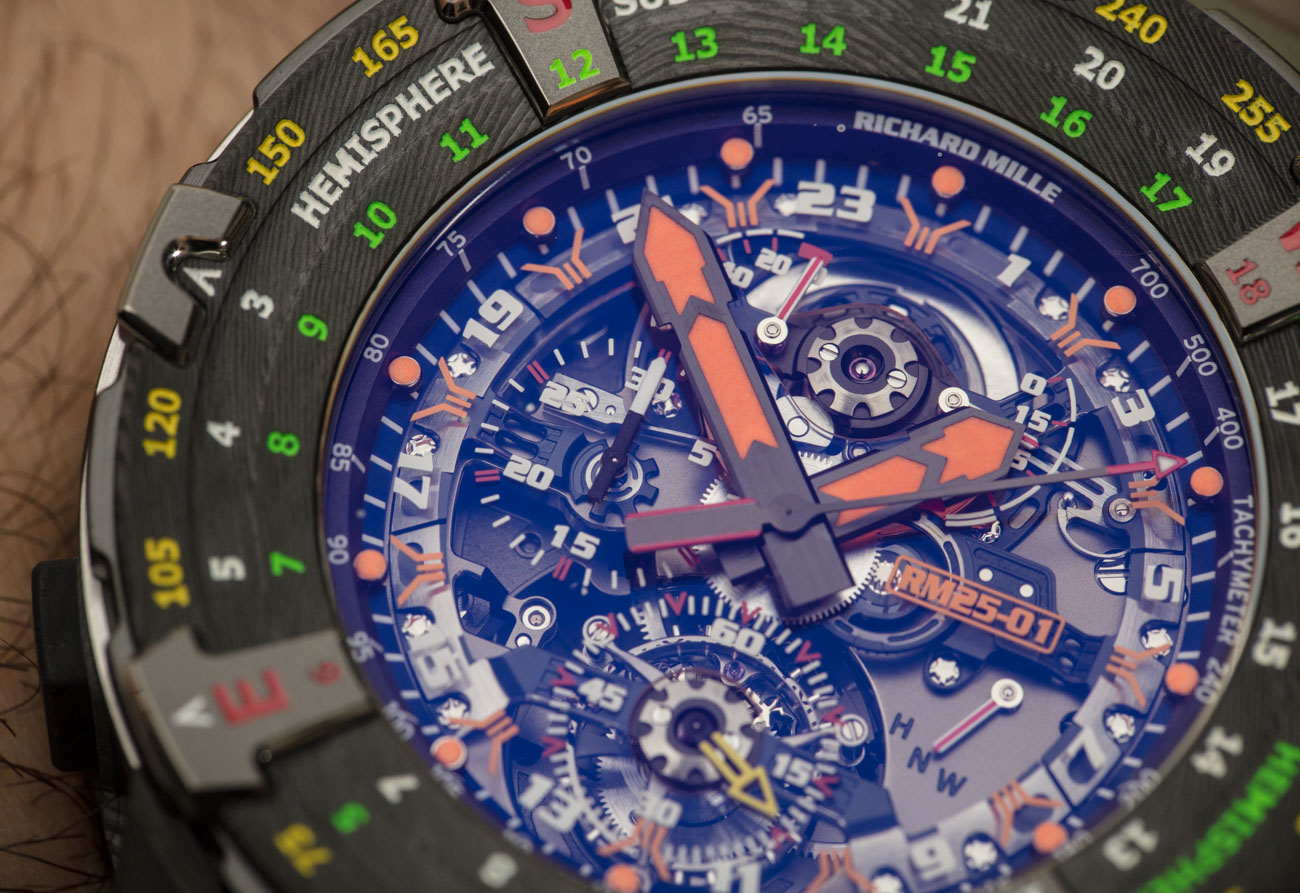 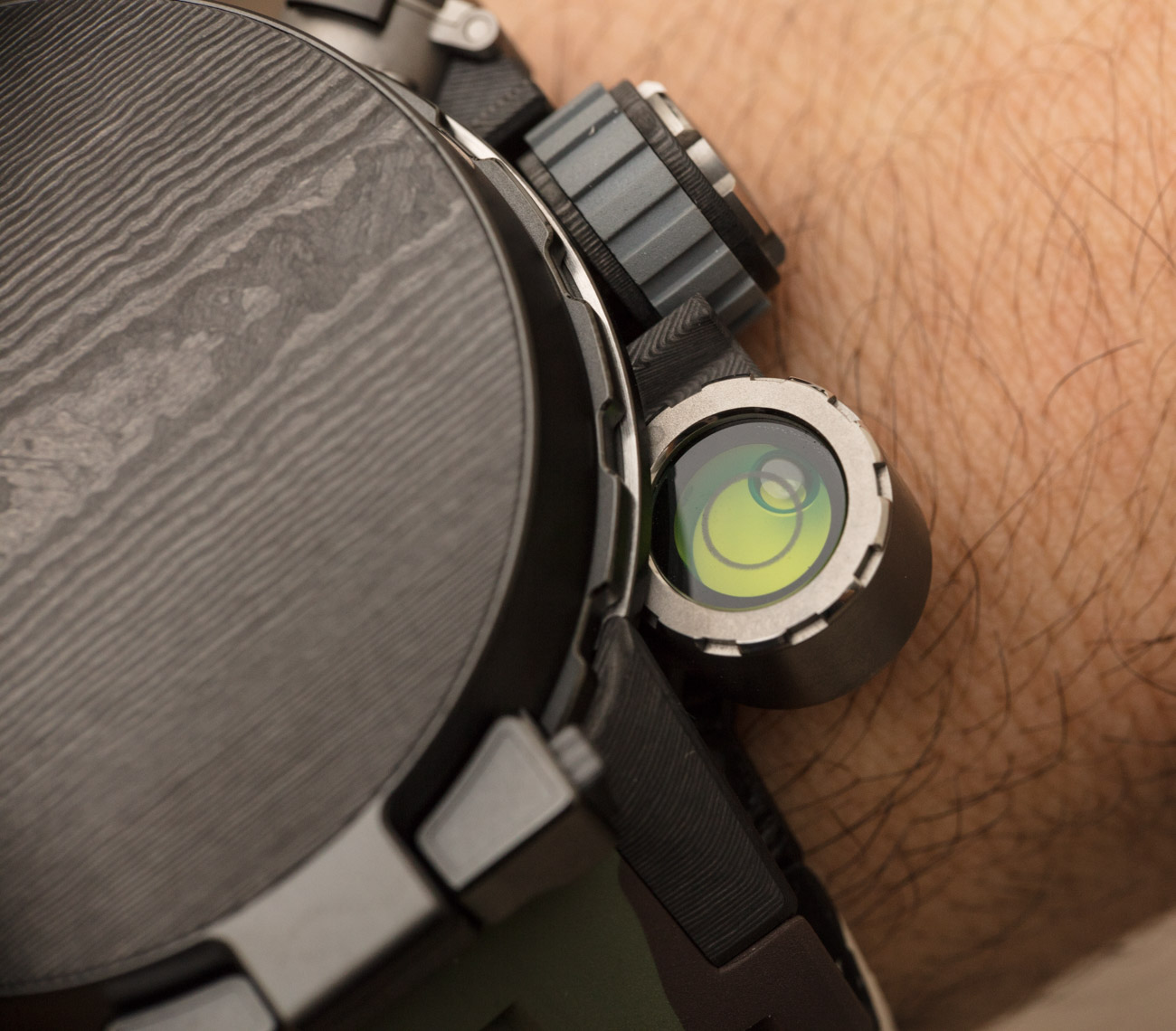 These tablets are probably the least expensive part of the watch, but the way Richard Mille spoke about them I am not sure they even come with the watch. Though how is that possible? For this type of money, Richard Mille can easily afford to include literally hundreds of the said tablets – I’m not even sure how many can fit in the capsule (which is really nicely engineered, by the way). Cool Richard Mille water disinfection tablet carrying case anyone? Richard Mille more or less understands that its customers will likely not put water purification tablets in the small opening and closing cavity located on the 2 o’clock hour indicator. Though they might put some other type of “medicine” in there – pretty much anything which can be described as an “adventure in a pill” should do just fine. 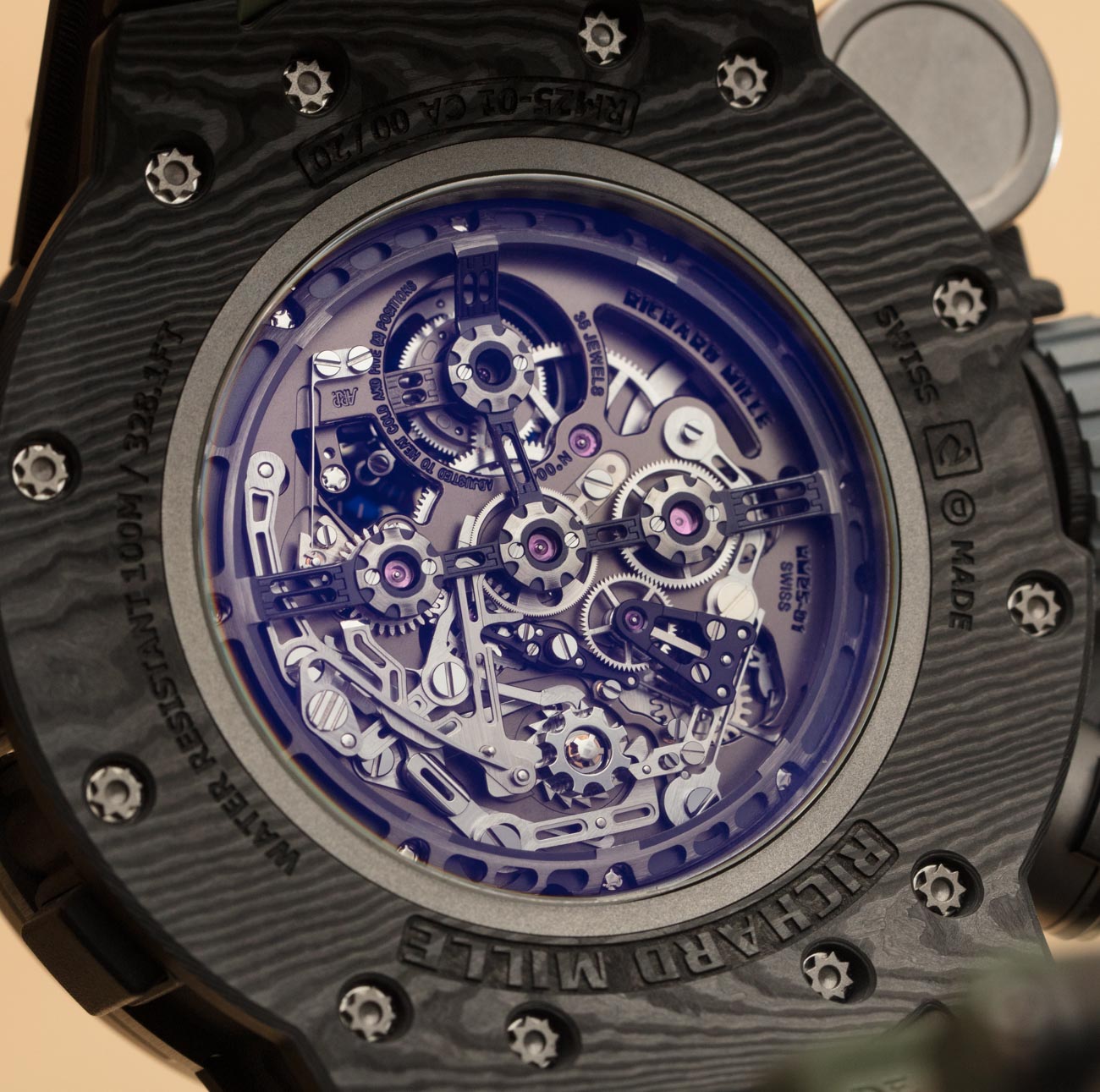 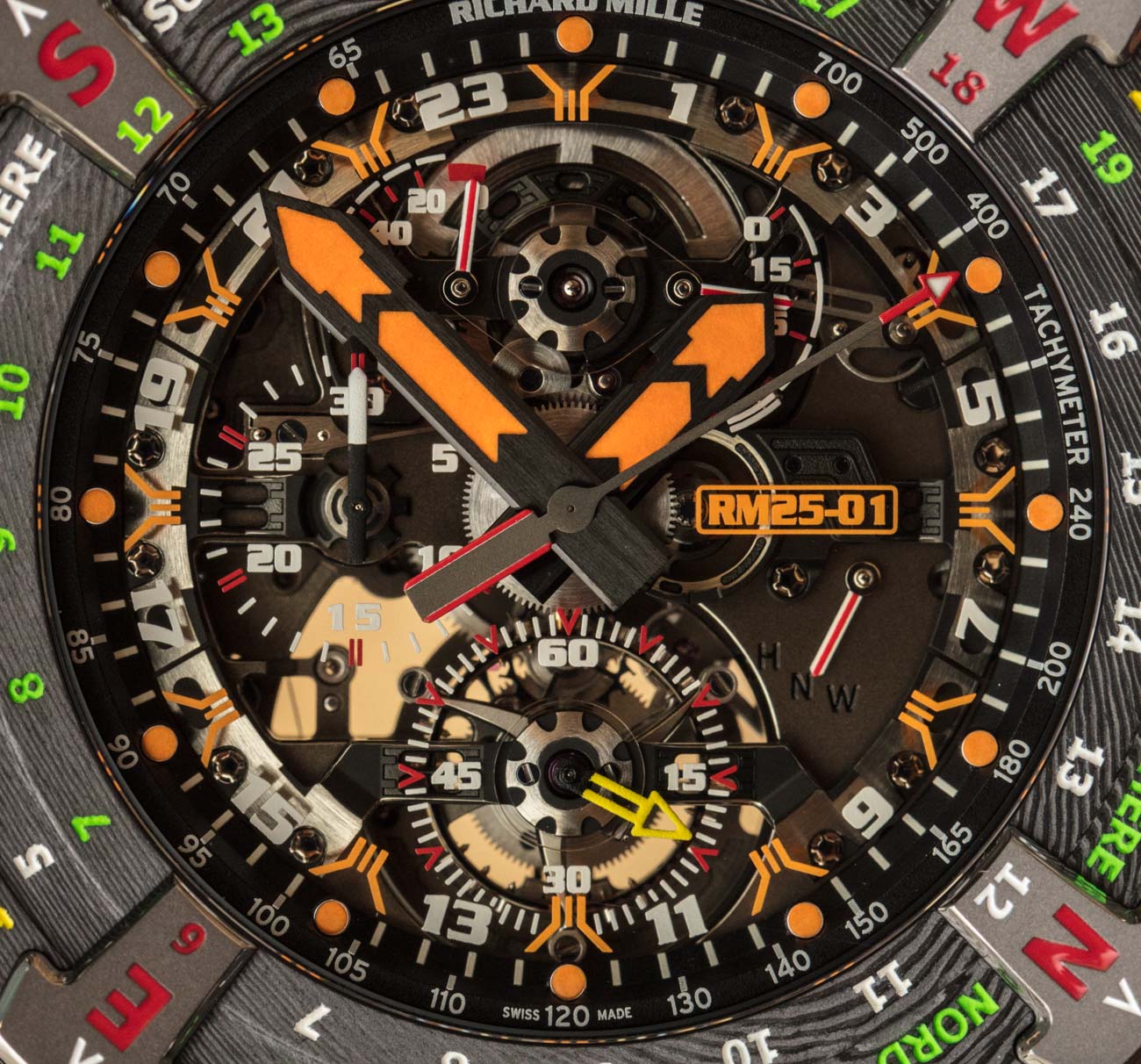 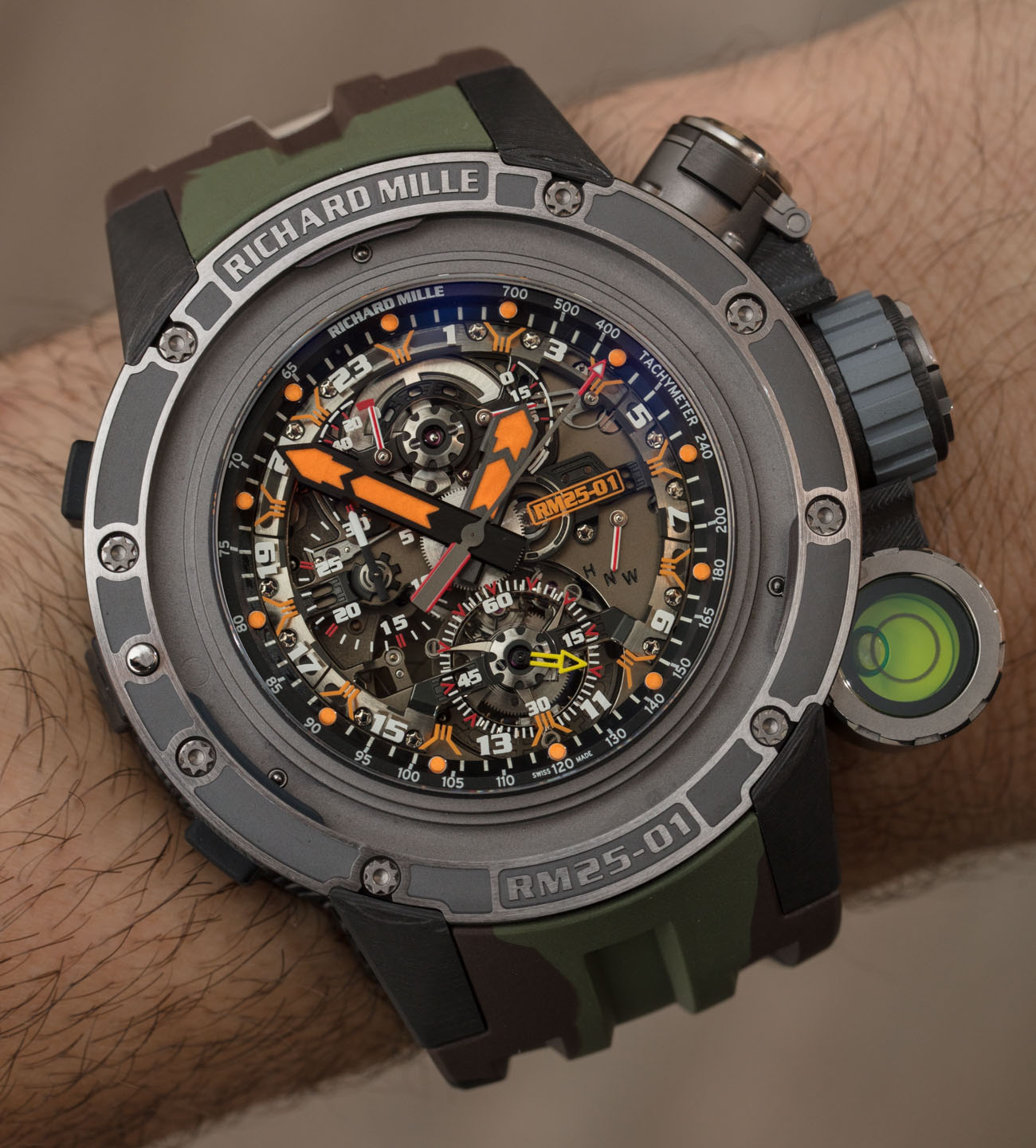 The RM 25-01 wouldn’t be a Richard Mille without an intensive view into the movement from both the front and rear of the watch. The skeletonized dial shows off the complex tourbillon-based mechanical movement which operates at 3Hz (21,60bph) with about 72 hours of power reserve. The movement is produced for Richard Mille by APRP (Audemars Piguet Renaud & Papi) – a specialist watch designer and manufacturer that Richard Mille has worked with from more or less the beginning of the company. Although the RM25-01 movement appears to be unique in how it is rendered, I would have loved for Richard Mille to use an opportunity like this to debut a totally new movement or complication. Then again, even though they didn’t do that with the movement, the Tourbillon Adventure is the first Richard Mille watch with the compass, level, and small case capsule. So there are at least a few functional debuts here.