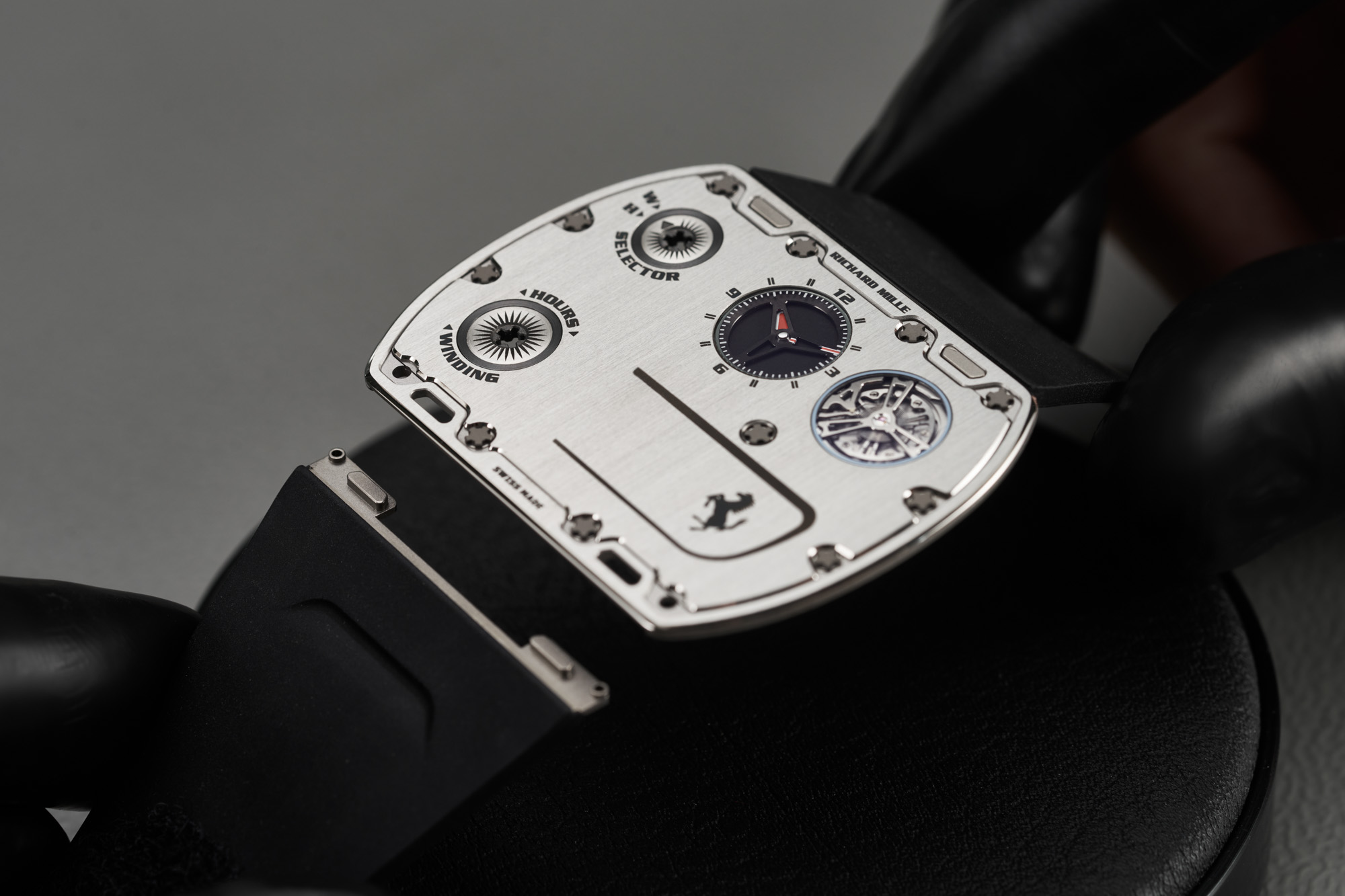 To produce the thinnest mechanical watch ever is mighty impressive. To score Ferrari as a partner is elevating. To charge $1,000 for every micron in the thickness of your —in truth, impractical — product is more than enviable. And yet, sometimes, the end result of such incredible achievements can still be – odd. It seems that the record for the world’s thinnest watch is getting passed off quite frequently these days, and just a few months after Bulgari took the title with the Octo Finissimo Ultra at 1.8mm in thickness, Richard Mille has set a new one by just 0.05mm with the new RM UP-01 Ferrari. Measuring 1.75mm in total thickness and crafted from grade 5 titanium, the new model is an ultra-thin, ultra-light timepiece that continues Richard Mille’s legacy of pushing the boundaries of mechanical timekeeping — and that Richard Mille does not once refer to as a record-breaking watch. Interesting. 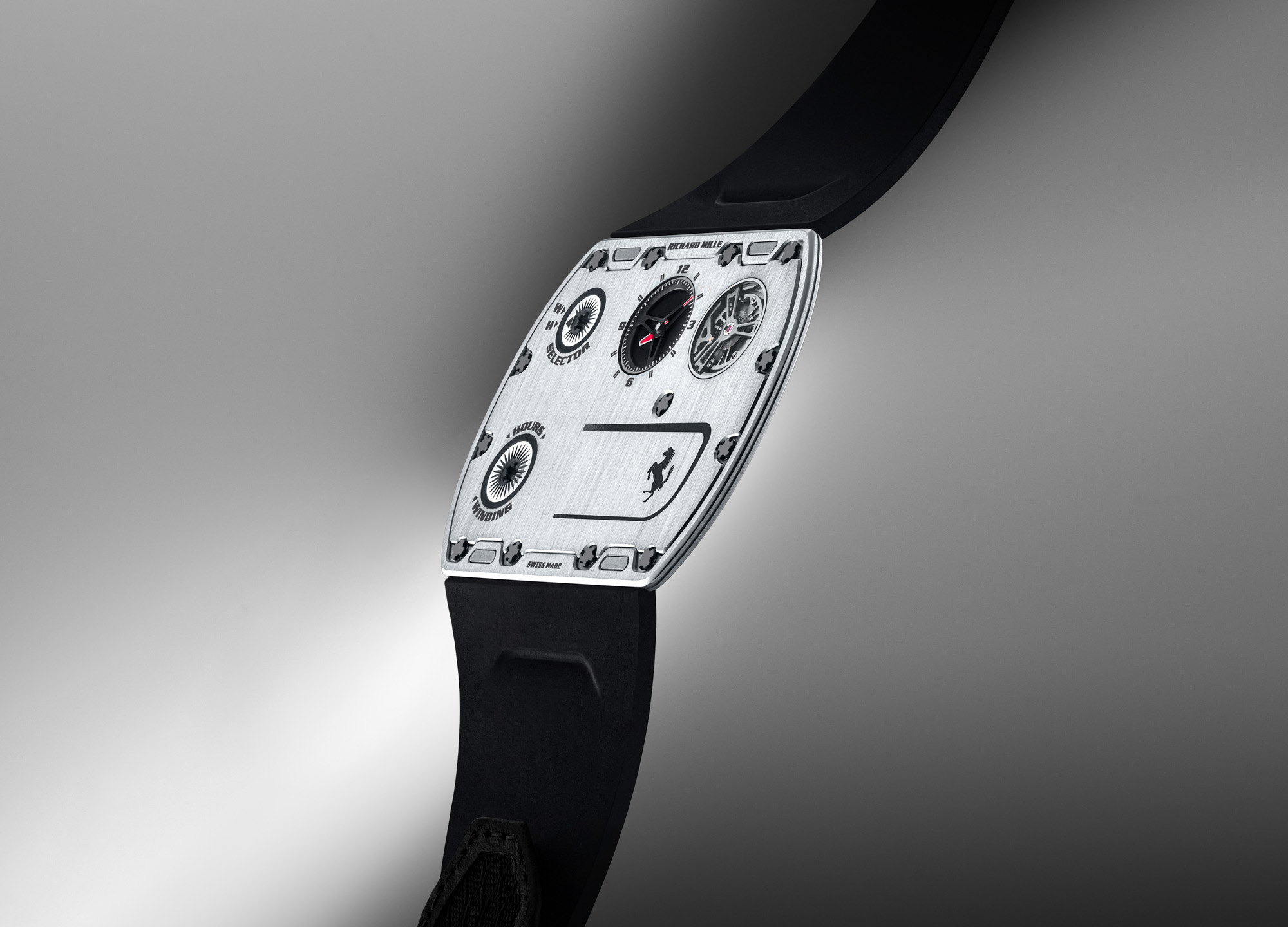 While the Bulgari Octo Finissimo Ultra (hands-on here) and the model from Piaget that held the record prior to that both achieved ultra-thinness by having the cases double as structural components for the movement. By contrast, according to the brand, the new Richard Mille RM UP-01 Ferrari uses a more traditional case structure in which a complete movement is placed inside an outer case. That case is more of a monobloc design in that it appears to have its case profile (however slim) and caseback crafted from the same block of titanium and the front, or rather the bezel, is the other piece. Most watch cases today use a front, a middle case and a caseback.

What’s the benefit of all this? Well, this exacting construction and that uniquely shaped gasket help the RM UP-01 offer a 10m waterproofness rating — not something one would expect from such a watch, but then again, Richard Mille knows its customers are not afraid to play with their million-dollar toys. And neither are its brand ambassadors, like Nadal, who’s hitting his 135-mph first serves wearing a Richard Mille tourbillon. As you might imagine, having the mainplate of a movement double as the middle case or caseback of a watch is hardly ideal for shock resistance — although, to its credit, Bulgari used tungsten carbide to provide structural rigidity, while Richard Mille uses grade 5 titanium. 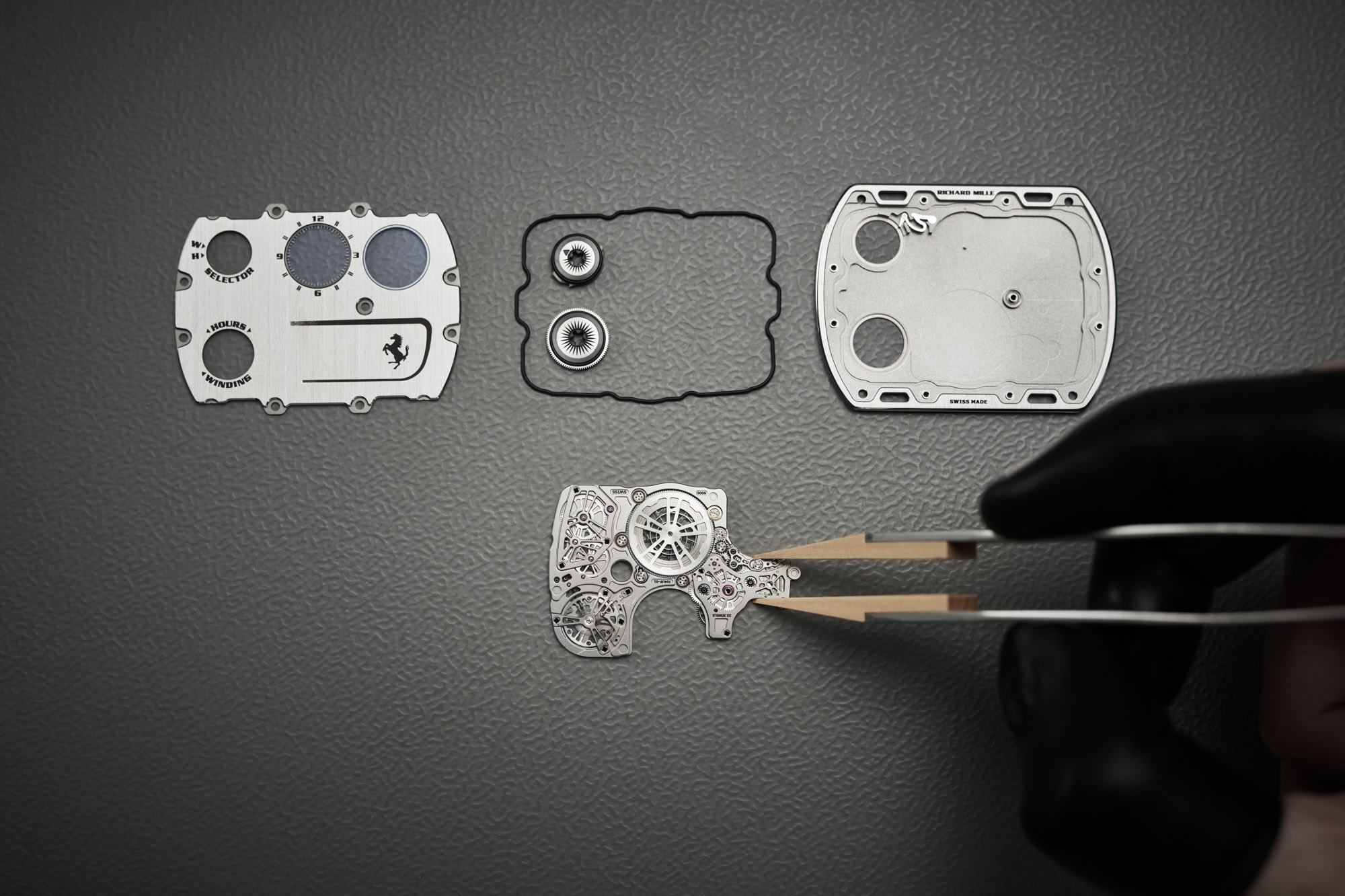 The 51mm-wide by 39mm lug-to-lug case could best be described as a wide rectangle with rounded sides, and despite being incredibly thin, the RM UP-01 Ferrari still features the brand’s signature exposed screws surrounding the perimeter. The overall case shape somewhat resembles Richard Mille’s classic tonneau design rotated 90°. However, rather than having a traditional dial with centrally mounted hands covered by a crystal, the top of the Richard Mille RM UP-01 Ferrari largely consists of a titanium surface with four small circular openings and the Ferrari racing horse logo engraved upon it. 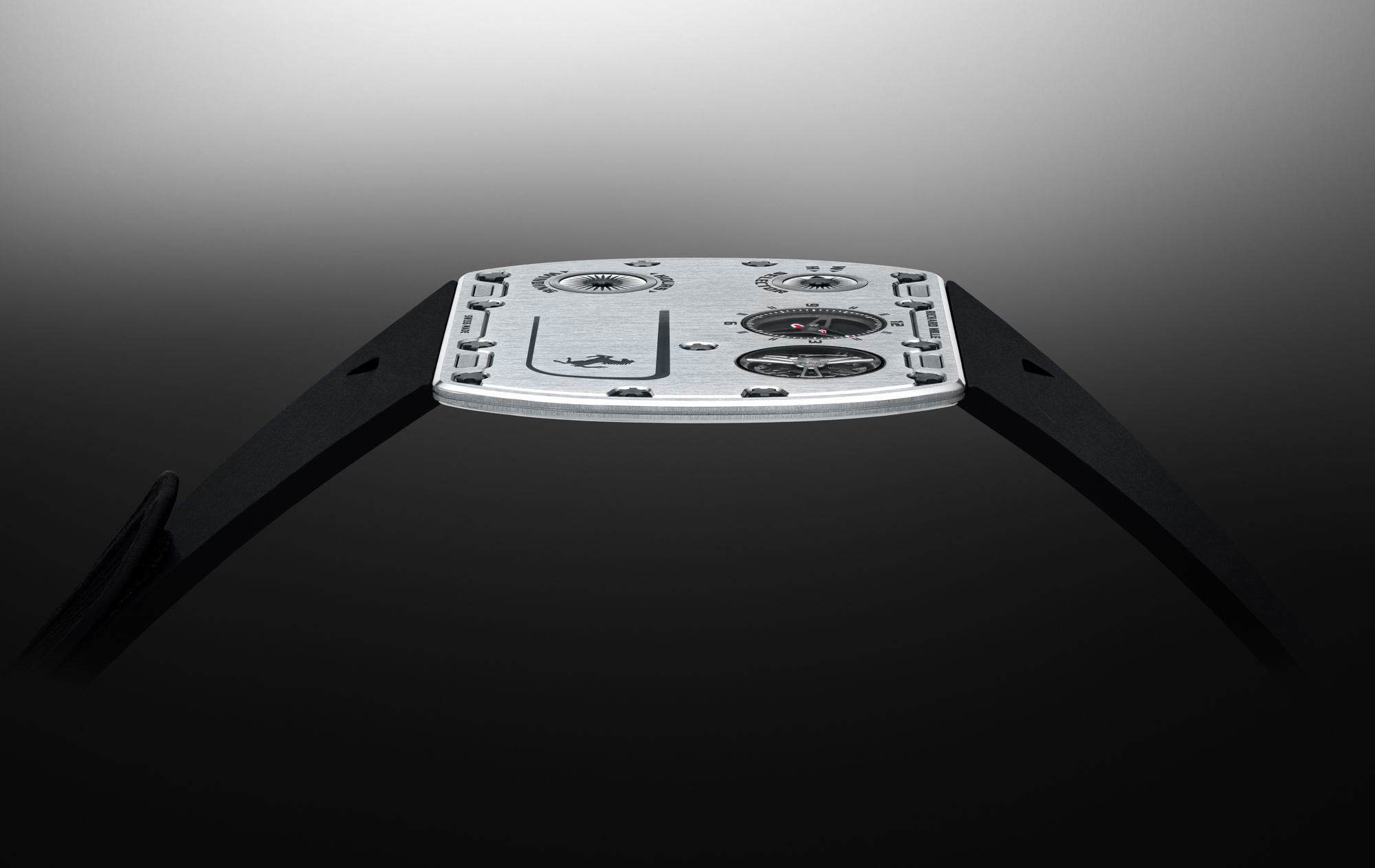 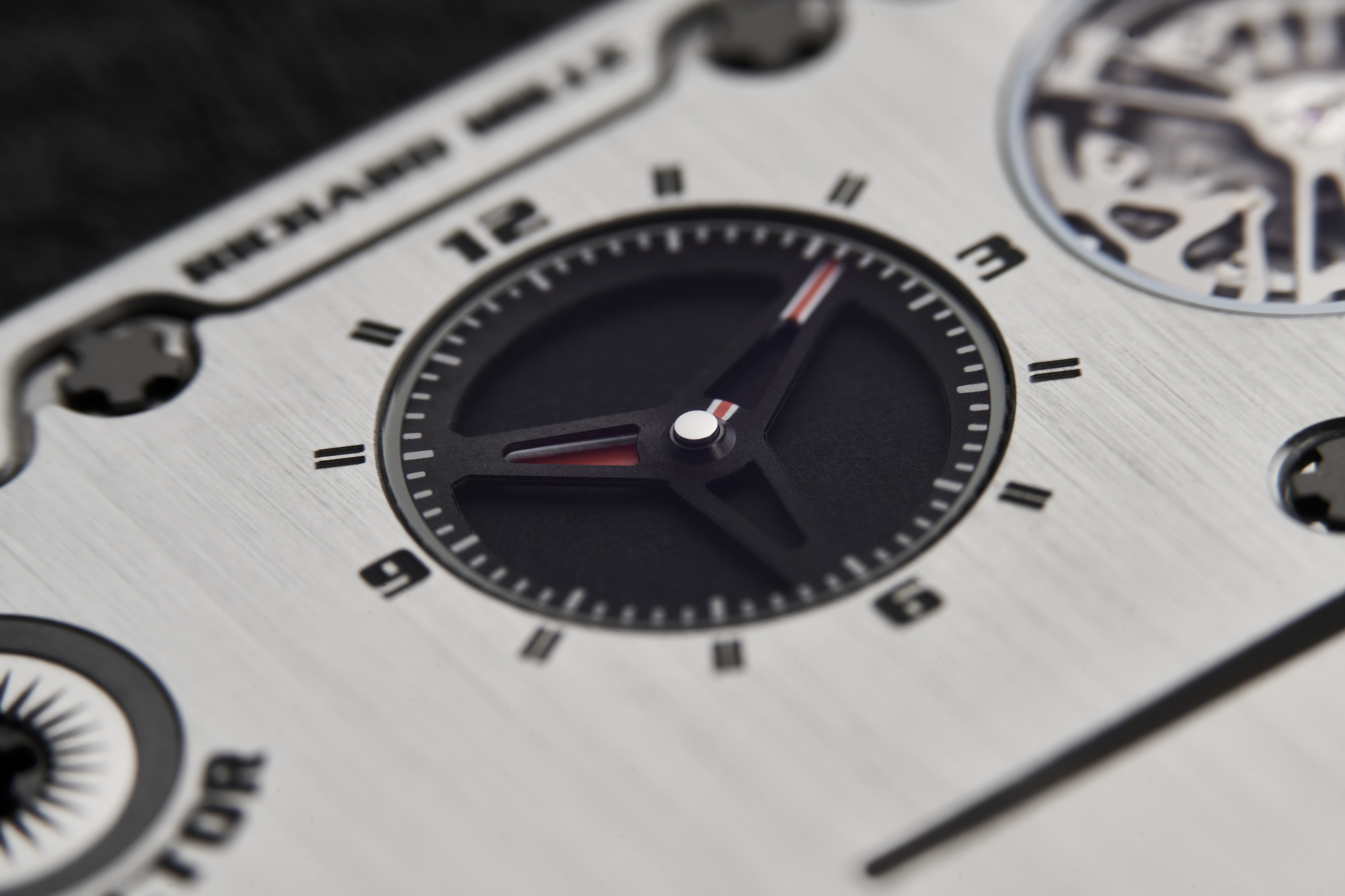 Time is displayed by the small (very small) register in the center of the top half of the face of the watch, while the circle to the right of it offers a view of the balance, and both of these are covered by thin sapphire crystals. Meanwhile, the two circles located on the left side of the watch are used for accessing the movement. Using a traditional winding crown setup would have resulted in a significantly thicker structure, so Richard Mille opted for a unique design in which two rotating disc-shaped crowns sit flush against the face of the watch, with the top one serving as a function selector switch, and the bottom one dedicated to winding the watch and setting the time. The back side of the case is a single piece of grade 5 titanium that bolts onto the front half, while ceramic inserts shroud each one of the two setting discs to reduce friction and help provide the RM UP-01 Ferrari with 10 meters of water resistance. 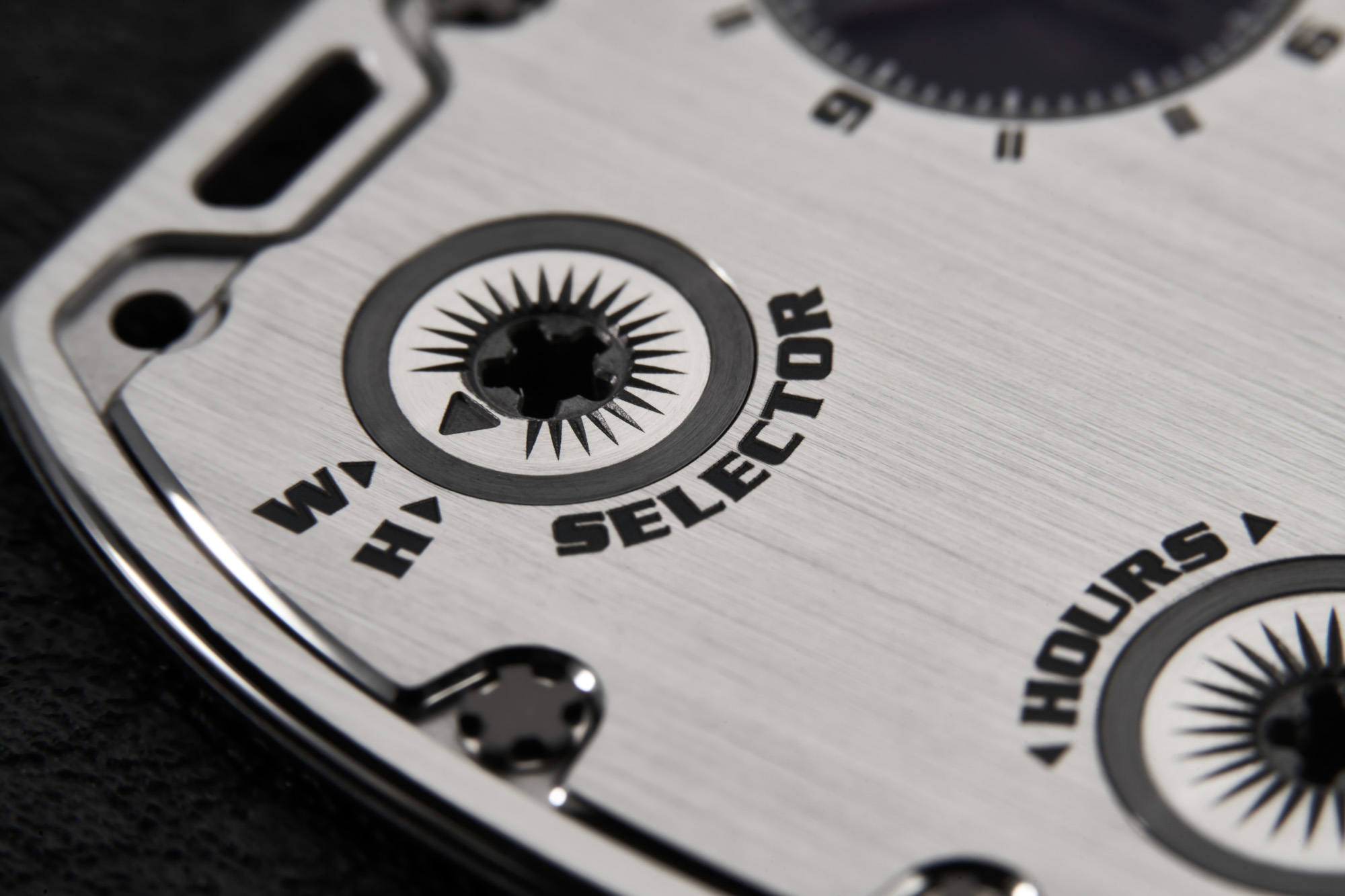 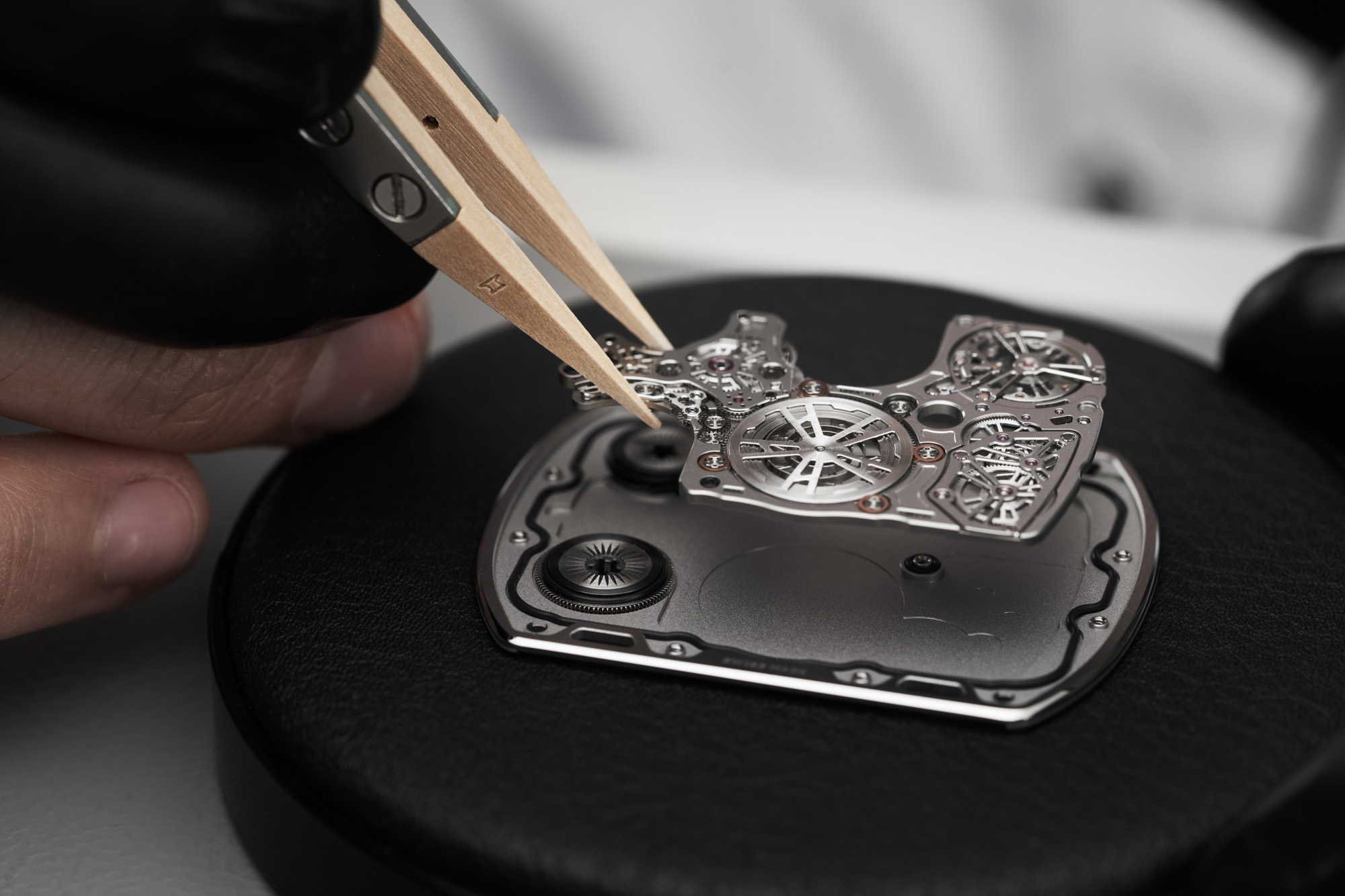 Powering the Richard Mille RM UP-01 Ferrari is the ultra-thin Caliber RMUP-01, which was developed in collaboration with the workshops of Audemars Piguet Le Locle, the horological skunkworks previously known as Audemars Piguet Renaud et Papi or APR&P, for short. APR&P has worked extremely closely with Richard Mille on most of the brand’s highly complicated pieces from design to production. Manual winding and offering a display of the hours and minutes along with a function selector, the RMUP-01 movement measures just 1.18mm in total thickness with a weight of just 2.82 grams, yet it is capable of withstanding accelerations of more than 5,000 G’s. It offers users a 45-hour power reserve matched to a higher frequency of 4Hz, better suited to watches that are expected to be frequently exposed to shocks. 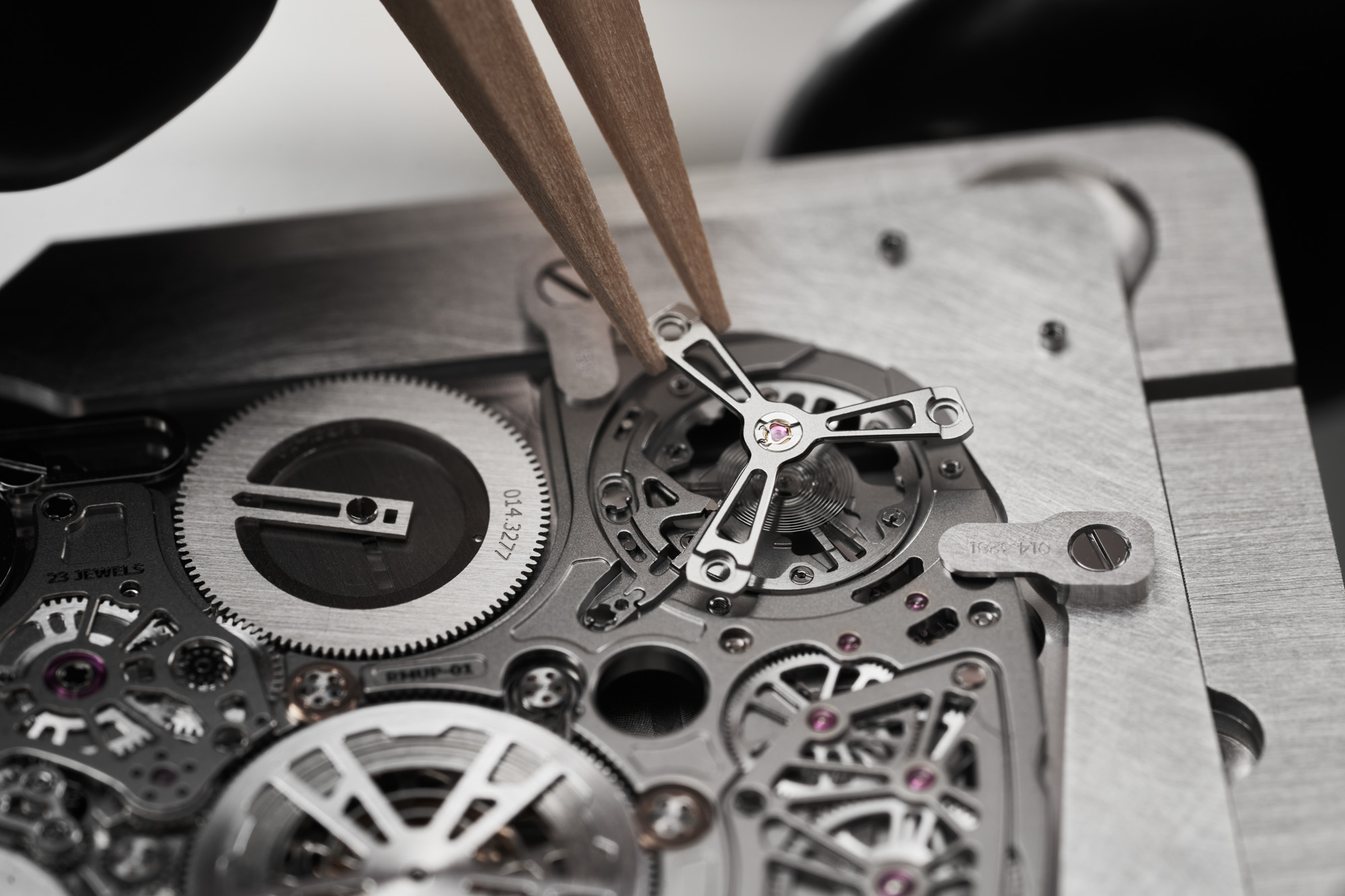 The movement has some fully redesigned components to support Richard Mille on its quest to thinness. To reduce depth, the small plate of the balance and the guard pin – two parts that prevent the anchor from slipping back during the free phase of the balance wheel’s movement – were eliminated. Instead, the new ultra-flat escapement, also patented, replaces these ‘anti-reversal’ elements with an elongated fork with new horns. To ensure maximum strength and lightness, caliber RMUP-01 has a baseplate and skeletonized bridges in grade 5 titanium, and the movement features a redesigned and patented escapement to further reduce height, along with a titanium variable-inertia balance wheel for optimum stability and precision. 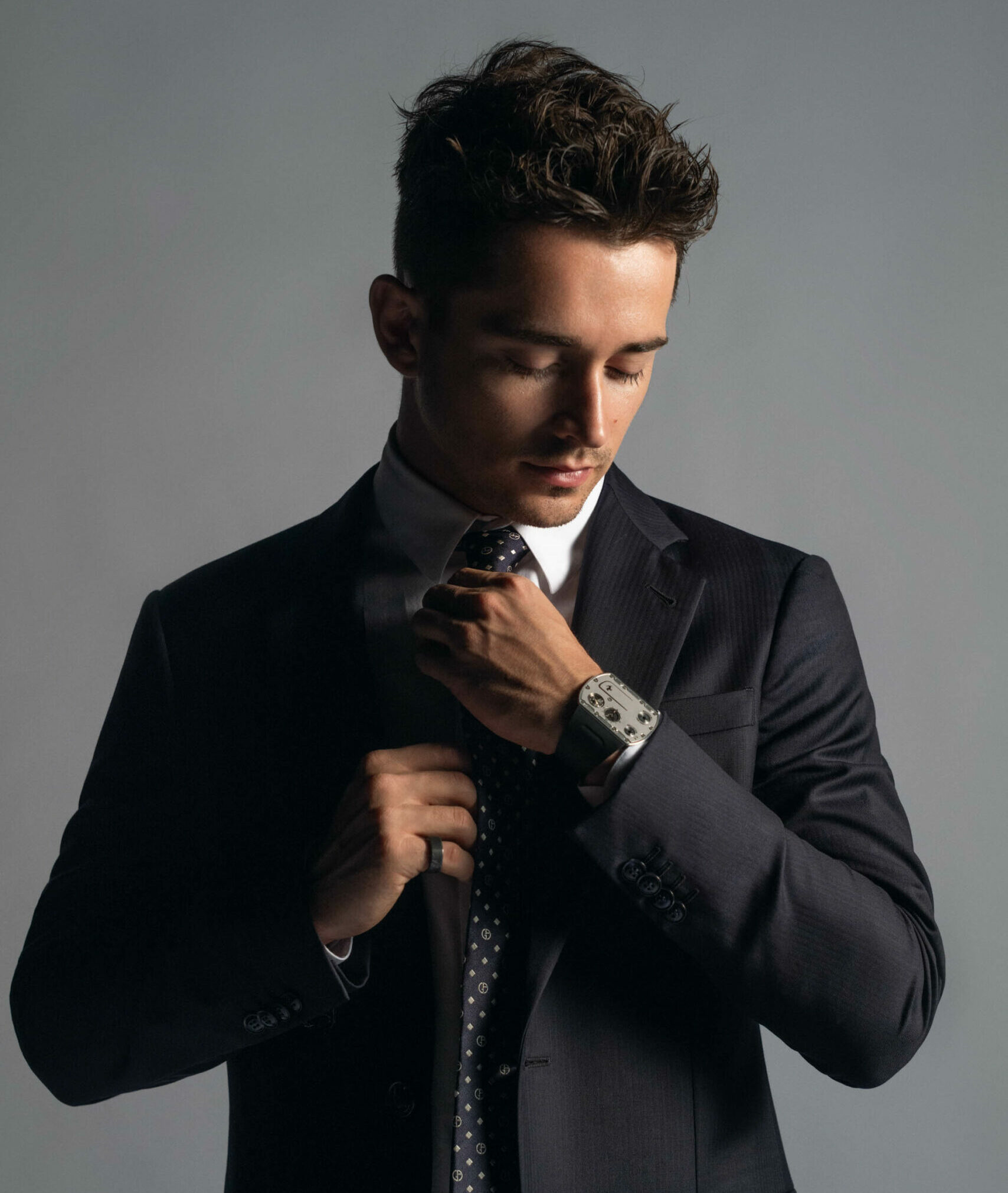 At just 1.75mm in total thickness, the entire case of the Richard Mille RM UP-01 Ferrari is thinner than the black rubber strap attached to it, which is quite hilarious if you think about it. And yet, the challenge to make such an ultra-thin watch look good on the wrist remains an almost insurmountable one — or so it seems from some of the supplied official images. Not even a handsome Monegasque racing driver, Charles Leclerc (above), appears to make this impressive technical achievement look right on the wrist. It looks more like a gadget or a bracelet than a watch, perhaps. 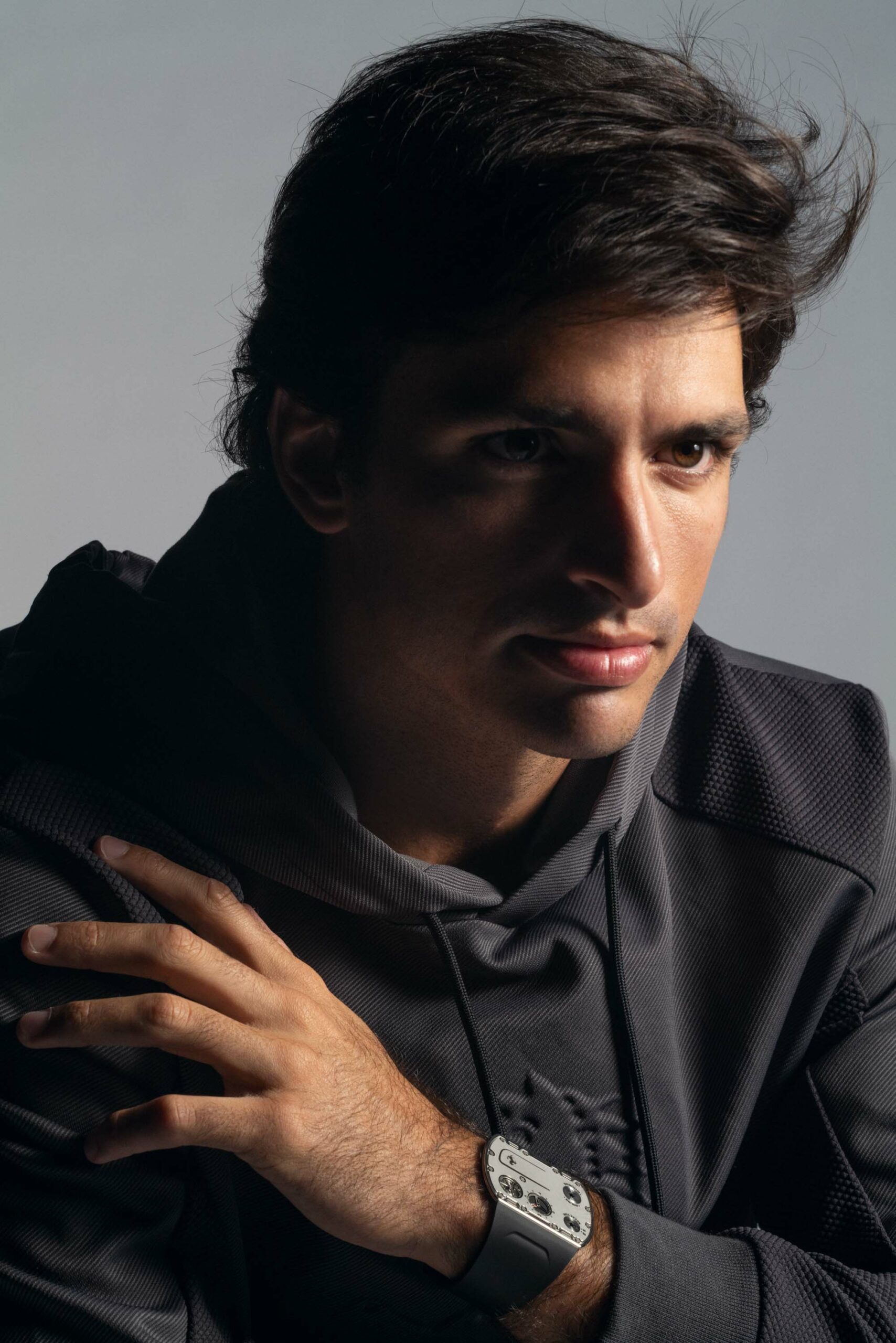 Another point of criticism can be the way Ferrari branding is used. Like it or not, Hublot set the bar to new heights and had, we thought, taught the world how to do a Ferrari partnership right. Hublot had migrated far away from the practice of slapping a prancing horse on products that would, without it, be exactly the same product in design and functionality. In other words, stylistic elements, materials and even close collaborations with the Ferrari Design Studio (their in-house design studio that actually designs Ferrari cars, not the Ferrari-branded aftershave) have found their way into Hublot watches at a wide range of price points. At this point, it’s hard to see how exactly is the Richard Mille RM UP-01 Ferrari a Ferrari watch, other than having that iconic logo placed in an otherwise unused space on the bezel and having Ferrari Formula 1 drivers model the piece for photos. 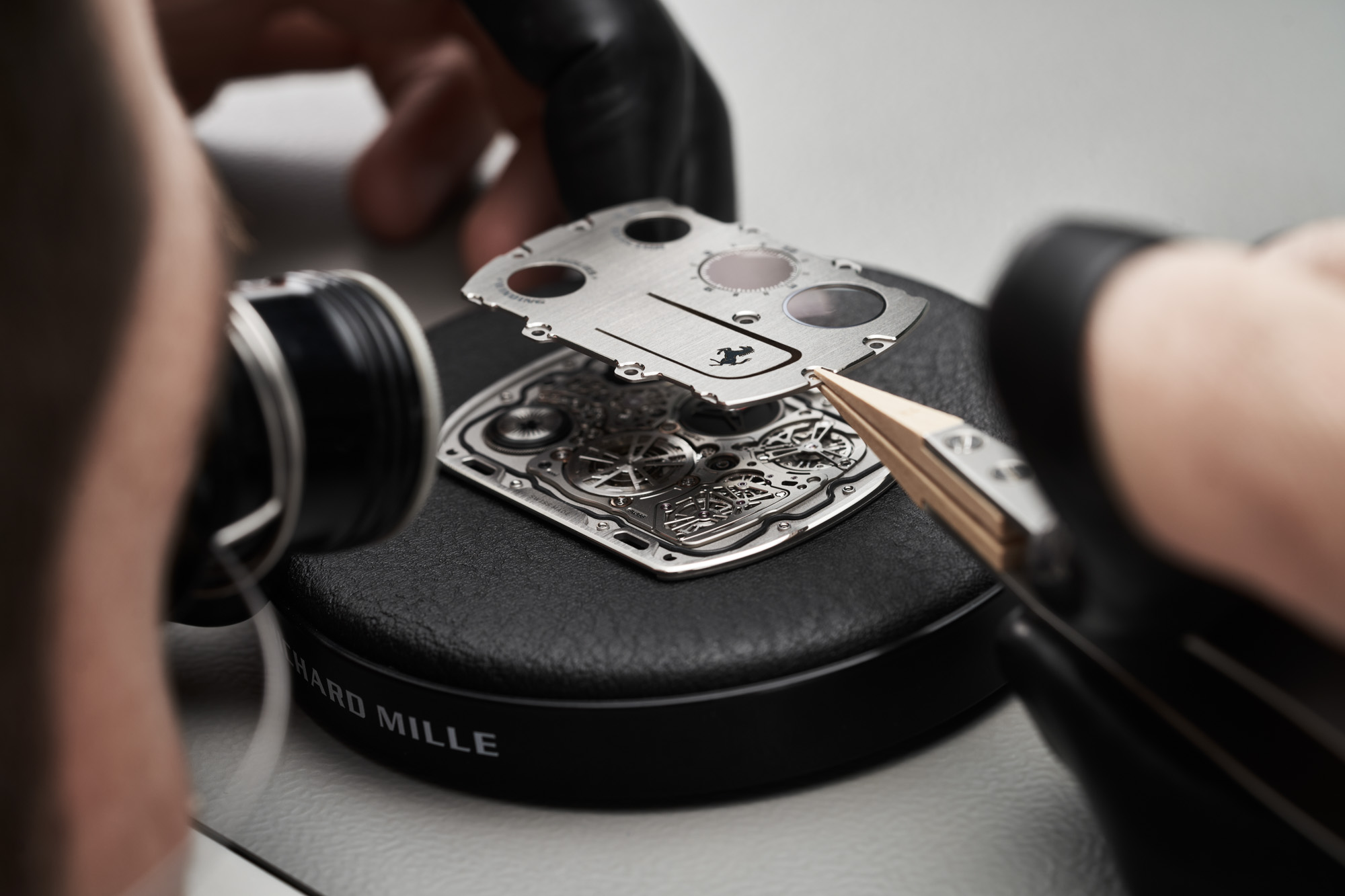 At the end of the day, the RM UP-01 Ferrari is a new world record in ultra-thin mechanical horology, and that’s good for the brand and great for the image of watchmaking. It indicates vibrance, energy and dedication and it deserves to be applauded for that. The co-branding and real-world wearability are debatable, but for such an exercise in ultra-high-end horology, the brand only needs to please a lucky few, anyway. The official retail price for the Richard Mille RM UP-01 Ferrari will be be $1,888,000 USD — or, as we said, more than $1,000 for every micron of its thickness. The RM UP-01 is a limited edition watch, with production capped at 150 pieces worldwide. For more information, please visit the brand’s website.