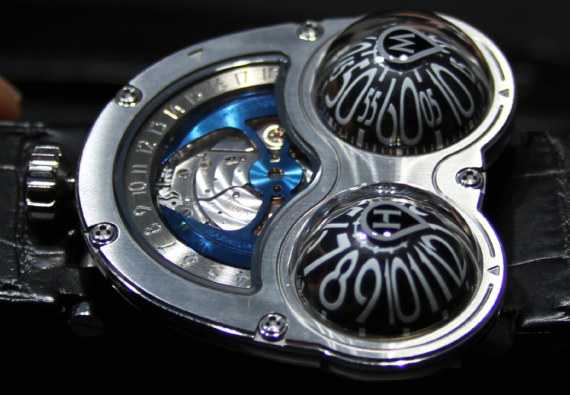 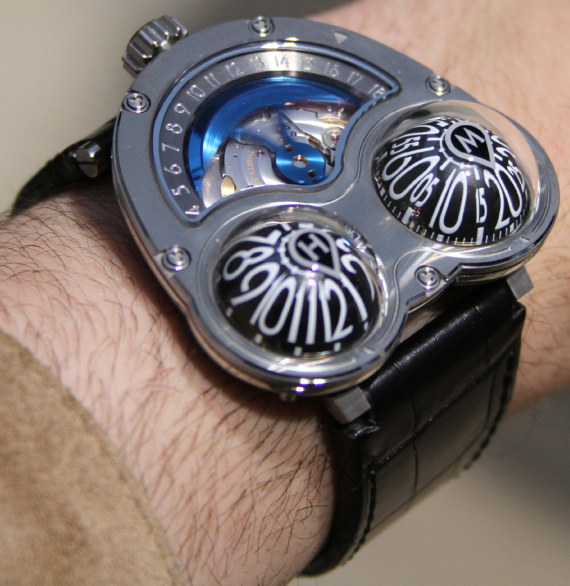 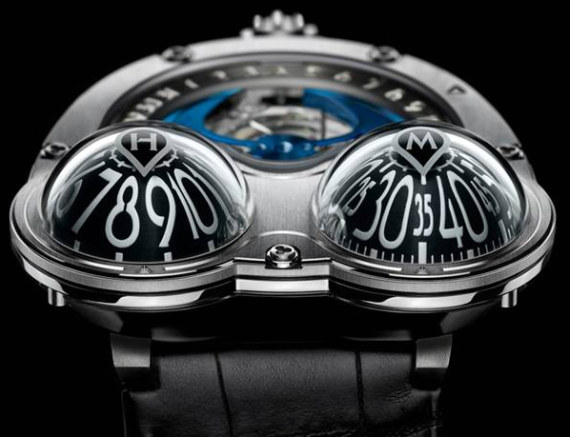 “Ribbit…” Here is the first derivative watch based on the MB&F Horological Machine # 3 (HM3) (which I wrote about here). While MB&F releases about one brand new watch each year, they also have special models based on their standard collection of Horological Machines. This watch will be known as the MB&F HM3 “The Frog.” There are two versions of the watch – one in a darker, PVD black coated titanium with a green toned 22k gold automatic rotor (12 pieces), and a titanum version with a blue 22k gold automatic rotor (20 pieces). That is a total of 32 HM3 Frog watches in total. Both look pretty interesting, with this bug-eyed (I mean amphibian) eyed watch having no analogs in the watch world.

Why the “Frog?” According the MB&F one of their customers said the two dome-like structures on the original HM3 looked like frog’s eyes sticking out of water – as frogs enjoy being in water with their eyes exposed to look for prey. If you read my above article you’ll see that while I agree the domes looked like eyes, they are more like robot eyes. So MB&F liked the idea enough that they wanted to make a watch that truly indulged this frog fantasy. The project was much more complicated than simple changing the domes which are used for the time (one for hours, the other for the minutes). The problem was that on the original HM3 the hour dome turned once each 24 hours, but the design of The Frog called for it to turn once each 12 hours. This apparently was cause for lots of movement changes. Plus, the domes are heavier and mounted much differently. The dome “eyes” are under a perfect dome of sapphire crystal in all black and white colors. There is a tear drop shape on the top (inside the crystal) that indicates whether the dome is used for the minutes or hours. The pointed tip of the tear drop indicates where you look to read the minutes or hours. 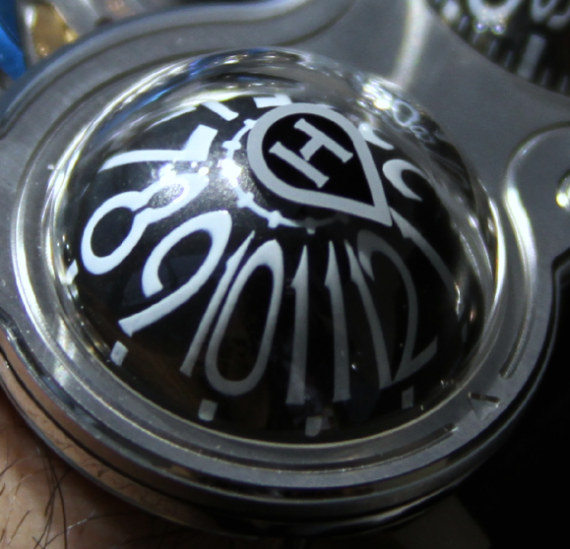 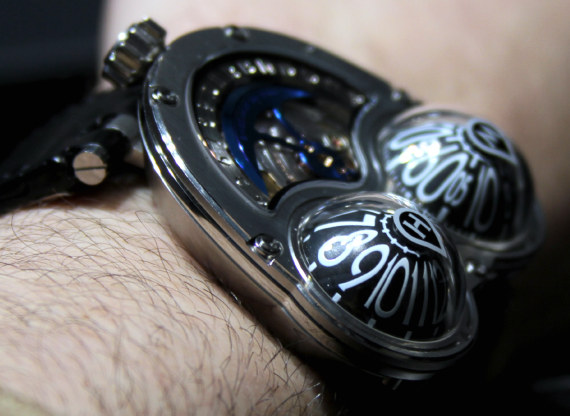 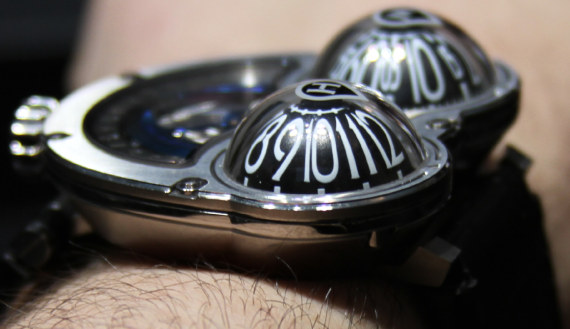 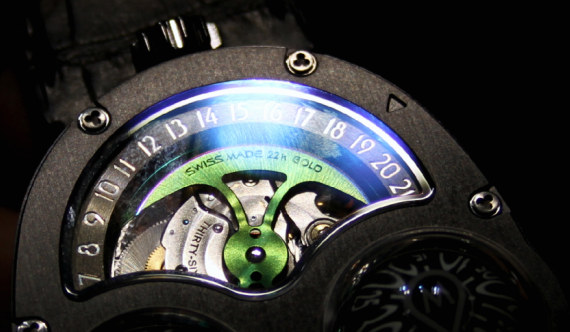 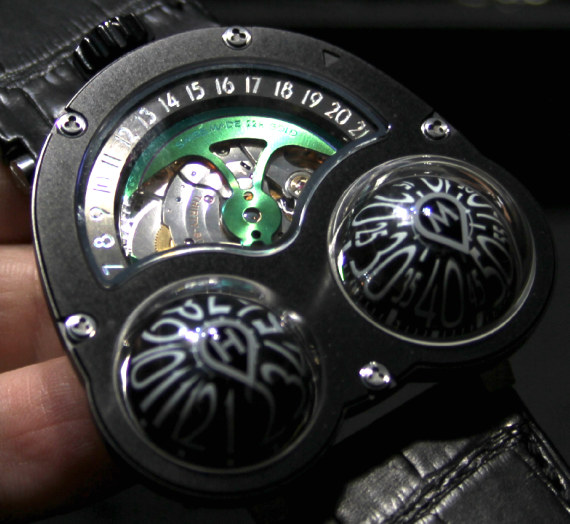 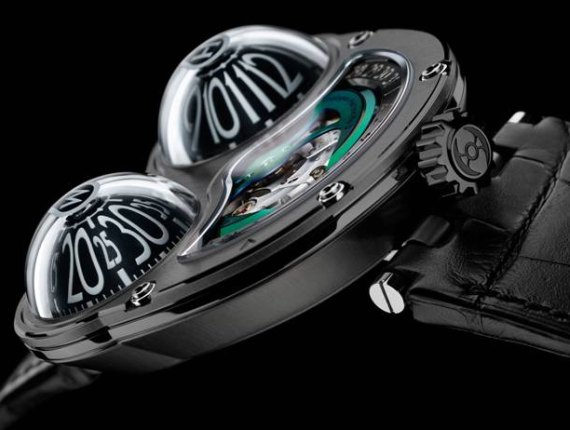 Some people will love the beauty and imagination of the watch. Others will consider the design perhaps a bit frightening. Large creature like bulging eyes coming out of a mechanical metal instrument in luxury materials. It is a weird watch of course – probably the weirdest looking piece to come from MB&F yet, and that is actually saying a lot.

Unlike the two versions of the original HM3 (the Sidewinder and Starcruiser), which had straps attached to them in two orientations, The Frog has one orientation, that probably suits the design best. You can piece the movement through the top and bottom mounted sapphire crystals. You will also find a date display ring on the top of the watch as well. A small arrow on the case tells you were to read the date.

My opportunity to view the MB&F Frog watch was preliminary, so I don’t have all the details such as the price, though you will find tech specs from MB&F below. The HM3 Frog will be in a limited edition (like all MB&F watches), and will have initial inventory likely available in and around Singapore where MB&F watches are highly prized. Availability starts this month (May 2010). MB&F considers it a “wacky” version of the HM3, and 32 collectors I am sure will be delighted. Again, 20 pieces in polished titanium, and 12 pieces in black titanium. 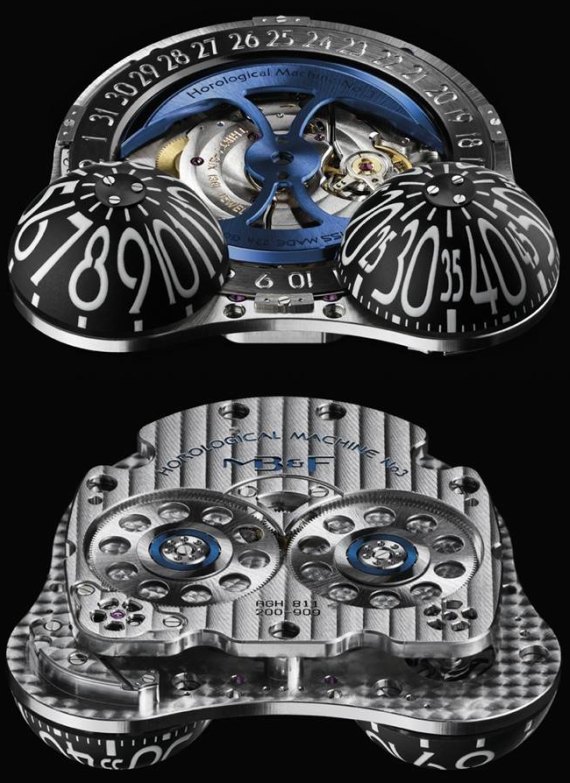 Sapphire crystals:
Domes and both display backs with anti-reflective treatment on both faces.
Domes for indications: in aluminium, 0.58g