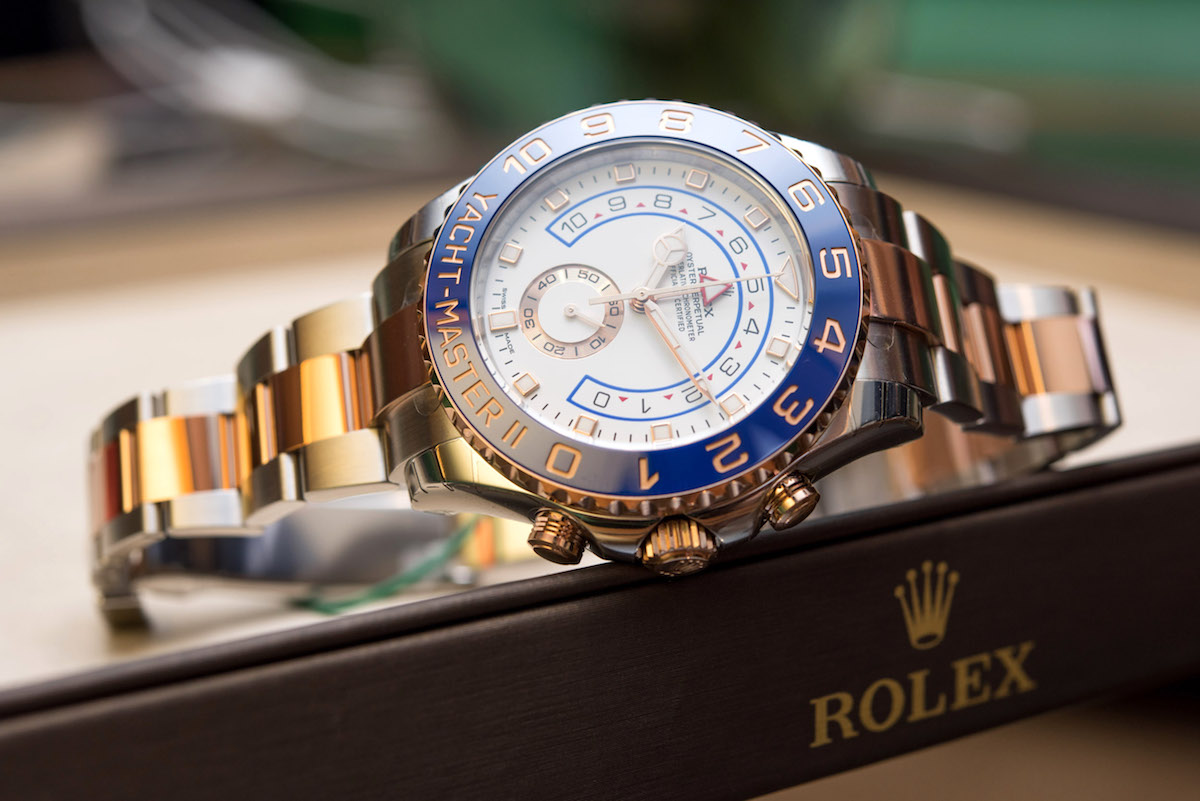 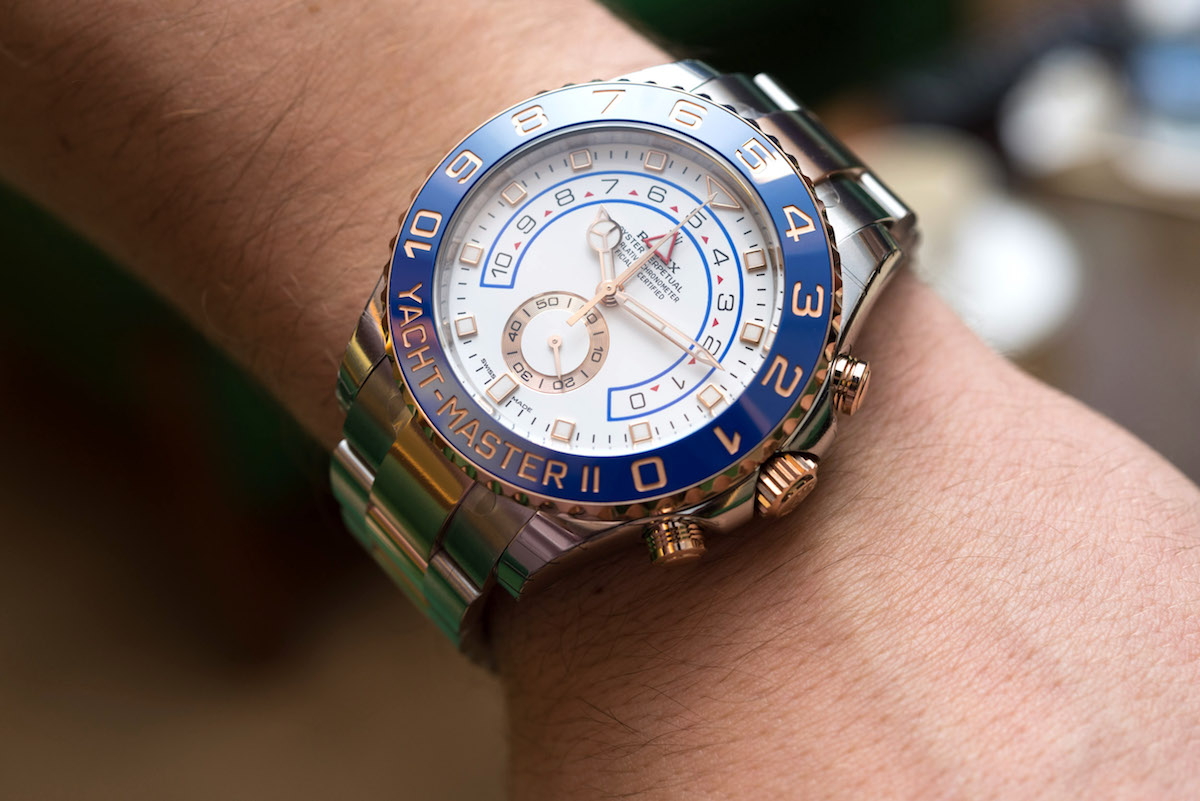 The year is 2011 and this conversation is overheard in a Rolex boutique. 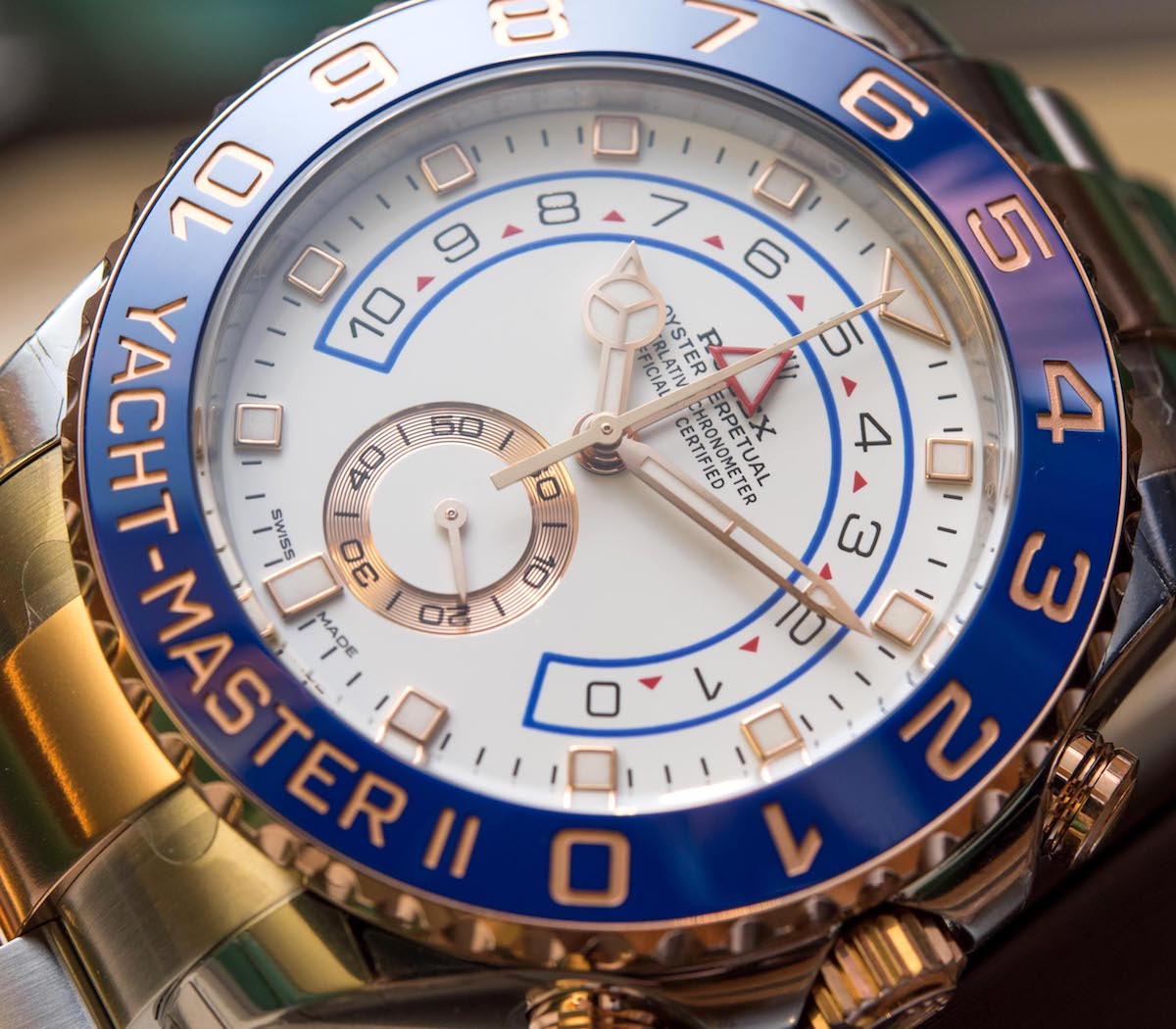 For the longest time, and I’ll take the blame for this, I couldn’t see the Yacht-Master II as nothing more than The Large Rolex. The 44mm wide Yacht-Master II was the go-to large Rolex, with a massive gap in size between it and the 40mm Sea-Dwellers, Submariners, and others. Debuted in 2007, the Yacht-Master II was followed just next year by the absolutely massive Deepsea that had the same width at 44mm but was considerably thicker, so it both appeared and wore much, much larger than the YMII, placing it far off the map for most. 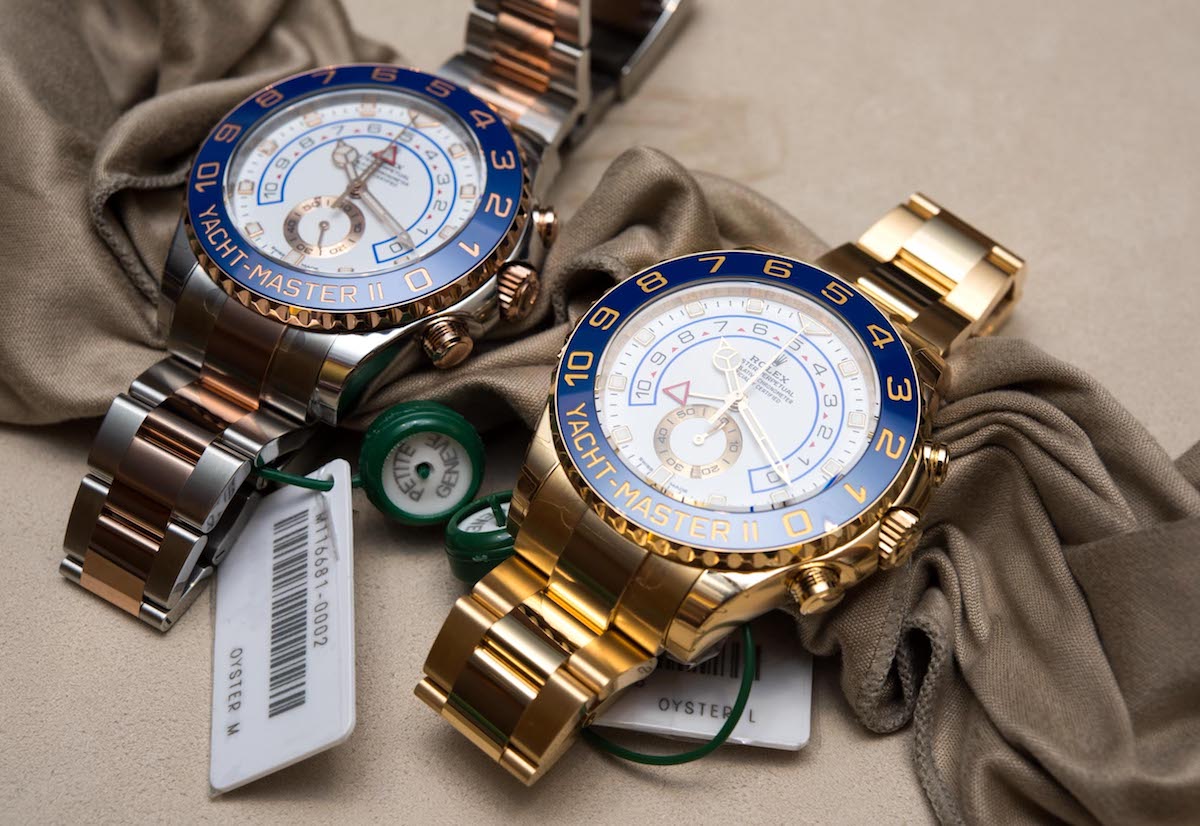 The Sky-Dweller made its debut in 2012, and while it also looks and wears large, until 2017 it was exclusively available in solid gold cases, rendering it about 40% more expensive than the two-tone YMII that had already been available by 2012. I did look these things up – wouldn’t want to pose as someone who remembers all this. No wonder then, that the Yacht-Master II became The Large Rolex worn by premiership footballers, celebrities, and… basically everyone who wanted in on the large watch craze with a Rolex, but didn’t like or couldn’t afford the Sky-Dweller. The fact that Rolex took so long and only debuted the larger, 43mm wide Sea-Dweller in 2017 is just Rolex being its usual cautious self that caused it to nearly miss the boat on the large watch trend – but that’s for another discussion. 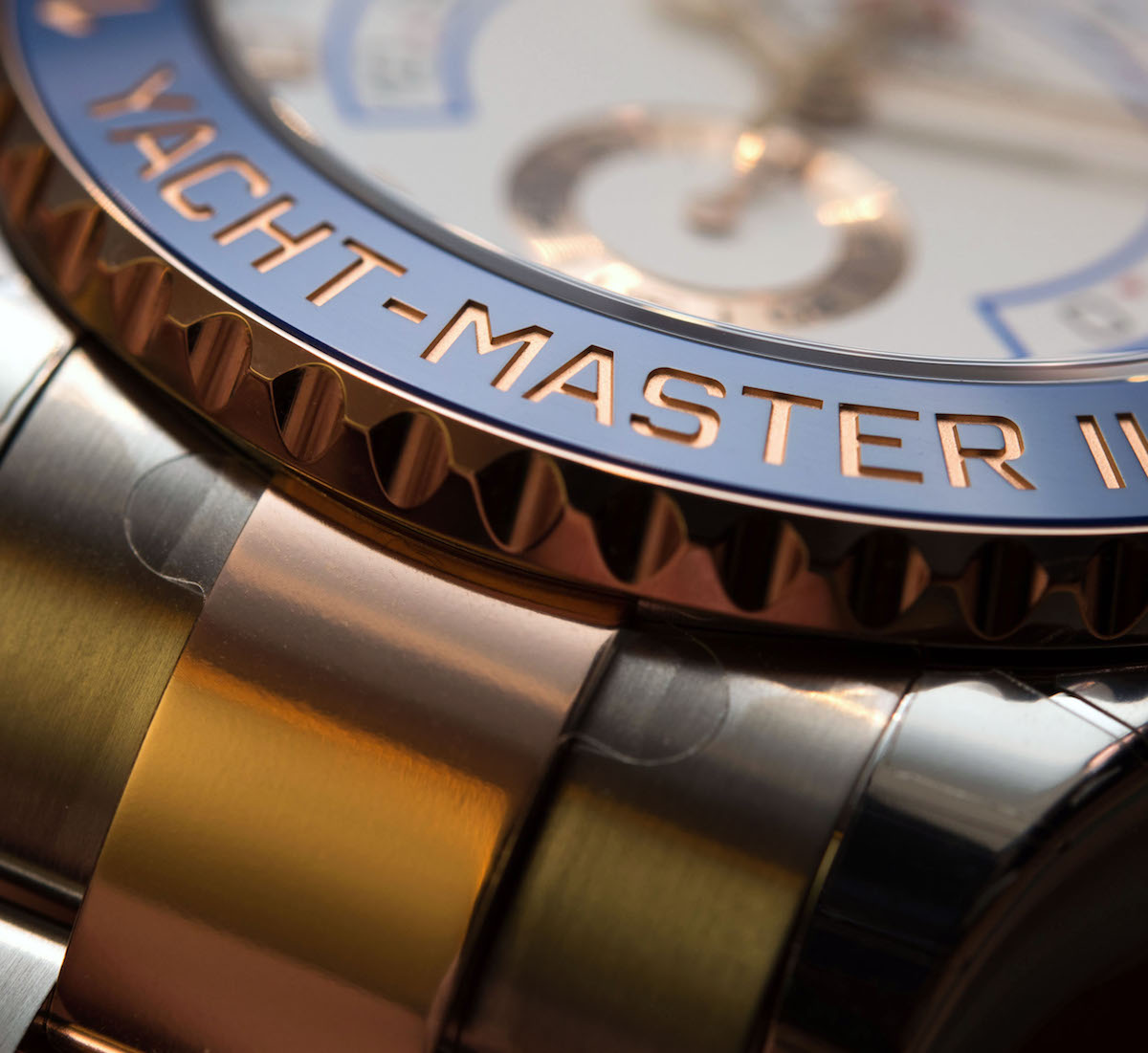 Stars aligned and I ended up in a Rolex boutique with a camera in one hand and the Yacht-Master II in the other – welcome to watch blogger life. It was only there that I realized I should have cared about the Yacht-Master II because my goodness, it is a truly impressive piece of watchmaking. It’s the Bentley of watches: big, brash, and showy, bought by a demographic that people not part of are keen not to be associated with… But beyond all that lies a deeply impressive, well-made, uniquely cool product. 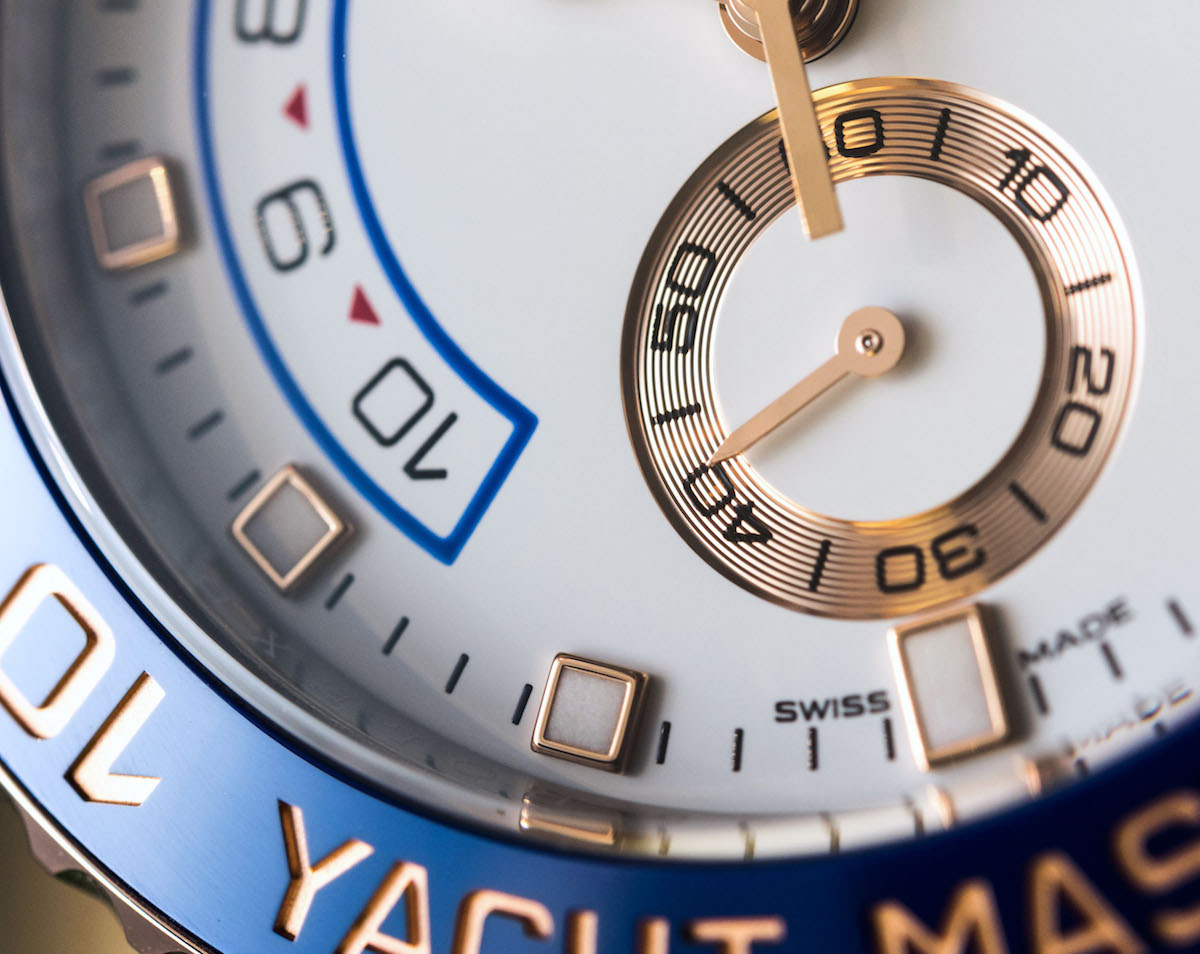 I am realizing now that it might as well just be my boredom with the Submariners and Datejusts speaking, but as I was reviewing my images on the spot on the camera’s screen (not even a larger, better display) I realized the many intricate and well-made details of the Yacht-Master II. It’s proper Rolex through and through – you’d never ever mistake the entire watch or any of its details for anything but a Rolex – but at the same time its functionality, layout, as well as its case and dial design are all refreshingly unique. 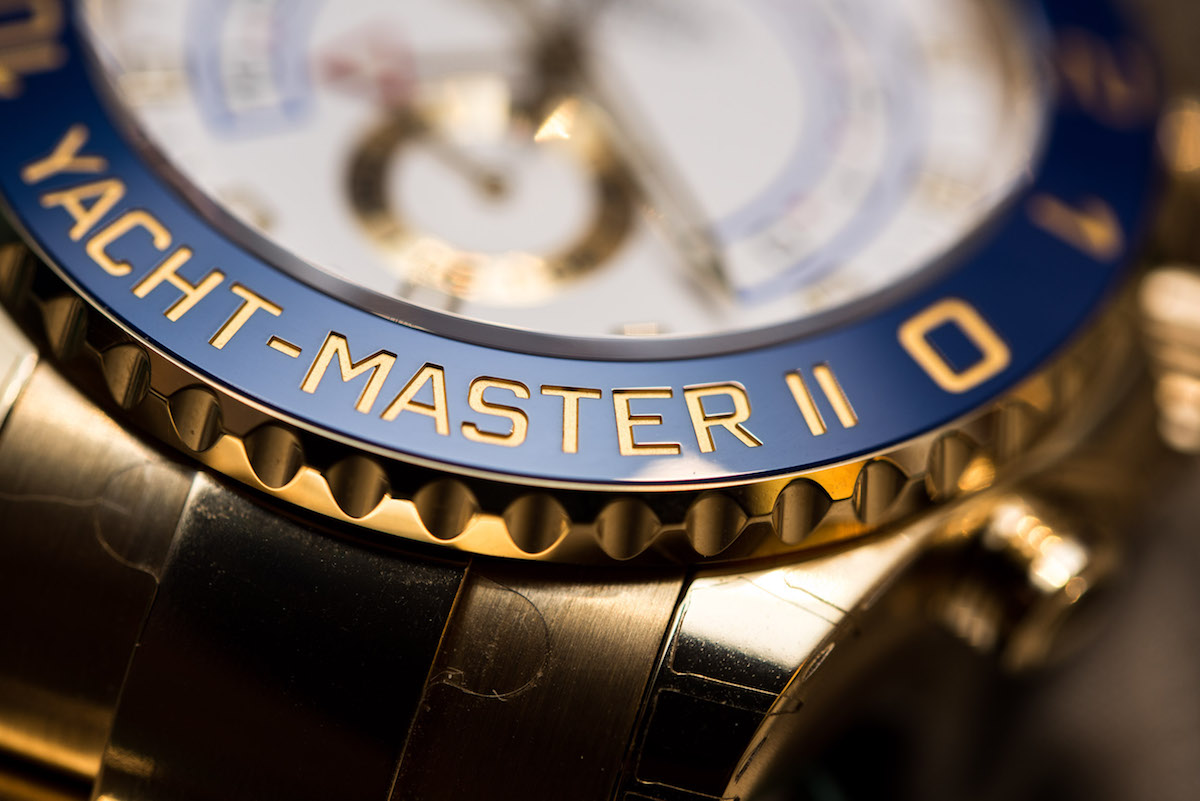 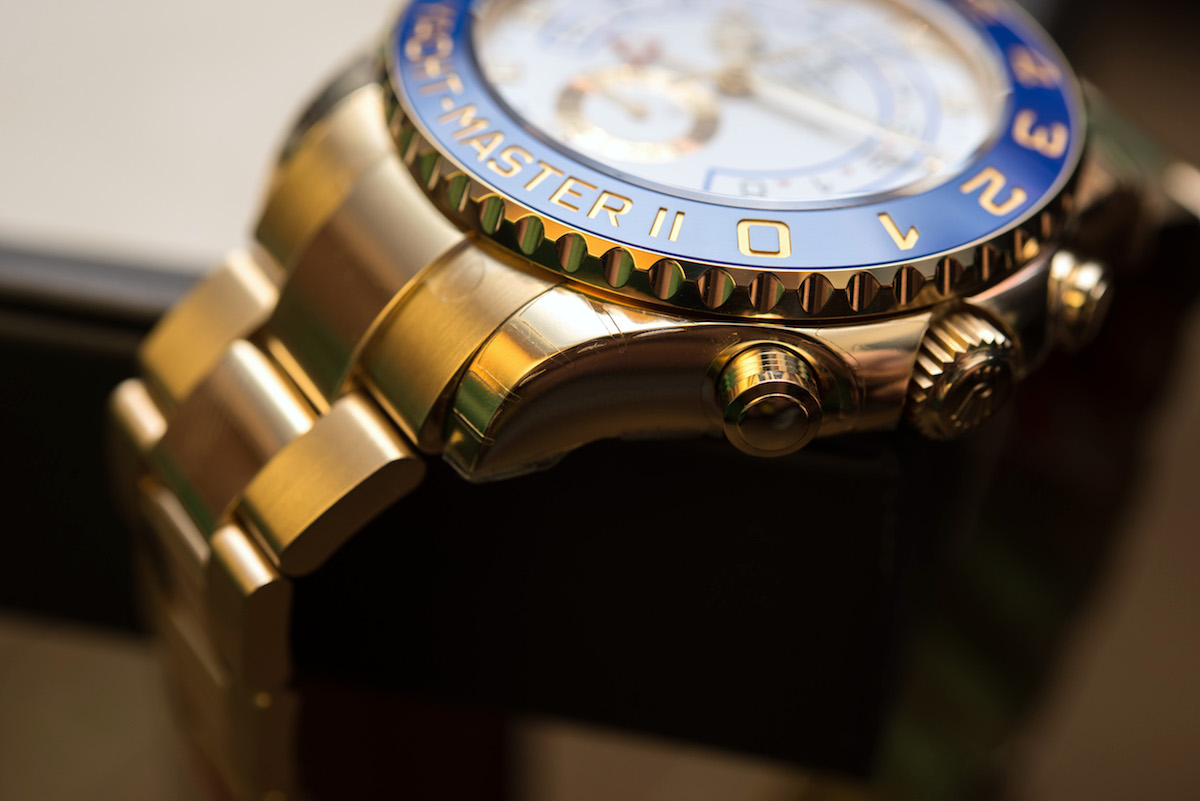 Yes, that’s what got me. The weird, piston-style pushers (that need not be screwed down), the weird, but strangely beautiful proportions of the lugs and bezel, the incredible quality of the blue ceramic bezel and its laser-etched, PVD-coated numerals, the weird arch of the dial that resembles (in my mind at least) a gauge of a submarine, and the ADD-curing tactile feel of the Ring Command bezel. These make the Yacht-Master II not only unlike any other Rolex, but unlike any other watch. How did this happen? 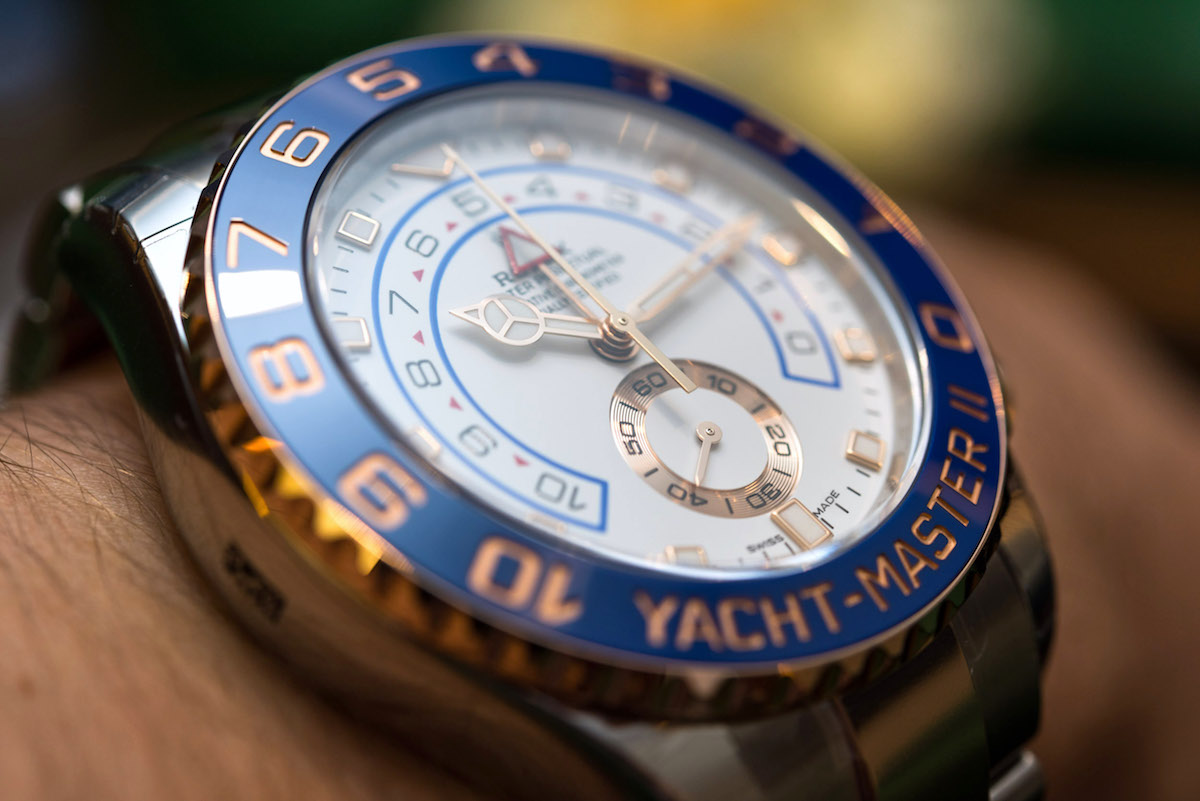 Whether or not Rolex had the large watch trend on its mind when designing the Yacht-Master II, we’ll never know. I have no hopes in receiving a definitive “yes, we did” or “no, we didn’t” answer from them. The Yacht-Master II was designed with a programmable fly-back regatta chronograph (ooooh, just writing that down felt strangely satisfying) and it was also the watch to debut Rolex’s Ring Command rotating bezel system that was later also used in the Sky-Dweller. 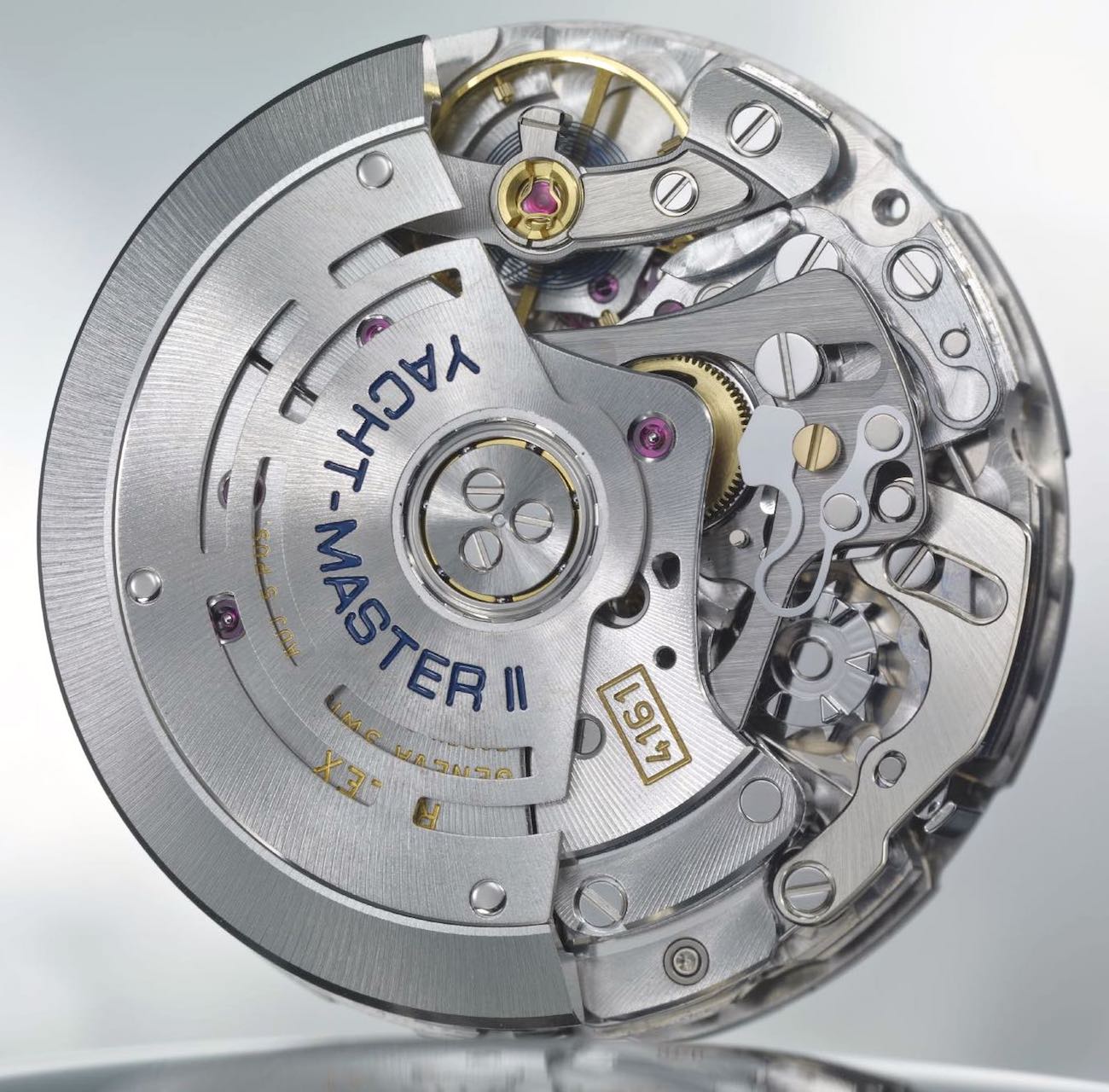 We’ll look at how it all works soon but for a second imagine the amount of R&D time and effort that must have gone into designing what is now called the Manufacture Rolex Calibre 4161 “with some 360 components.” What the heck, even Rolex appears to be proud of this movement as this, I believe, is the only movement they proactively communicate the exact component count of. It is known that the 4130 chronograph in the Daytona has 201 parts, but Rolex officially only ever said they managed to reduce the chronograph’s component count by 60%, without providing the total 201 count – and as far as the other movements are concerned, no exact component figure is ever shared.

Give or take the large watch trend, the Yacht-Master II is also something else: it’s Rolex’s love letter to one of its obscure, but long-standing passions, yachting. Worry not, I’ll spare you the long, teary-eyed story of all that’s exciting about yachting. That’s partly because I’ve never been on a racing yacht and partly because it’s irrelevant in this discussion – you either already are a skipper at heart, or if you’re not, my measly few words won’t get you started. Rolex has produced a number of longer videos on the topic, so if you can take 24 minutes of “uplifting-instrumental-music.mp3” and are desperate to learn more about yachting, then I suggest you watch the video above. But only then. 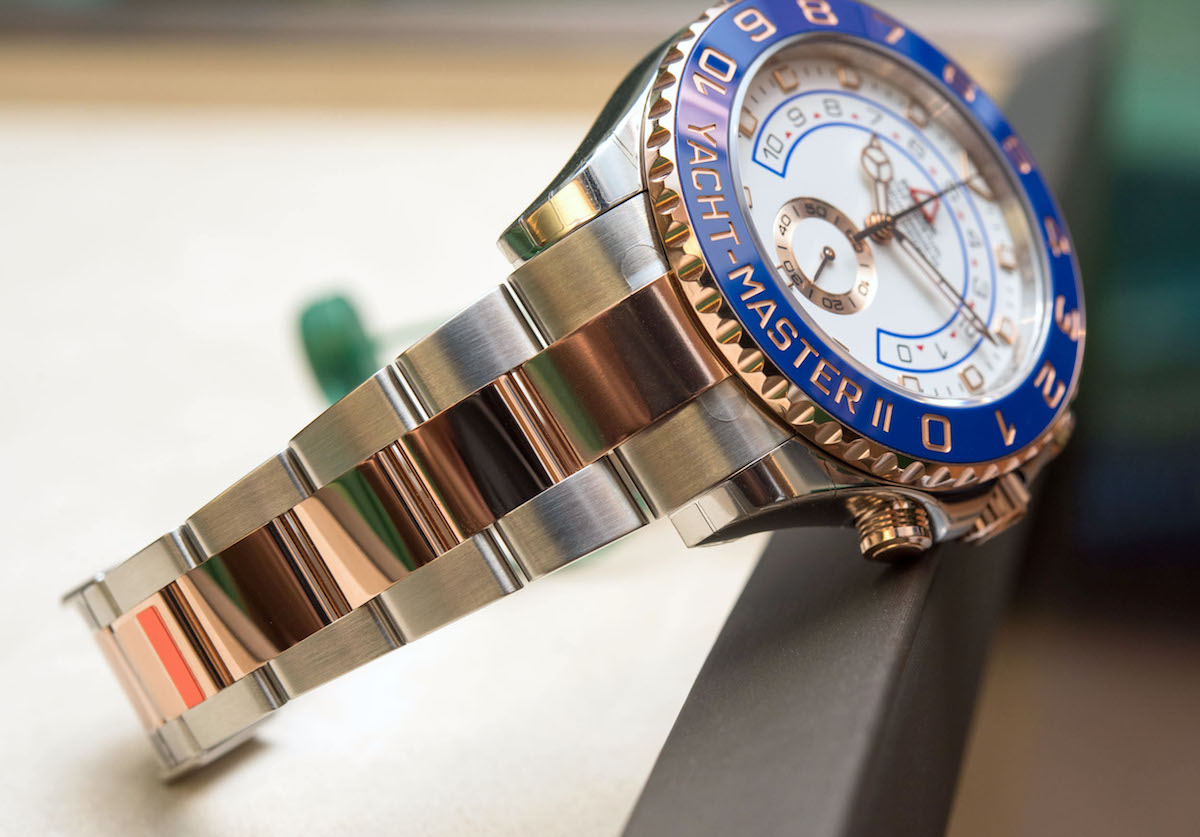 So, looking at it strictly as a watch, without its implications, customer base, or inspiration, what do we have with the Rolex Yacht-Master II? From my time with it, I came away with a new-found admiration for its many impressive feats starting with its mechanical engineering and ending with its countless neatly executed details. The Rolex Yacht-Master II was specifically designed for regatta yacht races where the starting procedure of the race requires each yacht to be positioned as best as possible when a given time limit expires. From what I understand this time limit before the actual start varies between 5 and 10 minutes and so skippers need a regatta timer watch with a countdown timer (i.e. a reverse chronograph) that can be programmed to count down from a pre-set time between 5 and 10 minutes. When the officials give a signal, the countdown begins, the pre-set regatta chronographs are started, and the maneuvering begins.