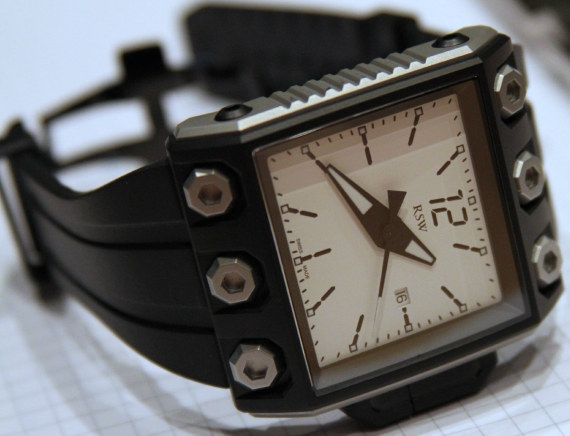 RSW is a brand I very much like. What makes me like it more is that most people  (even hardcore watch lovers) in the US have never heard of it. It isn’t that RSW isn’t distributed in the US, just that it isn’t distributed that much. RSW stands for “Rama Swiss Watch.” I have discussed them before, just not very recently. One of the things that makes the brand different is that they have an in-house designer. This isn’t actually all that common, as many many brands have in-house brand directional people. but design is largely outsourced to specialized watch designer firms. But I digress. Many RSW watches (for both men and women) are cool and quirky. I can’t claim to love them all, but I love their modern designer twist. I got really excited about the Outland 3H watch that is new for this year. I first wrote about it here on Luxist. 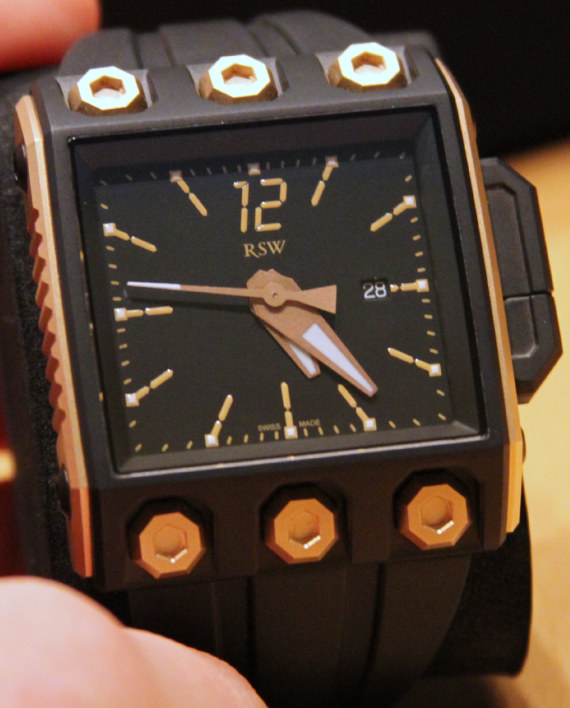 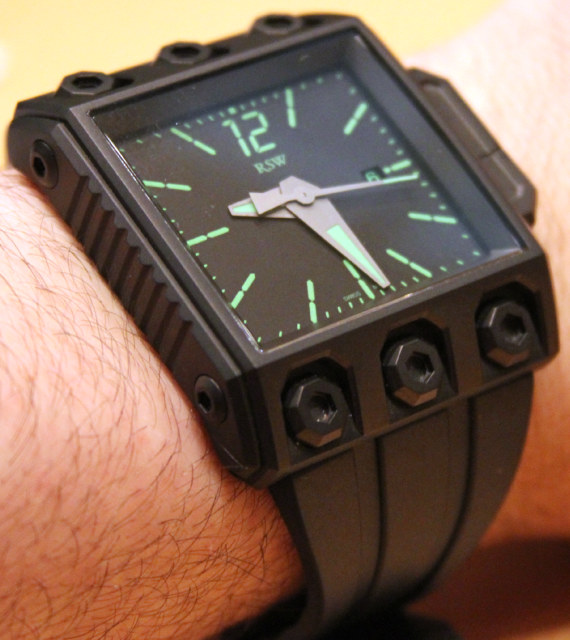 While at Basel I got to meet with RSW and check out the watches first-hand. You should know that the collection started life as the RSW Outland from a couple of years ago. You can see how the watches share the same case and strap. The Outland was a bit of a wild timepiece that was interesting all over and demanded attention. What it didn’t demand was too much of the avant garde market share. People liked the case more than the dial (which was interesting but certainly demanded an acquired taste). They also may have not been thrilled with the price. So while the Outland wasn’t a failure per se, it was more of a niche item. RSW had something special with the Outland case and wanted to have a more mainstream product. The disc based time-telling system has merged into a simple three-hand dial (why the watch is called the “3H” – for three hands), and it is being offered with a big variety of colors. I actually think there are too many color options to start. You can easily like so many of them that you won’t known which to buy if you like the watch – this often leads to people not buying anything. A condition known a “choice paralysis.” What RSW should do (and I told them), is release just a few colors at a time. Each 6 months to a year release some new colors to keep things fresh and lure potential buyers who have been hovering around the idea to buy. Again, I digress. RSW is really making my thoughts wander.

It would be wrong for me to suggest that the Outland 3H is the watch for everyone. “Drop everything, go out, and buy this new sensation!” Not a sentiment that applies here. Why? Because being a “different” type of watch RSW intends for a timepiece like this to appeal strongly to a few, and be quizzically starred at by the rest. Personally, I dig the watch a lot. It is a thoroughly modern looking timepiece with Swiss mechanical innards. A watch for the “why do we need a watch generation.” The case looks and feels like a gadget. A mechanical watch with the spirit of a digital clock. It is just the type of item that can help introduce a “watch oblivious” generation to the wonderful world of timepieces. I suspect that the tech friendly generation would be very open to a watch like the RSW Outland 3H watch if it was introduced to them properly. 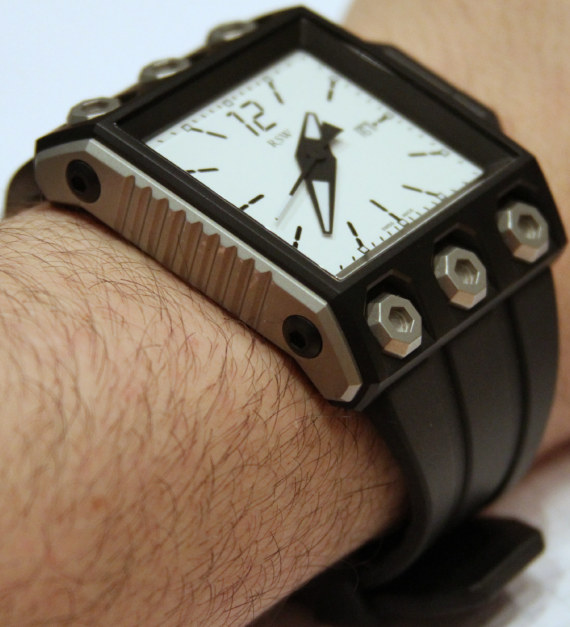 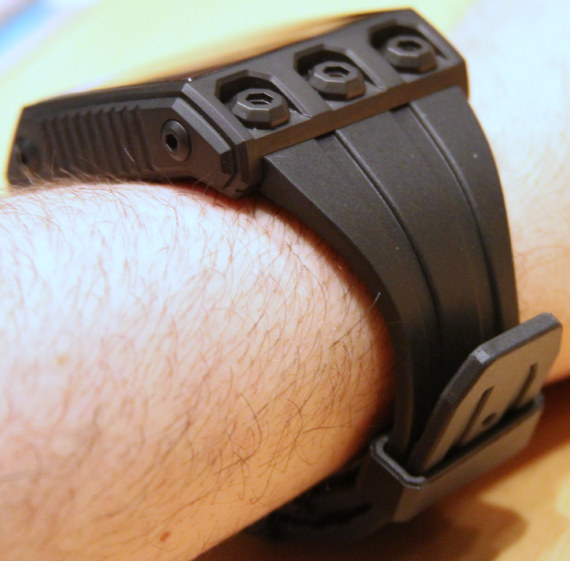 None of that is to say that the watch has nothing for seasoned watch lovers. Anything but. This is no cheap trendy timepiece. RSW is a good watch maker and the Outland 3H represents that. The finish and quality of the watch are quite good, and the piece is as ergonomic as it is “fresh.” Let’s start by looking at the case. Large and square with bent ends that serve as lugs. The case is 44mm wide in steel with black PVD, and various version with either sand-blasted steel or rose gold mixed with the black. The lug sections each have a row of three large hex bolts that look strong and masculine. They are matched by three more under the watch. There are other screws all over the case, though not so many as to look cluttered. The industrial design of the watch is cosmetic, but feels rugged. It also helps gives the piece a very modern and aggressive look. The design idea seems to be that “watches in the future are more functional than decorative.”

I tend to prefer the version that have black mixed with steel. These help bring out the design of the case best. This also works for the gold versions. On the rear of the watch is a vertical slit that is RSW’s version of a sapphire exhibition caseback window – where you can see the Swiss ETA automatic 2824-2 movement inside the watch. You might be asking yourself “what is up with that crown?” RSW likes to use their proprietary fold out winch style crown. The mechanism literally fold out for winding, and then can be pulled out for adjusting the watch. It would be a bit of a pain with a manually wound watch, but it is really fun to have. My apologies for not thinking to take a picture of the folded out crown. 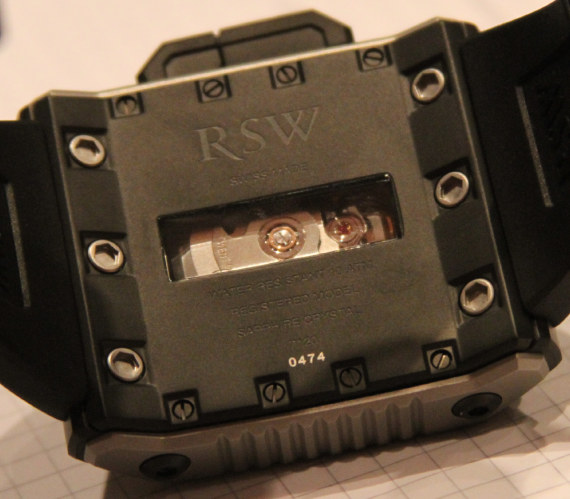 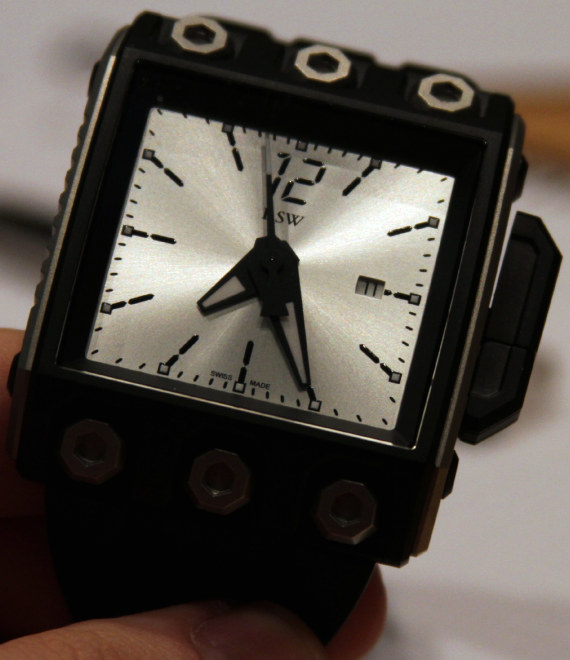 Like I said, you will recognize the design elements including the Arabic numeral “12” and hour marker styles from digital clocks. Without being a cheesy homage to he 1980’s, RSW was able to incorporate a vintage style looking dial on a modern watch, and do it well. The large hands are very easy to read, and taken from another RSW piece known simply as the Diving Tool Watch. The dial is also enhanced by SuperLumiNova luminant. In addition to a few case style choices, there are a number of dial choices. Black with a variety of hand and numeral colors (such as green, yellow, red, white), and with a white dial or silvered dial. RSW is pretty much just having a fun time offering a number of colorful options. Who knows what will sell the best, they all look pretty neat depending on your taste.

Price for these watches is likely a couple thousand dollars. Not too much more than that I am sure. For that price they are indeed a splurge for most of the people in my mind that will like them here in the US, but not something that is so expensive you just scoff and shake your head. Any understanding of the Swiss watch market will rather easily justify these prices. While the RSW Outland 3H isn’t a watch revolution, it is a fresh look, with a mind for a market that largely ignores watches but shouldn’t. How to capture ‘generation .com’ isn’t clear, but doing so with cheeky watches that look like what your uncle wore back in 1979 isn’t necessarily the best way of going about it. At the same time, the Outland 3H is nifty watch novelty that should speak nicely to enough people. Look for it soon.