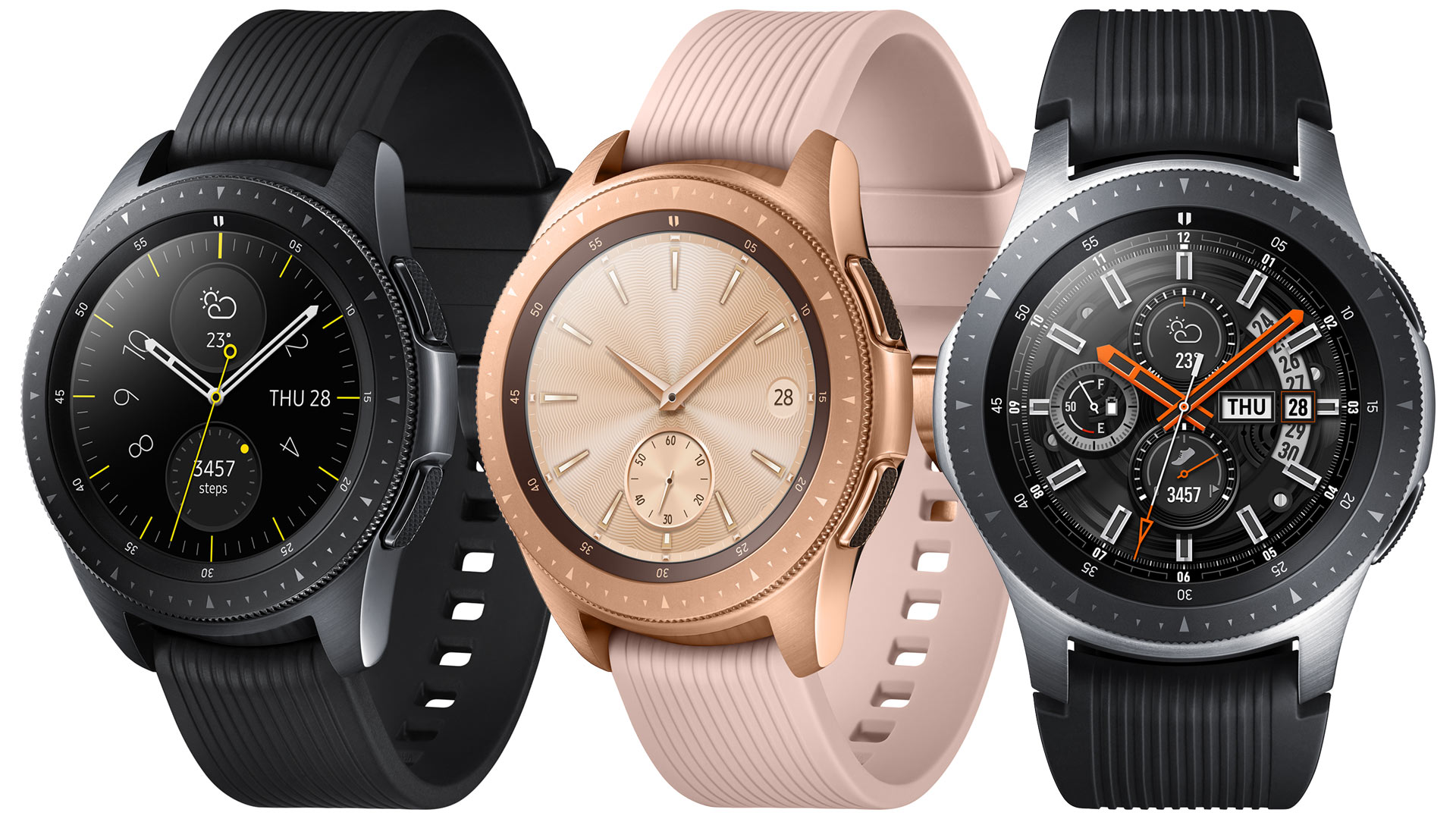 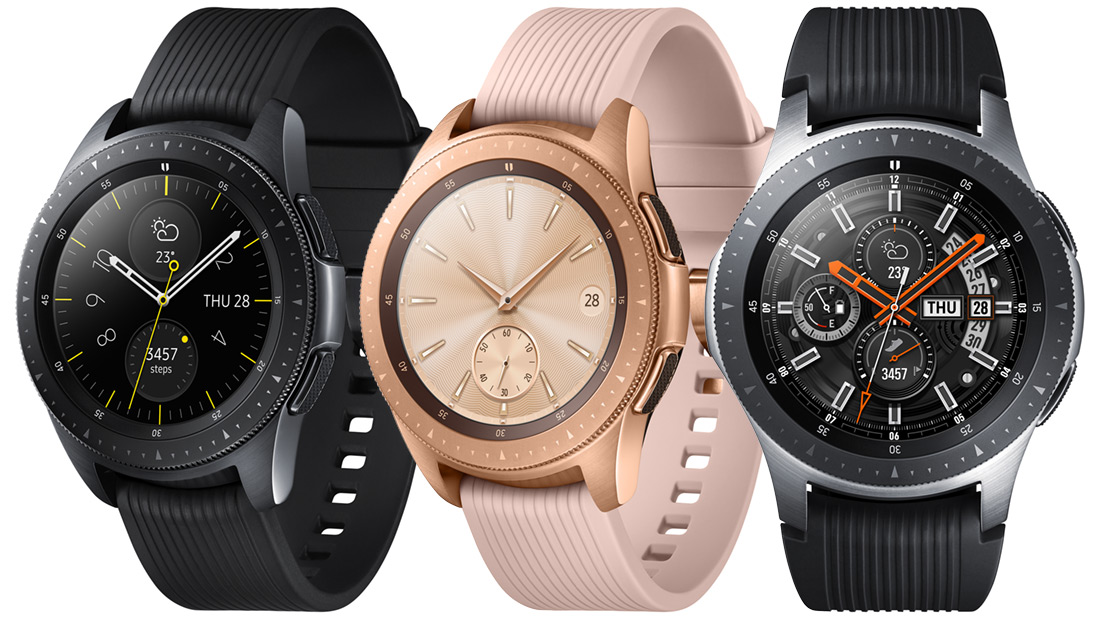 Yup, Samsung is renaming its smartwatch again. It started off in 2013 as the Galaxy Gear, which later became the Gear and Gear S. Now, it is the Galaxy Watch. Call it whatever you want. These smartwatches have always packed the biggest dose of cutting edge smartphone-like features and boasted some of the relatively stronger constructions. The last version, the Gear S3, had a case crafted from 316L stainless steel, no less. Now, the Samsung Galaxy Watch is here and, Samsung say, it’s supposed to be “The new definition of authenticity.” A full review is coming, but let us familiarize ourselves with all the specs, important details and pricing, and a bit of my take on the Galaxy Watch. 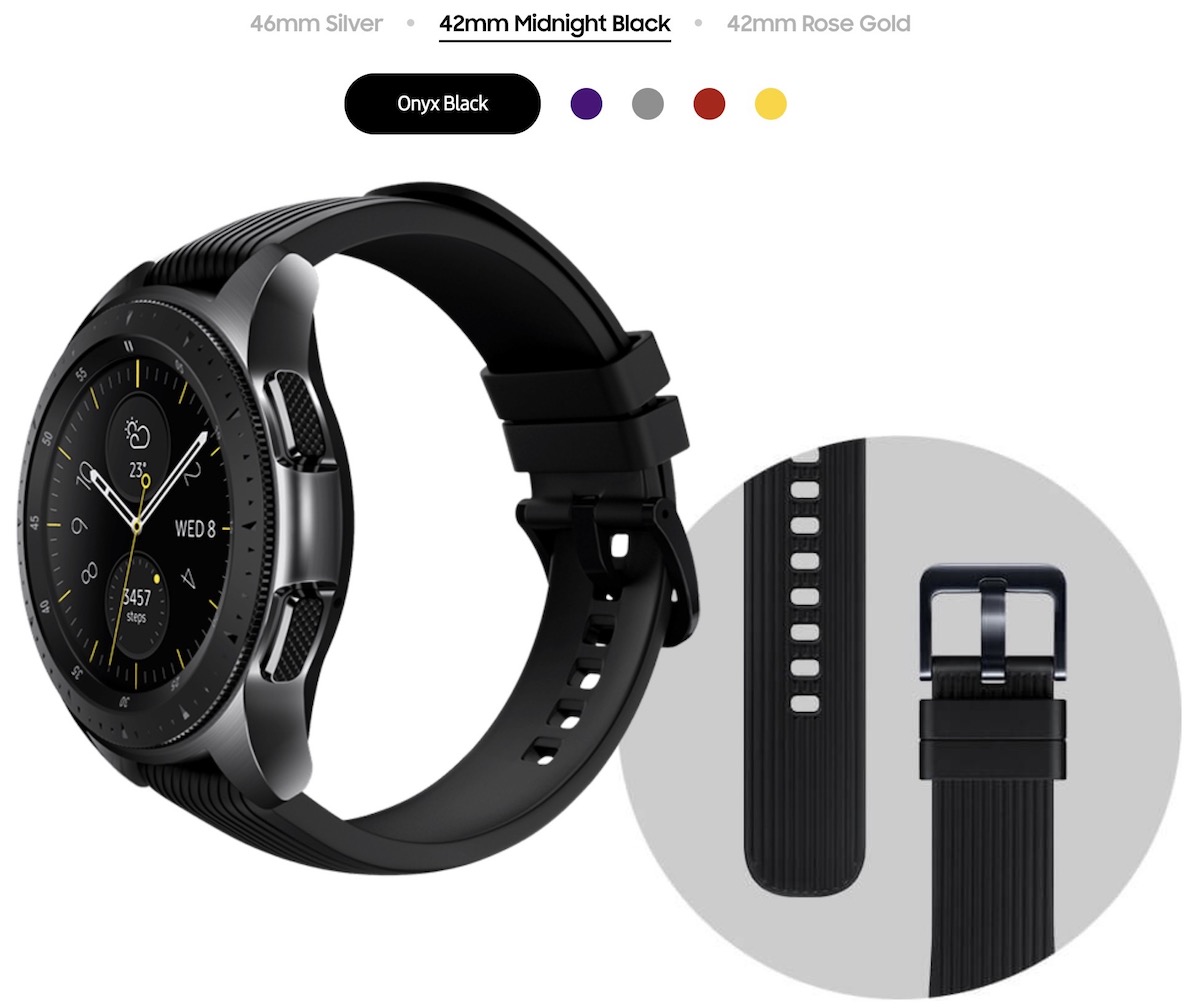 First, the dry specs. The new Galaxy Watch is available in 46mm wide and 42mm wide cases, both coming in at a rather wearable 13mm thick. The 46mm version only comes in Silver (that’s with a capital “S,” mind you), where the 42mm variant will come in Midnight Black and Rose Gold. You can put a “Midnight Black” Galaxy Watch on an “Onyx Black” strap – just thought you’d want to know. At a time when most watch brands are toning down in sizing and when so many have remarked that the 46mm case of the Gear S3 was simply too large for them to wear, Samsung launching a smaller option implies that wearability – and consequent marketability – does matter to the company. Credit where it’s due, the Note 9 also implies that Samsung is listening – with its repositioned finger print sensor, thicker build to feature a larger battery (a trade-off that apparently more than a handful of users and reviewers asked for), and more storage with expandability. We’re getting sidetracked here; the point is that we are trying to decide whether we can believe our eyes and see a major brand make notable changes in response to customer demands. 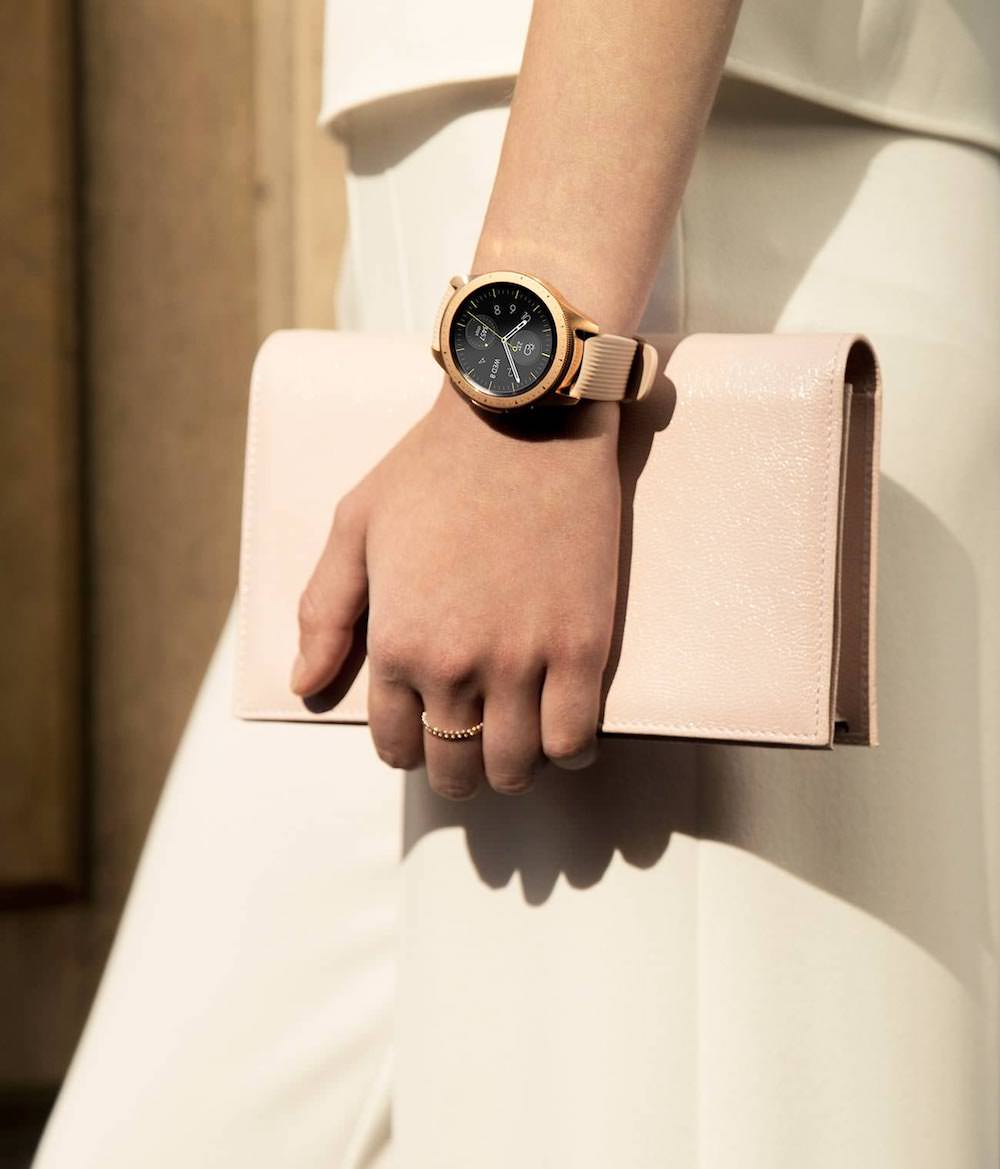 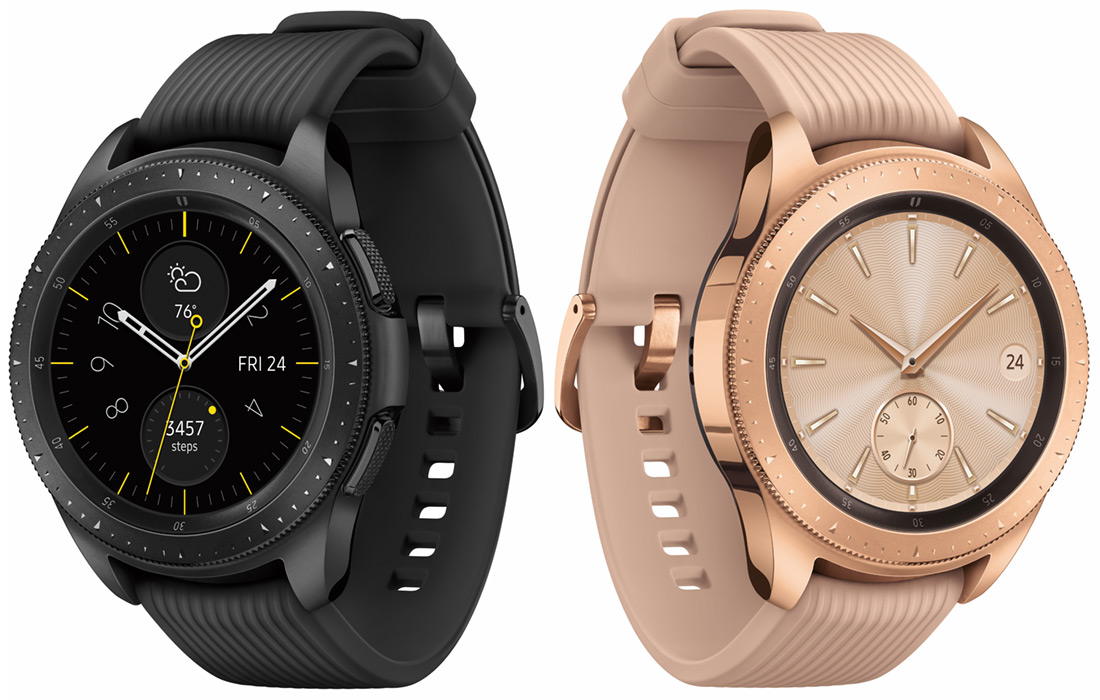 The cases are metal, coated or otherwise, although Samsung is yet to specify – the Gear S3 was 316L stainless steel, like quality “regular” watches are. Exact dimensions are 46 x 49 x 13 millimeters for the 46mm version and 41.9 x 45.7 x 12.7 millimeters for the Samsung Galaxy Watch 42mm. That’s well under 50mm lug-to-lug for the latter, meaning great wearability and a much nicer fit on narrower wrists. Weights are 63 and 49 grams respectively, without straps attached. Straps are easy to swap and the lugs are kept at industry standard 22 or 20 millimeters wide.

Durability is rated at 5 ATM (in Swiss maths that’s equivalent to 50m water resistance), although a much more meaningful specification is the Galaxy Watch’s IP68 rating, meaning the watches can be under water at a depth down to 1.5 meters for up to 30 minutes – wonder when the Swiss will embrace this rating system (we won’t be holding our breath). Add to this the MIL-STD-810G rating, which is a United States Military Standard for Environmental Engineering Considerations and Laboratory Tests – again, something Swiss watchmakers have never heard about. Just saying. 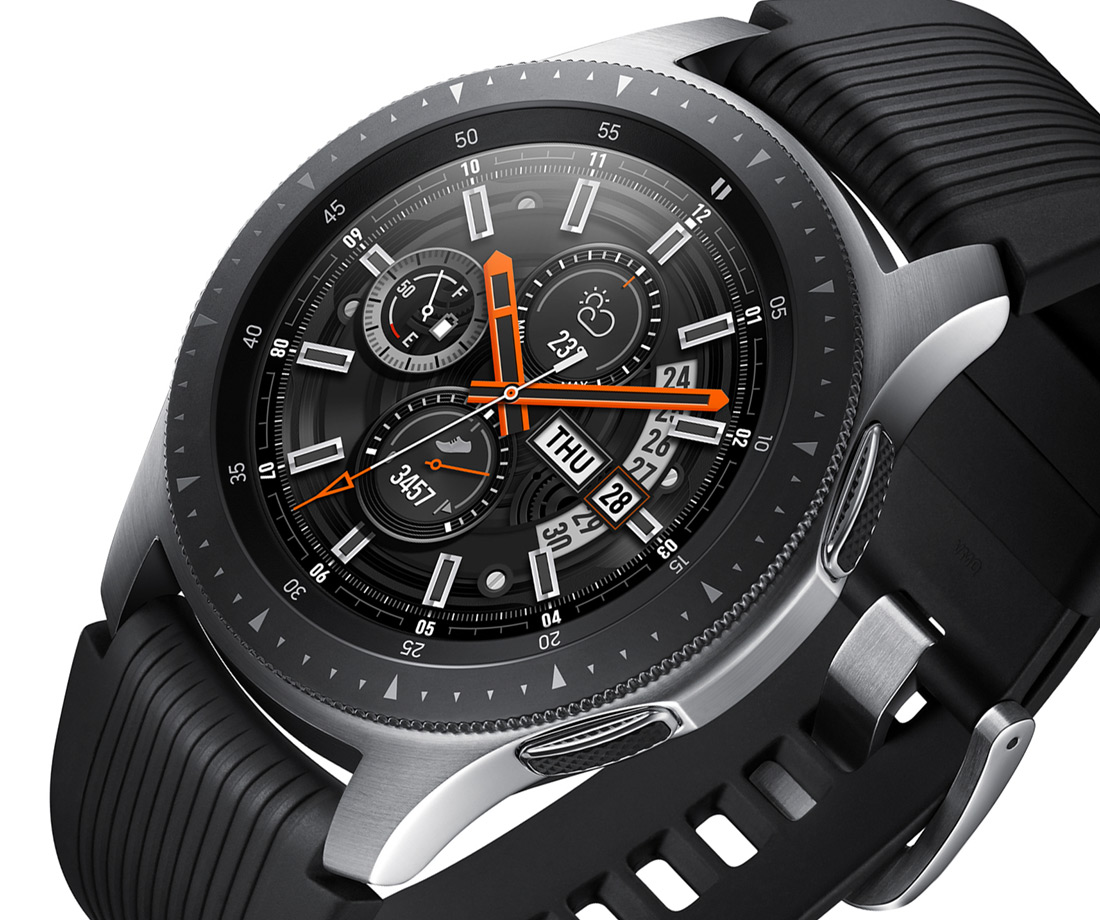 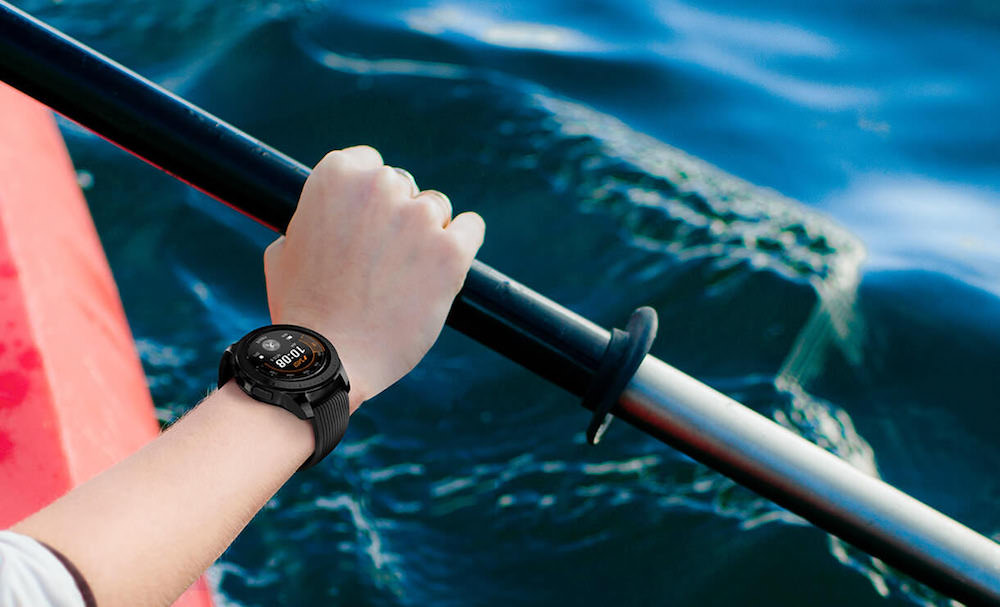 Actual use of the Samsung Galaxy Watch happens via the rotating bezel and a Back and a Home key, plus the touch screen functionality. The Tizen based “Wearable OS 4.0” is run by the 9110 Dual Core processor and is backed up by 1.5GB RAM and 4GB of internal memory in the LTE version, and half the RAM but the same amount of storage in the Bluetooth version. Connectivity includes 3G and LTE, Bluetooth 4.2, Wi-Fi, NFC (so you can use it for payments at stores), as well as A-GPS for location tracking on hikes or wherever. These are accompanied by accelerometer, gyro, barometer, heart rate monitor, and ambient light sensors. 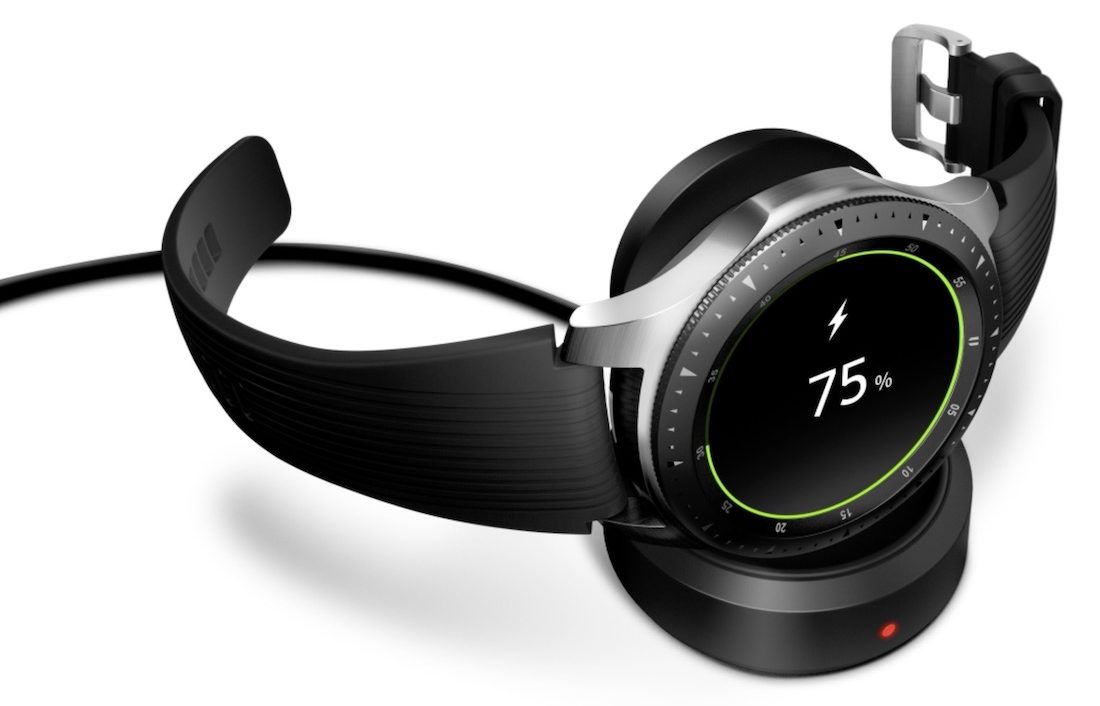 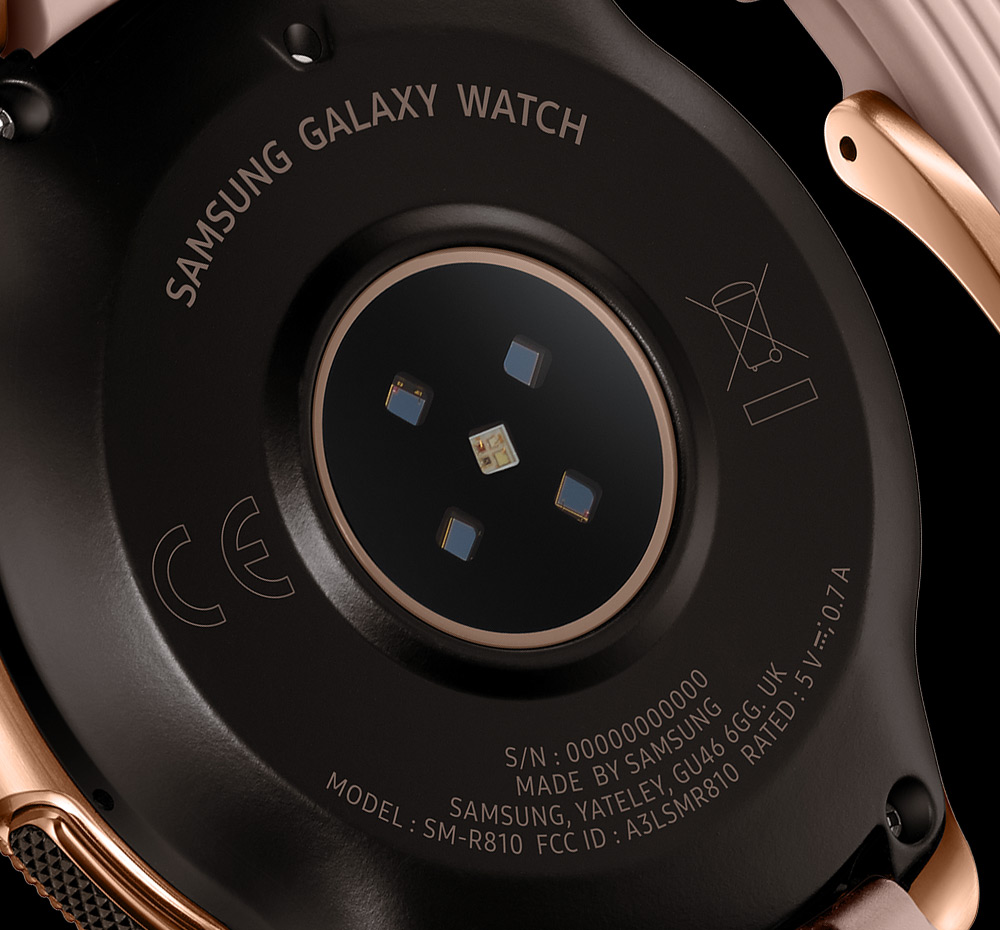 In terms of features and functions, expect the Galaxy Watch to be capable of doing all the usual smartwatch stuff. It can show notifications from your phone, track your heart rate and activities and even lack thereof, i.e. your sleep. And if you opt for the LTE version, you can even use it to take calls and send messages independent of your phone. 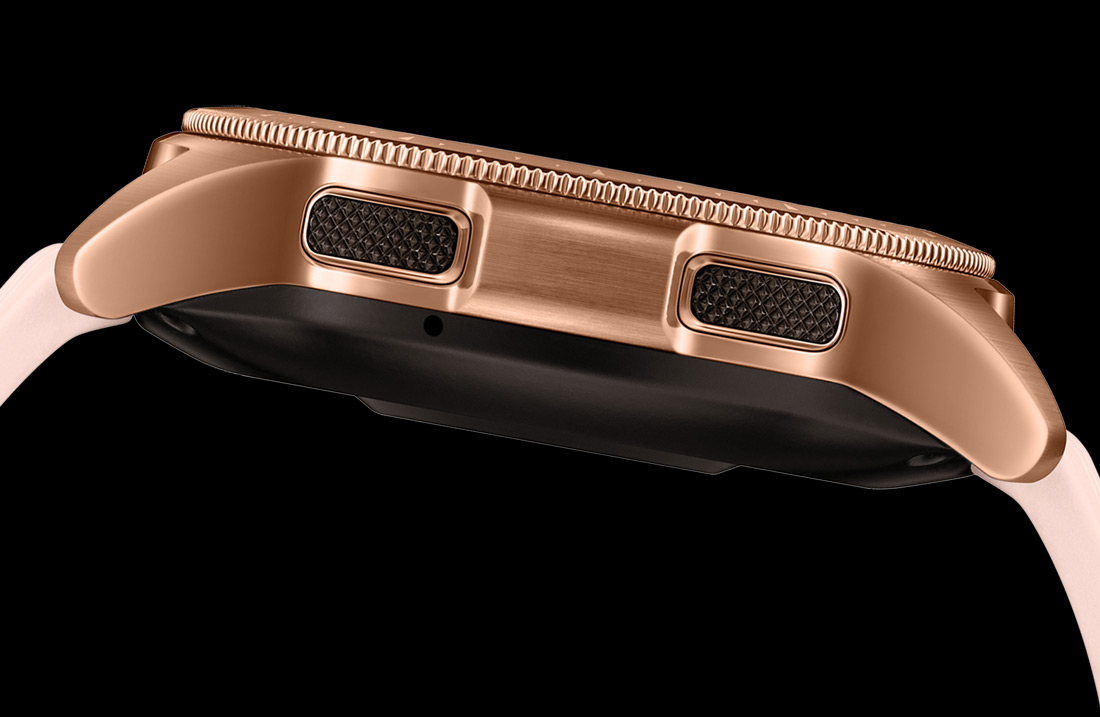 Now, as I mentioned in the intro, Samsung say that the Galaxy Watch is supposed to be “the new definition of authenticity. Match Galaxy Watch to your lifestyle with an authenticity you can see through a variety of watch faces and with depth and lighting effect. A round face, watch hand shadowing and ticking sound give it the feel of a real watch.” I guess a more complete, albeit less catchy phrase would have been “A new level of authenticity among smart watches” – but I don’t blame Samsung leaving it to the reader to figure this decidedly marketing-y statement wasn’t to address the Hitherto Known History Of Horology Ever. If all this translates into them adding shadows to the hands and making the watch tick-tock from its speakers – so be it. The Gear S3 would imitate reflections on its dials based on the wearer’s wrist movements it could determine with its gyro sensors – adding shadows to the hands sounds like a natural extension of that. I’m just happy it wasn’t me who had to program this into Tizen. 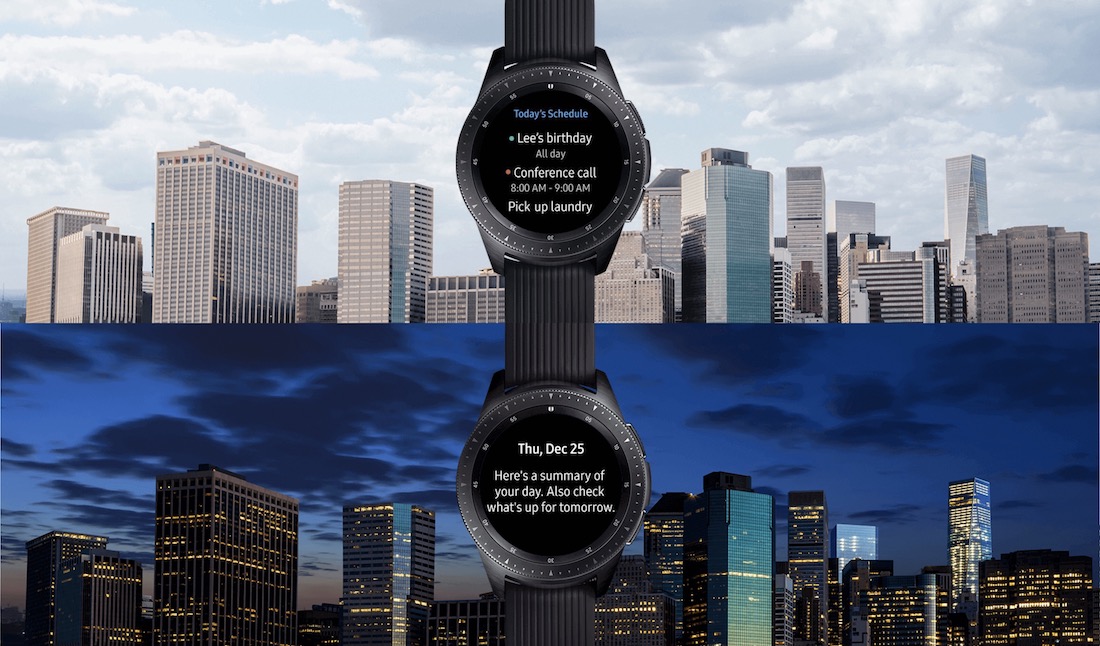 I am looking forward to seeing how some actually smart functionalities that Samsung boasts about fair in real life – like the watch giving me a morning briefing on the weather, the day’s schedule, reminders, and more when it senses that I woke up and doing the same for what’s up for tomorrow before going to bed at night along with a review of my day in terms health data recordings and stuff. Because what’s better than going to bed feeling bad about not having walked enough that day?

Battery life with the built-in GPS, barometer, and altimeter working at full speed, as well as the dependability of the durability claims plus the functionality of NFC payments, 3rd party apps, and so on we’ll have to check when we get to put the Galaxy Watch through our review phases… Until then, I’ll go to bed with tomorrow’s schedule in my head and not on my wrist – though said schedule is now being oppressed by the awareness of a smartwatch that tick-tocks and imitates shadows on its hands. I mean, that’s kind of… cool..? I guess? 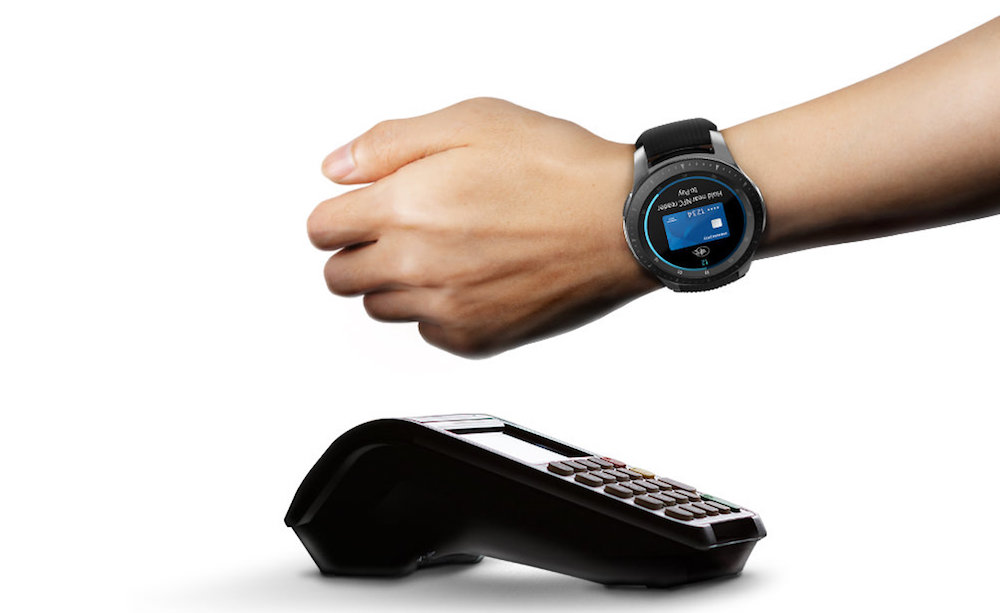 Long story short, although I’m no smartwatch wearer just yet, I find myself excited about the smaller and larger improvements that the giants of the tech world introduce to these products and about seeing where they think these should be taken to gain yet greater popularity for “wrist computers.” Apparently, for Samsung, that’s smaller, more wearable sizes and a (rather surprising) ongoing push for authenticity. Doesn’t sound like too bad a recipe. Thanks to its 42mm, round cased version, this could perhaps finally be a smartwatch I wouldn’t mind wearing in the long run. 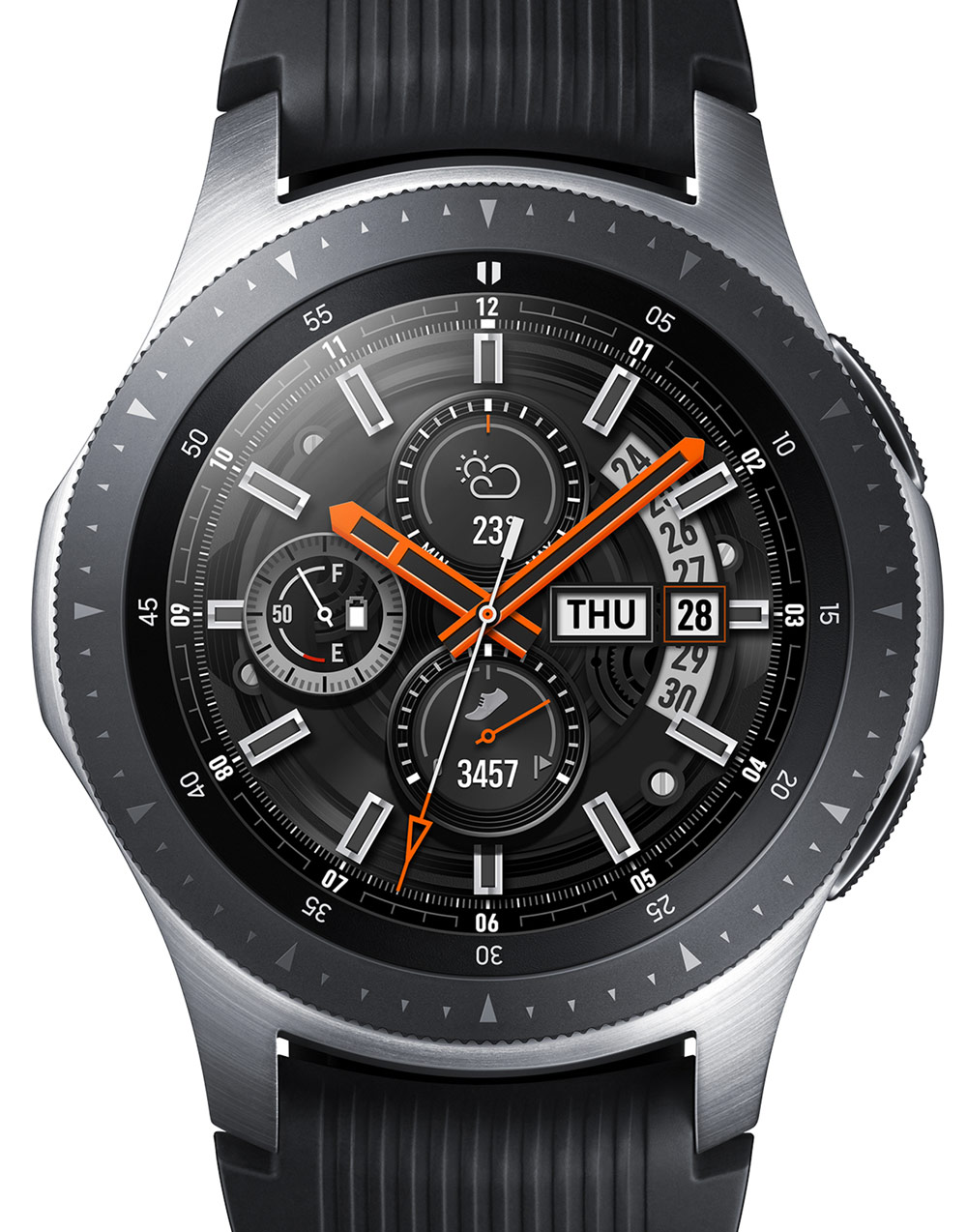 The Samsung Galaxy Watch will go on sale later this month on August 24th. The Bluetooth-only version of the Samsung Galaxy Watch will be priced at $349 for the 46mm version and $329 for the 42mm version. The LTE version will be available through AT&T, Sprint, Verizon, T-Mobile, and Samsung.com later this year. Pricing for the LTE version has yet to be determined. samsung.com