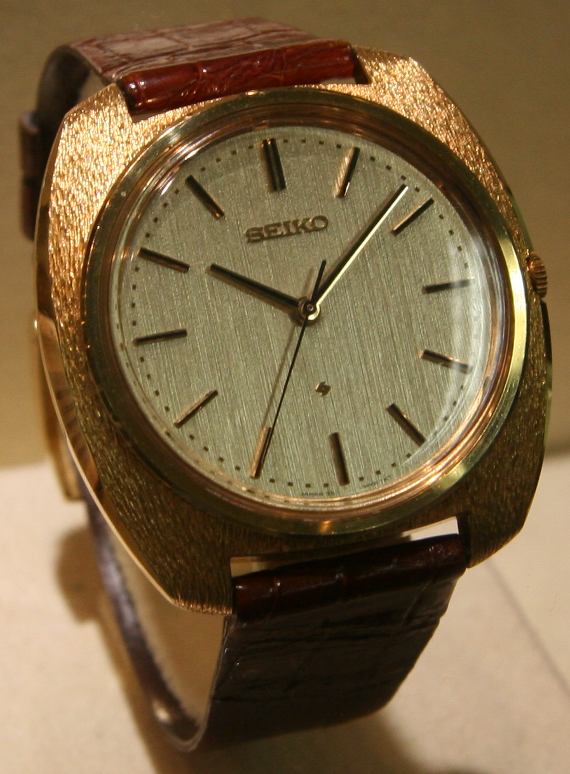 When I was recently in Japan, the Seiko folk made sure we knew all about the Seiko Quartz Astron (ref. 35SQ) watch. For whatever reason, the knowledge that Seiko was the inventor of the world’s first quartz movement powered watch has eluded me (until then that is). Coincidentally, this December 2009 is the 40th anniversary of the Seiko Astron quartz watch. I got to check out one of the original Seiko Astron watches. Two of the images here are mine that I took of a Seiko Astron watch back in Japan. The watch itself is a testament to Seiko having help up so well after 40 years. It looked as though it was made no more than 5 years ago. The retro style of the watch is surprisingly durable as the look of the watch seems to meld well with today’s popular vintage looks. The 18k gold case itself is tonneau in shape with that distressed-like metal textured look that used to be popular. Then you have a smoothly polished dial and a clean functional face. At the time, the design was pretty new for Seiko who had been essentially making the same style watch case for a decade. This was back in 1969. 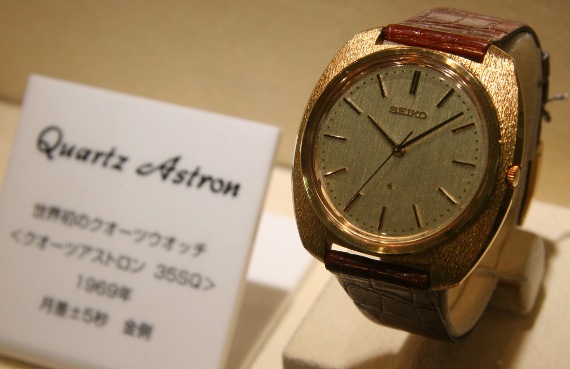 The road to a quartz watch was about 10 years long. This was all part of the famed “Project 59A,” a collaboration of Seiko’s top engineering minds trying to figure out how to miniaturize a quartz movement down into a watch. In addition to space, power consumption was a major issue. Seiko already has been making a few working quartz clocks, but each was too large. Always the difficult matter of making things smaller. I was told that the real saving grace to the project was the IC innovation. “IC” standing for integrated circuit in this instance. This technology was smaller and consumed less power that its predecessors like the vacuum tube and transistor.

It was originally planned for quartz movements to have sweeping hands, just like mechanical movements. This is in fact found on some quartz clocks today. But this style of seconds readout was very tough on the power source. The battery needed to be drained continuously to move the hand. Thus, it was decided that a “dead seconds” system be used – where the second hand moves just once each second, thus  reducing the power consumed from the battery. And low and behold that ticking seconds hand that is the hallmark of quartz watches was born. It is all about power consumption and keeping batteries alive in watches from 2-10 years. 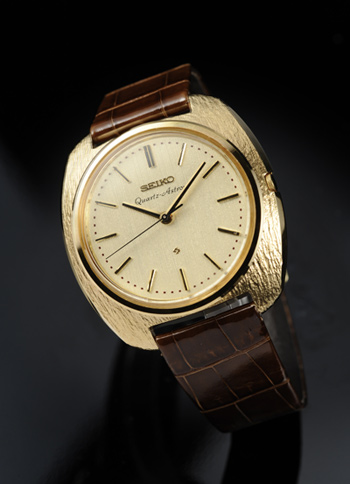 Once the Seiko Astron Quartz watch arrived, it was like a magnum bullet shot at the most sensitive spot of the mechanical watch industry. Switzerland was terrified. Depending on who you were at the time, this hailed in the era known as the “quartz revolution,” or “quartz crisis.” Revolution and crisis because it was the father of digital quartz watches that became so cheap to make that almost totally destroyed the luxury watch industry. Before the quartz watch – but still battery powered – was the electronic tuning fork regulated watch. Quartz was a lot better than the tuning fork watches. While mechanical watches averaged about 10-20 seconds a day, the Seiko Astron was accurate to within 5 seconds a month. You can tel that the Astron was not some nerdy tech watch. Again, it was conservatively styled and in 18k gold. A luxury watch by standards of the past and of today.

While quartz watches dominate the market today, they are arguably less “emotional” and refined than mechanical watches. Which is why enthusiasts just seem to prefer mechanical watches more (even the people at Seiko as their best watches are mechanical or mechanical in spirit). However, that was not the case when the Quartz Seiko Astron was initially released. It was a unique piece of highly sophisticated technology, and only Seiko had what it took (lots of patience and dedication) to make it happen. It a lot of hard work and 10 years of time isn’t emotion, then I don’t know what is. For that reason some of the classic quartz watches like the Seiko Astron and ones like it are of the most interesting quartz watches to inspect and own as a collector. www.seikousa.com

PDF with more information about the Seiko Quartz Astron watch and its history here.