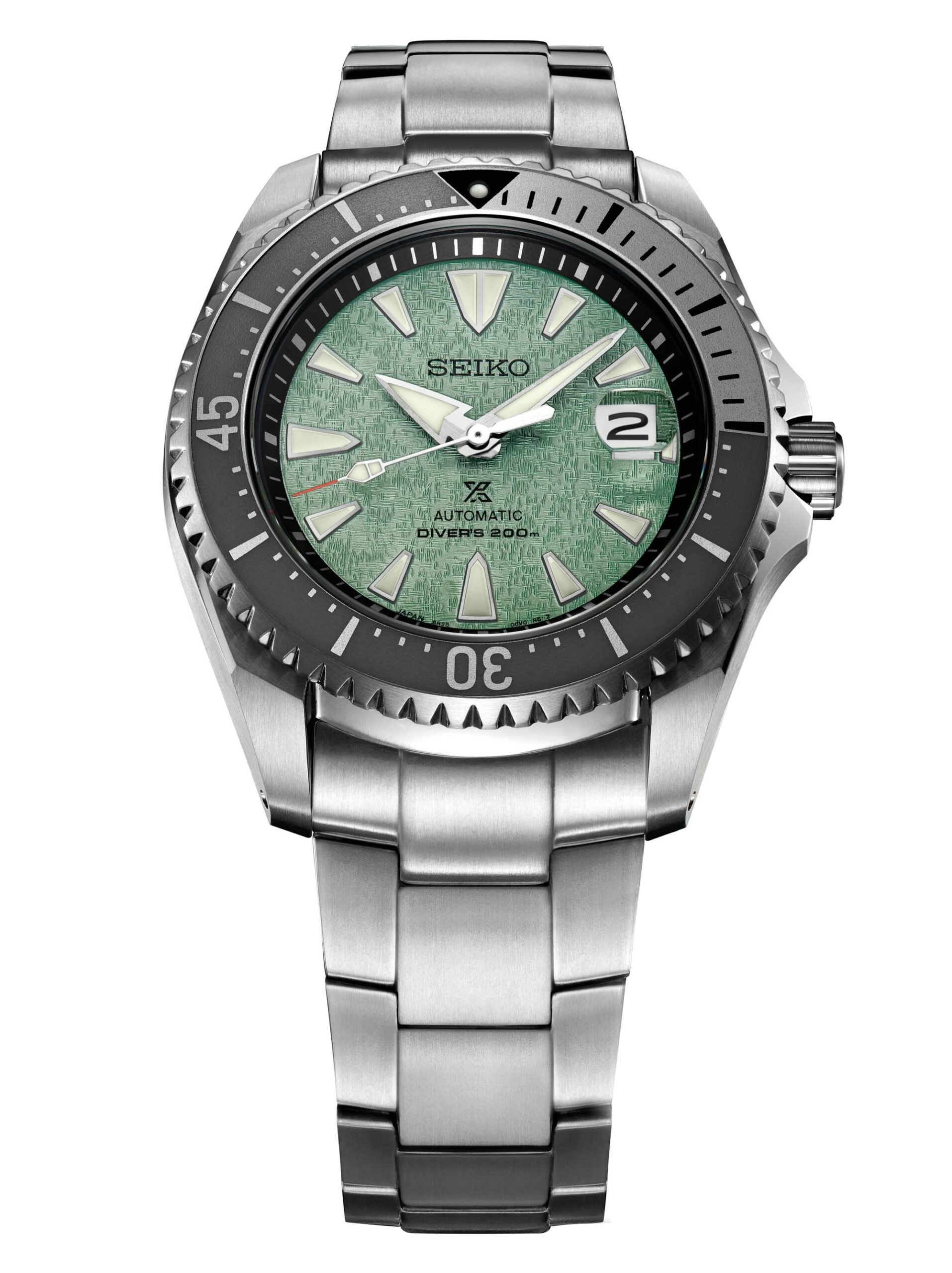 It’s hard to think of a brand that has started more watch-collecting journeys than Seiko. Although the fan-favorite Japanese manufacturer produces just about every type of timepiece imaginable and operates at an impossibly wide range of different price points, it is Seiko’s various dive watches that consistently rank among the most popular models for collectors, and Seiko has a rich history of producing underwater timepieces that rivals that of just about any brand within the industry. Rather than having just one famous model, Seiko’s archives are full of famous dive watches, and each one has its own nickname that developed organically through the brand’s passionate collector and enthusiast community. Seiko is no stranger to producing limited and special edition timepieces, and over the years, many of its divers have served as the foundation for various special edition models. Joining the lineup during this final stretch of 2022 are three new Seiko Prospex dive watches that are inspired by underwater caves and exclusively produced for the U.S. market. 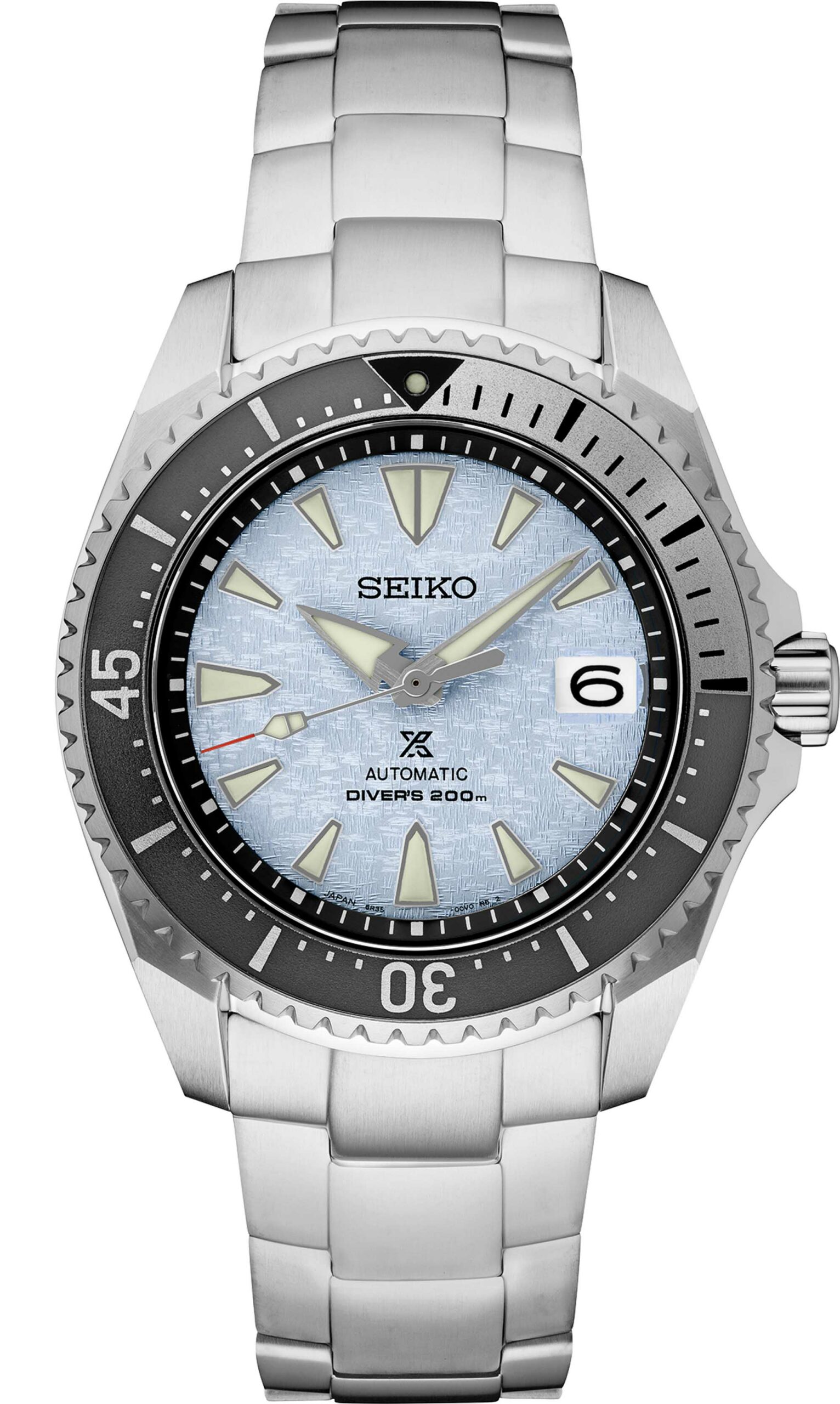 All three of the new U.S. Special Edition Seiko Prospex divers feature the same case, which will be instantly recognizable to Seiko fans as being the model nicknamed the “Shogun” within collector circles. While the original Seiko Shogun debuted back in 2008, a second generation was released in 2020, and it is this model that now serves as the basis for these three new U.S. Special Edition watches. Crafted from titanium and featuring Seiko’s “super hard” coating for increased scratch resistance, the case of the new watches measures 43.5mm in diameter by 13.25mm thick, with an overall lug-to-lug distance of 51mm. Like other models from the second generation of the Seiko Shogun, the three new U.S. Special Edition Prospex watches feature sapphire crystals protecting their dials, with cyclops magnification bubbles fitted to the surface in order to enlarge the date display. Surrounding the crystal is the obligatory unidirectional rotating timing bezel, and all three models are fitted with the same two-tone insert that features a fully demarcated elapsed time scale and is dark gray in color, with a lighter shade of gray appearing for the first fifteen minutes as a reference to the duality of light and dark that exists within the undersea world. A screw-down winding crown at 3 o’clock combined with a solid titanium caseback help provide the new U.S. Special Edition Seiko Prospex divers with an ISO-certified 200 meters of water resistance, and all three of the new models feature solid-link titanium bracelets fitted to their drilled 22mm lugs, which feature wetsuit extensions built into their clasps and are finished with Seiko’s super hard coating for added resistance to wear and scratches. 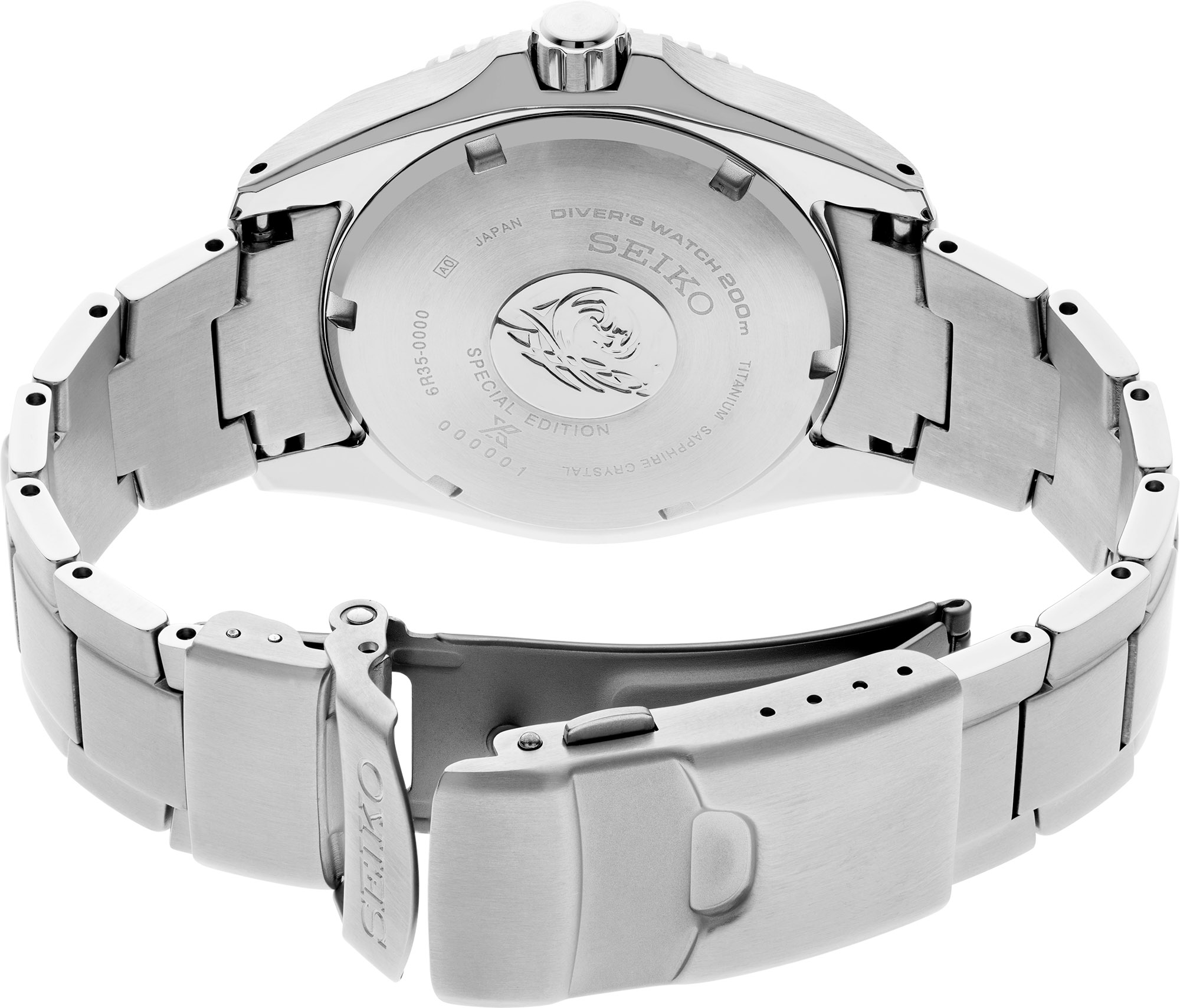 Where the trio of new U.S. exclusive Seiko Prospex dive watches differs is in regards to their dials, and all three models feature a different colored dial that is inspired by underwater caverns and the environments that surround cave divers. The SPB349 features a light green dial, while the SPB351 is fitted with a light blue-gray dial, and the SPB353 receives a dial that is a deep blue-green color. All three of the dial colors are inspired by the various hues that are revealed when underwater caves are illuminated by divers’ flashlights, and the dials themselves feature a texture on their surface that resembles the natural formations and mineral deposits found on undersea cave walls. The hour markers follow the same style as those on the second generation of Seiko Shogun watches and appear as large points that are oriented towards the center of the dial that work in conjunction with the trio of large centrally mounted hands to display the time. The tip of the seconds hand on all three models is finished bright red for a small additional pop of contrasting color, and all three of the watches feature white calendar discs that appear through the window in the dial at the 3 o’clock location. Additionally, just as you would expect from any Seiko dive watch, the hour markers and all three of the hands are finished with Seiko’s LumiBrite luminescent material to offer a brightly glowing display in the dark, regardless of whether you find yourself in an underwater cavern or simply your local movie theater. 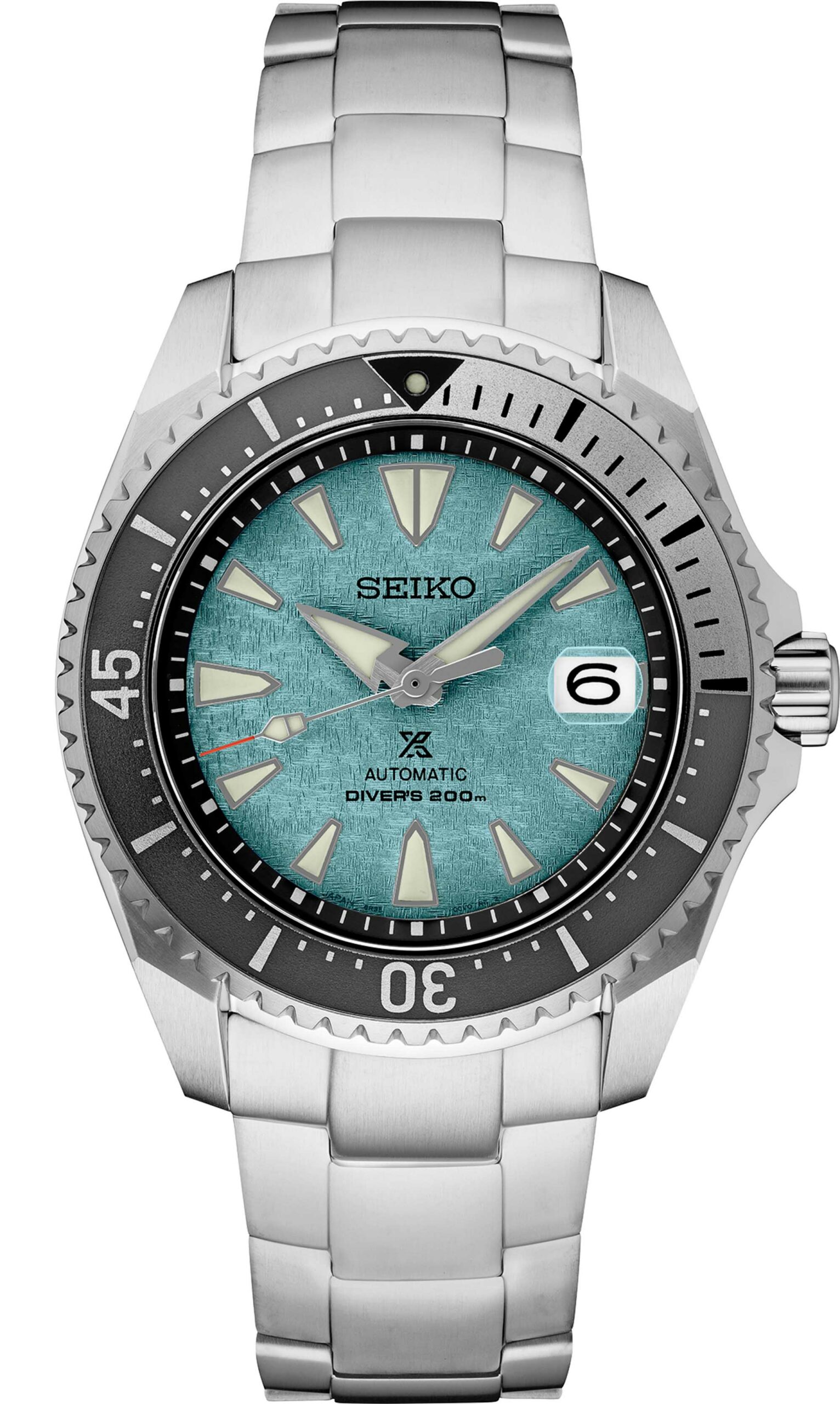 Powering the trio of new Seiko Prospex U.S. Special Edition divers is the brand’s Caliber 6R35 automatic movement. Representing a noticeable step up from the brand’s entry-level 4Rxx series, the Seiko 6R35 is a 24-jewel, self-winding movement that runs at a frequency of 21,600vph and is designed and manufactured entirely in-house by Seiko. Similar to the ubiquitous 4Rxx range of movements, the Caliber 6R35 offers the convenience of hacking, hand-winding, and a quickset function for the date display; however, the 6R35 also benefits from an extended power reserve of approximately 70 hours. Seiko movements are known for their reliability and ease of service, and the Caliber 6R35 promises to be no different, as it is currently the movement of choice for many of Seiko’s higher-end Prospex models. While the rather spartan finishing of the 6R35 doesn’t offer much in terms of visual intrigue, Seiko Prospex dive watches are first and foremost designed to be functional tools, and since the movement is hidden behind a solid titanium caseback anyway, the Caliber 6R35 seems like an entirely appropriate choice for these three new U.S. exclusive Shogun models. 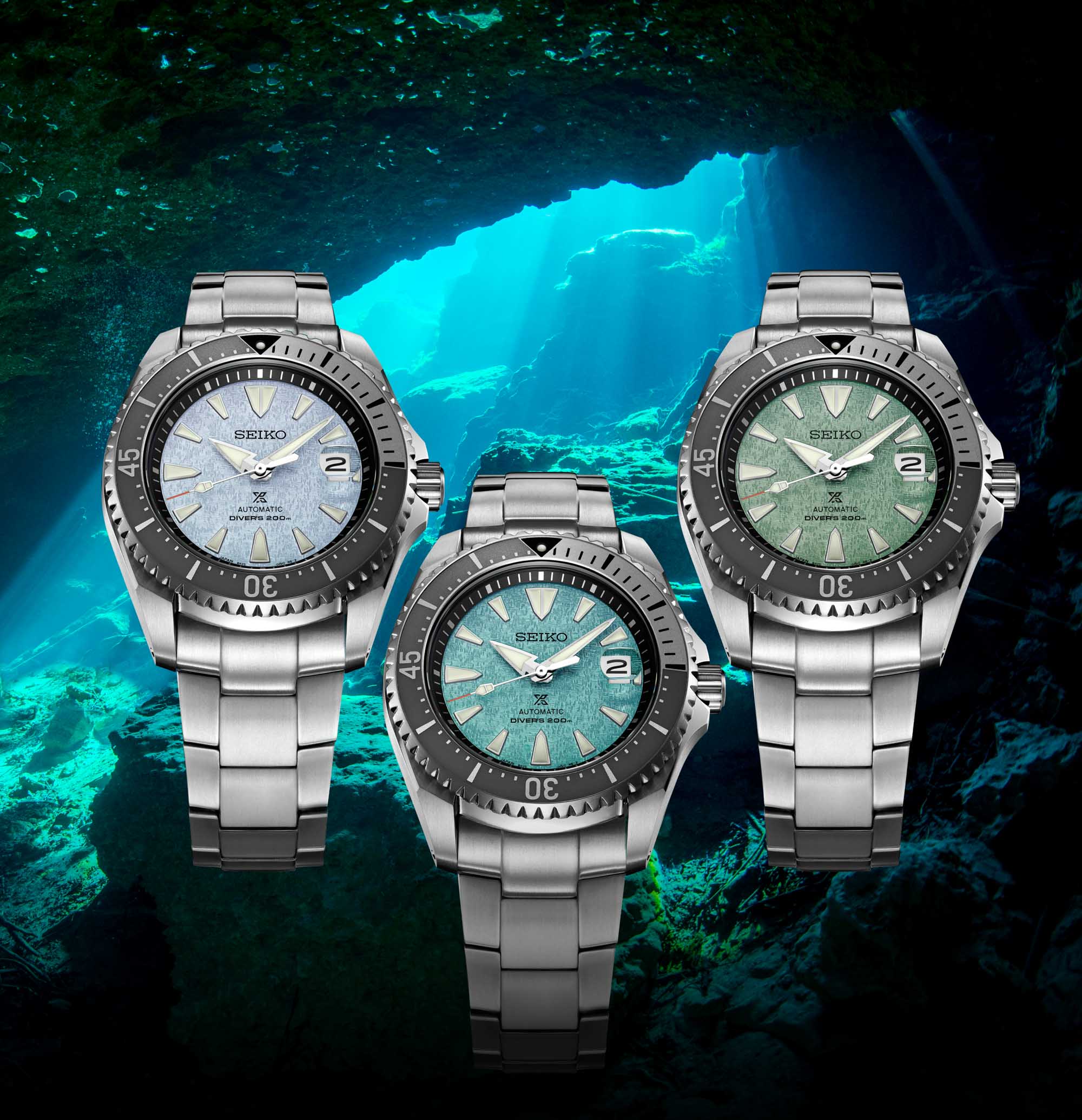 A lot of watch brands draw criticism for producing what is often considered to be an excessive number of limited or special edition pieces; however, Seiko is such a large and diverse manufacturer that the dozens of different models the brand puts forward each year have almost become an integral part of the company’s greater DNA. Additionally, the way that Seiko chooses to create some watches specifically for certain regional markets adds additional excitement for enthusiasts of the brand, and I wouldn’t be surprised if there were a number of non-American collectors out there that will try to get their hands on these new Seiko Prospex U.S. Special Edition watches — just like how many Americans avidly collect the various JDM-exclusive Seiko models. All three of the new cave diving-inspired U.S. Special Edition Seiko Prospex watches will be accompanied by an official retail price of $1,500 USD, and they will be available from select Seiko retailers starting in October 2022. For more information, please visit the brand’s website.