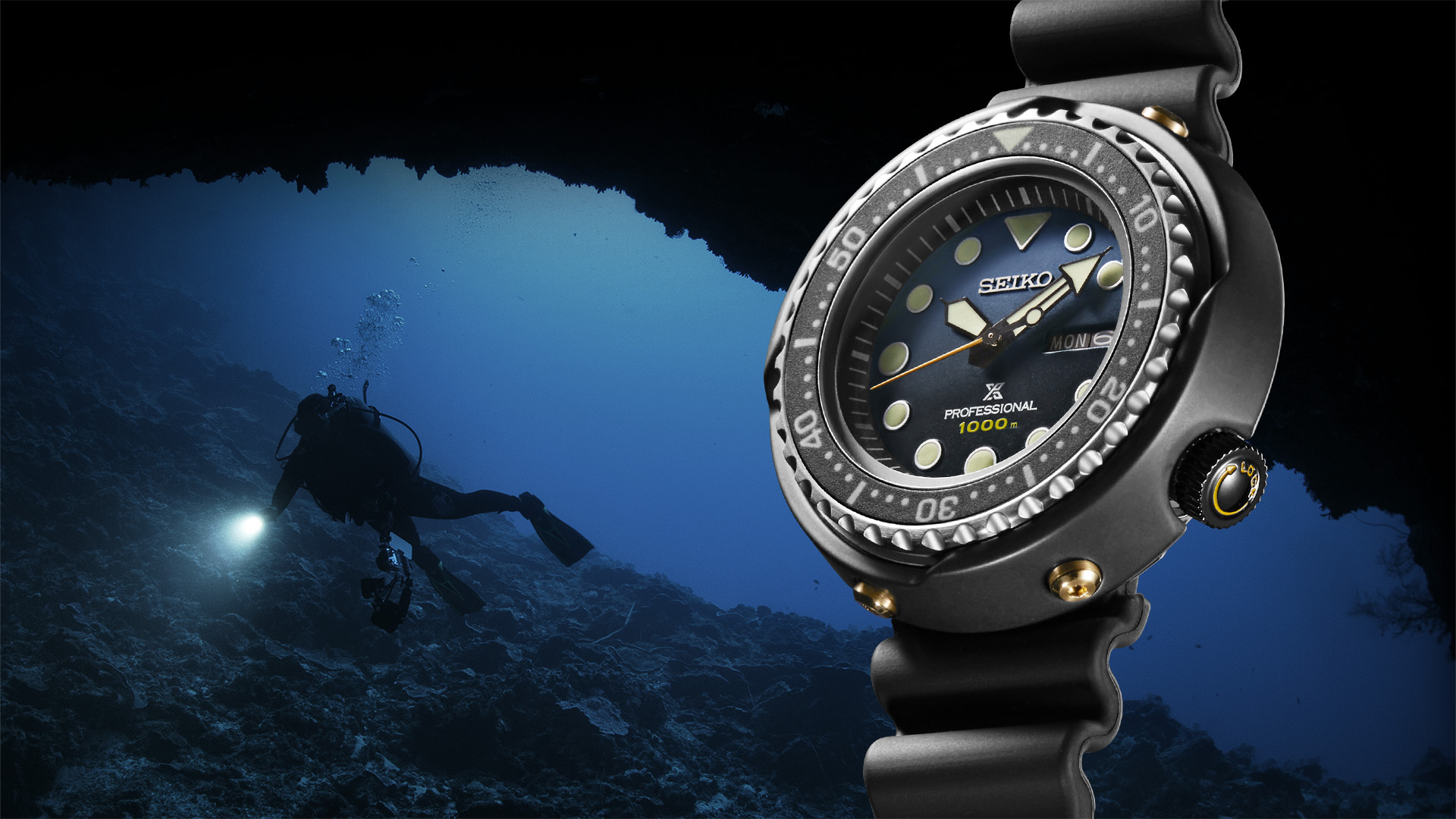 Japanese industry giant Seiko may have one of the most unique and varied back catalogs in dive watch history, but few if any of the brand’s aquatic designs are as bold and distinctive as the shrouded cylinder-cased “Tuna” series of professional divers. Although the “Tuna” design dates back to 1975, the series reached one of its peaks in 1986 with the introduction of a quartz-powered, 1,000 meter-rated model that set new standards for capability and ruggedness in professional dive watches. Nowadays, Seiko is no stranger to revisiting its vintage designs for new models, and for its latest release the brand is reinventing the 1986 “Tuna” with modern materials and an upscale execution. The new Seiko Prospex 1986 Quartz Diver’s 35th Anniversary Limited Edition aims directly at hardcore fans of the brand with a loving, high-end tribute to one of the company’s most dramatic and enduring tool watch designs.

There’s no denying that the Seiko Prospex 1986 Quartz Diver’s 35th Anniversary Limited Edition is a hefty watch. At 49.4mm across and 16.3mm-thick, the monobloc titanium case should be imposing on the wrist. That said, the design’s hidden lugs and circular silhouette tend to mitigate lug overhang. The utilitarian case form follows the classic “Tuna” pattern, with a wide, heavily toothed dive bezel surrounded by a protective black shroud that dominates the view of the case. For the 1986 Quartz Diver’s 35th Anniversary Limited Edition, Seiko interprets this element in zirconia ceramic, offering a hardness seven times greater than ordinary steel. While the bezel is rendered in bare brushed titanium with a black insert, the hex screws fastening the shroud at 1 o’clock, 5 o’clock, 7 o’clock, and 11 o’clock are finished with anodized gold as a nod to the fan-favorite “Golden Tuna” color scheme of the original 1986 model. Seiko has reimagined the 4 o’clock screwdown crown of the 1986 Quartz Diver’s 35th Anniversary Limited Edition for added safety, topping the glossy black piece with hazard yellow “Lock” text and an arrow indicating the direction to screw the crown into position. As an extra precaution, Seiko uses the same bright yellow for the crown tube, allowing wearers to see at a glance when the crown is unscrewed and unready for diving. As is fitting for this hardcore, professional-oriented saturation diver design, Seiko rates this case with a massive 1,000 meters of water resistance. 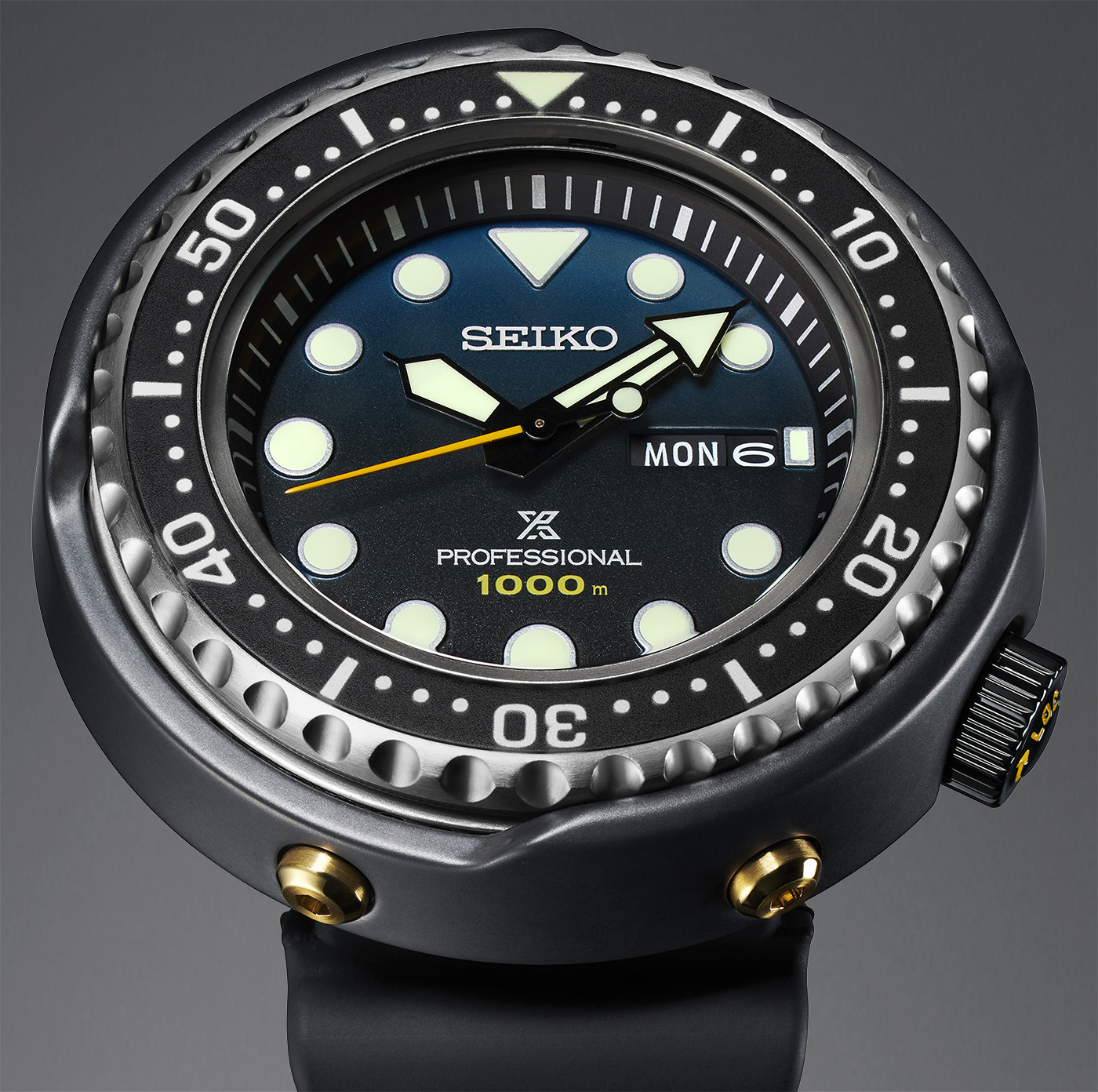 Like the case, the dial of the Seiko Prospex 1986 Quartz Diver’s 35th Anniversary Limited Edition streamlines and modernizes the look of the ‘80s original, while integrating special nods to the legacy of the series. The overall dial layout is the same as its forebears, with applied diver indices and a beefy sword-and-arrow handset, but this new iteration distinguishes itself in the details. The laddered structure of the 1986 model’s hands is replaced by a central striped minutes hand, drawing more from the look of the original 1975 “Grandfather Tuna.” In addition, the indices at 12 o’clock, 6 o’clock, and 9 o’clock do not use the syringe tips present on the 1986 version, eliminating the semi-crosshair dial style for a more minimal design. The dial surface itself uses a matte gradient from navy blue to a deep black, evoking a descent into the deep ocean, but potentially detracting from the hyper-functional spirit of the line. Seiko adds a vibrant highlight to this dial with twin punches of the case’s hazard yellow tone on the seconds hand and 6 o’clock depth rating text, both adding a splashy contrast to the deep and somber cool tones of the dial surface and visually unifying the looks of the case and dial. 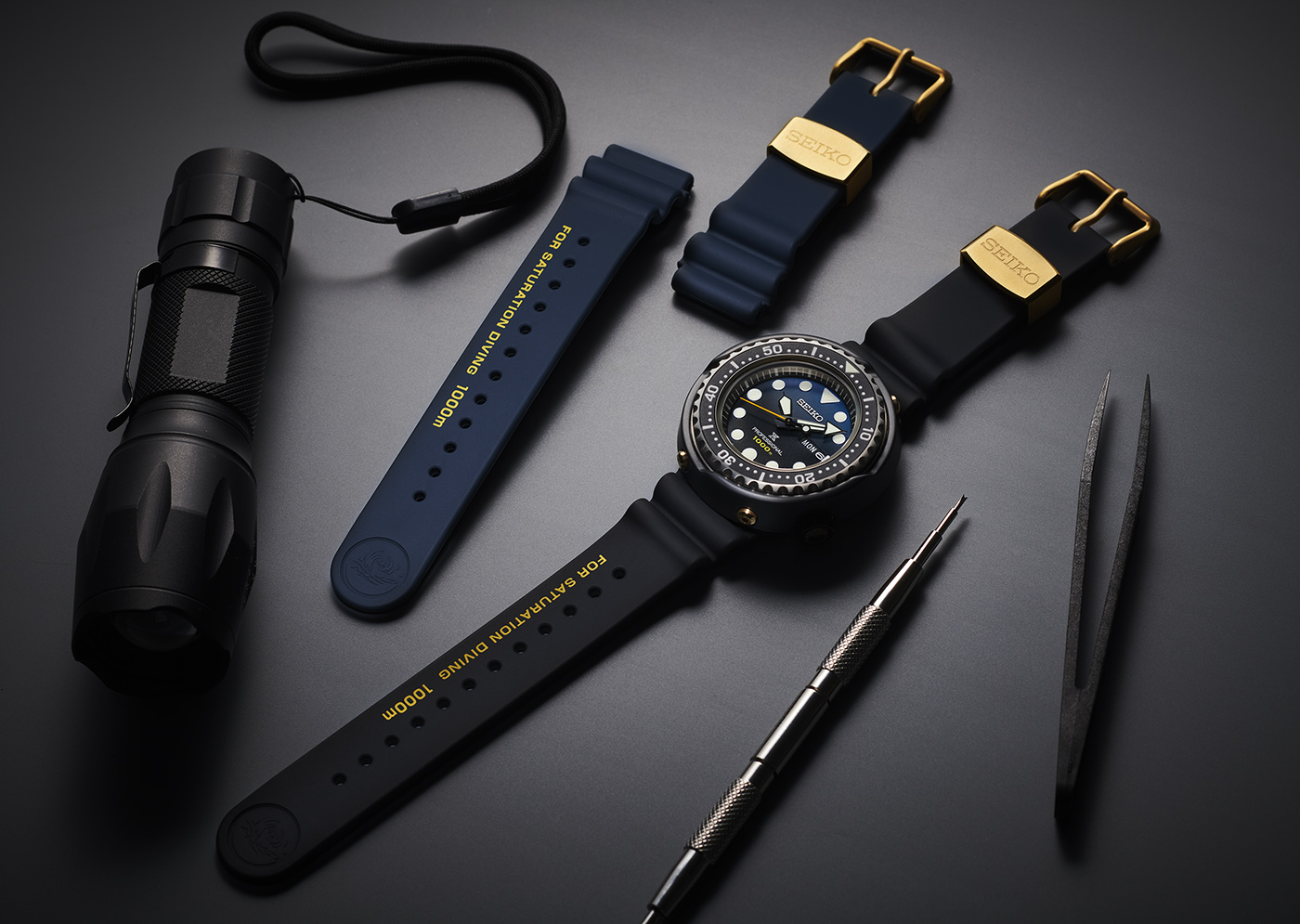 Seiko uses its in-house 7C46 quartz movement to power the Prospex 1986 Quartz Diver’s 35th Anniversary Limited Edition. While far from new, the 7C46 was developed with the operational rigors of the “Tuna” line in mind and includes a high-torque motor for the wide heavily lumed hands, a magnetic resistance of 4,800 A/m, and full metal construction for durability and longevity. While it may lack some of the refinement and finishing of sister brand Grand Seiko’s 9F series of quartz calibers, the 7C46 is undeniably robust and offers an accuracy of +15/-15 seconds per month with a five-year battery life. Seiko ties the 1986 Quartz Diver’s 35th Anniversary Limited Edition together with reinforced accordion-style silicone rubber straps in both black and navy blue, both with accent text in hazard yellow. 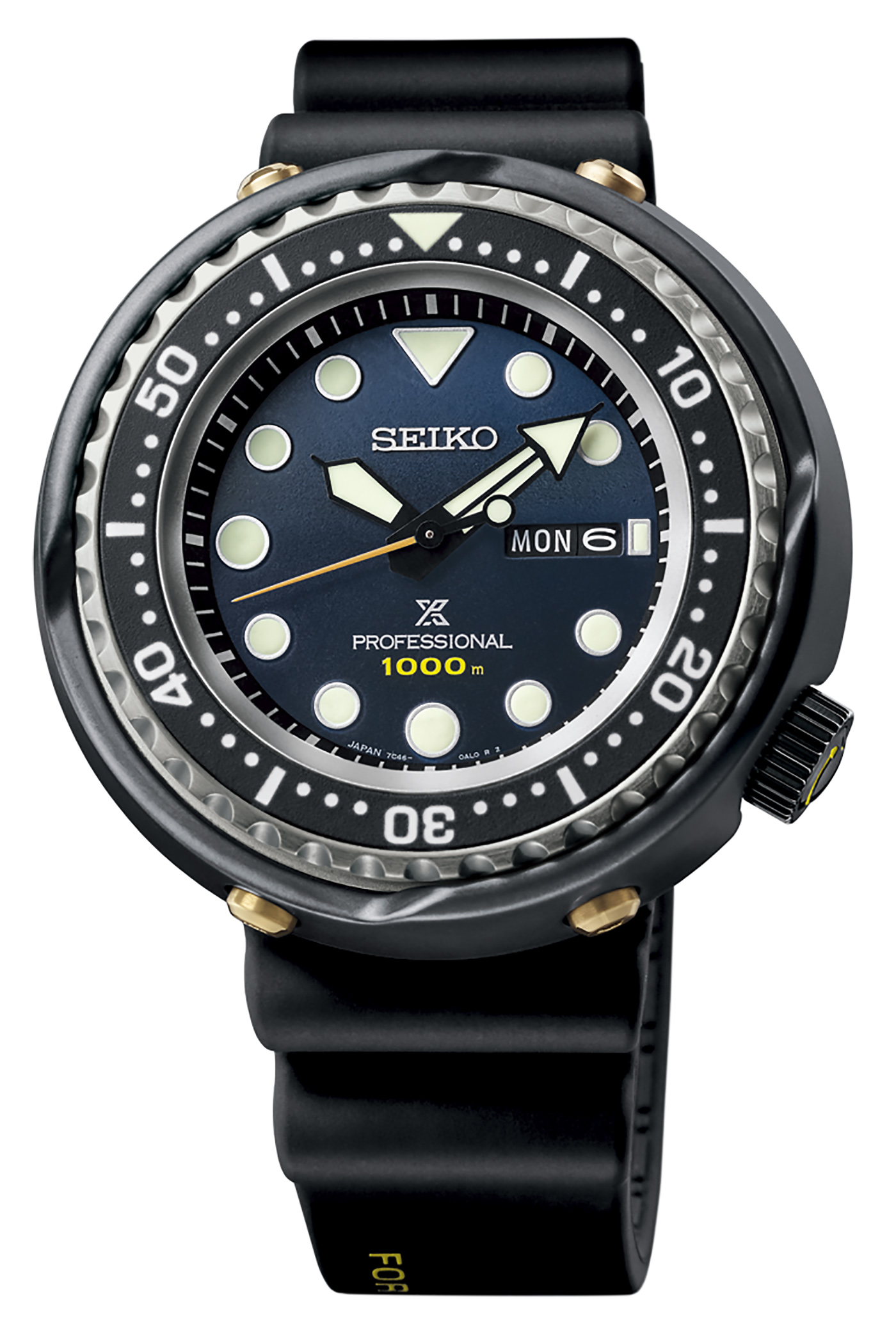