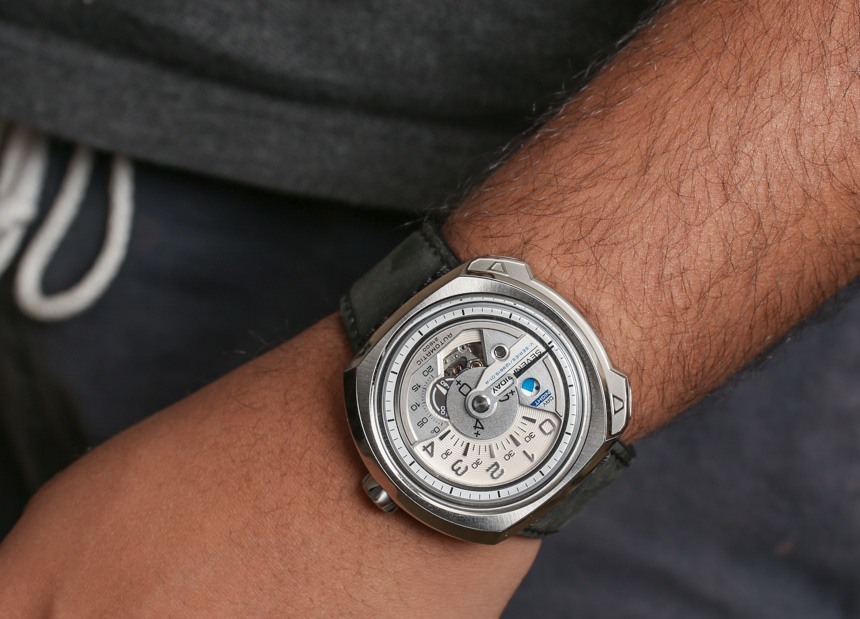 In the course of five short years, SevenFriday has created a seemingly unique reputation in the world of wristwatches. The P- Series (reviewed here) and M-Series (reviewed here) were seminal lines that, for lack of a better phrase, disrupted conventional thinking about “haute horology” and its reputation for exclusivity. The new SevenFriday V-Series clearly isn’t up there with the finest in watchmaking in terms of quality and execution, but the brand seems absolutely committed to taking the “funky mechanics” part of that and tuning it down to a more accessible price point. This could (and does) result in a form-following-function decision due to the inclusion of the new “Fast Strap Change” (FSC) system which brought on the addition of two protrusions on the left side of the case. While we’re on acronyms, it’s also got a Near Field Communication (NFC) chip that can be used to check the authenticity of the watch.

And then there’s the question I asked myself when I first strapped this watch on: what exactly am I looking at here? There’s a lot to talk about with the SevenFriday V-Series, and I’m going to focus on the experience of wearing it, as much of the on-paper aspects of this watch were covered by Rob Nudds in his SevenFriday V-Series release article here. So, first things first: what time is it? The first few moments I spent with the watch had me asking that question, followed by a dejected glance at my iPhone. You’ve got the standard minute hand, but SevenFriday has concocted a creative way of figuring out what hour it is. And it involves some basic math. Essentially, you’ve got a central dial marked +0, +4, and +8, and in place of the traditional 11 o’clock to 3 o’clock positions, there is a scale marked 0-4 with markers for 15-minute increments with a labeled 30-minute increment for each hour. It’s a somewhat uncomfortable feeling at first, but it’s also not that often that I’m forced to be so engaged with a timepiece that I actually have to do some work to understand it. The SevenFriday V-Series doesn’t suffer passive wearers, and that’s a pretty risky move; It’s not for everyone, but that’s also part of the appeal. This thing is a serious conversation piece, and quizzical looks by friends and strangers alike are a common occurrence. Getting back to the dial, there’s still more going on. Just above 9 o’clock, you’ve got a night/day indicator, and a seconds dial at 5 o’clock marked with 0, +20, and +40 culminating in the full minute rotation. You even get a look inside the engine at 7 o’clock with a tease of the Miyota movement (a bit more on that later), showing a little bit of the balance and escapement – a very cool touch. There are 4 levels to the dial, with 12 applied galvanic elements. That’s all great, but it’s the level of the finishes and attention to detail that make the wearer know they’ve got more than just a watch that has a funny way of telling you the time on their wrist. Everything on this watch feels and looks refined. The crown is nice and solid, and pulls out without a lot of effort. Adjusting the time is a breeze, too. Just make sure you know how to read it first. We tried out the V1/01 which has a sleek white and blue dial. The other option is the V2/01 which has a more industrial-era-themed black and gold color scheme. So, we’ve got one that looks contemporary and sleek while the other pays homage to an industrial past. Same watch, two distinct yet complimentary visions. Keep this dichotomy in mind. It’s important to note that this watch is big, measuring in at a width of 49.7mm. Oddly enough, it doesn’t look or feel too big for its own good. I’d go so far to say that, having worn it for several days now, when the size is taken into account with the “personality” of the watch, you’ve got the Goldilocks effect of it feeling just right. (Don’t Google “Goldilocks Effect” because it turns out that it’s a real thing that’s slightly more complicated than my rudimentary application of the phrase to this review). Now, I’m over 6’1”, wear a size 12 shoe, and my wrist measures at just around 7.5 inches – to avoid confusion, you’re looking at Ariel’s images in this post and hence the watch is pictured on his wrist that is about 6.75″.

That being said, when I first heard about the specs of the SevenFriday V-Series, I was convinced it would drive me nuts and feel like a Cadillac Escalade hubcap strapped to my wrist. However, while I’m not going to profess my love for big watches, SevenFriday really makes it work by simply making the case rectangular in the sense that yes, it is very wide at 49.7mm, but at the same it’s a mere 44.3 millimeters lug-to-lug. To give you an idea, a 42mm wide, round cased, classical watch is 49-50 millimeters tall, so the V-Series actually does not extend as close to the edges of the wrist, while it still manages to look substantial thanks to its width. The question of wearability leads to one of my favorite parts of the SevenFriday V-Series, which is the strap. The actual strap is made of calfskin, feels high-quality, and is really comfortable. However, the FSC (Fast Strap Change) element is really fantastic and, in my opinion, a standout feature. A watch pusher (or, really, any soft-ended tool) can be used to push the buttons on the left side of the case, and the straps come out easily. And, just as importantly, they easily click back into place. The whole process of removing and reinstalling the straps on my first try took me less than a minute, so kudos to SevenFriday. I hope other watchmakers follow suit. The other innovative aspect to this watch (though not proprietary, by any means) is found on the back of the case. First of all, SevenFriday likes to really pack as much information on the back of the case as they can. Hidden behind a map of the world, there’s a NFC (Near Field Communication) chip that can be linked to a mobile device. Currently, SevenFriday is only using the technology to verify the authenticity of the watch by linking the watch to a downloadable app. Get the app, scan the watch, and check the authenticity. Pretty simple. It’s not the only watch exploring NFC technology. Bulgari’s Magnesium Diagono is taking it a lot further. The Diagono connects the watch to a secure source that can house data as sensitive as bank and personal information or can even be used as a key. IWC is exploring this technology as well, with their upcoming IWC Connect which will be a module located on certain IWC straps. The real question here is: is SevenFriday planning on developing NFC capability as far as Bulgari or are they really just waiting to see if buyers who are this invested in high tech wristwatches will just add an Apple Watch to their collection? To me, it brings to mind the question “would car brands have invested so much into hybrid technology if electric cars were already popular and in mass production?” Bulgari and IWC have reputations that place them among the most recognizable luxury watch brands in the world. These are reputations that can withstand a few fumbles. SevenFriday is a young and bold company, but I actually give them a lot of credit for perhaps taking a more measured approach with such a new technology that asks more questions than it answers (or it could have just been a financial decision). In the course of my time with this watch, I found myself at an automotive show with our very own Ariel Adams. As we slowly made our way through the sea of hors d’ouevres, I spotted the actual DeLorean from the peerless Back to the Future franchise. Once the nerding out subsided, I thought about how a brand can go from being seen as daring and innovative to being the poster-boy for financial failure. Among other reasons, the Delorean was a victim of trying to do, and be, too much at one time, with no restraint… at all. It led me to think, if the already brash and envelope-pushing (not to mention nearly 50mm) SevenFriday V-series were packed full of relatively unproven and oftentimes eyebrow-raising NFC capabilities, would the brand face the risk of becoming like the ill-fated gull-wing car? I personally am bullish on the NFC chip, but we’re far from a consensus. I’m not going to get too into it, but one of the big reasons why SevenFriday is a hit among consumers is the fact that the brand eschews pricier Swiss movements for a reliable Japanese Miyota movement. The Miyota Calibre 82S7 is a solid workhorse that will make sure the watch has a reliable engine under the hood. Take it or leave it, Swiss snobs. The SevenFriday V-series is a solid watch by an enthusiast’s brand that has introduced one innovation that’s a clear success (the Fast Strap Change) and has safely dipped its feet in another (obviously, the NFC). As I said previously, the SevenFriday V-Series disrupts the idea of haute horology as exclusive to those with deep pockets and as a result helps to democratize this often-inaccessible world. Think of it as an entry level alternative to an HYT or MB&F. So, what we end up with isn’t a DeLorean, but (and bear with me here about the glaring difference in “macho” levels), something more along the lines of a Mazda Miata. A price-friendlier alternative to sports cars nearing six-figures, it provides all the fun and visceral gut feeling that you would have to pay a lot more to get otherwise. Sure, it’s not the most technically impressive thing out there, but it’s fun. Plus, a scratch here and there won’t be the biggest deal in the world. Yes, telling the time requires a little bit of math, but it’s not hard to calculate the watch’s appeal with a price of just around $1,450 which is “all-inclusive” (presumably, of tax and shipping) on their site. For that price, you get a inventive, forward-looking watch with design elements harkening back to the industrial era. Back to the future, indeed. sevenfriday.com

Necessary Data
>Brand: SevenFriday
>Model: V-Series (V1/01)
>Price: About $1,100
>Size: 49.7 mm wide
>Would reviewer personally wear it: Yes.
>Friend we’d recommend it to first: The enthusiast with an appreciation for design and creativity who is looking for an avant-garde timepiece at any budget.
>Best characteristic of watch: Fast Strap Change.
>Worst characteristic of watch: The size of the case could be a bit much for some wearers.