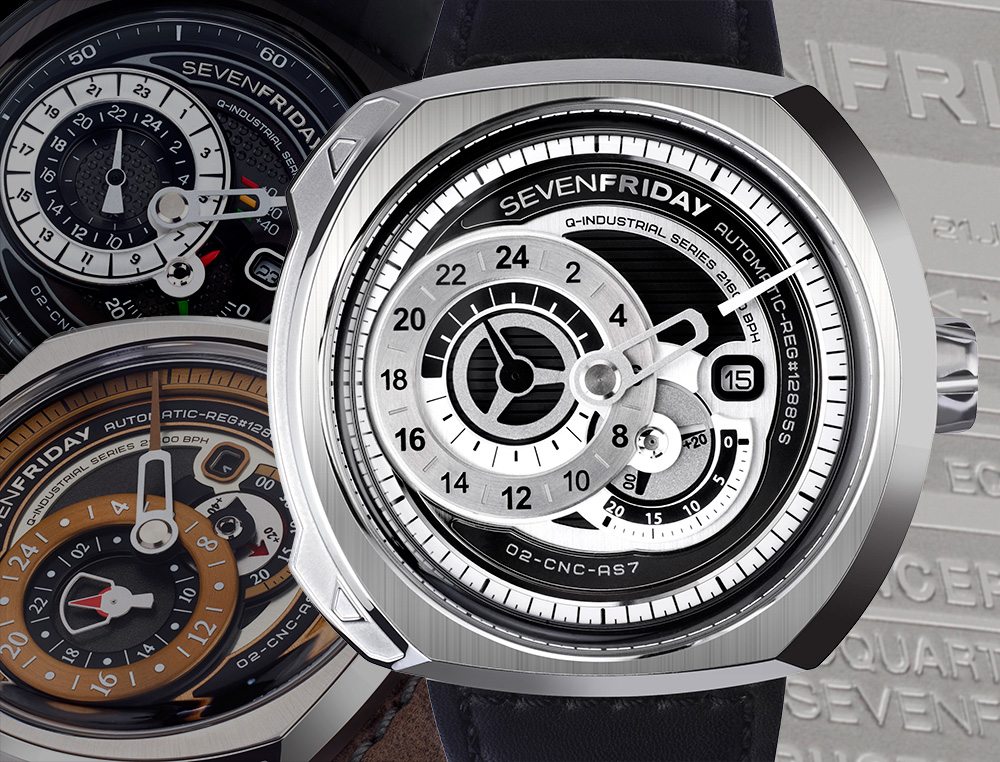 Joining the M, P, and V series watches, SevenFriday today introduces the all-new Q-Series, each with its own slick vintage industrial design aesthetic and automatic movements that have helped SevenFriday occupy a category of its own in the $1,000-$1,500 range. Having already played a part in designing a bespoke electric guitar for charity earlier this year, it was only a matter of time that SevenFriday parlayed those musical ambitions into a slice of its latest collection of affordable, industrial-inspired watches. Offering something new but carrying on the brand aesthetic, the SevenFriday Q-series isn’t a revolutionary model but it does all the things SevenFriday excels at in a solid package. 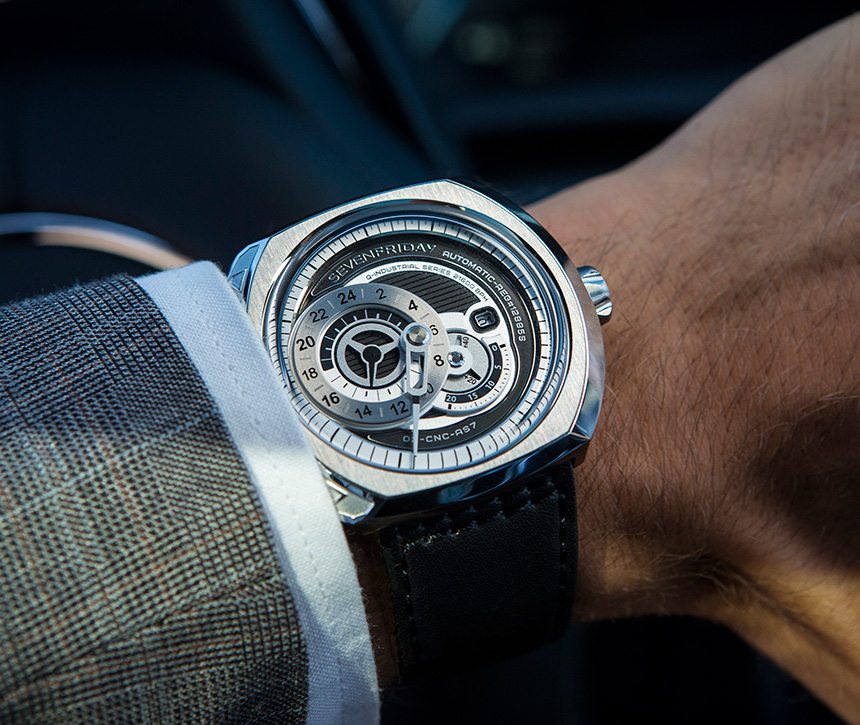 The SevenFriday Q-Series utilizes the same case and central minute hand found in the V series from 2015 (reviewed here), but introduces three new models (dial layouts, essentially), each with its own unique visual identity despite the similarities in construction. Returning elements include a 44mm stainless steel tonneau-shaped case with 30 meters of water resistance, SevenFriday’s lugless, Fast Strap Changer system, and customized Miyota automatic movement. The Miyota 2819 actually offers a central hour hand, but here SevenFriday has omitted it, using what would otherwise have been a second time zone display as the main hours, in a 24-hour format. We’ve seen a 24-hour dial on other SevenFriday watches, but a date display is a first for the brand. The Miyota 2819 runs at 3Hz, with 40+ hours of power reserve, and an accuracy of -20 to +40 seconds per day. The multi-level dial elements are visible at all angles thanks to a domed mineral crystal. 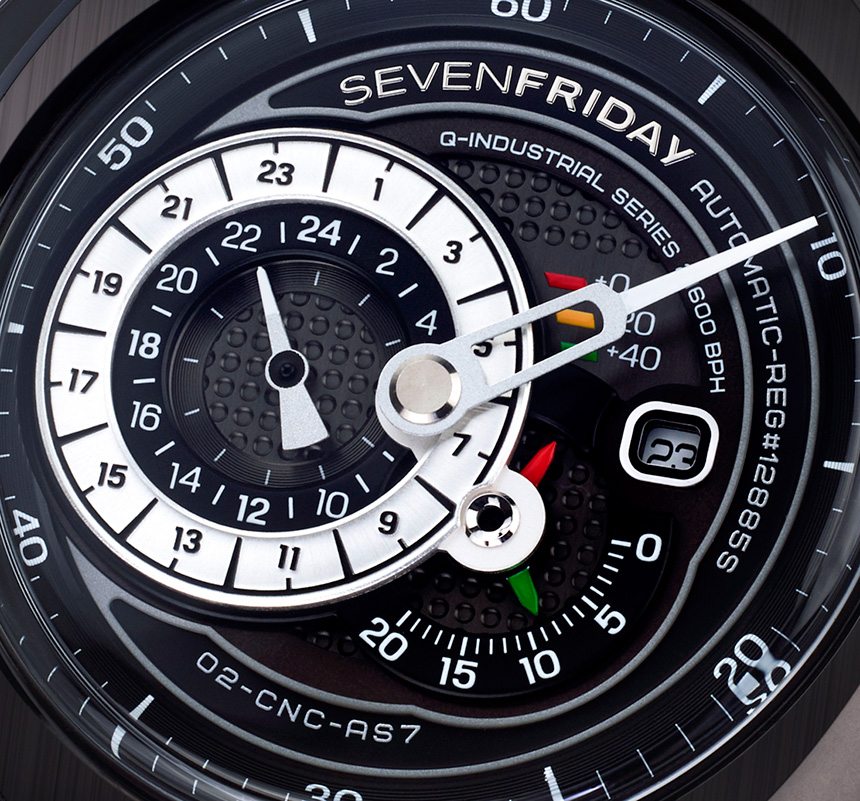 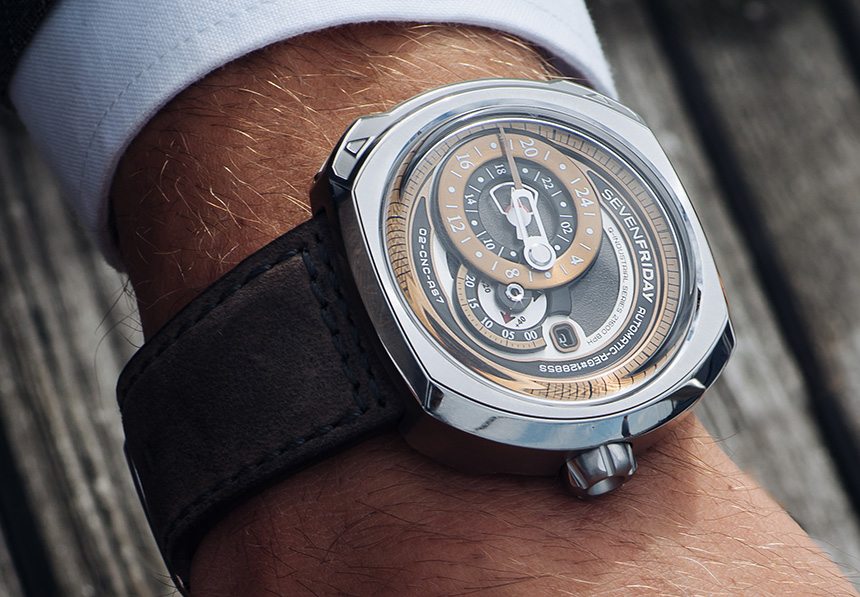 The SevenFriday Q-Series continues a formula that’s worked well for the brand thus far, and one that’s effectively spiced up the low-to-mid range watch segment with a striking, high-end look that comes at a fraction of the cost of many avant-garde luxury watches – a strategy that’s even earned the brand a nod from many watch snobs. Notice that each watch in the SevenFriday Q-Series does not differ merely in color accents, but includes other small details to further emphasize the design inspiration of each. 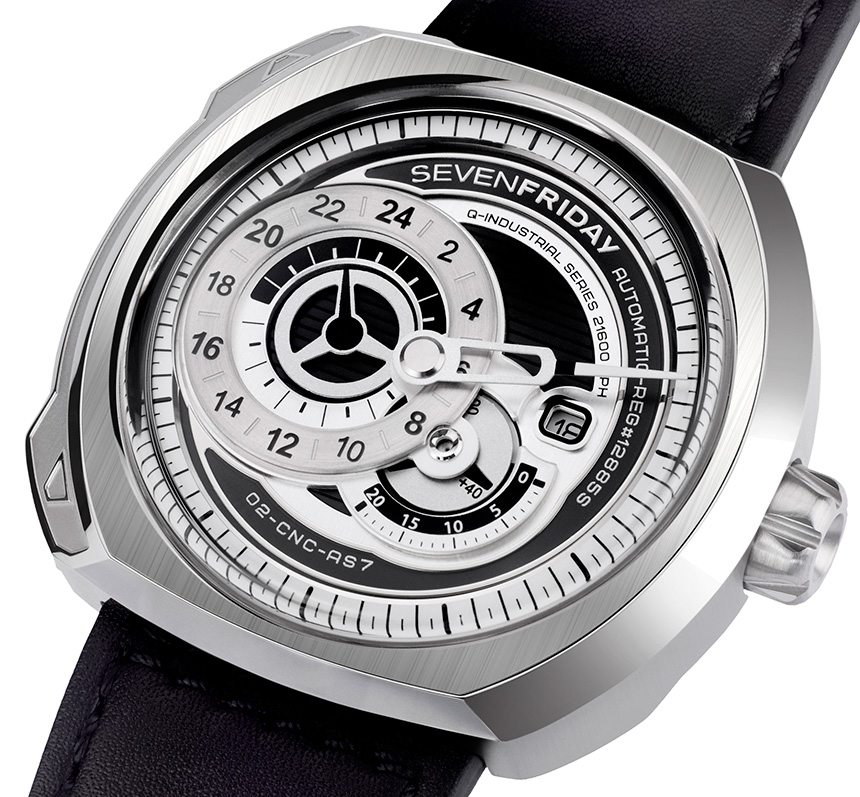 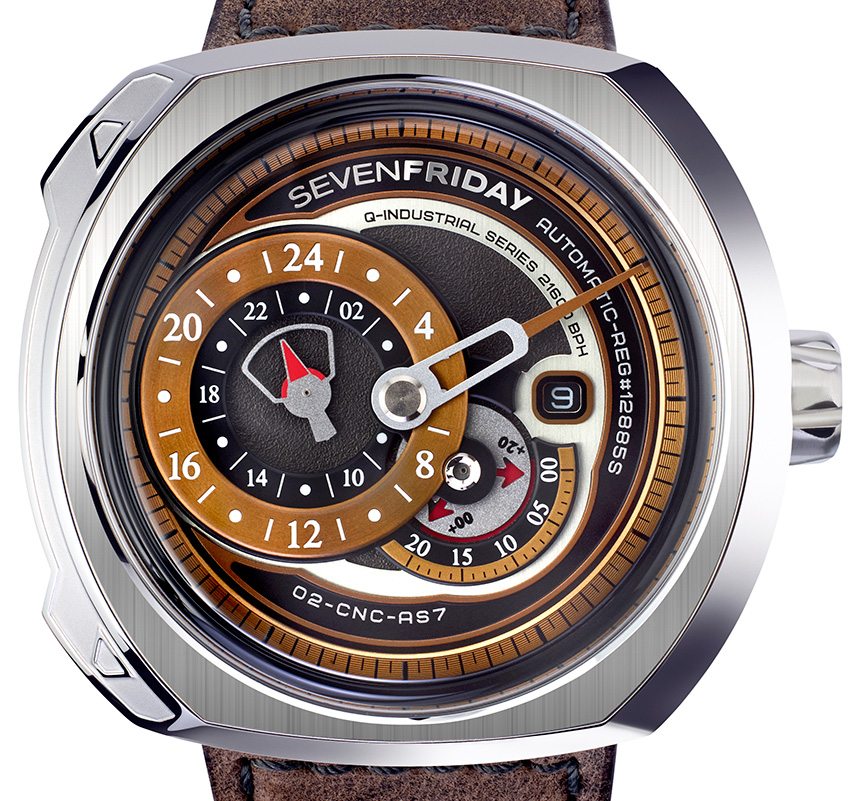 Joining the “Industrial Revolution” family is the SevenFriday Q2/01, and arguably where the Q series really shines, thanks to a series of contrasting finishes and warm, copper-colored dial elements that look like they were pulled straight from the bridge of a steamer in the early 1800s. It also carries the steampunk theme nicely with a brown suede calf skin leather strap with tonal stitching. 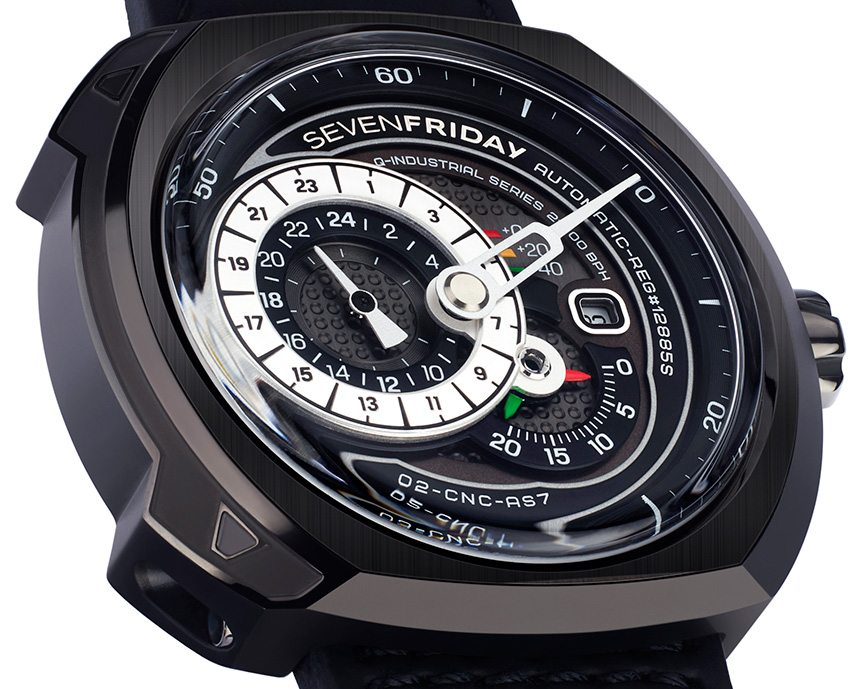 The SevenFriday Q3/01 and its “Industrial Engines” family is slightly more familiar territory for SevenFriday fans. Here, we have a black PVD-coated case and matching dial elements inspired by the engines of supercars racing in the annual Gulfrun in Bahrain. A tachometer-style dial is hardly unfamiliar territory for watch collectors, but it’s still nicely executed here, with the various layers, contrasting textures, and timekeeping discs that never stray too far from the pure, instrumentation feel. 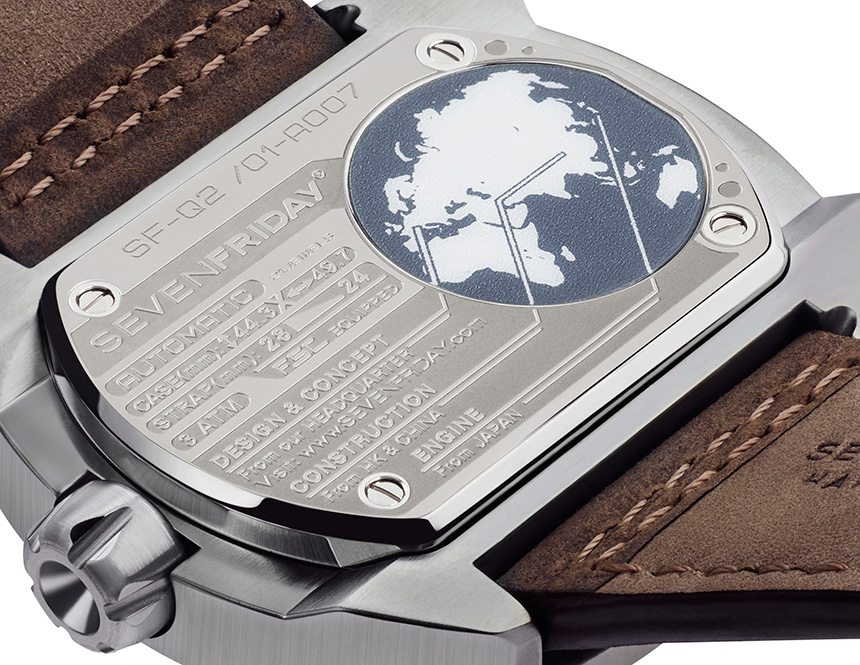 As with the V series, the SevenFriday Q-series includes an NFC chip which enables the wearer to “authenticate” the watch through the brand’s mobile app. Of course, this is the same technology that evolved from RFID and now powers applications like Google Wallet and Apple Pay. But NFC is also the same programmable tech powering many types of household locks (for example), so being able to use your watch to not only pay for coffee in the morning but get in and out of your apartment is an extremely cool prospect. For the time being, though, SevenFriday will offer a mobile phone app where the user can quickly scan the chip and test it against SevenFriday’s database. 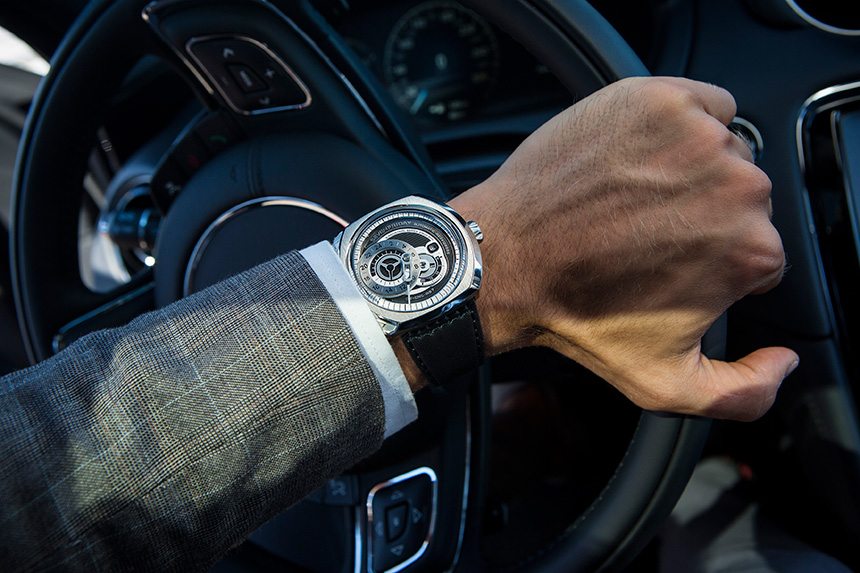