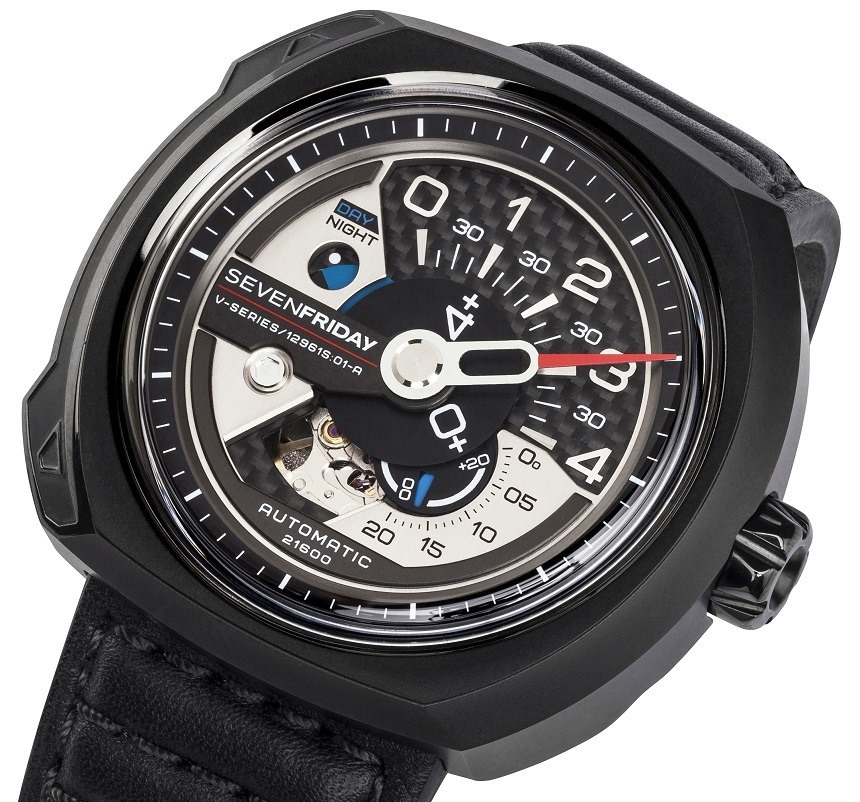 The recent release of the SevenFriday V-Series made a few waves in the brand’s ocean of fans. This is one of the most popular, best-selling, and fastest-growing indie watch brands out there. The original P-Series watches were instantly identifiable, present in evermore retailers around the world, and had a die-hard following (as well as an equally ardent army of detractors, which is always good for generating debate). When SevenFriday débuted the V-Series, I was one of the fans of old left on the fence. I liked a lot of elements about the new watch – the creative – if slightly confusing – hour indicator, the quick-release strap system, and the day/night indicator – but I was seriously concerned that it was too different from the P-Series to be considered congruous with the brand’s original aesthetic. Well, the release of the SevenFriday V-Series V3/01 has gone some way to allaying those fears, but not in the way I might have expected. Put simply, I like consistency from brands. Sometimes, I wish I could break the major maisons down into several independent brands, because the ranges they offer have so little to do with each other they feel ideologically disparate. Omega, for example, is best known for its Seamaster and Speedmaster ranges. Each range is unique enough to justify a stand-alone brand, but at least they are connected by a sporty style. The presence of the Omega DeVille and the Omega Constellation ranges, however, drives me mad. I like the watches very much, but I don’t get a true sense of the brand from them (even though many of the DeVille aesthetics were inspired by early Omega pocket watches, so maybe I should be complaining about the Seamasters, but hey, I’m a victim of timing). And this is my problem with the SevenFriday V-Series. Sensational as this might sound, I believe the P-Series was a classic. It may be despised as much as it is adored, but it will endure. At that price point, with that kind of look, it is set to feature in thousands and thousands of collections over its production run. When stepping out of its shadow, SevenFriday simply had to do something to connect the SevenFriday V-Series to its forerunner. What they’ve done, as evidenced by the SevenFriday V-Series V3/01, is lay out a release plan that follows an identical pattern, with each model of each series taking inspiration from a shared source. With the P-Series we had the P1, P2, and P3, each respectively inspired by Industrial Essence, the Industrial Revolution, and Industrial Engines. This means consumers can expect plenty of variations of each subsequent series that might express some of the DNA we’d grown to love (or hate) in the previous releases. What it means for the guys and girls charged with writing the SevenFriday press releases is that they’ll have to get pretty creative to maintain the hype years down the line. So the SevenFriday V-Series V3/01 is a member of the “Industrial Engines” line, which previously featured the P3 watches. The Industrial Engines line looks to engines, trains, planes, and automobiles for design cues. We can see plenty of nods to these vehicles in the design and layout of the SevenFriday V-Series V3/01. Starting with the ribbed leather strap, which evokes the pattern and materials of a driver’s seat, we can already feel the sense of motion building in this watch. Harvesting the visual link to modern dashboards, carbon effects have been used to enliven the central hour dial. The font and pad-printed integers of the dial reference a speedometer. The brushed steel areas evoke the materials often used for pedals and gear paddles. The day/night indicator around nine o’clock is a cool touch. It adds a bit of color to proceedings. Although there is no way this dial could be described as plain, the masculine color scheme could leave you feeling a bit cold. This watch, as with all SevenFriday V-Series watches, features an NFC chip on the case back. Not only does this allow the watch to be authenticated with the SevenFriday mobile application, it will also enable a number of useful after-sales services that SevenFriday plan on rolling out in the future. The case is 49.7mm wide on the wrist and 11.3mm tall. The strap tapers from an enormous 28mm to a still-chunky 24mm. At those dimensions, this is a serious piece of wrist architecture. You get a lot of presence from the SevenFriday V-Series V3/01 for a price of CHF1,135, but this probably won’t sit too comfortably on the more diminutive wearer. The movement is a Miyota 82S7 with all of the interest focused on the dial layout, which boasts 4 levels, galvanic hollowed-out plates with alternate finishing and carbon effect pattern. The hour indicator seems initially complex but only requires a simple calculation (just add the most central number to the number on the outer scale at which it’s currently pointing). This complication will no doubt split opinion. I could personally do without it (I like telling the time to be straightforward), but I think the effect and idea are interesting nonetheless. The multi-level dial is displayed behind a domed, anti-reflective mineral glass. With a paltry 30 meters water resistance, this watch pegs itself as a show-piece, rather than the action tool its styling might suggest it to be. The SevenFriday V-Series V3/01 is delivered in a cool wooden crate and is available now. sevenfriday.com